The EX950 faces stronger competition in this capacity. The new 970 EVO Plus increases performance from the South Korean camp, and the limited parallel reads and writes from fewer die decrease performance from Micron 64L drives.

The 512GB EX950 performs really well in the sequential read test. Only the new EVO Plus gets close to the EX950's queue depth (QD) 1 read performance is close to the EX950. The SM2262 drives do outperform the new models in QD2, but the EX950 walks away from them at QD4 and above. In the 2TB and 1TB classes, the EX950 blasted past the Samsung 970 EVO in the sequential write burst test. The 512GB EX950 doesn't dominate in this test like the other capacities. The drive still shows strong performance, but falls down to third in the QD2 chart. The sustained write test shows how much data we can write before the SLC cache fills and the drive has to either reply on folding data to the TLC, or writing directly to the TLC area.

The 512GB EX950 uses programming and firmware to write sequential data at a higher rate, and for longer, than the model it replaces. The drive actually writes as much data to the SLC area as the ADATA S8200 that uses a lot of overprovisioning (reserved spare area that the user doesn't have access to). Until the release of the 970 EVO Plus, the HP EX950 would have the market covered in random write burst performance. The two drives show just how dominant they are in this area and hit the ceiling of what's possible with a single CPU core writing 4KB blocks through a PCIe 3.0 x4 interface. The 70% read sequential mixed workload test shows the weak point of the EX950 series. The SM2262EN controller paired with Micron 64L flash memory doesn't scale performance well when asked to read and write sequential data. To be fair, the combination delivers right around 1,100 MB/s consistently and that's a solid 3x to 4x over what most SATA SSDs can achieve.

This is a very specific workload outside of what most of us do with our PCs. To better explain this test, it's the same as reading 7 parts of large block size data, and writing three at the same time (that would be QD10). At lower queue depths, the reads and writes vary more. This type of workload often comes up with audio and video editing on a professional scale. The 70% read with 30% write random mix is more consumer focused. This is the standard "workstation" workload (80% read is closer to a consumer workload according to Intel, but less conventional for published performance testing).

The 512GB EX950's strong random read performance allows the drive to dominate this test at usable consumer queue depths. On the next page, we will look at application performance and be able to point back to this, and the 100% random read test, to explain why this drive is very fast with applications. 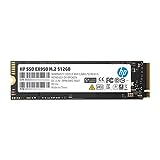