While we have already covered the G.Skill TridentZ Royal in its dual channel form, we were still left with a dilemma. We liked the memory so much, we just had to have enough of it to run in our daily driver and peripherals test rig. The sad thing was that at the time of the first review the F4-4000C17D-16GTRS were not yet available.

The only choice we had was to go back to G.Skill and humbly beg for another set, and to our shock, they were more than willing to help us out with the request. Since we have enough RAM for quad-channel testing, we figured why not give it a go.

Of course, mixing a pair of two stick kits is not likely to produce the same level of compatibility and functionality as a set binned for quad-channel, but we were willing to give it a go anyways. G.Skill had even explained in our communications, that they might not play well together, but we had to take that chance for multiple reasons. One of them, and most importantly, is to check the IMC of our test rig. While we have pulled off 4000MHz with a set of Corsair LPX memory, the timings were nowhere in the ballpark of what G.Skill offered us.

Keeping in mind that we could run into issues, and that the XMP profile may not even show us any joy, we had to take a stab at it, and we are here now to explain what it is that we could do, and the performance afforded to us using the TridentZ Royal 4000MHz kit with 17-17-17 timings. While we do not expect to overclock this kit without more tuning that we use as our standard method of testing, we will still attempt to do our best and see what shakes. 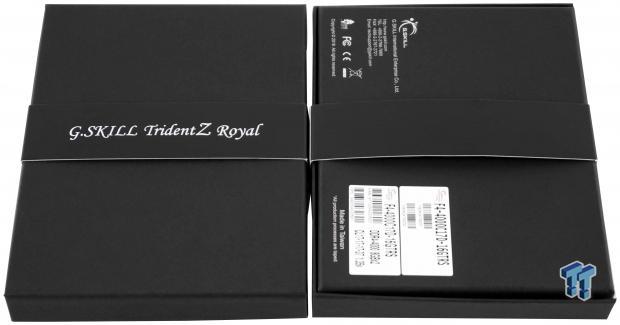 Again, while not advised to do what we are attempting, we now have two matching sets of the TridentZ Royal in silver. The presentation is excellent, from the initial impression to the first glance of the highly reflective heat spreaders when it is opened, even down to the inclusion of a cleaning towel to keep dust and fingerprints at bay. 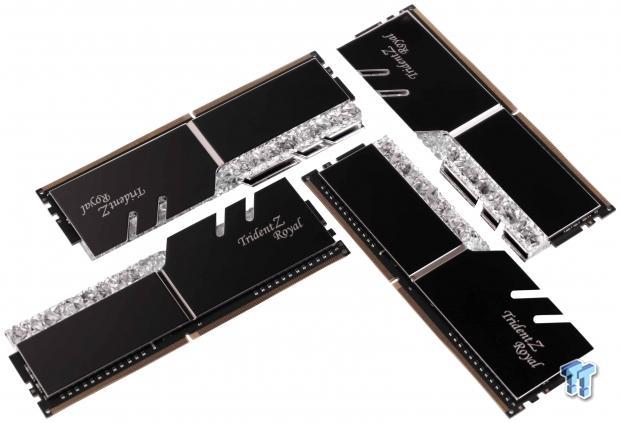 Without using a black panel from a chassis to cover the white photo booth, all of the detail was lost, and is why the TridentZ Roayl appears so dark. The aluminum heat spreaders are highly polished, with the name engraved into them. Black PCBs as the base, the option of gold or silver, and that fancy light bar all converge to deliver the sexiest RAM on the market today. 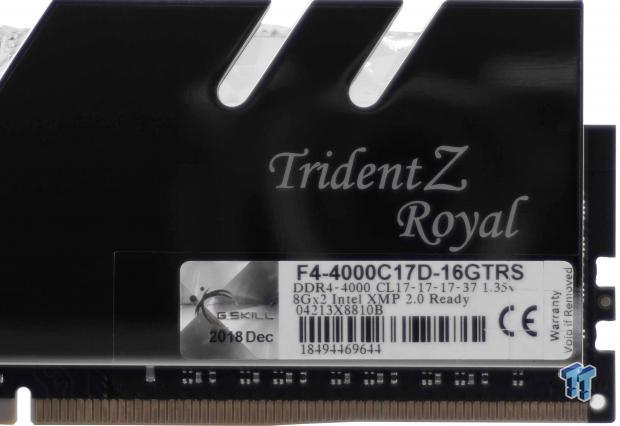 The reverse of each stick has the shiny spreader and the engraved name, but there is also the product sticker. Outside of the variance of the serial numbers at the bottom, both of our F4-4000C17D-16GTRS kits are shown to run at 4000MHz with 17-17-17-37 2T timings, using 1.35V with XMP applied in BIOS. 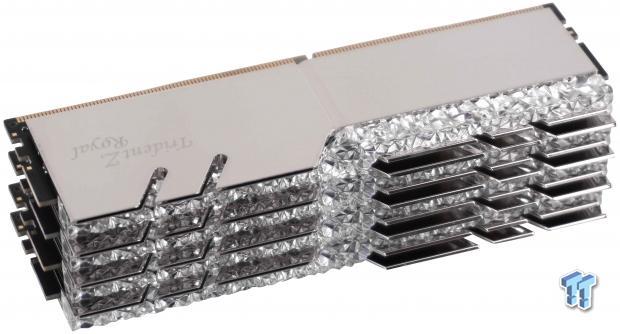 While reflective heat spreaders are one valid reason for wanting this memory, it is the crystalline light bars that take things over the top for us. Using clear plastic rather than the opaque stuff fount of TridentZ RGB, the LEDs are brighter here, and with all of the shapes and angles, the lighting effect delivered is the best we have ever seen in action. 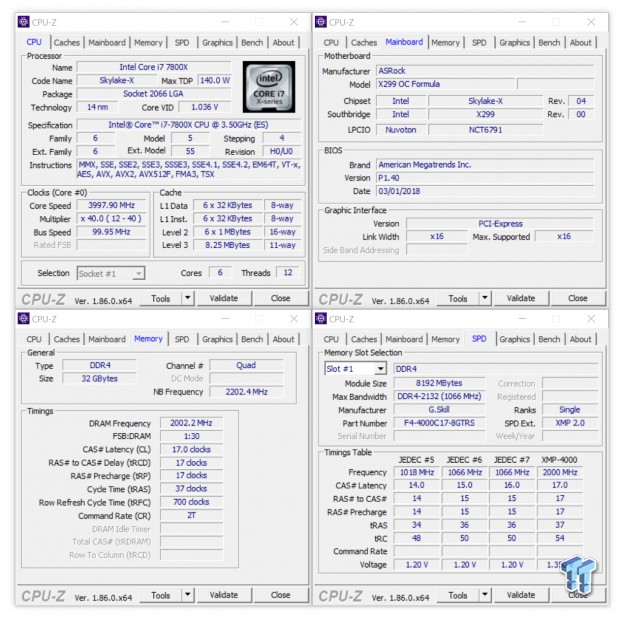 After installing the TridentZ Royal into the AsRock X299 OCF motherboard, we went directly to the BIOS and applied the XMP profile. After two loops of memory training, we got into Windows at the specified speed and timings. We are showing 4004MHz with 17-17-17-37 2T timings. Going back to the BIOS to look at voltages, VDIMM was set to 1.35V while the VCCIO and VCCSA were both set to 1.25V.

While getting the kits to play nice and run with the XMP profile enabled is excellent, we were not able to make any changes that were stable. We did see 4200MHz in windows, but all testing failed or caused a BSOD. When it came to looking to reduce the timings, none of the changes we tried got us into Windows, even when attempting to use 1.45V to the RAM and 1.35V for the IO and SA. 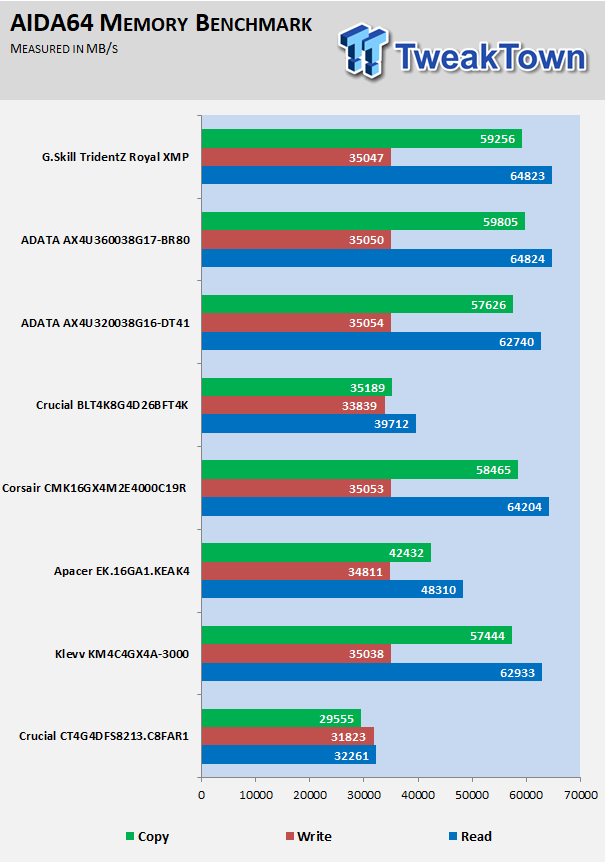 Second to copy to the XPG D80 modules, but the Royal RAM hammers on the Corsair kit. The write speed is not a great indicator, as most of the results are pretty close anyway. Read speed is two ticks out of first place against the XPG D80s, but again is faster than the other 4000MHz kit in the charts. 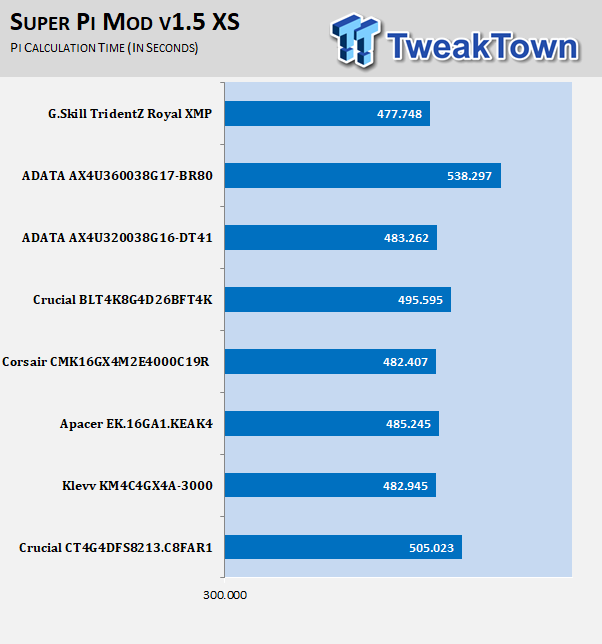 Switching over to Super Pi to get a feel for how fast it can complete calculating Pi to thirty-two million digits, the G.Skill TridentZ Royal handily beats everything we have tested. While the D80 showed better throughput in the last chart, a very different picture is painted here. The lower timings of the Royal memory also makes it 4.6 seconds faster than the Corsair LPX. 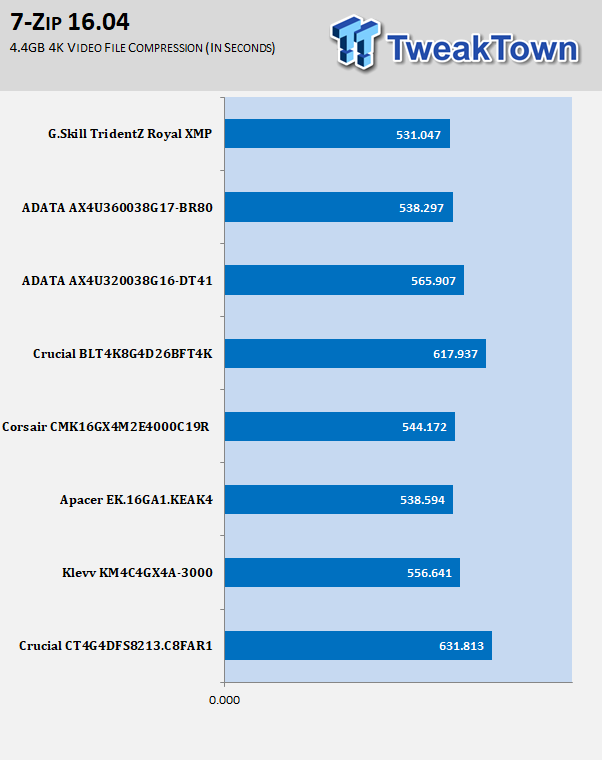 Since we are using 32GB of memory, it only makes sense for something like a render test to come into play. Using 7-zip, the TridentZ Royal is more than seven seconds faster for every 4.4GB of compression done. In the realm of 4K video, and the huge file size associated with a raw video, using the Royal DIMMS will increase productivity beyond anything else we have tested on the X299 in quad-channel.

Even though we knew we were up against the odds when it came to tinkering with this memory beyond the XMP profile, but we are no less impressed. If the TridentZ Royal wasn't attractive and unique in a market where many products look similar, there is the superior performance to appreciate as well. While AIDA64 did not show the Royal as the supreme leader, it is still a very close second.

When it comes to calculations and rendering, the Royal steps up and takes the top of the charts. Of course, every IMC in the full range of X299 compatible CPUs may not get to 4000MHz, but with the right luck on your side, you can see it is possible. If you do know the limit of your IMC, the G.Skill TridentZ Royal memory can still cover your needs. With speeds as low as 3000MHz and capacity that seems to be ever increasing, it is easy to find the right set for your needs.

While we allowed the motherboard to control the memory illumination, there is the option to grab the TridentZ RGB software to take full control of the RGB LEDs. While color matching the LEDs to a system is cool and all, initial impressions are everything, and the default rainbow effect of the RGB LEDs is where it's at. As you can see in the image above, the more of it you stack together, the better it looks, as the colors evenly blend from purple to blue, to green, and even a hint of yellow at the bottom.

We also like the effect of the highly polished heat spreaders, as at the top, they help to reflect the light, and on the sides, they reflect bits of the motherboard. While they may cost a bit more than the average kit, you have to admit that the TridentZ Royal upped the game for all RAM makers, and with the options for gold and silver, we have seen some seriously sexy builds coming together on social media with these kits.

Checking at Amazon, we do see a lot more of the TridentZ royal memory listed, but sadly the CAS17 4000MHz kit is not one of them. However, we were able to locate them at Newegg, and it appears that our original guess at pricing was a touch low. We found the 16GB kit we tested previously, and here now in quad channel, and the price at Newegg is $329.99 per kit, for a whopping total of $659.98. There may be a deal to be had once densities of their offerings improve, but at this time, this is the only feasible way to get your hands-on this much of the F4-4000C17D-16GTRS, as no 32GB kits of it are out yet.

There is no way we can try to spin it so that you might think there is an excellent value to doing something like this, but in the context of those who pay up for the best, or want to make an investment so as not to have to spend as much time rendering, there is merit. At the same time, we feel that G.Skill has cornered the market on amazing looking RAM, in the system, or even just in the box, and they should be able to charge more for being the ones to develop the most amazing looking DDR4 on the planet. For the average guy out there, you would be much better off with something else, but for those of us out there with the need to have the latest and greatest of bleeding edge gear, you need not look any further.

The Bottom Line: The TridentZ Royal is amazing to look at out of the box and it gets even better once in the rig. It deals out some of the best performance we have seen in quad-channel memory. However, to obtain these sexy beasts, you will have to dig deep, as they are not cheap!