ADATA is the first to release a high-performance SSD using the new Silicon Motion, Inc. (SMI) SM2262EN controller. Being first isn't always the path to being the best in the long run, but this is the latest technology available and the best you can get today. 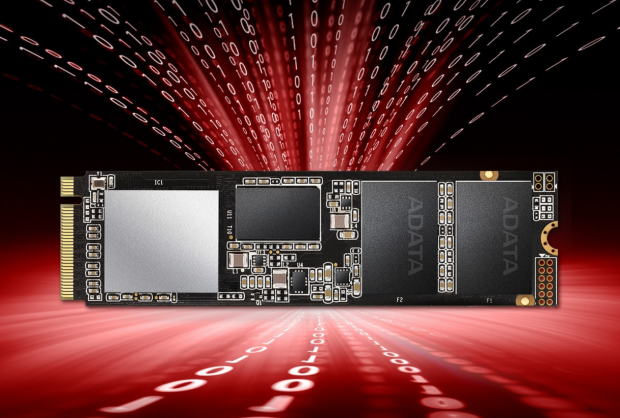 ADATA seems to have jumped the gun. The SMI SM2262EN controller was to accompany Micron's upcoming 96-layer TLC memory. We fully expected to see retail products in January with the new memory but supply may be limited. To roll out a new and faster SSD for early 2019 ADATA took the timetable by the horns to build a hybrid that increases performance over the most popular SSDs released in 2018.

The series ships in 256GB, 512GB, and 1TB capacities during the initial rollout. A large 2TB model will come to market in early 2019, but we don't have the full specifications for that model yet. You may have missed it since we breezed by so fast, but the SX8200 Pro doesn't use the same overprovisioning as the previous generation. When you buy the 256GB model, you get it all and not just 240GB.

As previously mentioned, this is the first retail SSD to use the new Silicon Motion SM2262EN with an improved hardware data path over the previous generation SM2262 used on the original SX8200. The new controller carries over several important, but highly technical, features like end-to-end data path protection, LDPC, and internal encryption. The takeaway is the new EN version of the controller is faster thanks to what Silicon Motion calls an "improved data path" and firmware optimizations.

The new SX8200 Pro doesn't use 96-layer Micron TLC, so there isn't a price drop for shoppers. Instead, the SX8200 Pro series taps Micron's 64L memory that is currently unmatched in random read performance, at least with retail consumer products shipping today. 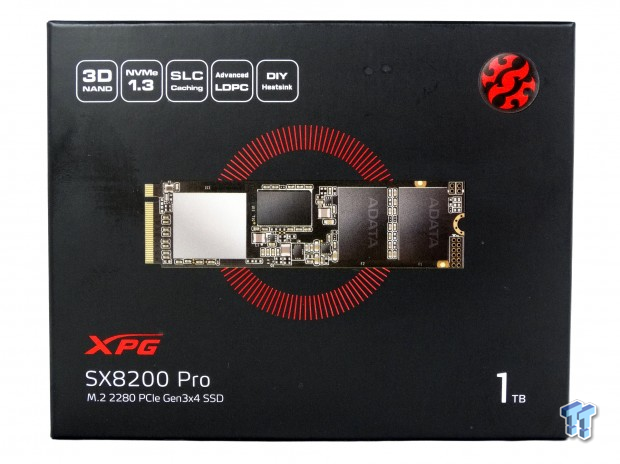 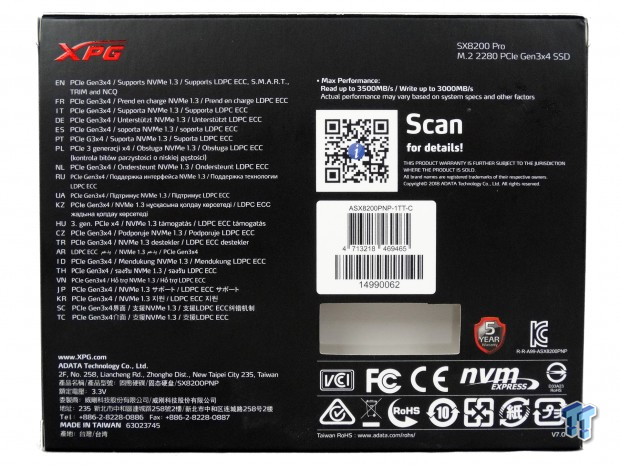 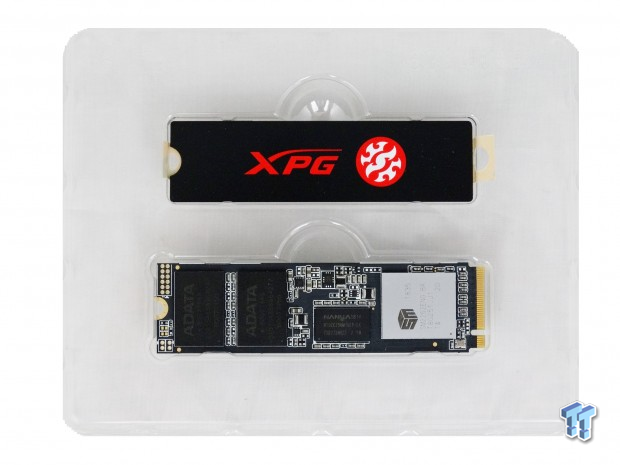 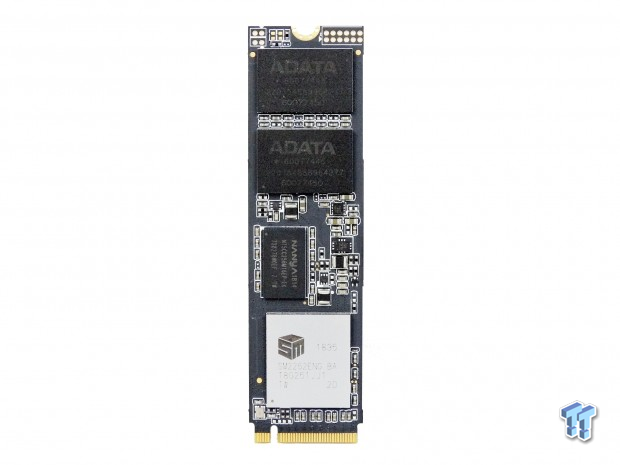 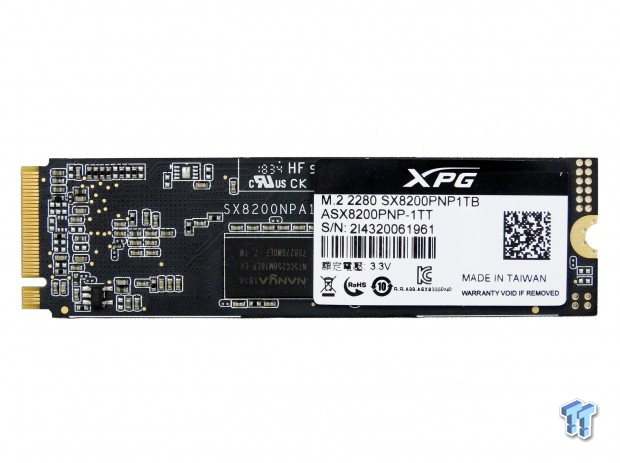 ADATA features some information on the drive's package but the reality is most will ship from Amazon, so it's a moot point. 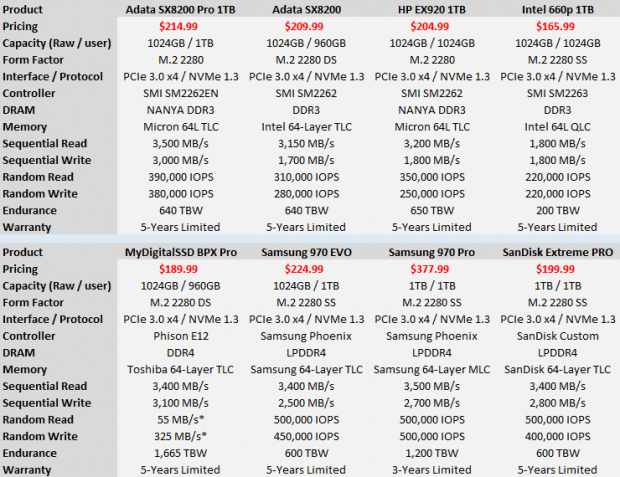 We turned to the most popular consumer NVMe SSDs available today to test against the new ADATA SX8200 Pro 1TB.

There are a few side stories that will play out in the testing portion of this review. The first and most obvious is the performance between the SX8200 that the SX8200 Pro replaces. The second is how close the SX8200 Pro gets to Samsung's 970 Pro, the last consumer SSD with MLC flash. Finally, we have one of the most important comparisons for shoppers, how does the SX8200 Pro perform next to the MyDigitalSSD BPX Pro that costs $25 less and carries a massive 1,025 TBW endurance advantage. 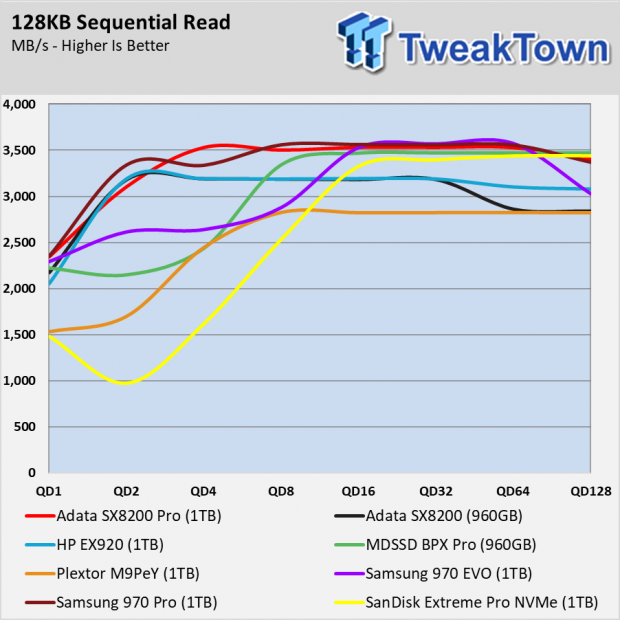 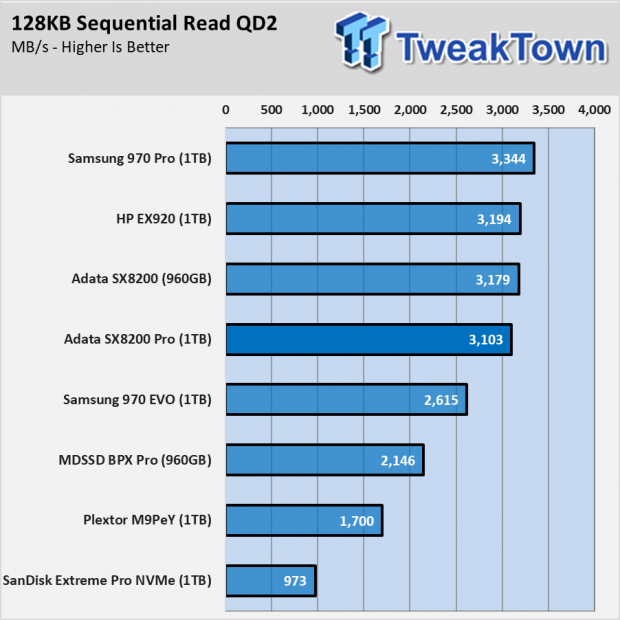 The new 1TB SX8200 Pro scales with sequential reads really well. The drive reaches peak throughput faster than the Samsung 970 Pro, and both deliver just over 3,500 MB's. This is an improvement over the older SX8200, but both drives show similar ramp up to queue depth (QD) 2. The new Pro model does have a slight advantage in at QD1. 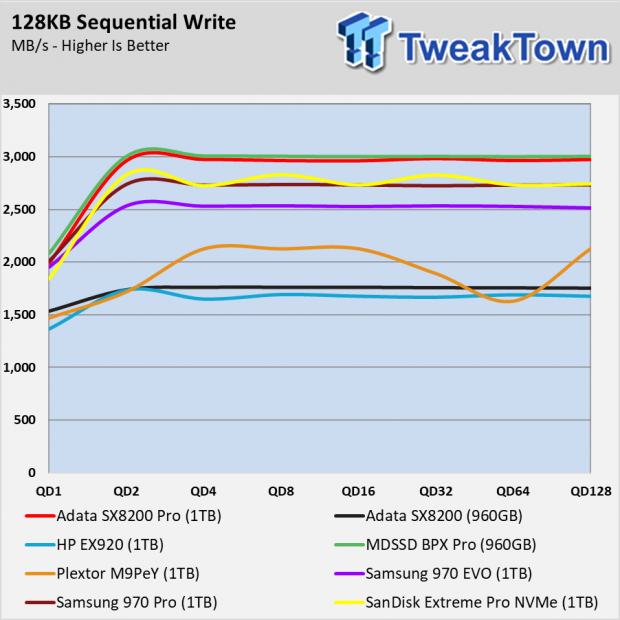 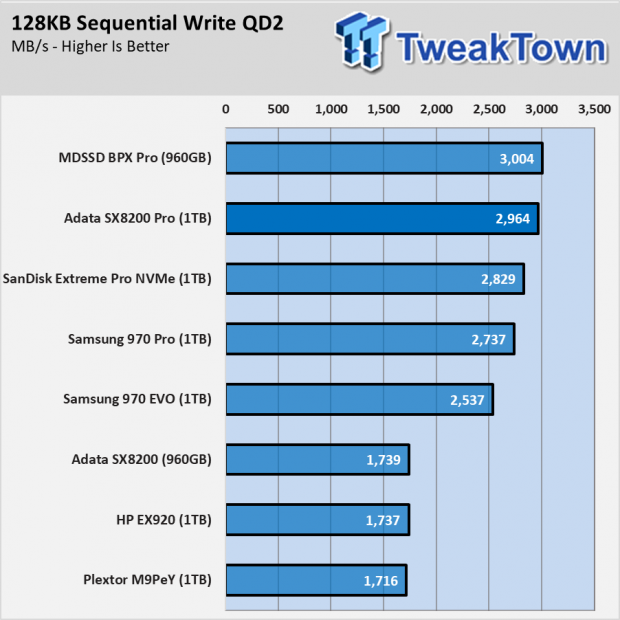 The Samsung 970 Pro hasn't been the burst sequential write leader since the MyDigitalSSD BPX Pro came to market. Even the WD Black NVMe/SanDisk Extreme Pro NVMe overtook Samsung's prosumer drive last year. The SX8200 Pro matches the BPX Pro step for step in this test. The two drives walk away from the pack at all queue depths.

The sequential burst write performance a massive improvement over the older SX8200 here. 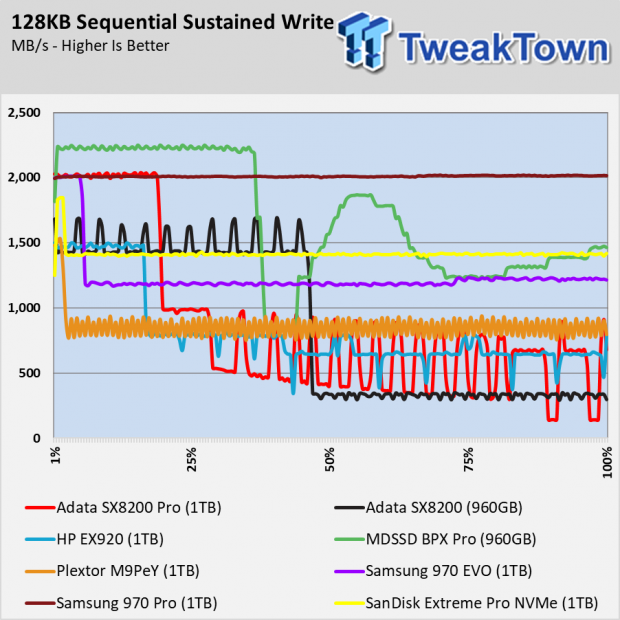 The drive still uses 3-bit per cell flash, and without a massive spare set of blocks from overprovisioning, the technology doesn't exist yet to stop the TLC roll off. The SX8200 Pro uses a dynamic buffer that shrinks as you put more data on the drive. The SLC provides a 500 MB/s performance increase with sequential data over the previous model, but it comes at the expense of a smaller overall duration of writes. 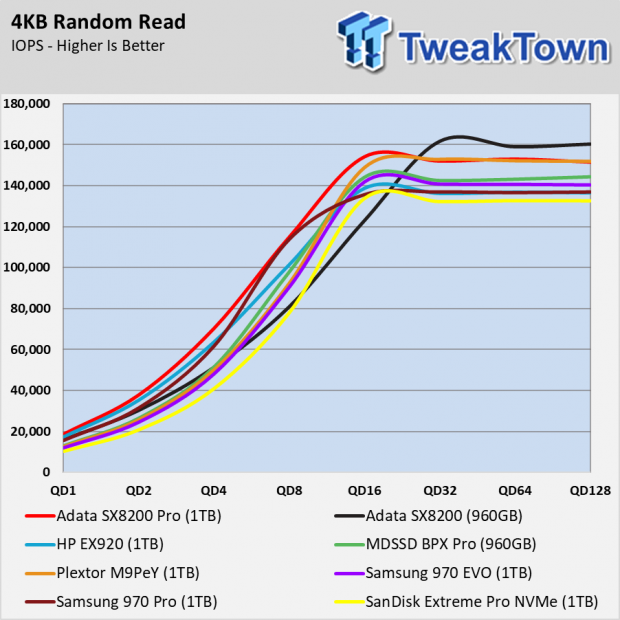 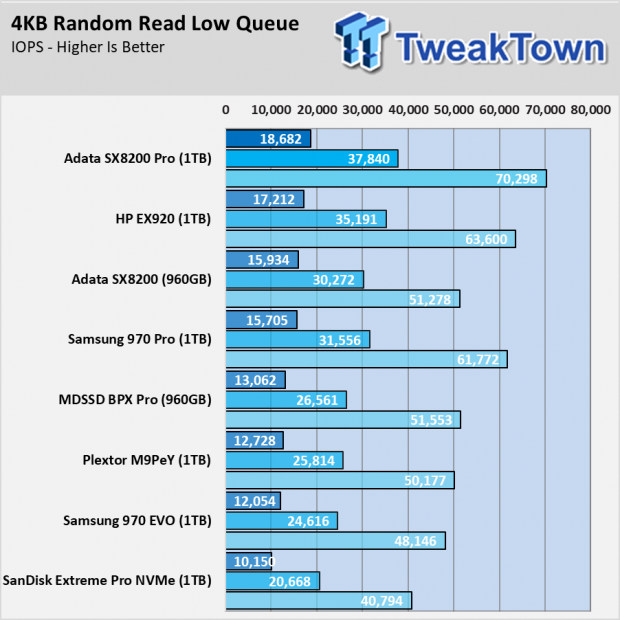 We've preached about the importance of low queue depth random read performance in nearly every review. In this test, we see how the new SX8200 Pro leads the other drives in this area. The drive should perform extremely well in consumer applications. We will look at those on the next page. 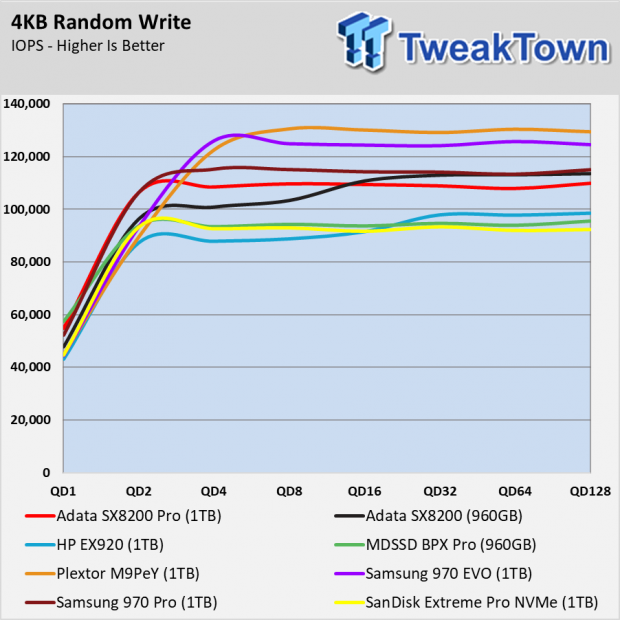 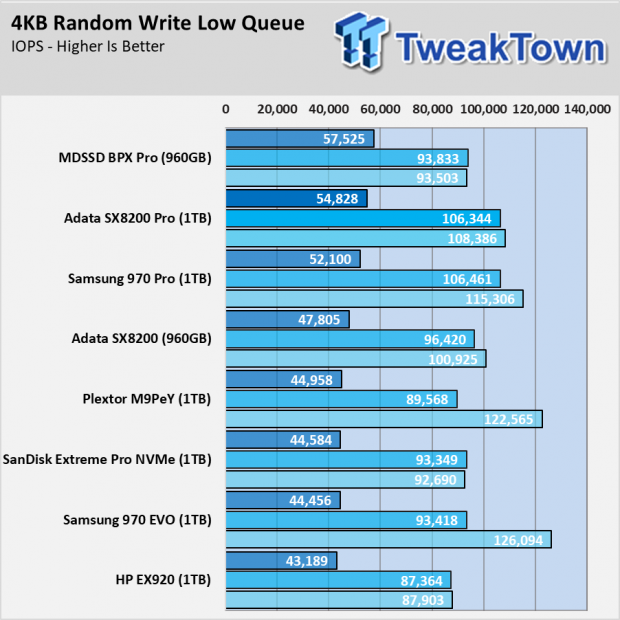 The new Pro ramps up the random writes quickly but hits a plateau at QD2 with right around 110,000 IOPS. Some of the other drives scale a little higher but need more queue depth to get there and start with lower performance at QD1. 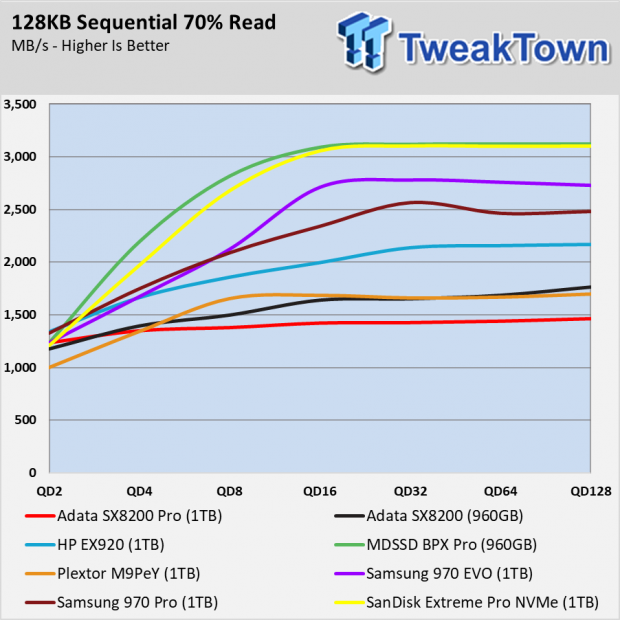 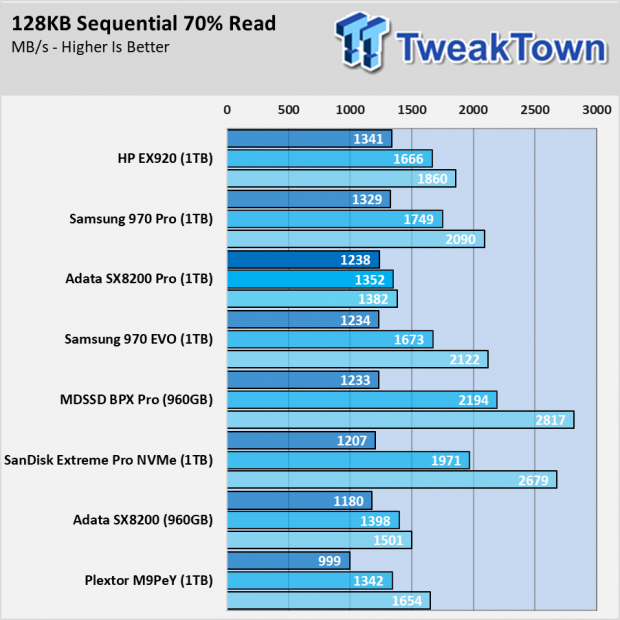 Until this point, the 1TB SX8200 Pro has performance nearly perfect. There are some opening in the armor of Silicon Motion's controllers. The weak point in sequential mixed workloads when moving more than a few media files at a time. The drive does really well with one coming and going but fails to scale as you pile on the workloads, like processing two movies at the same time with an application such as IMG Burn that reads and writes the data during the processing. You get the same disk throughput per as you would with a single operation. You would need a very powerful multi-core processor to churn data at a higher rate than 1200 MB/s. 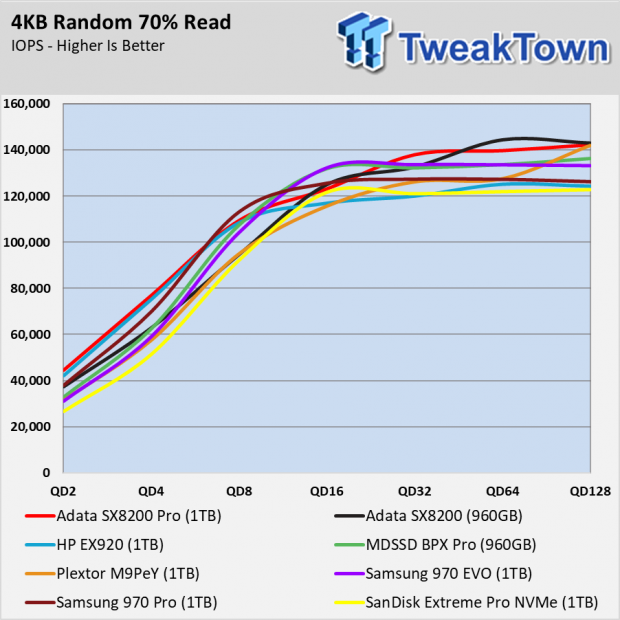 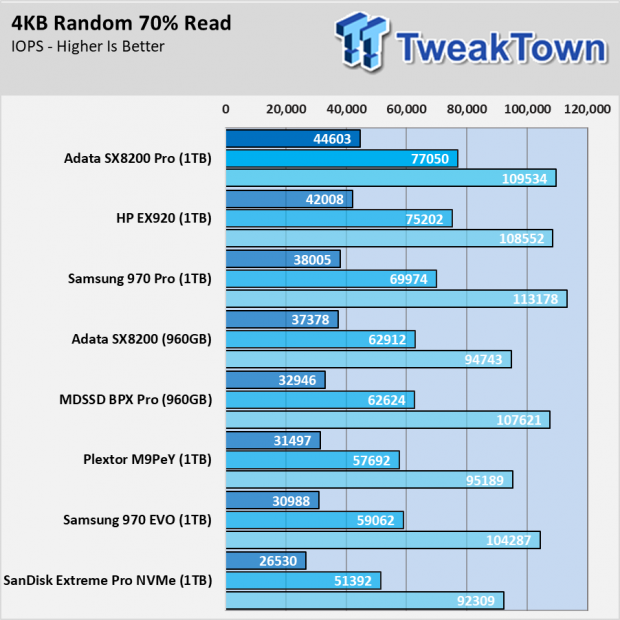 The drive doesn't have any issues with the small block size random data mixing. The large performance increase in random read speeds allows this drive to surpass everything else on the market today and that will lead to very strong application performance on the next page. 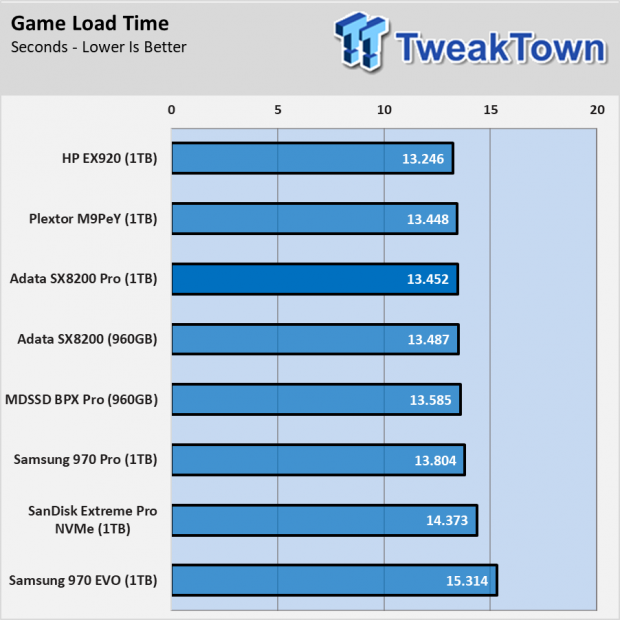 Given the random read advantage with this drive, we fully expected it to dominate the game load-time test. The drive performed very well but didn't manage to surpass the record time set by the 1TB HP EX920 for a flash-based device.

You may wonder where HP is in the SM2262EN race, and we have an answer. HP released the first SM2262 in February of 2018, but it will be a few more weeks until the new EX950 comes to market. We have to wait and see if HP's proprietary optimizations hold up with the new generation and if the company brings 96L memory into the equation. 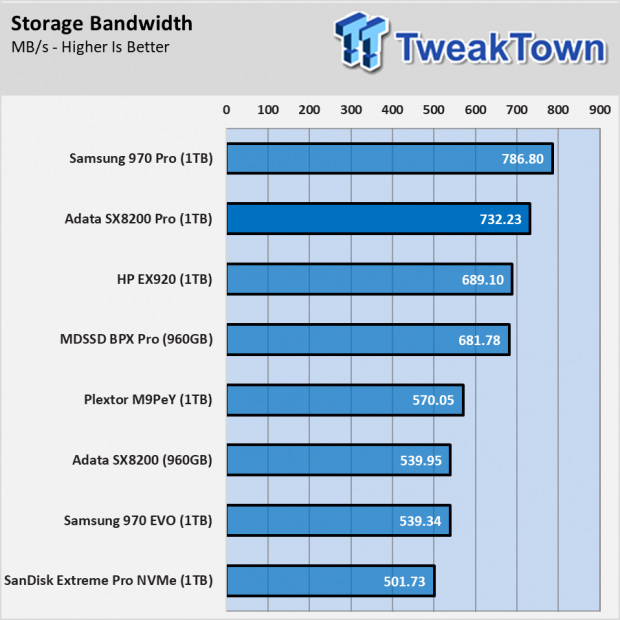 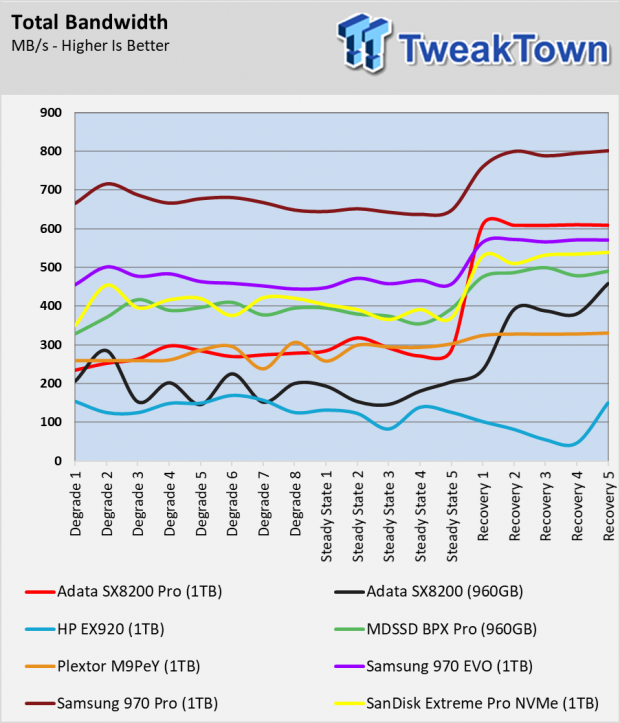 ADATA has increased the performance under heavy workloads. This was always a concern with the SM2262 drives. The lower performance under workstation-level workloads kept the SX8200, EX920, and Mushkin Pilot firmly planted in a consumer SSD role and not a particular good option for more intensive tasks. The new 1TB SX8200 Pro sees a decent performance increase over the model it replaces, but still comes up short to the two Samsung NVMe drives. 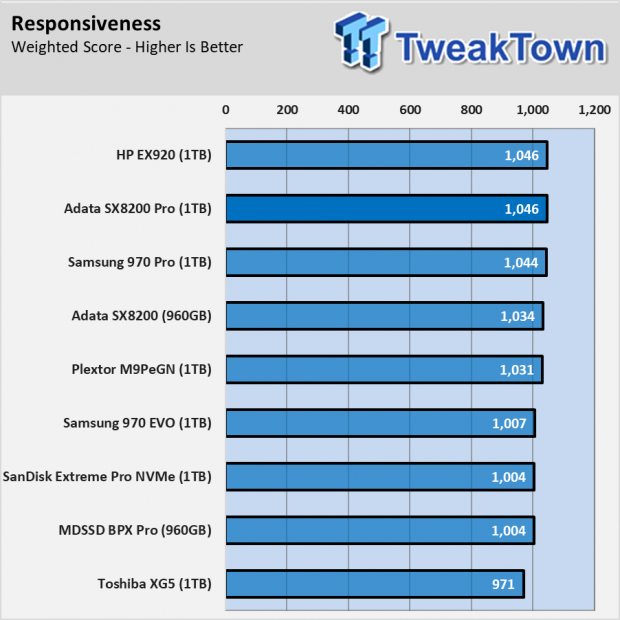 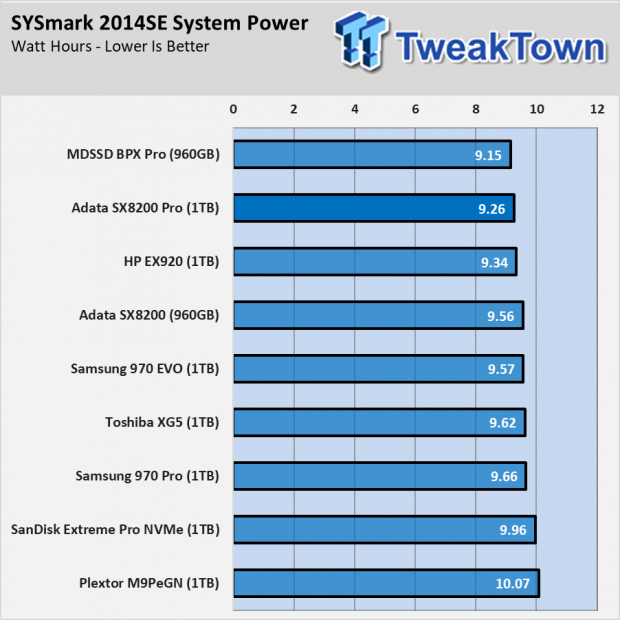 The 1TB SX8200 Pro is the first flash-based drive to match the HP EX920's office-workload responsiveness score in the SYSMark 2014 SE test. The drive manages to meet the high bar set by the EX920 and get there using slightly less power. 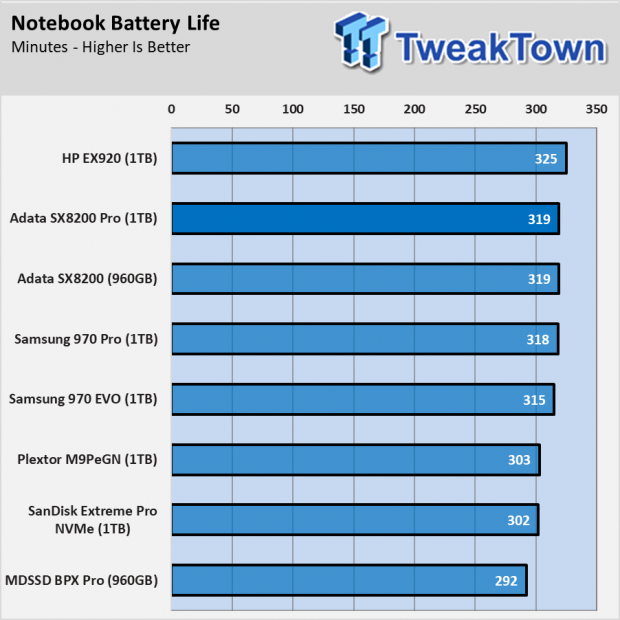 The power saves are not enough to extend notebook battery life. This is the downside of heavy caching; it often takes more power due to the processing involved with folding the data from the SLC areas to the TLC area for long-term storage. Still, this drive matches the previous generation, so users don't give up any battery time.

ADATA's tagline for this model is Level Up With Incredible Performance. The new SX8200 Pro, at least the 1TB model we tested today, is a leap from the previous generation. The difference is a lot like Samsung's EVO line to the Pro line. The potential for a better user experience is there, but you have to have the workload to take advantage of the performance. 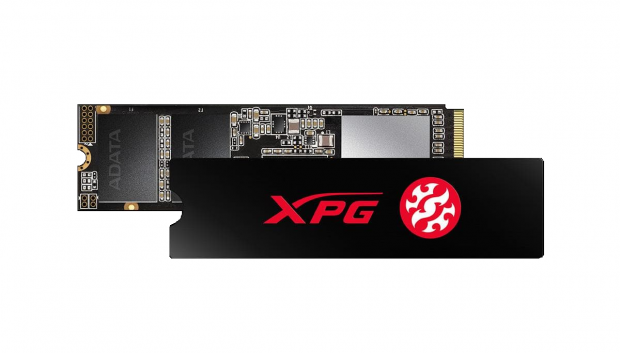 The SX8200 Pro gives us that sweet 18,682 random read performance so right out of the box users will benefit. That's twice the random read performance of the best SATA SSDs and a three times more than the average. In real-time, that's maybe a second or two shaved off a game load screen but it's not like we count the seconds that tick by when a game loads. You will notice a more responsive experience when opening applications, opening folders, and doing just about everything that reads from the boot drive. You don't have to hunt for applications that benefit from the high random reads.

If you goal is to increase performance in multimedia functions, like our example of using IMG Burn to change the file type of a movie, the high queue depth 1 and 2 performance will increase as well. This is really one of the fastest drives we've tested for general computing other than anything with Intel's Optane technology. That said, this is still not a perfect choice for workstation use. The Silicon Motion NVMe controllers continue to increase heavy workload performance, but it's not there yet. You do have to write a lot of data, more than what I normally write every day, to see the performance drop off.

We're surprised with ADATA's pricing for the SX8200 Pro. I'm not complaining! The 1TB model is only a few dollars more than the model it replaces but will have to compete with for a limited time. The price difference is so close on the 1TB models that we don't even differentiate the two. ADATA could have justified a $50 price increase for the Pro but didn't, and we like it that way.

If I were buying a 1TB SSD today there are only two models I would consider. On the lower-end of the budget comes the MyDigitalSSD BPX Pro (and Corsair Force MP510 if you can find it), and the drive we tested today. If you can space the extra $25 go for the SX8200 Pro with class-leading random read performance and an impressive notebook battery life score that may become useful over the time you own the drive.

The Bottom Line: The ADATA SX8200 Pro 1TB is one of the best available today. If you want snappy performance, excellent load times, and expect to keep some money in your pocket this is a great option.