Intel's high-end desktop processors are getting an upgrade today as Intel launches the 9980XE and we assume other 9th generation X-series processors. Lower-end SKUs in the X-series family are getting PCI-E lane bumps, as well as solder thermal interface material and frequency bumps. 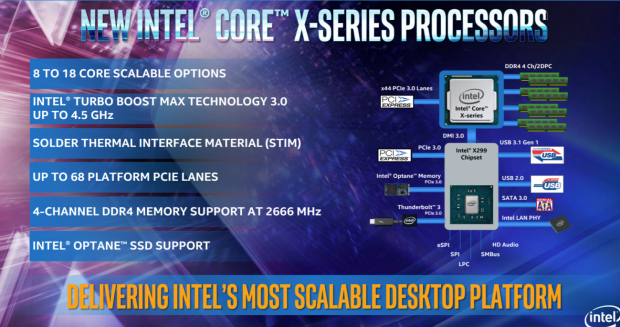 These improvements are pretty much what people wanted in the original X-series of CPUs, which were 7th generation processors. The funny part of all this is that the stepping and family are the same between the 7th and 9th generation X-series CPUs, at least when it comes to the 9980XE. Let's see what the 9980XE has to offer over the powerful 7980XE.

The new CPU uses solder based thermal interface material, so that's partially how Intel is reaching those frequency increases. There is one interesting difference; Intel has reduced Tjmax from 94C to 84C for the 9980XE. 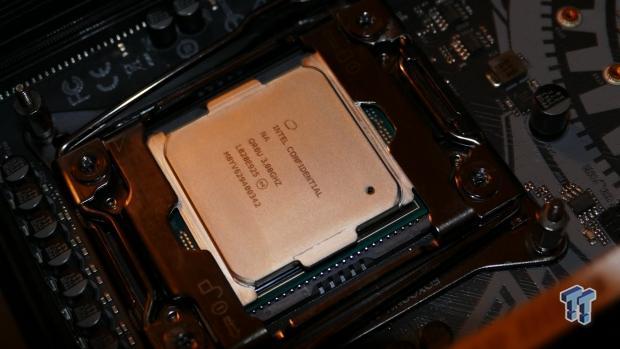 Our CPU was delivered in a tiny ESD protected black box as Intel typically does. The CPU looks just like the 7980XE and has the same RFID chip in the upper right corner. If you look closely you will see a hole in the top of the heat spreader; this hole allows the heat spreader to expand and contract with temperature. 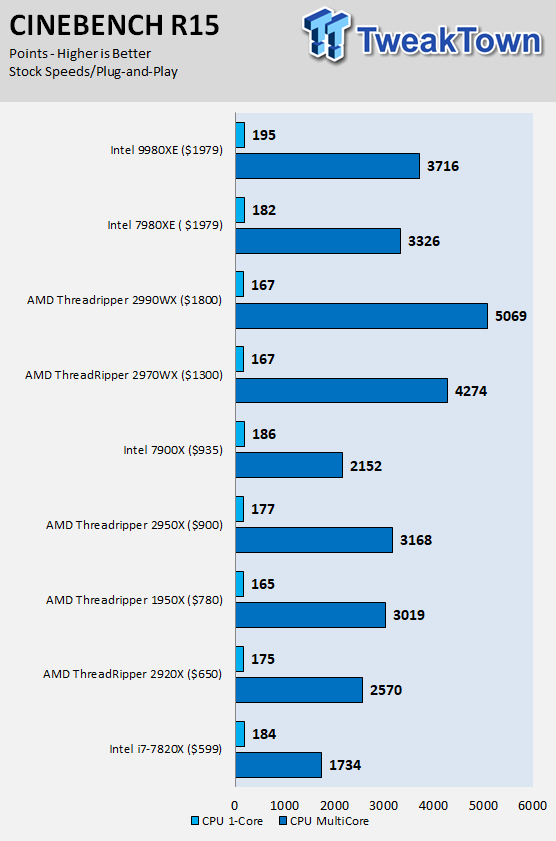 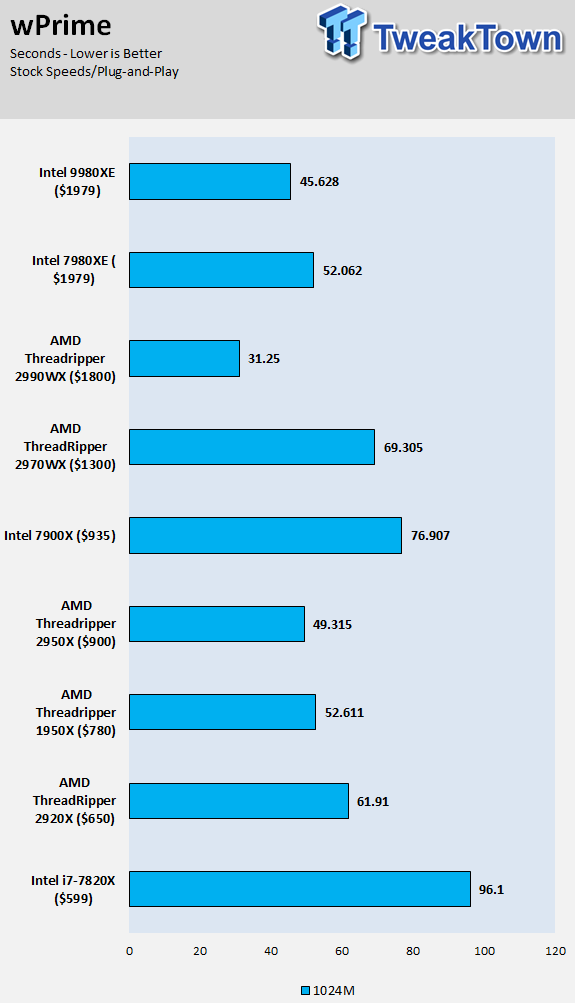 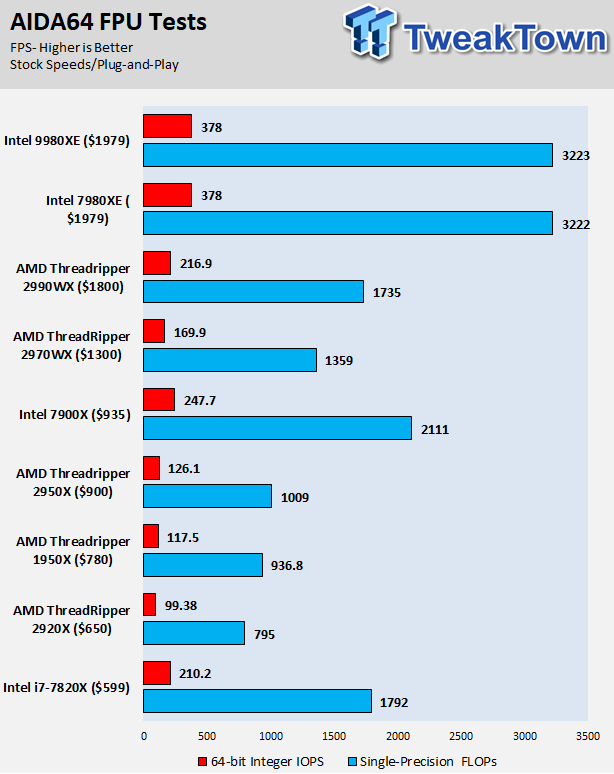 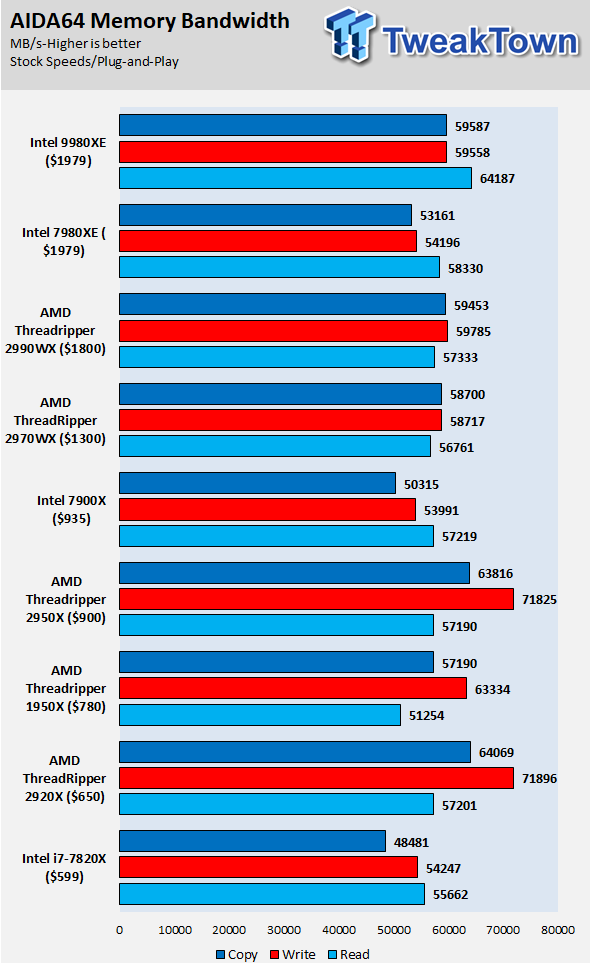 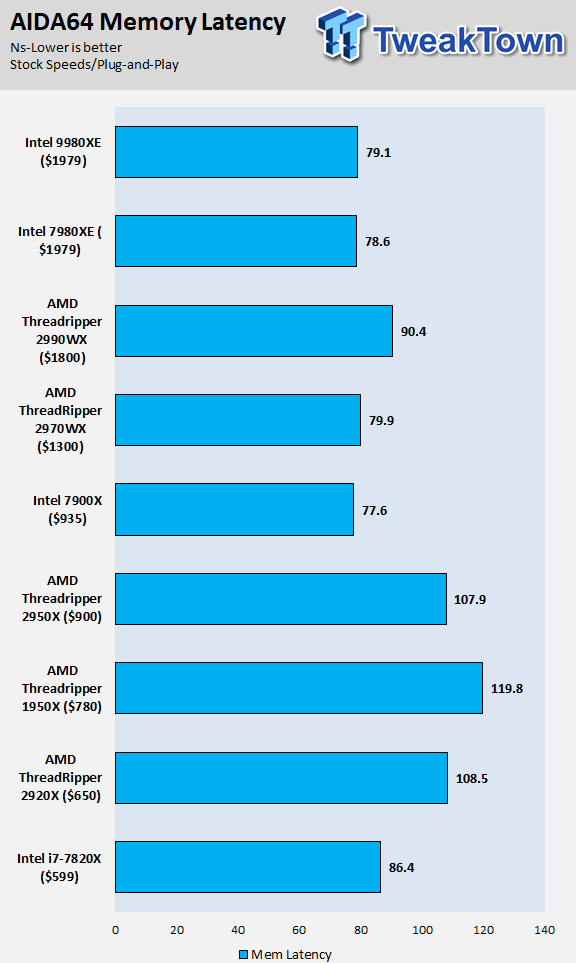 We see some small increase in nT CINEBENCH due to the increase of 400MHz in all 18-core turbo, and we see a margin increase in single core due to Turbo Boost Max 3. In wPrime, we see the same all core boost result in a better time. AIDA64 FPU tests are very interesting, there seems to be no change, it might be because it's a workload without much of a difference, but numbers were pretty much the same. In AIDA64 memory we see some changes, but those could be motherboard dependent. Memory latency is unchanged as well. 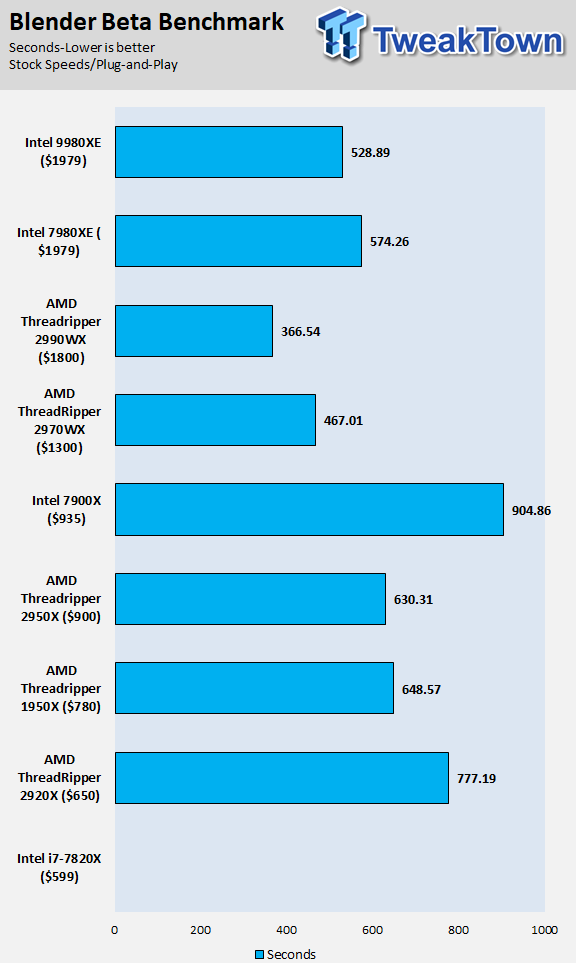 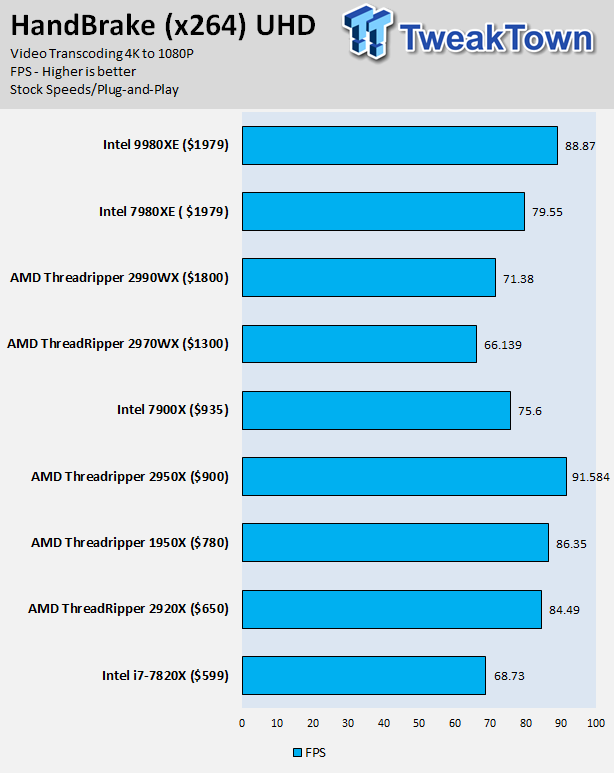 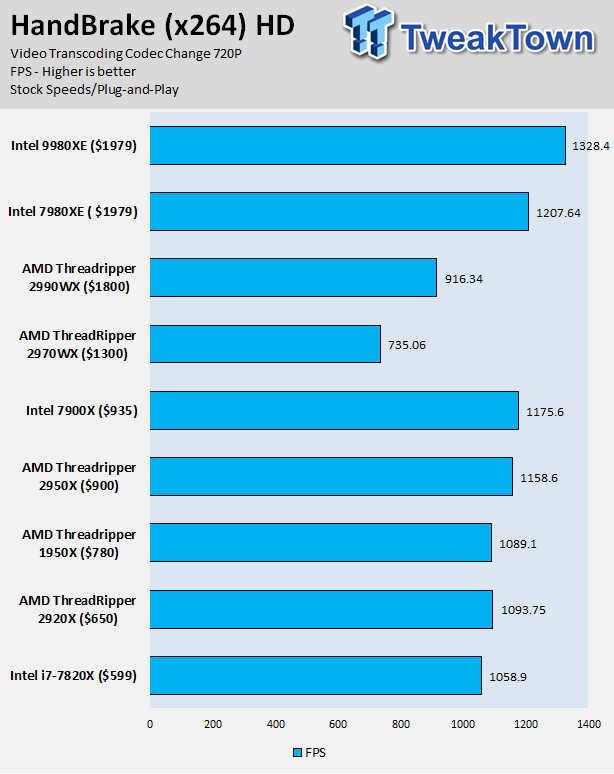 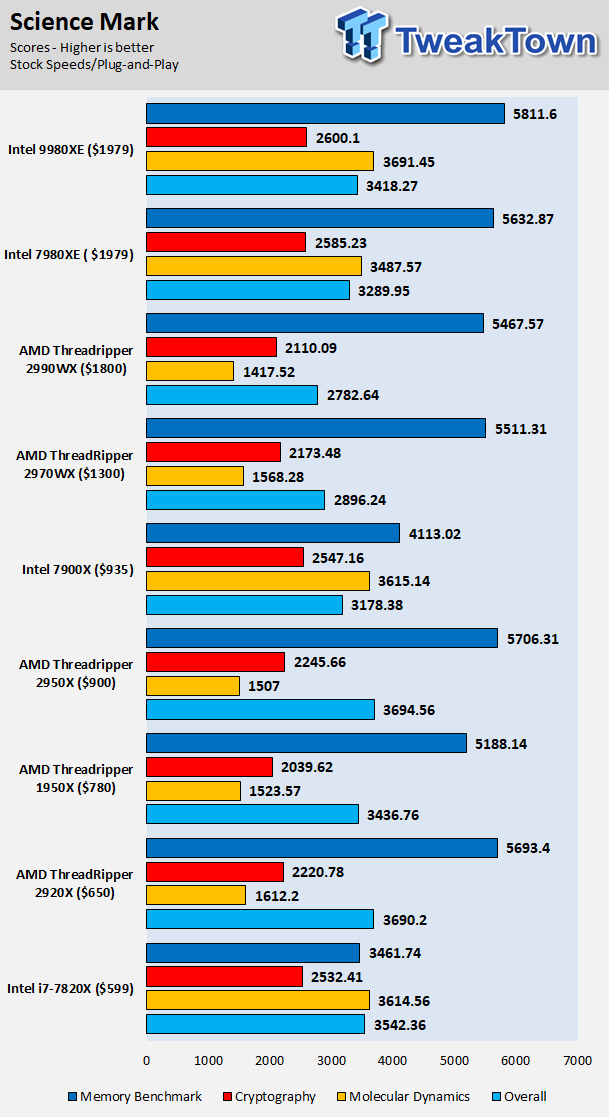 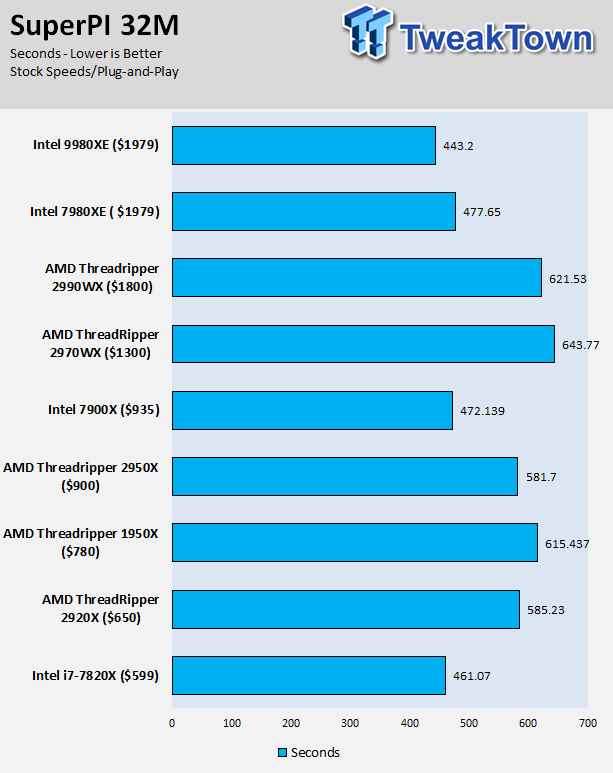 Blender shows some improvement due to increases in AVX turbo frequency. Both Handbrake tests show some very decent gains; we weren't expecting 200-400MHz to make such a big difference. ScienceMark's mixed workload shows some minor improvements compared to the 7980XE. SuperPI reflects the 100MHz increase in single core boost from Turbo Boost Max 3. 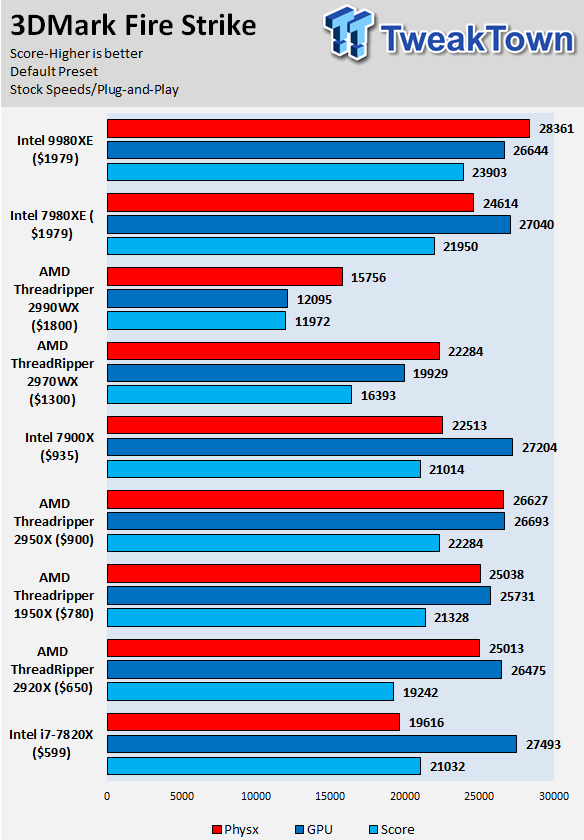 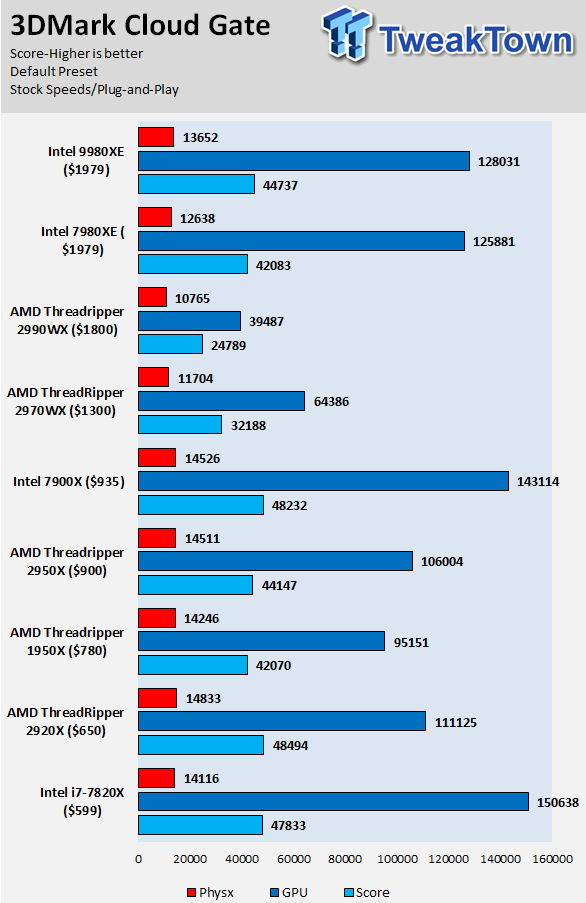 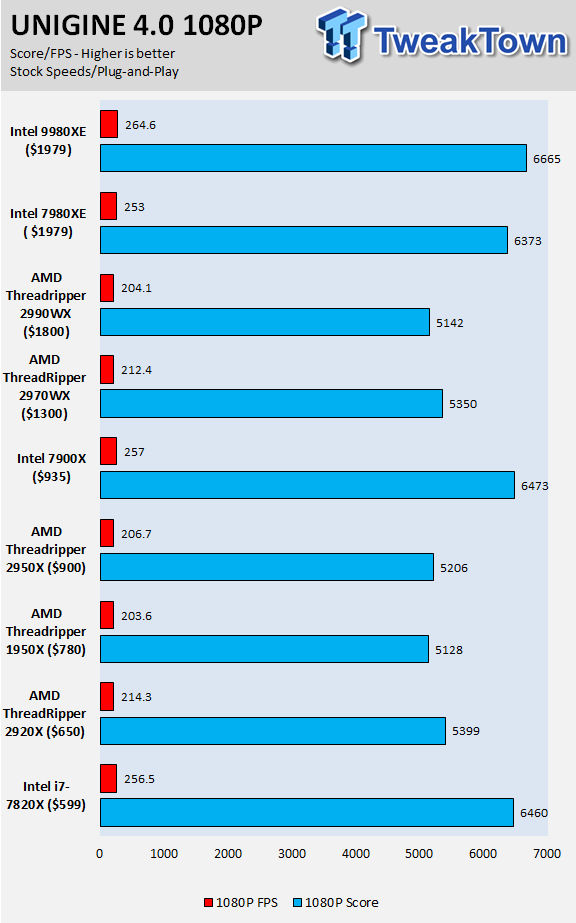 FireStrike and CloudGate seem to enjoy like the frequency increases, and it's an early sign for what we should expect in games. Unigine shows some hefty gains in gaming, something we didn't expect since this isn't really a gaming-focused CPU. 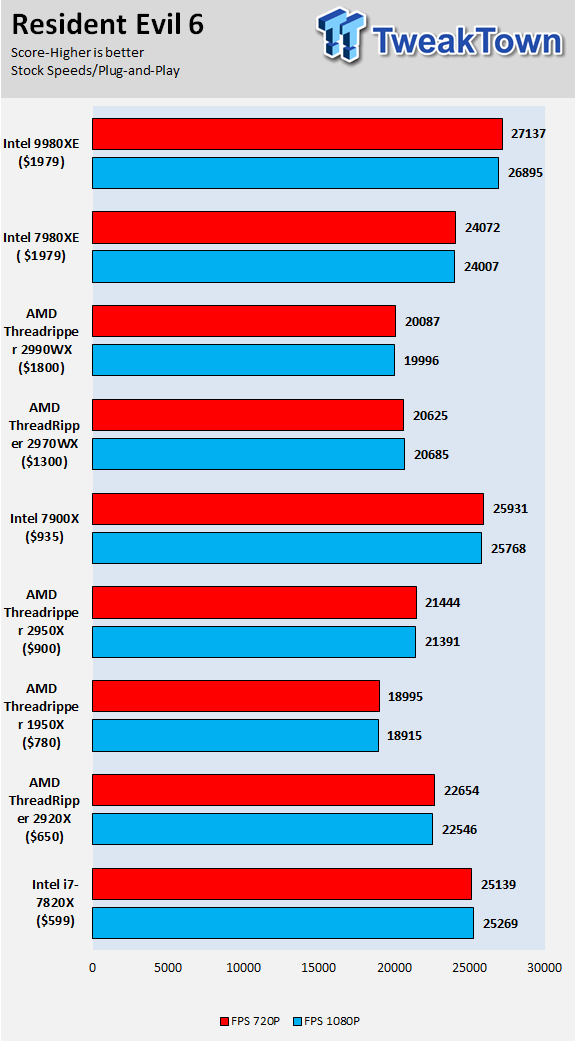 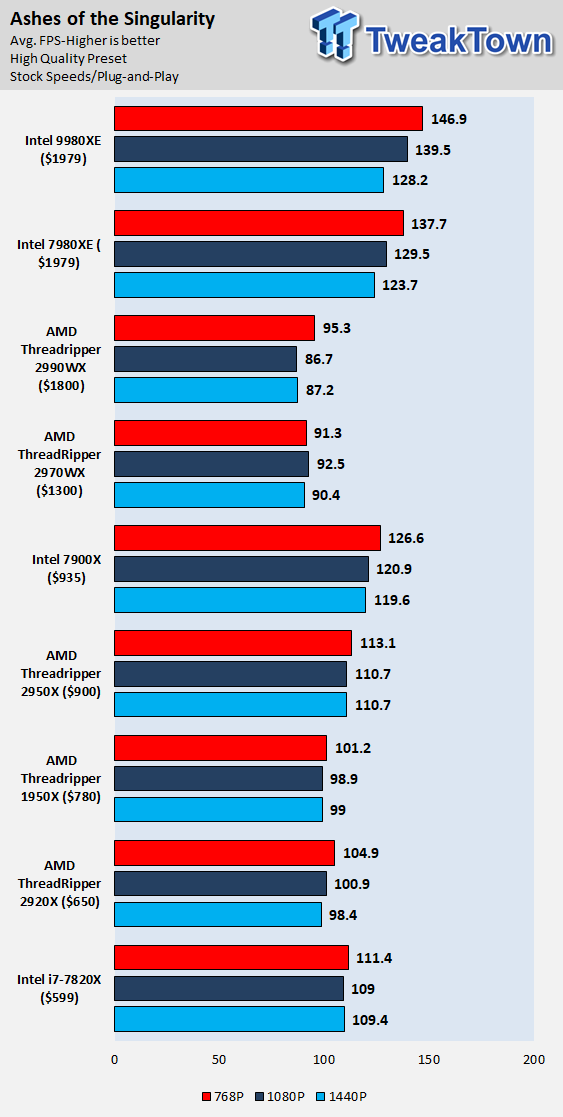 Games like frequency, and while the desktop S-series of processors is much better, the 9980XE easily beats out both the 7900X and 7980XE with ease. The frequency increases are significant for gaming, but we will stop short of calling this a gaming CPU because it's not. It can be used in mix workloads, and in that case, you will see gaming improvements over the 7980XE if you will use it in that way. The reason we suspect the considerable improvements in gaming is because of turbo table improvements you can see on the last page.

We measure at the 8-pin power connector, and we see some pretty high power consumption in Intel Burn Test. Running Prime95, we found the CPU pulled almost 40W more than what we have seen here. Blender resulted in the same results we see here. Now, here is the thing, we saw XTU trigger current limit; however, we talked to ASRock who told us they removed power limits for this BIOS, and that it must be an error. 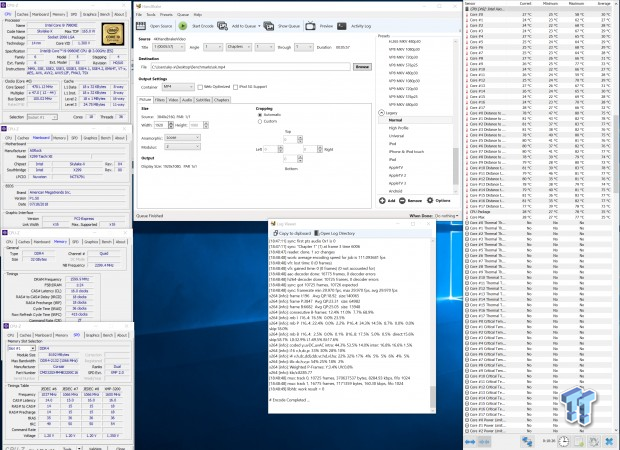 As with the 9th generation S-series CPU you can change the Tjmax offset on these new CPUs. We didn't do this; instead we treated it normally and went to see how high we could get the CPU and have it pass HandBrake 4K rendering as we do with all CPUs. We set input voltage to 2.1v; this is required to unleash performance when overclocking, if you leave it at 1.8v your CPU will be power constrained while it pretends to run unleashed at higher frequencies.

We then initially set a VCore of 1.25v, but we found we could go up to 1.3v with the same temperatures as the 7980XE. We enabled XMP set all core to 4.7GHz, and we didn't set any offsets, but you can do that if you like. We were able to get 4.7GHz out of the CPU, but we could have gone higher and had it pass our test, but we didn't because we don't want to give users the impression they can expect 5GHz overclocks with this CPU running Prime95 on high-end water cooling. I don't think most people could find a way to cool 500W with water. However, we will say to expect a few hundredMHz higher than the 7980XE, as this is basically a delidded 7980XE.

Thermal Interface Material: The change to solder from paste as the thermal interface material between the CPU die and the internal heat spreader has resulted in many doors being unlocked for the 9980XE. For starters it lowers thermal barriers, allowing the CPU to run cooler. That thermal headroom then results in the ability for the CPU to run at faster frequencies.

Frequency Bumps: As the base, Turbo Boost 2, and Turbo Boost Max 3 frequencies have all been increased, so have the turbo tables it would seem. We can see the effect of the changed Turbo table in our gaming results and mixed workload results. All core maximum frequency appears to have also changed, as all core Turbo has gone up by a small margin from 3.4GHz to 3.8GHz (3.8Ghz is also AVX all-core). AVX 2(256) all core has gone from 3.2GHz to 3.3GHz, and AVX3 (512) is rated for 2.8GHz.

Platform Expansion : Intel offering up all 44 PCI-E 3.0 lanes from the CPU to all SKUs is excellent news for both CPU buyers and motherboard vendors. It should make motherboard design slightly better for PCI-E lane output, and since there are no 4-core SKUs, future boards that support 9th gen CPUs will hopefully be cheaper.

Motherboard Selection: Power consumption is very high, and you will need a powerful motherboard to fully support and overclock the 18-core 9980XE. Then again, if you are spending $2K on a CPU, you shouldn't cheap out on a $300 board, and you should get a board that is designed to support these new CPUs, although it will add on to the price tag.

We will say it; the 9980XE is what the 7980XE should have been, and Intel should have never used PTIM (paste) instead of STIM (solder), as the resulting gains are impressive for no other significant changes. 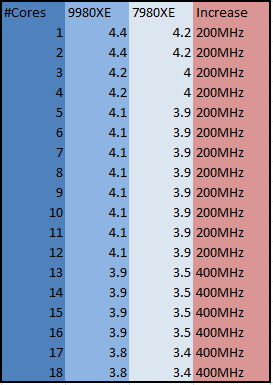 We are just happy Intel didn't raise the price of the CPU. What we like even more are those considerable gains in the turbo tables we obtained above, 200MHz across the board, and 400MHz from 14-18 core usage. Those are substantial gains and take advantage of the thermal headroom, but power is still going to be a bit higher. In the end, these CPUs will only be limited by cooling when it comes to overclocking.

While we were able to get above what we got when overclocking the 7980XE by a few hundredMHz, we don't think our stability test would have passed something like Prime95, which takes the CPU to the edge. You should expect the same overclocks that people with delidded 7980XEs are getting. Price is still very high, but we don't expect Intel to budge on it. Overall, this is a solid CPU with excellent performance, and since its predecessor won the performance award we see it fit to award the 9980XE the same.

The Bottom Line: With its new STIM, the 9980XE's extra thermal headroom allows it to reach frequencies its predecessor couldn't by a decent margin.