Synology refreshes most of their lineup on a yearly basis. This year we started off on a high note with the All-Flash FS3017 tested with 10Gbe which we subsequently used for the DS1517+ in June and DS1817 in August. In November, we looked at the RS217 Rackstation platform and today, we close out the year with the DS918+. 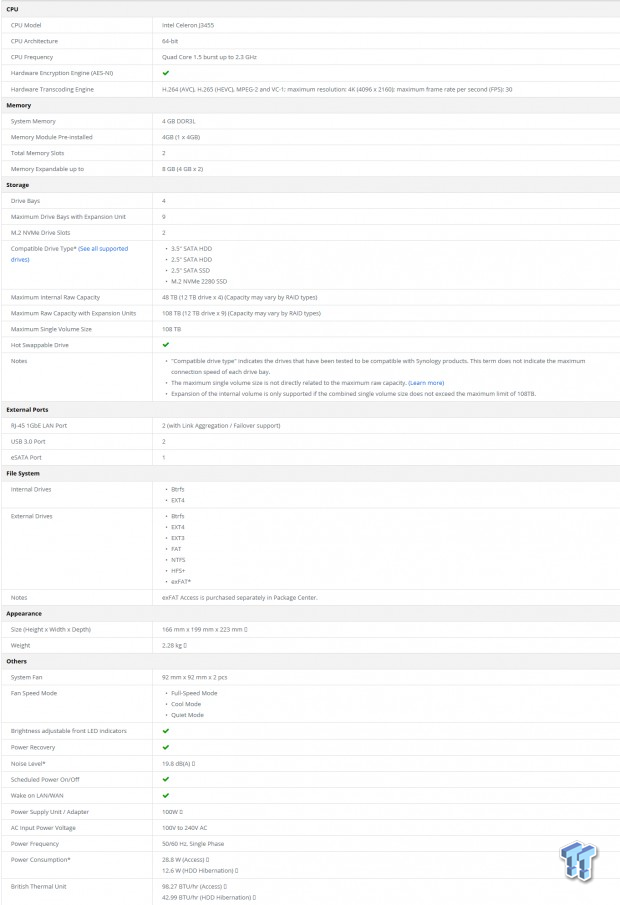 The DS918+ sits towards the middle of the Plus Series lineup, right between the DS218+ and 1517+ from earlier in the year. In the grand scheme of things, the plus series is enthusiast level platforms for SMB and are one tier above value level and two above the J series, entry-level platforms. Coming from the Plus lineup, the DS918+ is a four-bay appliance offering support for two NVMe SSDs on the bottom of the chassis while at the same time offering support for expansion via the DX517 expansion chassis.

Additionally, Synology has deployed digital asset protection through its security advisor that analyzes settings, password, and networks for any possible malware. App Armor is a kernel level platform that blocks malicious code from accessing system resources while AES 256bit encryption is available for all shared folders.

The DS918+ is an Intel platform utilizing the Quad-Core Celeron J3455 operating at 1.5GHz with burst capabilities up to 2.3GHz. This solution supports both AES-NI hardware encryption along with hardware transcoding of H.264, H.265, MPEG2 and VC-1 at 4K30. Paired with the processor we have 4GB of DDR3L memory, upgradable via internal SO-DIMM slots to 8GB. As mentioned above, we have four 3.5" bays expandable to nine, with the DX517. On the bottom of the unit, we have two m.2 2280 slots with support for NVMe drives.

External connectivity starts with dual 1GbE ports with link aggregation and failover support. We also have dual USB 3.0 ports and a single eSATA. 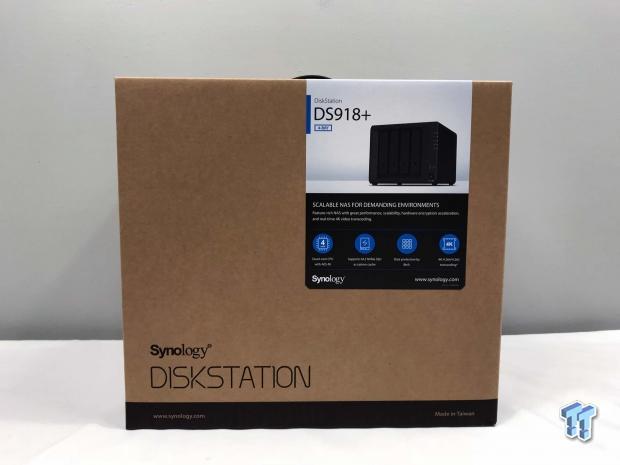 The 918+ carries a sticker at the top right with identification information. This includes hardware features listed along the bottom. 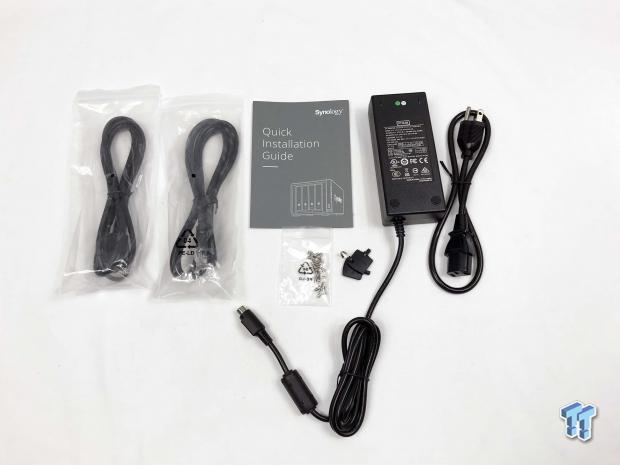 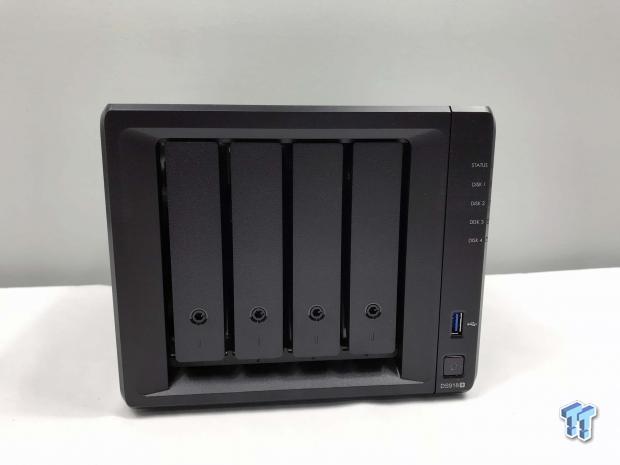 The front of the unit houses all four bays, drive locks at the bottom. To the right, we have activity LEDs for each slot and overall status. At the bottom, we have one USB 3.0 port and the power button. 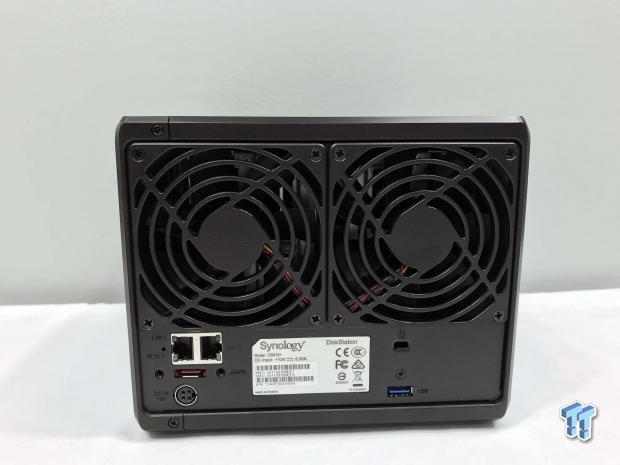 On the back, we have dual 92mm fans for even cooling of the components. Under this, we have both of the 1Gbe ports and eSATA port. To the right, we have a Kensington lock slot and USB 3.0 port. 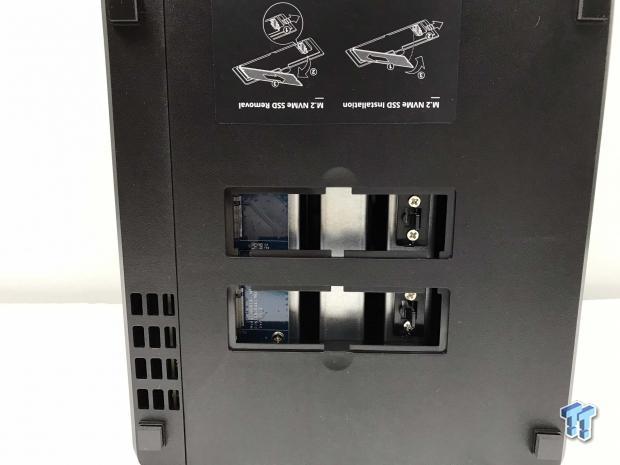 The bottom houses both m.2 2280 slots, both of which allow toolless installation of drives. 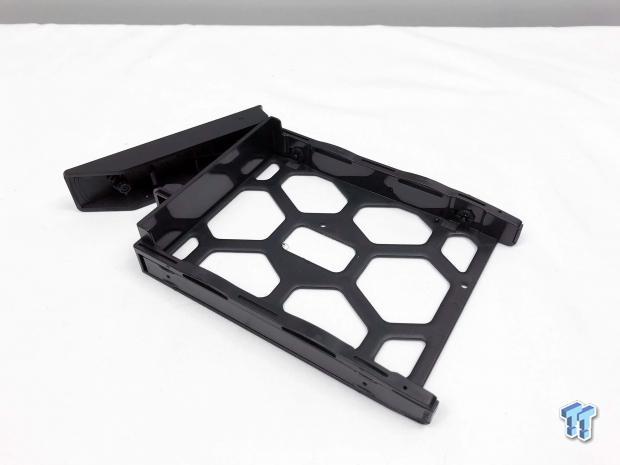 The drive trays are plastic and tool-less but do offer vibration dampening with rubber rings. 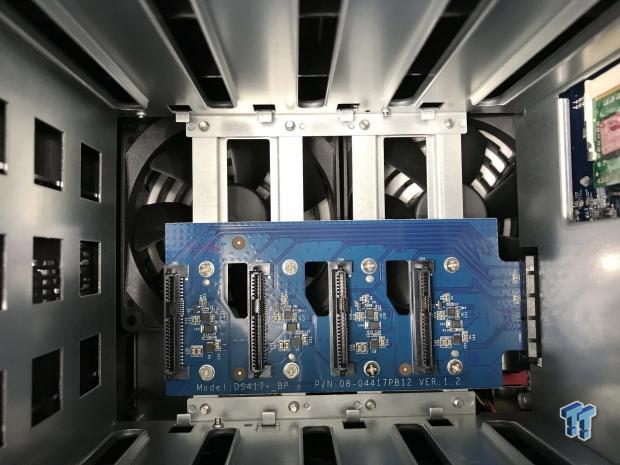 The NAS backplane supports both SATA and SAS drives. 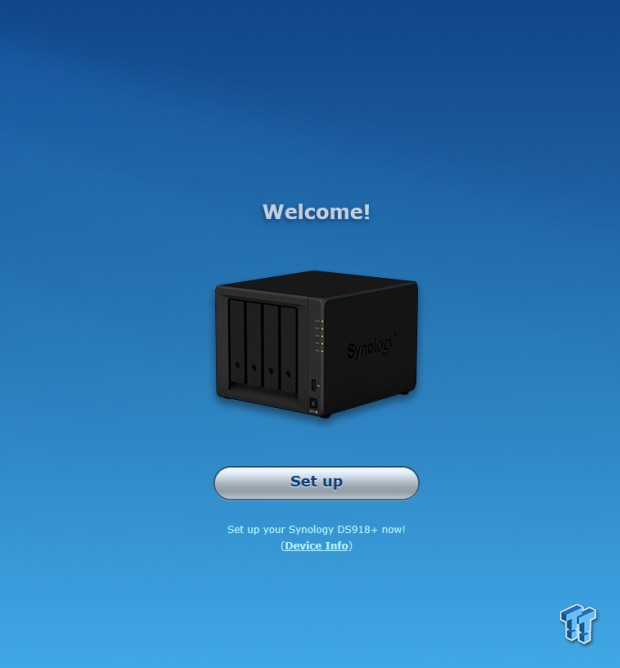 Synology setup hasn't changed since our last review. We basically have a wizard that guides you through setup, seen above. 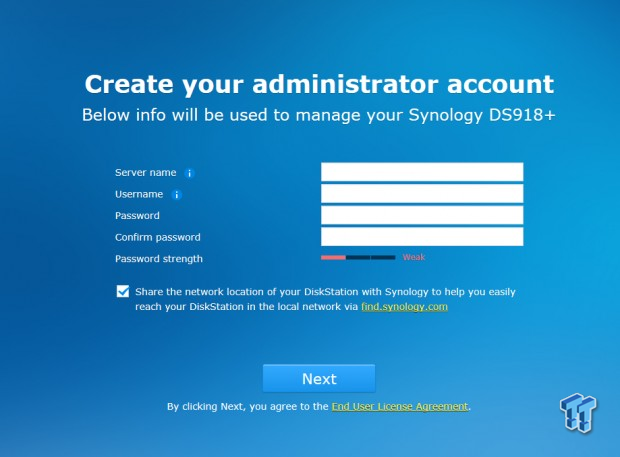 DSM setup takes around 5-10 minutes depending on drives and starts with setting up server names and passwords.

The desktop for DSM6.2 houses a few icons to the left for installing packages and looking over your files in File Station. At the top left, you can click the four-square icon to get further options. 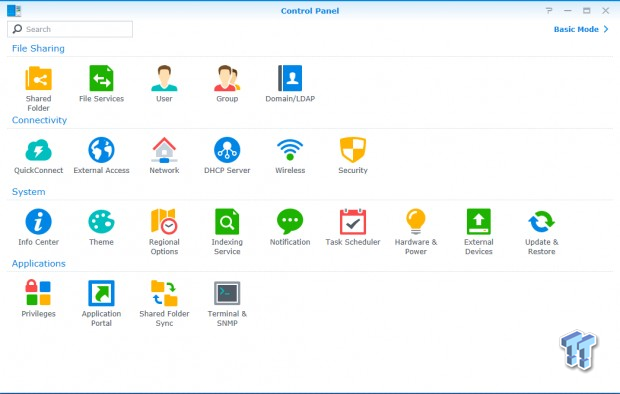 Inside the control panel, we have access to shared folders and user/group creation, network and security settings along with update and restore functionality.

On the dashboard, the top left will open up access to File Station, Resource monitor, and storage manager directly while also enabling HS manager and support center. 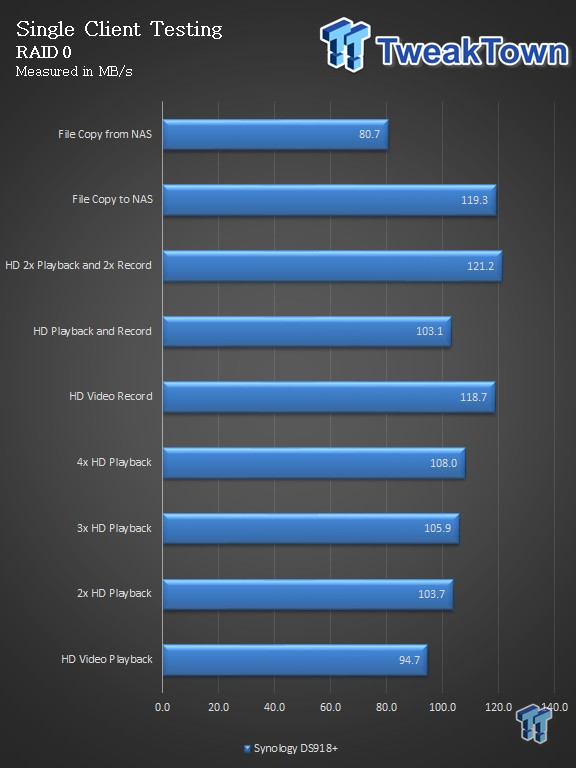 Most of the platform we have tested this year have been 10Gbe, so we don't have any comparable platforms for this review. That said we run through the normal testing starting with single client NASPT. Playback does quite well peaking at 108 MB/s while record reaches 118 MB/s File copy to the NAS reaches 119 MB/s while from touched 80 MB/s. 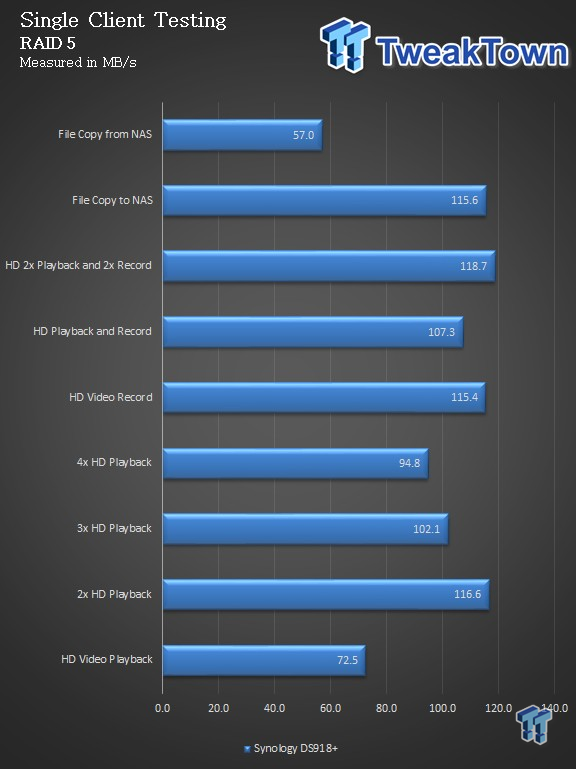 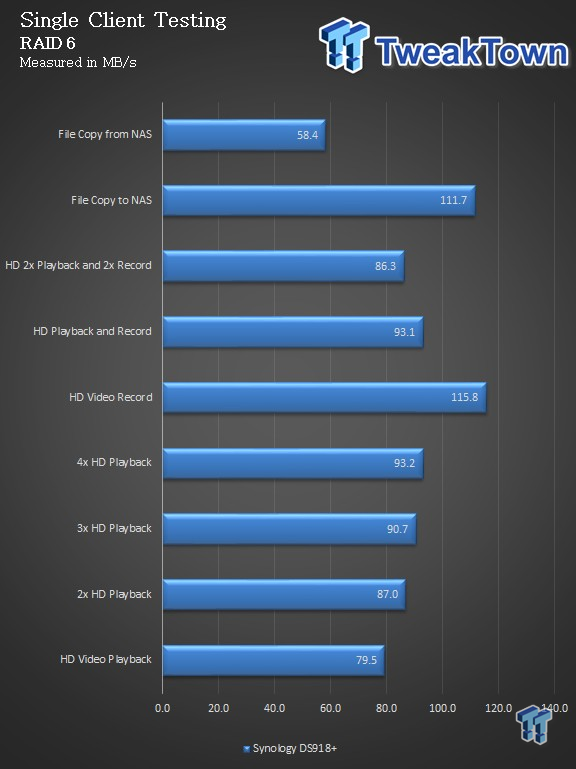 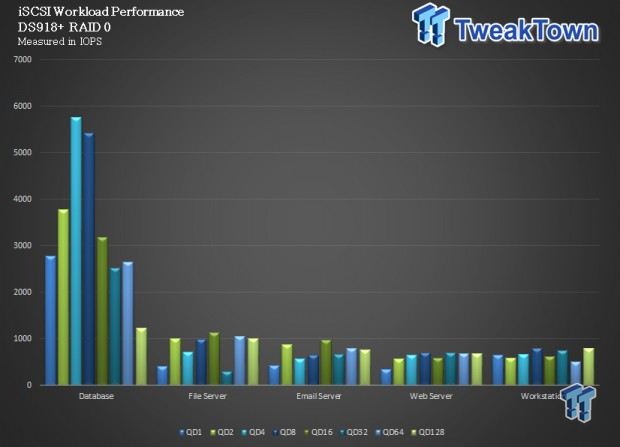 We start with all workloads in RAID 0 with a clear advantage in the database. The peak comes at QD4 and 8 nearing 6000 IOPs. File and Email server both reach 1000 IOPs with Web Server and Workstation both hover around 750 IOPs. 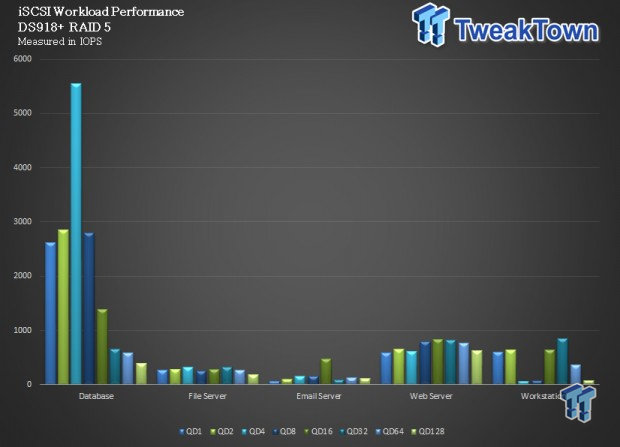 Moving to RAID 5, we see Database reach near 5500 IOPs QD4 while File and Email server both around 400 IOPS. Web Server looked strong around 1000 IOPs and Workstation showing the strong point at QD1 and 2. 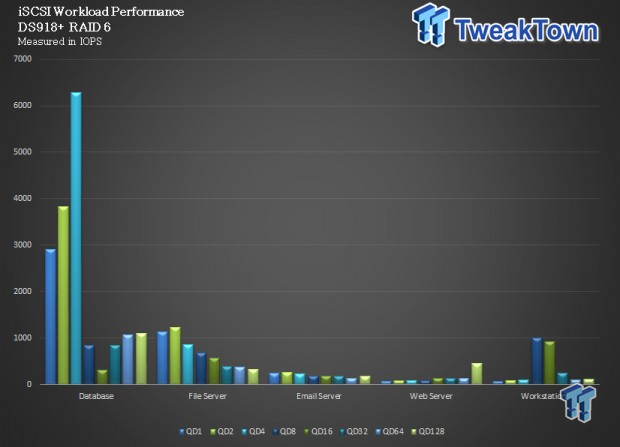 On to RAID 6, we see Database hop over the 6000 IOPs mark at QD4. Email and Web Server hover around 200 IOPs throughout. 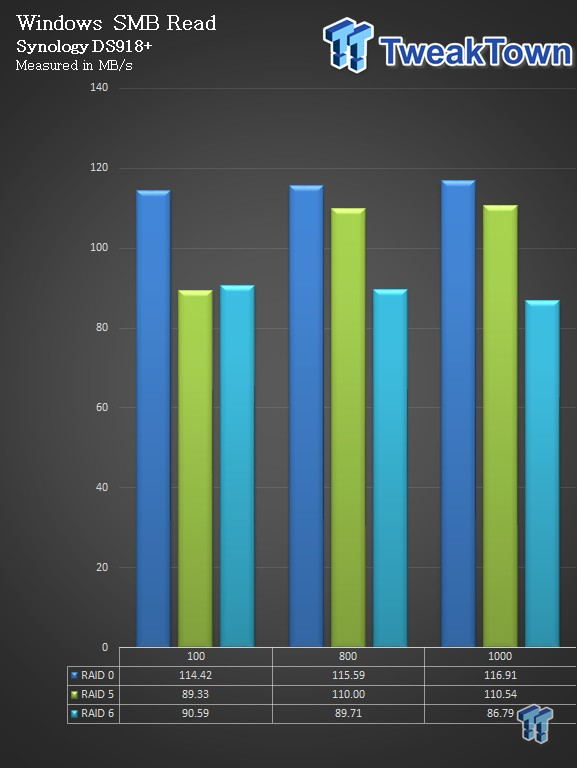 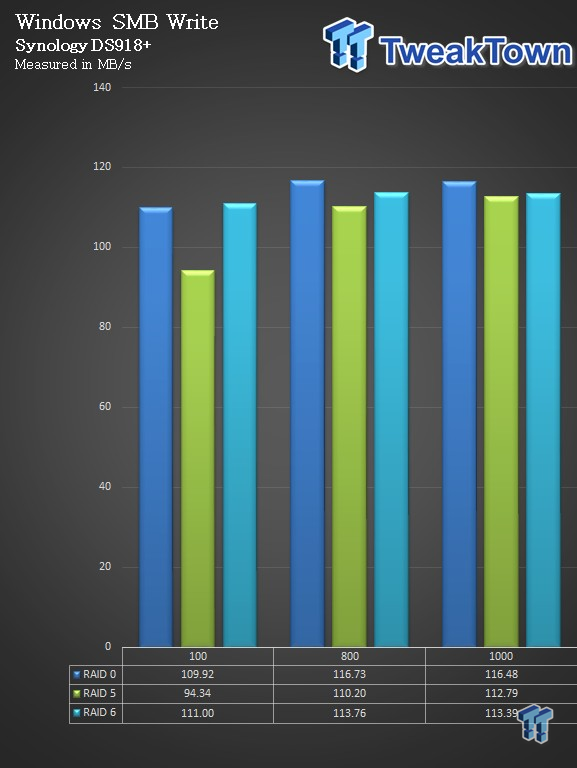 Build quality is always pretty good with the Synology units, the 918+ coming to market as the replacement for the DS916+ offers a similar chassis build with plastics and metal skeleton. We have similar placement for LEDs and front-facing USB 3.0 ports. The 918+ did do away with the front bay cover the 916+ had.

On the hardware side, Synology swapped from the Pentium N3710 to Celeron J3455 with the 918+, this offers a slight improvement in performance while retaining all of the hardware encryption and decoding features of the 916+.

Performance of the 918+ in my testing was relatively good. We did have a few spots where results were low but overall, not bad at all. We started with single Client, NASPT. This gave us 108 MB/s with video playback and 118 MB/s video record. File copy touched 119 MB/s. RAID 5 was similar to RAID 0 in most cases reaching 115 MB/s in record and 115 MB/s in file copy.

RAID 6 offered the lowest results with 93 MB/s playback and 111 MB/s file copy. The workloads all showed solid Database performance from the 918+ with Web Server and Workstation the two behind that. Real-data testing with SMB read and write showed all three RAID arrays performing up to standard moving data, RAID 0 bring in 116 MB/s, RAID 5 at 100 MB/s and RAID 6 86 MB/s

DSM hasn't changed too much since our last article, with version 6.1 used in testing and 6.2 still in beta. Btrfs is one of the bigger features of this platform offering its self-healing file system, shared folder encryption and replication among others. For those that have IronWolf drives you will have access to IHM for a more accurate health monitoring of your drives and for those of you that are starting your march towards all-flash arrays Synology has deployed RAID F1.

The Bottom Line: The Bottom Line: Taking over where the DS916+ left off, the 918+ offers higher CPU performance, more RAM and the upgrade to m.2 nVme for data caching, all at the same $550 MSRP.