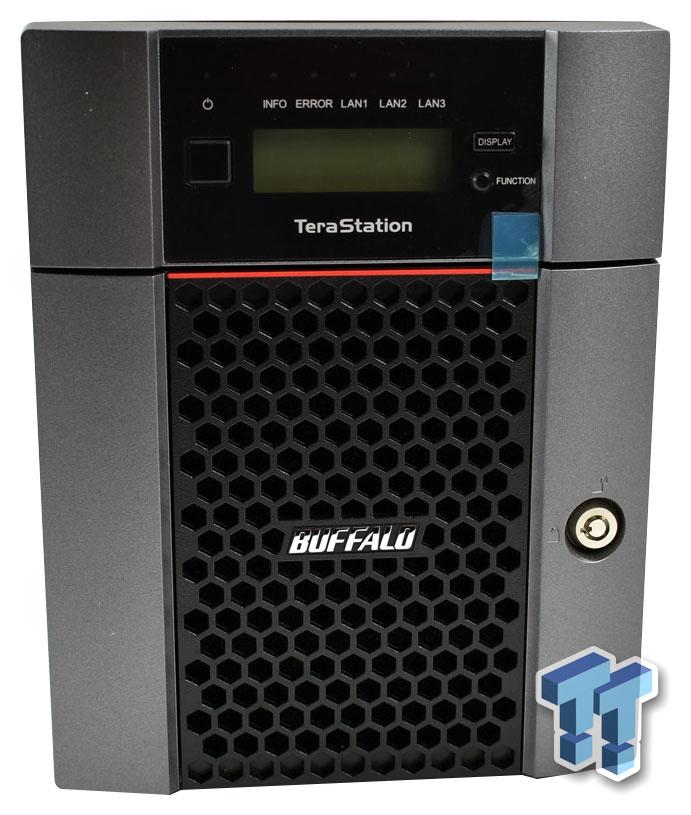 Over the years, vendors like Buffalo have produced turn-key solutions that fill gaps in the market that would otherwise be filled with more expensive server infrastructure. Offering a lower TCO, the TeraStation lineup is fit for small and medium business and offers a storage lineup ranging from four-bay desktop models to twelve-bay rackmounts.

Recently, Buffalo revamped their product stack to include a new TeraStation 5x10 lineup, and we have the four-bay TS5410 solution in house. This solution features a new chassis design with a more modern appeal. Features include VMWare certification, iSCSI Target support, Hot Swap and Rsync, along with Cloud-ready infrastructure supporting Dropbox and Amazon S3 via B-Sync.

Being a turn-key solution, Buffalo offers the TeraStation 5410 in several capacity options. For review, we had the 8TB model sent over, featuring 4x 2TB IronWolf HDDs. In addition to this, Buffalo also offers 12TB, 16TB, 24TB, and 32TB models.

The specifications for this unit call out an Annapurna Labs AL314 processor operating at 1.7GHz, and is paired with 4GB of DDR3 ECC memory, while drive compatibility sticks with SATA 6Gb/s. As mentioned, this is a four-bay unit, but it does support 8TB HDDs, for a total capacity of 32TB. The LAN interface is 10Gbe Copper with two more operating at 1Gbe Copper, and external connectivity is powered by dual USB 3.0 ports.

The MSRP of the Buffalo TeraStation TS5410DN in the 8TB capacity reaches $999.99 with a three-year warranty. In addition, two options are available with standard 3 & 5 year warranty. 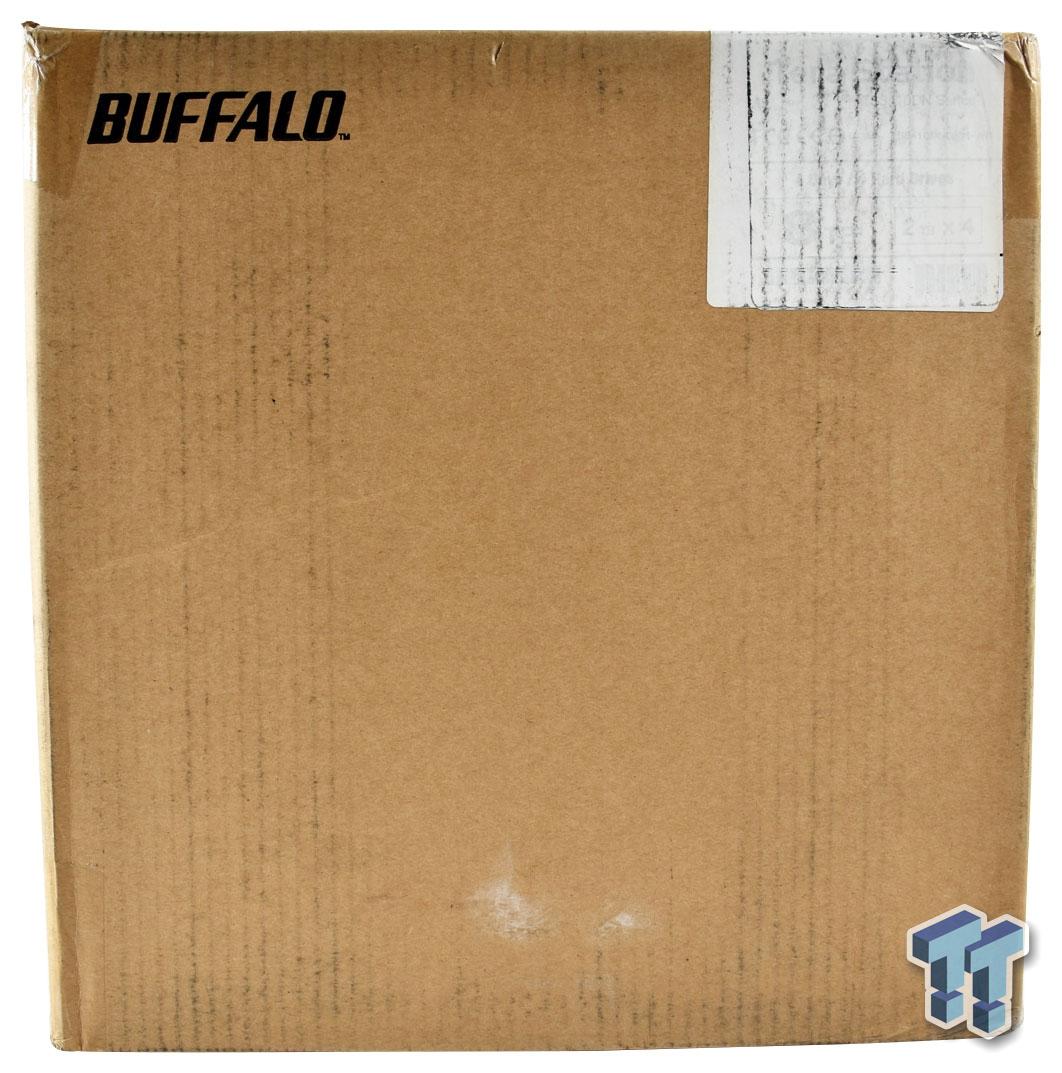 Packaging is rather simple, a brown box logo at the top left. 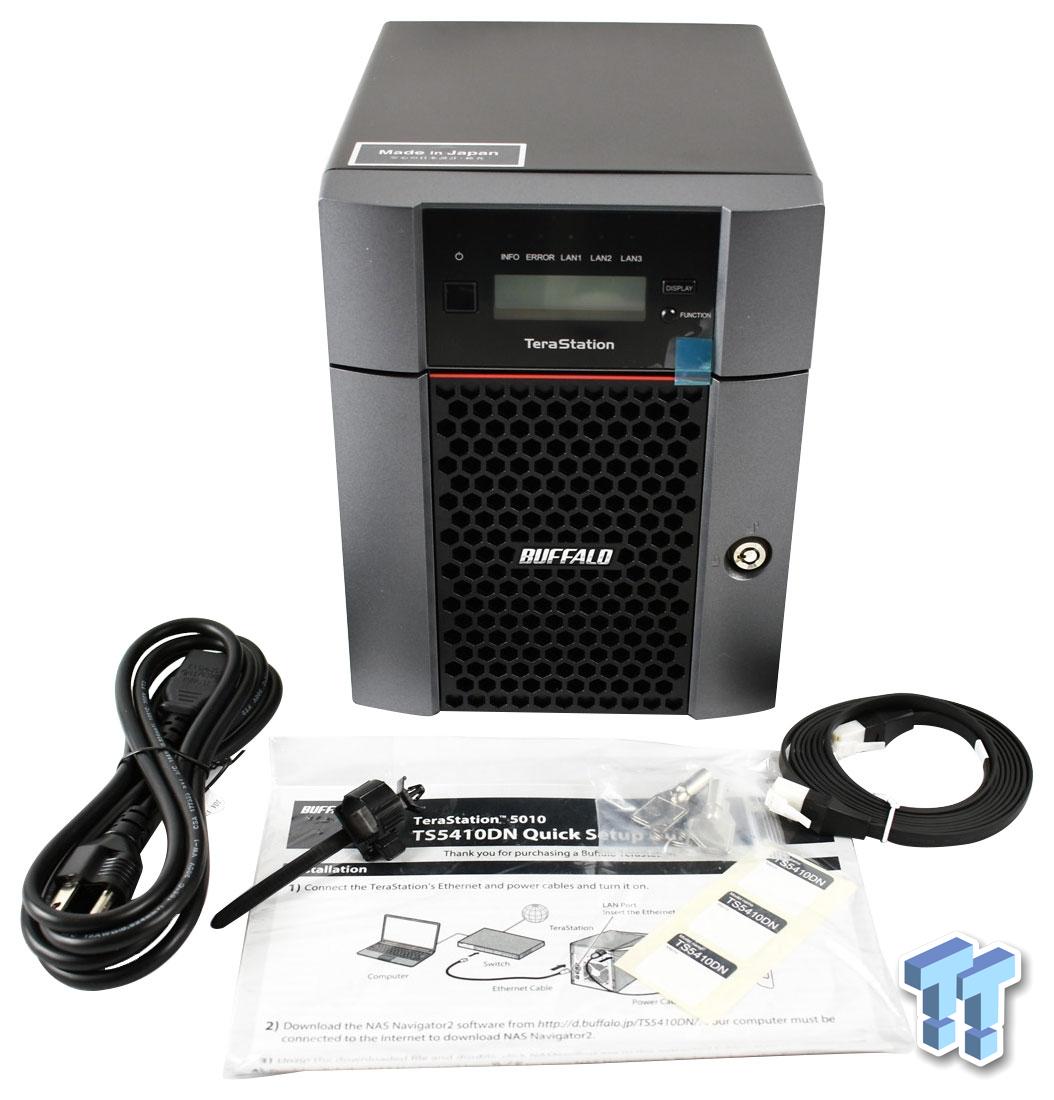 Removing the unit from the box, we notice the superb redesign of the chassis that gives this unit a much more sophisticated feel. This unit includes a power cable, reading materials, and ethernet cable.

Zooming in slightly, the top mounted LCD screen is placed next to the power button. Below, a lockable door offers a honeycomb structure and dust filter. A Buffalo logo is placed on top. 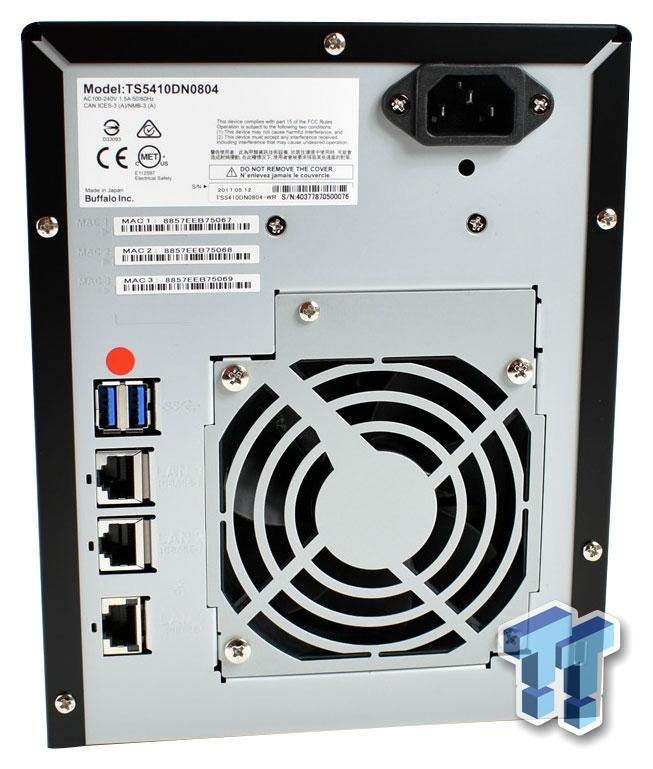 The back side carries the power input at the top followed by USB 3.0, two 1Gbe ports, and the 10Gbe port. 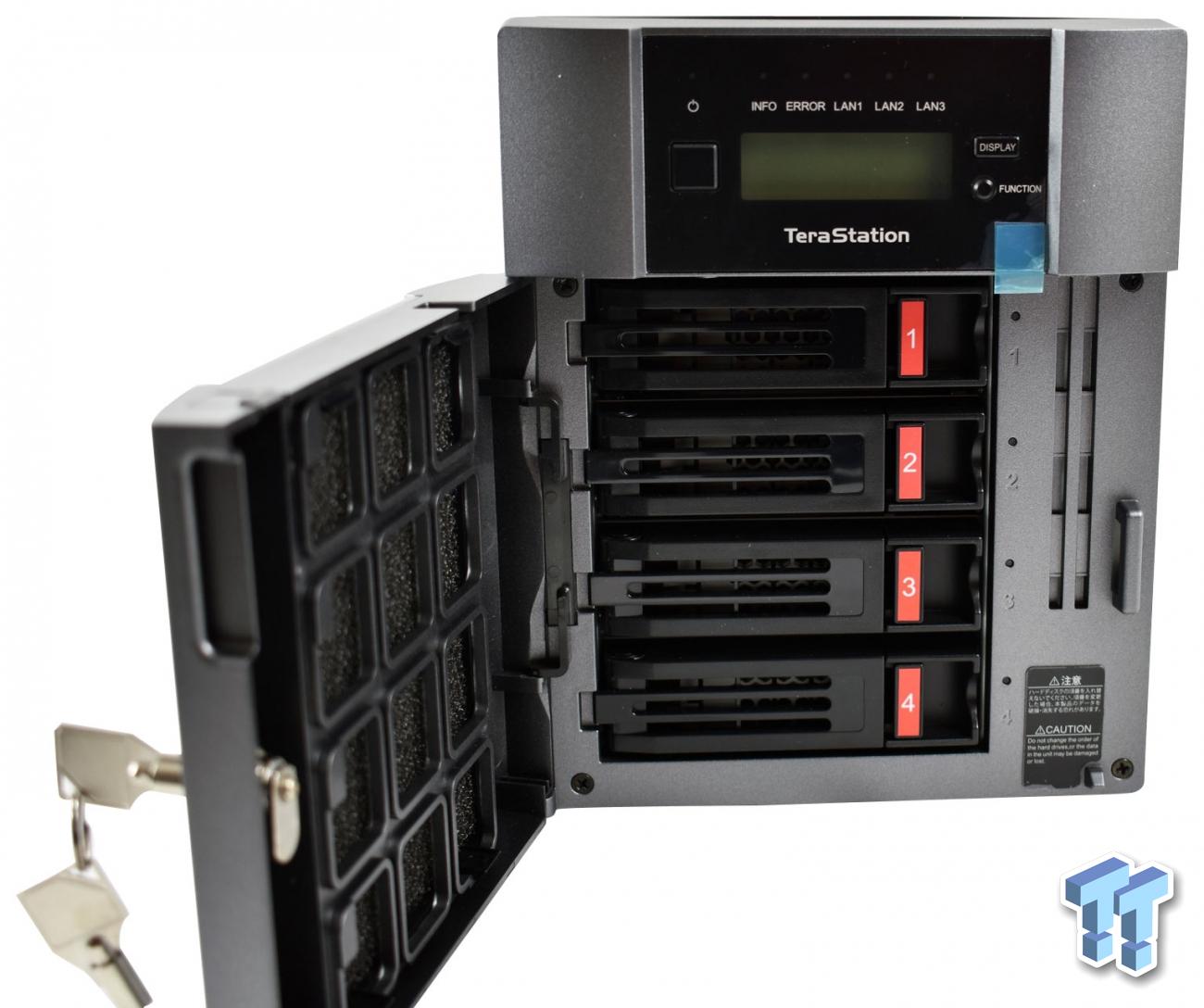 Opening the door, we have four bays numbered with activity LEDs to the right. 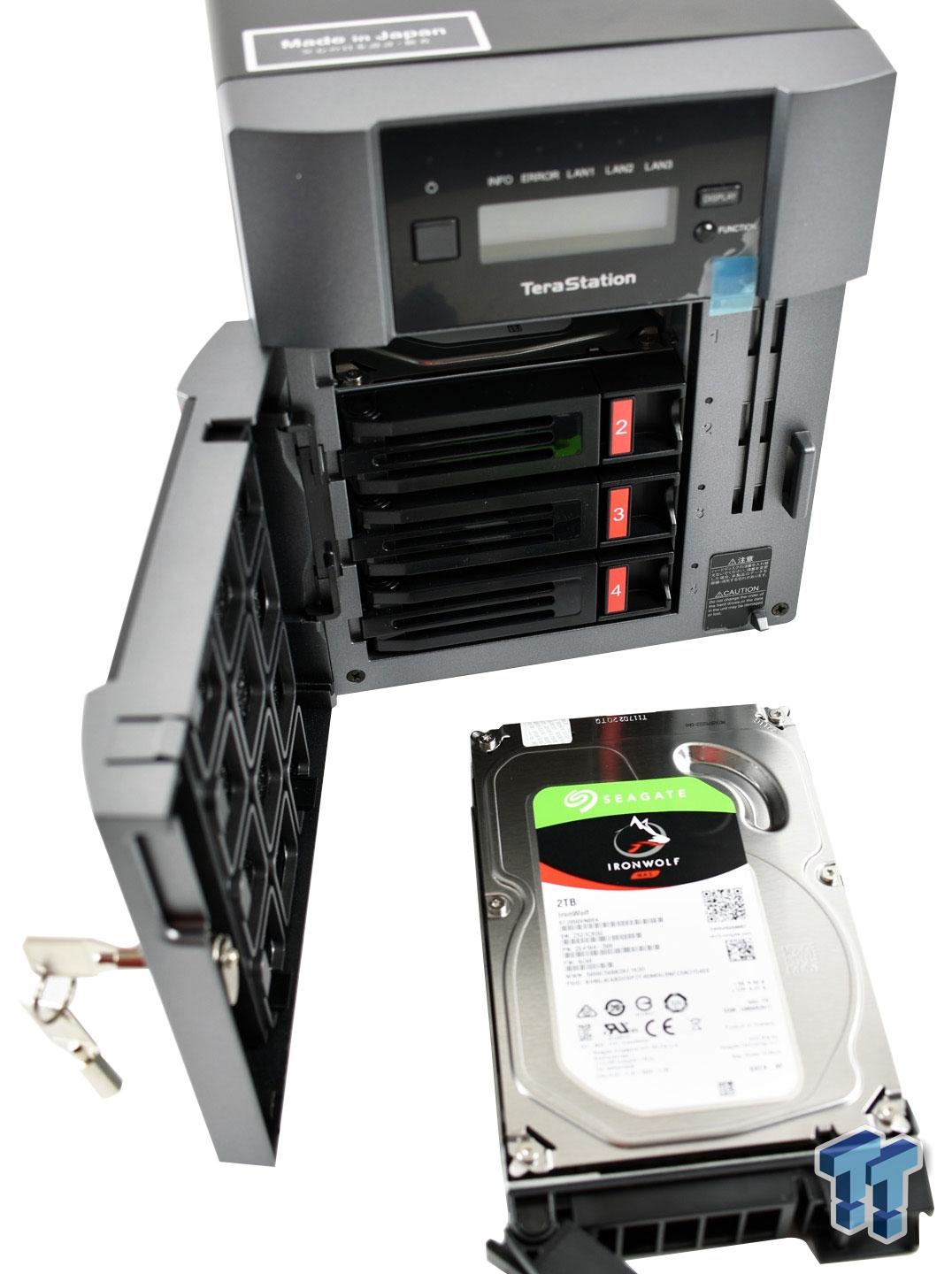 The drives included with this model are IronWolf 2 TB drives. 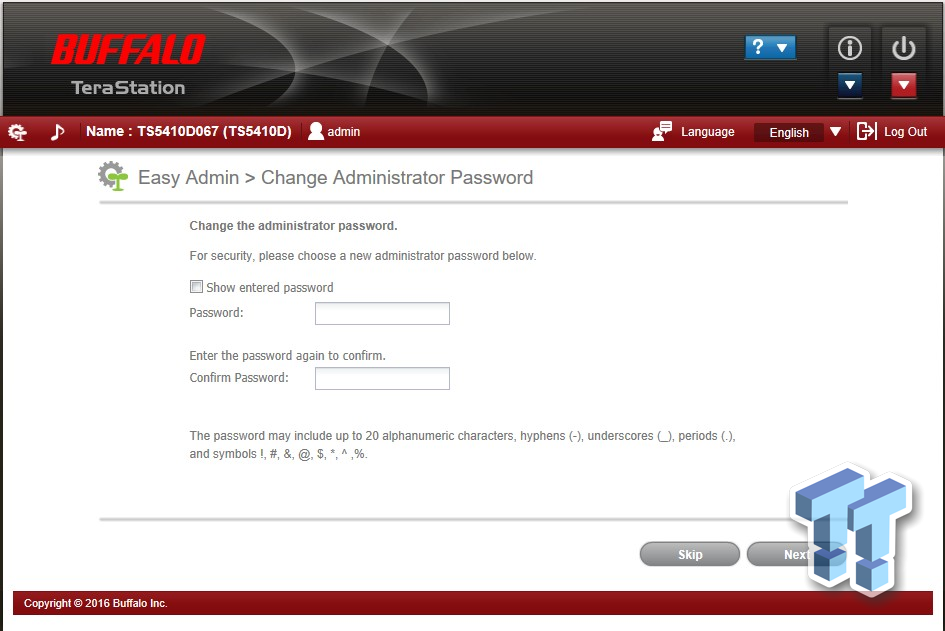 To setup the TS5410, Buffalo created Easy Admin. We start by setting up the admin password for the system. 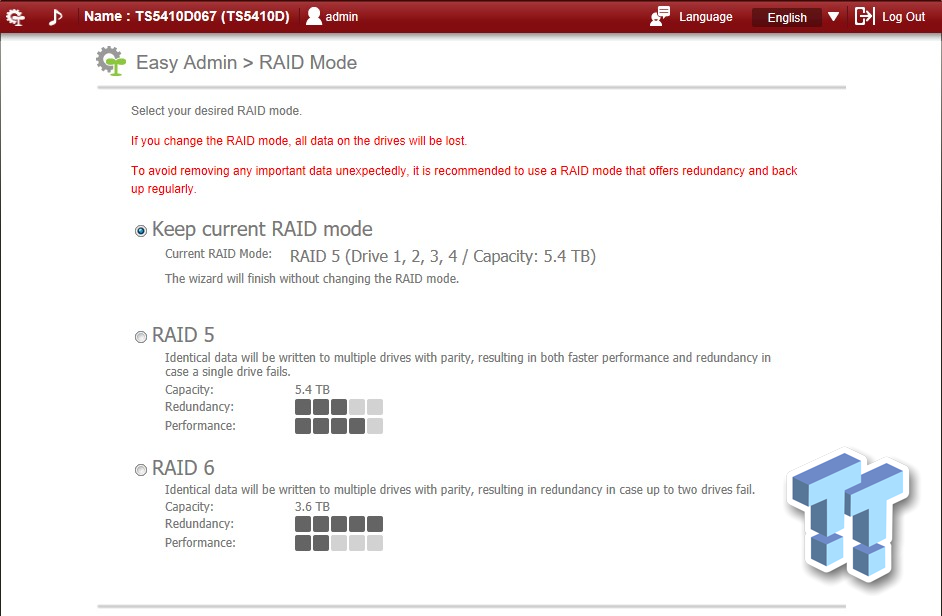 We can then move on to choosing a RAID mode. 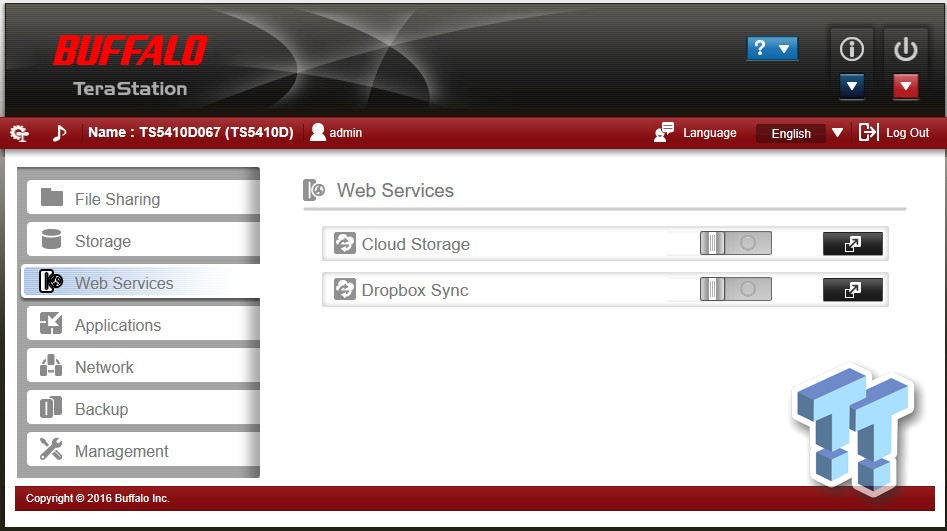 Once we get into the WebGUI, we have many more options for controlling the NAS. From the dashboard, the left side houses categories. Starting with Web Services, we see options for both Dropbox Sync and cloud storage. 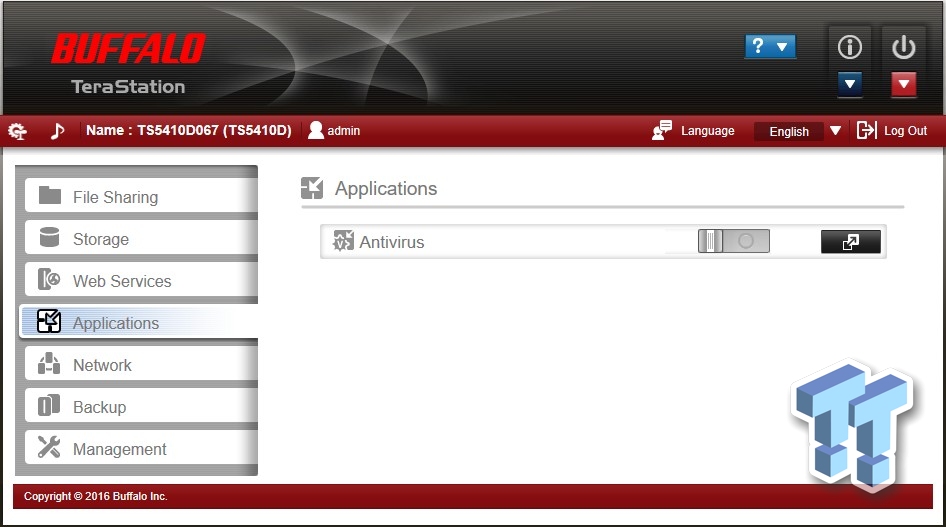 The TeraStation 5410 does include anti-virus as well to scan and keep your files safe. 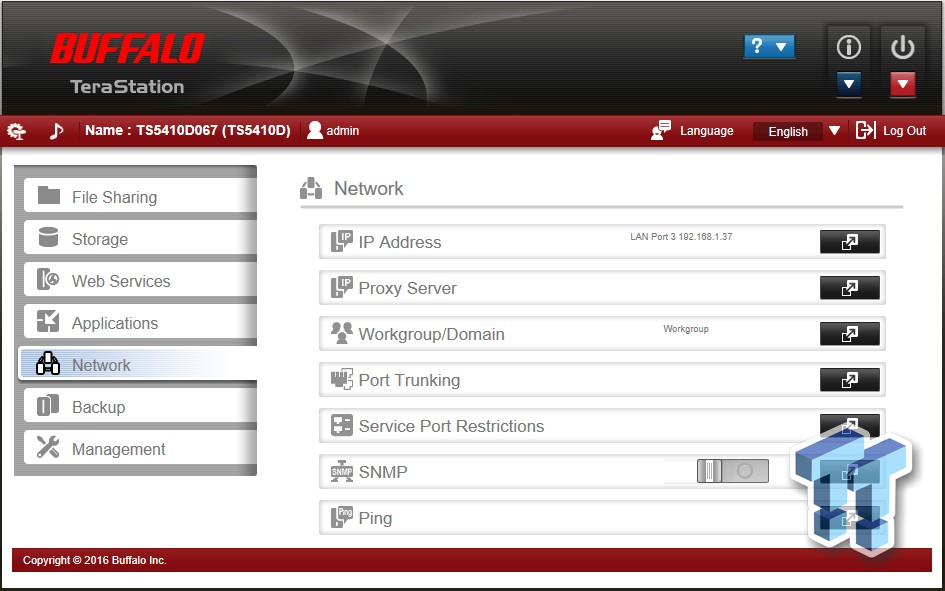 On the network side, we have options for IP settings, proxy, and domains. You can also setup port trunking and SNMP if needed. 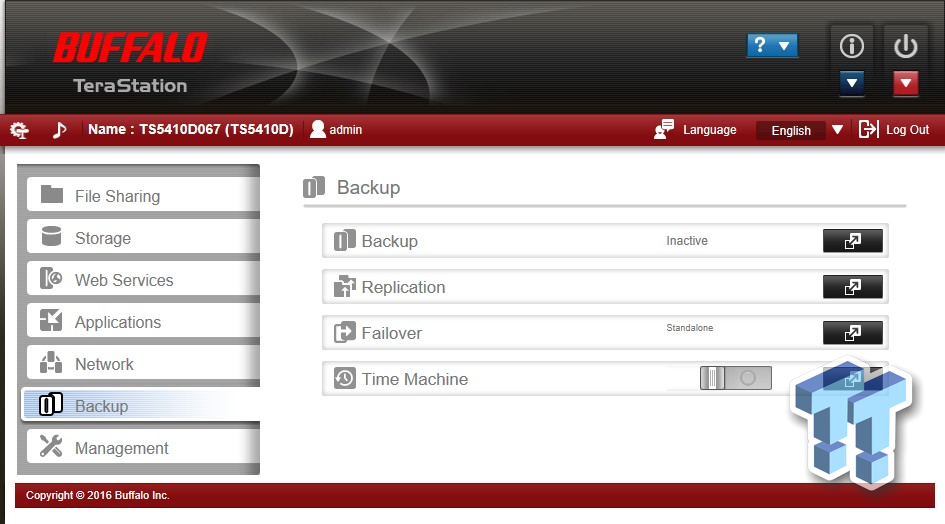 Backup options include the cloud options as seen a few images above, Rsync via the replication menu, and Time Machine for MacOS users. 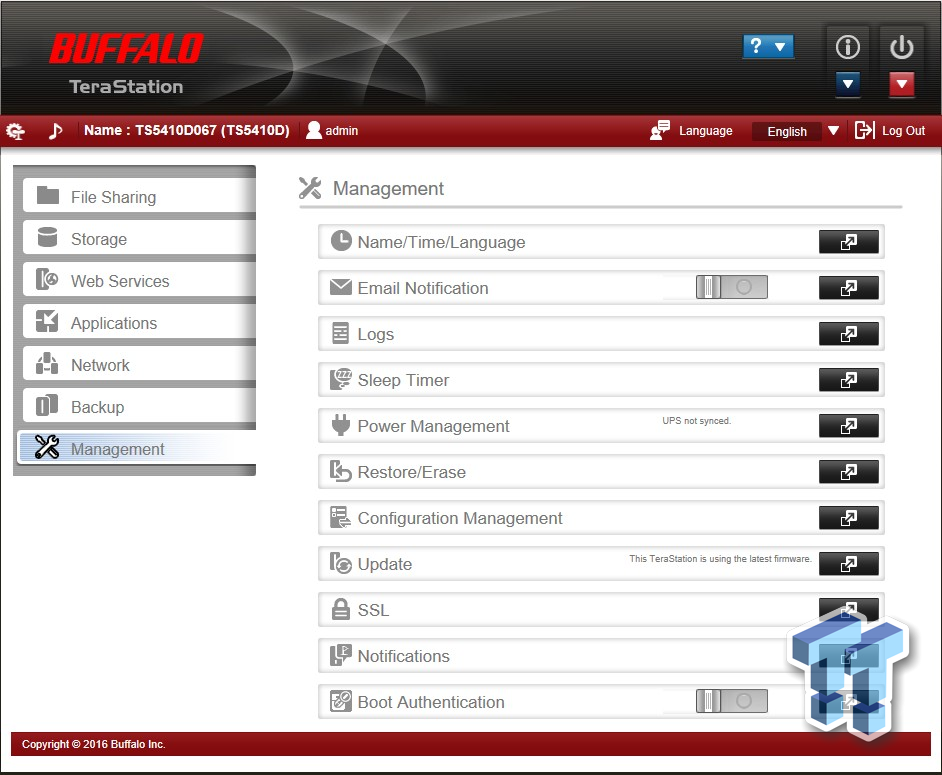 Management gives you access to date and time settings, system logs, and power management features. You can also restore or erase configurations and update NAS firmware.

Before we dive into benchmarks, it should be noted that comparison systems used SSDs in testing. With the Buffalo being a turn-key device, it was tested as supplied with four 2TB IronWolf hard drives. 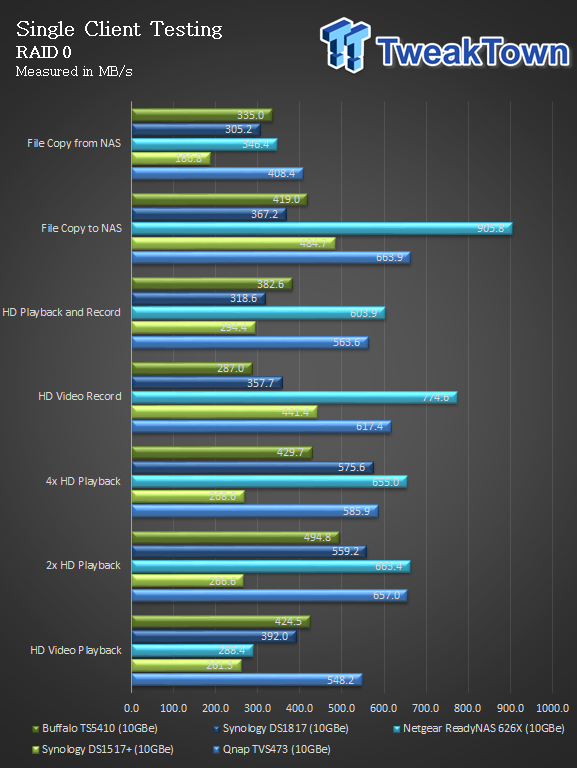 Moving into testing, I start with RAID 0 and our single client testing with NASPT. The Buffalo is the dark green NAS in the charts and considering its drive configuration I was surprised by how well it did in testing. Playback reached a peak of 494 MB/s while file copy topped 419 MB/s. 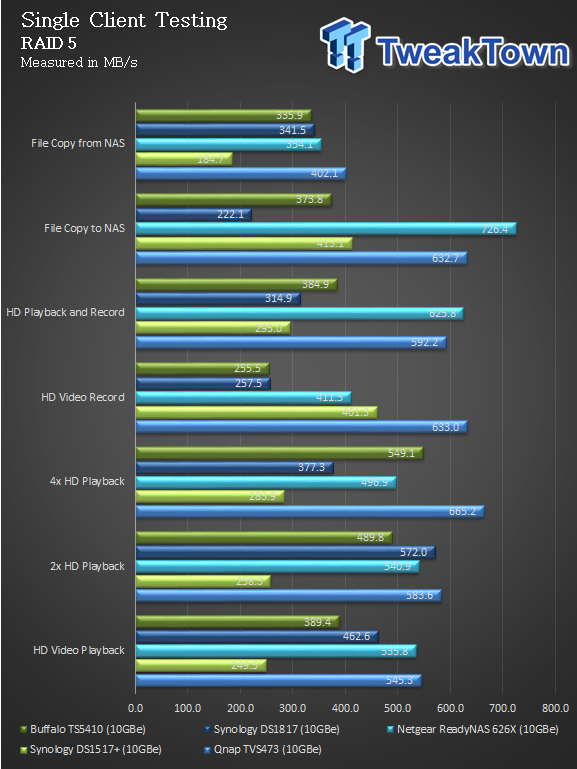 RAID 5 showed a peak of 549 MB/s in 4x playback with a small hit in file copy operations reaching 373 MB/s. 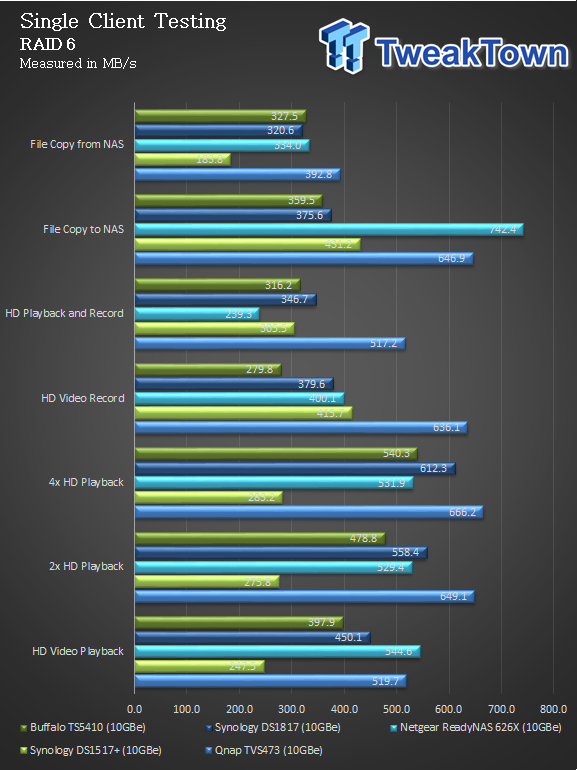 RAID 6 was similar with playback testing. We reached a peak of 540 MB/s again file copy further took a hit down to 327 MB/s. 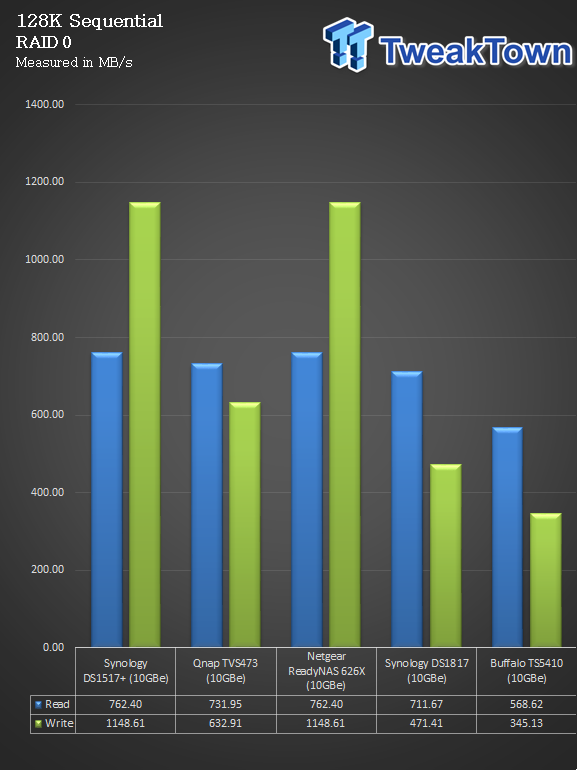 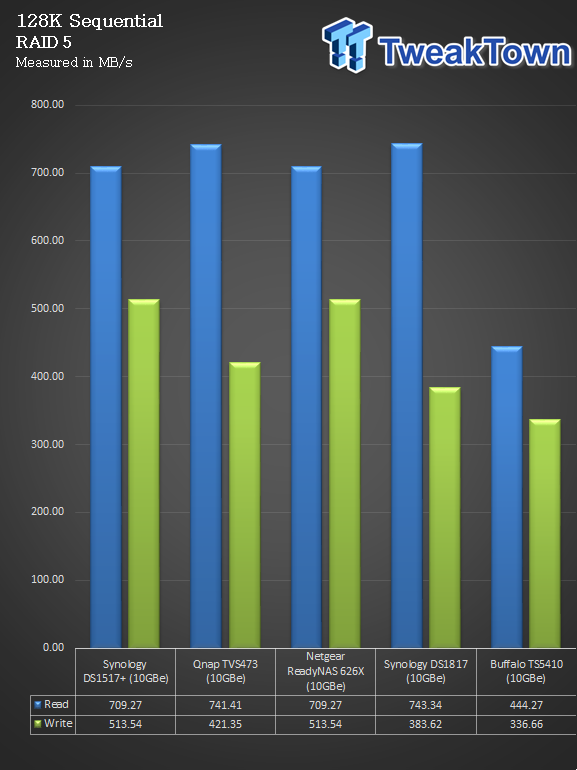 RAID 5 pulled read and write closer together with read topping at 444 MB/s and write 336 MB/s. 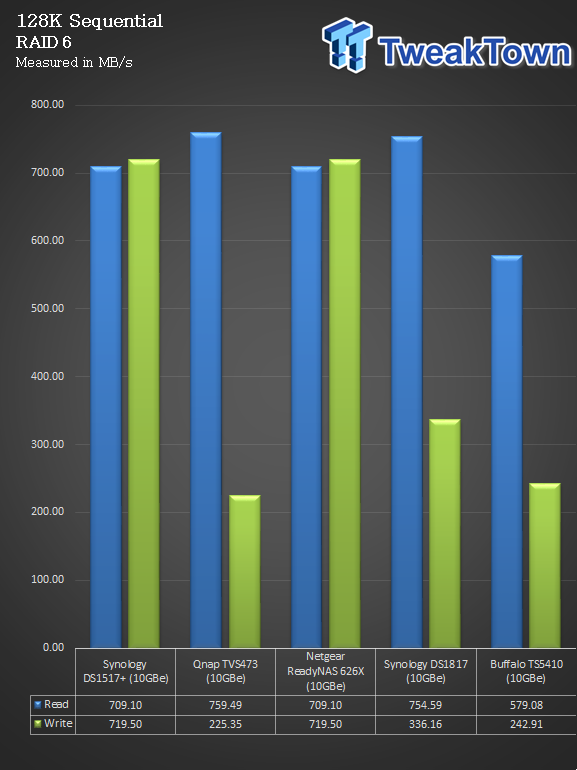 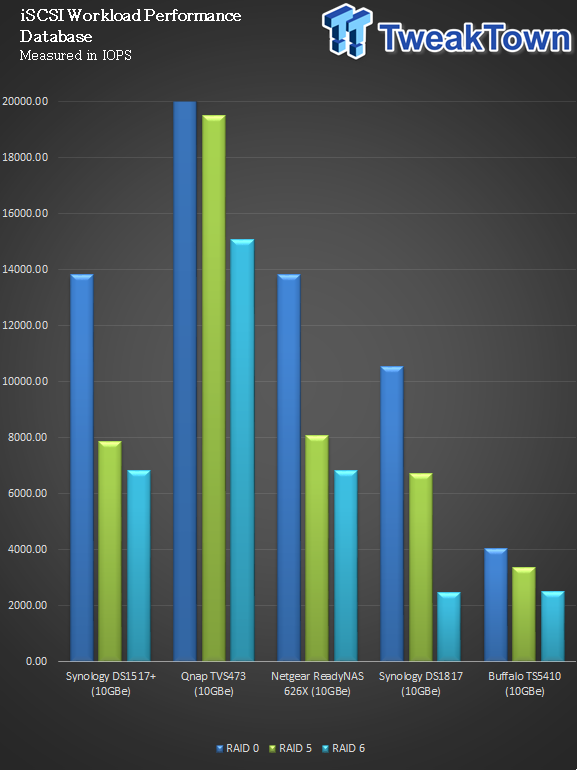 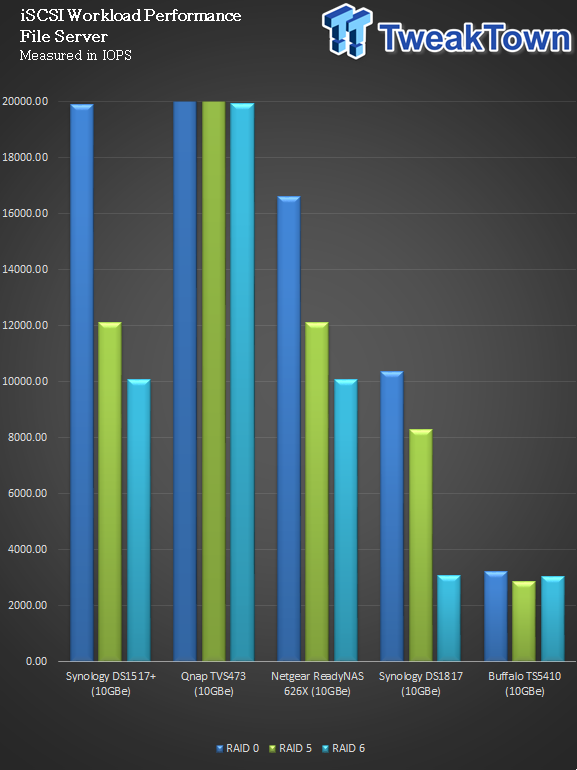 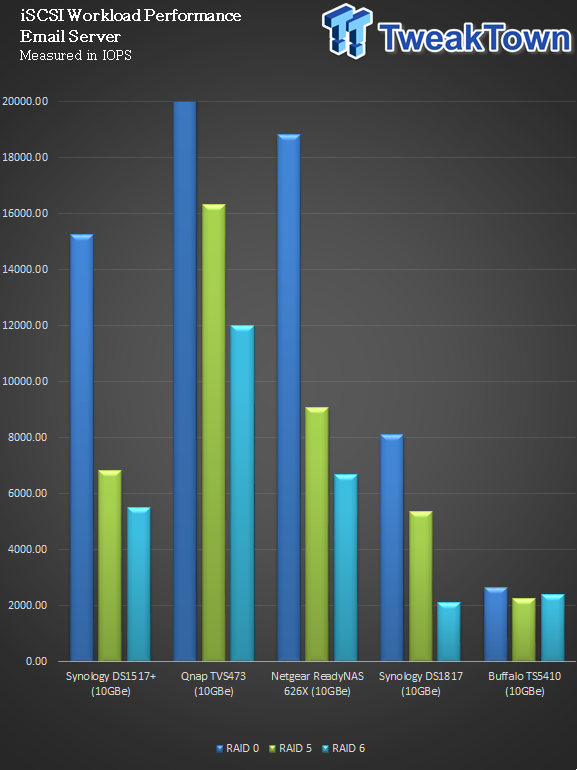 Email Server was similar with RAID 0 producing the highest at 2800 IOPS followed by RAID 6 and RAID 5. 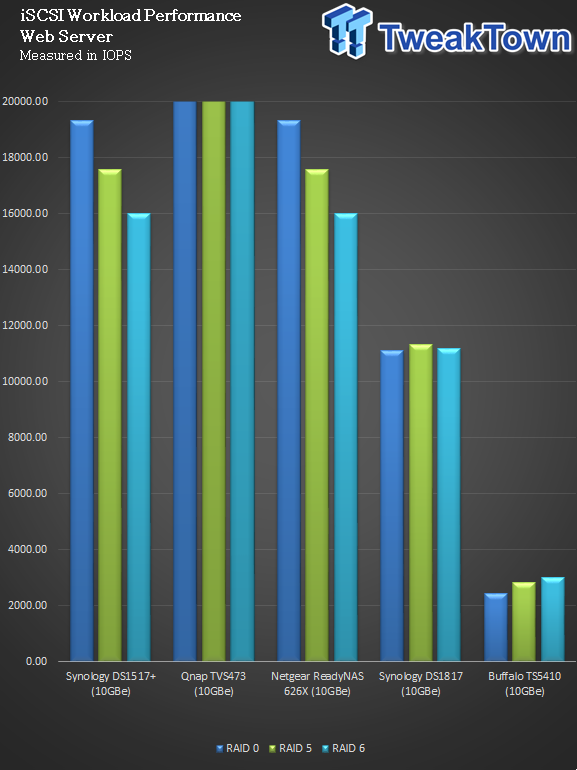 Continuing, we arrive at Web Server with RAID 6 producing the best results near 3200 IOPS, followed by RAID 5 and finally RAID 0 at 2300 IOPS. 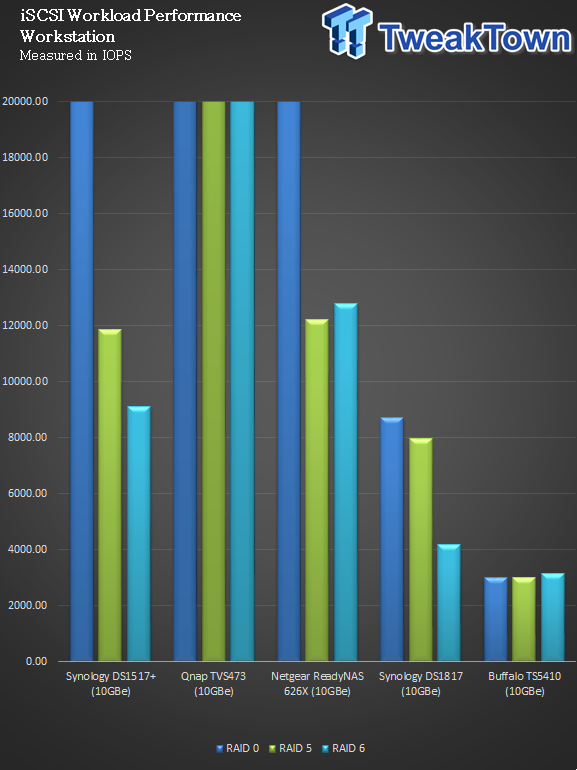 Workstation showed nearly level performance across all RAID modes, each hovering around 3000 IOPS.

It has been awhile since I last had a Buffalo NAS appliance in the lab. In fact, we last tested the TeraStation 5200 Windows Storage Server in October 2015. Since then, Buffalo has updated its lineup to include a more modern and aesthetically pleasing chassis that includes a locked door, activity LEDs, and good-sized LCD. Build quality with these changes has increased more so on the face of the appliance as the underlying structure remains steel.

Turn-key performance for this unit was quite good with the included IronWolf drives. In Single Client, we saw several occasions where it tested higher than other appliances including RAID 0 single video playback and RAID 5 and RAID 6 4x playback.

Sequential throughput topped out around 570 MB/s in our RAID 0 configuration. RAID 5 managed 445 MB/s and RAID 6 560 MB/s. Workloads proved no issue for the TS5410. We saw steady performance throughout with peak IOPS reaching 3500 in database, 2300 in Email and File server, and Workstation topped 3600 IOPS.

The web management for the TS5410 is very simple and does lack some higher-end features found on competing platforms. With that said, Buffalo does offer everything needed to make this a SMB-class solution with multiple options for offsite backup, Hot Swap drives, disk quota, share level replication, failover, and support for ISCSI target.

It does come at a higher cost than most traditional four-bay appliances, but Buffalo does try to offset that by including drives and ECC memory on its entry-level solution.

The Bottom Line: With its included drives, ECC memory, and business features, the Buffalo TeraStation 5x10 series is a great option for SMBs wanting a solid turn-key solution.