For those in the gaming community that use Killer NICs on a daily basis, the Linksys WRT32x is a game changer. For those that don't, well, you are falling behind. 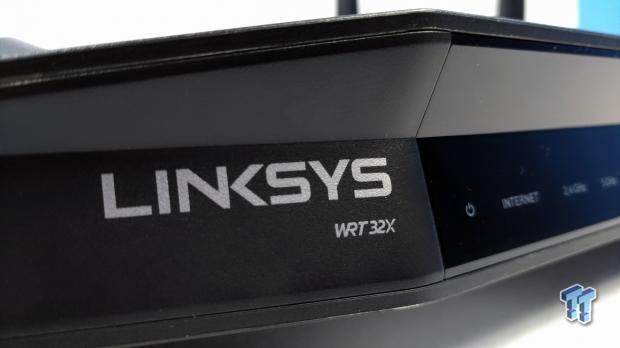 When Belkin acquired Linksys in 2013, they went to work and a year later reintroduced the WRT brand back into the market with the WRT1900ac. I was fortunate enough to get my hands-on that router just a few months after release and after testing was very happy with its performance. Now nearly four years later, we have two revisions of the WRT1900, an entry-level WRT1200 and flagship WRT3200.

At CES 2017, Linksys unveiled its project with Rivet Networks, a partnership that has birthed this latest solution dubbed the WRT32x. This router shares both its form factor, design, and internal components with the WRT3200ACM but has gone a bit further aesthetically; the WRT32x is completely blacked out.

Specifications include a Marvell 88F6820 with two cores operating at 1.8GHz, 512MB of memory and 256MB of NAND flash. Two Marvell 88W8964 radios are provided, one for each band while on the outside these are supported by four RP-SMA antennas. Controlling the wired ports Linksys has deployed a standalone switch, the Marvell 88E6352. 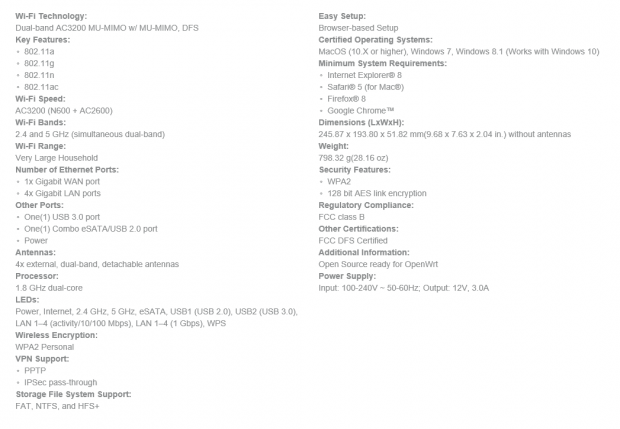 Diving deeper into the specifications, the WRT32x is an AC3200 class platform. This gives 600 Mbps on the 2.4GHz band and 2600 Mbps on the 5GHz band with support for 802.11agn+ac. On the wired side, we have a single WAN next to four LAN ports, and external connectivity includes both USB 3.0 and eSATA. 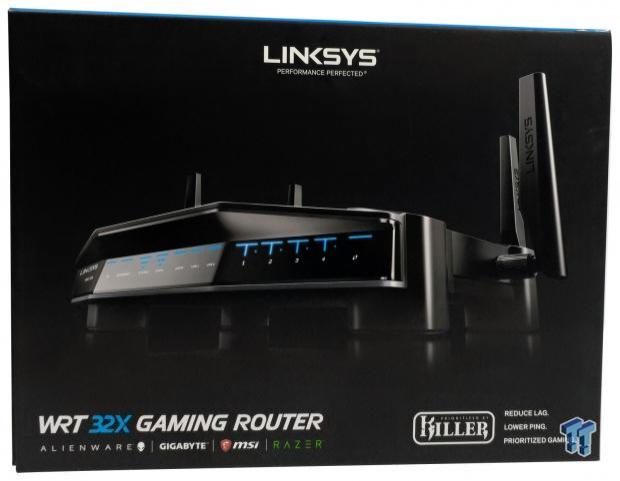 Packaging for the WRWT32x clearly shows its gaming design. On the front, we have an image of the router along with top gaming brands on the left side. To the right, we find the Killer logo. 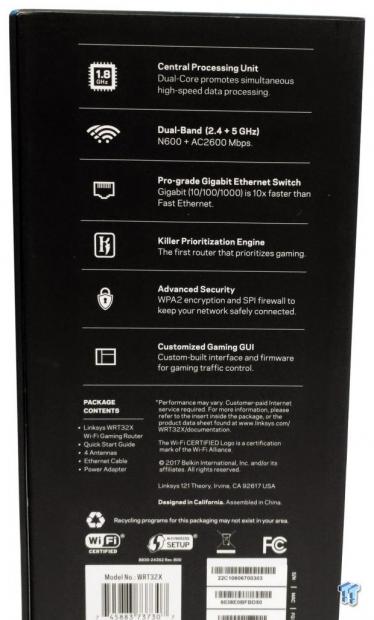 The spine goes into more detail on the features of the WRT32x. 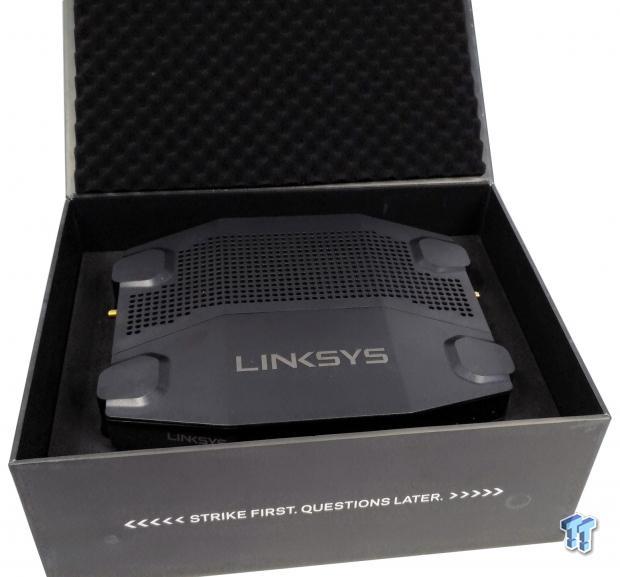 Opening the box, Linksys has put together a solid experience. The router sits on top in dense foam with the antennas and power adapter underneath. 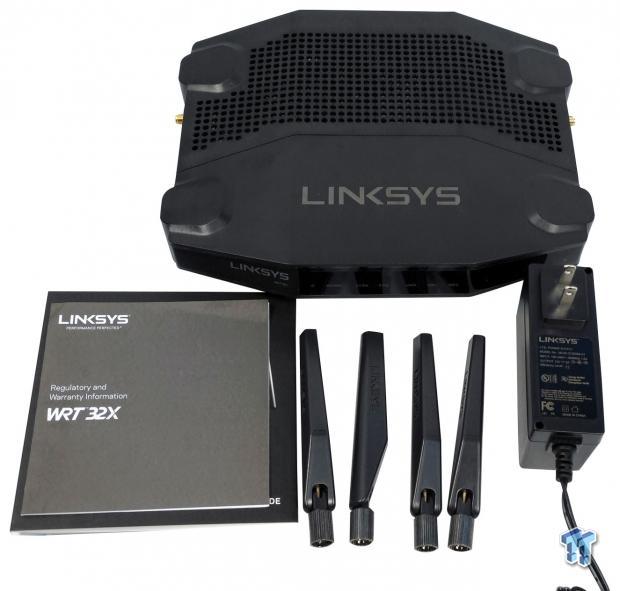 The scope of delivery includes reading materials, four antennas, and the power adapter.

Taking our first look at the router, the design is similar to previous WRT routers. As mentioned in the opening, Linksys has blacked the entire router out while the logo remains in silver. 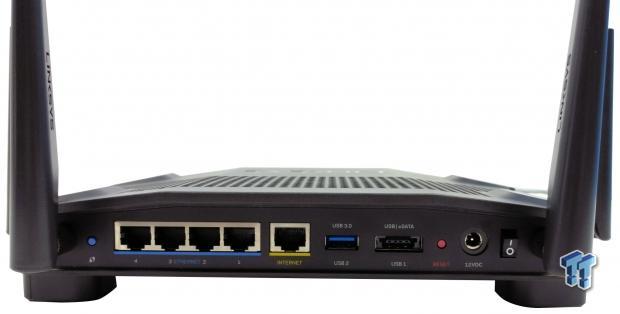 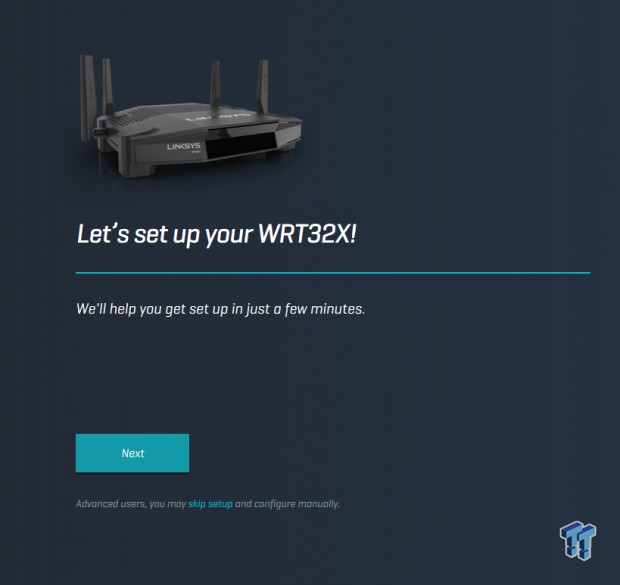 Setup of the WRT32x starts immediately after connecting to the router. It's preferred you use a wired connection for installation. 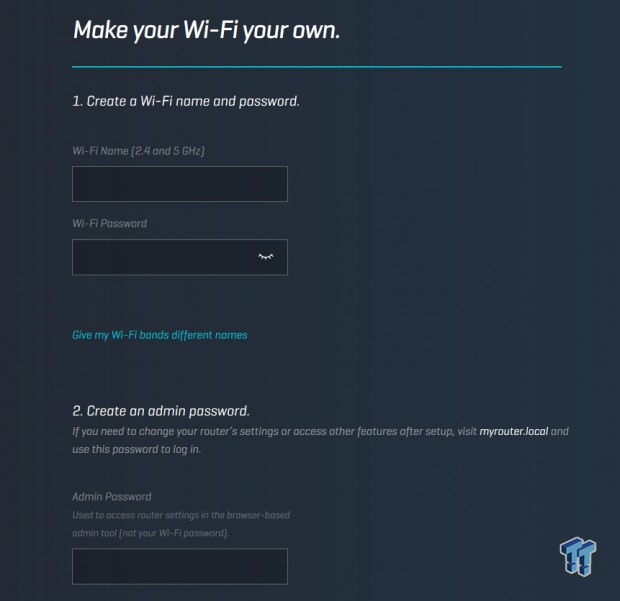 The second step allows you to name your SSID or choose to separate the bands. At the bottom, you will need to choose an administrator password. 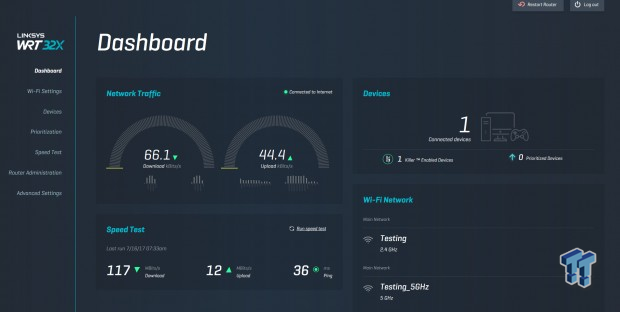 The dashboard for the WRT32x is among the best I have seen. It's very clean with real-time traffic at the top, your current internet bandwidth at the bottom, and a list of connected devices to the right. On the left-hand side, we have a list of categories and advanced setup if you need it. 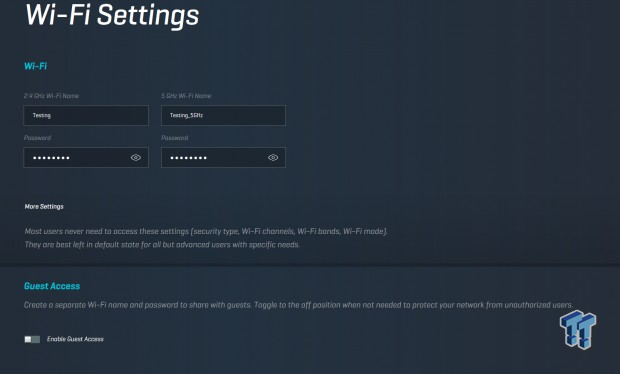 Just like the initial setup, the Wi-Fi menu allows you to setup each band with its own SSID and password. At the bottom, you can turn on guest access if needed.

The device's menu lists out what is connected, and if it has a Killer wired or wireless NIC, it will show the logo and give that device priority. 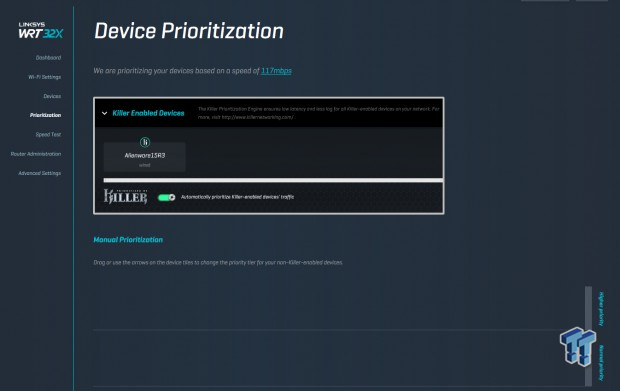 You can customize the level of device prioritization even for devices without Killer Networks NICs by dragging and dropping in the order you want them. 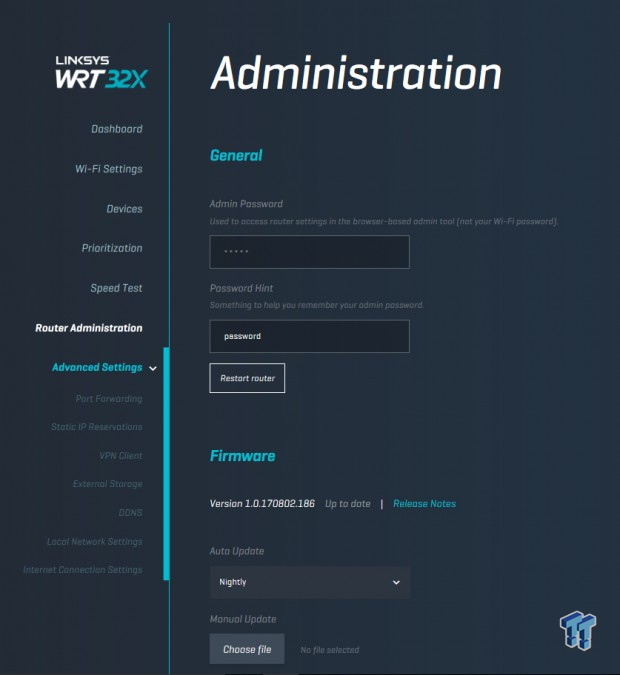 The administration menu allows you to update firmware and change the router's password. 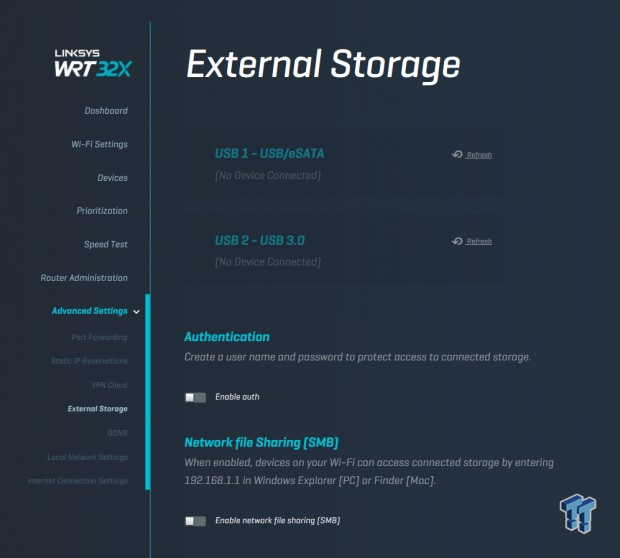 Diving into advanced settings, we have access to USB and eSATA storage devices. This is the area where you will control port forwards and DDNS if you use those features. 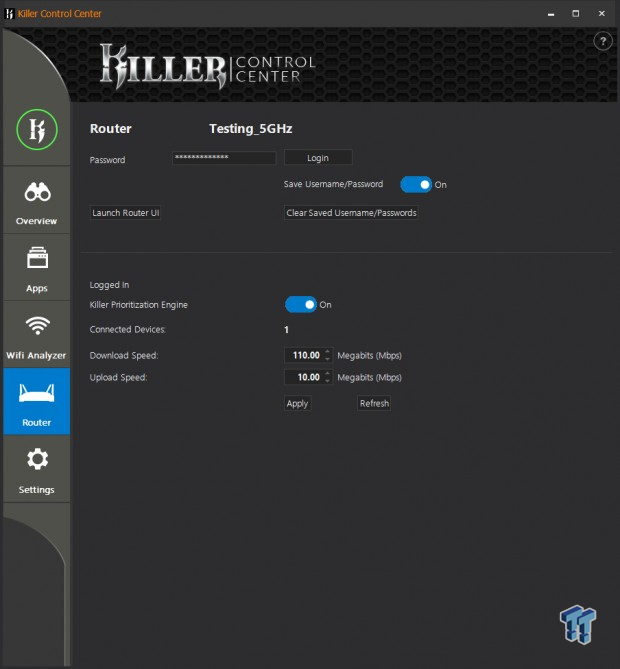 Another benefit of using the WRT32x is the ability to interface with Killer Control Center. Since I upgraded our Thunderbolt 3 test platform to the Alienware 15 R3 at the beginning of the year, I have been using KCC to enable application level prioritization, and with the WRT32x, it adds to the experience allowing you to control the router from the interface seen above. 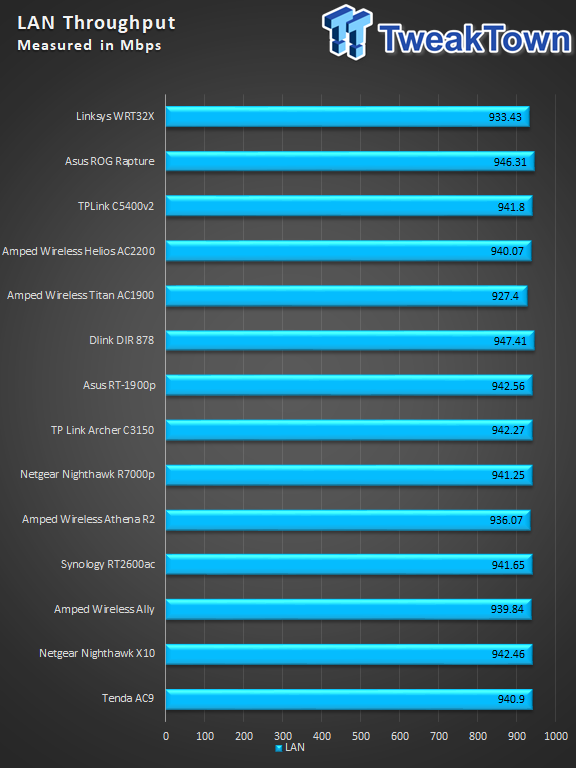 Putting the Linksys WRT32x through our standard test process, we start with LAN throughput at 933.4 Mbps. 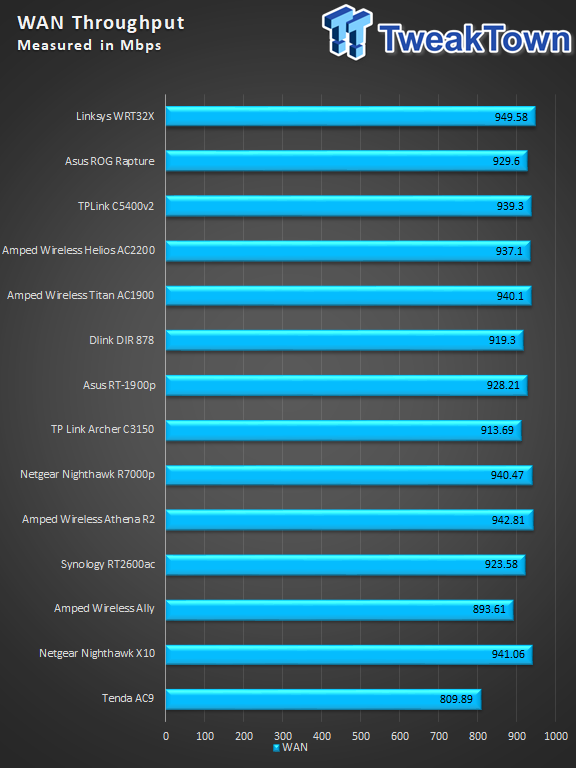 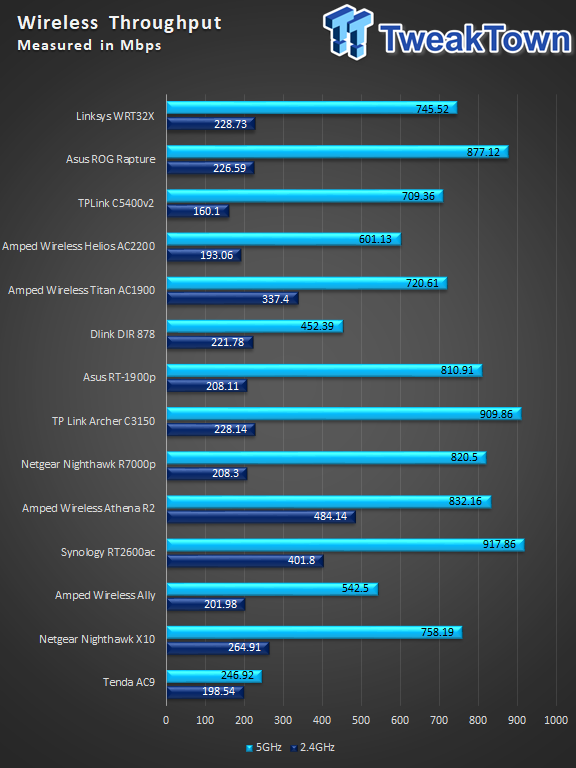 2.4GHz wireless performance gave us a nice 228 Mbps while the 5GHz band punched things up to 745 Mbps. 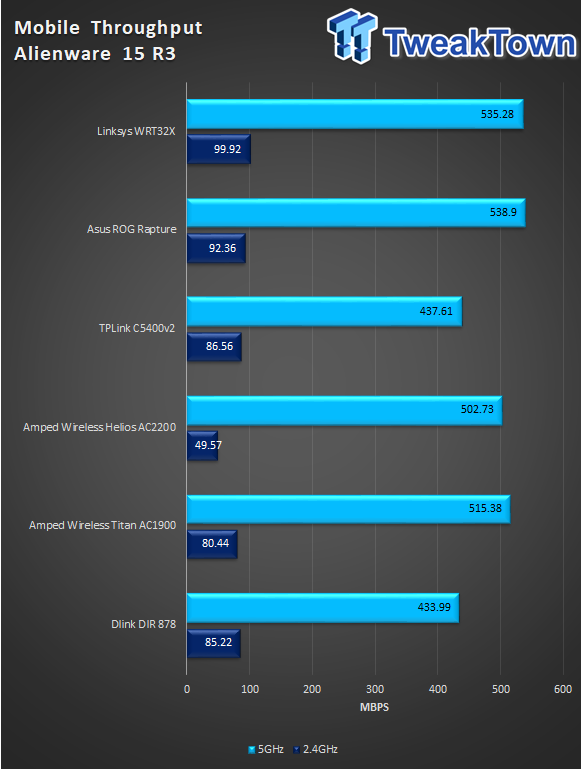 The WRT32x is our first router to undergo Mobile Throughput testing with the Alienware 15 R3. We retested some of the more recent routers for chart comparison.

Our next test for this new setup sees how range affects performance. With this, we start at 10Ft and move out to 30Ft. Routers are tested in their default configuration for this part; the client device is the Alienware 15 R3 with the Killer Networks 1535. 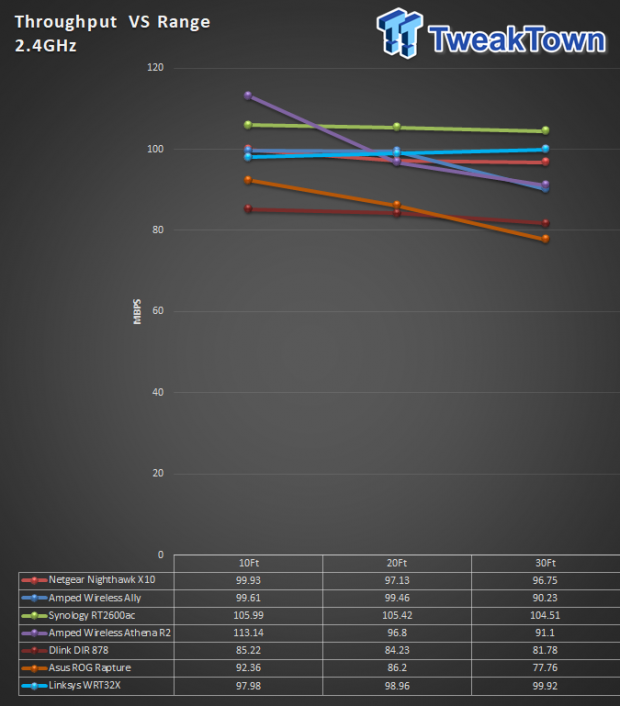 The WRT32x started off the range test at 97 Mbps and finished at 99.92 Mbps, holding steady performance throughout. 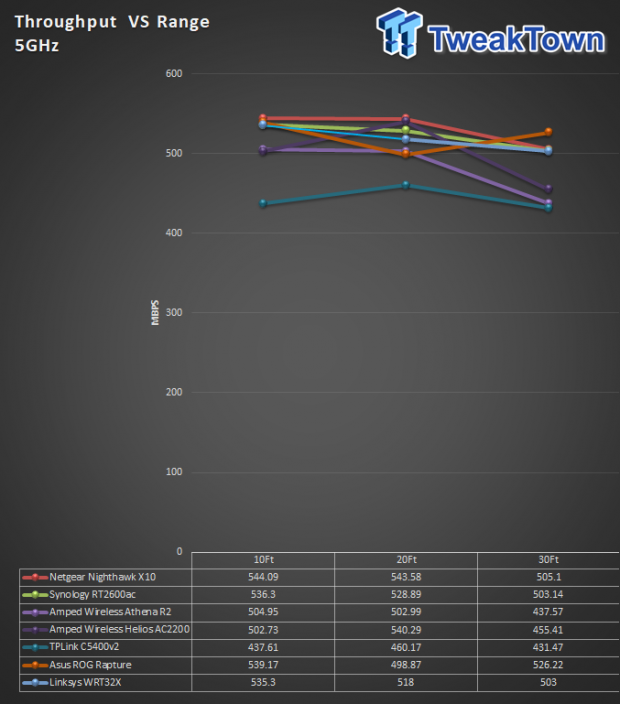 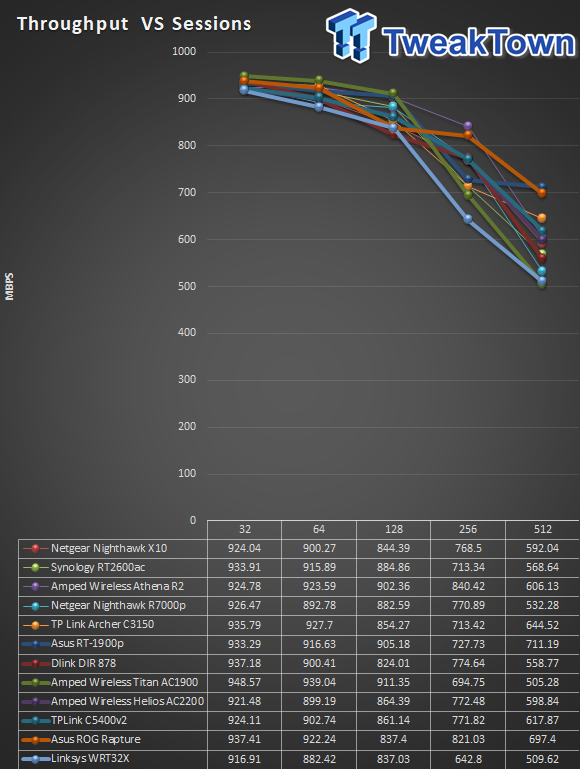 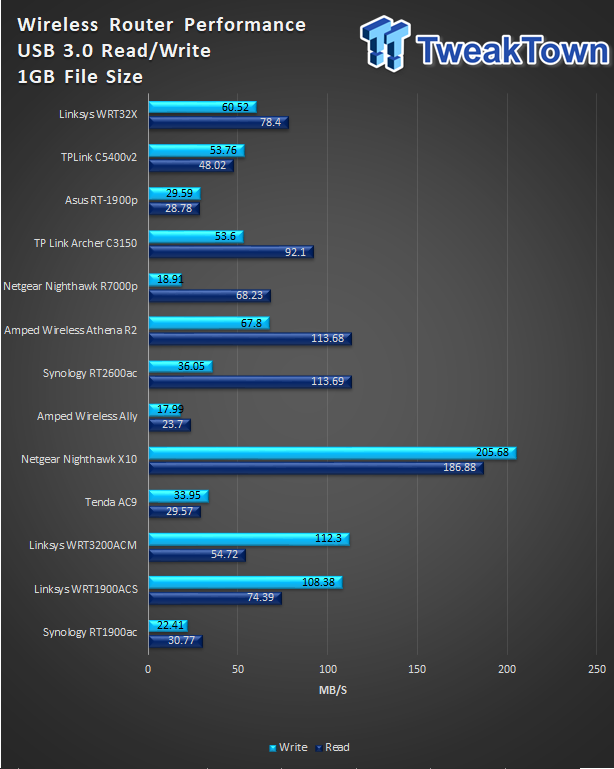 Storage performance for the WRT32x gave us 78 MB/s read and 60 MB/s write.

I'll start this by saying my office network is typically run with an Ubiquiti ERL Lite and Unifi AC LR AP. For comparison in gaming tests, I put my standard network, the Ubiquiti setup, up against the WRT32x and its Killer technology. I used my gaming notebook, the Alienware 15 R3 and its Killer E2500 and 1535 Wireless to test both situations.

The test consists of running a game while simultaneously loading your network with traffic, in my case I had four 4K YouTube videos on a loop in the background. 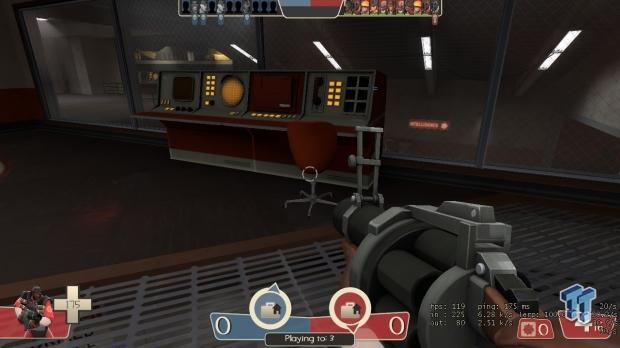 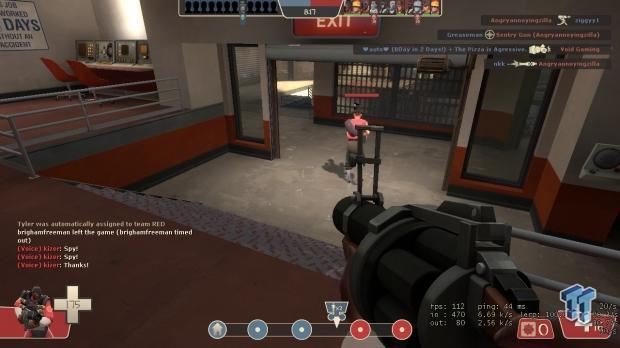 What we have above is a game of Team Fortress 2, freely available on Steam. We use the console or ~ key with the "net_graph 1" command to show the latency, PS, and others during the match. 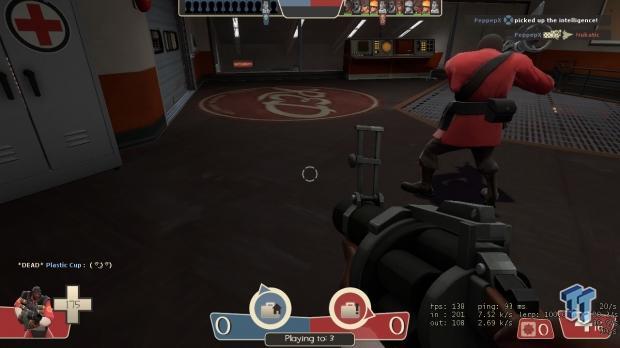 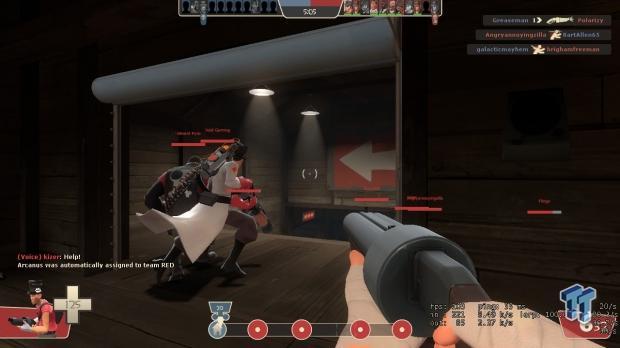 The WRT32x is easily my favorite WRT to date and I think that says a lot because I have owned all iterations, some multiple times. The build quality is on par with the best in the market and further, I love the all black, silver logo of the WRT branding on this solution.

Setting this unit apart is the Killer prioritization which for gamers nearly all gaming notebooks have at least a 1435 or 1535 Killer NIC, and some like my Alienware have the wired NIC as well. This is being seen even more with desktop platforms too with the AMD X370 motherboard platform offering several options that include Killer technologies.

Performance as a router was quite solid. I had peak LAN throughput at 933 Mbps, and WAN throughput touched 929 Mbps. Wireless performance was quite good as well, 2.4GHz offered 228 Mbps with 5GHz topping out at 745 Mbps. Mobile throughput was solid with the AW15 and peaked out around 530 Mbps while range testing showed consistency on the 2.4GHz band and only a small performance loss for 5GHz at 30Ft.

I think the gaming test completed here will be the most relevant for consumers that want to purchase a solution like the WRT32x as most will already have a gaming machine like a Razer, Alienware or MSI notebook, or be in the market for a motherboard with Killer technology packed into it. That's not to say the WRT32x doesn't work well with non-Killer devices, for those devices it will just take manual setup to reap similar benefits.

Apart from this, I am pleased with how clean the interface is for the WRT32x; it's very simple to see what's going on and manage your devices right from the dashboard with a few clicks.

The Bottom Line: For those in the gaming community that use Killer NICs on a daily basis, the Linksys WRT32x is a game changer. For those that don't, well, you are falling behind.