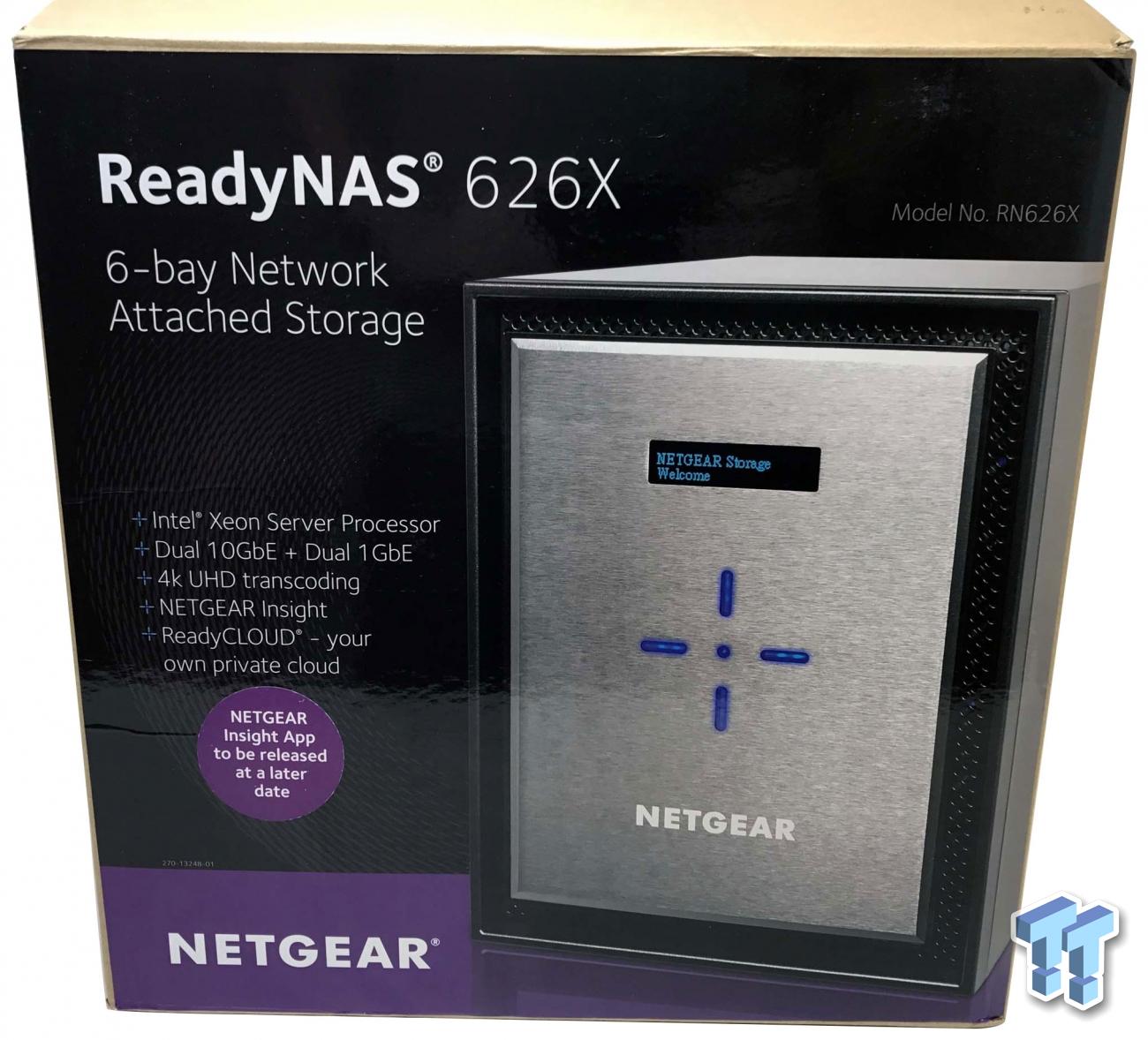 We have seen a good number of SOHO platforms come from the NETGEAR ReadyNAS lineup but with the buildup of our 10Gbe network earlier this year and the inclusion of the powerful XS708T as the backbone of our new network, it was only right to see what NETGEAR had to offer on the business side of things. We start with the 626X, and later we plan to look at higher spec models as well.

Like many solutions before it, the 626X takes advantage of NETGEAR's ReadyNAS platform firmware. This platform as we call it is structured more towards data storage and not so much on the media or secondary PC front. With that said, the RN626X is an Intel platform NAS solution but goes away from the typical SoC we see in entry-level solutions. Having its roots in business, this platform wraps itself around an Intel Xeon D1521 processor. 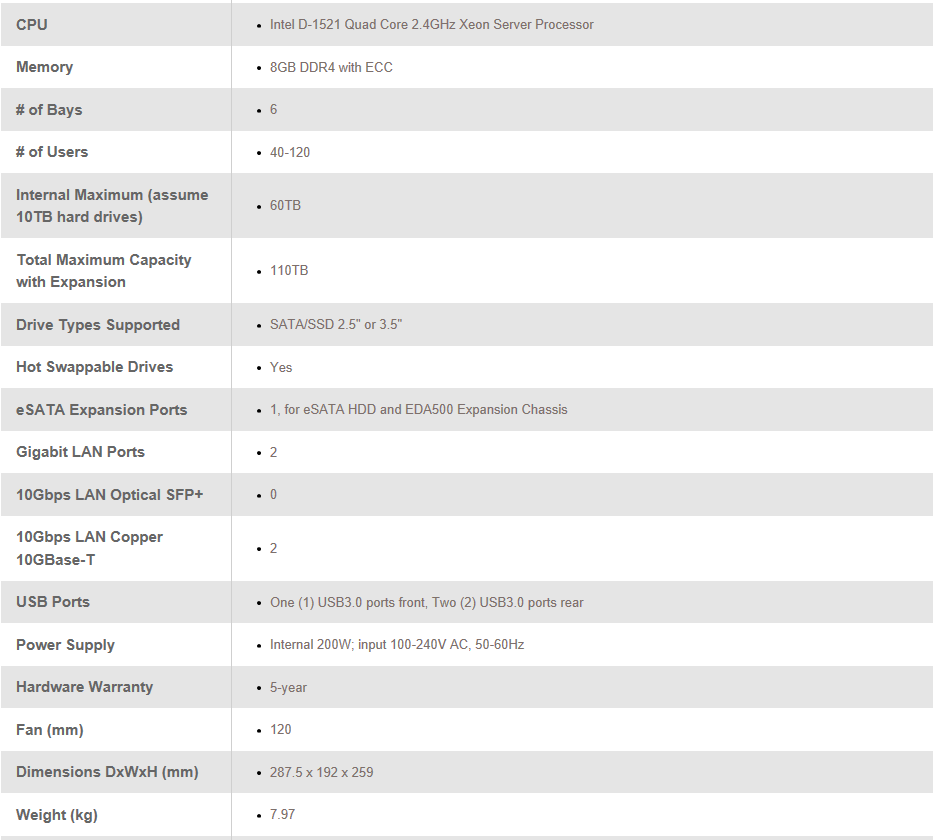 Diving into the full specifications list, we see at the top the quad-core Xeon D1521 which does have HT technology enabled for eight threads. This CPU operates at 2.4GHz and is setup with 8GB of DDR4 with ECC, and it's a six-bay platform with support for 120 users.

Maximum capacity is setup at 60TB using 10TB drives with that ballooning up to 110TB with expansion. Supported drives include both 2.5" and 3.5" in HDD and SSD form factors. The expansion is accomplished via the EDA500 chassis and the single eSATA port found on the unit.

Connectivity includes two 1GBe Ethernet ports and two 10Gbe copper ports. USB 3.0 is included with two ports found on the rear and one on the front. The power supply is internal to the system at 200W with a large 120mm cooling fan keeping the unit cool.

The MSRP of the NETGEAR ReadyNAS 626X in its diskless form comes in at $1799.99 with a five-year warranty.

Packaging is quite colorful. We have an image of the NAS itself to the right with leading specifications listed on the left side. 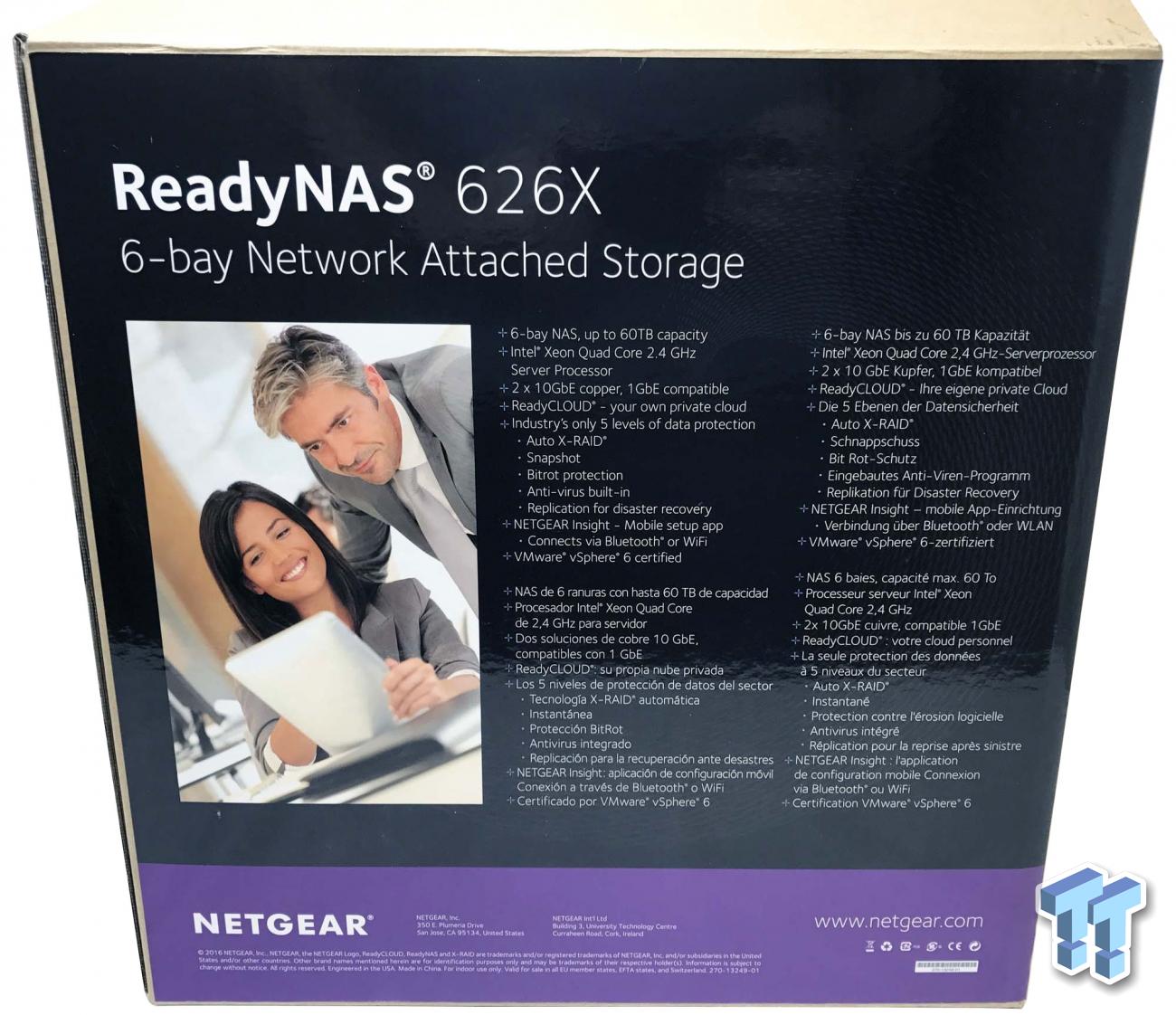 On the backside of the box, you will find a full hardware specifications list in several languages. 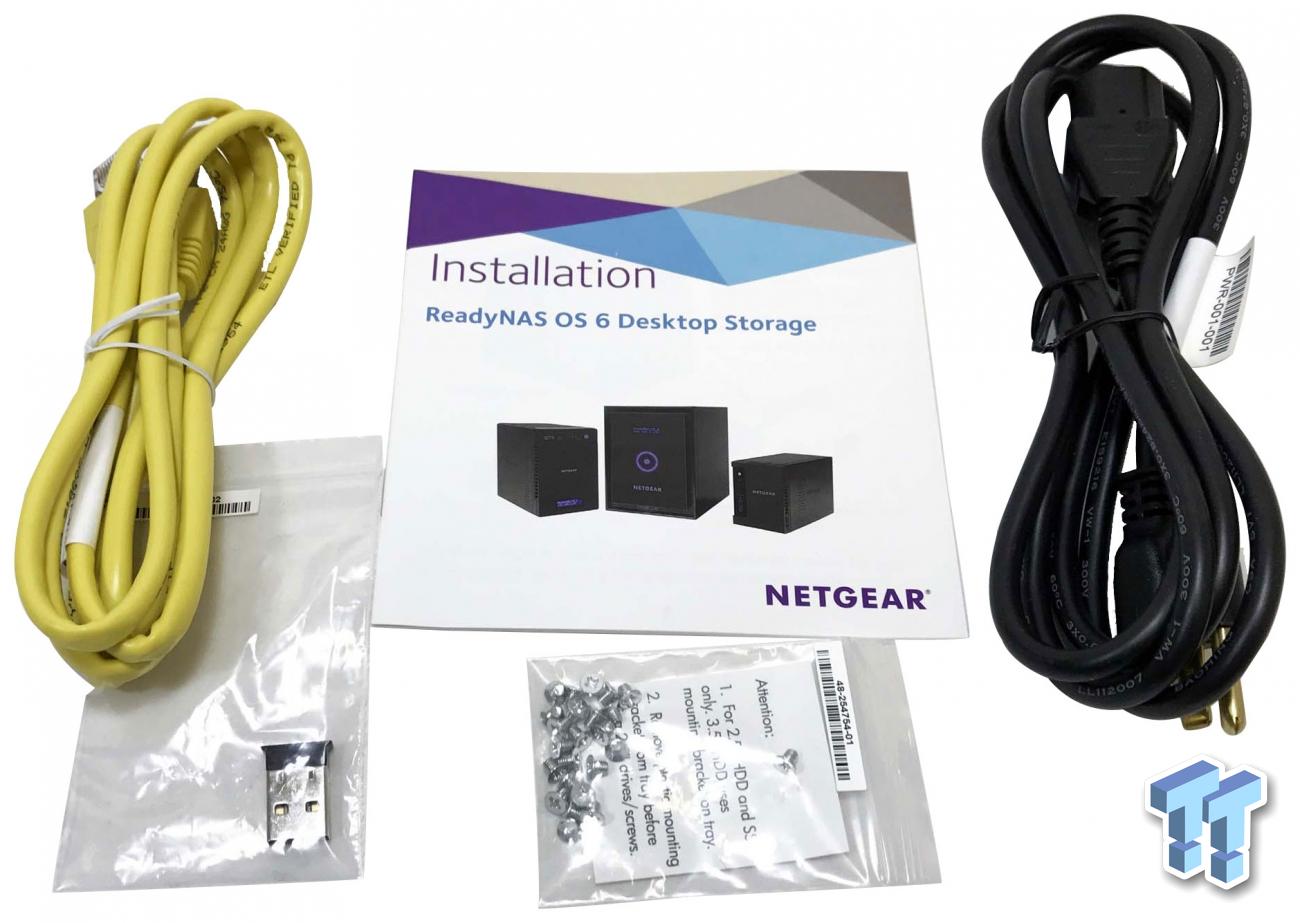 The scope of delivery for our sample included the ethernet cable in yellow and power cord to the far right. It did include drive screws and firmware on a USB key as well. 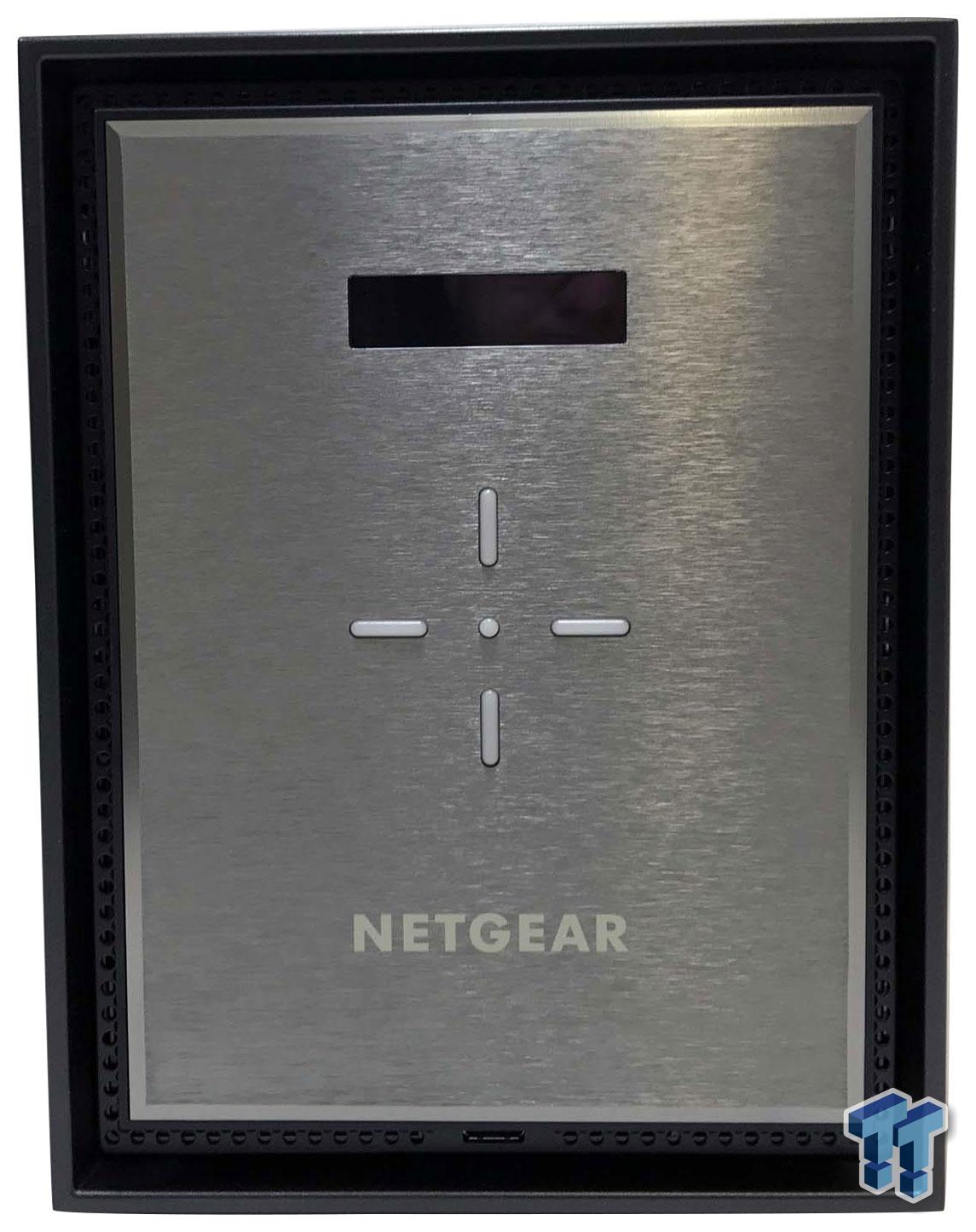 The front of the NAS houses a thick door panel covered in brushed aluminum. The LCD panel can be seen through the door. 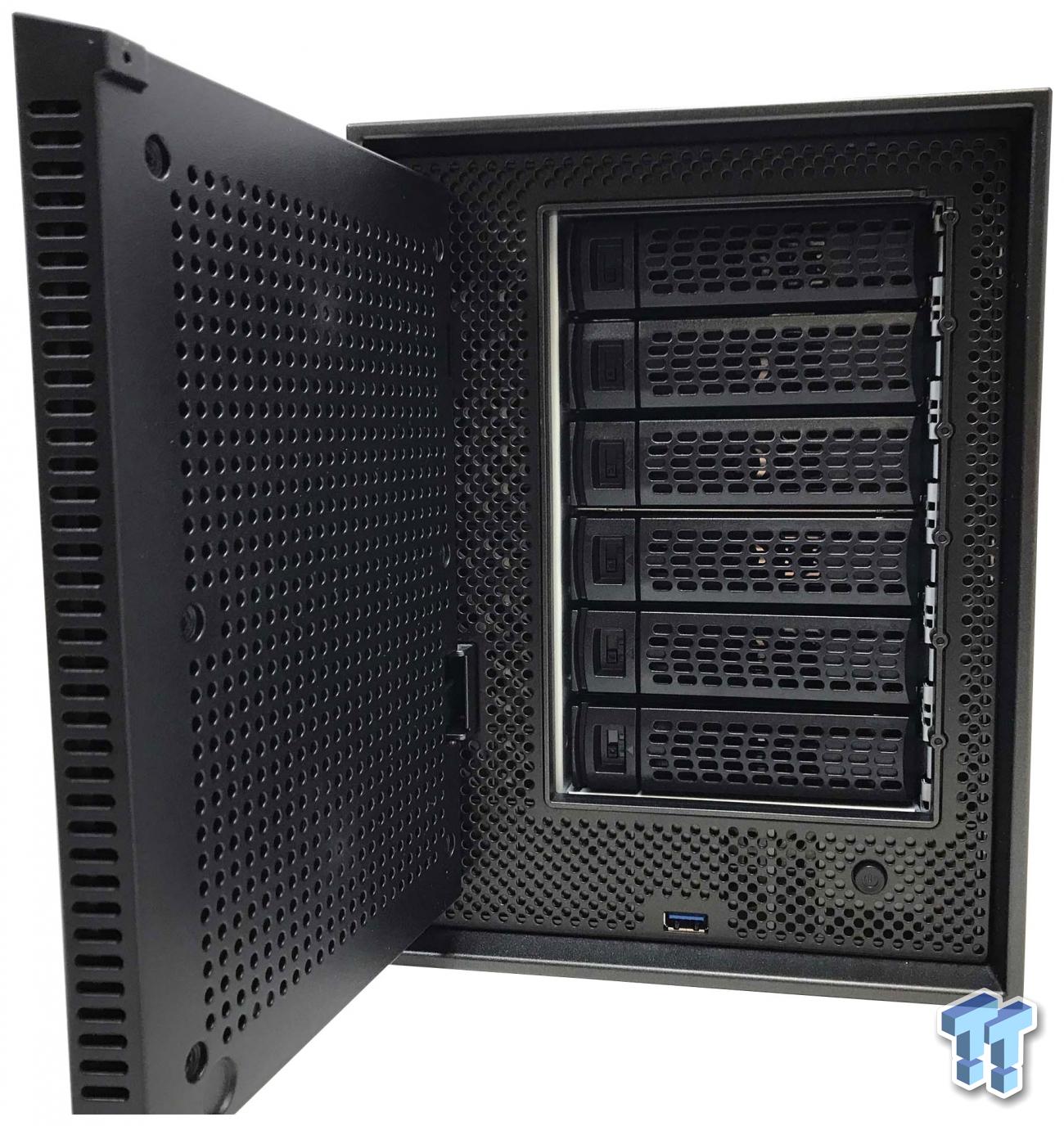 The drive bays are tucked away behind the door with a simple locking mechanism in each. 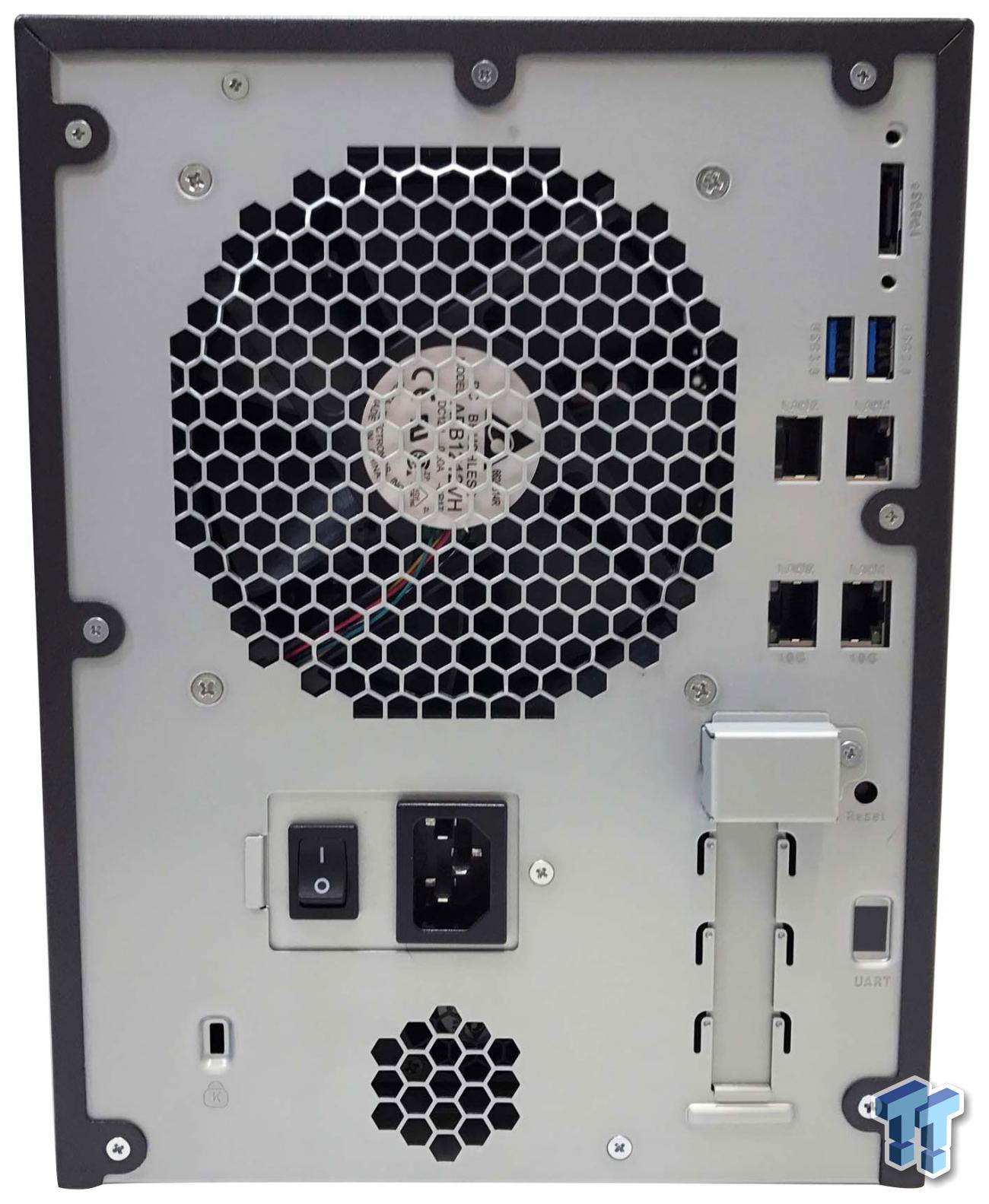 On the back of the unit, we start with eSATA at the top. This is followed by USB 3.0 and two Gbe ports. Moving down, we have dual 10Gbe ports and PCIe expansion. 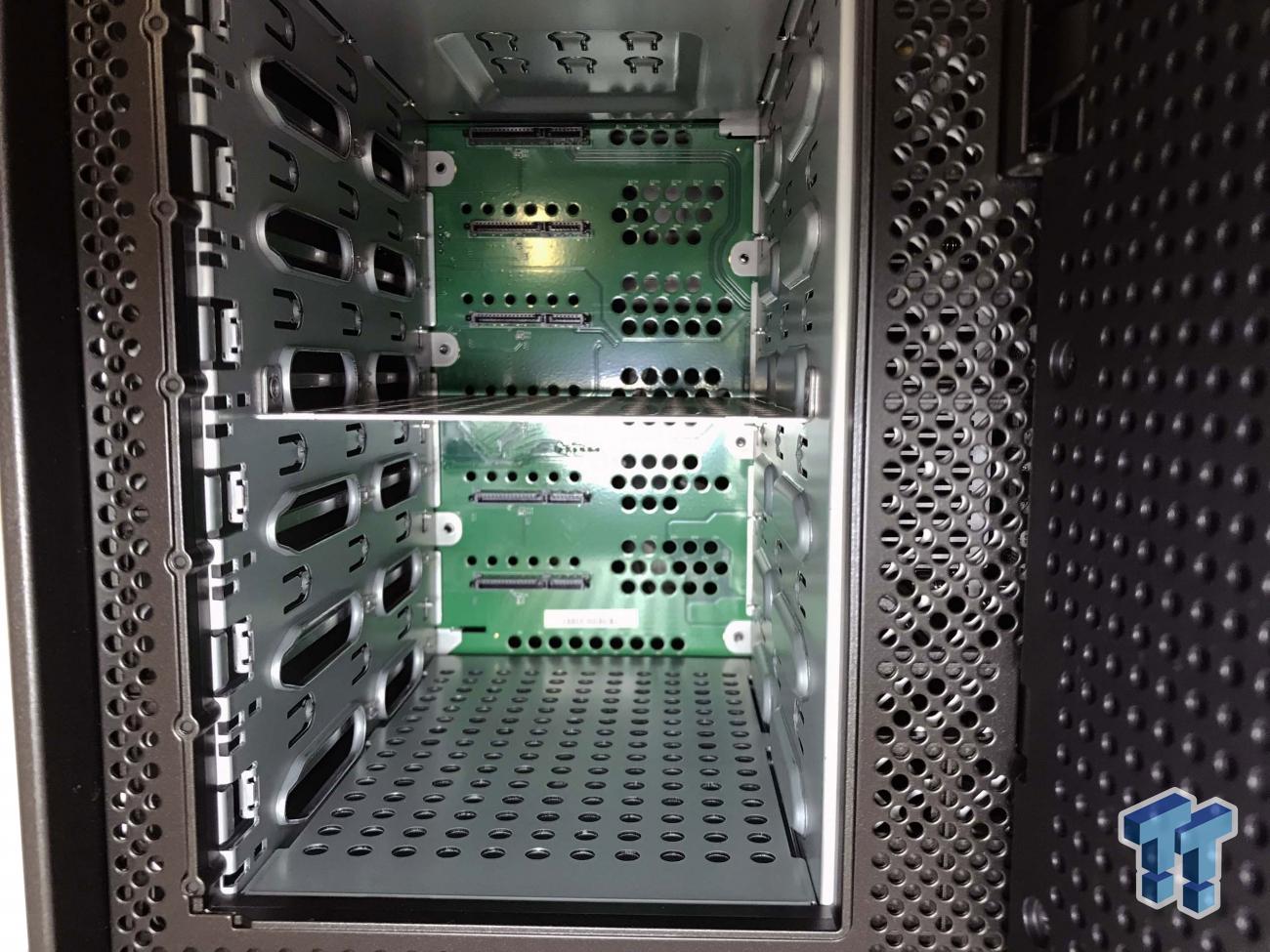 The backplane for the 626X is SATA only, which does come as a surprise being such a high-end unit. 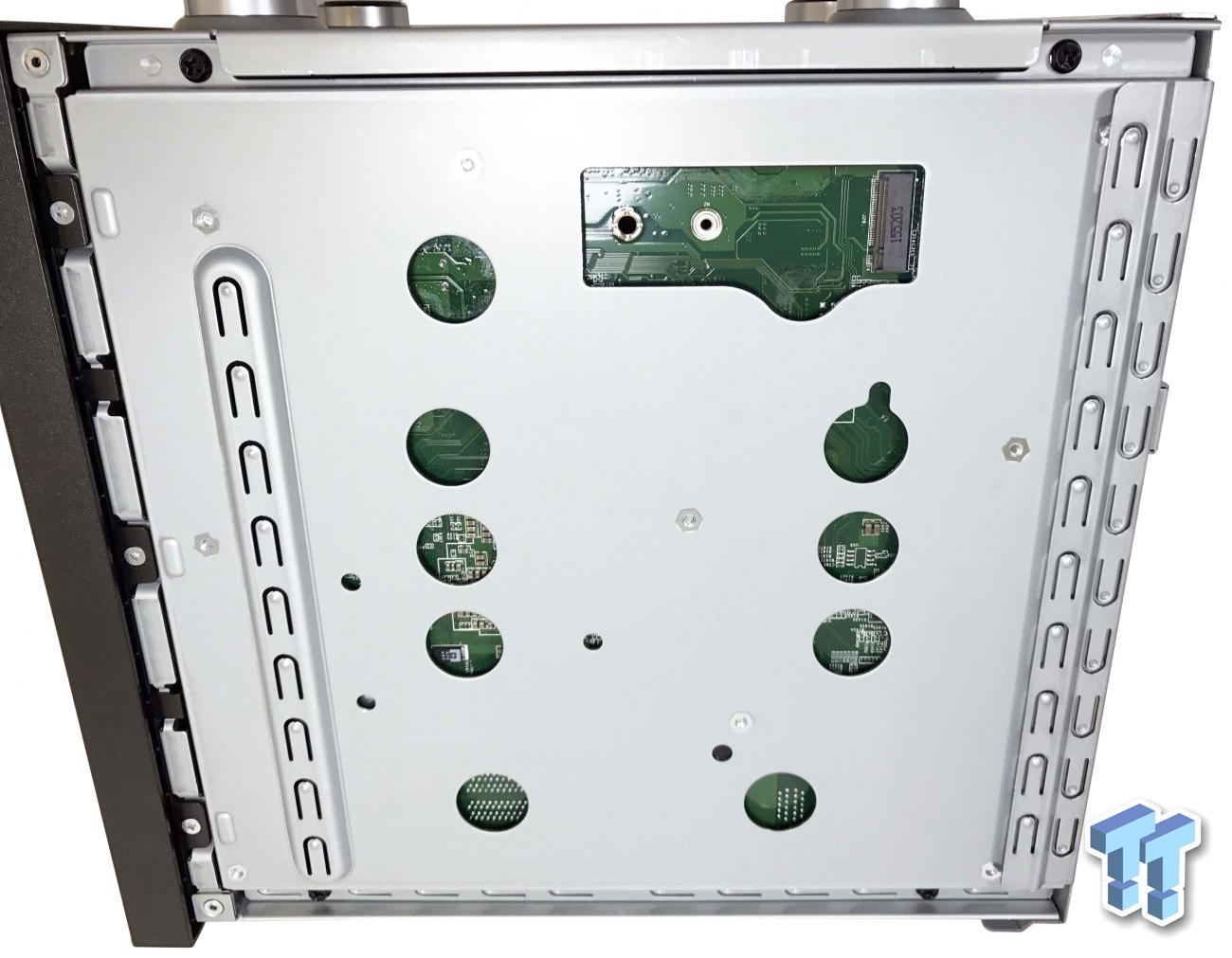 Removing the chassis cover, we ran into a 2240/60 m.2 slot on the back of the motherboard. 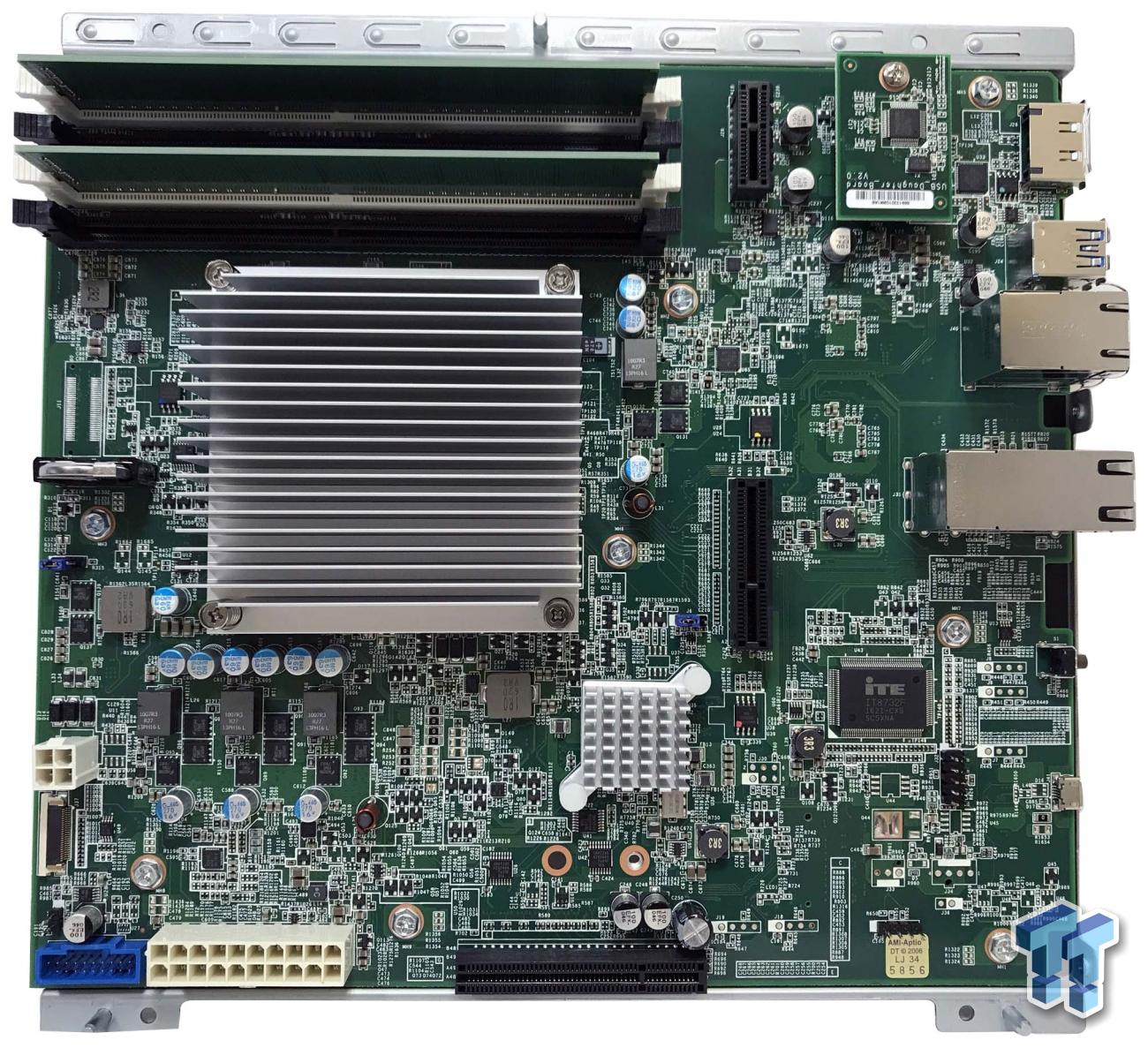 For the most part, the 626X uses a small form factor PC motherboard, it does appear to be a custom design but does include full-length DDR4 slots. 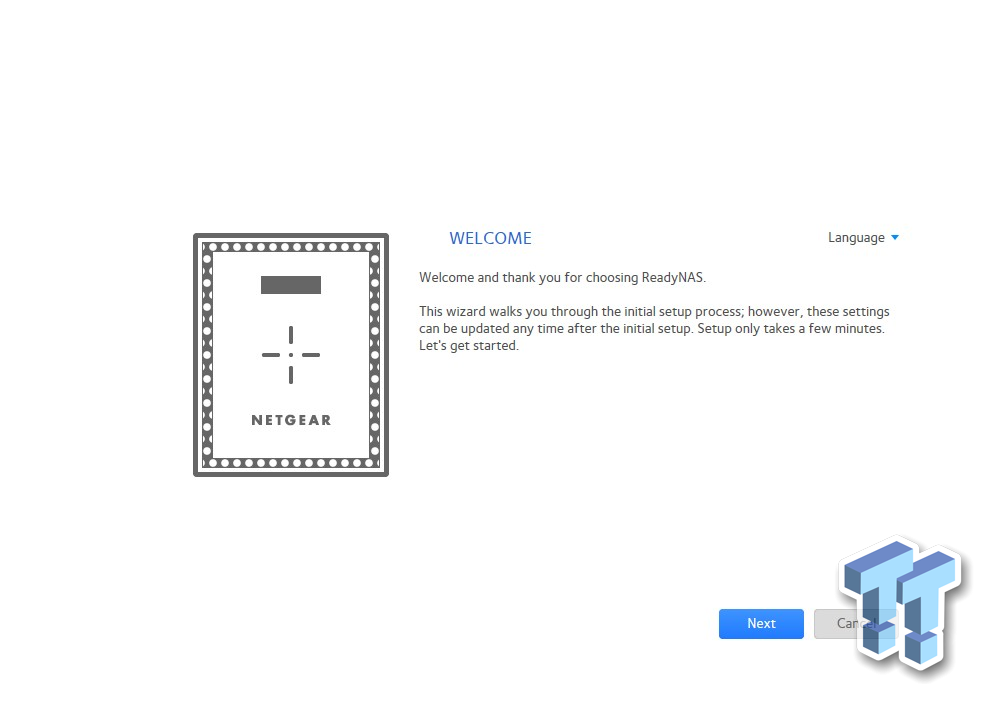 ReadyNAS setup takes just a few minutes. We start with the wizard seen above. 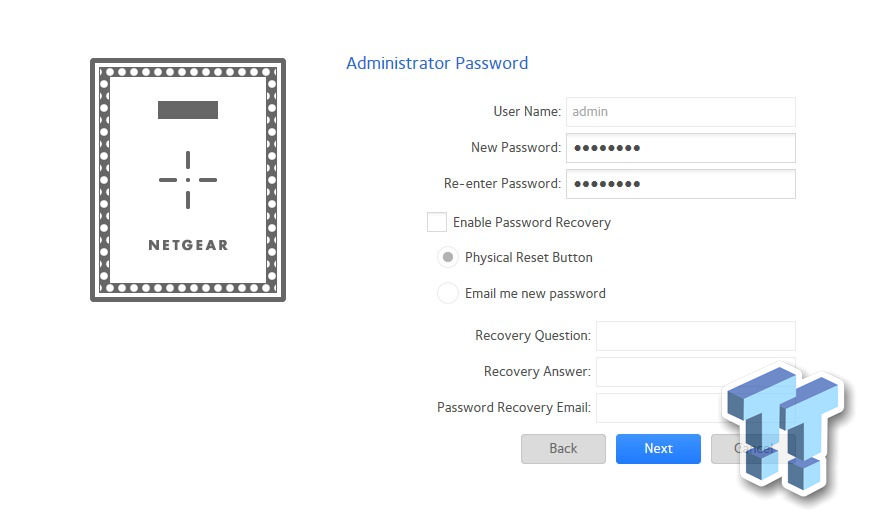 During setup, you have the chance to setup the admin password along with email recovery should you ever need to use it.

Once setup is complete, you will be let off at the dashboard above. This initial menu gives you a quick overview of the device and any volumes on the NAS.

Moving over to volumes, you see your drives installed listed in the center with capacity and RAID array type listed to the left. To create an array, you will see the menu to the right.

The Performance menu shows you the temperature for each drive along with system and CPU. Towards the bottom, there are graphs for network and volume activity.

Moving over to settings, you can see the services enabled along the top with an update string below. You can save your NAS configuration below that and enable alerts at the very bottom.

The shares tab gives you access to creating and managing DATA shares on the NAS.

Here you see the four ethernet ports built in on this platform. As you can see, we have a 10Gbe link. 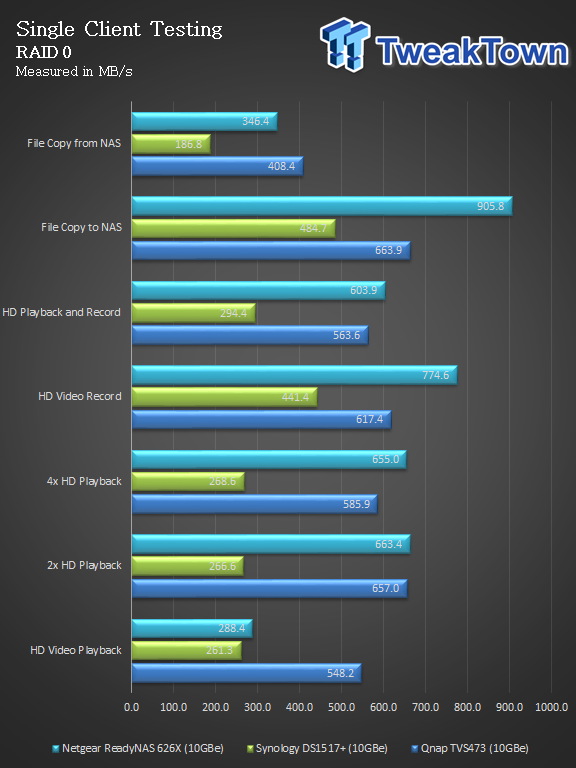 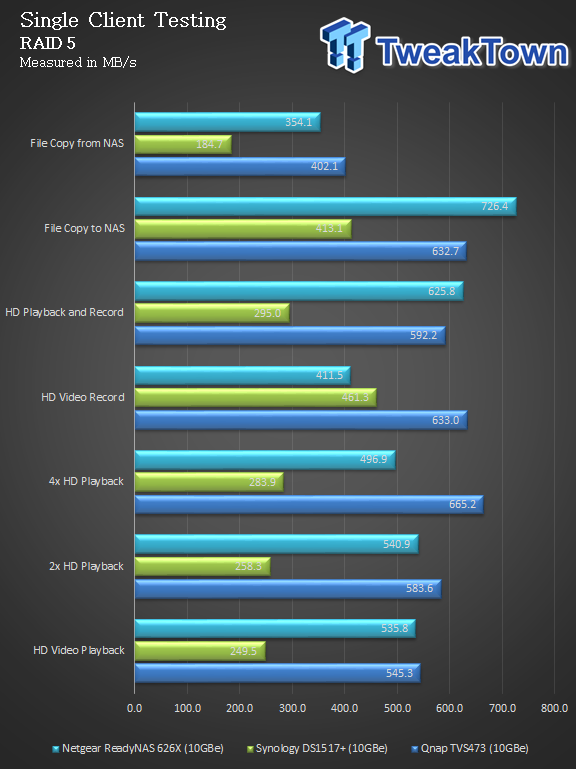 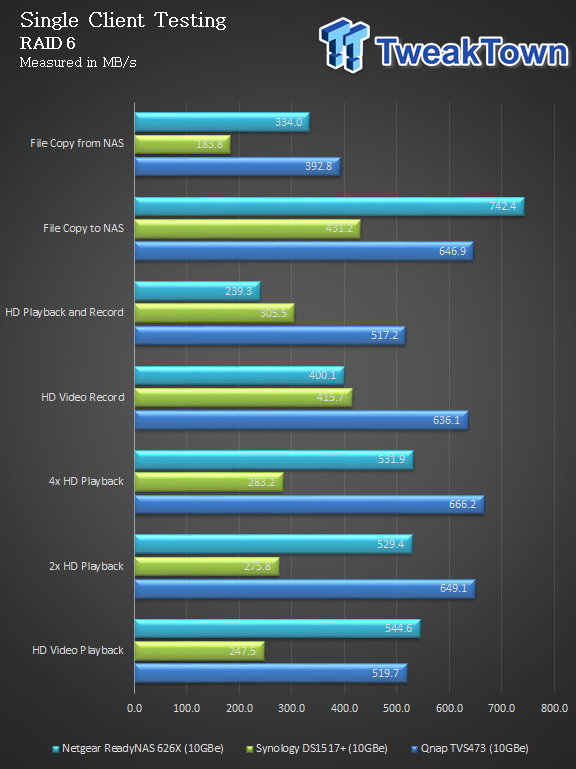 Our Sequential read/write workload is centered on 128K transfer sizes with a Queue Depth of 128. 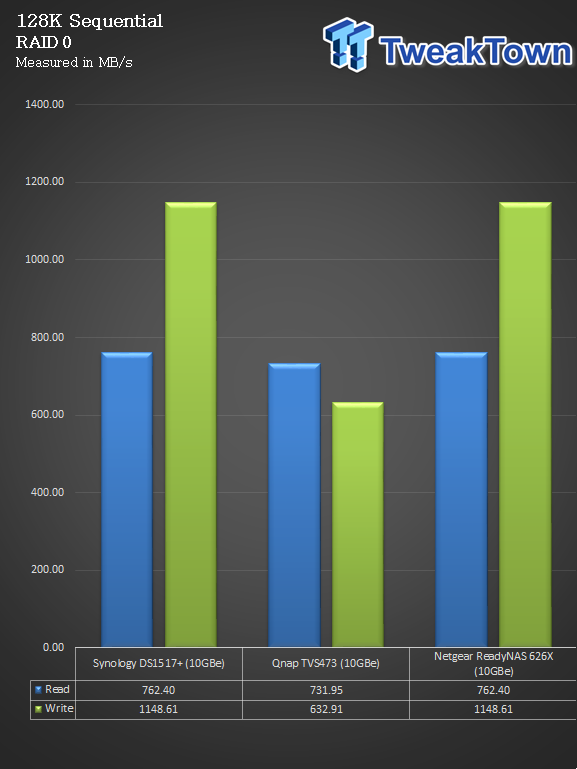 Sequential performance via RAID 0 had some rather impressive numbers. We reached 762 MB/s read and 1148 MB/s write. 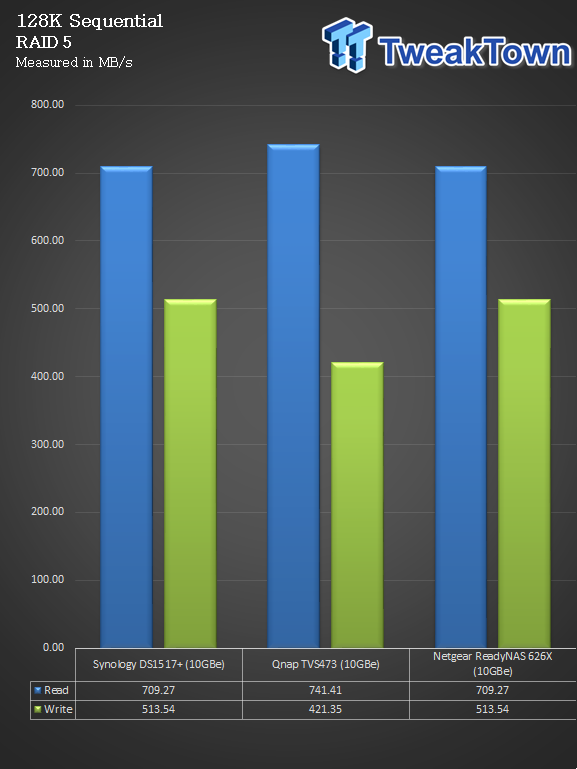 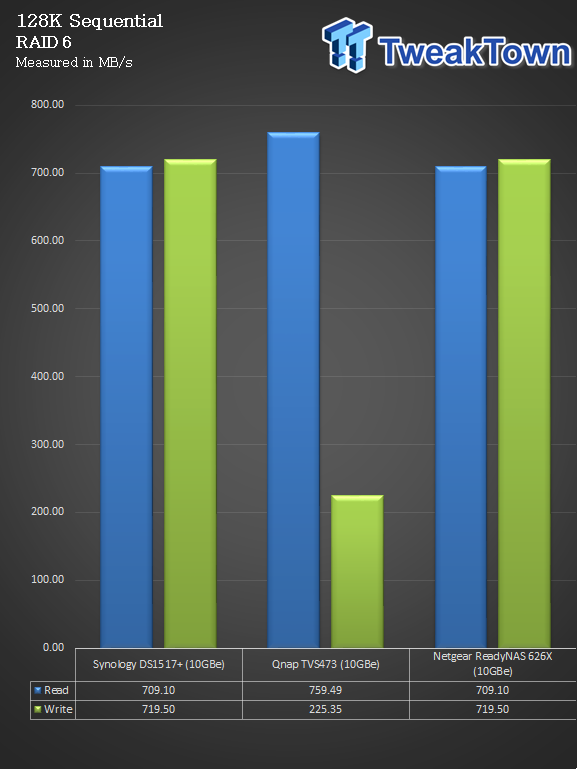 The performance with our RAID 6 array touched 709 reads and 719 MB/s write. That's in line for the most part with other 10Gbe NAS platforms which we have tested. 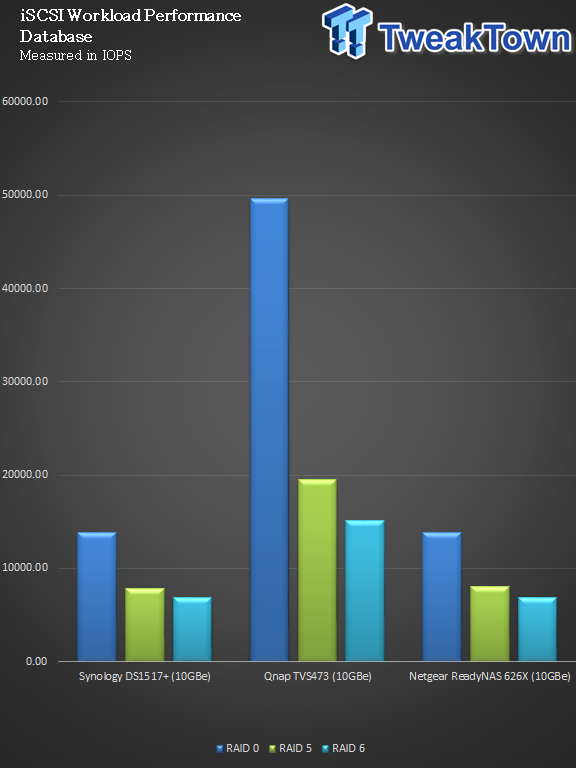 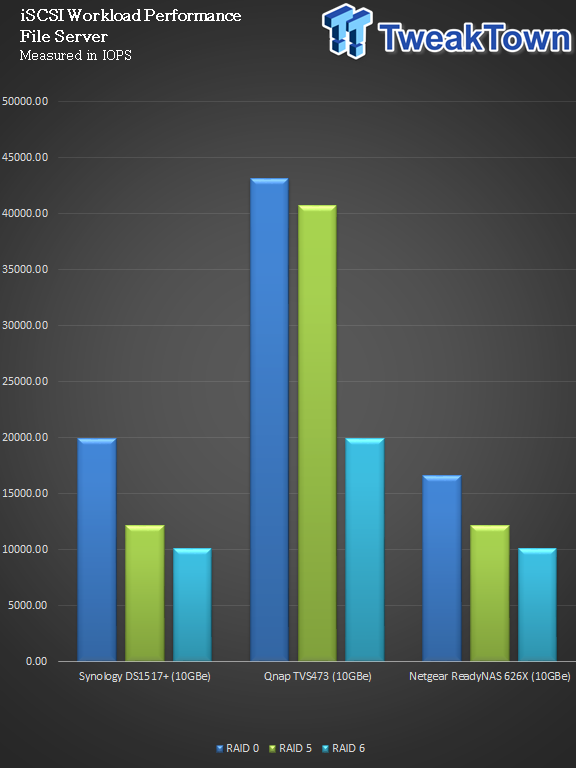 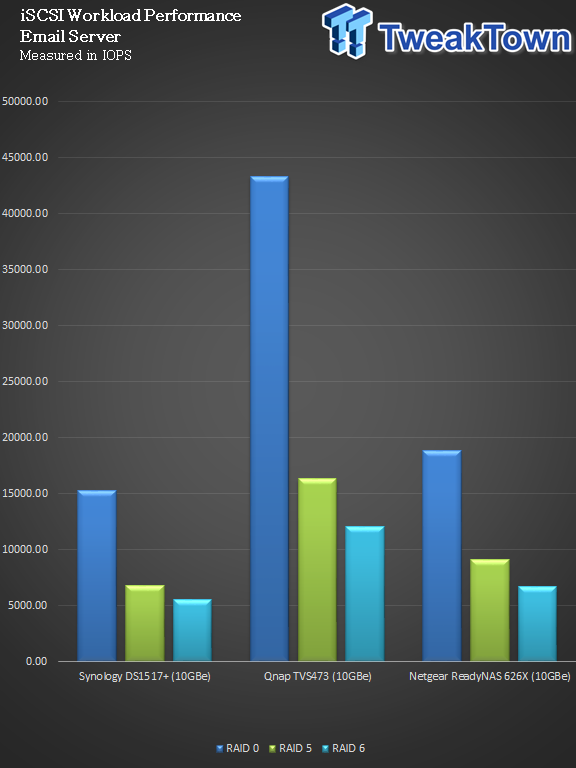 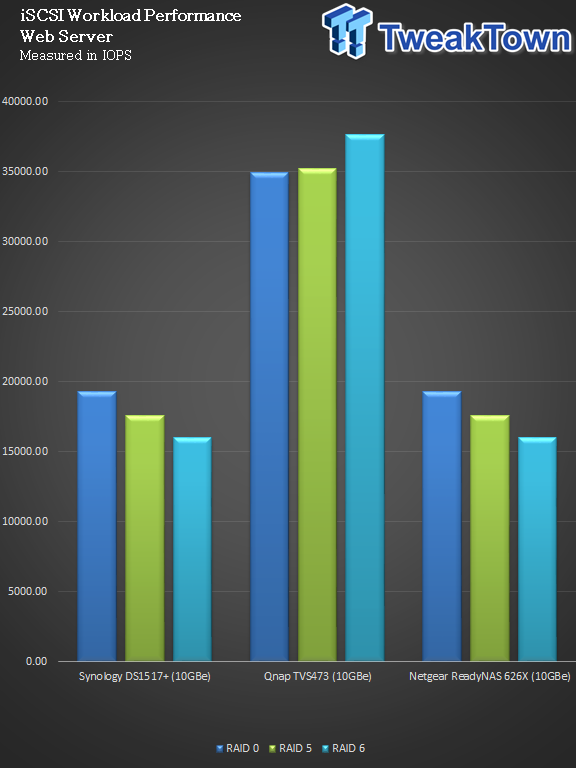 Web Server was a clear winner for the 626X as it reached 19K IOPS with RAID 0. 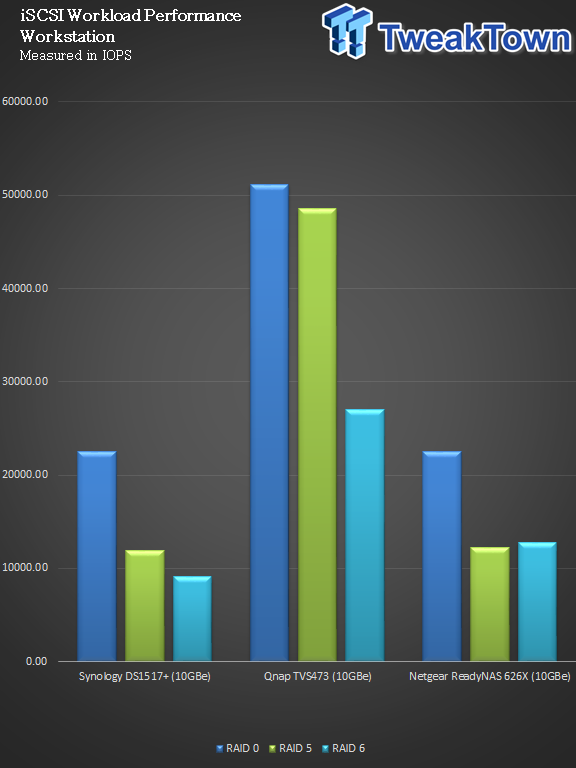 Last, we had workstation typically where we see a performance jump up with NAS platforms. With the 626X, RAID 0 topped out at 23K IOPS with 5 and 6 hovering around 11K IOPS.

I was really surprised with the performance of the NETGEAR ReadyNAS 626X. To be honest, I expected to get a little more out of it with mixed workloads we ran through it. With that said, it could all be on the firmware release we tested on. Build quality, however, left me quite pleased. I was happy to see a full-on metal shell covered by even more steel and topped off with tool-less drive trays and aesthetics via the brushed front panel. The built-in LCD is on a constant rotation and doles out information about the NAS and its status.

The ReadyNAS platform as a whole is more storage driven than any other platform I have tested. NETGEAR doesn't deal in making their appliances act as a second PC. That makes navigation within the user interface rather smooth and familiar especially for those that have used any of their products in the past including routers. Even so, NETGEAR does offer a few options for applications, one being Plex Media Server along with its download station app just to name a few.

The performance of this appliances was superb in both Single Client testing and sequential throughput. First, a single client showed our highest rate yet with File Copy topping 900 MB/s to the NAS. We also broke a few records with Video Record and Playback reaching 775 MB/s and 650 MB/s, respectively.

Over in sequential throughput, the 626X didn't disappoint reaching the peak of 1148 MB/s in write performance and 762 MB/s in reading. Single and dual redundancy showed solid performance too dropping just 50 MB/s on reading throughput.

Overall, the ReadyNAS RN626X is top to bottom a data storage tank. With its MSRP at $1799 empty, it will take some convincing for some, but for anyone needing awesome and pure storage capability, NETGEAR stands behind this solution with a five-year warranty.

The Bottom Line: While NETGEAR's ReadyNAS 626X doesn't come with all the apps available on some models, it's a pure data storage tank that offers very solid performance and 10GBe capability.