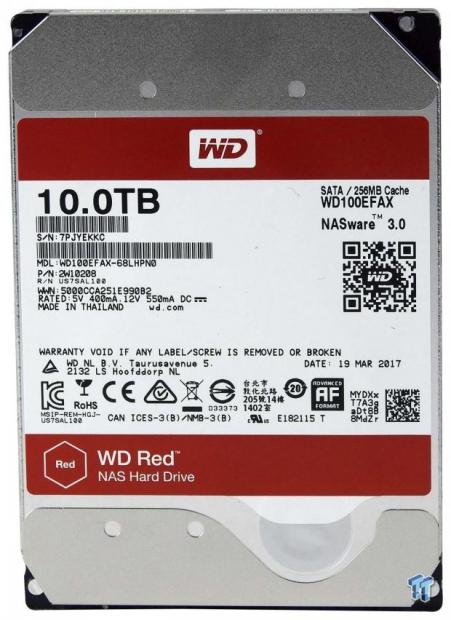 Over the last five years, hard drive capacity has bloomed. In 2013, WD launched the 4TB Red series, and after a year they pushed that to 6TB. It took the industry two more years to get the 8TB, and now a single year later we have 10TB drives and the promise of 12TB very soon.

Like the previous model, the latest addition to the Red family of drives offers NASware 3.0, an updated version of the technology that aims to increase reliability and improve performance. WD has also brought in new technology with the expansion to 8 and 10TB solutions, HelioSeal makes helium filled drives possible eliminating turbulence allowing more disks and heads to operate in the same 3.5" package.

In addition, drives spin easier in a helium filled environment, lowering overall power consumption. 3DActive balance has been a staple of the Red family among others, and the 10TB takes advantage of this technology to increase longevity and drive performance. 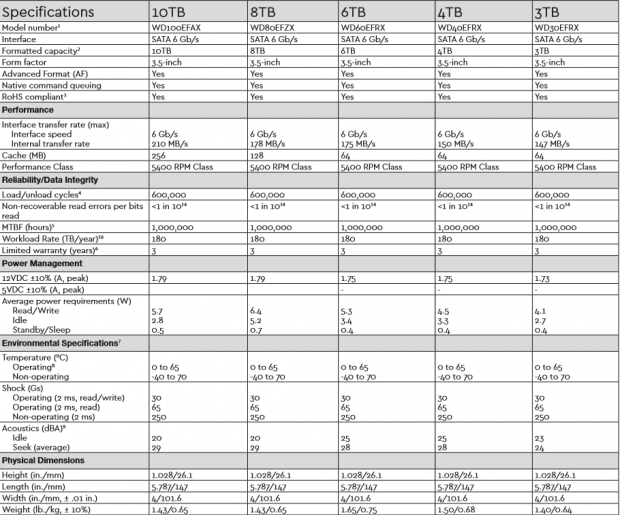 The WD Red family is split into performance classes. The WD Red offers capacities from 750GB to 10TB designed and tested for one to eight bay NAS systems while the WD Red Pro offers 2TB through 10TB options fit for NAS systems up to 16 bays. Looking at the specs above, the 10TB solution carries a SATA 6Gb/s interface with an internal transfer rate of 210 MB/s. 256MB of cache compliments this drive while it sits in the 5400 RPM performance class. Reliability is outlined with a one million hour MTBF and 600,000 load/unload cycle rating. The workload rate of the standard WD Red sits at 180 TB/year.

Power consumption starts with a 1.79A rating with average consumption sitting at 5.7 watts, idle at 2.8 watts and sleep using just 0.5 watts. Drive noise for those concerned reads at 29dBA on average with a 20dBA idle reading.

Our drives arrived in bare form. The design follows that of the 8TB model reviewed a year ago. On the front, we have the Red branding and capacity listed at the top in bold print. To the right are the connectivity and cache listings and below the NASware 3.0 and QR code. 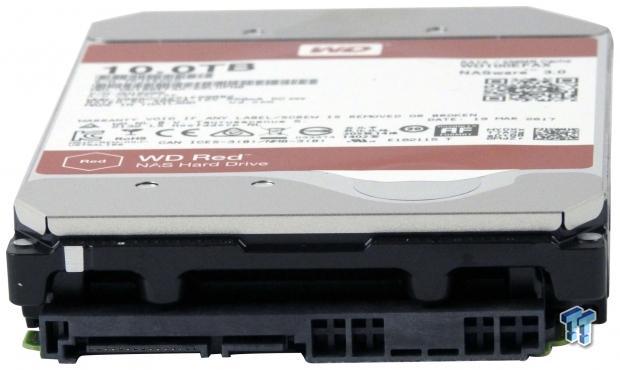 The SATA interface includes the power to the left and data to the right with placement pins on the far right for some backplanes. 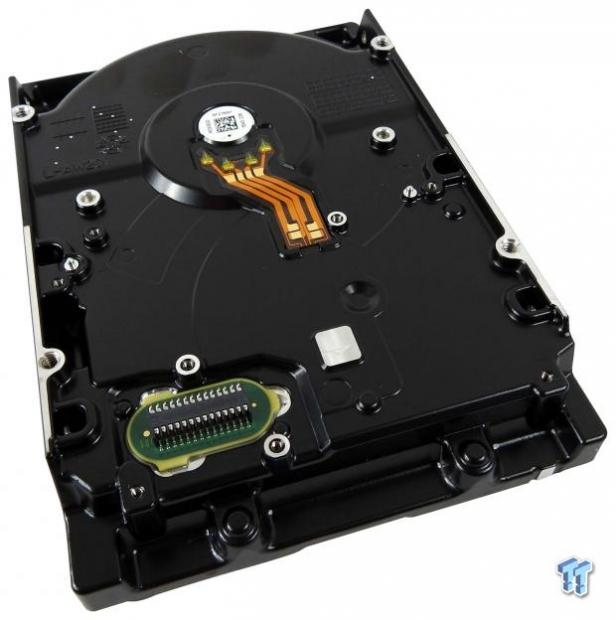 Removing the PCB, you can see a completely sealed drive. The drive head connects via an amber ribbon cable and the bottom left shows HelioSeal in action. 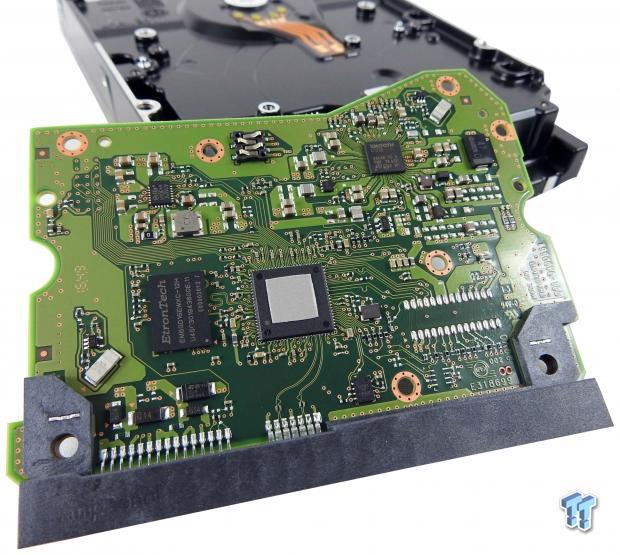 The PCB includes EtronTech DRAM cache, with a smooth motor driver and Avago drive controller in the center. 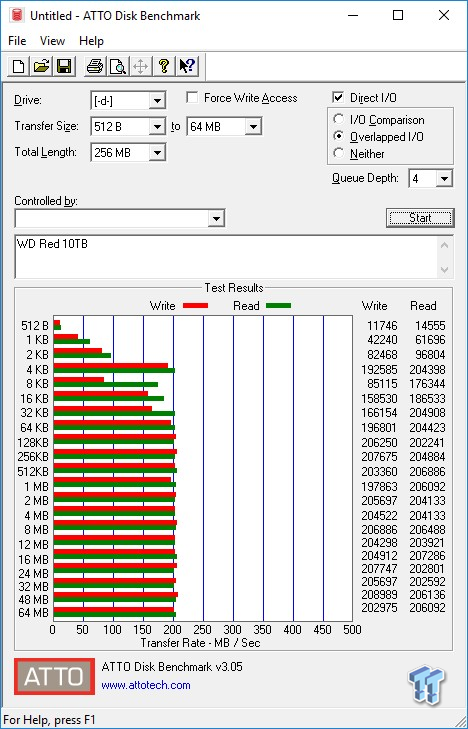 ATTO Disk Benchmark has long been a staple in testing all types of storage. For me, it's a quick test to get an idea where the drive will perform before diving into the longer testing scenarios. 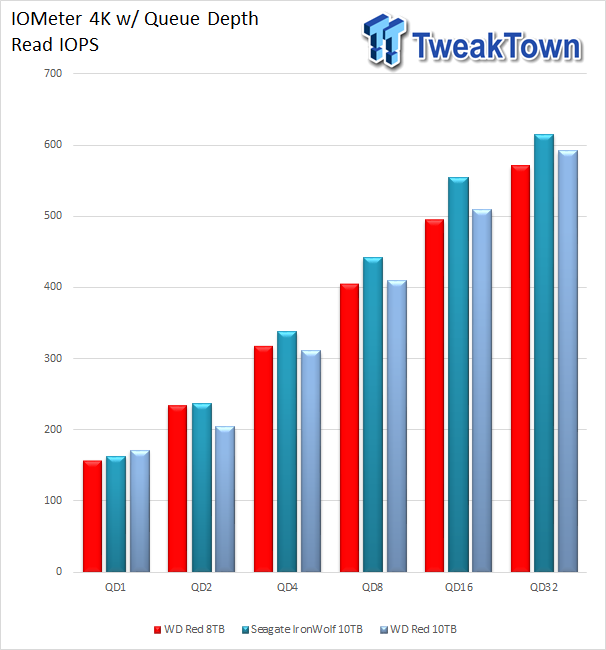 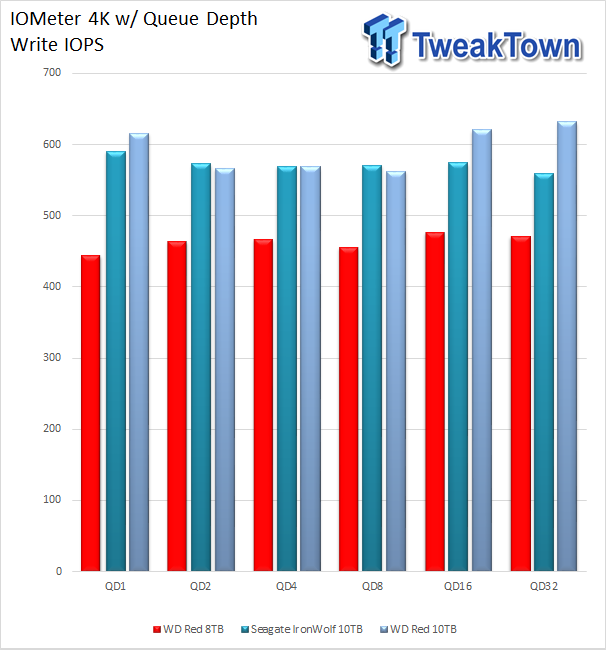 Write IOPS is a little different, performance is quite steady instead of starting out low and ending high. For this test, we see 610 IOPS QD1 then a slight drop to 570 IOPS from QD2 through QD8. The performance then jumps back up to 610-620 IOPS and finishes strong a good 50 IOPS above the IronWolf 10TB. 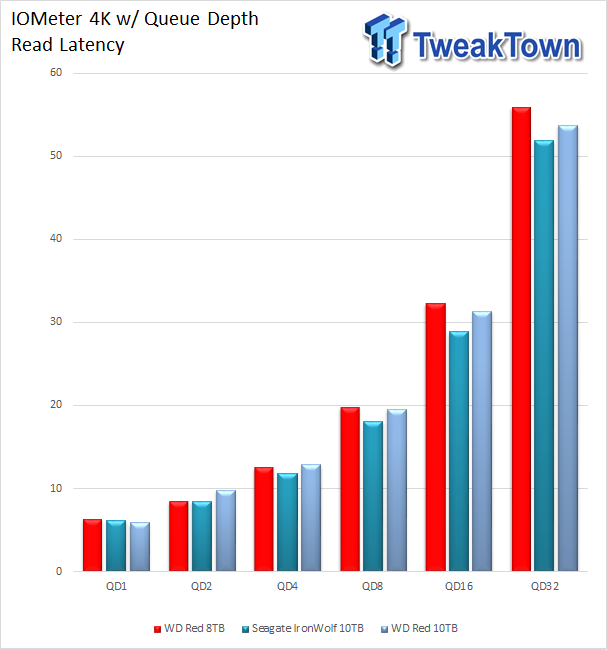 Latency tells a similar story. The 10TB Red starts out around 8ms at QD1, somewhere in the middle at QD8 we see 20ms and finishing at QD32 53ms. 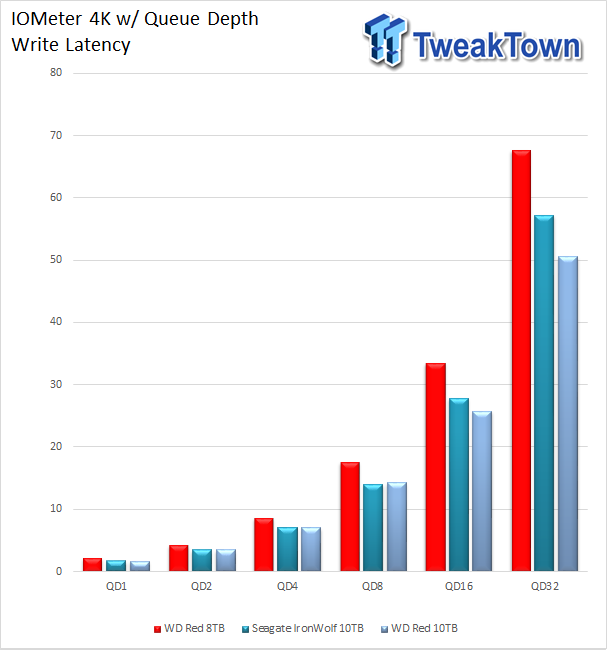 While write IOPS are very consistent, we see latency in a different light. At QD1, the 10TB Red sits at 4ms, moving up to QD8 that changes to 15ms and QD32 peaks at 50ms, 20ms quicker than the 8TB WD Red and 8ms over the IronWolf. 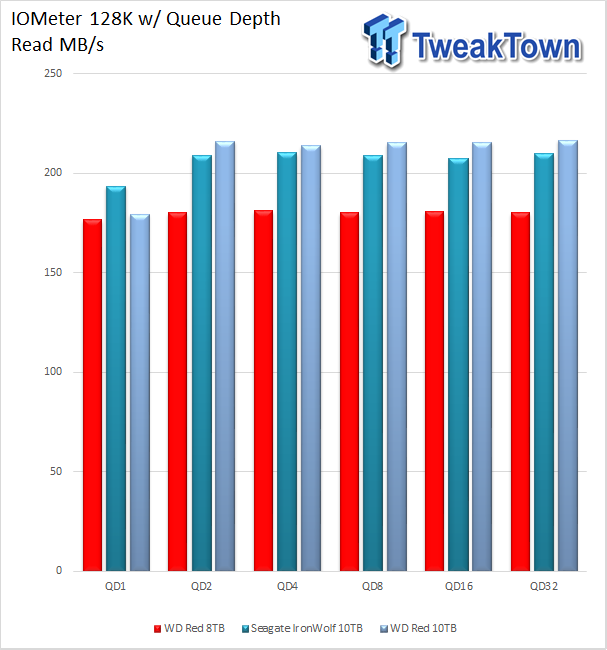 Sequential read put the WD Red 10TB right up with the IronWolf producing 210 MB/s read from QD1 through QD32. 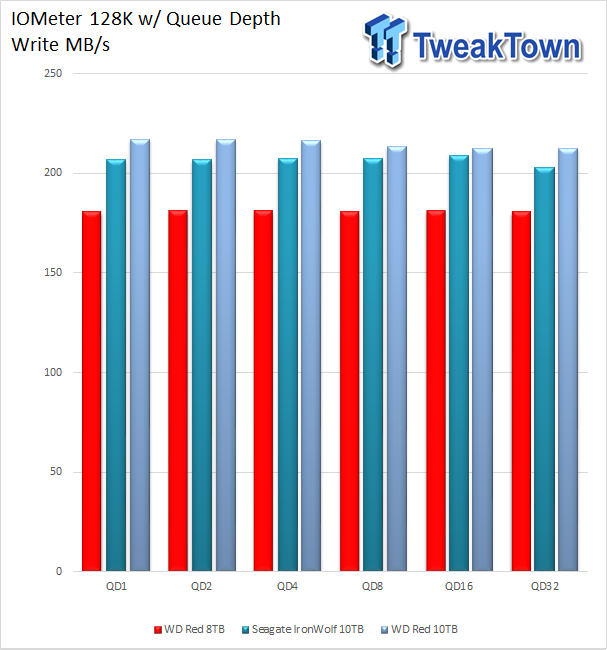 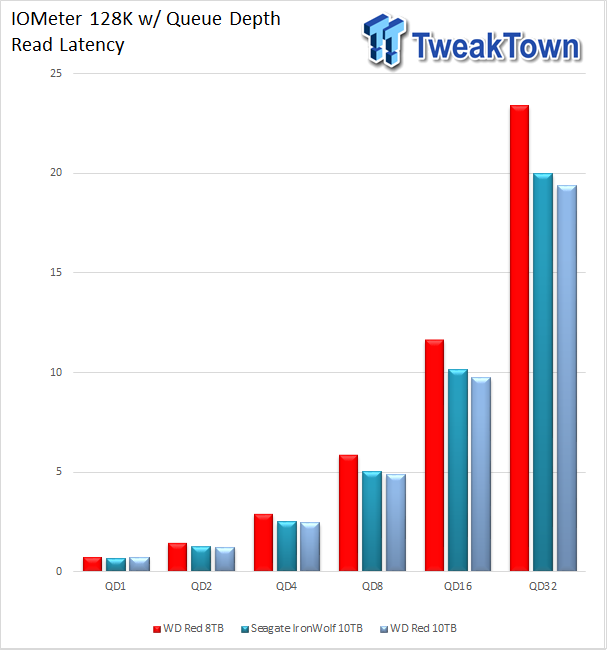 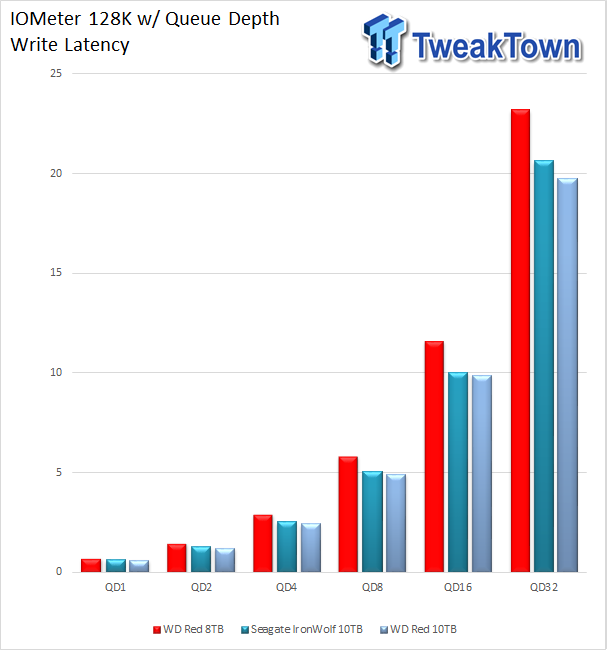 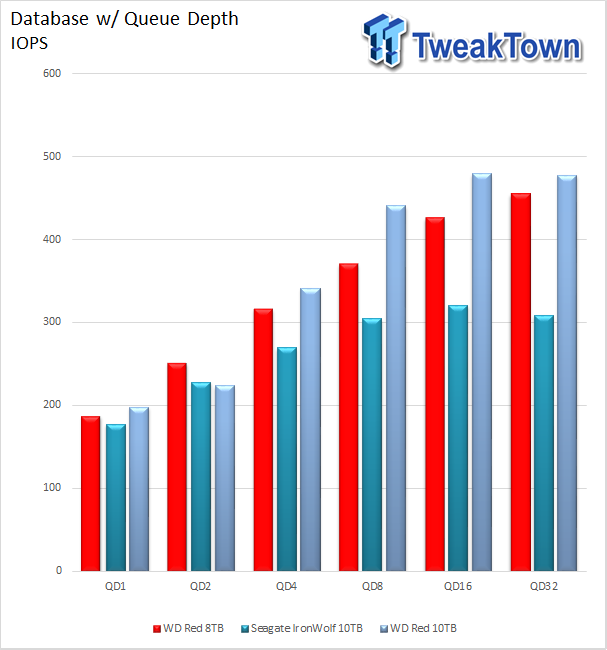 Starting the workload testing, the 10TB Red starts just under 200 IOPS. At QD8 we see that performance double to 430 IOPS, and at QD32 we finish at 490 IOPS. 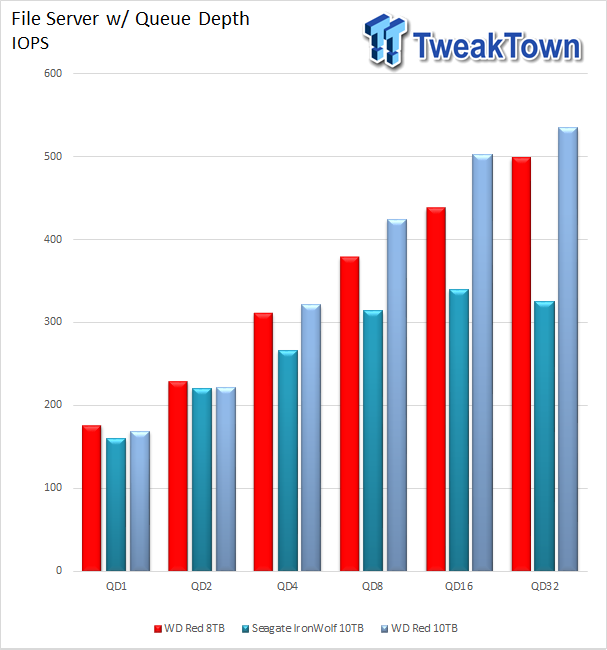 File Server started just under 200 IOPS and finished near 520 IOPS. 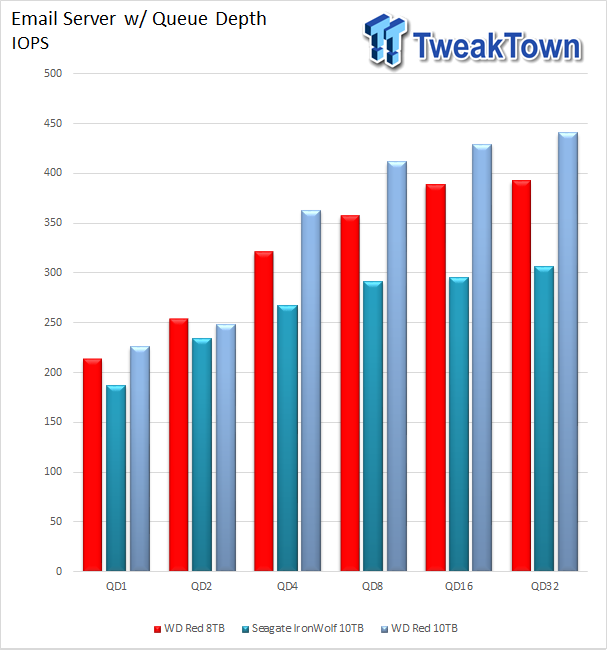 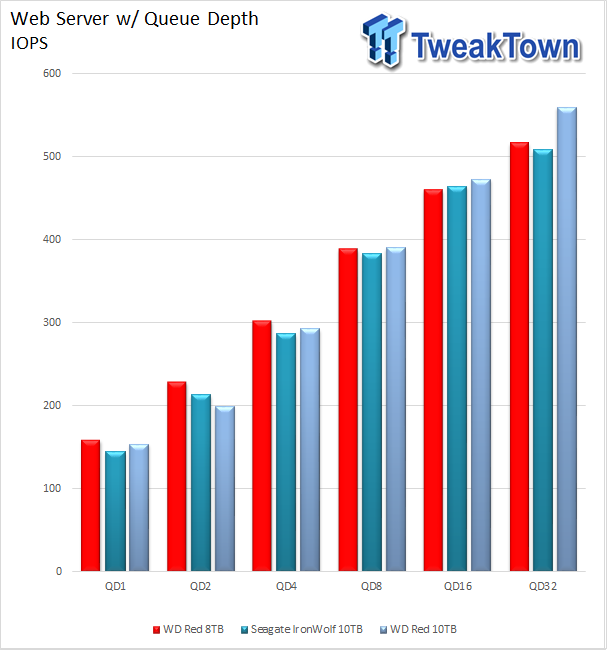 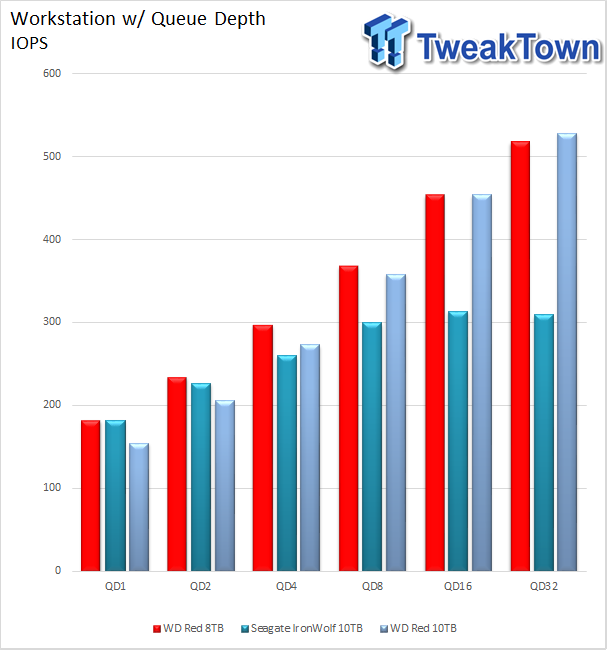 Workstation started at 175 IOPS for the 10TB Red and finished near 520 IOPS similar to the database workload.

Western Digital sent over two drives so we could test RAID performance. Obviously with two drives we are limited to RAID 0 and RAID 1. RAID 1 numbers will often be just under single drive performance due to overhead while RAID 0 is what most will use for that extra bit of performance. Let's see how the 10TB Red performs. 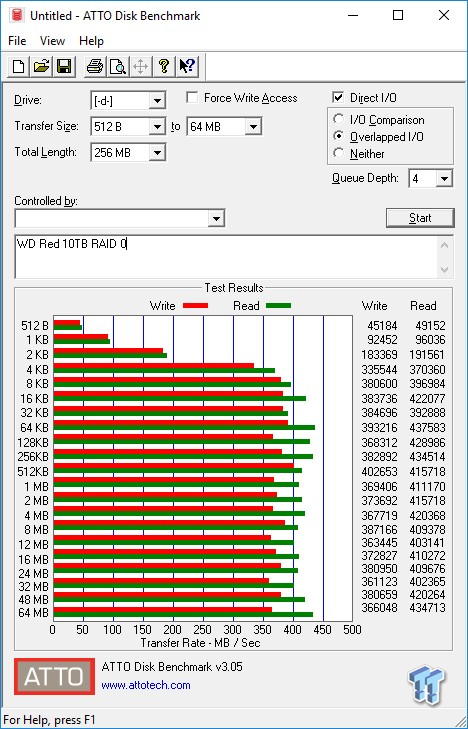 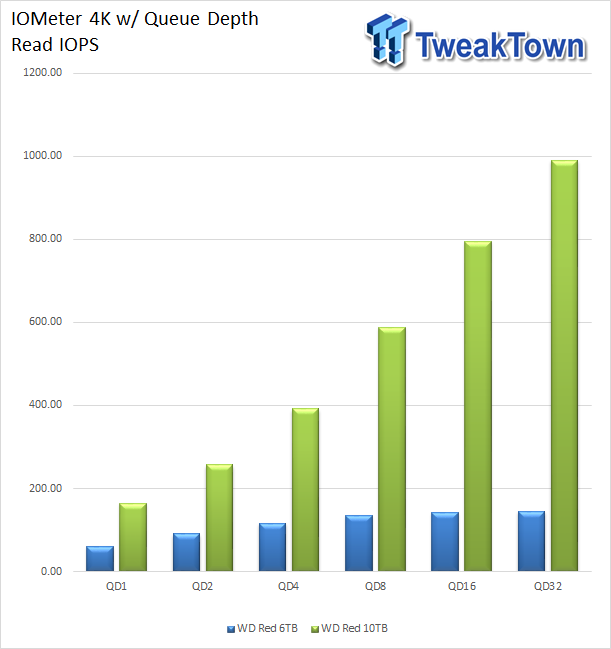 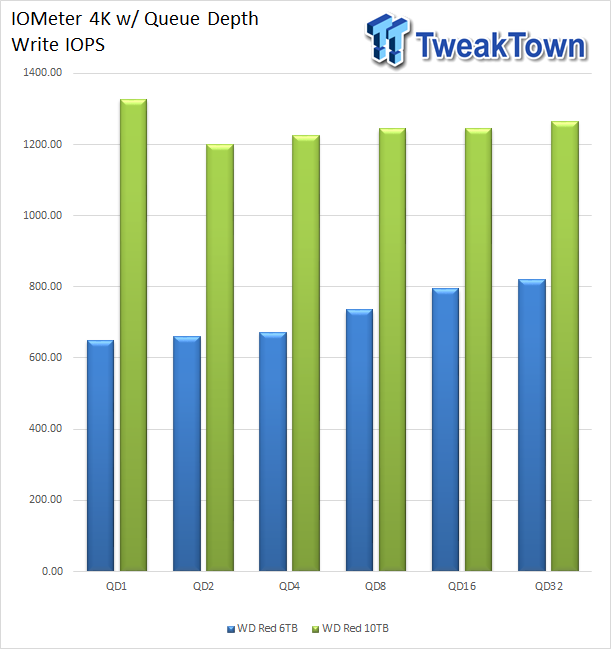 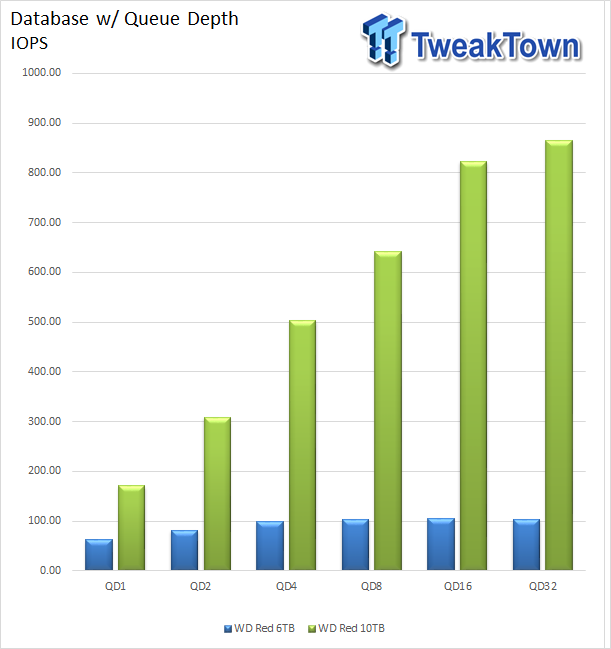 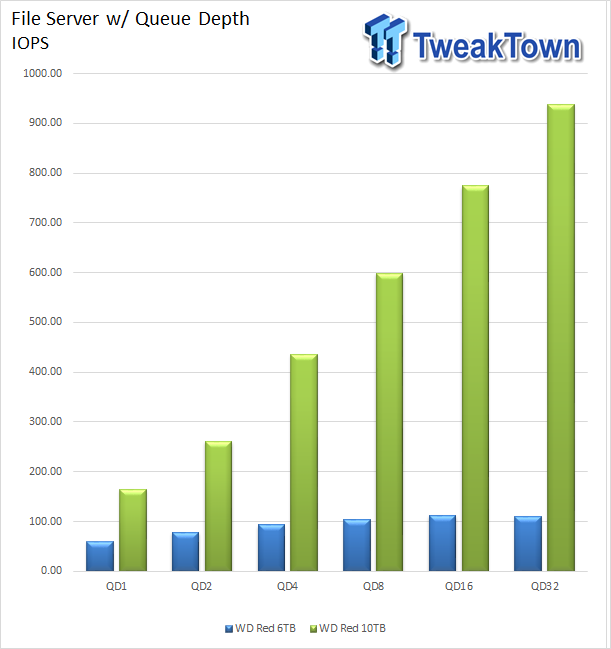 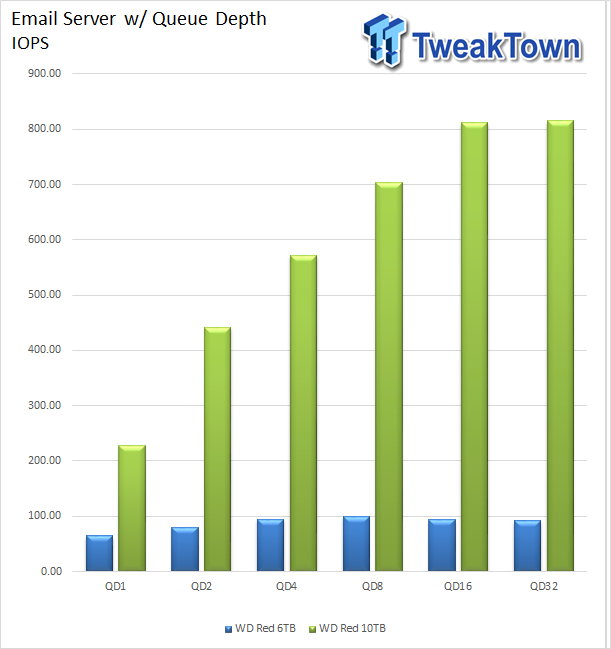 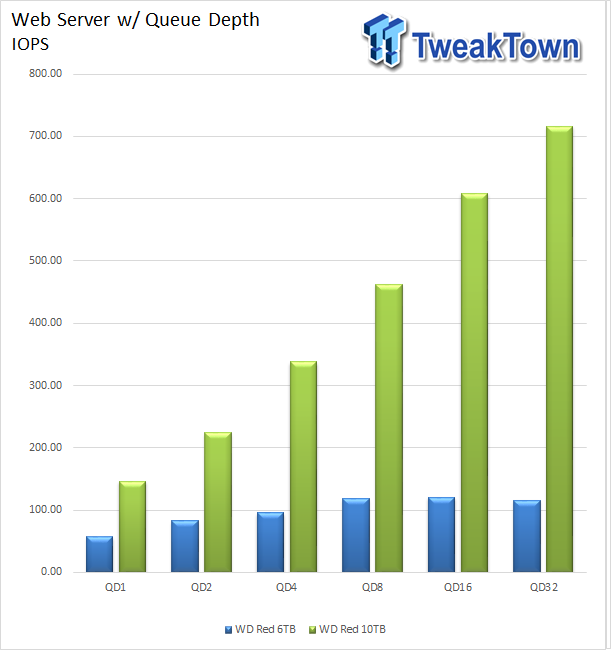 700 IOPS was the top number for Web Server. 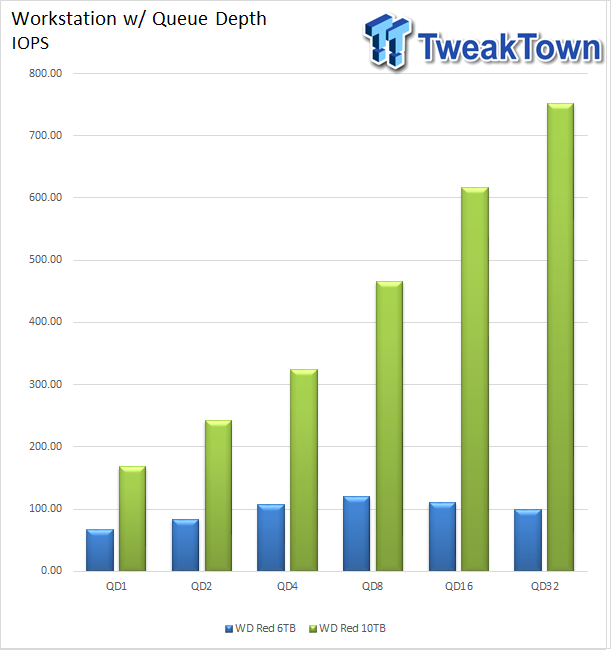 Finally, we have Workstation that started at 175 IOPs and finished at 775 IOPs. 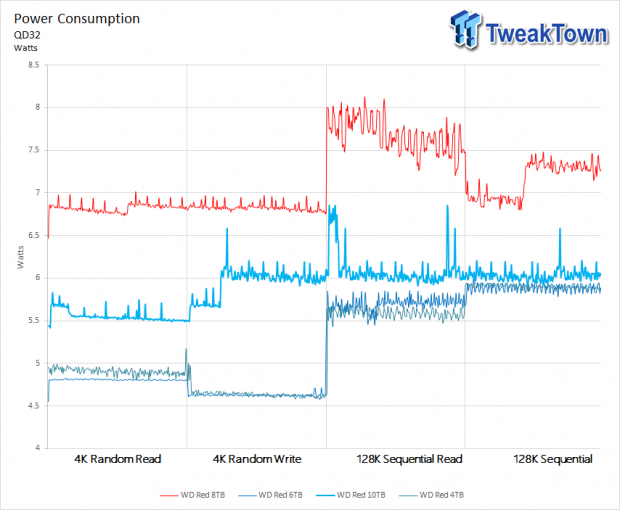 Power consumption is one of the most important metrics when it comes to data storage. The WD Red 10TB has made significant gains in this category, as noted in this review. Using a 10TB WD Red drive, you can save up to 1.5 watts over the previous 8TB solution in random workloads and up to 1.75 Watts per drive in sequential workloads. In an eight-bay device, that's 14 watts or at a 0.12 per KW/h rate, $15 a year savings by increasing the capacity of your NAS.

For those coming from 4 or 6TB solutions, power consumption will change only slightly. That means you can enjoy your increase in capacity without adding much cost regarding yearly power usage. Build quality feels the same with no issues experienced in testing or since we have been using them in our DS1515.

Performance, surprisingly, rivals that of competing 7200 RPM solutions in most scenarios. 4K read showed us nearly 600 IOPS while write went just over 600 IOPs making it the quickest of the three in our chart. With sequential performance, I found the 10TB Red reaching 220 MB/s peak, 10 MB/s quicker than the 7200RPM IronWolf from Seagate. Looking at workloads, File and Web Server are two points where this drive excelled, reaching over 500 IOPS at QD32.

For most, the capacity increase over a 4 or 6TB solution would be plenty to justify the upgrade to these new 10TB Red solutions. What you gain is much more, including higher performance, more capacity, and less power consumption. With all of that said, it's hard to deny WD the honor it deserves as the best NAS drive, dollar for dollar, on the market.

The Bottom Line: WD has the right formula with its Red lineup - high performance, high capacity, and low power consumption. The Red 10TB NAS HDD gets a tick from us.