A few weeks ago, I re-acquainted myself with the 1999 Mummy starring Brendan Fraser courtesy of Universal's spiffy new Ultra HD Blu-ray release, and while the intervening two decades haven't necessarily been kind to the once cutting-edge visual effects (doubly so in 4K), it's happily just as entertaining, tongue-in-cheek and as plain fun as it's always been.

But in light of my trip to 2017's newly rebooted film of the same name, its predecessor merely highlighted the many shortcomings of this newly reimagined version. 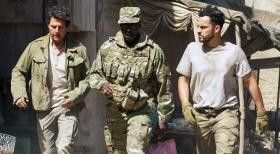 Robbed of the throne by the birth of a half-brother, Princess Ahmanet (Sofia Boutella) takes matters into her own hands and rights this perceived wrong, selling her soul to the vengeful God Set and murdering her entire family. But no crime goes unpunished, and Ahmanet soon finds sentenced to mummification for all eternity; that is, until then present-day Nick Morton (Tom Cruise) inadvertently brings her back to life, giving her the opportunity to complete her mission and bring Set to life in human form. 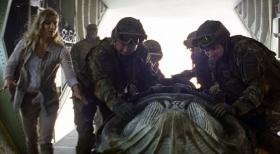 From both the perspective of a standalone film, as well as the opening salvo to what Universal is aggressively marketing as their 'Dark Universe'; a wider monster mash franchise which will ultimately include icons such as Dracula, Frankenstein and the Invisible Man, The Mummy is a complete and abject failure. In isolation, it's a boring, totally lopsided and narratively convoluted film, which comprehensively fails to engage the audience. As a would-be franchise kick-starter, it fares even worse.

Rather than allow the 'Dark Universe' to organically expand in its own time, ala the Marvel Cinematic Universe (the first, and undoubtedly the definitive standard for getting one of these things up), in their eagerness they've cast the net way too wide, stuffing it full of winks and nods to characters and events that will presumably pay off in future films. Unfortunately, their all-too-frequent nature only serves to slows the pace, bogging it down as they optimistically cram in another element that's utterly superfluous to this film in question.

Of course, the filmmakers should have focused more effort on making The Mummy first and foremost a good film, or at the very least an entertaining popcorn blockbuster. As it is, its heavily flawed, with only a few interesting action set pieces scattered amongst heavy and overly wrought exposition, bolted onto a storyline that tries exceptionally hard to avoid offending anyone with a politically correct bend, and which itself in knots.

It's also incredibly heavy handed for a summer blockbuster. For example, in the first five minutes alone, you get pummeled by flashbacks to English Crusader Knights, the dispatch of nearly an entire genealogy in Ancient Egypt and then a present-day attack by (presumably) ISIS insurgents and a bombing courtesy of the coalition of the willing. Jeez... all I wanted was a little fun. 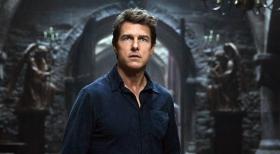 While the film has managed to snag a very capable cast, it then proceeds to thoroughly waste them with unmemorable characters and shockingly bad dialogue. A curious casting decision from the get-go, the normally reliable Tom Cruise seems woefully miscast as the charmless Indiana Jones-type, while Anabelle Wallis gets precious little to do as his sometime rival and love interest. Despite taking the title role, Sofia Boutella's role amounts to quite a minor part in the whole feature, doing quite little other than cause very bad, and infrequently destructive events to occur.

Seriously, the character's role is so half-baked that it comes up quite poorly in comparison to Arnold Vosloo's freshly shaven scalp from the 1999 version. Russell Crowe inhibits the Nick Fury-like role of Dr. Henry Jekyll which will (might?) serve as the anchor of the Dark Universe films, but who's cameo is quite desperately shoe-horned into the already bloated narrative. 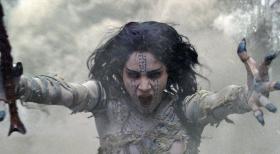 Director Alex Kurtman; until now best known as one-half of the writing duo who gave us the Star Trek reboot and the despicably awful Transformers sequel Revenge of the Fallen, steps behind the camera for the first time and suffice to say I think many of the film's inadequacies can be pinpointed to his lack of experience. I'm loathed to introduce gossip and innuendo in a theatrical review, but the on-set reports that Cruise step in during production to complete the film following concerns about Kurtzman's competency are entirely believable.

I never thought I'd yearn for the return of Brendan Fraser, but there it is. This Mummy should be buried for all eternity. Avoid at all costs. 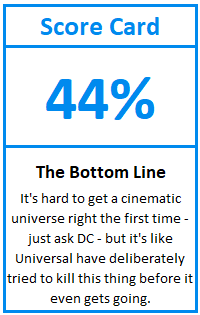