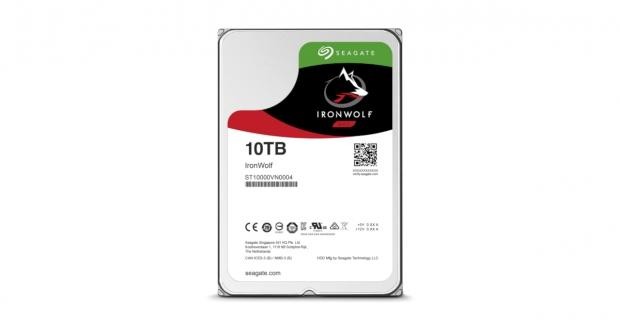 When Seagate launched the Barracuda Pro in late July, they also launched and rebranded their entire lineup of HDD solutions. The Surveillance drive became the Skyhawk, SSHD is now FireCuda, and the NAS HDD is now called IronWolf.

With the rebranding comes a new 10TB Helium solution for both the SkyHawk and IronWolf lineups, and with the latter in house today, we are going to run it through some testing. The IronWolf takes advantage of a number of technologies that increase reliability in multiple drive arrays including AgileArray, a multi-part system that includes the likes of AccuTrack that gives tolerance for vibration in multi-bay environments along with rotational vibration sensors and dual-plane balancing. 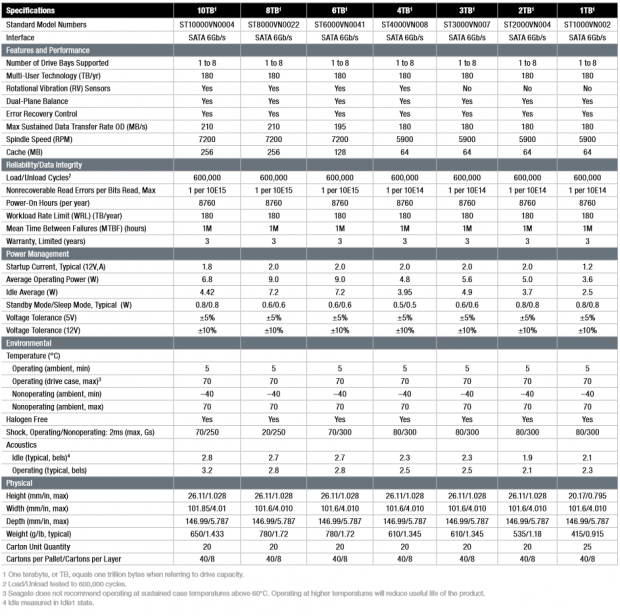 Taking a closer look at the specification sheet above, the IronWolf uses the VN identifier whereas the Barracuda Pro used DM as its identifier. The interface is SATA 6Gb/s, and this solution is ready for one to eight bay systems and 180TB/Yr. Sustained performance is said to be around 210 MB/s with a 7200RPM spindle speed and 256MB cache. 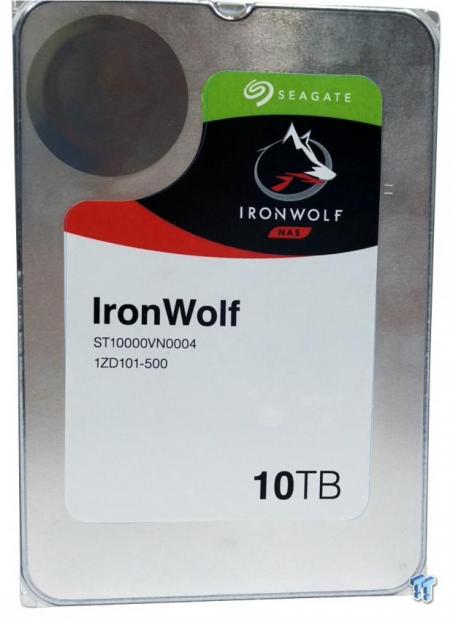 The IronWolf sample I received had very little information on the sticker. We have branding at the top and capacity at the bottom

Drive connectivity sticks to the standard power on the left data on the right. 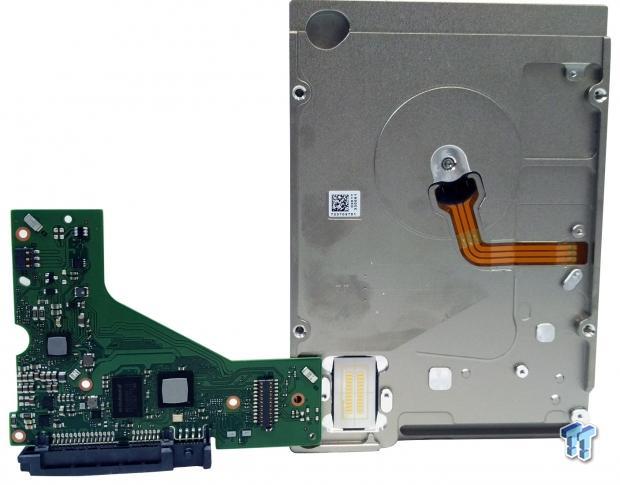 Pulling off the PCB, we have an Avago branded controller in the center with a Smooth motor at the top. 256MB of cache comes from Winbond. 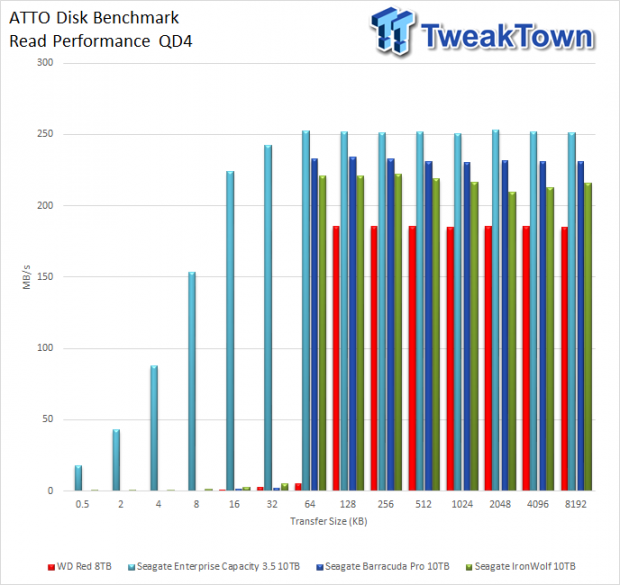 We start off testing, just as we did with the Barracuda Pro. ATTO is a standard for performance testing and in read the IronWolf was a touch under the 'Cuda Pro, hovering at 220 MB/s from 64 to 8M transfer sizes. 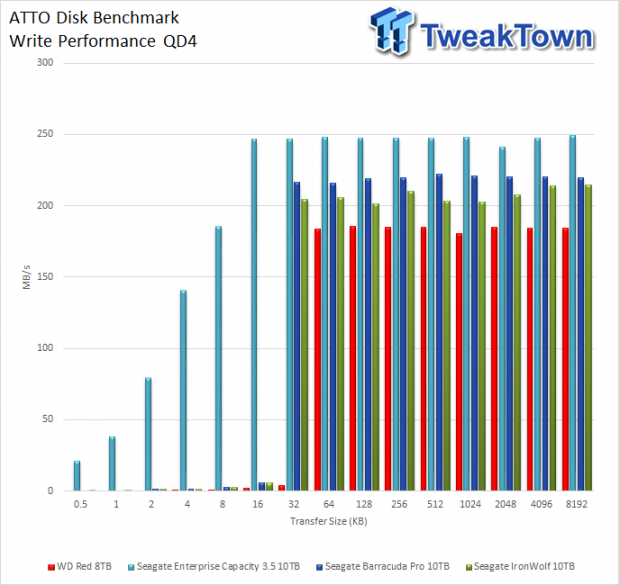 Write performance started around 64kb transfer size with a hair over 200 MB/s and it finished up at a touch over 220 MB/s. 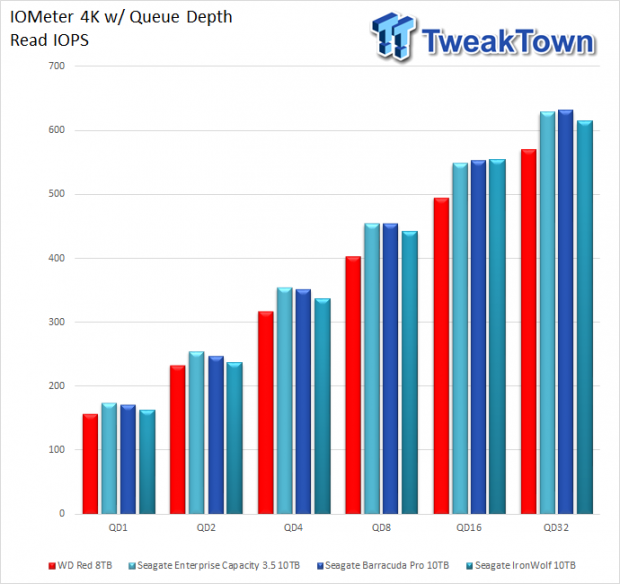 Read IOPS start all four of our drives under test around 160. As we move higher into QD, the drives start to separate, where the IronWolf becomes the quickest drive at QD16. 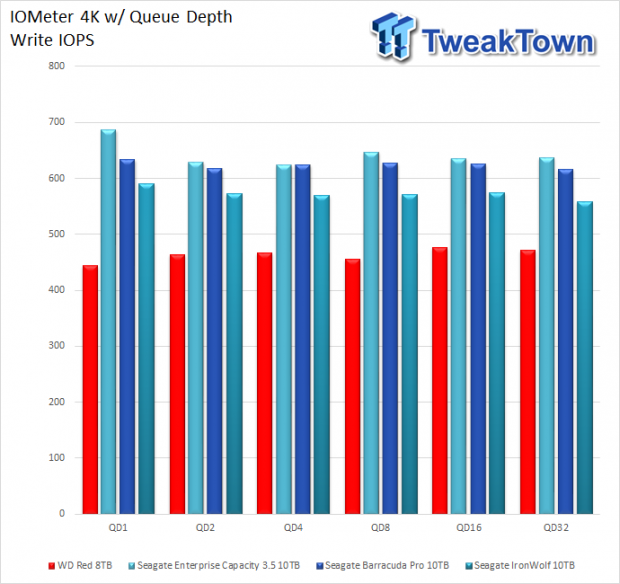 Write IOPS were off to a quick start with the IronWolf pulling in a hair under 600 IOPS at QD1 and 575 IOPS at QD32. 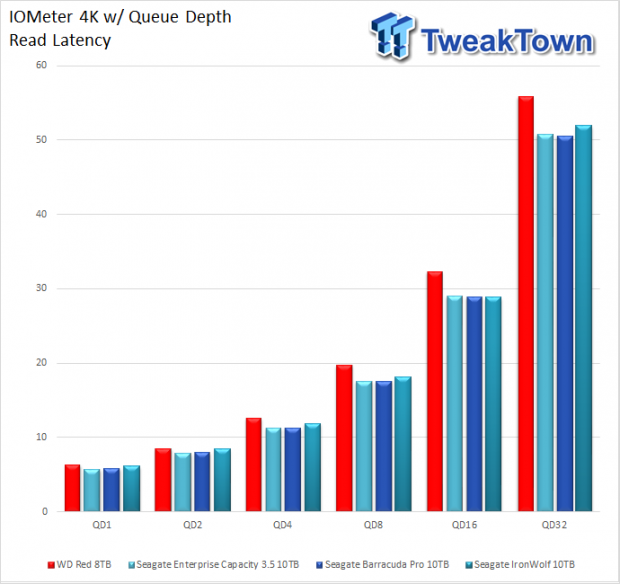 The latency results had the IronWolf show a consistent step with the Enterprise Capacity and 'Cuda Pro. 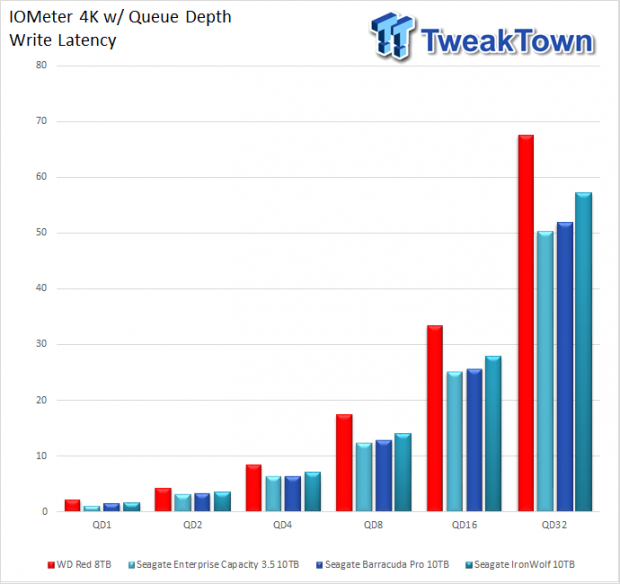 Write latency too was consistent from a few ms at QD1 to 57ms at QD32. 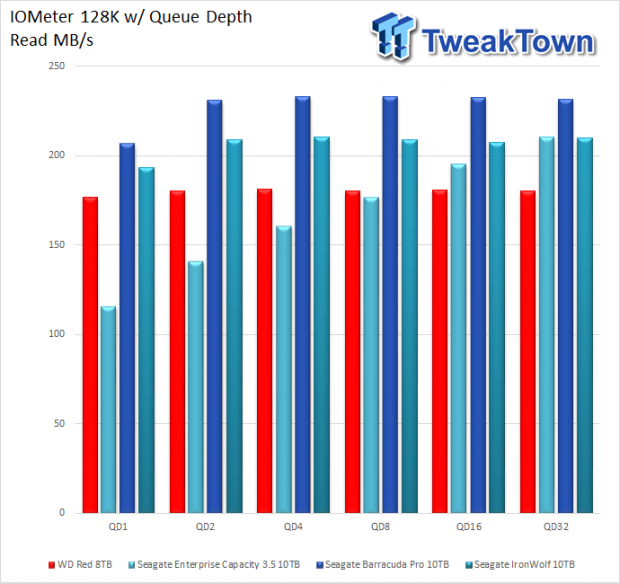 Sequential performance for the IronWolf started out at 190 MB/s at QD1 and ramped to a peak of 225 MB/s at QD32. 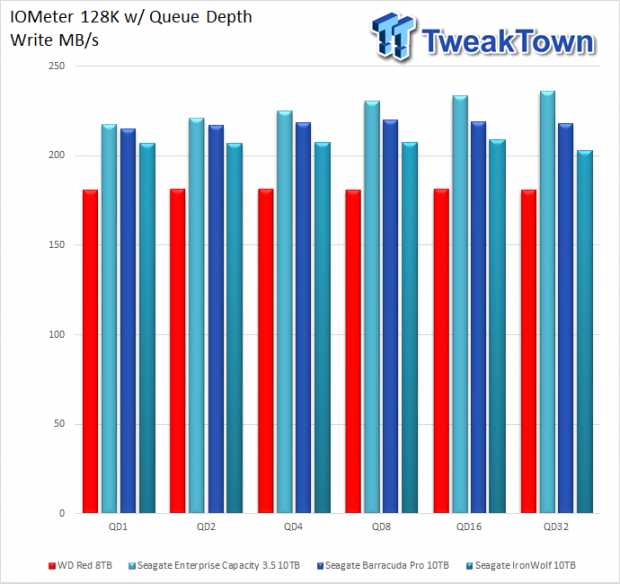 As for write performance, QD1 showed solid performance at 210 MB/s, while moving through to QD32 the IronWolf produced 200 MB/s. 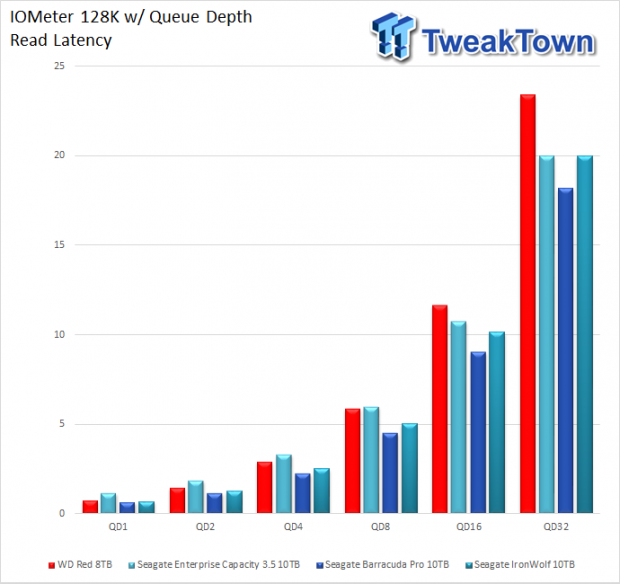 Read latency put the IronWolf a touch below the Enterprise Capacity. 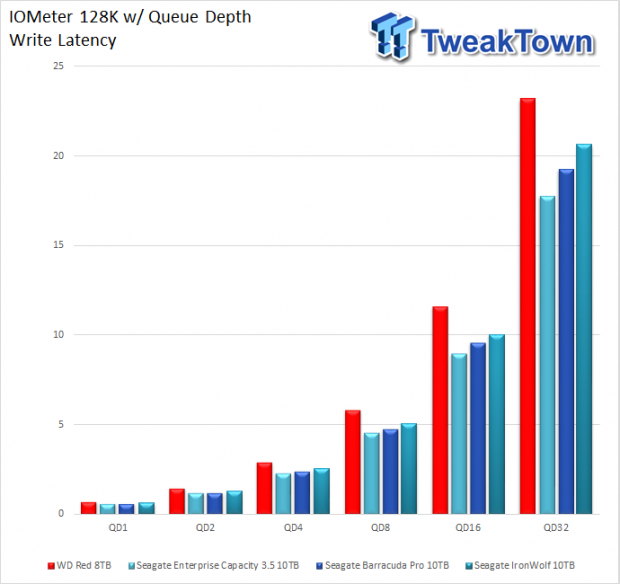 Write latency was the highest of the three Seagate solutions. 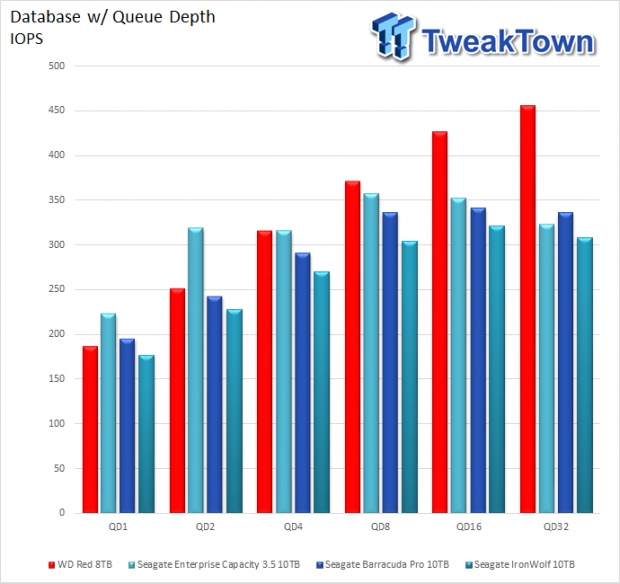 Database started off with nearly 175 IOPS at QD1 and finished at QD32 with 300 IOPS. 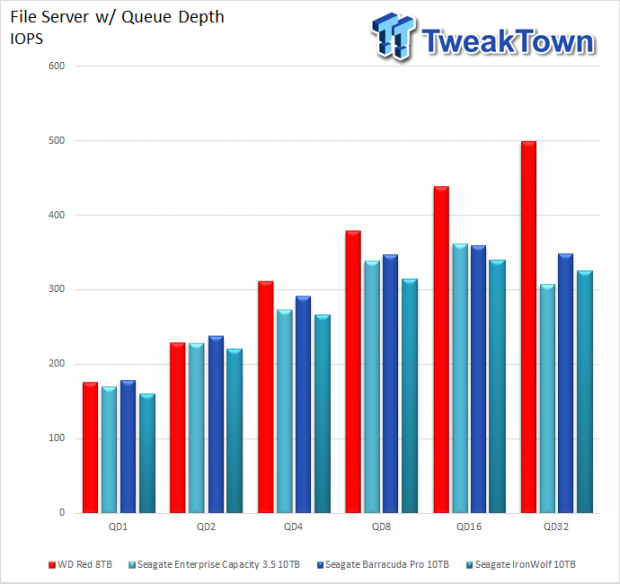 File Server showed similar performance at QD1 with all drives, while at QD32, the IronWolf was a touch above the EnCap at 330 IOPS. 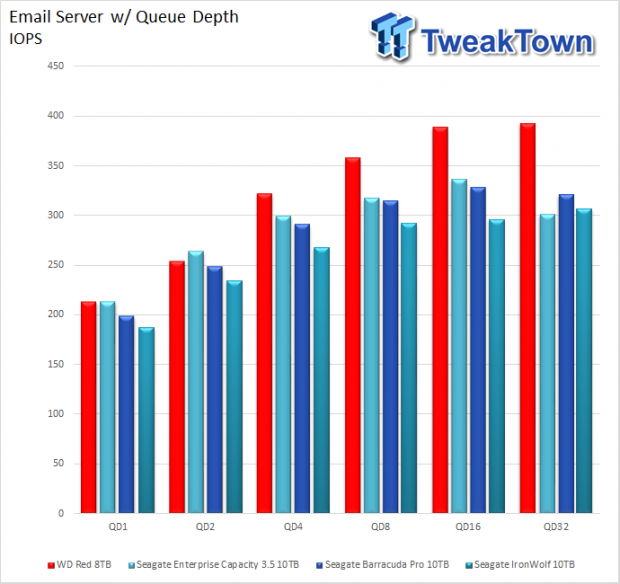 Email Server proved to be one of harder workloads for the IronWolf, starting out at 190 IOPS at QD1 and ending with 300 IOPS at QD32. 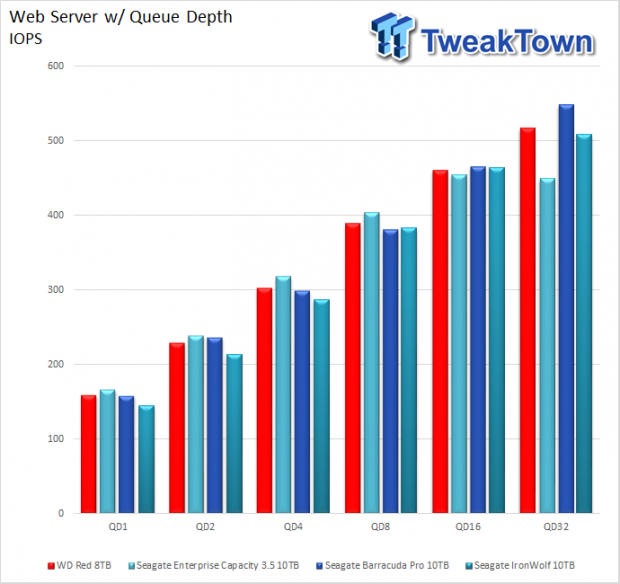 Web Server had all the drives up and running again starting near 150 IOPS and ending at 500 IOPS; the IronWolf did quite well in this workload. 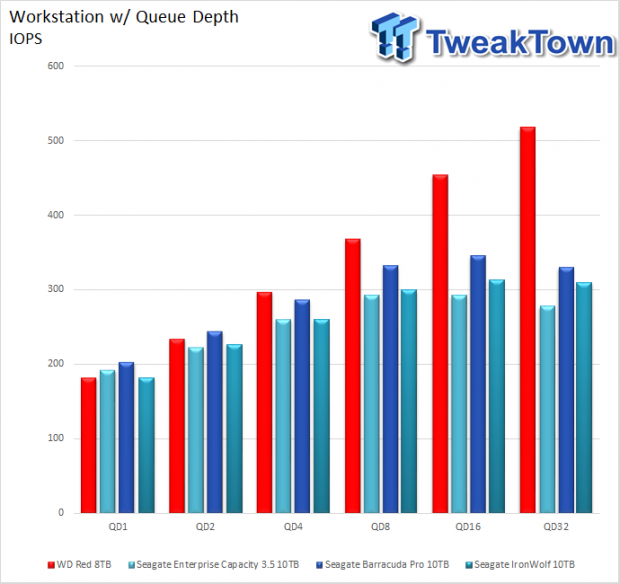 Workstation peaked just over 300 IOPS for the IronWolf. 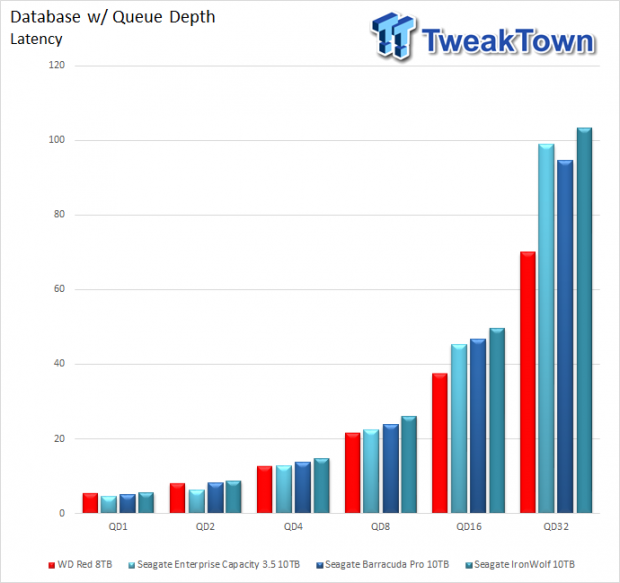 Diving into the response times of Workloads testing, Database reached a peak of 110ms at QD32. 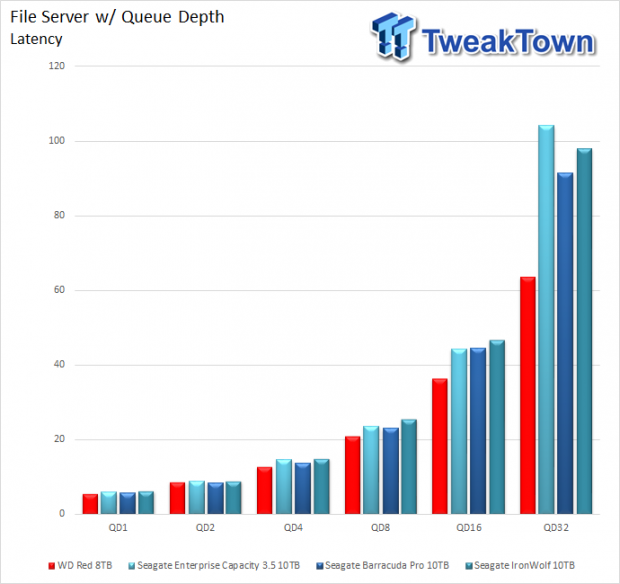 File Server touched a high of 90ms after starting out around 8ms at QD1. 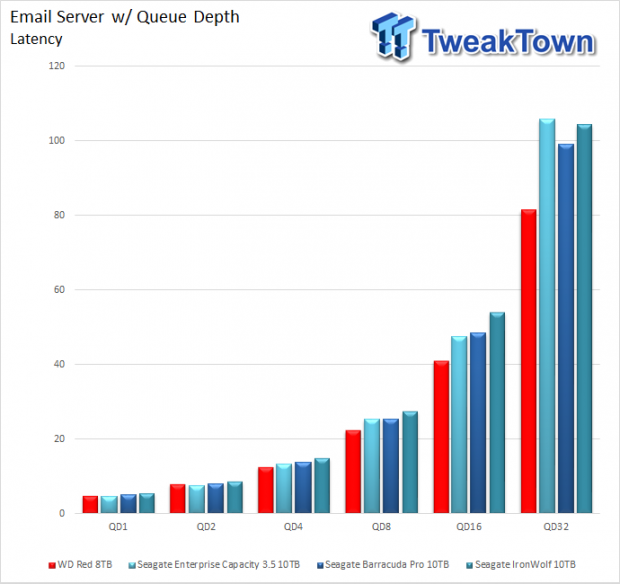 Email Server for the IronWolf hit 105ms at QD32, slightly lower than the EnCap 10TB. 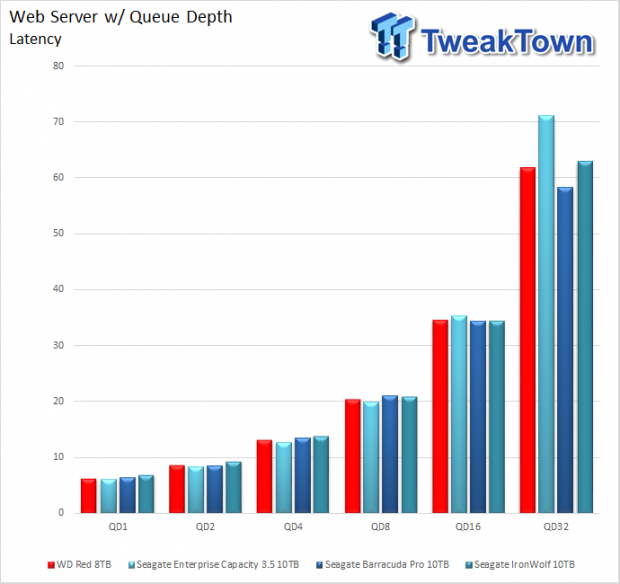 Web Server, being one of the best workloads for the Seagate solutions, the IronWolf had a low 8ms starting point and reached 63ms at its peak. 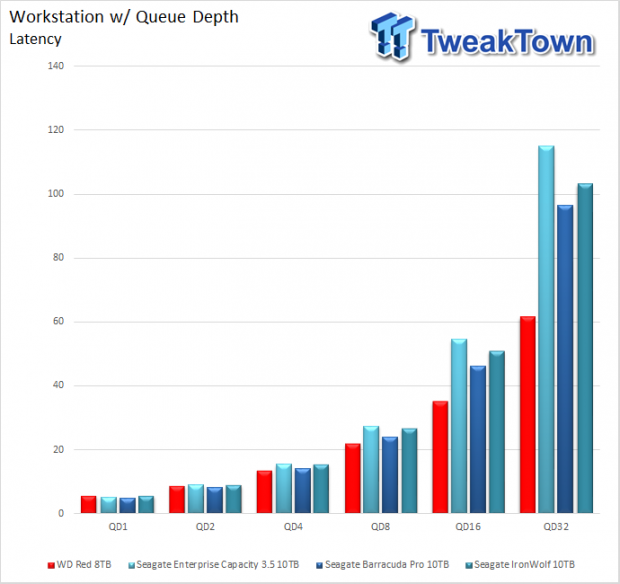 Workstation ended at 103ms at QD32 about 95ms higher than where it started at 8ms QD1. 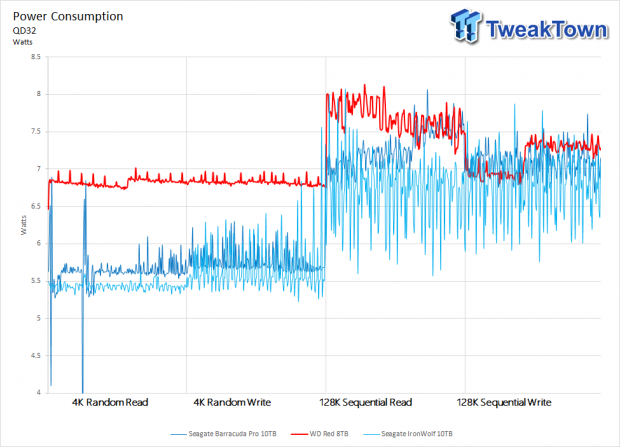 With the launch of the 10TB helium based solution, Seagate has ramped up their performance per watt.

The IronWolf falls perfectly into line with this as it uses slightly less power in random read and write (around 5.5 watts) while moving to sequential workloads power switches between 6.5 and 7 watts.

The IronWolf in its 10TB configuration brings a solid jump in capacity over previous 8TB NAS solutions. For those running multiple bay configurations, this means an extra 4TB for two bay users and 8TB for four bay users. A high-level of build quality is certainly present with this solution; I actually had four drives in house during testing, and I found solid consistency and no drive failures - and that was after a lot of end to end testing.

The performance wasn't quite as high as the Barracuda Pro, but it was certainly admirable, especially in sequential and random workloads. Peak performance for sequential came in at 220 MB/s read and 200 MB/s write while IOPS topped at 610 read and 550 write. In enterprise workloads, the IronWolf was right with the 'Cuda, hitting 300 IOPs in Database and Email Server, while File Server topped 350 IOPs, and Web Server was by far the best at 500 IOPS.

Overall, the capacity increase alone is going to be enough for most to jump on this solution, but for those that need a bit more encouragement, Seagate is offering a solid amount of technology in this solution with AgileArray, and its 180TB per year rating is one of the highest on the market.

The Bottom Line: Seagate's IronWolf 10TB hard drive packs all the features and performance needed to make for a reliable NAS drive for the average consumer.