It's astonishing that it's taken 25 years to mount a follow-up to such a well-regarded series, but the path to a third Ghostbusters has been anything but straightforward. For years planned as a return of the original crew of Dan Aykroyd, Bill Murray, Ernie Hudson and Harold Ramis, the mooted Ghostbusters 3 ultimately never got traction, with responsibility falling to video games, merchandising and animated cartoons to keep the franchise heart pumping. But following the 2014 announcement that the series would be rebooted by an all-female cast headlined by actress Melissa McCarthy, the production became a flashpoint for controversy, with legitimate criticisms twisted into nasty accusations of sexism and misogyny, given the seal of officiality by director Paul Feig.

But finally the completed film is here, and everyone can judge whether Ghostbusters circa 2016 is a woeful exercise in name recognition film-making or a worthy continuation of the classic series. Let's jump in. 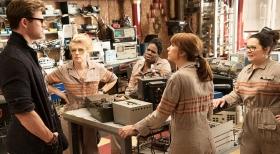 When scientist turned teacher Erin Gilbert (Kristen Wiig) is blackmailed by former colleague Abby Yates (Melissa McCarthy) and her new protégé Jillian Holtzmann (Kate McKinnon) to lend a hand to an unfolding paranormal investigation, the trio become hot property after joining with street smart Patty Tolan (Leslie Jones) and dopey receptionist Kevin (Chris Hemsworth) in marketing their skills as 'the Ghostbusters'. But they get more than they bargain for when a deranged occultist (Neil Casey) opens a portal which beckons ghosts and ghouls to lay waste to New York City. 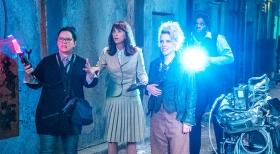 I'll be entirely frank. I couldn't give a damn if the cast of a film is male, female, black, white, purple, red or green. But I do care that if a studio is billing a film as a comedy, then it better be funny. And if it's following up on one of the most beloved sci-fi comedies of all time, then it better be good. Sadly, Ghostbusters fails on both fronts. Worse, the feminist and equal rights crowd who latched onto the film as a vehicle to spread their gospel have been dealt a bitter blow. In tying their message to such a flawed concept, their campaigns have woefully backfired. 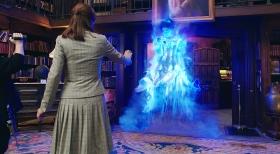 Comedian Melissa McCarthy is a coarse, divisive actress, with comic sensibilities that can only be described as juvenile at best and appalling at worst. Within minutes of her entering Ghostbusters, two unfunny fart jokes are delivered in quick succession and any hope that she might display some comedic progression is quickly dissipated. Co-stars Kristen Wiig and Kate McKinnon at least expand the opportunity for the leads to improvise and riff off each other, but they fail to create better jokes. While McKinnon has been praised by others as the film's strongest performer with what can only be described as an offbeat and bizarre performance, I'd actually say the standout cast member (if one can call it that) is Leslie Jones - at least she was responsible for a few chuckles.

Having found success with ensemble comedy casts in Bridesmaids and Spy, director Paul Feig seemed a reasonable choice as any to finally bring a new Ghostbusters to the screen but falls woefully short of the mark. While much has been made of the cast's ability to improvise scenes on the go, the final cut resembles less a cohesive film and more a poorly strung together assemblage of scenes that waiver constantly in tone, pacing, and quality. While the film does admittedly improve as it goes on, it also moves from a straight out comedy to more of an action film, and in doing so lurches away from the notion of what a Ghostbusters film should actually be. 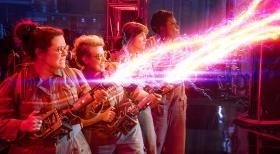 I've no problem at all with studios churning out sequels, spin-offs, and reboots. No franchise is untouchable and good ideas deserve to live on in the public consciousness. But I do have a problem when their motivation is less creative and more financial. In Ghostbusters, have created a cynical and poorly made film which attempts to cash in on the previous films, yet does so without respect and ignores their legacy. Sony Pictures, here's two tips from me to you: Don't go to war with your fanbase - it's just dumb. And if you're going to launch a new film after 25 years, at least have the decency to prepare a good script and assemble a good cast. 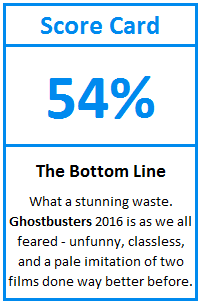