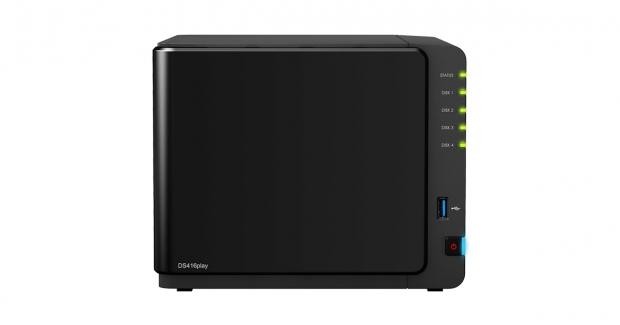 Nearly two years ago, we got our hands-on the DS415play, an Intel Evansport platform that was built from the ground up as a media serving and data storage solution. The DS416play is the follow-up to that device and it based on new silicon from the Intel Braswell refresh, launched in January.

With the play moniker sitting firmly behind this new solution, we can reasonably expect the DS416play will be a solid media transcoding and serving device, along with its standard duties as a file server. The move to the DS416play and its extra horsepower allows for this solution to play and transcode single stream 4K video or up to three Full HD videos simultaneously. With this unit, a 400 series platform, it does carry four 3.5" bays with tool-less installation and is backed by the latest DSM OS, version 6.0.1. 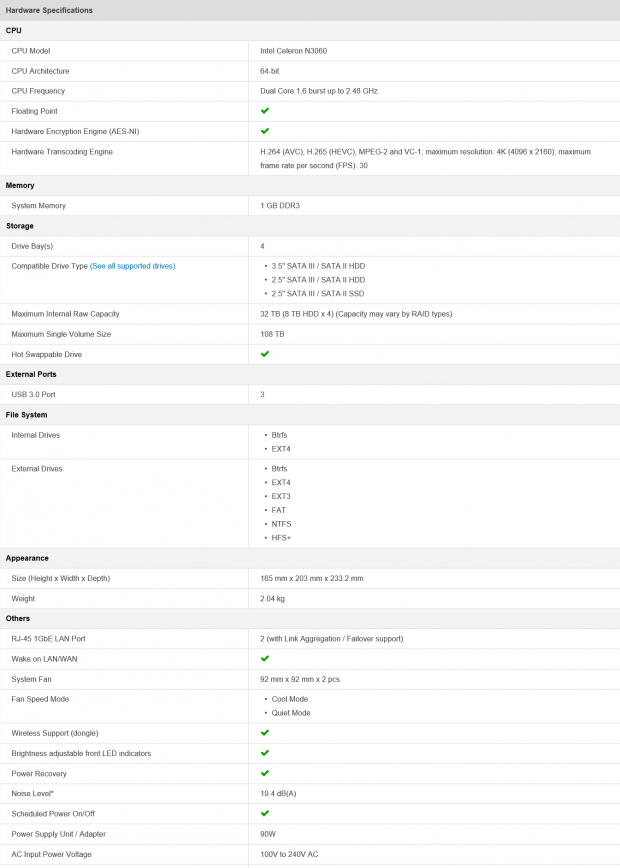 Going over the hardware specifications of the DS416play, we have a Braswell platform as mentioned above, this time, the Intel Celeron N3060. This processor is a 64-bit capable chip operating at 1.6GHz with a burst frequency of 2.48GHz paired with 1GB of DDR3 memory.

Four bays complement this solution with both 2.5" and 3.5" support in the HDD and SSD type. Single volume support goes all the way up to 108TB while external storage is supported on all three USB 3.0 ports. With this being a DSM 6.0+ platform, we have support for BTRFS and EXT4 internally with NTFS, FAT, and HFS+ added for external solutions. Dual Gigabit LAN rounds out the rear I/O with WOL support and cooling this entire unit is dual 92mm fans. 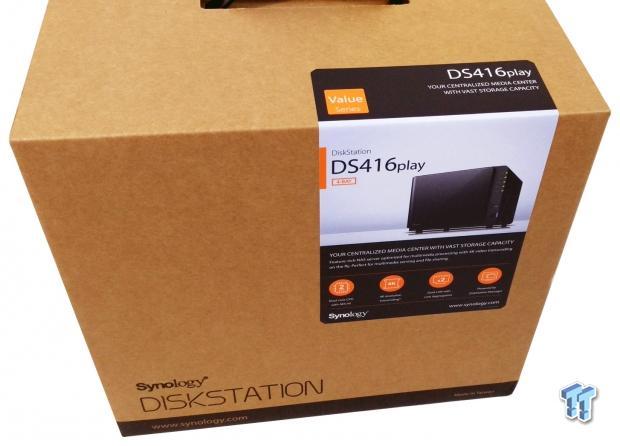 Starting with packaging as I tend to do, the DS416play has a no frills approach with its plain brown box and sticker above. The sticker includes all the information about the NAS including bay count, LAN ports, and features. 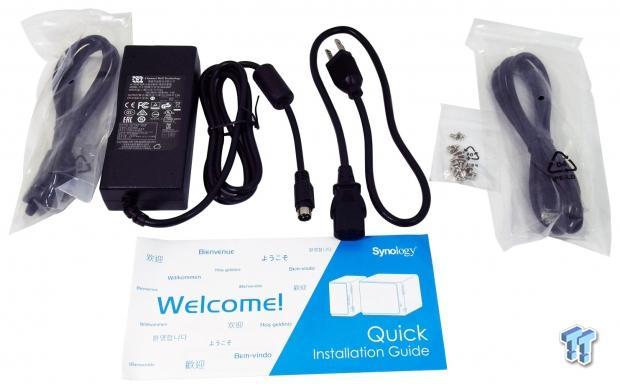 The scope of delivery of this solution includes the power adapter, Ethernet cable, and set of screws for securing your drives. 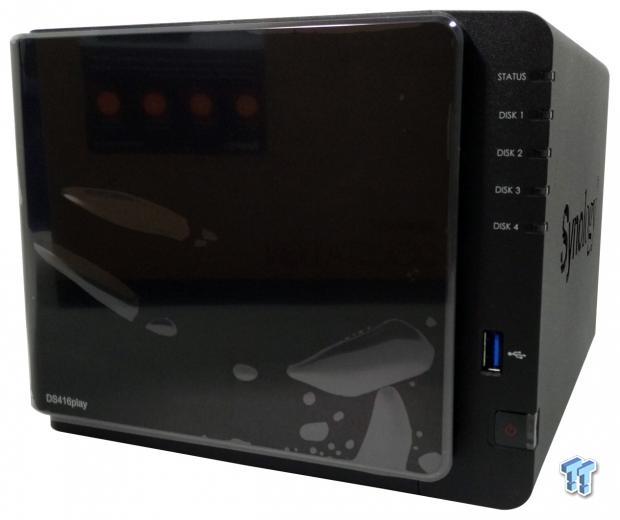 The front of the NAS has that glossy bay cover we have all come to love while the right side houses all the LEDs, power button, and USB 3.0 port 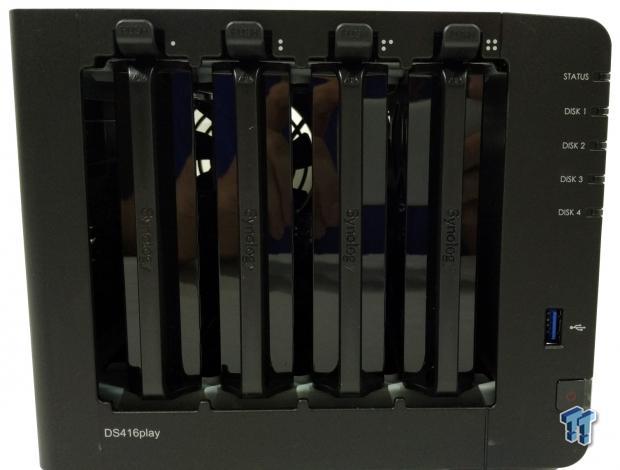 Upon removing the bay cover, each tray is unlatched at the top and then slides out. Bays are numbered by dots above the trays. 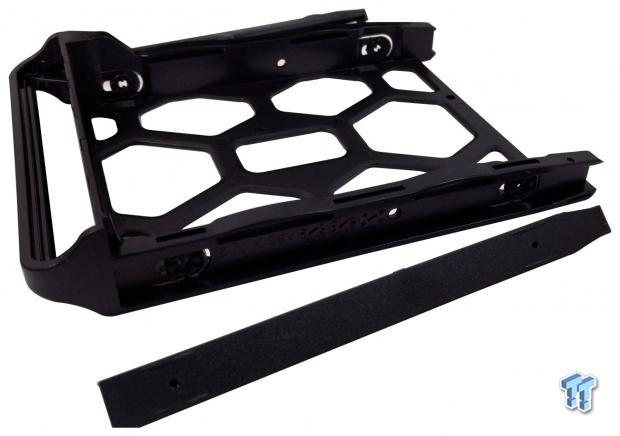 The trays are the tool-less type with plastic bars that snap in and lock your drives with pins. 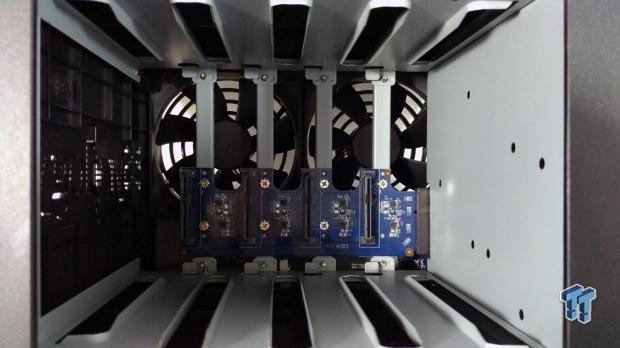 The backplane has slots that are ready for SAS drives, although we haven't tested the functionality to know if they are fully supported. 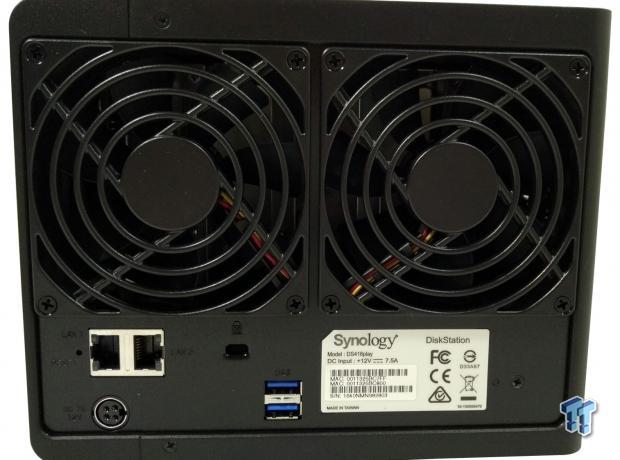 The rear of the unit carries a rather simple I/O. This includes dual gigabit LAN at the top left while USB 3.0 is placed on the right and power next to it. 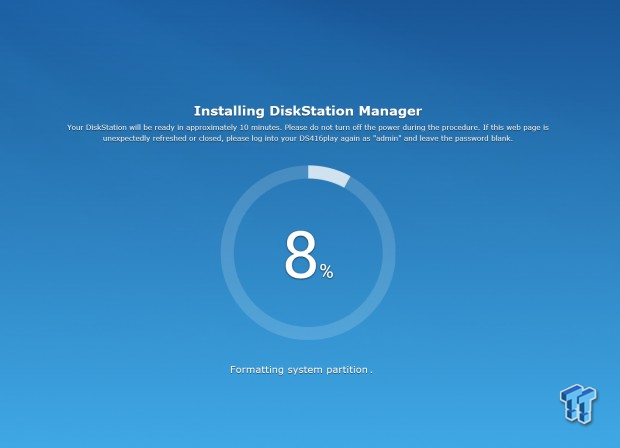 Setup of DSM can be two ways; you can have the NAS download the latest install file, or you can do it manually. I normally just let the NAS do it, which tends to be about a 15-minute process. 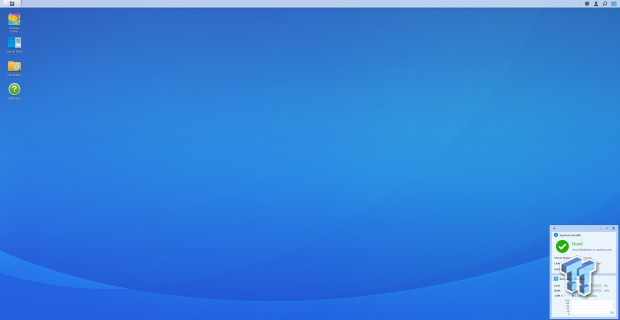 After setup is complete, you will see the DSM desktop. This desktop is fully customizable but starts with a widget at the bottom right that shows system health and the resource monitor. 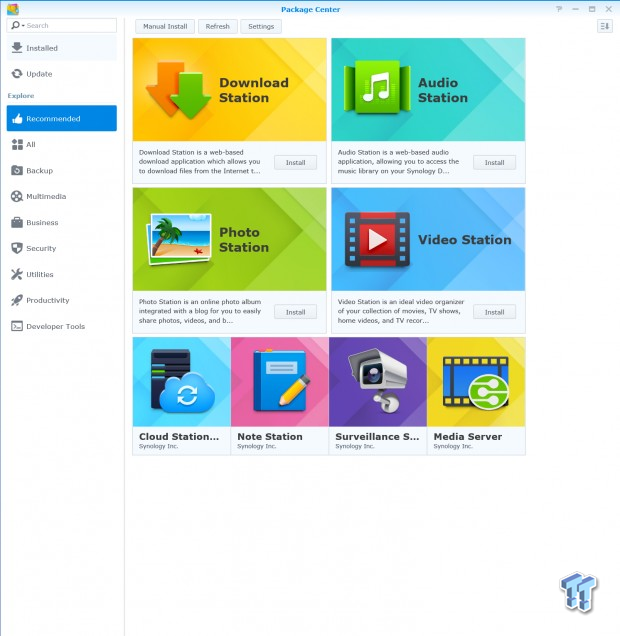 Above, we have just a few of the apps that can be installed with DSM. Of course, there is a rather large third-party portfolio as well including some popular solutions like Plex. 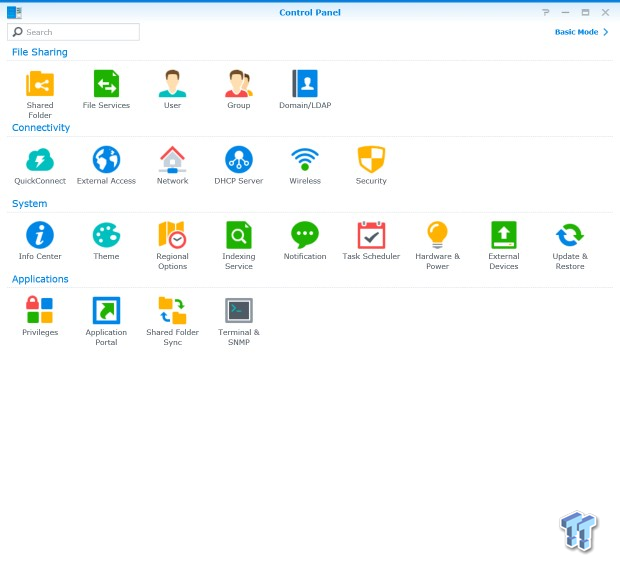 The control panel is similar to other DSM 6 platform appliances.

The overlay menu that you can get to by clicking the icon on the desktop looks barren compared the DS916+ we just reviewed, but it does house file station and the storage manager. 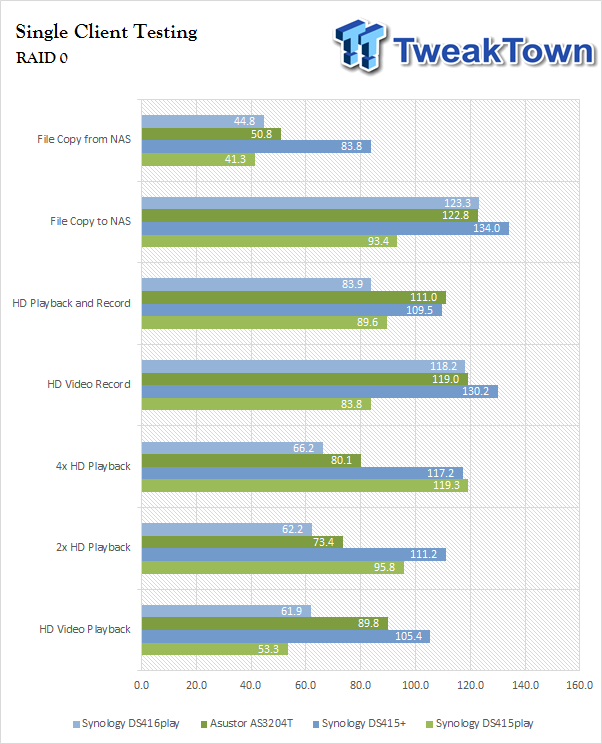 In testing, I included past appliances from Synology along with the only other Braswell four bay I have tested, the AS3204T from ASUSTOR.

As you can see in the chart above, the 416play was quite competitive when going directly against the 3204T. Peak performance was 123 MB/s in file copy while playback topped out at 66 MB/s in all three test scenarios. 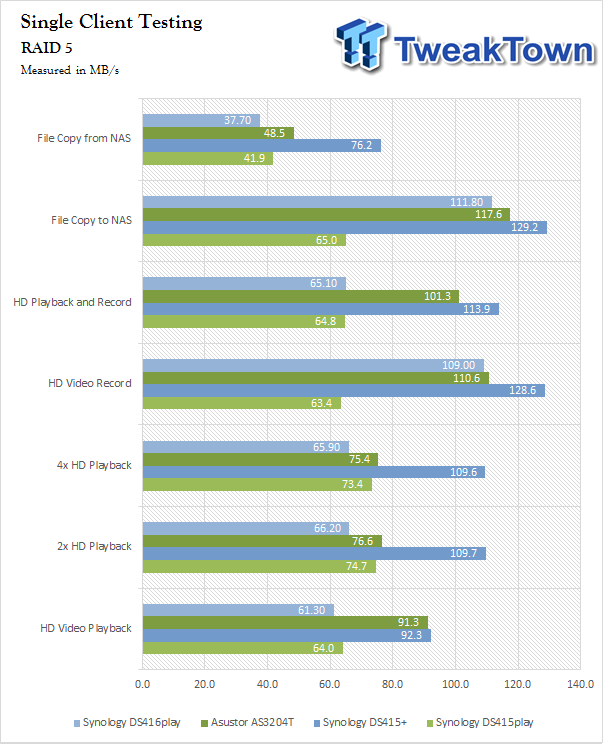 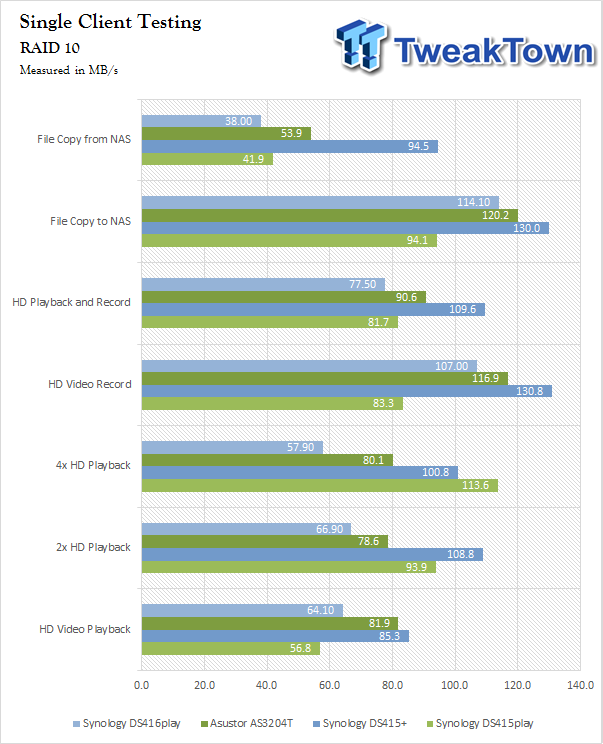 In our last mode, RAID 10 single client, results allowed for a peak of 114MB/s while playback hovered once again around the 60 MB/s mark. 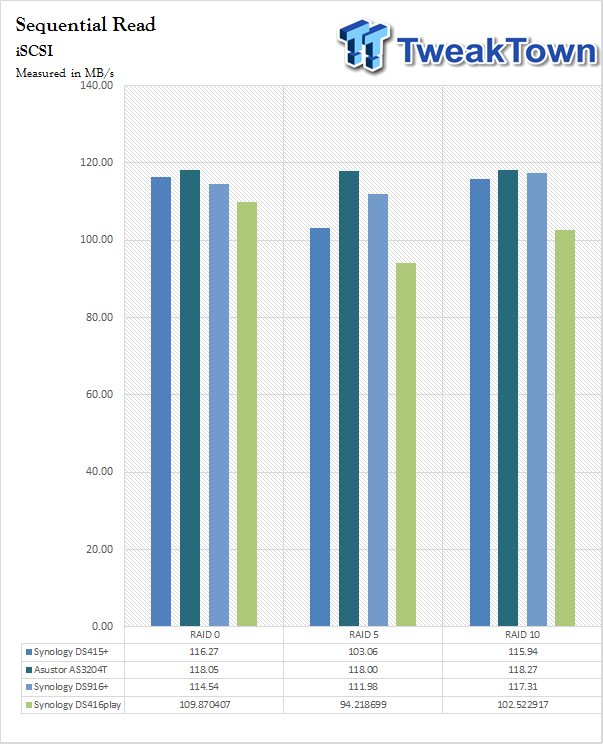 Sequential results pushed the DS416play as read performance topped out just under 109 MB/s in iSCSI. 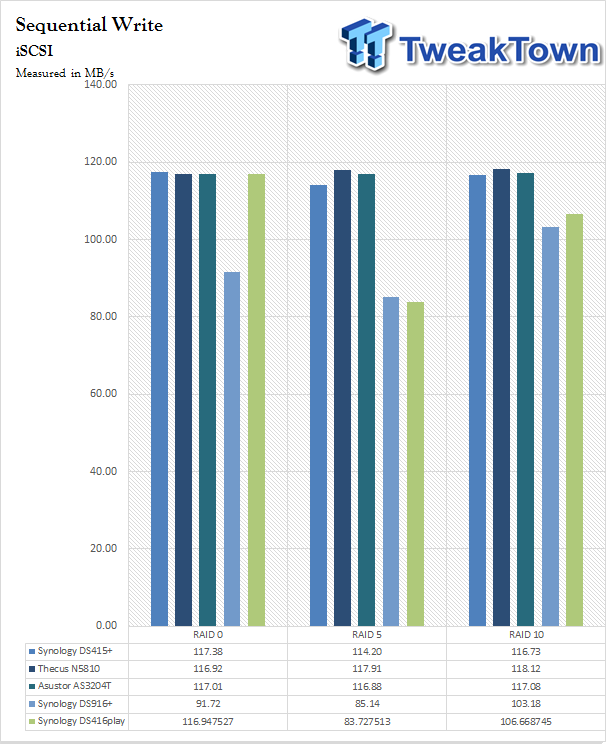 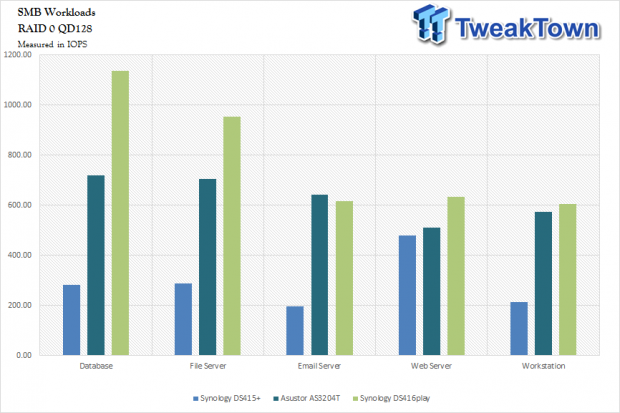 To show workload performance more accurately, I had to remove the DS916+ from these charts as it was far above the performance of the other appliances but with that let us get right into the results.

In RAID 0, the DS416play performed amazingly well, coming very close to 1200 IOPS in Database while File Server reached near 1000 and the last three were a hair above 600 IOPS. 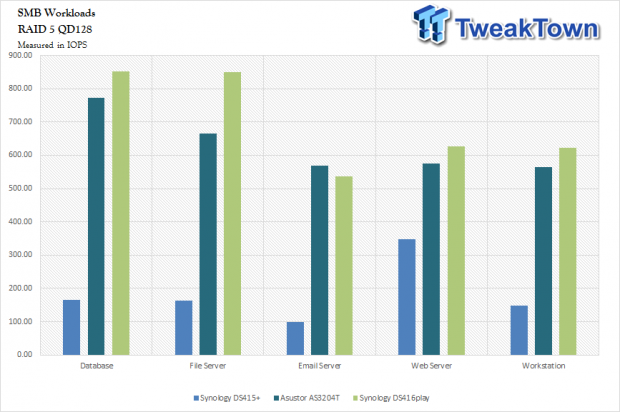 RAID 5 showed the DS416play and ASUSTOR AS3204T trading shots with the Synology winning a majority of the battles with its slight CPU advantage. 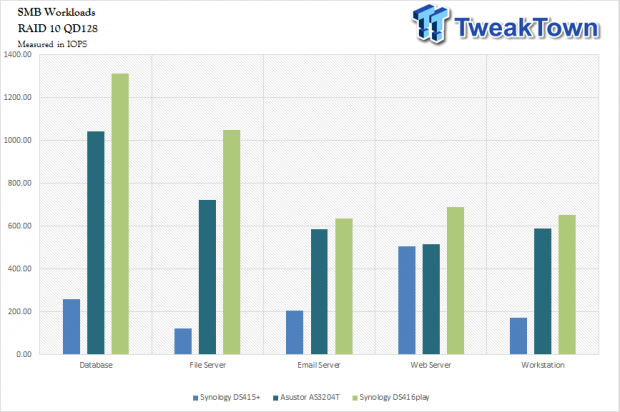 With RAID 10, things again were close to the ASUSTOR unit on several occasions, but the DS416play prevailed with 1300 IOPS peak in Database followed by 1000 in File Server.

Over the next few months, I am going to be revamping and adding more tests and charts to my reviews in hope for better overall comparisons between appliances. As it sits now, the DS416play is a solid four-bay entry for those wanting to get into the market at this tier, and its also a solid upgrade path for those on a two-bay solution, especially if you are already in the DSM ecosystem with a DS216 or 216play. The build quality is solid even with a majority of the unit comprised of plastic, and features like tool-less trays only add to this as a package.

The performance was quite good with the 416play, and it positions itself as a solid upgrade over the DS415play from two years ago. The added horsepower not only boosts this device's capability as a media streamer and transcoding box, but also increased the file performance in many cases.

Single client results topped 120 MB/s in file copy operations while Playback and Record were equally solid at 83 MB/s and 118 MB/s in RAID 0. Sequential numbers stacked all tested appliances in tight, but the DS416play was able to come away with 109 MB/s read and 102 MB/s write. While on the other hand moving to workload testing, RAID 0 allowed the DS416play to top both the DS415+ and AS3204T by a solid 400 IOPs in Database, while Email and Web Server had both appliances real close.

In closing, I like the DS416play; it's a solid performer for its intended market and a definite upgrade over its predecessor. For anyone wanting to break into the four-bay NAS market, it is an excellent way to start with an MSRP of $459.99, making it one of the better sub-$500 appliances you can pick.

The Bottom Line: Synology's DS416play is a value-oriented NAS appliance that with its performance makes it a solid option for those wanting to break into the four-bay market without breaking your bank account balance into pieces.