As part of the new ARRIS RipCurrent lineup, the AC1200P and 1000P are solid solutions to extending your home network with ease.

After taking a look at the mid-range AC1900 RipCurrent wireless router, we decided to move on and test a few of the extenders that were launched alongside. These extenders take full advantage of RipCurrent technology to extend your network.

Today, on the bench I have two new RipCurrent extenders from ARRIS. These include the 1000p gigabit wired solution along with the AC1200p 802.11ac wireless AP. Both solutions require one of three wireless routers to work, and as you most likely seen in our recent review of the SBR-AC1900p, these solutions carry the same aesthetics.

On the tech side of things, the SBX-1000p features a G.hn input that is HomeGrid certified and a single gigabit output, perfect for extending your network for gaming consoles or PCs. On the other side, the SBX-AC1200p is a dual-band AC1200 access point that is capable of 900 Mbps on the 5GHz band and 300 Mbps on the 2.4GHz, and again connectivity is managed through RipCurrent.

Compatibility includes modern browsers along with SURFboard manager available on both iOS and Android. MSRP of the SBX-1000p comes in at $59.99 while the SBX-AC1200p is slightly higher at $99.99, and both products carry a two-year warranty.

Diving right in, we have both extenders sharing the same packaging as the router. The front is quite colorful with an image of the devices on the front. 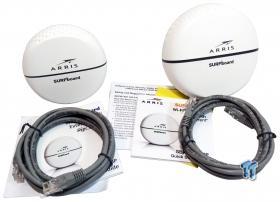 The scope of delivery includes Ethernet cables and reading materials for each extender. 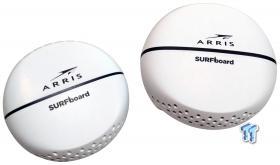 The front of the adapter houses an LED in the center that depending on color tells you the status.

On the bottom side, each extender has a gigabit port while the sync button is to the left. 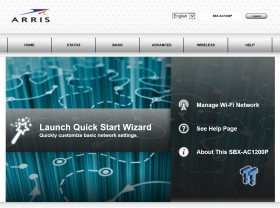 The menu for the extenders is similar to the router with tabs across the top.

The basic menu allows for LED control, just an on or off feature. 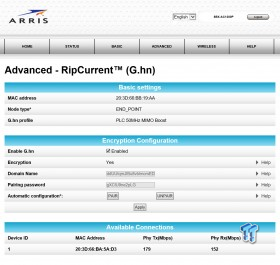 On the advanced menu, we have several options. One of which is the G.hn functionality. 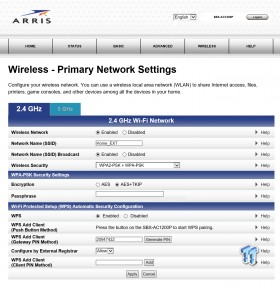 Since we are showing the AC1200p menu items, we have access to the wireless radios, both 2.4 and 5GHz. 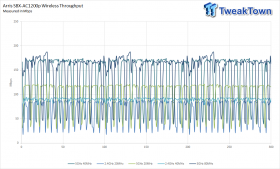 In testing, we were limited by the throughput of the electrical lines in my home. This depends on the distance and how many junctions the devices have to connect through. I was able to get a peak rate of 440 Mbps over powerline, and that translated over to the results you see in the chart. As you can see peak throughput never went above 175 Mbps, even when testing the 80MHz 5GHz band. 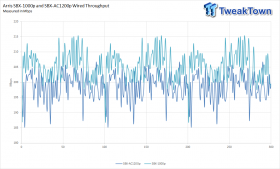 Let me first start by saying these extenders are part of an ecosystem. For those that purchased one of the new RipCurrent routers from ARRIS' portfolio, the SBX-1000p and SBX-AC1200p are intended to extend those networks. I'm unsure if these devices work with any other powerline technology as I don't have any adapter in-house at this point. With that said, the build quality of these extenders is 100% solid. Like the router, I wasn't able to get inside these either as ARRIS' have seemingly glued them together.

Performance in each use case will surely depend on the homes wiring and with the routers using all three plugs in the receptacle you will want to make sure your home is up to code. The performance I received was with the RipCurrent adapters in a home use setting. I have my AC1900p router in the main living area, and one extender in an office upstairs and the other was placed near the garage to extend the wireless signal. In my testing, I wasn't able to get over 175Mbps via wireless but was able to conquer 215 Mbps on a wired connection.

These adapters as part of the new ARRIS ecosystem are solid little units, with that main downside being they do tend to block the second port in your receptacles. On the plus side, I don't think I have ever had an easier time setting up an extender. I honestly had the router and both extenders running in less than ten minutes.

The Bottom Line: As part of the new ARRIS RipCurrent lineup, the AC1200P and 1000P are solid solutions to extending your home network with ease.