Teenage Mutant Ninja Turtles: Out of the Shadows (2016)

Against the odds, the 2014 big screen adaptation of Teenage Mutant Ninja Turtles was a huge hit for Paramount Pictures, grossing nearly $500 million worldwide on a $125 million budget. In typical Hollywood fashion, naturally a sequel was commissioned immediately.

But with hundreds of comics, 5 previous feature films and more than 10 seasons of TV shows, there's no shortage of material to pull from, and the latest feature Out of the Shadows amps up the nostalgia factor with the introduction of fan-favorite elements such as the genetic experiments Bebop and Rocksteady, the walking brain Krang and mad scientist Baxter Stockman. 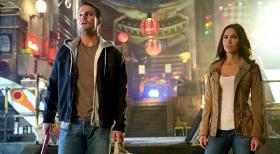 Despite liberating New York City from the rule of Shredder (Brian Tee) and the Foot Clan, the Teenage Mutant Ninja Turtles have been forced to return to the sewers and remain unseen from a world not ready to embrace their kind. But when Shredder is broken out of police custody alongside Bebop (Gary Anthony Williams) and Rocksteady (Stephen Farrelly), the trio become recruited in an Earth takeover by an interstellar being named Krang (Brad Garrett) and his weapon of mass destruction; the Technodrome. 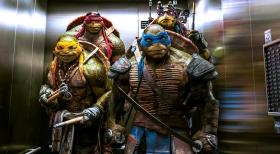 10 minutes into Out of the Shadows, I was hit by a revelation. To get any enjoyment out of this film, I was going to have to pretend I was ten years old again. As good as the original Ninja Turtles cartoon and its old school, animatronic, Vanilla Ice infused feature films were - they were goofy as hell and made with a much young demographic in mind. After getting through the toe-tapping theme song, the reality is that trying to relive the experience as an adult is about as successful as you might think, even with the nostalgia filter engaged. And it's this same ethos that Out of the Shadows rather successfully rises to. 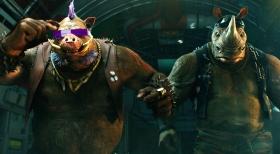 With a new director on board, Out of the Shadows is a much tighter and significantly more enjoyable experience than its predecessor. Don't get me wrong; it's still as flawed and full of cringe-worthy plotting and dialogue, but this time around it doesn't take itself as seriously and benefits from strengthened links to what's come before it.

The turtles themselves are as freakishly bizarre and steroid-pumped up as before (just what was wrong with the old designs?), but they still carry the surfer dude attitude (even if they don't say "cowabunga" anymore) and still love pizza. This is a film that's not trying to create a new generation of fans. Rather it's bending over backward to appeal to the legions of pre-existing fans - even if those that grew up with the original are now in their thirties (guilty). 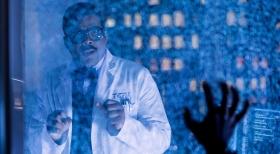 Led by Megan Fox, the human cast plays second fiddle to the titular CG monstrosities, and as the film goes on, become more and more superfluous to the proceedings. In a curious turn, the uber-villain Shredder has undergone a re-design to more closely resemble his appearance in the original cartoon and has been recast with a new actor, only to be sidelined by the other new villains. Perhaps he was going to feature an enhanced role in the next film. I say 'going,' because it's just not going to happen.

Unlike its money-spinning predecessor, Out of the Shadows has been a financial bomb, only just recouping its $135-million-dollar production budget after taking into account international box office. That not only sinks plans for a sequel (the door was very deliberately left open for more) but doubtless means the franchise will be rested to return in yet another reboot down the line. Sure, the reimagined series did plenty of things wrong, but it also got a lot right. Sadly, the performance of Out of the Shadows has ensured that the Ninja Turtles now have to return to the shadows. 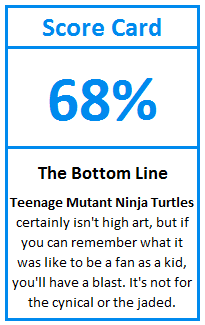