For the last few years decades, the explosion in the comic book sub-genre has seen studios fall over themselves to secure the rights to every big name (and not so well-known) characters for big screen exploitation, including Twentieth Century Fox who's successfully pimped the X-Men franchise to the tune of over $3.5 billion since 1999.

Which makes their reticence to bring the X-Men spin-off Deadpool to the big screen more than a head scratcher, only greenlighting an extremely modestly budgeted film after test footage was leaked to rapturous online approval. So now it's finally here, how does the Ryan Reynolds pet project translate to the cinema? Very well, it seems. 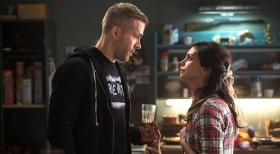 On the verge of personal happiness with his love Vanessa (Morena Baccarin), Special Forces solider turned mercenary Wade Wilson (Ryan Reynolds) is tragically struck down with an aggressive and terminal form of cancer. When Wilson takes up a mysterious stranger's offer for a chance to recover via an experimental procedure, Wilson is subjected to horrendous torture to awaken a genetic mutation in his cells. While the ordeal eventually successfully fights off the cancer, it also leaves him horribly disfigured. With nothing left to fight for, Wade takes up the alter ego of Deadpool and tracks down his malicious benefactor to unleash his unusually sadistic blend of revenge. 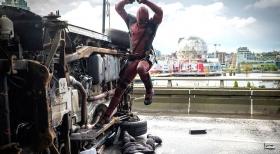 Despite their intense popularity, it's become increasingly evident that audiences are becoming bored of the competently made, yet risk-averse film formula (I'm looking at you, Marvel), which is why Deadpool comes in as such a huge breath of fresh air. A comic book adaptation made for adults (and adolescents who've snuck into the cinema), with equal parts action, sex appeal, crass one-liners and some genuine heart thrown in for good measure. Even with an economical $58 million production budget (less than half that provided to Ant-Man and nearly a fifth of Avengers: Age of Ultron's, Deadpool presented somewhat of a risk for Fox, both financially - (R-rated films are rarely financial windfalls due to reduced attendances) and also the potential to cause damage to the X-Men cash-cow.

But in grossing over ten times its budget in just a few weeks, it's become entirely clear that there's a strong demand for the unique type of experience that Deadpool offers, and which will cause studio heads to scramble their property strategies. 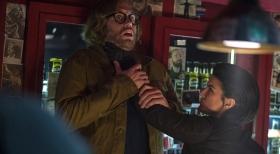 The success of Deadpool can be narrowed down largely to star Ryan Reynolds and first-time director Tim Miller, who've battled for years to get the film to the screen as a labor of love, alongside screenwriters Rhett Reese and Paul Wernick. They've produced a subversive and whip-smart film which not only isn't afraid to revel in self-deprecating humor but which makes for some of the biggest laughs, as it eagerly breaks the genre's rules and cinemas too.

While the budget mentioned above doesn't allow the film to revel in quite the same degree of digitally enhanced large screen battles as its compatriots, that's not what Deadpool is, or what the film was aiming for. The show is even clever enough to wear its limitations as a badge of honor, informing some of the best running gags when the merc repeatedly forgets his cache of weaponry - eschewing costly firefights in the process. 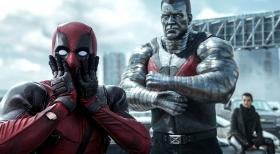 It's great to see the superhero genre push back on the constraints of the genre, but what works for the character of Deadpool doesn't necessarily apply across the board. And I'm admittedly a little fearful that studios are ultimately going to take away the wrong lesson from the film's success and try to emulate the style onto other pictures. Still, whichever way you slice it (and there's plenty of that on the screen), Deadpool is one of the most entertaining, frequently hilarious films I've seen in recent times.

In fact, I laughed harder in the first minute than I did in the whole of Zoolander 2 a week previously. Deadpool is the real deal, the breakout superhero flick of the year, with a courage to do things a little differently that should be applauded - but not quickly replicated. 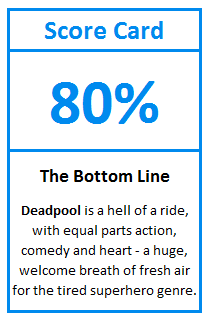