Hollywood is never content to let a good idea go, with a weird love of doing things in twos - see Deep Impact and Armageddon, Antz and A Bug's Life, and Jobs and Steve Jobs. But while the previous biopic on the life of Apple founder Steve Jobs - a glorified TV movie that was rushed to cinemas barely a year and a half after his death, the latest biopic comes with some strong backing, based on the 2011 biography of the same name by Walter Isaacson (which is probably the best book I've ever read).

With many of the real-life figures providing input, such as Apple co-founder Steve Wozniak, long-time personal assistant Joanna Hoffman, and Jobs' daughter Lisa Brennan-Jobs contributing to the screenplay, Steve Jobs is probably the definitive cinematic word on one of the most visionary, the most influential, and yet flawed individuals of the 20th century. 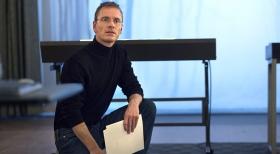 Told through three key formative moments of Apple's history over 15 years - the launch of Apple Macintosh, NeXT and the iMac G3, which in turn finds the Apple co-founder Steve Jobs (Michael Fassbender) at different stages of his life through the prism of his strained (even tortured) relationships with key members of his staff, estranged wife and a daughter he refuses to acknowledge as his own. In flashback too, we see Jobs falling out and ultimate removal from the company he helped to build, his resentment towards the past, including the men and women who designed the Apple II and which kept the company afloat through Jobs' flights of fancy, and his connection with marketing assistant/ confidant Joanna Hoffmann (Kate Winslet) - one of the few staff who was able to engage with Jobs in a manner that could be deemed 'respectful'. 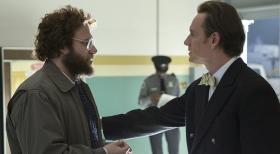 In death, just as in life, Jobs remains a polarizing figure, a man of intense contradictions, with equal amounts of intelligence, wit, and generosity, all countered by equal measures of defiance, malice, and selfishness. Make no mistake, this isn't a Hollywood whitewash. Some younger, more naïve Apple fans might even be a little shocked at what they see. Steve Jobs is a warts-and-all character exploration of the man who built Apple, whose dogged refusal to accept reality trashed the majority of his personal and professional relationships and nearly bought the company down, before ultimately building it back up to one of the most profitable companies in history. 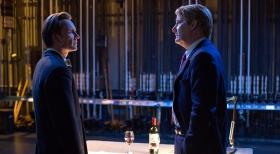 While it's immediately obvious that Michael Fassbender isn't endowed with the same convincing physical attributes compared to Ashton Kutcher, his nuanced portrayal of the man goes a long, long way to making the audience believe he could just be Jobs reincarnate. Proving his Oscar nomination was no mistake, Fassbender finely balances the role of the public genius frequently teetering on the brink of mania, but also allows you to feel empathy for the man who describes himself as being "built with crippling imperfections." Seth Rogen seems relatively unstretched in the role of co-founder Steve Wozniak in a role not too dissimilar to his usual affable knockabout characters (albeit considerably more serious). And the ever-reliable Kate Winslet has more freedom to bring the lesser known character of Joanna Hoffman to life, imbuing it with a quiet dignity, but with an intensity that equally matches Jobs own when push comes to shove. 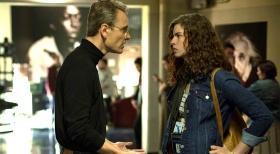 Screenwriter Aaron Sorkin has a very well regarded reputation for producing tight scripts with razor-sharp dialogue and the wise choice to distill Walter Isaacson's fine autobiography into three distinct eras is a clever narrative ploy provides the opportunity to go a little deeper, rather than zip unsatisfactorily over his entire life and allows Fassbender to display Jobs' personal growth (and in some cases, regression).

While there's no doubt that Steve Jobs is a dramatized portrayal of events, the often conflicting recollections of those presented (probably unassisted by the pressure by many still in the game to deify the Apple co-founder) the film appears on the surface to be a fair and accurate portrayal of the events both in front of and behind the scenes. But Steve Jobs biggest success is the way in which allows the viewer to get inside Jobs' head, witness some of his worst behavior, and yet still feel empathy for his single-minded drive to revolutionize the world. 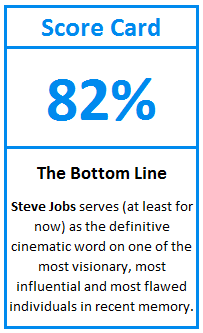