A new Tarantino film is somewhat of an event in pop culture circles, only coming around every three or so years and featuring trademark unmistakable flourishes, including blood, 70's style music cues, gratuitous shots of feet, blood and Samuel L. Jackson. Oh, and did I mention blood? While I can't say that The Hateful Eight is the director's finest moment, there's no avoiding the fact that even sub-par Tarantino is better than most director's absolute best. 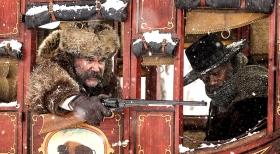 With a fearsome blizzard bearing down, bounty hunter Major Warren (Samuel L. Jackson) hitches a stagecoach ride with fellow hunter John Ruth (Kurt Russell) and his delightfully crass bounty Daisy Domergue (Jennifer Jason Leigh) who's set for death by hanging upon their arrival at Red Rock. Along the way the pick up another straggler; a man who claims to be the town's new sheriff.

But when their collective mission is delayed by taking shelter at a lodge until the storm passes, which is already occupied by an eclectic and shady band of individuals, it becomes clear that not everyone is who they claim to be – and their thrusting together is no mere coincidence. 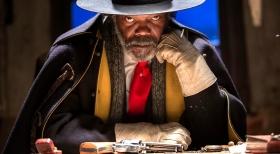 Love him or hate him, there's something undeniably enthralling about Tarantino's flavor of filmmaking that makes them stand alone. There's a reason why there's a three-year gap between each film. Tarantino polishes the script to perfection (he even had to rewrite the final act after the script was leaked by Gawker), casts the best actor for the job (well, maybe Michael Madsen gets a free pass here), and edits pretty tightly (even if the film's runtime is dauntingly generous to some). 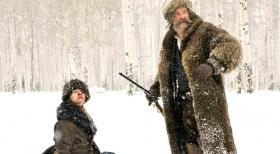 Even if The Hateful Eight's tension takes a while to come to the boil, it's a pretty sustained burn - no mean feat for a film that manages to keep interest levels very high throughout its three-hour duration. There's a lot to admire here, including a noticeable absence of phoned-in performances from a sublime cast including Kurt Russell and Samuel L. Jackson, who are so obviously committed and take the form of their characters such that I'd be well inclined to believe they'd be perfectly at home in a post-Civil-War 1800's. That said, there's no avoiding the fact that it's not his finest work, with noticeably less energy than his career best (at least to me); Inglorious Basterds, coupled with a single-set backdrop that starts to get a little dry after a while. 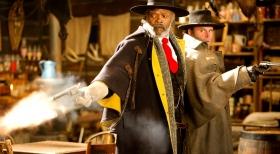 Much has been made of Tarantino's George Lucas-esque preference, nay - demand for high-quality 70mm projection, but in truth, the film doesn't probably doesn't do it justice. (That is if you can even find a cinema that's playing it in the large frame format). While a western it certainly is, it shares little in common with the rousing John Wayne entries of yesteryear filled with majestic shots of beautiful exterior cinematography. No - 99 percent of The Hateful Eight takes place within the confines of the dimly lit haberdashery cabin, leaving little scope for the fine-grained transfer to really come to life. Still, the promise of an exclusive extra 12 minutes of footage might be enough to justify the price premium. And, if I'm being honest, I'd probably see it just for the novelty – there hasn't been a 70mm production for nigh on 50 years.

Like all of Tarantino's output, films like The Hateful Eight certainly don't come around very often. If you have the nerve to stomach it, it's perfectly enjoyable, pulp cinema which deserves to be seen by a fellow audience. Just makes sure you go to the toilet before it starts, get comfy and soak it up. You'll have to wait a few years for the next one. 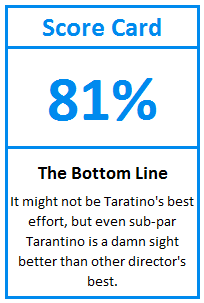