From humble beginnings in 1993, The X-Files rapidly amassed a large and loyal cult following, pushing the envelope and presenting audiences with a dose of theatrical quality TV week after week. While it's true that the series ran out of steam late in its run, a similar fate as many other long-running shows, the 201 episodes that make up its nine-season duration hold up remarkably well today. That the show is still so revered and admired nearly fourteen years from leaving the airwaves made it a prime candidate for a full high definition remaster - the source of this superb Blu-ray release.

Similar to most TV shows of the era, The X-Files was originally captured on 35mm negative, before being transferred to the standard definition realm during editing and assemblage of the master. This has been the source of all previous broadcast, VHS, laserdisc and DVD releases, featuring all the limitations of the technology, including woefully low resolution, analogue errors and artifacts. In the meantime, the original film negatives sat safely in archives at an undisclosed storage location - a mystery worthy of Mulder and Scully indeed. 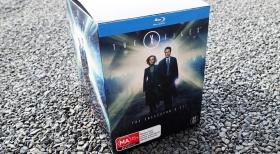 In 2013, Twentieth Century Fox hired Californian post-production facility Illuminate to undertake a nearly two-year project to scan millions of feet of the original negative and completely rebuild the show in high definition, the source of this spectacular new presentation. For more information on this remastering process, see our in-depth interview with Illuminate CEO Jim Hardy.

The Australian version of the Blu-ray boxset includes all 201 episodes of The X-Files, from seasons one to nine, as well as the two feature films Fight The Future and I Want to Believe and an empty spot for the forthcoming Blu-ray release of the six episode miniseries revival. 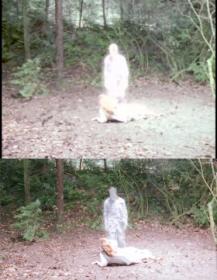 The X-Files is presented in the widescreen aspect ratio of 1.78:1 throughout all episodes.

While the first three seasons were originally filmed for a 1.33:1 square aspect ratio, there's been somewhat of a backlash to the decision to re-frame these episodes on this Blu-ray release for a widescreen aspect ratio, which arguably doesn't reflect the creative decisions of filmmakers, nor the original presentation. While I'm sympathetic to their complaints and normally a stickler for the original aspect ratio myself, there's no getting around the fact that the show looks undoubtedly more cinematic and infinitely improved by its new widescreen presentation.

Director of photography John Bartley had the foresight to shoot the first three seasons series protected for a 16x9 frame, and because Illuminate scanned the whole negative, there's more image on the side of the frame and slightly less on the top and bottom. I only recall two or three times, particularly in the first handful of episodes, where the framing was just a little too tight on the subject, compared to the multitude of shots which generally look better composed and more natural in widescreen. From season 4 onwards, the show was produced specifically for widescreen and thus features nearly identical framing on Blu-ray.

Unfortunately, Illuminate was unable to locate the entire original negative, necessitating some shots to be upscaled from the standard definition masters. These instances exhibit all of the flaws you'd expect, including analog artifacts, dot crawl, and a noticeable drop in resolution. While they're regrettable (albeit unavoidable), they stand to further prove how great the other 99% of native HD footage actually is. 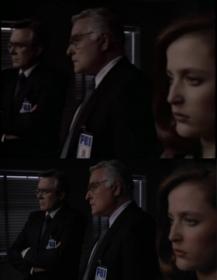 Barring the aforementioned, The X-Files in HD is a serious treat, with newfound clarity, stunning black levels, and rich upgrades to color and detail that simply haven't been glimpsed before now. From the opening shot of the pilot episode, with lush green forest and perfectly rendered black levels, it's clear that The X-Files in high definition is going to be something of a revelation. And thus, it proves to be. Marvel at Scully's freckles. See every line in Mulder's furrowed brow. Catch the now obvious flaw in the monster of the week makeup job! 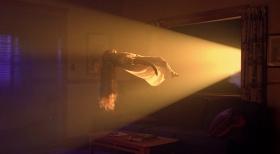 The X-Files is presented in a remixed DTS HD Master Audio 5.1 track at 24 bits.

Originally mixed for two channel stereo, each and every episode of The X-Files now sports a brand new 5.1 channel mix, courtesy of audio mixing facility Mi Casa Multimedia, which complements the newly improved visuals rather perfectly.

The X-Files was always a bit on the talky side, and while the mix reflects those origins, the soundstage is now much more spacious and far more 'alive' than ever before. The show always relied on general ambience to elicit reactions and set the mood, and this particularly benefits from the sonic upgrade. Sound effects are now positioned far more aggressively, and Mark Snow's iconic score spreads evenly across the front channels and bleeds nicely into the rears.

While perhaps still a little on the conservative side compared to the best modern production mixes, those more familiar with the traditional X-Files sound will be pleasantly surprised at the newfound aggressiveness of the tracks on offer. 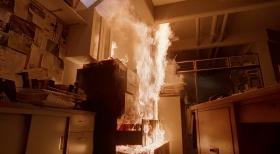 Proudly proclaiming the inclusion of over 23 hours of extra features on the front box, The X-Files comes to Blu-ray porting over all of the previous bonus features from the season DVD box sets, best of DVD volumes, and feature films. With features sprinkled throughout all 57 discs, you'll need to swap through quite a few discs to get to everything.

Some of the more interesting features are the 32 Audio Commentaries, which include a range of X-Files cast and crew luminaries, including actress Gillian Anderson, creator Chris Carter, directors Rob Bowman and Kim Manners, and writer/ producers Frank Spotnitz, R.W. Goodwin and Vince Gilligan (of Breaking Bad fame), which shed some interesting light on their production.

There's dozens of brief featurettes, including syndication produced Behind the Truth featurettes and multilingual clips that get pretty old fast, but the meatiest are the Truth About... documentaries which give some sometimes honest insights on the evolution of the series and generally run around 20 minutes a piece.

Some of the most in-depth material is reserved for the final disc of season nine, which includes a 90 minute Secrets of The X-Files featurette, a retrospective Reflections on The X-Files featurette, a one hour long documentary on the making of final episode; the Truth and a 2008 WonderCon panel reunion featuring Duchovny and Anderson. Both feature films also feature their own collection of extra features including Picture-in-Picture Commentaries, Featurettes, Documentaries, and Gag Reels.