In the last few decades, Mars has proved furtile ground for filmmakers, with projects such as Mission to Mars, The Red Planet, Mars Attacks!, Mars Needs Moms and Total Recall to name just a few. But none have ever really taken the opportunity to merge the genre with a Cast Away style theme of surviving in a literal alien environment - and the results are astonishing. 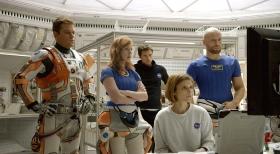 In an undated future, NASA has landed humanity on the surface of Mars and established a base with six crew members. But when a massive solar storm ravishes the planet and threatens to destroy their spacecraft; the Ares III, the crew decides to abandon the mission. During the escape, Astronaut Mark Watney (Matt Damon) is hurled out onto the surface, non-responsive and assumed dead. An hour after the crew fled to safety, Watney woke up alone and injured on the surface, having been impaled by a communications tower. With resources dwindling, he must employ his formidable training to survive long enough on the desolate planet and find a way to resume contact with NASA. 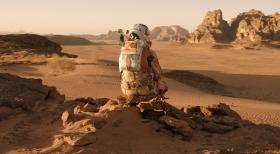 The Martian isn't a visual effects thrill ride. It also isn't a science fiction film. It's not filled with Star Trek gooblede gooke, Interstellar homesickness, or Gravity's existentialism. It is, however, a Cast Away style tale of survival, with Watney using his immense knowledge of science and sheer ingenuity to overcome obstacles to his survival and stave off the intense loneliness of life on the barren planet. It also happens to be one of the most entertaining films of the year. 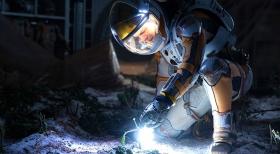 Matt Damon is undoubtedly the key to The Martian's success, imbuing his character with the right amount of humor, smarts and vulnerability and above all, I believe him as an astronaut. As Watney rides the crest of emotions in his journey, so do the audience - cheering his wins and bracing for his failures. As his rations decrease, and Watney fades before our eyes, the feeling is palpable, and it's an edge of the seat ride as audiences weigh up the distinct possibility that the ever-present obstacles might just overtake him. The supporting cast, led by Jessica Chastain in space, and Jeff Daniels on Earth are uniformly superb, with a keen focus on outcomes that doesn't drift off into cliché, or rely on the usual cardboard cutout character motivations.

Adapted for the screen by Drew Goddard from the 2011 novel by Andy Weir, The Martian just might be a rare case where a movie is as good as the source material, or at least manages to does it justice. Admittedly, I haven't read the book myself but from most accounts the film successfully manages to picks up on all the expected beats with laser-like focus. Equal praise, of course, goes to director Ridley Scott, who sure knows how to juggle spectacle, character and story in equal parts and when a project goes so right (take your pick from Blade Runner, Gladiator, Alien to name but a few). 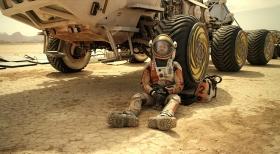 In an era where so many films either try so damn hard to do their thing with overly simplistic or overly complicated plots, bashing audiences over the head with the latest CG tricks or the latest flash-in-the-pan actor, a film like The Martian comes in as a breath of fresh air, walking to the beat of its own drum and with the confidence - nay the knowledge - that it's going to entertain the audience for the entirety of its duration. Ladies and Gentlemen, do yourselves a favor - The Martian simply does not disappoint. 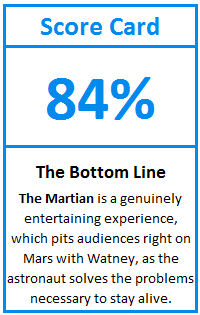