A quick trivia question: Has there ever been a feature film franchise which has 1) featured the same actor in a lead role, 2) spans two decades and 3) has gotten better with each entry? Well, I must admit I'm struggling to think of another example other than Mission Impossible - and the good news is that Rogue Nation is indeed all these things, and so much more. 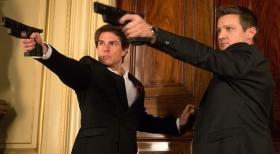 Following directly from the events of Ghost Protocol, the IMF has been disbanded after being wrongly, but publicly blamed for the destruction of the Kremlin and Ethan Hunt (Tom Cruise) being cut off. Determined to uncover the real enemy, the shadowy Syndicate organization, Hunt follows a slim lead to track down the organization's head, Solomon Lane (Sean Harris). To do so, Hunt must rely on his wits and the assistance of his friends in the IMF, including Benji (Simon Pegg) and Brandt (Jeremy Renner), along with the mysterious Ilsa Faust (Rebecca Ferguson) - who may or may not be an ally, in order to take down the organization and evade agents sent by the country he's sworn to protect.

Despite the eccentricities of his personal life (coming only months after the release of Alex Gibney's damning scientology documentary), there's no denying the commitment by Tom Cruise to his craft, who continues to run and jumps like a man half his age and as if his very life depends on it. 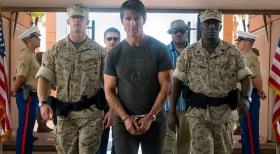 Returning for a fifth time to perform a show-stopping, real-life stunt to top that of Ghost Protocol, which flung the actor off the side of the Burj Khalifa; still the world's tallest building. Rogue Nation seeks to up the ante by hanging the actor off the wing of an Airbus 400M as it taxis off the runway and ascends to 1500 metres. But whilst the stunt in the previous film was crucial to the film's plot, this time it's more akin to a Bond opening sequence, which has precious little to actually do with the film. It's also a noticeable shift that the film's most impressive visuals come at the opening and not at the conclusion, which instead plays out as a close quarters conflict between the hero and the villain.

Rather than serving as a love interest, Swedish actress Rebecca Ferguson plays an ass-kicking female lead, whom it must be noted also performs many of her own stunts. A relative Hollywood newcomer, I'm sure we'll be seeing a whole lot more of her soon. Reprising their roles from previous entries are Simon Pegg, Jeremy Renner and Ving Rhames, which is not only cool for consistency sake, but is a real joy for audiences to see their genuine on-screen rapport, which has been built over the last few films. 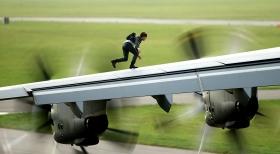 Writer-Director is Christopher McQuarrie, who previously directed Cruise in 2011's Jack Reacher and also wrote Rogue Nation's screenplay. With superb action sensibilities, McQuarrie proves a great fit for the franchise, and brings real dramatic weight to proceedings. While it's fair to say that the Mission Impossible franchise started life rockily and as a James Bond style carbon copy, it has evolved into something much, much more, whilst staying true to its television origins, whilst updating it superbly for today's sensibilities and expectations. Rogue Nation is undoubtedly the best of the series thus far, and might just be one of the most well rounded Hollywood action films of the year. 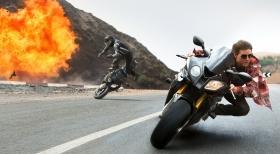 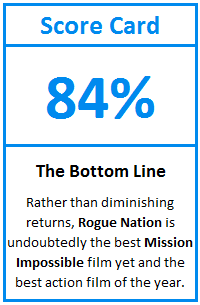