Akitio's Thunder2 Quad Mini external storage enclosure has tremendous performance potential, but the initial cost may be too much for many in the market.

It has been awhile since we have seen new solutions from Akitio. With that said we knew it was only a matter of time before they added to their portfolio of Thunderbolt storage. Today we have their latest four bay enclosure in house, the Thunder2 Quad Mini.

The Thunder2 Quad Mini is the latest four bay Thunderbolt 2 solution to come from Akitio's extensive portfolio. This solution, as mentioned above, features four bays of SATA III connectivity configured as a JBOD only unit, but as you will see in our testing, it can be configured with Apple Software RAID.

Two Thunderbolt connectors on the backside of the unit allow for connectivity to your PC while daisy chaining to a second device. Compatibility of the Thunder2 Quad Mini allows both Windows and Mac support. In addition, the Thunder2 Quad is supported by Data Multiplier Software allowing users to copy data from a single source to multiple disks.

MSRP of the Akitio Thunder2 Quad Mini comes in at $349.99 with a one-year warranty. 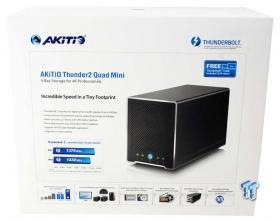 Packaging for the Thunder2 Quad is quite similar to previous solutions from Akitio. Here, we have a white box with an image of the enclosure on the front. To the left, we have marketing performance while the bottom houses use scenarios. 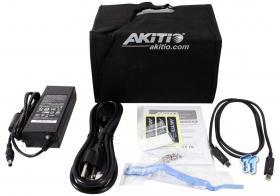 Scope of delivery includes the power adapter, reading materials, and a Thunderbolt cable. At the top, a carrying bag with Akitio's logo protects the Thunder2 Quad. 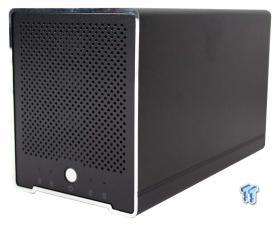 Looking at the Thunder2, the front of the enclosure houses a vented panel allowing air to pass-through and cool the drives. Along the bottom, we have a series of LEDs indicating everything from power to drive activity. 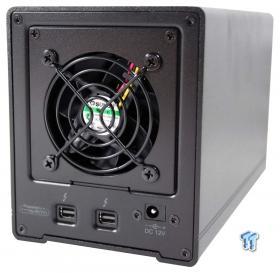 The back of the enclosure houses the cooling fan, power input and dual Thunderbolt 2 ports. 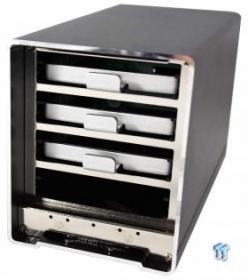 Opening the unit, we find aluminium drive trays, while these are simple units they do allow both the top and bottom of the drive to be cooled simultaneously. 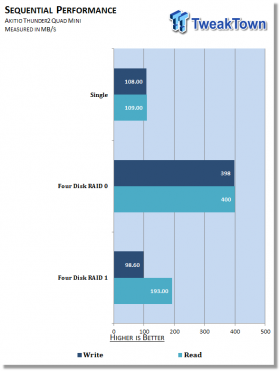 To test the Thunder2 Quad Mini, we used our Late 2013 MacBook Pro. Using Apple Software RAID, we went through all available array types. The drives used in the next two charts are Seagate Laptop solutions and as such performance would most certainly be much higher if you were to use SSDs. Starting with our single disk testing, our drives came in at 109 MB/s read and 108 MB/s write. Our RAID 0 array was able to get pretty decent results at 400 MB/s read and 398 MB/ write, while RAID 1 came in at 193 MB/s read and 98 MB/s write. 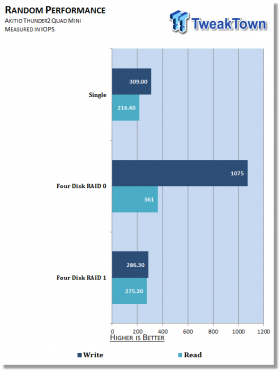 Continuing on, we ran the Thunder2 through random I/O testing where our single disk setup came in at 216 IOPS read and 309 IOPS write. Our RAID 0 array carried quite a bit of write performance with 1075 IOPS write, while RAID 1 as expected came in at 275 IOPS read followed by 286 IOPS write.

In the past, we have seen a number of Thunderbolt solutions come through the lab. With many of these solutions being from Akitio, I feel the Thunder2 lives up to the build quality we have seen from them in the past. While there are certainly areas that could be refined within this unit, such as the front panel, overall the aluminium designs adds to both the aesthetics appeal and build quality. Connectivity options are plentiful with the Thunder2, thanks to Thunderbolt technology which doubles as both a high performance connectivity option, while offering daisy chaining for additional devices.

Performance of the Thunder2 with the tested drives was acceptable while we certainly know more performance is to be offered with SSDs. In our testing, we were able to achieve peak read and write performance with our software RAID 0 at 400 MB/s read and 398 MB/s write, while random performance peaked again with RAID 0 at 1075 IOPS write.

With this said, the Akitio Thunder2 Quad Mini is offered in several versions ranging from a four disk 1TB SSD model that will set you back $2,689.99 along with a four disk 3TB SSD model for an amazing $12,999. However, for most of us, the diskless or HDD model will be preferred with those coming in at $959.99 for four 2TB disks and $349.99 diskless.

The Bottom Line: Akitio's Thunder2 Quad Mini external storage enclosure has tremendous performance potential, but the initial cost may be too much for many in the market.