In 1993, Spielberg's Jurassic Park quickly became the highest grossing motion picture of all time, (at least until James Cameron's Titanic set sail) and spurned two diminishing sequels over the span of the next eight years. But the last, the bland Jurassic Park III was a disappointment, and it has been a long time since drinks - entire franchises such as the Marvel Cinematic Universe, Harry Potter and Lord of the Rings have been born in the interim - and others like Spider-Man and Fantastic Four have been created and then rebooted! So the question remains; does Jurassic World still have the pulling power to compete in a different world? 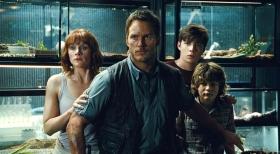 20 years on from the failure of John Hammond's original Jurassic Park, the Simon Masrani (Irrfan Khan) has finally realised the dream - creating a fully functioning park full of dinosaurs brought back to life thanks to genetic manipulation. But the public, no longer enamored with the resurrection of the giants of the past have grown tired and so park operations manager Beth (Bryce Dallas Howard) has authorized the creation of an entirely new breed of dinosaur; the Indominus Rex in order to reverse sagging visitor numbers.

Velociraptor trainer Owen Grady (Chris Pratt) is appalled by the arrogance on display and is proved correct when the unpredictable beast escapes its pen, indiscriminately slaughtering the 'exhibits' as bloodsport and making its way around the island to the assembled throng of visitors awaiting evacuation from the island. 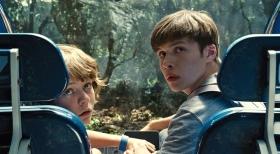 Releasing in the middle of perhaps the busiest summer blockbuster season in living memory, with high profile entries such as Terminator, Fast and the Furious and The Avengers, Jurassic World has to overcome some pretty hefty competition to make its mark - not least to meet the standard set by its forebears.

But on any measure, Jurassic World utterly delivers. This is a rollicking, crowd pleasing film which revels in sheer, unadulterated fun. Filled with some amazing sequences and visuals and that previously couldn't be realized due to lack of technology or audaciousness, Jurassic World doesn't feel the need to pander to expectation or simply retread what has come before, but happily treads its own path.

Off the back of boundless charisma and a star-making role in Guardians of the Galaxy, leading man Chris Pratt is perfectly cast in his role as alpha to the park's velociraptors, proving that there is a smidgen of hope for man and dinosaur to co-exist in an imperfect and bond, displayed through humility in the face of the park's overwhelming hubris. There's even a bit of chemistry on display with Bryce Dallas Howard as the steely career-woman who steps up as the park falls around her, even if their match feels a little forced. 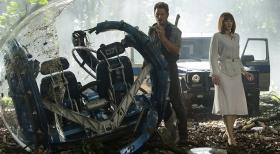 Just as George Lucas inspired a generation of Hollywood filmmakers with Star Wars, a new crop of directors raised on films such as Jurassic Park are beginning to make their mark, with Director Colin Trevorrow proudly proclaiming his love for the film in interviews and promotions. But these aren't just mere words - it's entirely visible on the screen. Make no mistake, Jurassic World is a film made by fans, for the fans. The reverence to the original is evident, not just in the numerous nods to the original (both subtle and not so subtle) and the film walks a fine line between nostalgia and giving the audience something they've never seen before.

This isn't a sequel for sequel's sake. There's a clear raison d'etre - it's a film that has something worthwhile to say, which propels the franchise forward and leaves the door ajar for more into the future. If they're of the same standard as Jurassic World, then bring them on. The world always needs more dinosaurs. 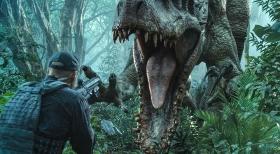 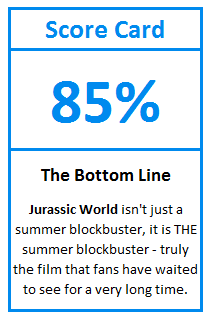