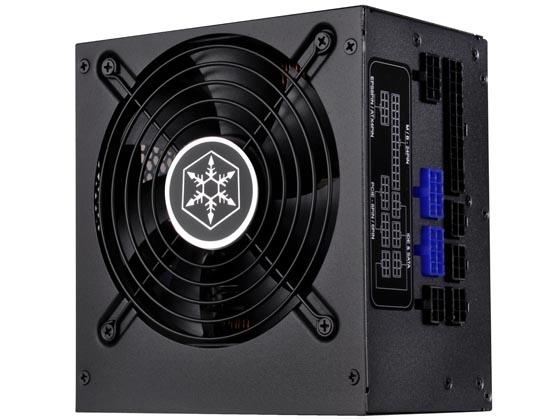 SilverStone feels like a house name here at TweakTown. We have covered almost every single product they have offered to consumers in the last five years or more. They have something for everyone ranging from entry level to enthusiast, and mainstream to niche. This carries into the power supply line as well. Need an SFX power supply? No problem. Need a high-end unit for your server? They've got that too!

The unit that we have on our bench today is the SilverStone SST-ST75F-GS. It is one of the latest in the line of short but modular units. SilverStone claims it to have the same output quality of their other units, which is certainly something that we've come to like throughout the years. This means voltage regulation and ripple should be within 3% of ATX specifications when all is said and done. These are the kind of claims that I love to see manufacturers make as they are easy to test and see if they are trying to pull a fast one over consumers.

Let's start looking at this one on paper so we can get to the testing sooner. 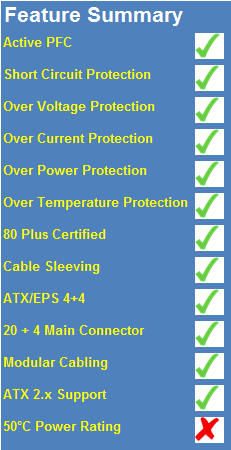 SilverStone always makes sure that you get plenty of features when buying one of their power supplies. The ST75F-GS power supply features a full suite of protections including SCP, OVP, OCP, OPP, and OTP. The ST75F-GS is rated for 80 PLUS Gold efficiency. The power supply is fully modular and all cables are of the flat ribbon type. Finally, the ST75F-GS series is not rated for 100% continuous output at 50C, but is at 40C.

SilverStone has an MSRP of $134.99. That places this priced right in the middle of the 750W crowd. This doesn't give it much of an edge against the competition as it doesn't have any special features or specifications that make it stand out from everything else. SilverStone will stand behind the ST75F-GS with their three-year warranty. 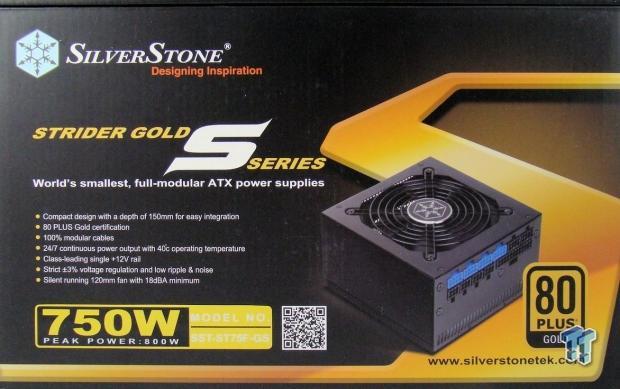 SilverStone's standard black and gold packaging is present here. The front of the box has a quick list of major features which is always nice to see. 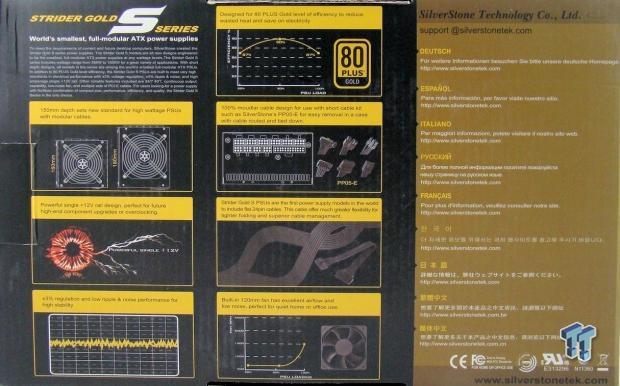 The back is filled with pictures talking about output quality, efficiency, size, cables, and more.

A list of connectors available are present on this side of the box. 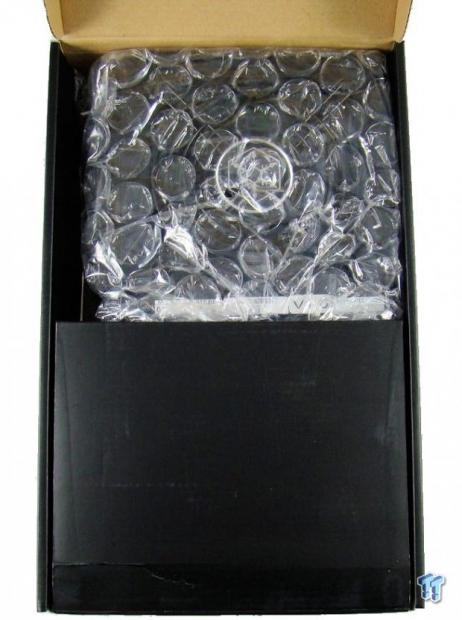 Opening the box, we find the unit protected by a single layer of large bubble wrap. This isn't the best we've seen by a long shot, but it seems to get the job done. 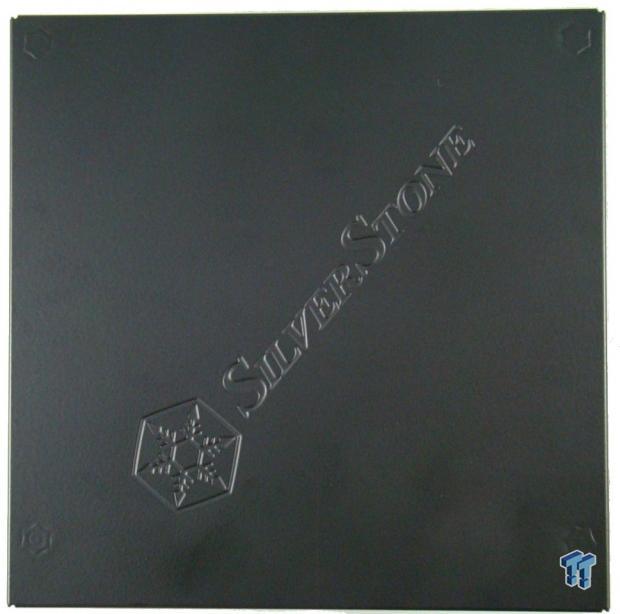 As always, the top of the unit has the SilverStone logo stamped in it. Here we can also see the semi-gloss black finish on the ST75F-GS. 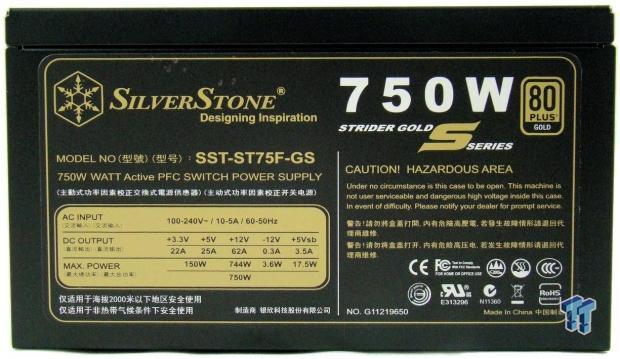 The I/O specification label can be found on this side of the unit. The other side is simply black without a logo. 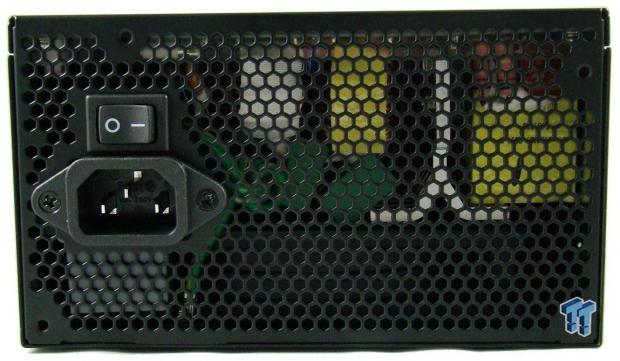 Standard honeycomb mesh can be found on the back of the unit to provide ventilation. Also present are the AC input and on/off rocker switch. 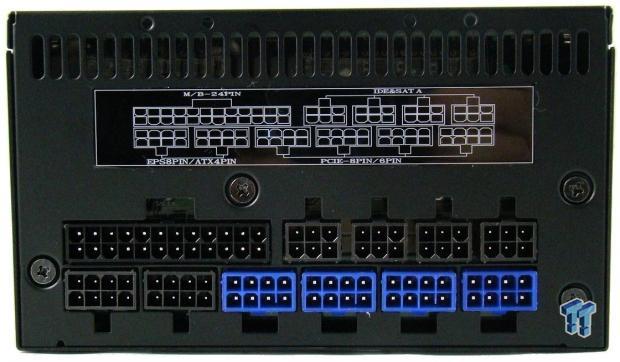 Spinning around to the front, we can see all of the modular connections. They are labelled via the label and you can quickly differentiate the PCI-E connectors as they are blue. The cables have matching blue ends so that there is no confusion. 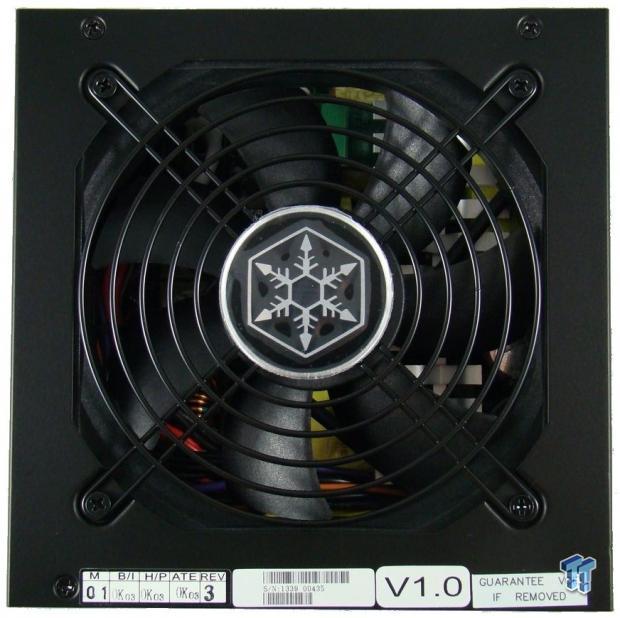 SilverStone keeps it simple with the fan and grill on the bottom of the unit. Aside from the SilverStone logo in the center, we find the standard wire grill that we've seen covering computer fans for the last twenty years. 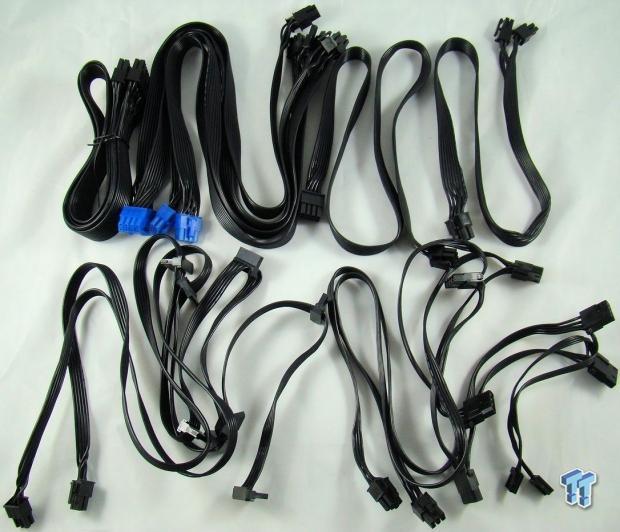 All cables for the ST75F-GS are of the flat ribbon type and black in color. 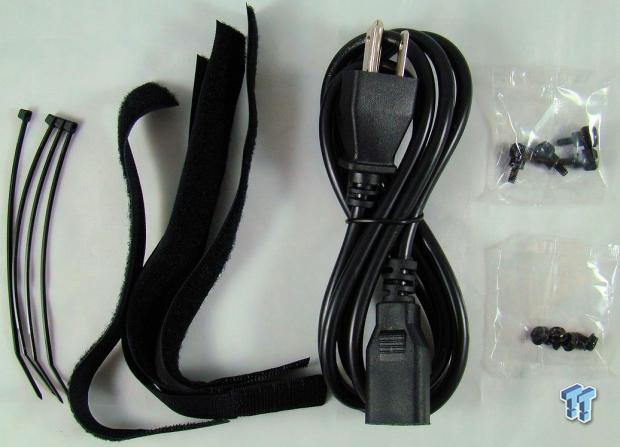 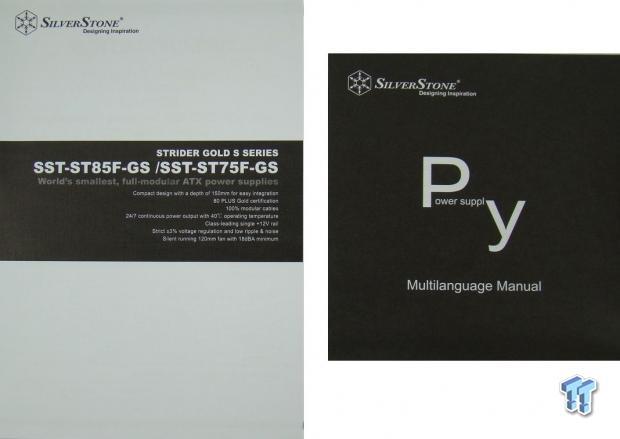 Finally, we have the user's manual and specification manual.

SilverStone does a decent job providing cables for the ST75F-GS. There are four PCI-E connections and two EPS12V/ATX 4+4 connectors which will cover a majority of applications that this power supply will ever see. Peripherals are handled via four cables which provide a total of eight SATA, six Molex, and two FDD connectors.

I think it is time that we stop finding FDD connectors as part of a power supply. I've not seen a need for a floppy for years, and there are no reasons that a Molex to FDD connector cannot be included to cover any need for one for any legacy application. 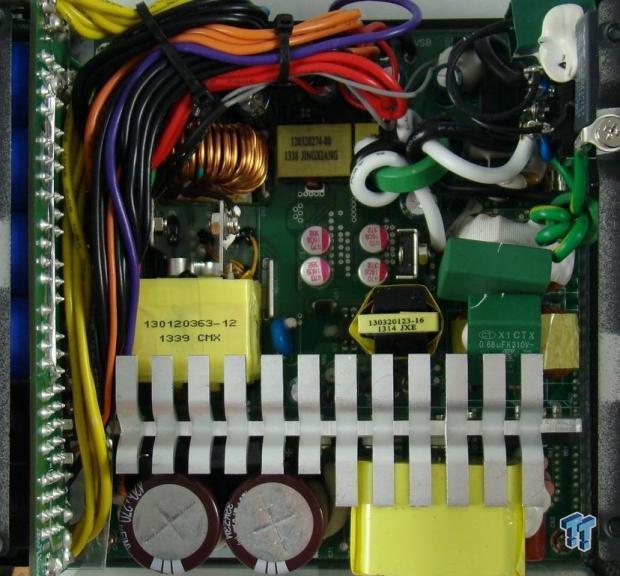 Right away, you can see that this power supply is of older design and it has been retrofitted with a daughterboard for the modular connectors. That's not to say that it doesn't feature any newer technology, though, as it certainly does. The single heat sink, along with reduced component count help keep the unit cool as fresh air is able to reach all the way to the PCB without obstruction. 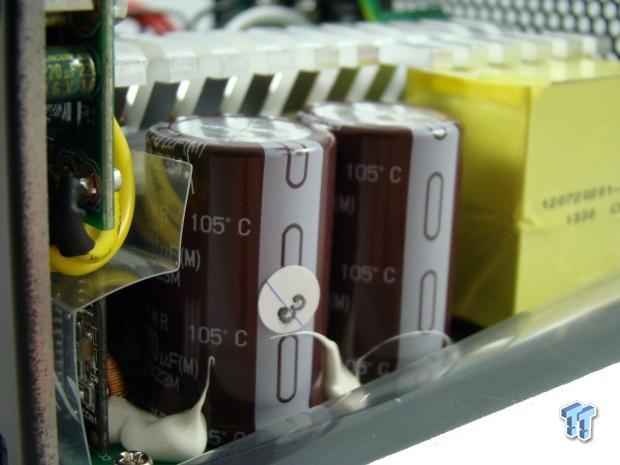 High quality Nippon Chemi-Con capacitors can be found on the primary side of the ST75F-GS. 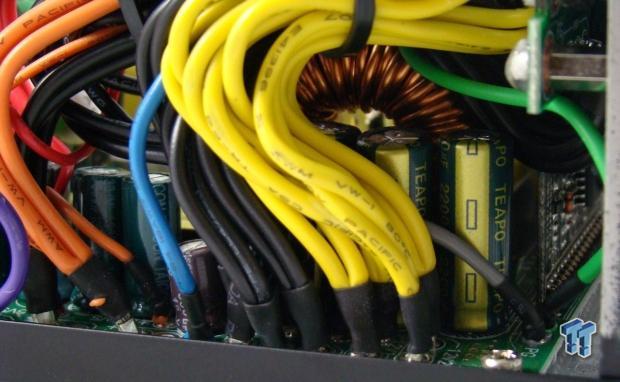 The secondary side of the unit is littered with Taicon, Teapo, and Nippon Chemi-Con capacitors. Every time that we see Taicon and Teapo caps, the DC output quality of the unit suffers. I bet that this unit will be no different. 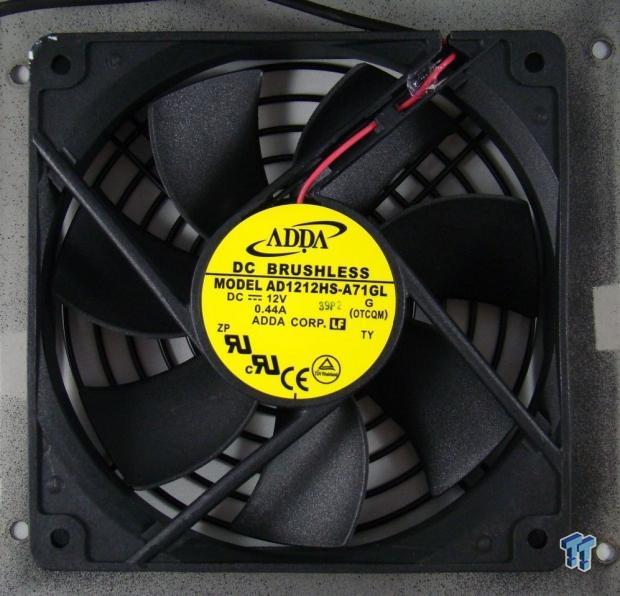 SilverStone uses the ADDA AD1212HS-A71GL 120mm fan to provide the active cooling for the ST75F-GS.

The tests performed are based around six conceivable setups that are out there, and progressively load down the PSU up to the power supply's limits, or 1000W; whichever comes first. Since our test equipment's limits are lower than that of the SilverStone ST75F-GS 750W power supply, we can test it to its maximum.

DC Output quality for the SilverStone ST75F-GS was okay, and well within specifications. During Test One, we saw 21mV of noise on our scope at 22% load. When we increased the loads in Test Two, the ripple climbed to 29 mV at around 43% load. Increasing loads even further showed that the noise on the 12V rail climbed to 54mV at 750W.

As I stated at the beginning of this review, SilverStone is almost like a household name to us. We look forward to seeing all of their products and what they have to offer, especially their power supplies. The big draw about the Strider Gold S series is that it intends to provide everything that we've come to expect out of SilverStone in a power supply, just in a smaller shell. Smaller is almost always better these days as it generally means lighter, cooler, and more compatible.

On paper, that is exactly what we get. A smaller power supply with the same qualities of their longer Strider Gold series. If we go back and compare it to the Strider Gold Evolution 850W, we can see the results just aren't quite the same. I'll break the performance down in three areas as always, but this time I'll reference the ST85F-G Evolution in comparison.

Voltage regulation is just as SilverStone claims. The 12V and 3.3V rails were both within 3% and the 5V rail was within 2% of ATX specifications for the ST75F-GS. This is just as SilverStone claims, but the ST85F-G Evolution had both the 5V and 3.3V rails within 1% and the 12V rail just barely pushed into the 2% area. It feels like we're taking a small step backwards, instead of a small one forward. The DC output quality is of the same boat. Both units start around 20mV with the ST75F-GS creeping up to a maximum of 54mV. The ST85F-G Evolution only showed a maximum of 45mV of noise, but yet, has 100W more power going out. Again, it feels like a small step back.

Finally, we have efficiency. Taking a look at the numbers, it is clear that the ST75F-GS is within the range of what is required for the 80 PLUS Gold certification, even though it is nearing the minimum limit towards the end. Again, if we look back at the ST85F-G Evolution, we see that it simply wasn't cutting things as close as could be and simply gave you something more.

I can't help but feel that the ST75F-GS rides on the success of the Strider Gold series name to drive sales. That doesn't mean that this is a bad unit because it most certainly is not. It just feels like it doesn't belong as a member of the Strider Gold series as that has been a true quality unit that has been trusted by many throughout the years.

Instead, this is more of an entry-level unit. That is clearly reflected by the short three-year warranty that SilverStone gives it and the $135 price tag that puts it right in the middle of the market with no clear way to differentiate it from the rest of the units on the market. That leaves the ST75F-GS as an average unit that gives you no real reason to purchase it other than it fits the budget and carries the SilverStone logo.

The Bottom Line: While the ST75F-GS is a good entry-level unit, there is no compelling reason to recommend it over other options on the market. It fails to differentiate itself from the pack in price, features, and performance.