The Addonics Sapphire platform is one of the most versatile we have seen come through the lab here at TweakTown. With is modular design, we have a number of products including both the Snap-In Array and Write Protect, and today we add yet another solution, the Sapphire Combo Blu-ray.

The Sapphire SBDRHEU Blu-ray Combo is yet another unique solution from Addonics enabling users to install both a 3.5" hard disk in addition to Blu-ray capabilities with the installed slimline optical drive. Additional drive support can be added to this solution with an optional 2.5" adapter, users can also add 256-bit hardware encryption if needed with the Cipher USB adapter. Specs for the Blu-ray drive include a 24x CD read speed, while DVDs are supported up to 8x for both single and double layer media, Blu-ray disc support allows for a 4.8x read speed. If you plan on writing media with this drive, you will find the maximum write speed with CD media tops out at 16x, while DVD single layer media is listed at 8x and double layer stops at 4x.

Connectivity options for this solution include eSATA and USB 3.0, while operating system support goes back to Windows XP through Windows 8 along with OS X and Linux kernel 2.4+. MSRP of the Addonics Sapphire Blu-ray combo is listed at $269.99 with a one-year warranty. 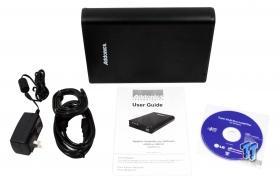 Scope of delivery for the Sapphire Blu-ray includes the power adapter, data cables, and software for the Blu-ray drive.

The front of the enclosure houses the Blu-ray drive at the top, while the 3.5" drive tray slides out underneath. To the right, we have a large LED to denote power, and to the left, we have two small LEDs for activity on each disk.

Above, we have an image of our 4TB Western Digital Red Pro that we used for testing. 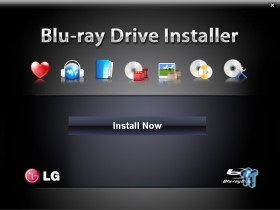 As with most optical solutions purchase these days, the LG CT40N used in the Addonics comes with value added software to enrich your experience with the drive. 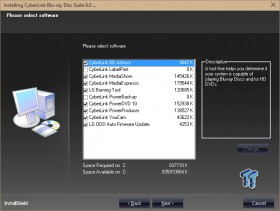 Above, we have a list of what comes on the software disc. As you can see, we have a full suite from CyberLink including Media Espresso and PowerDVD 10. 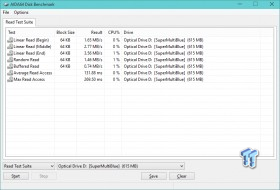 To start testing, we put a standard CD in the Blu-ray drive. Using the AIDA64 disk benchmark suite, we came up with a peak speed of 3.56 MB/s during linear read testing. Average read access came in at 131 ms, while maximum was much higher at 269 ms. 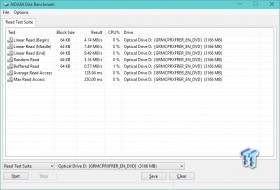 Moving over to DVD performance, we found peak read speeds during linear testing to reach 9.49 MB/s, while average access hovered around 128 ms. 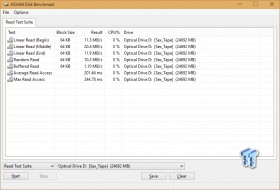 Blu-ray, as expected, was a little quicker. Peak read speed came in at 20.4 MB/s with 201 ms average read access. 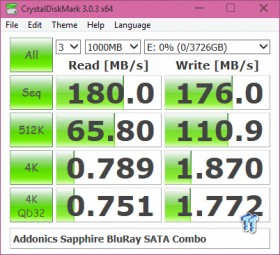 Moving on from the optical disk testing, we ran our WD Red Pro HDD through testing and came up with 180 MB/s read with 176 MB/s write via USB 3.0. 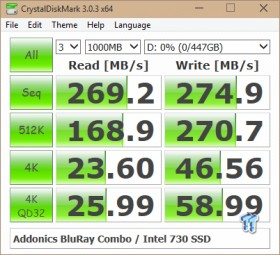 Of course, we didn't stop with testing this solution with a hard drive, we had to toss in our Intel 730 SSD and give it a run as well. This allows us to see the absolute peak of the enclosure to make sure there are no bottlenecks that would be experienced. Peak read speed came in at 269 MB/s, while write performance topped at 274 MB/s.

Like many of the Addonics solutions that come through the lab, the Sapphire Blu-ray certainly has its market. The build quality is superb with its alloy shell adding both durability and aesthetic appeal to the unit, while the plastics that accompany the unit seem to be up to the task as well. The mechanics that are present in both the hinges of the front tray feel very tight and at the same time are linked to allow easy ejection of any drive installed.

Performance of the solution was good, but could have been better. We were able to reach a peak of 269 MB/s read and 274 MB/s write with our Intel SSD, which does give the unit plenty of performance for it intended use. The Blu-ray drive was certainly a great addition to the overall package, but like most slim drives, it does get a little noisy while in operation.

Overall, with the value added software and the great build quality of the Sapphire Blu-ray combo, Addonics has a well-rounded product with plug and play capabilities fit for the average consumer.