Storage enclosures in this day and age are a dime a dozen. We have nearly every major vendor carrying some sort of offering and when it comes right down to it, the enclosure you choose will largely depend on your budget and the performance you are looking to achieve. Today, we look at an enclosure for the budget conscience, the Inateck FE2006.

The FE2006 on the outside is a rather simple storage solution that offers both drive protection through the use of ABS plastics and USB 3.0 connectivity to any 2.5" SATA drive. The enclosure carries a rather fitting footprint of 130mm x 82mm with a height of just 14mm. Internally, this enclosure does set itself apart as the first enclosure we have knowingly tested with the JMicron JMS567 chipset that promises top notch USB 3.0 performance and a built-in automatic sleep function that powers drives down after a 30 minute period.

Compatibility extends to modern Windows operating systems and Mac OS. MSRP of the Inateck FE2006 is listed at $29.99 with a one-year warranty. 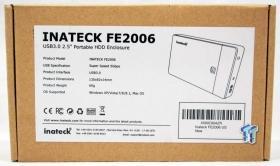 Packaging for the FE2006 is a rather simple brown box with label giving specifications. 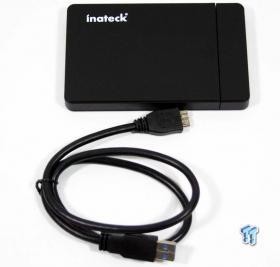 Scope of delivery for the Inateck FE2006 includes the enclosure and USB 3.0 cable. 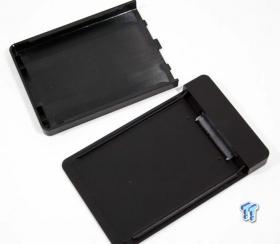 Internally, the Inateck is a rather simple solution. Being a tool less solution, you can simply slide your drive in and place the top cover back on.

The edge of the enclosure carries both the USB 3.0 connection, along with an additional power input if needed. The activity light in the center serves a dual purpose as the automatic sleep indicator, where it will blink three times to let you know the drive has entered sleep.

Above, we have installed an Intel 730 SSD into our sample for testing. 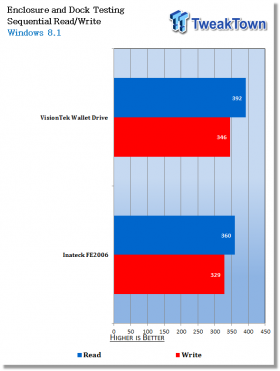 In our first chart above, we have the results from our testing within Windows 8.1. The Inateck did quite good here with read results coming in at 360 MB/s, while writes touched 329 MB/s. 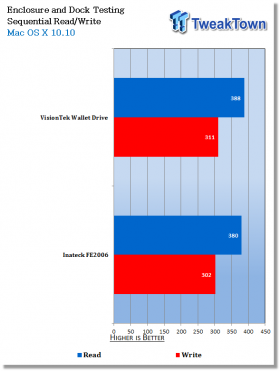 Next, we moved over to our MacBook Pro with OS X 10.10 and ran through sequential testing. Rather surprisingly, the Inateck gained a bit more performance and was able to reach 380 MB/s read and 302 MB/s write.

The FE2006 is a rather well built storage enclosure that has a decent amount of flex with the plastics used. Being tool less, drive installation is quite simple, and reinstalling the top cover went on without any issues.

Not everything is perfect with this enclosure, as I found out after trying a few different drives. The main issue I have with this enclosure is that it doesn't hold the drive securely. After installing our SSD in the enclosure, with the included piece of headliner foam, we still had a noticeable rattle when moving the drive around. Even moving over to a 9mm thick HDD, we had a noticeable amount of play between the top of our drive and the enclosure. This leaves me to believe that the piece of foam included to use as a filler isn't dense enough to hold a drive securely, nor is it thick enough to snug up against a 7mm drive.

Overall, as a budget solution, the FE2006 fits quite well for those wanting to revive a 2.5" HDD that has been sitting idle. The performance is ample enough for most users, as long as you can overlook the problem with securing the drive.

PRICING: You can find the Inateck FE2006 2.5" USB 3.0 Storage Enclosure for sale below. The prices listed are valid at the time of writing but can change at any time. Click the link to see the very latest pricing for the best deal.

The Bottom Line: Inateck's FE2006 is a solid storage enclosure for those wanting something budget friendly, easy to use, and with ample performance. However, Inateck could have increased the value of this solution by offering a better method of securing your drive.