In 1994, former In Living Color and stand-up comedian Jim Carrey burst out of the gate in Ace Ventura: Pet Detective, a fresh and hilariously manic and over the top talent, before solidifying his popularity in the Dark Horse graphic novel adaptation The Mask, and politically incorrect comedy 'Dumb and Dumber'. With these three roles, it was clear Carrey was Hollywood's 'next best thing', and the following year saw him return to the role of Ace Ventura, in the ill-advised sequel When Nature Calls, which swore him from sequels for two decades. In 2014, Dumb and Dumber is back, but can lightning strike twice? 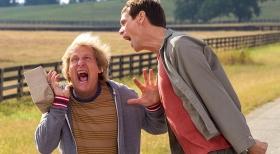 Twenty years from the conclusion of Dumb and Dumber, Lloyd (Jim Carrey) has been admitted to a mental institution and rendered mute by the emotional trauma of the romance with Mary Swanson that could never be. Harry (Jeff Daniels) has dutifully remained by his side, visiting him daily and even changing his adult diapers.

When Lloyd revealing his ploy was simply a long gestating joke, Lloyd and Harry resume their mundane existence until Harry is contacted by his former girlfriend Fraida Felcher (Kathleen Turner) who reveals that he has a long lost daughter. The duo decide to rekindle contact with Fraida and track down Penny (Rachel Melvin) the missing link in the family. 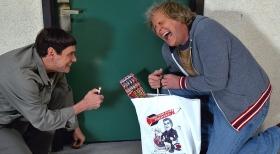 In mid-2013, with a completed script, signatures from Jim Carrey, Jeff Daniels and the Farrelly brothers, and a very economical projected budget of $35 million, rights holder Warner Bros and New Line strangely decided to put the long in the making sequel to Dumb and Dumber into turnaround - meaning that the filmmakers were free to ship the project around to competing studios. Surely, a sequel to the pop culture classic was a sure thing, especially with the original stars and director on board. Well, I guess they took a look at the film's script.

With six credited writers, there's just no excuse for the dire shape of the script, which only manages to elicit a moderate amount of laughs - far from the rollicking original. Worse, the film is unnecessarily packed full of homages and 'tributes' (read: copies) of jokes and scenarios from the first, which invariably fall flat on their face, or worse - come off as downright embarrassing. For a film that's been in and out of production hell for two decades, fans deserve a hell of a lot more than this. 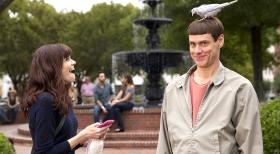 There's certainly nothing wrong with the performances of Carrey and Daniels, who do the best they can with the puerile material, and whilst they've aged a little less flawlessly than, say, Tom Cruise, they do look pretty much the way we remember them, even if it was a 20 years ago. Rachel Melvin as the sweet but damaged daughter Penny, is a breath of fresh air in an otherwise stale adventure, imbuing her role with equal parts convincing naivety and charm.

At the end of the day, Dumb and Dumber To is a film that unashamedly banks on nostalgia, wearing it as a badge of honor - even down to the snippets from the original film, which roll during the end credits. The trouble is, their audience is different than it was back in the day. Original fans have 'evolved', having been exposed to similar humor in the intervening years, whilst new, younger audiences have decidedly different comedic sensibilities and expectations. Unfortunately for the Farrelly brothers, rehashing the same tired old jokes just doesn't cut it. 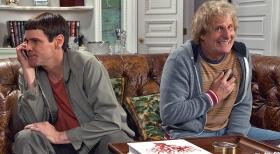 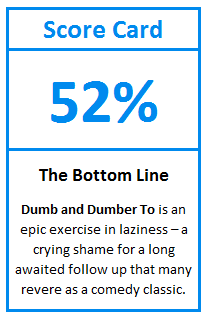