It has certainly been awhile since we have had a two-bay NAS come through the lab here at TweakTown, with our last unit being the MyCloud EX II from WD.

Two-bay units like the Seagate NAS are typically targeted towards consumers wanting a simple network storage solution where they can store their photos, videos and music, and possibly access it via cloud infrastructure.

The latest lineup of NAS appliances from Seagate comes from the acquisition of LaCie. Built upon the Marvell Armada 370 platform, the two-bay unit we have in for review today adds to that with 512MB of DDR3, two USB 3.0 ports and a single gigabit Ethernet port.

New to the Seagate NAS lineup is the introduction of NAS OS 4, another product coming from the LaCie division, albeit reconfigured to fit the latest products. RAID modes included in the Seagate NAS include 0 and 1, and optionally if you so choose, you can enable SimplyRAID, which detects the disks installed and configures them in the most efficient manner, though it does carry a unique feature where it can handle disks of different capacity's similar to the way Drobo works with BeyondRAID.

Let's carry on now and take a close look at the unit. 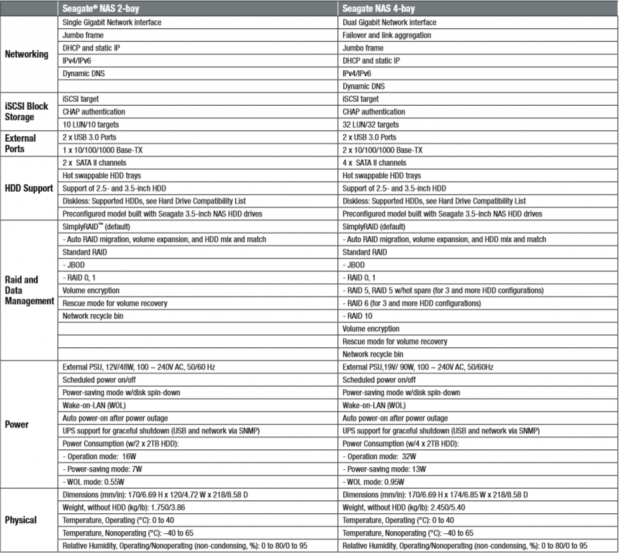 PRICING: You can find the Seagate NAS 2-Bay 4TB Network Attached Storage Drive for sale below. The prices listed are valid at the time of writing but can change at any time. Click the link to see the very latest pricing for the best deal. 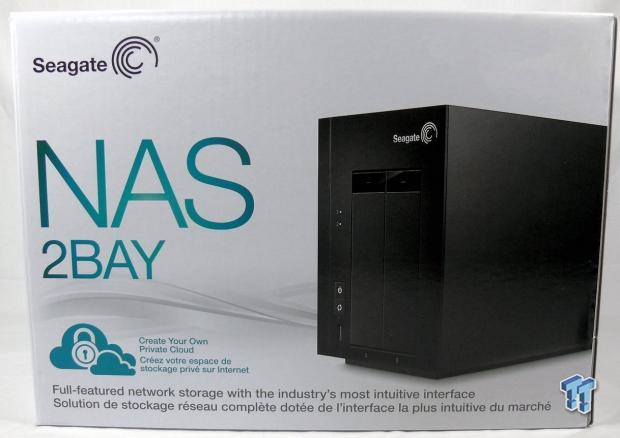 Packaging for the Seagate NAS is rather simple and carries an image of the NAS on the front with little marketing information. 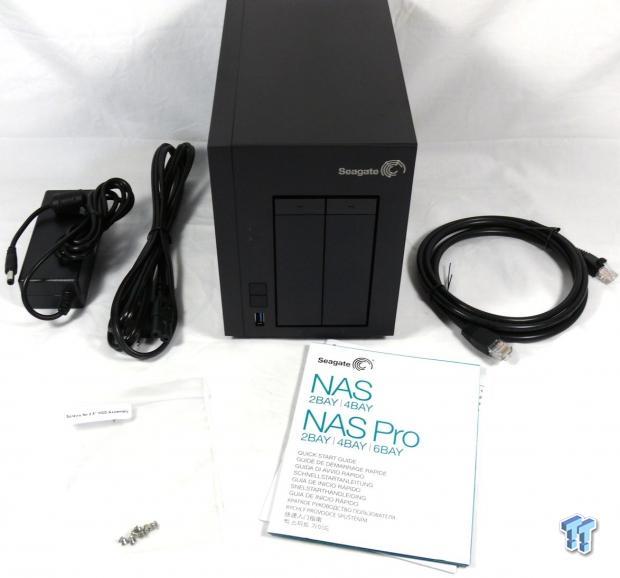 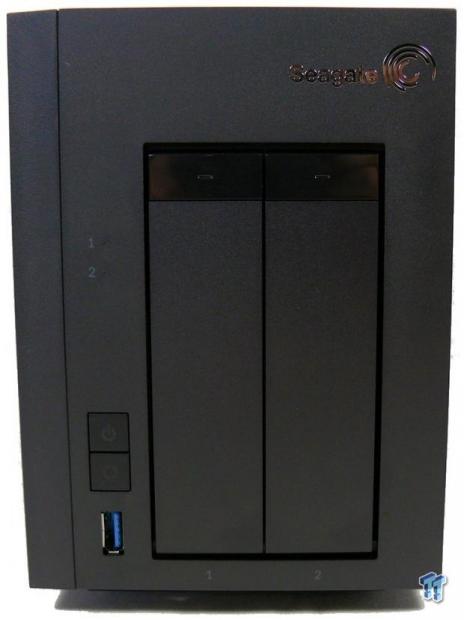 Aesthetically, the Seagate is rather elegant looking. We have a nice black finish with a Seagate logo in chrome up top. To the left, there is a USB 3.0 port for easy accessibility, along with the power button above. 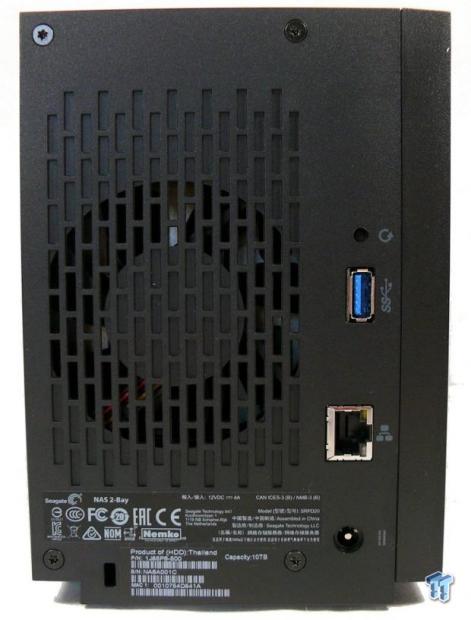 The back of the NAS houses the single gigabit Ethernet port, along with a USB 3.0 port. Additionally, we have an 80mm cooling fan to keep the internal drives cool.

Our Consumer NAS test 'system' is setup similar to what you have at home. Here we have the base of a GIGABYTE Z97X UD7 TH, housing an Intel Core i7 4770 with 16GB of RAM supporting. Our Operating System of choice is Windows 8 x64 Enterprise, with all available updates and patches installed on a pair of Samsung 840 SSDs.

On the networking side, we utilized the Intel PRO1000 PT Server Adapter with a direct connection to each NAS appliance. This eliminates the need for a switch, and any bottlenecks that may occur. 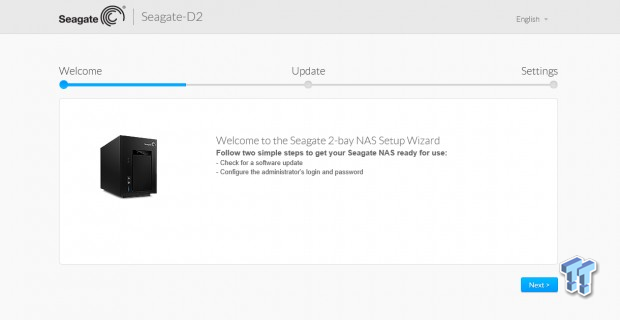 Setting up the Seagate NAS started with the NAS OS 4 wizard.

After we were done with setup, I was surprised to see how clean the Web GUI was for the Seagate NAS. As you can see above, we have fairly modern icons on a white background each pointing to a separate menu. 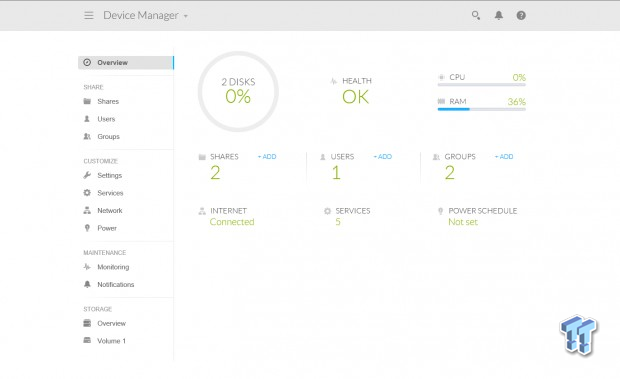 Here we have the system overview window. This section too carries a clean appearance, while giving you all the information you need to know about your NAS on one page. 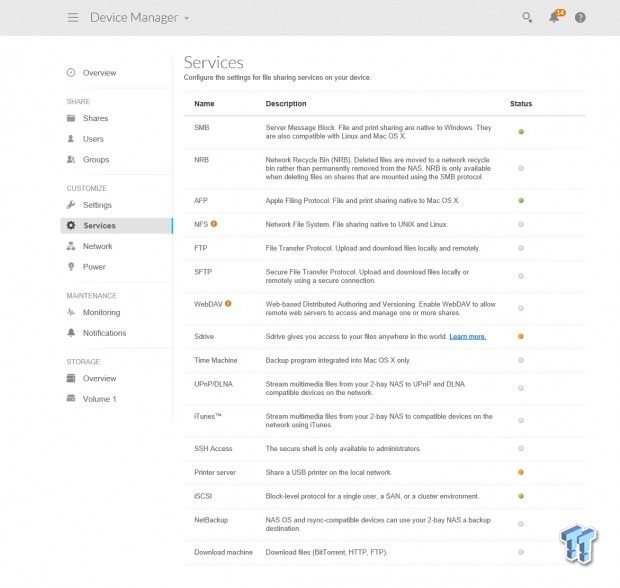 Here we take a look at the services menu where we find the Seagate NAS does have access to SMB, AFP and FTP, along with iSCSI, which we normally don't see on consumer two-bay solutions. 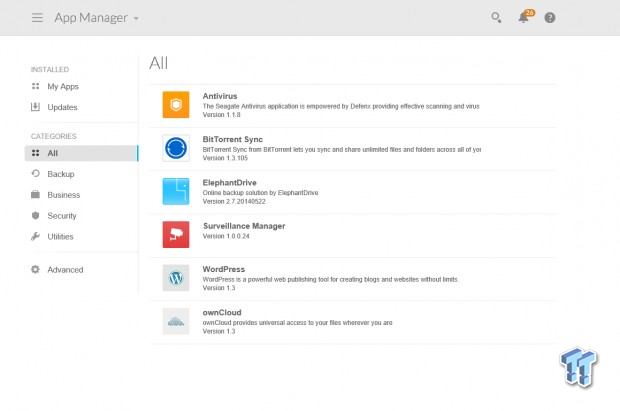 When we went through the Apps for the Seagate NAS, I was quite surprised to see so few available. In total there were just these six. 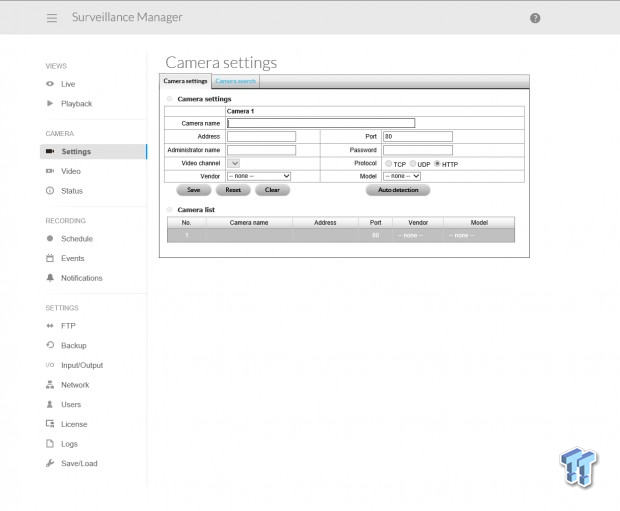 One app I did want to play with was the surveillance manager. As you can see, it only gives you a single camera license by default. 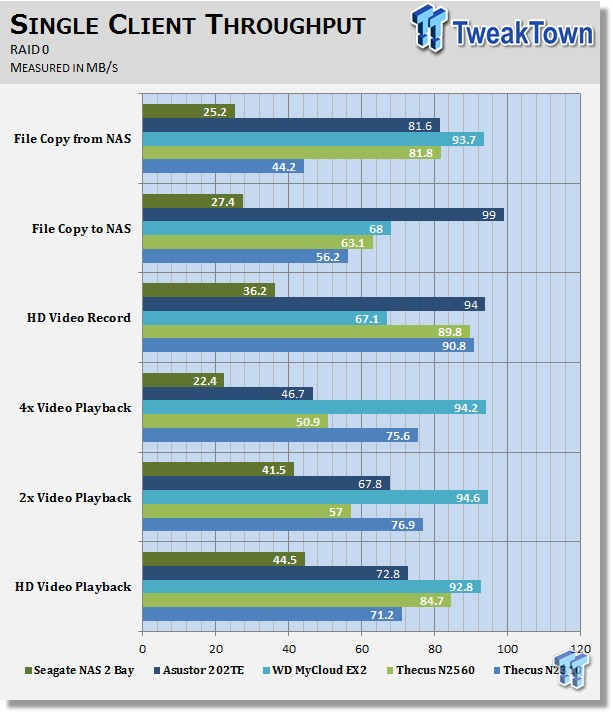 Starting off with RAID 0, we found the Seagate NAS struggling with our single client testing. Here the NAS peaked at 44.5 MB/s in HD Playback. 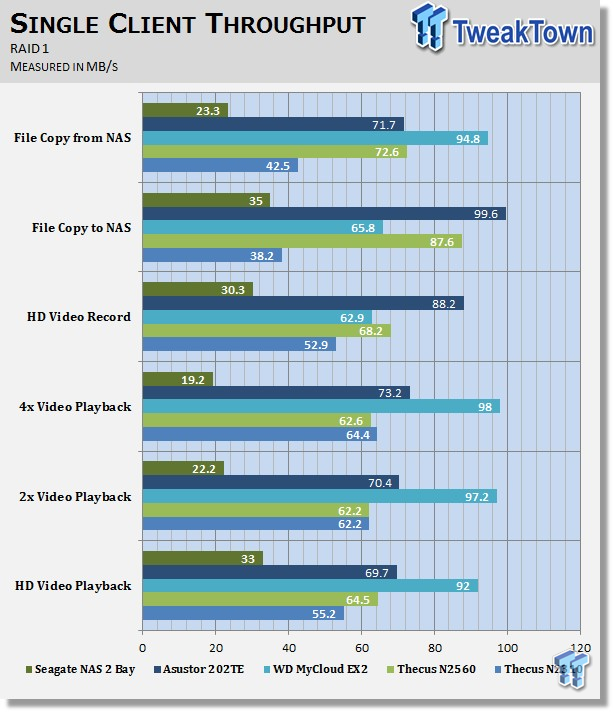 RAID 1 results struggled a bit as well, here we have the Seagate NAS producing at peak 35 MB/s during file copy operations.

Our Sequential read/write workload is centered on 1MB transfer sizes; again, with sixteen threads, and a Queue Depth of 8. 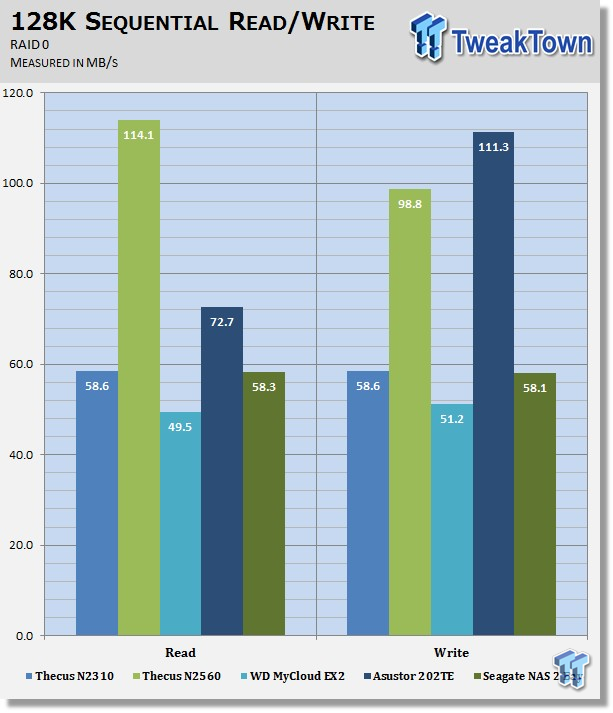 Sequential results in RAID 0 showed the Seagate NAS to compete with the Thecus N2310 and surpass the MyCloud EX II. 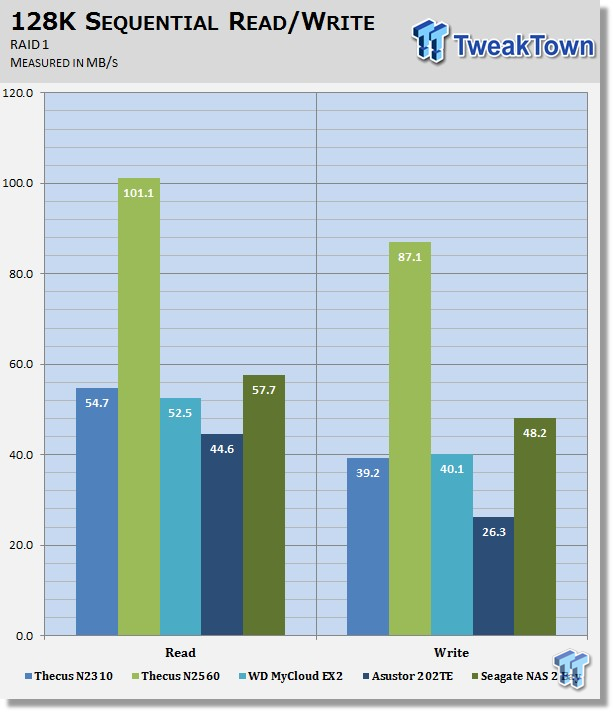 Moving to RAID 1, the Seagate NAS took the second spot only to the N2560 from Thecus. Here we saw reads come in at 57 MB/s, while writes topped 48 MB/s. 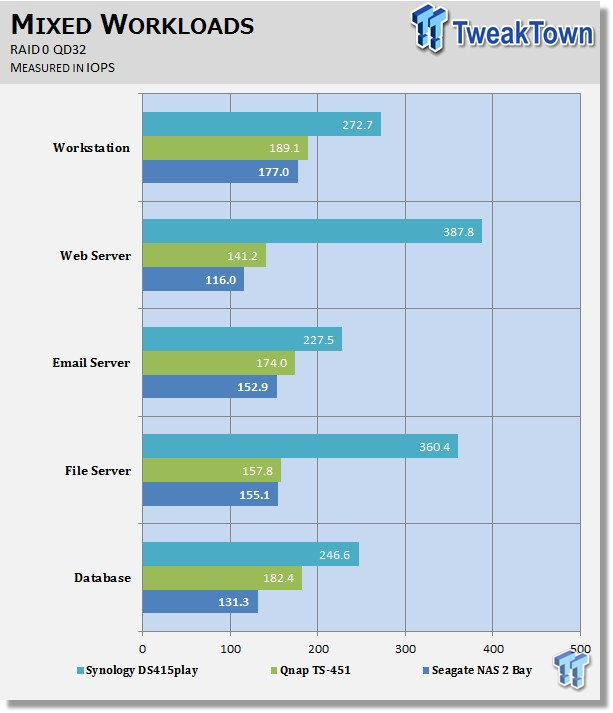 Mixed workloads showed the Seagate NAS doing quite well - I was actually surprised to see it perform similar to the QNAP TS-451. 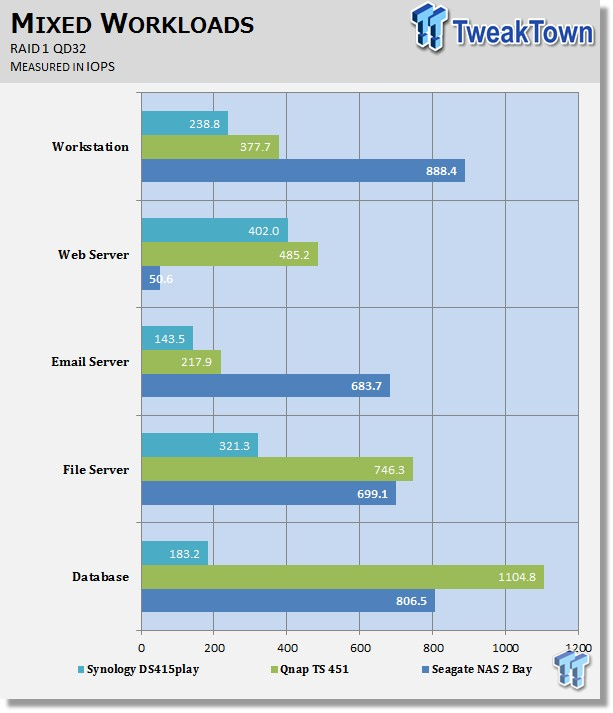 Moving to RAID 1, the Seagate NAS actually outperformed the 451 and DS415play in the workstation workload test. 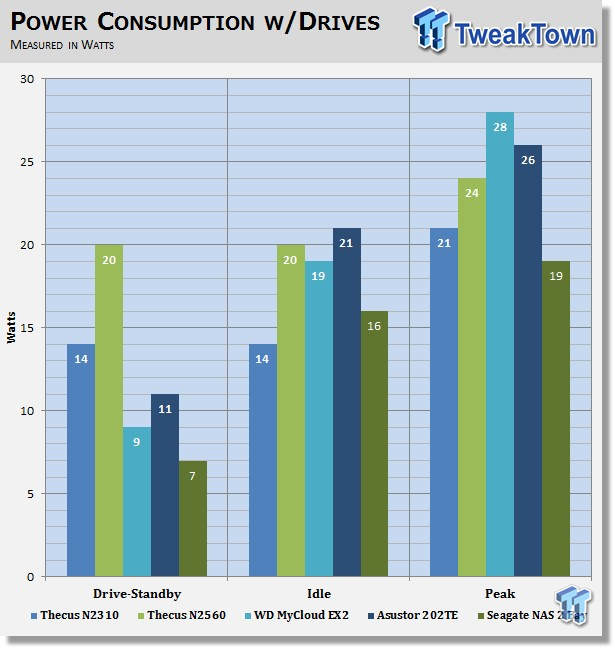 The Seagate NAS, while being an aesthetically appealing NAS solution, does sacrifice a slight amount of performance. As we found in our single client testing, the NAS just didn't respond as I hoped it would.

However, when we moved on to sequential read and writes, the NAS performance picked up quite a bit and actually outpaced the MyCloud EX II and the N2310 from Thecus. Another area the Seagate NAS did quite well was power consumption with our chart above.

Build quality is much improved and the unit actually reminds me of the quality I'm used to seeing from LaCie, albeit in plastic form. The drive trays allow easy installation of drives, and slide back in without catching or having to be forced back in the unit. The fan noise is minimal and seems to keep the unit rather cool, even with large capacity drives installed.

Overall, the Seagate NAS is a great solution if you're looking for something straight forward and easy to use.

PRICING: You can find the Seagate NAS 2-Bay 4TB Network Attached Storage Drive for sale below. The prices listed are valid at the time of writing but can change at any time. Click the link to see the very latest pricing for the best deal.

Bottom Line With the Seagate NAS in its two-bay diskless form being offered at an MSRP of $169.99, I don't think there is a better choice for a simple and easy to use NAS solution on the market.