It's easy to dismiss Into the Storm as just an artistically-deprived updated version of the 1996 disaster film Twister, but that comparison does no service to either films. Besides, that film was released 18 years ago - entire franchises have lived, died and been rebooted in shorter periods. Into the Storm isn't just about updated visual effects, it attempts to update the story to be more relevant for today's always connected, YouTube centric audiences. But does that mean it's a necessarily better film? Read on. 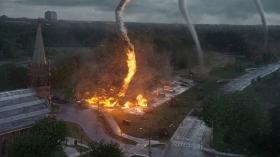 In small town Silverton, Oklahoma, a once in a generation storm is brewing, bringing single minded storm chaser Pete (Matt Walsh) and his team of videographers Jacob (Jeremy Sumpter) and Darryl (Arlen Escarpeta) and meteorologist Allison (Sarah Wayne Callies) to town. However, their preparedness, including their fully kitted out, tank-like vehicle, is at sheer odds with the town that will soon be pummeled by violent weather patterns.

When the storm cell forms directly in the path of a school leaving ceremony, Pete must decide to either put aside his own aims, or join with school vice Principal Gary Fuller (Richard Armitage) and assist the civilian population. 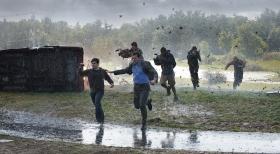 Despite their impressiveness in the day, computer graphics circa 1996 were only just beginning to come into their own, with pioneering titles such as Jurassic Park only three years old. As such, Twister's visual effects look kind of hokey today, with the digital seams obvious to even the most casual of viewers.

Conversely (and despite a very low budget of $50 million), Into the Storm's CG effects sequences are undoubtedly spectacular and utterly convincing, and for good measure too, for they undoubtedly serve as the film's raison d'être. 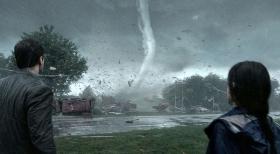 Director Steven Quale isn't a well known quantity, but he's had a hand in a surprising amount of well-made films, mostly thanks to his friendship and long running professional relationship with the legendarily demanding James Cameron, which saw Quale work as assistant director on Avatar and Titanic, and a production assistant on Terminator 2, True Lies and The Abyss. He also directed 2011's unmemorable Final Destination 5, proving that he's more adept at crafting great visual effects sequences. Unfortunately, he hasn't picked up Cameron's penchant for creating memorable characters or scripting.

Mercifully, the 90 minute run time of Into the Storm means that it's all over reasonably quickly, but the format, which alternates between 'found footage' and traditional storytelling gets tiresome quickly. Exceedingly dumb too is the southern hick comedy relief duo, which doesn't provide comedy - only serving to grate. 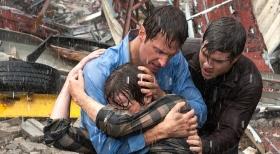 It's not that Into the Storm is rubbish; the stunning visual effects are, well, stunning. But short of that, there is simply no compelling reason why the film should exist. Now, if someone would just remake Twister... 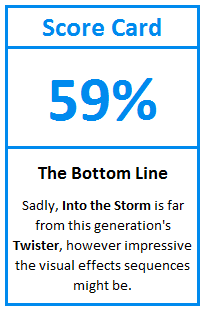