LUXA2 is quickly becoming a force to be reckoned with in the mobile audio world, with its latest GroovyW Bluetooth Speaker with Wireless Charging Station being another notch in that dominating belt. 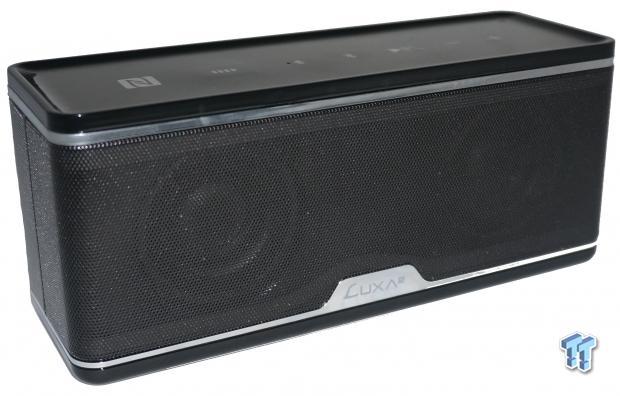 The company has quite a few products in its lineup now, ranging from smaller speakers to wireless-powered speakers, something that we have here today in the GroovyW Bluetooth Speaker with Wireless Charging Station.

Instead of providing some pictures, we've done an unboxing video using Google Glass. You can take a look at that below, but if you don't want to watch the video, we'll tell you what you get in the box below the video itself.

In the box, we have the GroovyW speaker itself, the Wireless Charging Station, a carrying pouch, a microUSB cable, auxiliary cable, and the user manual.

LUXA2 has provided some serious specs in the GroovyW Bluetooth Speaker with Wireless Charging Station, something you can take a closer look at below. 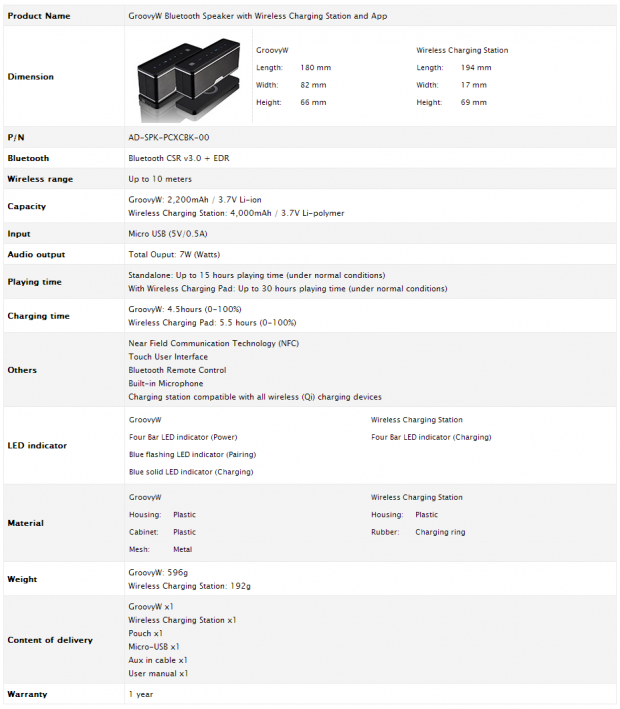 The wireless range is not bad at all, rated at 10m (or 32 feet). The GroovyW speaker features NFC technology, a great touch interface, a built-in microphone and Bluetooth-powered remote control. When it comes to the weight of the two devices, the GroovyW speaker weighs in at a respectable but hefty 596g (or 1.3 lbs), where the Wireless Charging Station weighs 192g (or 0.42 lbs).

PRICING: You can find the LUXA2 GroovyW Bluetooth Speaker with Wireless Charging Station for sale below. The prices listed are valid at the time of writing but can change at any time. Click the link to see the very latest pricing for the best deal.

A Closer Look, Standout Features & How It Sounds

Now we're going to take a tour around the GroovyW Bluetooth Speaker, moving from the front to back.

Starting at the front, we have the LUXA2 branding down the bottom on the silver trim. There's an overall black and silver look to the GroovyW speaker, something I really loved.

Spinning it around, on the back we have the power button, microUSB port for charging, and a 3.5mm jack for plugging in your audio device, such as your smartphone, tablet, or iPod.

On the bottom of the GroovyW speaker we have some information: the Product No., Input, and Capacity. The round part is what docks to the Wireless Charging Station, something we're going to take a look at soon. Up top, we have a bunch of buttons and features. From left to right, we have the NFC part of the GroovyW, this is where you would tap your smartphone. Then we have the battery meter, microphone, Bluetooth light to see if it's enabled or disabled, play/pause for music and phone calls, and then some volume buttons.

Moving onto the Wireless Charging Station, something that is quite simple. We have some LUXA2 branding on top of the Qi-powered charging circle.

Laying it down for use, to the far right we have a power button. On the side of the Wireless Charging Station, we have a full-sized USB port, a microUSB port where you can plug in an external charger, and battery meter above it. 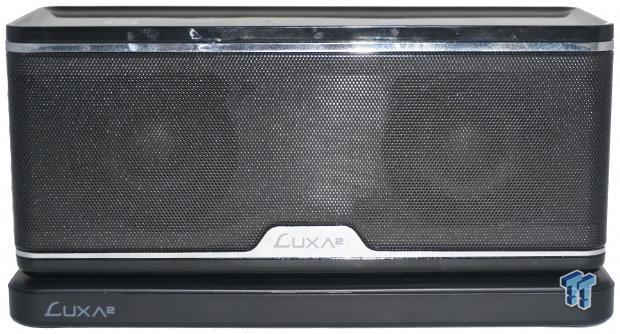 Together, they make quite a good looking couple, wouldn't you agree? 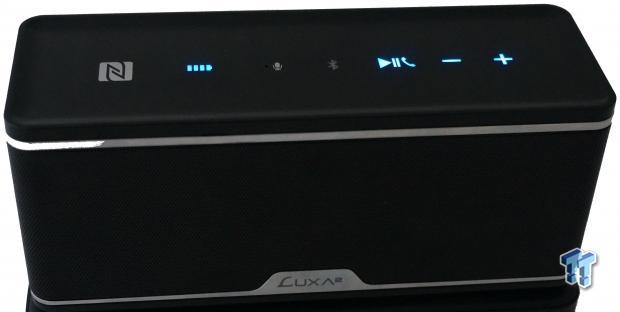 The black-and-silver theme looks great with the blue lights that LUXA2 has baked into the top of the GroovyW speaker, something that looks spectacular in a dark environment. 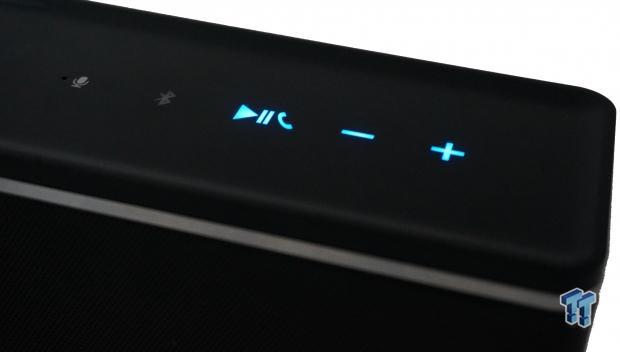 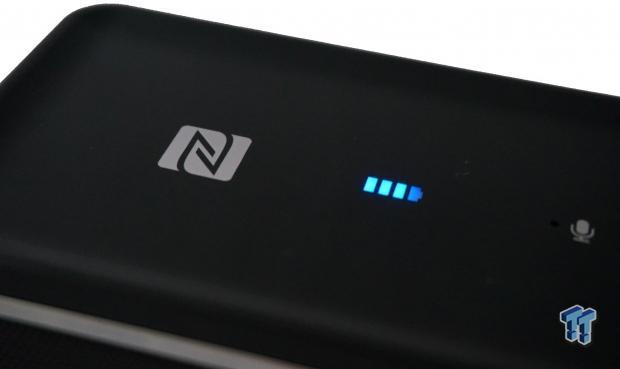 This continues, with some close up shots of the beautiful lights on the GroovyW speaker.

When it comes to features standing out on the GroovyW Bluetooth Speaker with Wireless Charging Station, it has a few. For one, it has NFC technology, which allows you to simply place your NFC-powered smartphone next to the NFC part of the GroovyW speaker (in the image above), which will sync your devices together. The touch buttons placed across the GroovyW speaker are also great, something you don't see much of on mobile speakers and audio products.

The biggest feature that makes LUXA2's product stand out from the rest would have to be, for me at least, the Wireless Charging Station. Not only does this charge up the GroovyW, but you can lift the GroovyW speaker off when it's charged and get some juice pumped into your Qi-compatible smartphone or tablet.

I actually did this a couple of times during my testing, where I would charge up the GroovyW speaker until it hit 100%, then I would move it to another spot with the music still playing, and then dock my Nexus 5 smartphone onto the Wireless Charging Station to get the battery on my N5 charged up.

LUXA2 has made a new Audio Center app, something that I gave a quick spin with the GroovyW speaker. I installed it onto my Samsung Galaxy S5 smartphone to play around with. 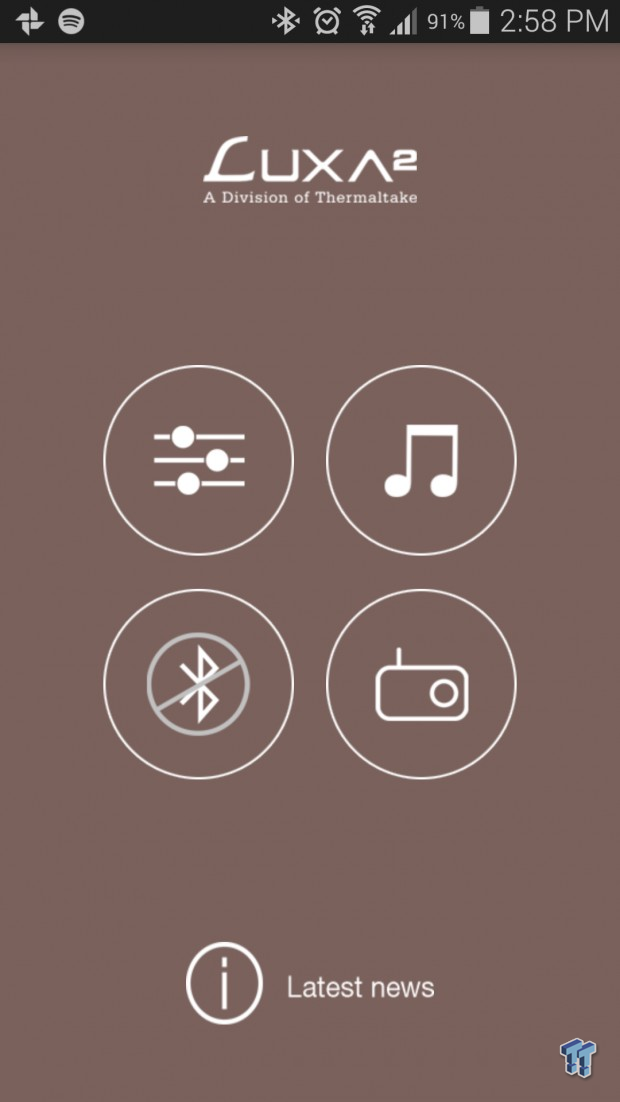 Starting with the home screen to the app, we have four option to choose from. 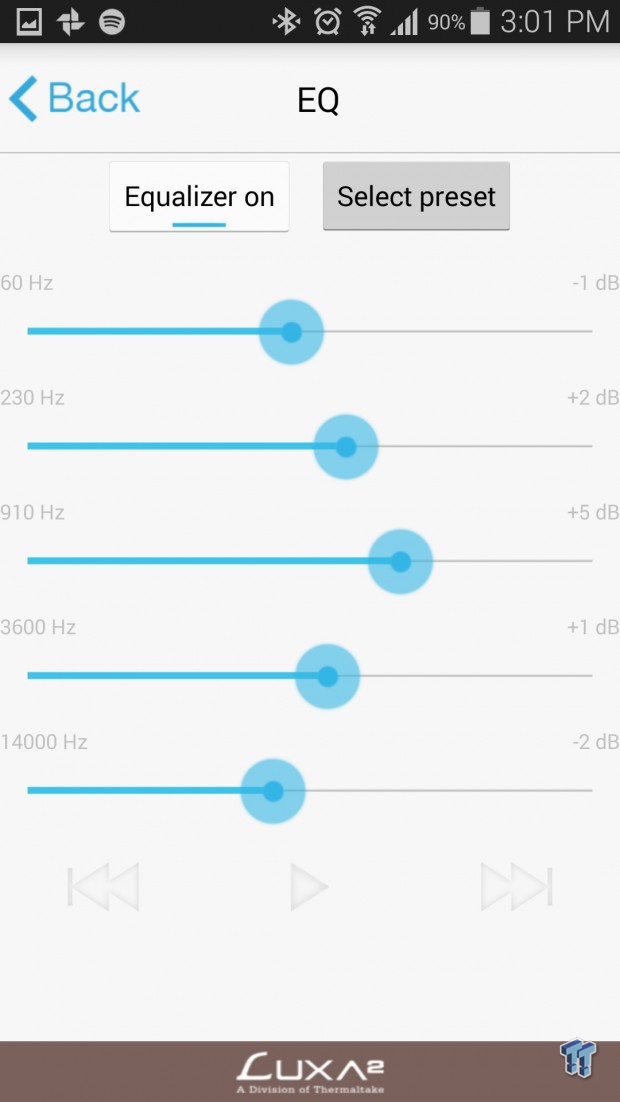 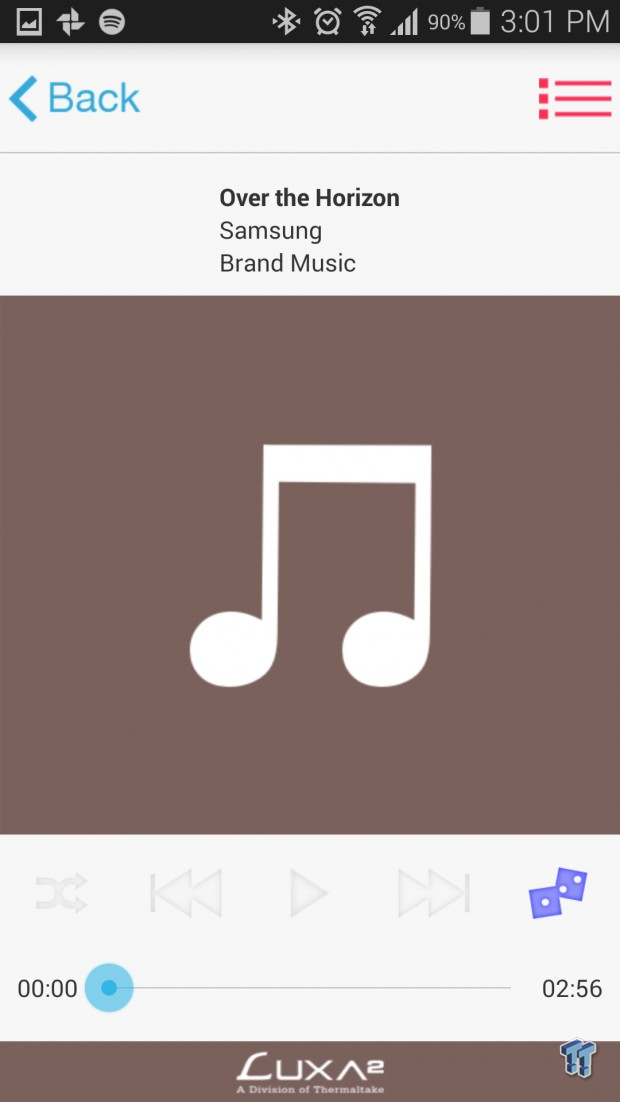 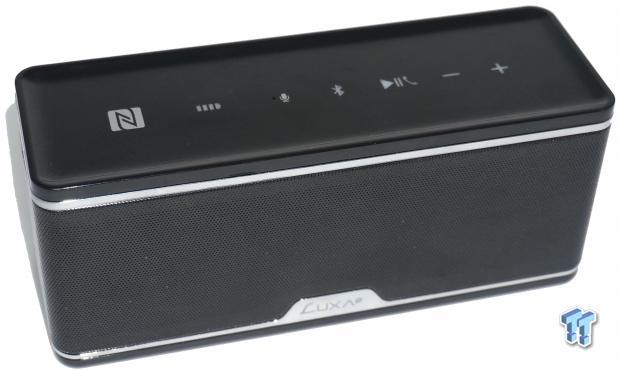 The next two options, Bluetooth and Radio aren't much better. Bluetooth simply disables or enables Bluetooth connectivity between your device and the GroovyW speaker, while the Radio option is probably the best of the four parts of the Audio Center app. The radio will let you play various Internet radios from around the world, which is a nice touch.

One of the first things you'll notice when using the LUXA2 GroovyW speaker is that when it's docked onto the Wireless Charging Station, the charging station lets off an incredibly loud beep. This beep is to acknowledge that the speaker (or whatever other Qi-enabled device you've plonked onto it) has been noticed, and is now charging. The noise is incredibly loud, something I wish I could disable with a switch or button on the Wireless Charging Station.

I used the GroovyW speaker in three different rooms and areas to get a feel for how it would sound. I played some music in my office, in the living area with my wife and daughters, and outside amongst friends. I found the best usage to be outside with friends, because I could have it up loud and it filled the area we were sitting and standing around with quite a lot of great-sounding music. But even in the dining and living areas, it filled them up with whatever music I chose, perfectly. In my office, the same thing applies, it sounded great - even better than I could reposition it anywhere in the room thanks to it being wireless.

When I used it outside, amongst friends and a camp fire, the sound coming out of the LUXA2 GroovyW speaker was more than loud enough. Thanks to its portability, I was able to place it away from the fire, and allowing it to play tunes to everyone around the warmth of the fire. Before that, it was being used on a table and filling the outdoor area with enough oomph that everyone walked away surprised at what the speaker was capable of.

For those who want to sum up the entire review in a few points, the What's Hot and What's Not part of my review will help you. Skip right to this bit if you want a quick read, or if you want to find out what I found to be the most notable parts, we're going to jump into that right now.

LUXA2 Continues Its Beautiful Design Work: LUXA2 have some truly beautiful devices, and the GroovyW continues down that path. From the black-and-silver theme, right down to the beautiful use of blue on the touch-capable buttons on top, it's a work of art. This is one of the best, if not the best-looking mobile speaker, I've had the pleasure of reviewing so far.

Great Sound From a Portable Speaker: The amount of sound that propels out of the GroovyW speaker is great, it is enough to tune in your lounge room to keep it under control, but if you want to unleash it, it's great at that too. I had it at around 90% in an outside environment, with the GroovyW handling it without a problem. There was enough sound being pumped out to the eight people I was hanging around with, that it was like having a small stereo setup.

Wireless Wins Again: Being able to take a portable speaker around might not sound like much when you're sitting there and reading this review, but when it's in your hands and you can move it around, you really come to enjoy the freedom. Not only that, but it charges wirelessly, which is yet another great point. Normally portable speakers will be powered by a microUSB port on the device that would have you plugging something into it to power it, but not here. And for LUXA2 to include the Wireless Charging Station in the box? Even better.

Loud Beep From Wireless Charging Station: The very, very audible beep that the Wireless Charging Station emits when you dock either the GroovyW, or another Qi-based device onto it. I wish there was a way to disable it, because it is a very big point that goes against the product. This beep is simply too loud, especially when it is late at night and everyone is sleeping, and all you've done is put your GroovyW speaker on charge, and there's a gigantic beep that comes from it.

LUXA2 does it again. It has redefined what mobile audio products can be, and at a price of around $120, LUXA2 is quite competitive. If you're in the market for a new mobile speaker, this should be the one that is square on your radar. You're effectively getting two devices here, a wireless charger, and a kick-ass speaker that is capable of being charged wirelessly with the Wireless Charging Station included in the box.

It's a great deal, with a speaker that looks gorgeous. I have my GroovyW sitting in my kitchen now, as my wife uses it to listen to music. But when I want some portable audio, all I have to do is take it off of its dock and use it. If I want to leave the house, I can take the speaker and one of LUXA2's portable batteries, and I have an all-night session of audio in front of me.

PRICING: You can find the LUXA2 GroovyW Bluetooth Speaker with Wireless Charging Station for sale below. The prices listed are valid at the time of writing but can change at any time. Click the link to see the very latest pricing for the best deal. 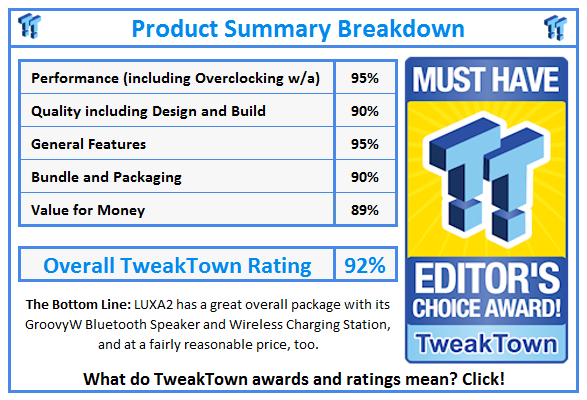