The Planet of the Apes franchise, which last year celebrated its 45th anniversary, has displayed significant longevity, weathering four direct sequels of diminishing quality, two cheap 70's TV series, a critically disastrous Tim Burton reboot and the 2011 prequel Rise of the Planet of the Apes, which tells the backstory to loop back to the 1968 original. However, throughout the ups and downs, the franchise has never failed in sheer entertainment value, but they've never been quite as interesting, nor as thought provoking as its current iteration. 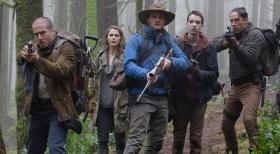 Ten years from the events of Rise of the Planet of the Apes, which saw humanity decimated by the airborne virus ALZ-113, otherwise known as the 'Simian Flu', Dawn of the Planet of the Apes finds the human survivors of the outbreak attempting to continue with their lives in an enclave separated from the ape civilization, which has evolved at alarming speed - even learning to speak English.

With supplies of petrol dwindling, signaling the imminent end of power generation, the human force, led by Malcom (Jason Clarke) attempt to restart the nearby hydropower dam. The only problem being that it runs straight through the ape's territory, putting the two alpha-species on a collision course for conflict. 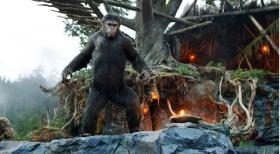 I was pleasantly surprised by how much I enjoyed Rise of the Planet of the Apes, which eschewed the tongue in cheek camp of the later entries, for a more serious and thoroughly engaging, multi-layered tale. Through it all, Dawn proves to be more than a worthy follow-up on multiple levels, including through some truly miraculous motion capture performances, which successfully manage to engage emotionally with the audience. 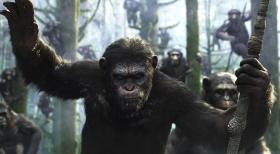 Director Matt Reeves, best known for the micro-budgeted sci-fi hit Cloverfield, under the tutelage of J.J. Abrams, is clearly adept at controlling a much larger production. The opening titles remind of the devastation inflicted on humanity, lending instant dramatic weight to the proceedings, before flinging right into the present dilemma. Admittedly, I didn't really feel that much for any of the human characters. Sure, I didn't want them to go to war, but mainly because the ape race would be decimated by their firepower. That said, Australian actor Jason Clarke does his best (even if he isn't leading man material), but the ever dependable Gary Oldman provides the film much needed case of gravitas.

The real actors here are the apes themselves, and much like its predecessor lived or died by their strengths, this film once again delivers in spades. Partially due to some superb CG, but mostly due to the indispensable motion capture provided by Andy Serkis, Caesar is a brought to screen living breathing hero, with more character and depth than any of the humans. There's a real emotional force to their plight, something which I was quite taken aback by. 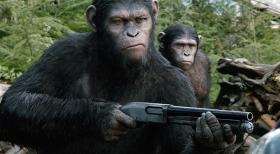 There's a lot going on in Dawn of the Planet of the Apes, proving itself to be highly adept at driving the reality grounded predecessor forward, while continuing to stitch connective tissue to the legacy franchise. I can't wait to see where they take things next, but with a projected release date just two years into the future, I guess we won't have to wait too long at all. 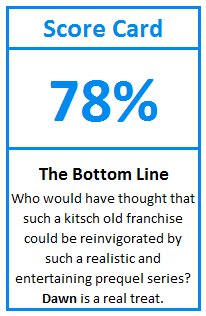