Whilst critics might rip them apart, there's no denying the spectacle of a Michael Bay blow 'em up picture. From The Rock and Armageddon, to Pearl Harbor and Bad Boys. In the Transformers franchise, he's found an entirely appropriate outlet for his style of filmmaking; a kinetic blend of visual effects and live action, with bright bold colors, lots of explosions and sex appeal.

Such was the success of the model that out of five films in the last seven years, the director has only made one picture that wasn't a Transformers picture. But if the diminishing returns of the franchise are any indication, it's well past time that Bay gave the keys to the playpen for someone else to play with. 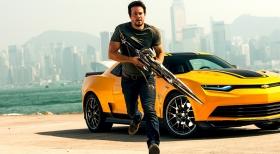 Five years on from the events of Dark of the Moon, the Transformers have fallen out of favor with the United States Government, blamed partially for the fallout from the Decepticon devastation that befell Chicago. The remaining Autobots, led by Optimus Prime (voiced once more by Peter Cullen), have been forced into hiding by CIA agent Harold Attinger (Kelsey Grammer), the head of operation Cemetery Wind, which is responsible for hunting down good and bad robots.

When Prime is discovered by backyard inventor Cade Yeager (Mark Wahlberg) in the guise of a beaten down truck, his daughter Tessa (Nicola Peltz) and her boyfriend Shane (Jack Reynor) became quickly entangled in the battle. Wealthy research firm KSI has discovered the secret to the robots transformation capabilities and replicate their own Transformers, but in doing so, they've unwittingly created an army for the evil Decepticon Galvatron (voiced by Frank Welker). 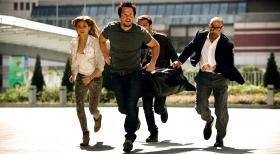 The appetite for Transformers pictures has been voracious, with each of three live action pictures grossing more than the last, making for a combined total of $2.7 billion at the worldwide box office (not counting the funds pulled in from associated merchandising), so you can well sympathize with Paramount and Habro's reluctance to let the franchise sleep. In recent weeks, they've even dated the next entry for 2016, although Bay has not yet signed on.

The fourth outing, which follows from the events of Transformers: Dark of the Moon, wipes the slate clean, with an entirely new cast and even unleashes fan-favourite Dinobots into the mix. Despite this, the stale formula isn't in the script - it's in Bay himself.

I must admit to a personal disdain to many of the reviews from my compatriots, who single out the half-baked script and under-developed roles for actors whom are capable of much more. It's not that they are wrong - the likes of Kelsey Grammer and Sophia Myles are undoubtedly wasted in bit-part roles, but it's far from the film's most fatal flaw. Disappointingly, this could have been dealt with in the editing suite. 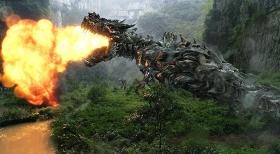 Age of Extinction is one long ass film. At 165 minutes, there is just no way that the kinetic style of filmmaking can hope to sustain audience's attention for that long. Viewing the film in 3D became near painful. The best visual effects, the biggest explosions and the shortest mini-skirts can't overcome this. Cutting at least 45 minutes from the films run time would have resulted in a much tighter experience, with action sequences that pack a punch rather than wear out their welcome and would significantly reduce viewer fatigue. And the studio would have been happy too - it probably would have shaved $40-$50 million off the film's bottom line.

Michael Bay is a solid filmmaker, and many of his films are counted as some of my guiltiest of pleasures. It's just a shame that as his success has resulted in the consolidation of more and more studio clout and final cut approval, he's let his own indulgences get the better of him. 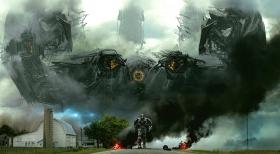 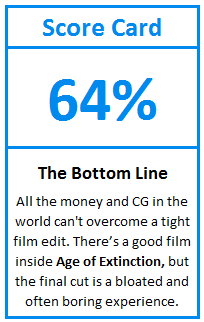