The Haswell refresh from Intel hasn't gone off with a whole lot of fanfare and for good reason; refreshes tend not to grab a whole lot of attention. Saying that, though, we've seen the new Z97 chipset bring with it some awesome new motherboards from our favorite manufacturers. While the chipset itself brings very little new to the table, companies like GIGABYTE, MSI, ASRock and ASUS to name just a few have bought some great motherboards out.

A little before Computex we got a chance to check out the i7 4790 and found ourselves not getting all that impressed over what was on offer. Being a non-K series SKU meant that overclocking was pretty much not an option. Overall the only thing bought to the table was a slightly elevated clock speed. There wasn't much to get excited about, though, as performance really didn't change too much when compared to our beloved i7 4770k.

Today we're getting a chance to look at the processor that was codenamed Devils Canyon. The i7 4790K is of course the popular K version of the newly released i7 4790 that we looked at previously. The K version brings with it the ability to adjust the CPU Multiplier alongside the BCLK which in turn brings with it the ability to achieve a much stronger overclock then the non-K versions of Intel CPUs.

There's really not a whole lot to say about the new processor from Intel. Looking below you can see that the i7 4790K sits with 1150 LGA pin setup and carries with it only two main features that are being highlighted by Intel. The first is the new Thermal Interface Material which is designed to improve cooling. The other is additional capacitors to deliver a smoother power deliver. 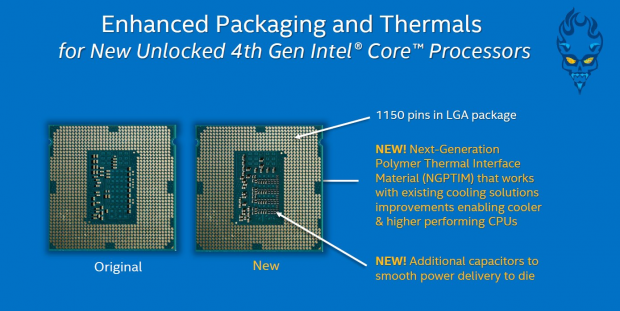 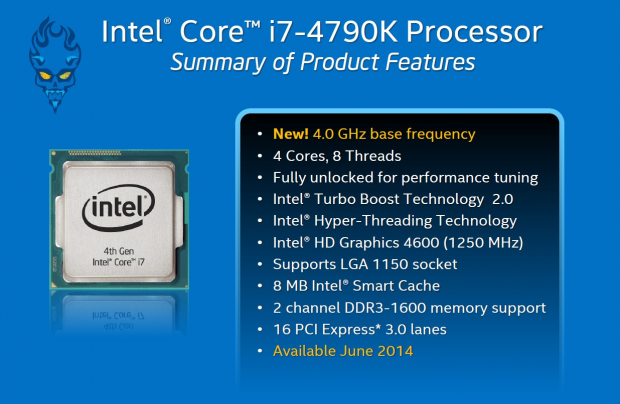 As for the processors itself the big feature that Intel is pushing is the fact that it carries with it a 4GHz base frequency. This is fantastic and sounds really nice; but the bottom line is that it's only 100MHz higher than the i7 4770K. Looking above you can see other main features include 4 Cores, 8 Threads, Unlocked Performance Tuning, Turbo Boost 2.0, Hyper-Threading and Intel HD Graphics 4600 to name some of the main features. Let's leave it at that, though, and simply move forward into our test system setup where we cover the overclocking side of things before we get into the performance of the new Intel processor.

We have a slew of CPUs that are sitting alongside our Intel I7 4970K today ranging from older models like the i7 990X Extreme Edition to the super expensive i7 4960X Extreme Edition. As for the AMD side of things we've included the AMD FX-8150. The main thing we want to do here, though, before we get into the performance of our Devils Canyon CPU is see just what happen with overclocking.

What we had hoped for was to get something that would sit better then what our previous generation i7 4770K achieved. That particular processor went from around 4.9GHz – 4.98GHz on a strong motherboard. With 4.9GHz our starting point we figured that we would head into the BIOS and adjust out CPU multiplier to 49x. Straight away we saw our System not booting up. This was a little disappointing.

We headed back into the BIOS to adjust some of the voltages more to see if we could get this happening. No matter what we did, though, this just wasn't going to happen. We decided to head back into the BIOS again and adjust the multiplier down one to 48x. This bought us more luck but once in Windows we weren't greeted with the stability we need for the system to complete our benchmark line up. 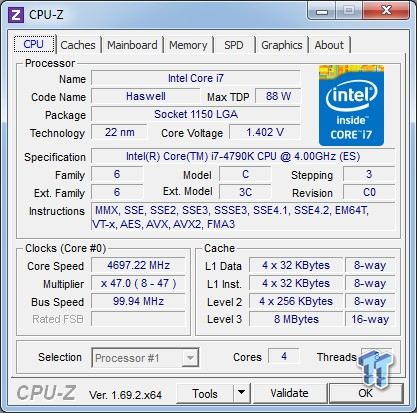 In the end we had to settle for a 47x Multiplier which bought our CPU in at 4697MHz or 4.7GHz as illustrated in our graphs here today. This overclock is a little disappointing when compared to what we saw out of our 4770K. Talking to some friends, though, this is a pretty standard overclock for the new processor. The 4.9GHz+ clock that our older 4770K saw was a very strong overclock when compared to others and this particular CPU came a little later and was pre tested from another company. Hopefully in the coming weeks we'll get a chance to see a 4790K that can clock higher for our motherboard reviews. For now, though, the 4.7GHz we achieved with the ASRock Z97X Killer will have to be enough.

Starting off with PCMark 7 we can see the new Intel i7 4790K offers some strong performance. You can see it manages to outperform some of our older but more expensive processors as well. Overclocking helps boost performance slightly in both tests; but not by a major amount.

Hype Pi like above shows a nice performance increase as well against the lineup of processors we have here. Compared to the i7 4770K it's replacing the new 4790K shaves almost 30 seconds off our Hyper Pi time. That is then reduced nearly a minute more when we throw overclocking into the mix.

Looking at our AIDA64 CPU performance you can see that performance gains over the previous i7 4770K are very strong here with big gains across the board seen in both the CPU Cache Write and Read tests.

As for memory performance you can see we're slightly up across the board but not by a major amount. Overclocking as well sees little to no gain in performance here unlike the CPU Cache tests which manages to see a nice little bump in both areas.

CPU Mark performance is a little all over the place here. You can see that at stock most of the results on the Intel i7 4790K are below the i7 4770K. Overclocking brings a decent little boost that brings it ahead at times.

While the overall Memory Mark is down on the Intel i7 4790K you can see that the Write performance along with the Cached and Uncached performance is all up.

CINEBENCH sees the Intel i7 4790K get a decent jump on the previous generation i7 4770K. It's not quite up there with the top LGA 2011 setups; but you can see it's heading in the right direction. As for overclocking you can see that it gives us a nice little performance bump which sees us climb into the double digit area.

While overclocking doesn't affect our overall Lightroom time much; you can see out of the box the Intel i7 4790K does an excellent job. Looking above you can see it gets a decent jump over the previous generation i7 4770K and is sitting around with the most expensive LGA 2011 options.

MediaEspresso sees a nice performance increase with a solid 3 minutes shaved off the overall encode time. Overclocking takes that time even further down coming in under 14 minutes which is below all our other setups here. Of course we're overclocked so that needs to be taken into account. The associated cost with some of the other processors, though, is something that also needs to be taken into account.

Gaming performance is pretty standard. At stock we see it's a little higher than the i7 4770K but overall nothing to get excited about. Overclocking also sees a slightly performance boost at the lower resolutions. This is all very standard here.

Power draw numbers on the system are solid. The idle sits lower along with the load when compared to the previous generation i7 4770K. 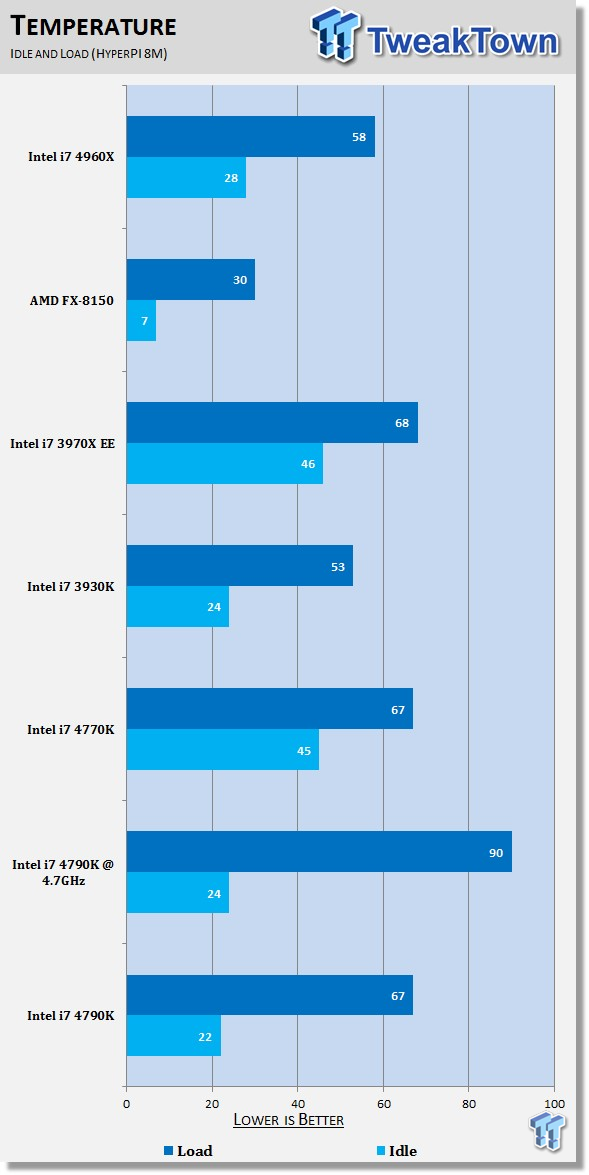 Temperature numbers also look good; the idle numbers are significantly down while load lines up with the i7 4770K. Overclocking does indeed cause a spike in temperature and a little more than we'd like considering that we're a good 200MHz+ lower in clock speed compared to our 4770K when it was running at its max overclock.

The new Intel i7 4790K isn't anything amazing when compared to the i7 4770K that it's replacing. That's not a bad thing, though. For starters the i7 4770K is and was a fantastic processor. It offered great out of the box performance and overclocking is extremely easy. With little effort you could increase the clock speed easily in excess of 500MHz with little adjustment to the voltage and little added heat.

The other big thing is the simple fact that the new Intel i7 4790K comes in at the same price point as the previous generation processor. This just straight out replaces it. You'd be kind of crazy to move from a 4770K to a 4790K. The upgrade just isn't worth it and there's no way you would get the money back on selling your current 4770K to justify the upgrade.

At the same time you'd be crazy to not buy the i7 4790K if you were looking at buying the 4770K previously. If you're going to grab a Z97 motherboard and you want a K series based i7 processor; this is going to be the one to buy. If you're not going to overclock, though, most people would say go down the path of the non K based i7 4790.

At around $25 cheaper we'd say make the move to the K one even if you're not overclocking assuming your budget can afford it. First it's going to give you a better resale rate down the road. Secondly if you don't know how to overclock but someone you know does; they could easily just come over and give you an added 400 – 500 MHz in a blink of an eye. Of course there's also the fact that it's got a base clock of 4GHz which is also nice.

In the end the Intel i7 4790K slightly improves on what is already a fantastic processor. There's no reason to not buy this if you're looking to spend over $300 on a processor. Combined with the slew of new Z97 motherboards that have hit the market; this paired with a nice high-end single GPU Video Card from AMD or NVIDIA is going to make for a truly wonderful gaming system. 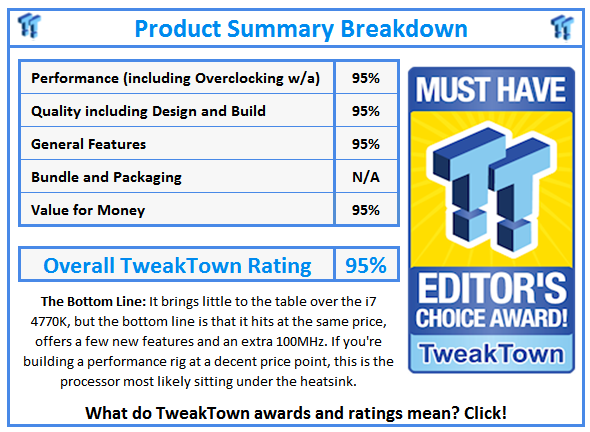