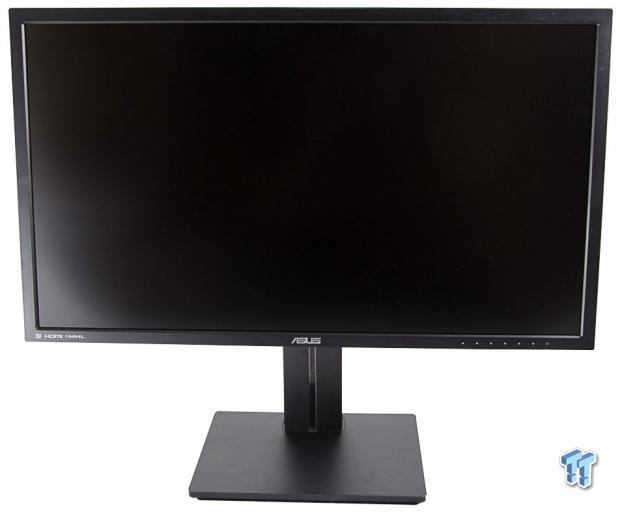 We've got quite the treat in the lab today in the form of the new ASUS PB287Q 4K monitor. 4K is a beautiful technology that provides the same screen area as four 1080p monitors (when you times x and y axis by two), as illustrated in the image below. 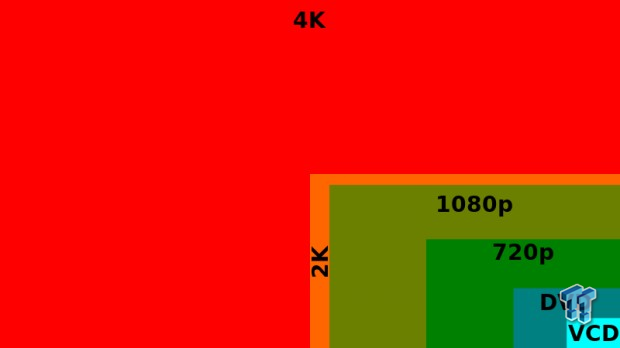 4K monitors are starting to get into a reasonable realm of pricing, meaning that enthusiasts should start to pick up 4K displays to game on, and professionals will be picking them up for the extra screen area. Enter the ASUS PB287Q.

While not specified, I do believe this monitor uses a 16:9 aspect ratio TN panel. The more off-center you view the monitor, the darker and more off the colors will become. ASUS says that this panel has a horizontal viewing angle of 170 degrees and a vertical viewing angle of 160 degrees.

The monitor stand is quite good. It allows for full swivel, tilt, pivot, and height adjustment. ASUS notes that the competing 4K Samsung monitor available for a similar price only features tilt. We haven't reviewed the Samsung monitor, so take that for what it's worth.

Regarding the technical specs, the PB287Q features a maximum refresh rate of 60Hz. To get a 4K monitor running at 60Hz, you require a DisplayPort 1.2-equipped video card and relevant drivers. HDMI can only support 4K at 30Hz.

The PB287Q features a response time of 1ms Gray to Gray, a contrast ratio of 100,000,000:1, a rated brightness of 300 Nits, and support for 1073.7 million colors (10bit). On the connector front, it features a DisplayPort 1.2 port and two HDMI ports, as well as MHL for viewing content from your mobile device that also includes MHL support. The monitor also has built-in speakers for basic audio needs. The monitor also features VESA mounts, something ASUS again notes the competition lacks.

It also comes with a complete complement of features, including features for gamers and content creators, such as a solid 1ms (GTG) response time. Also, for instance, ASUS' GamePlus technology features enhanced aim points and timers depending on the game type.

ASUS says the monitor will release for $649 in the US and $699 in Canada on June 10. Since this review is being written before the monitor is available, we'll have to go off of the above pricing that was provided to us.

As far as packaging goes, the PB287Q was shipped inside of a plain brown cardboard box that covered some of the main specifications, including the size, resolution, response time, and inputs. As you can see, the box appears to have taken a bit of a beating, but the monitor arrived in perfect condition. 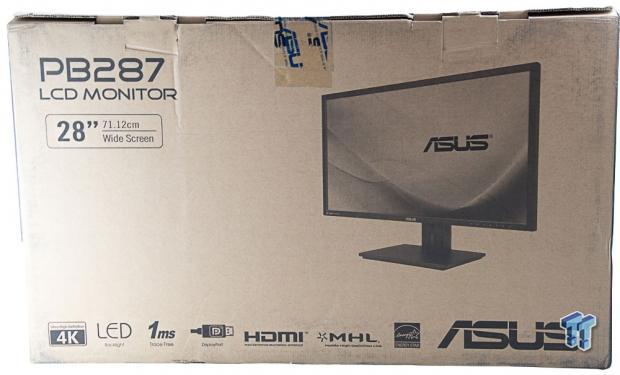 Below, you can see how the monitor is protected by the foam (top foam piece removed). I would like to see the monitor facing the other direction or a bit farther away from the box to protect it from box punctures.

Assembly is incredibly easy. The below picture shows how the monitor comes out of the box. 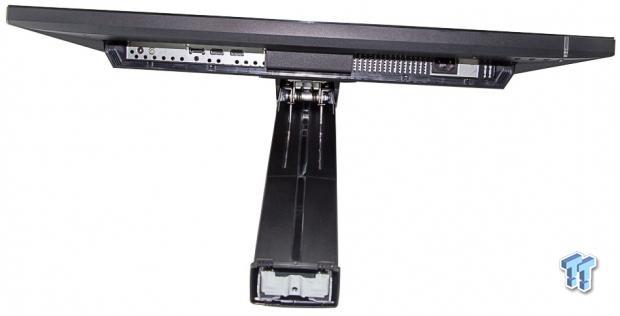 You simply have to latch the base to the stand. Note the two black protrusions in the picture above. Make sure to insert these into the base first (trust me, I learned from experience so that I could provide insight to my readers). 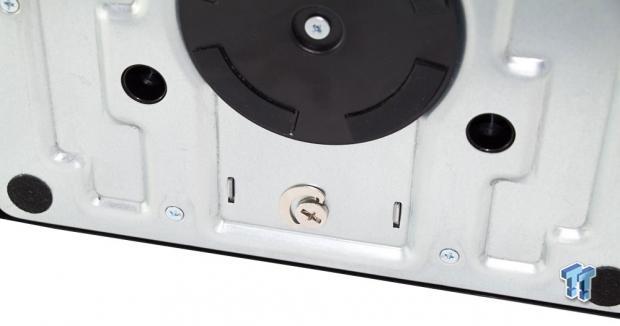 The simply screw the base to the stand using the built-in metal tab or with a flat blade or Philips screwdriver.

On the left half of the monitor, from left to right, we have the audio out and in ports, the DisplayPort 1.2 input, and the two HDMI 1.4 inputs (one is MHL compatible).

Above, you can see the sole power connector on the right half of the monitor. It makes use of a standard PC power cable. 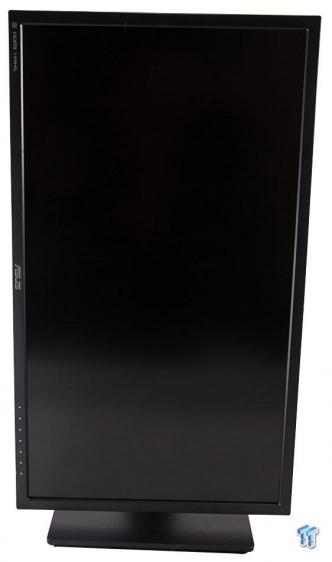 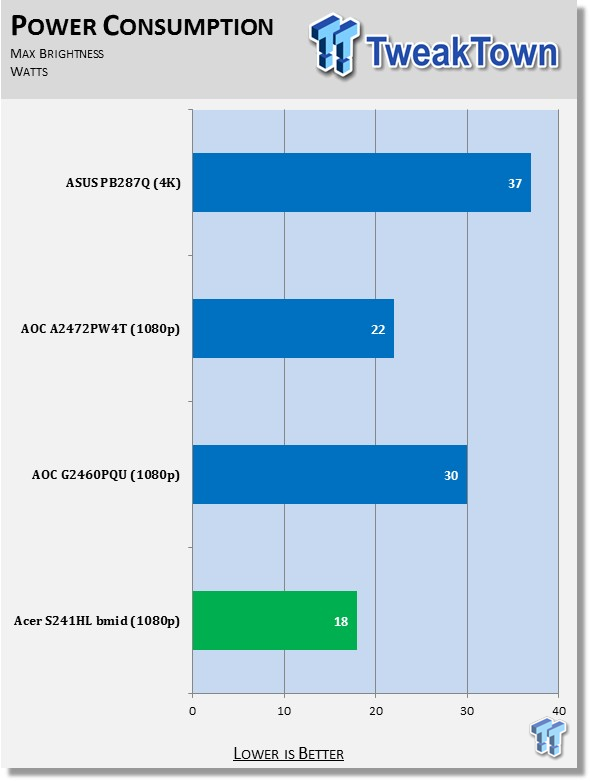 This 4K monitor is larger and has four times the amount of pixels to drive as the other monitors. 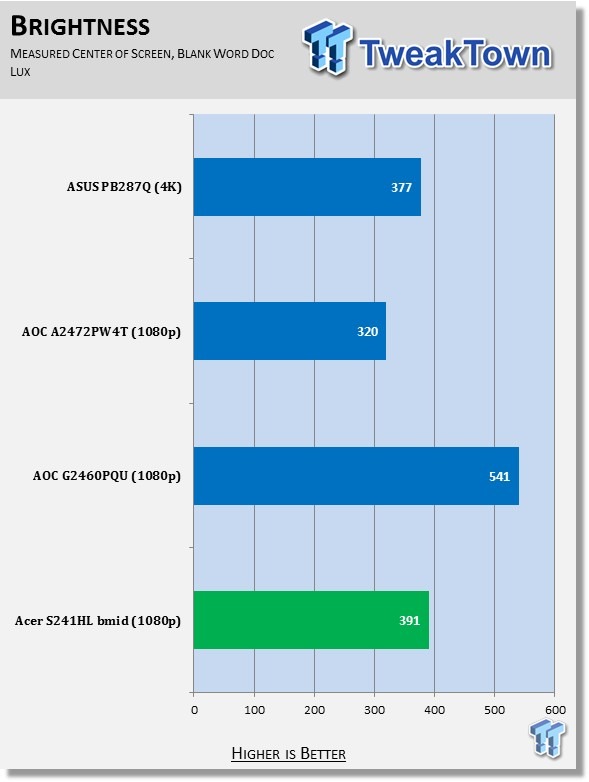 As you can see in the chart above, the PB287Q produced a middle-of-the-road score of 377 Lux. It's not the lowest we've seen, but it is in the bottom half of the pack. It should be noted, however, that 377 Lux is more than plenty for most tasks. Quite frankly, the 541 Lux of the AOC G2460 was absolutely blinding as tuned to its maximum settings. 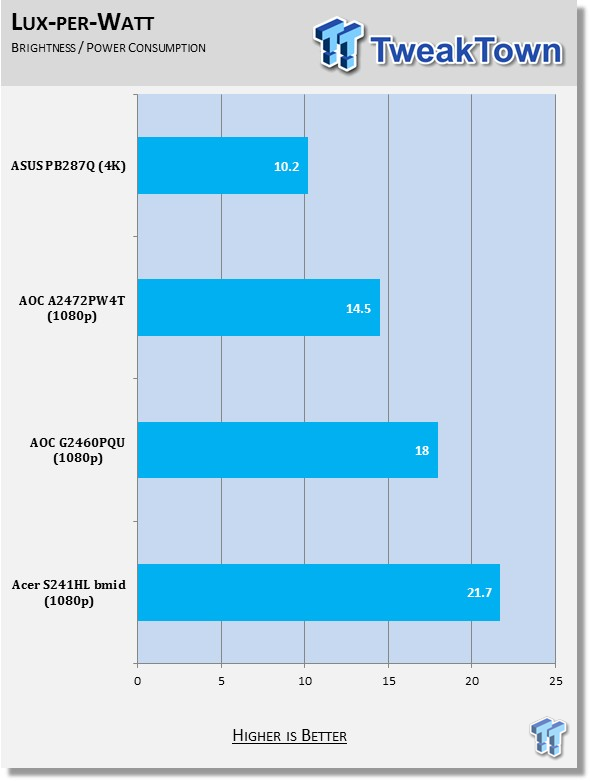 As you can see above, the PB287Q produces a paltry 10.2 Lux-per-Watt. Again, this isn't the fairest of comparisons, so we'll hold off our judgment of efficiency until we get more 4K displays in for review.

Let's just start with the obvious. 4K is awesome for professionals. My raw 18-megapixel photos can almost be shown at 100 percent zoom on a 4K monitor, as opposed to a 1080p monitor that just shows a small portion (less than one-fourth).

This is my first chance to get up and close with 4K, and I'm just going to put it out there: 4K is awesome. We've had quite a bit of 4K discussion here on TweakTown. Our video card reviews have just gone to 4K. Our very own Anthony Garreffa has written in detail about 4K. Now we're starting to get 4K monitors in for review. The time is ripe for 4K, so we hope that we'll start seeing 4K content being produced. Netflix, I'm looking at you to lead the way. Movie and TV studios, I'm also looking at you to get into this ASAP.

The monitor has performed admirably during the course of its review. I will note that trying to game on it with my dual 6870s appears to have pushed my secondary 6870 too far as it now artifacts when trying to game. However, I can't be certain that 4K gaming caused that.

Coming in at $649 in the US, the price point is right. Looking at Newegg, the only cheaper 4K monitor available is a Dell for $590. After that, you have the Samsung panel that ASUS felt was apt to compare to the new PB287Q at $699.

Let's face it: 4K is here and it doesn't appear to be going anywhere. Let's just hope it catches on better than the 2560x1440 resolution that didn't seem to get much adoption. At this price, I expect enthusiasts to start going out and picking up 4K monitors for gaming and home use. It's like having four 1080p monitors in one, so it could theoretically replace my triple monitor setup.

Clearly, the ASUS PB287Q has ticked all of the boxes required for a kickass display at a solid price. I certainly want to own this one for myself, making it an obvious TweakTown Editor's Choice display. 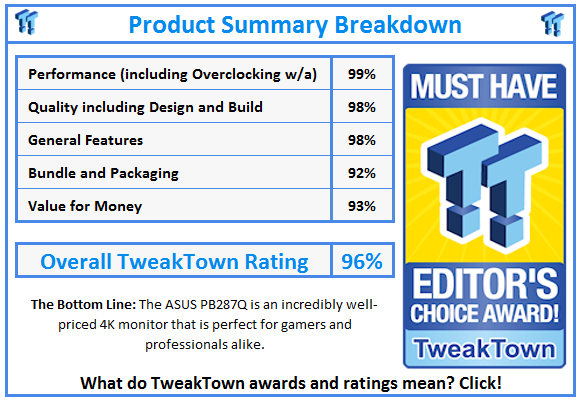