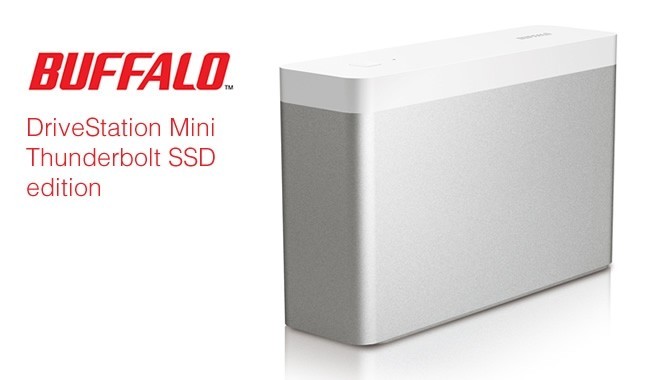 The DriveStation Mini Thunderbolt is a dual drive storage solution setup with your choice of two 128GB, 256GB, or 512GB SSDs. This solution is RAID enabled, offering options such as JBOD, RAID 0, and RAID 1 if you want that extra bit of data redundancy. With the DriveStation, you have the ability to daisy chain up to 6 more devices via Thunderbolt, and Buffalo was even kind enough to supply the retail packaging with the Thunderbolt cable, so this unit is basically plug and play.

Compatibility of the Buffalo DriveStation Mini Thunderbolt extends to OS X 10.6+, and of course, you will need an available Thunderbolt port. 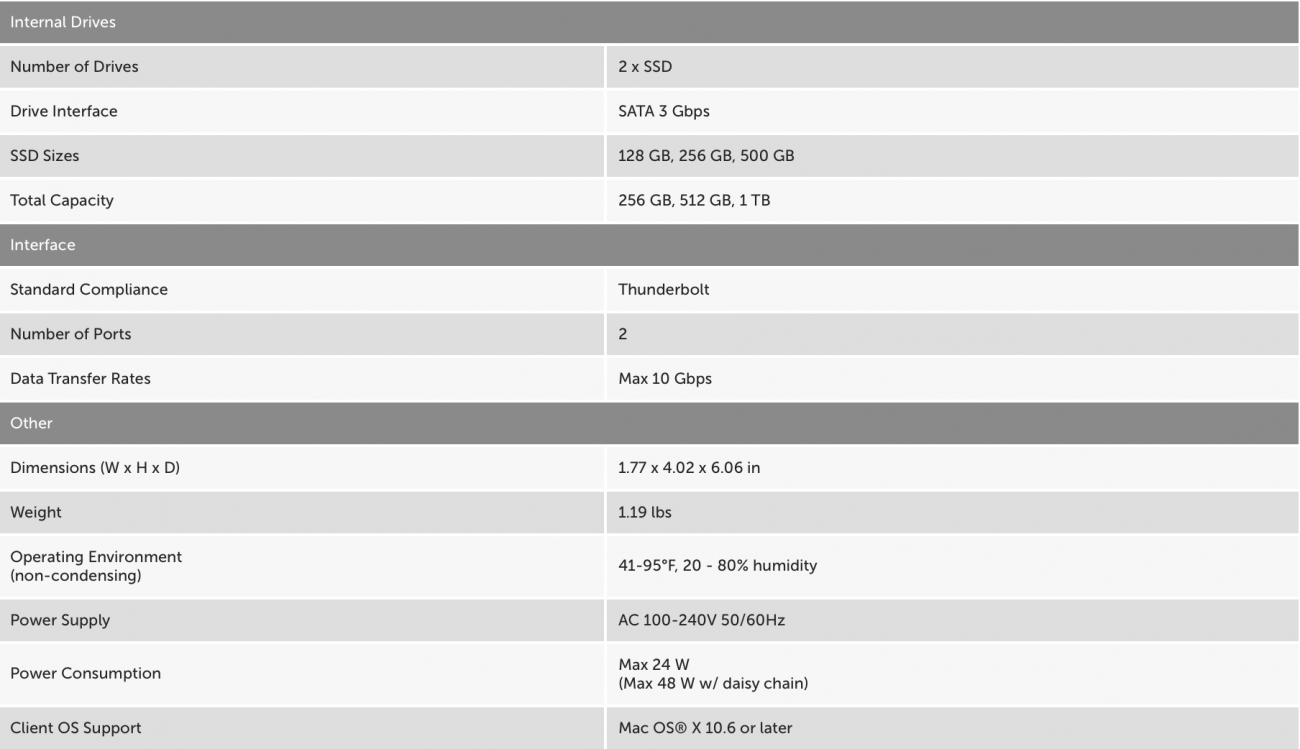 MSRP for the 512GB DriveStation Mini Thunderbolt is set at $649.99 with a three-year warranty. Availability is high at this point with many online retailers having the unit in stock.

PRICING: You can find the Buffalo DriveStation Mini Thunderbolt (512GB) for sale below. The prices listed are valid at the time of writing but can change at any time. Click the link to see the very latest pricing for the best deal. 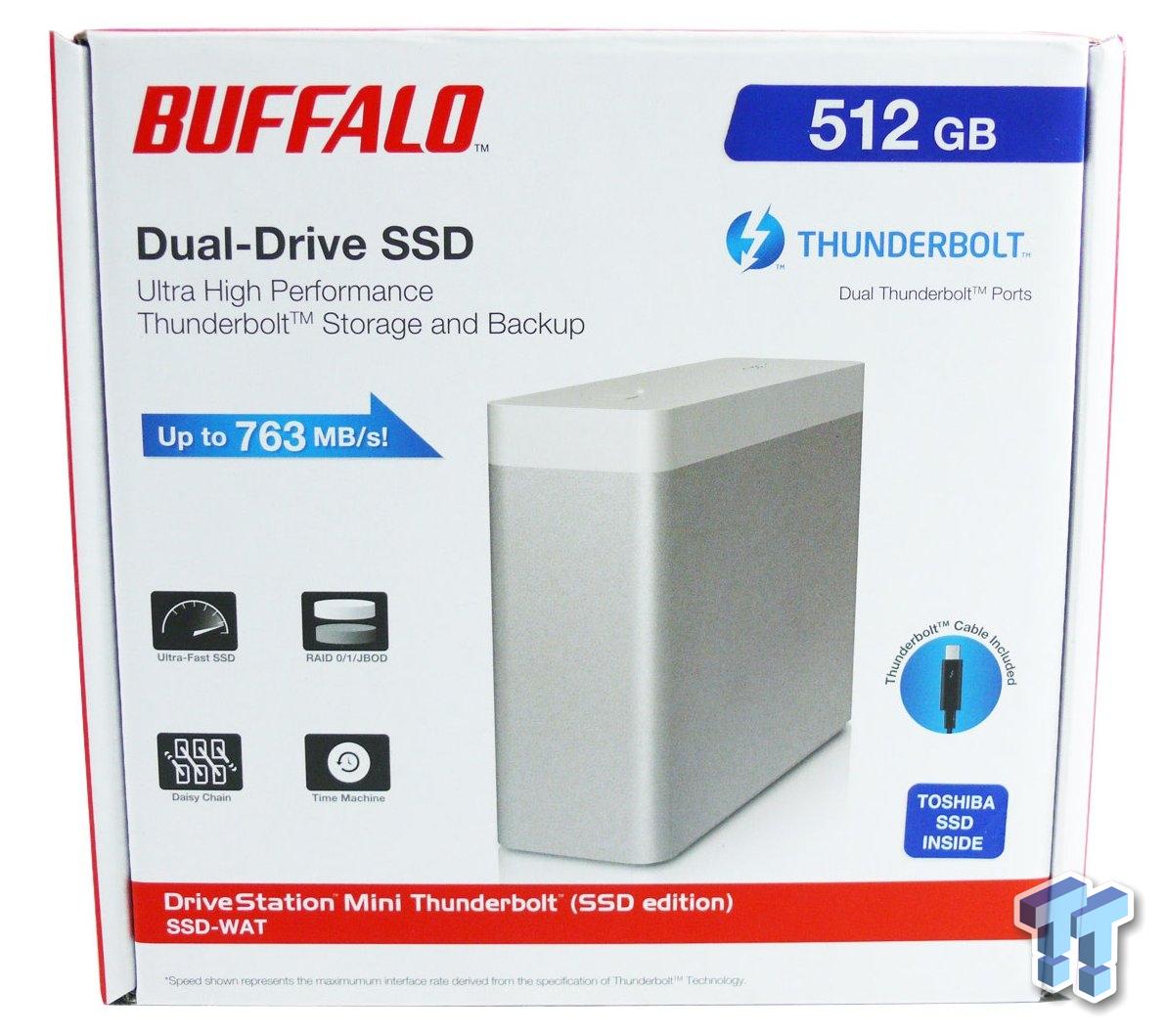 Packaging for the DriveStation carries an image of the device on the front with marketing information surrounding. Also note that Buffalo has chosen to go with Toshiba SSDs in this device. 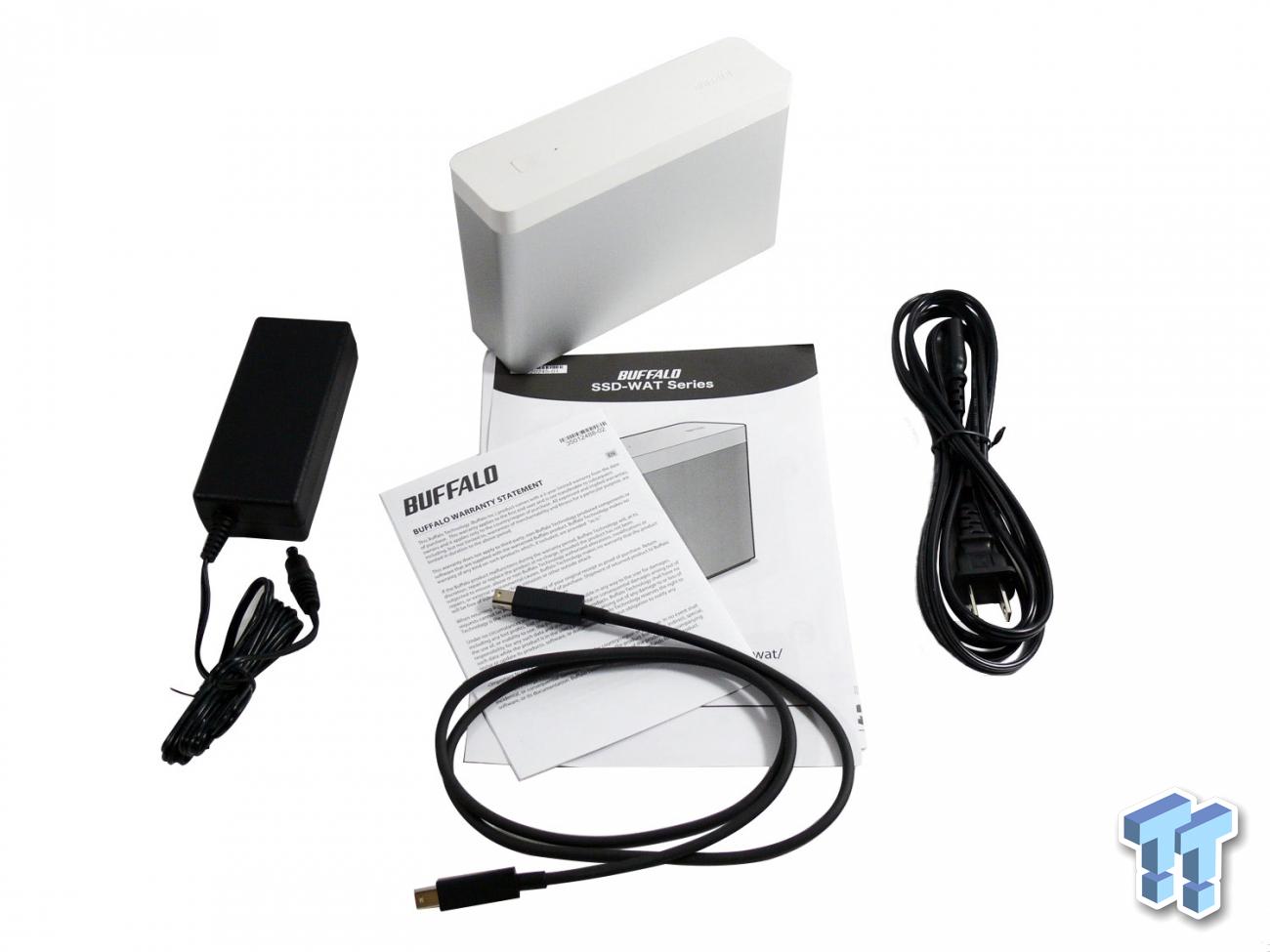 Looking at the DriveStation, we find it having a rather small footprint similar in size to the Little Big Disk from LaCie. 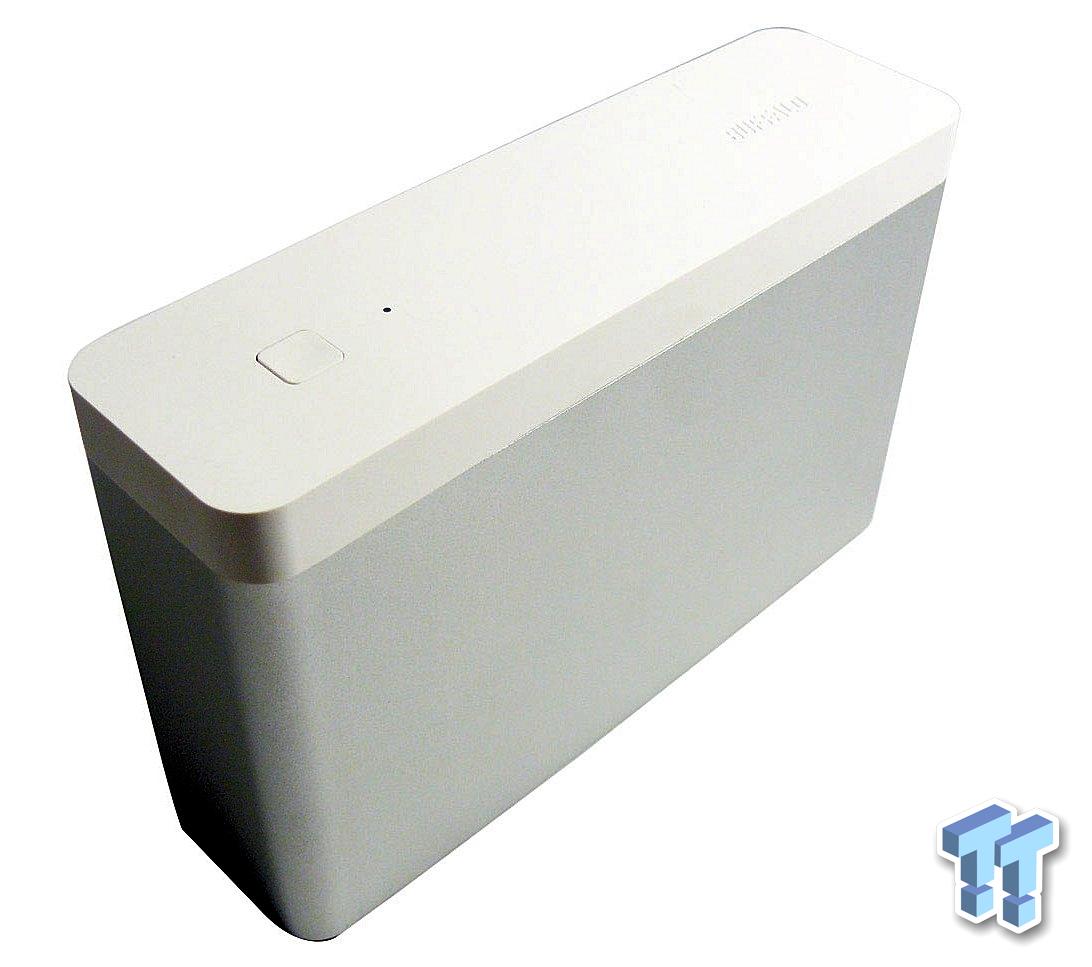 The back of the unit houses dual Thunderbolt ports along with the cooling fan and power input. 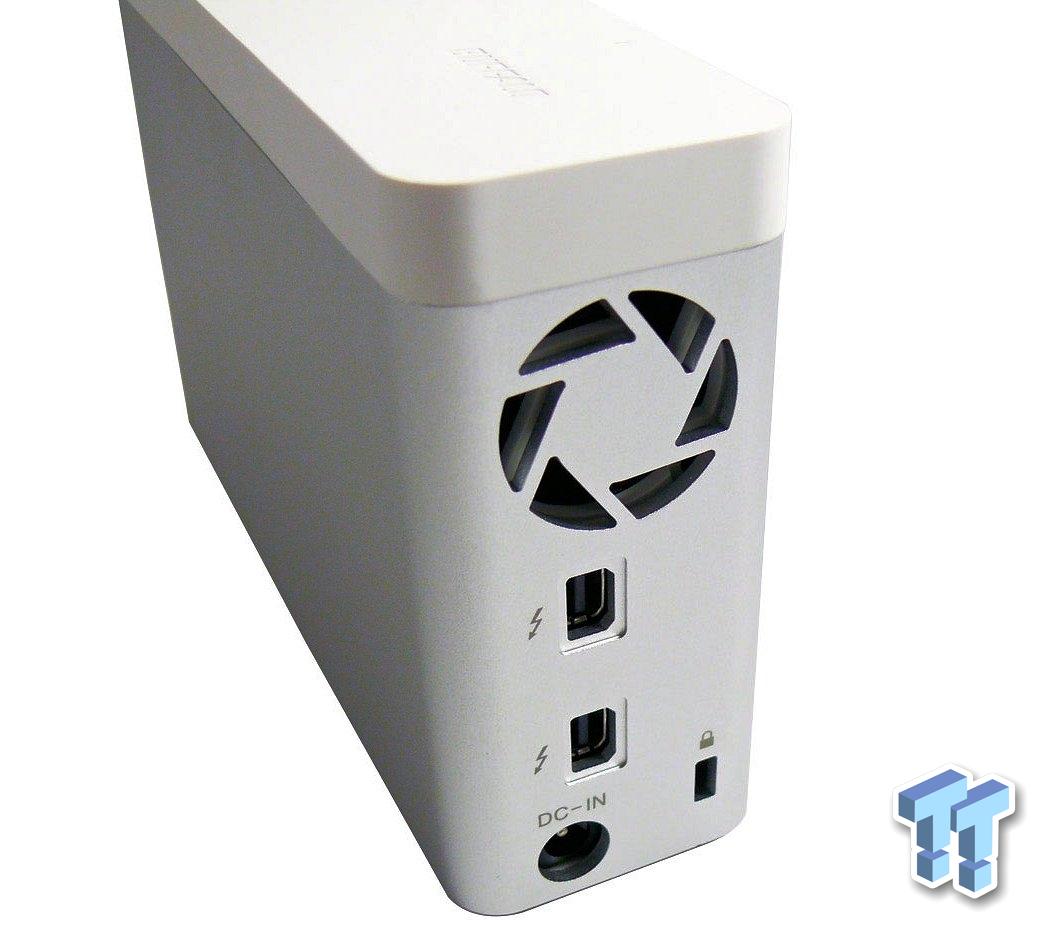 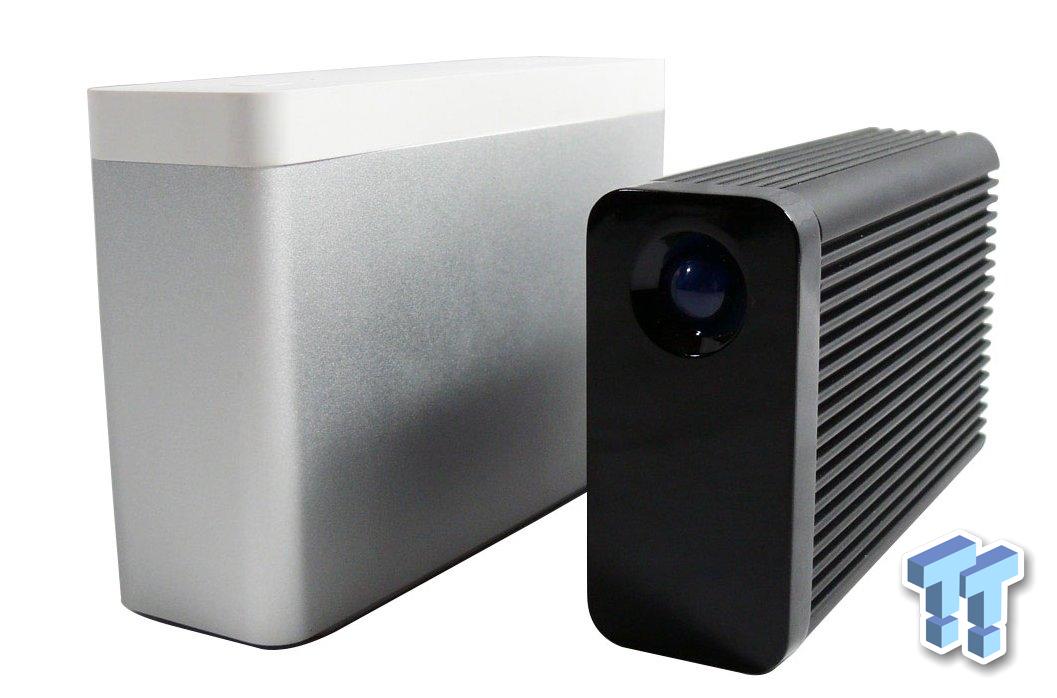 Here you can see the size of the DriveStation Mini right next to the Little Big Disk 2 from LaCie. 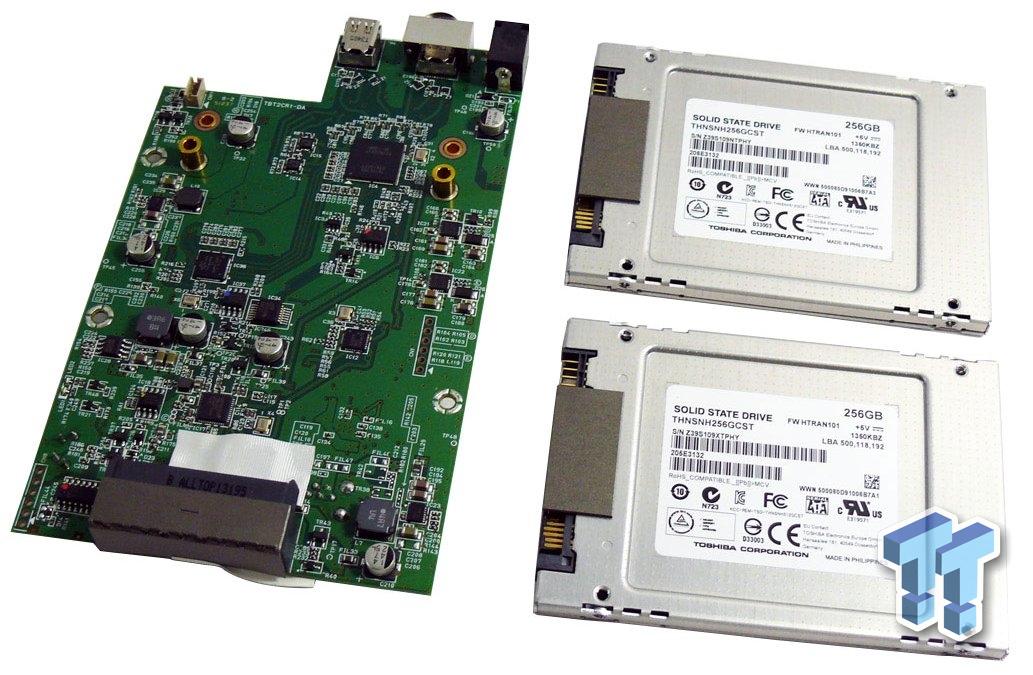 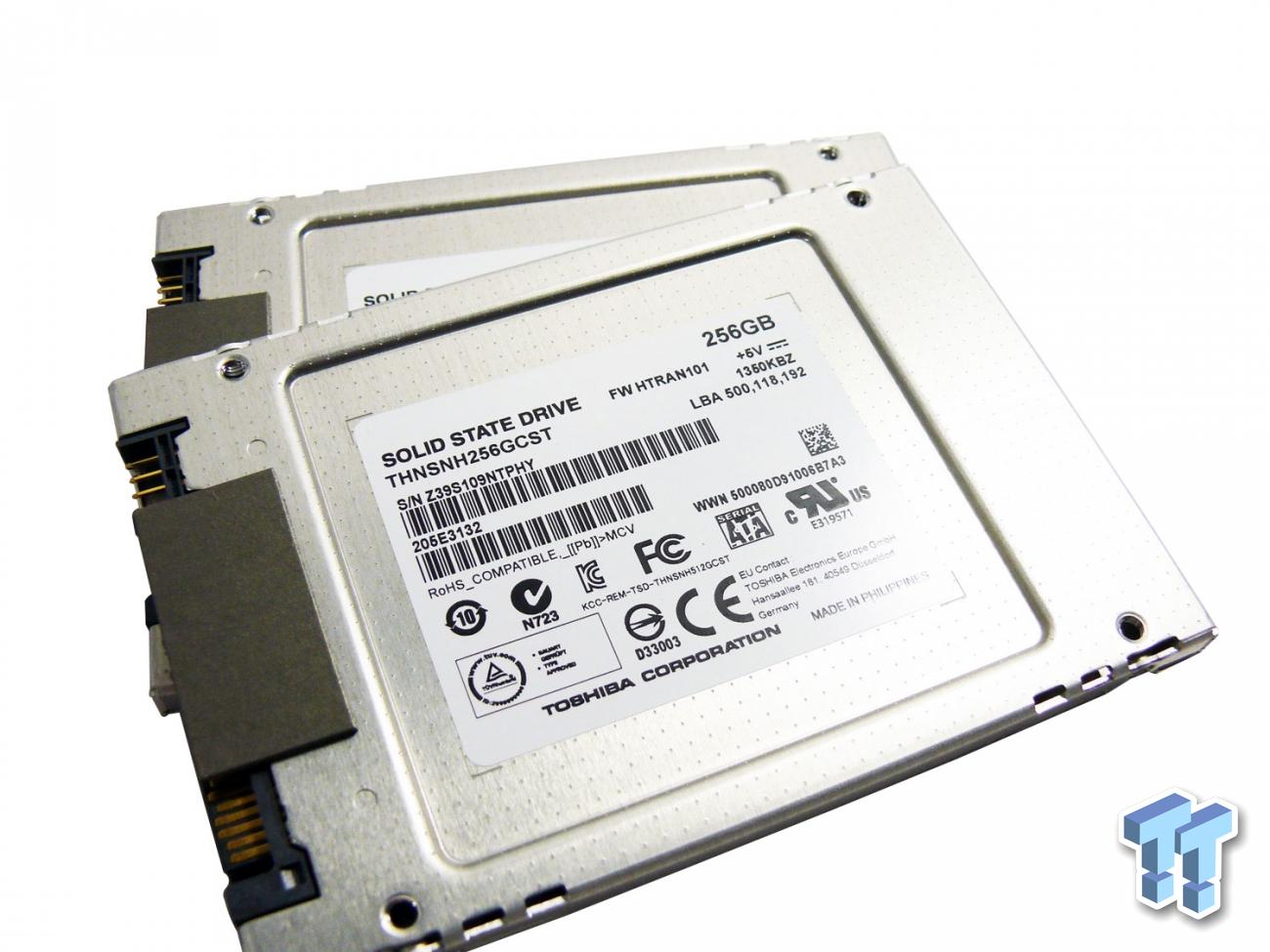 The SSDs used in the DriveStation are the Toshiba THNSNH256GCST.

In testing the performance of Thunderbolt storage solutions, we utilize the Apple MacBook Pro Retina Late 2013 model, which is running OS X 10.9.1 as of this article. Full system specifications are available above. To create RAID volumes in OS X, I use Apple Disk Utility with 64k stripe size for RAID volumes. 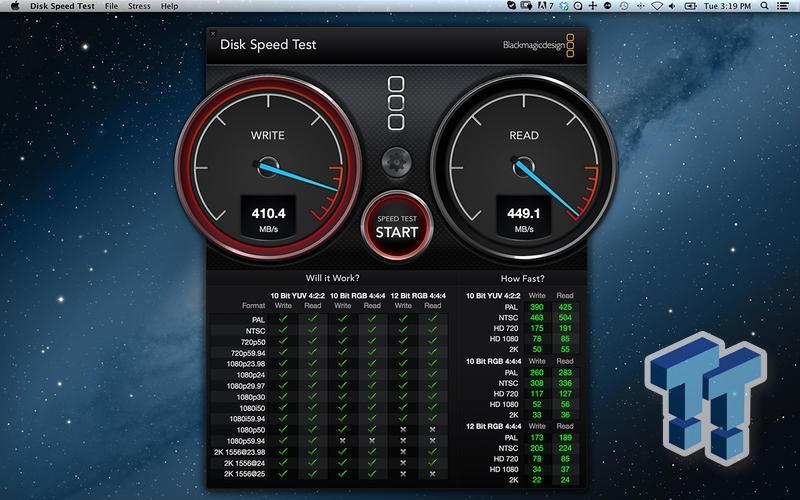 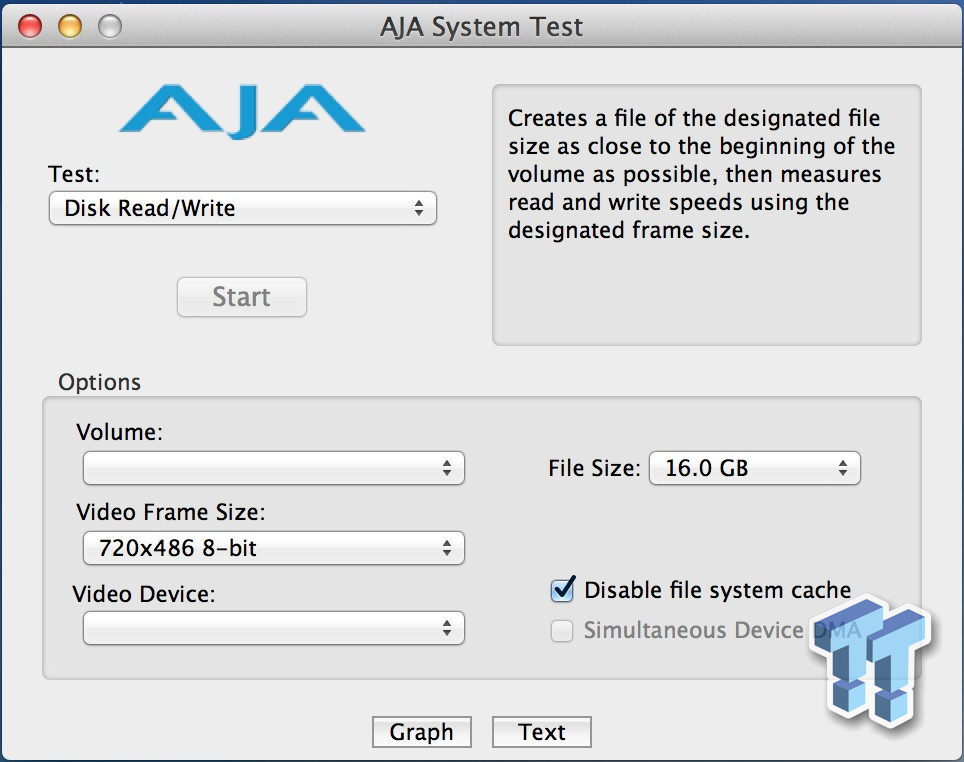 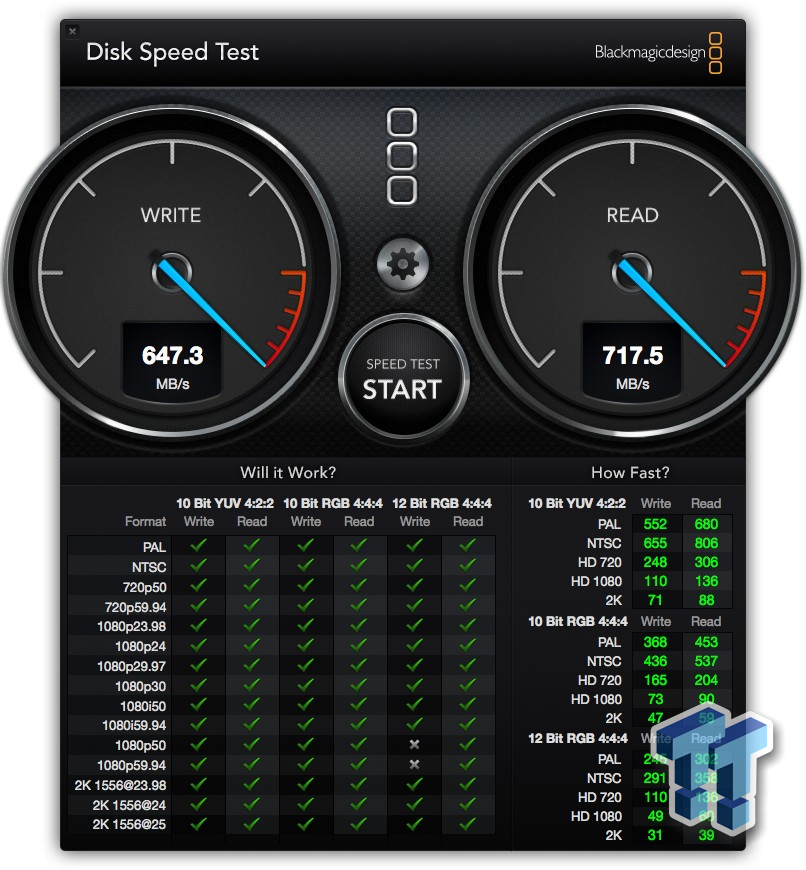 In our first test, we took the DriveStation through BMG in RAID 0. Here we ended up with 717 MB/s read and 647 MB/s write. 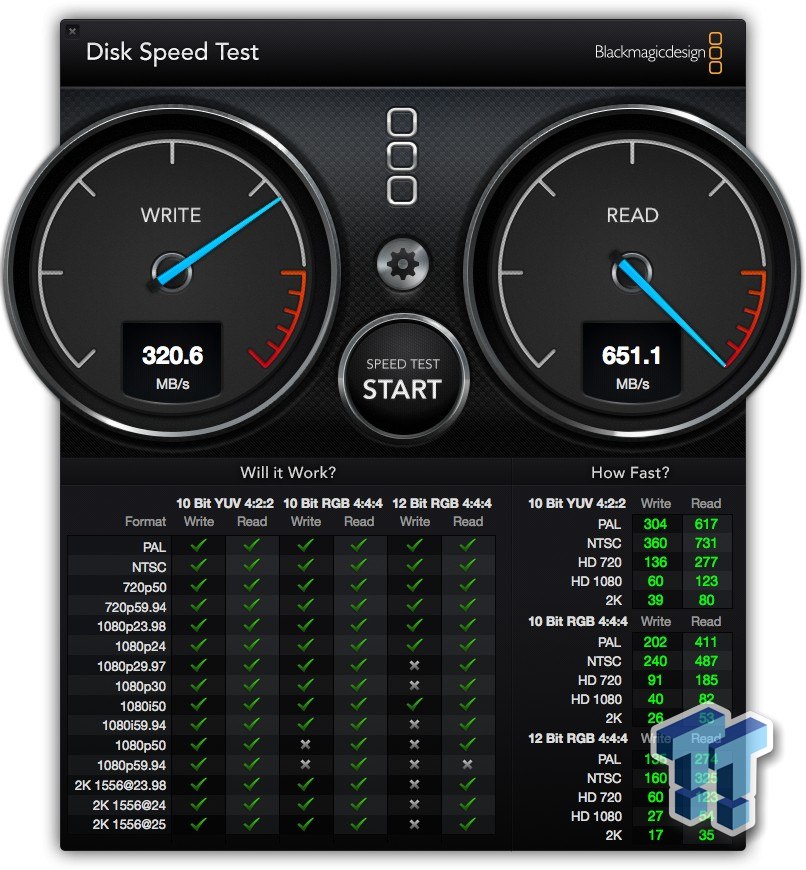 All testing with AJA System Test is done with a 16GB file size over roughly 700 frames. 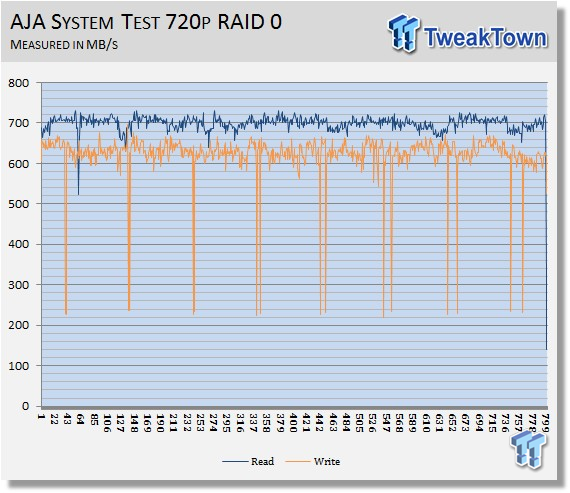 In our first testing AJA, we look at 720p RAID 0 where we find the DriveStation peaking at 730 MB/s read and roughly 650 MB/s write. 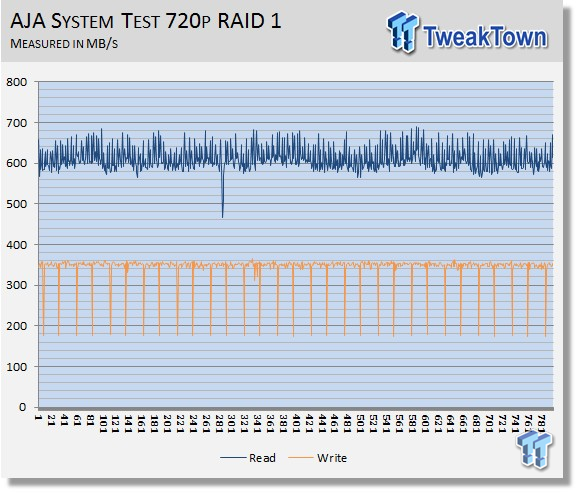 Moving to RAID 1, we find the read performance really didn't suffer too much, and it is still near 700 MB/s, while write performance hovered around 360 MB/s 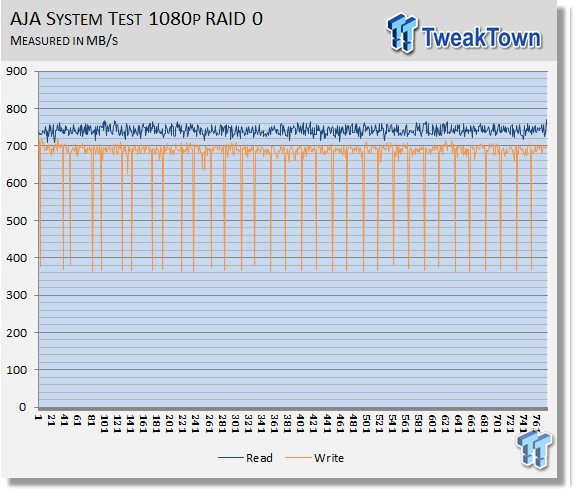 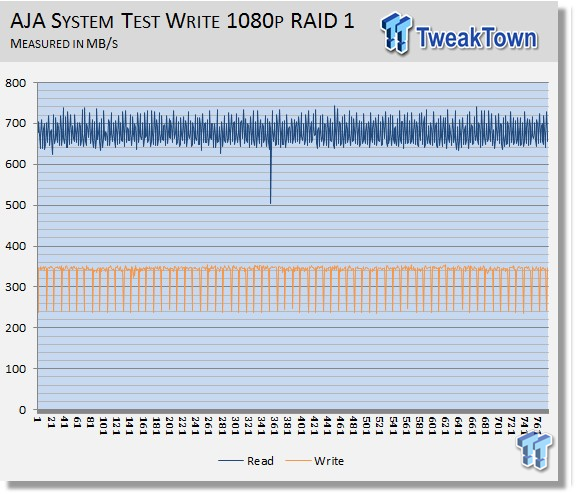 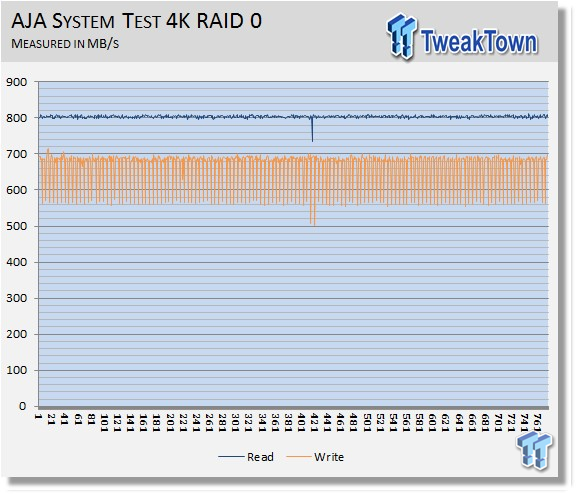 4K really allowed the DriveStation to stretch its legs a bit. Here we touched 800 MB/s read and 700 MB/s write within RAID 0. 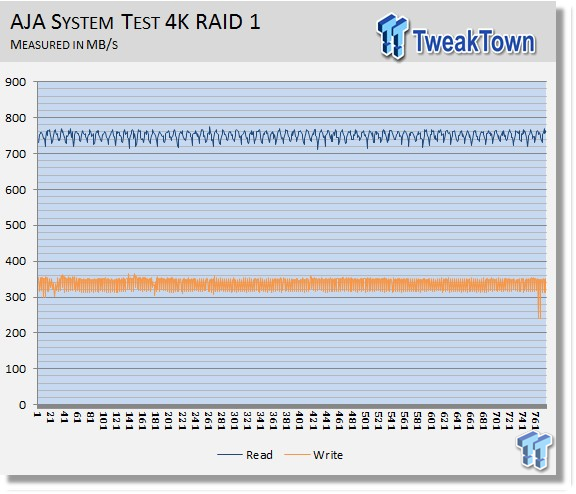 RAID 1 with 4K had the DriveStation right around 750 MB/s read with write speeds around the same 350 MB/s mark. 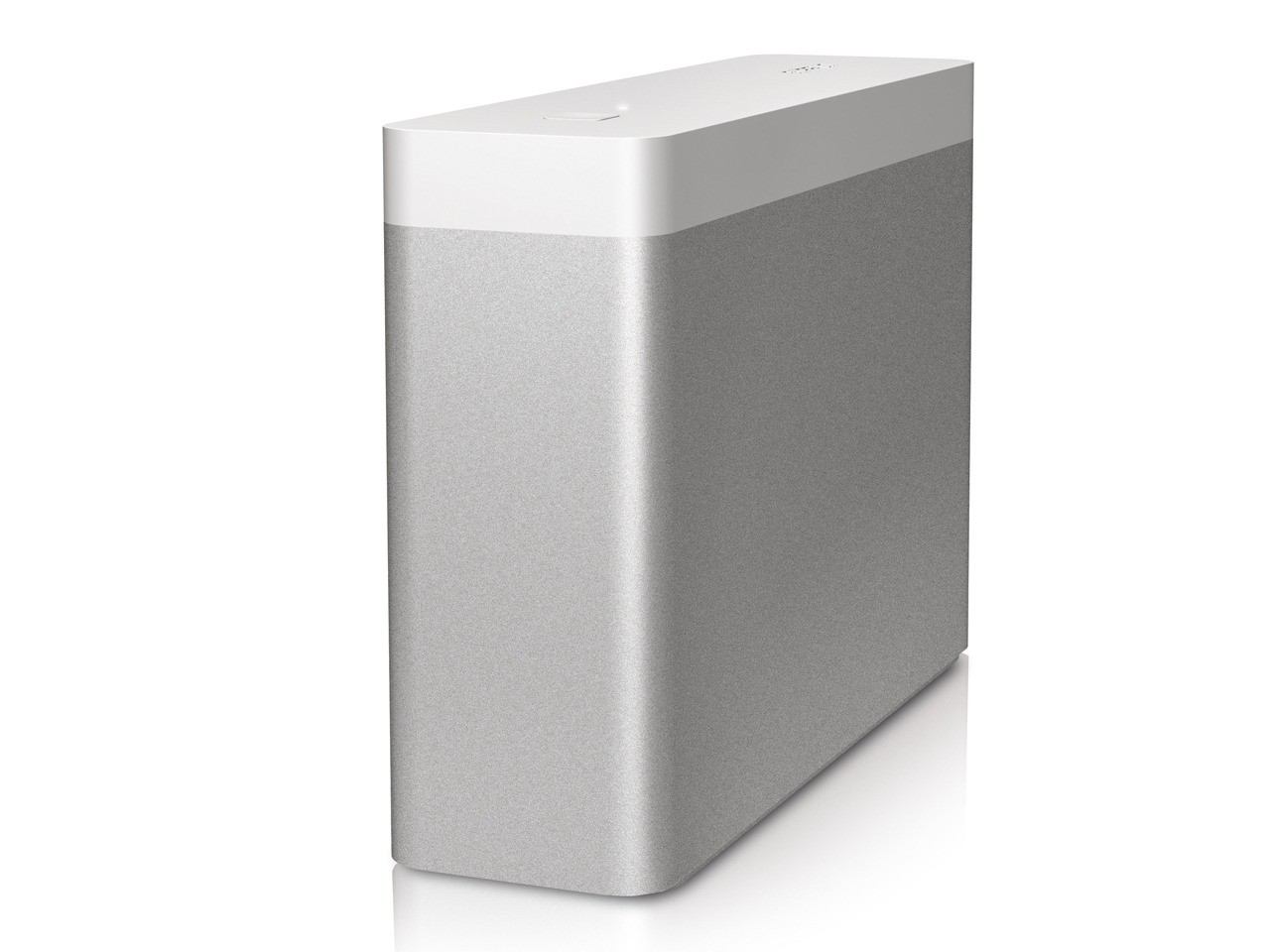 The Buffalo DriveStation Mini is quite a surprising storage solution and certainly one of the quickest first generation Thunderbolt storage solutions. The design of the DriveStation complements and goes quite well with any Mac user's desktop, and the build quality is rather solid.

Performance of the DriveStation more than exceeded my expectations, which goes to show the great choice Buffalo made by going with Toshiba SSDs. In testing, we were able to take the DriveStation well above marketing numbers and even exceeded 800 MB/s with our 4K stream RAID 0 read testing. Furthermore, the Buffalo did quite well with RAID 1; in both AJA and Black Magic, we found the drive to still touch 700 MB/s read, while write speeds hovered around 350 MB/s.

Overall, the DriveStation Mini Thunderbolt is a great solution for those that want the performance of Thunderbolt in a solid, compact device.

The Buffalo DriveStation Mini Thunderbolt in the 512GB configuration carries an MSRP of $649.99 with a three-year warranty. Current market pricing for the unit can be found below.

PRICING: You can find the Buffalo DriveStation Mini Thunderbolt (512GB) for sale below. The prices listed are valid at the time of writing but can change at any time. Click the link to see the very latest pricing for the best deal. 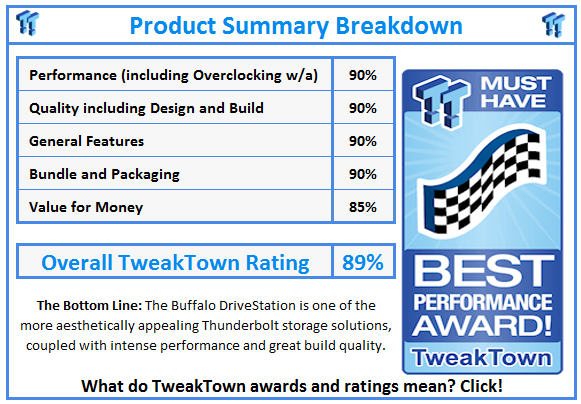