Put together four veteran character actors with a collective six academy awards under their belt, a veteran stage actor and frequent comedian, a director and writer whose filmographies are overwhelmingly punctuated with films for Disney and Pixar, along with the glittering lights of Las Vegas and what do you get? Surprisingly, one of the funniest and heartwarming comedies seen for some time, which touches on universal themes of friendship, love, and growing old. 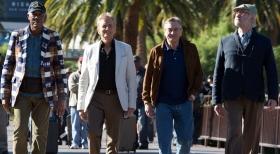 When successful businessman Billy Gherson (Michael Douglas) announces his upcoming nuptials to his partner some four decades his junior, his childhood friends Sam (Kevin Kline) and Archie (Morgan Freeman), both whose advanced years have deteriorated into mundane lives, propose a bachelor party in Las Vegas to see him off. The challenge is to also reunite the "Flatbush Four" with sole holdout Paddy (Robert De Niro), whose falling out with Billy in previous years has split the group.

Following a well-meaning misrepresentation to Paddy, the group is reassembled, albeit with animosity on clear display. However, their encounter with kindly cabaret singer Diana (Mary Steenburgen) has the potential to either settle their differences or exacerbate them. 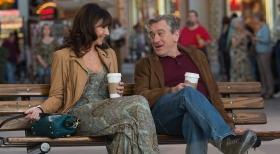 If you've had a chance to catch the theatrical trailer, you'd be excused for imagining Last Vegas as merely The Hangover for a more mature crowd. To a certain degree, you'd be right. However, Last Vegas has more laughs than the two Hangover sequels and more heart than all three combined.

Whilst it might look from the outside that the accomplished cast are somewhat wasted in an ensemble comedy, it's through their immense talent that a six decade friendship becomes a totally believable and genuine pact. What Dan Fogelman's script might lack in surprise is more than made up for by its relatable quips and intelligence. It's rather pleasant to have a comedy touch on more thoughtful life lessons, such as growing old and primal emotions such as jealousy and loss. 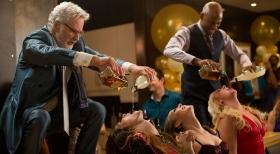 It would be remiss if I didn't address a glaring issue with the film's distribution by Universal Pictures, which comes some four months after the theatrical release of the film in the United States. Most egregiously, our release of Last Vegas also comes a month after the Blu-ray release of the film in its country of origin. This worrying trend seems to be rearing its head in Australia once again, after having (for the most part) been rectified in recent years.

Other recent examples such as The Monuments Men and The Lego Movie, even despite its Australian production, join Last Vegas with an arbitrarily staggered release strategy. In this day and age of print-less, digital distribution, there is no excuse whatsoever to treat Australians as third-class citizens.

Whilst I don't for a single second advocate piracy on any level, for the sheer unavailability of a product in another market, it's hard to feel sorry for studios that treat their consumers with such disdain. 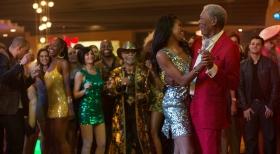 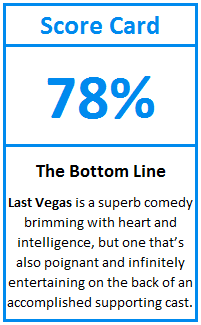