A surprise hit for the joint French/ U.S. studio Illumination Entertainment in 2010, Despicable Me has become a lucrative franchise for the fledging studio, with very strong home video sales, this sequel and a planned 2014 spin-off movie Minions incoming. With Despicable Me 2, the filmmakers focus on the very best elements from its predecessor, that is; the comedic opportunities provided by the adorable Minions and the frequent use of slapstick comedy that the littlies love so much. 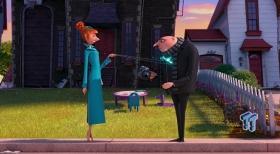 Having been drafted by the head of the Anti-Villain league (Steve Coogan) to investigate the threat of a new super-villain who has obtained a serum that transforms the recipient into a mindless mutant, Gru (Steve Carrell) must balance the demands of sole parenthood and his own loneliness, with the demands of a life of villainy that he has turned his back on. When Gru's minions are kidnapped and his assistant Dr. Nefarious (Russell Brand) abandons his employ, Gru will need to rely on his own cunning to solve the mystery of the phantom villain, whilst keeping the family unit together.

Despicable Me 2 does precious little to shake up the formula of the first film with the entire original cast including Steve Carrell, Russell Brand and Miranda Cosgrove all coaxed back into returning, while comedian Kristen Wiig joins the cast as Gru's off-sider and potential love interest. The fan favourite Minions, whom now sport more individualized personalities feature much more significantly than in the first and provide much opportunity for mirth, but while it must be said that the script plays far more to a younger age than say, your average Pixar film, there is still just enough adult laughs to keep parents interested. I also dare say that the film will play very well with young girls, with a carefully placed young love story thread.

Despicable Me 2 is certainly a fun and lightweight laugh and I dare say that quite a few copies will find themselves under Christmas trees this holiday season.

Despicable Me 2 is presented in the aspect ratio of 1.78:1, encoded with AVC MPEG-4 compression.

Despite what seems like an incredibly generous budget of some $76 million, it's a little bit of a surprise that the animation is adequate, but fairly unimpressive and certainly doesn't hold a candle to the likes of Pixar, or even DreamWorks. Of course, kids hardly care about technicalities such as bump mapping and texture resolution, but I can't help but feel how... cheap and plastic it all looks. Still, this more simple animation encodes with relative ease, and coupled with a consistently high bitrate means there is nary an artifact to marr a very good image. 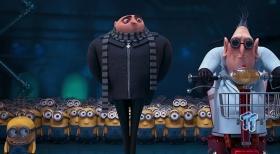 As expected, the design of the film is conducive to efficient MPEG-4 encoding, with solid blocks of color and detailed lines. Coming from a newly minted and pristine digital intermediate, there are no film to video artifacts of other encoding based nasties to speak of. For all intents and purposes, this is a flawless transfer, which reaches the limits of current Blu-ray specifications.

I remember in the early days of 5.1 mixing for animated films that the modus operandi was to be as conservative as possible in order to not scare the littlies. Despicable Me 2 proves again how outdated that rationale was.

The front and rear soundstages are engaged equally, providing an extremely immersive, and aggressive track which doesn't forego any sonic opportunities. The low frequency mini-channel is frequently engaged and holds little back. Lip syncing is quite good and I didn't detect and transfer induced errors.

Overall, an impressive track which may surprise many a home theatre aficionada. 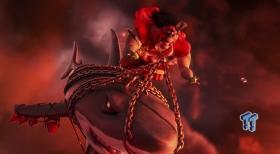 Despicable Me 2 is a little light-on for extra features, and what we do have is geared very much towards a much younger audience. Those seeking information on the complex procedural animation and mathematical processes that go into producing a final computer generated image would best look elsewhere, but for a younger audience, another 20 minutes of Despicable Me is no doubt a huge draw card. Let's take a look.

First up is the Audio Commentary with directors Chris Renaud and Pierre Coffin, which only the most dedicated of film fans, or those wanting some insight into the technicalities of CG animation will seek to listen to in totality.

Following on from the home video release of the first movie, we have an additional Three Mini-movies, which total around 20 minutes of footage. Most revolve around the minion characters, who I feel work much better in short bursts as seen here. Younger ones will love these, and I can admit to entertaining more than a few chuckles. 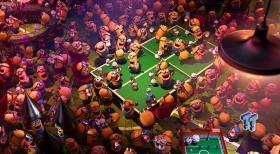 The bulk of the remaining extras consist of few brief featurettes, including Gru's Girls, which takes a look at the voice cast of the emotional anchors of the film, A Gru-some Transformation takes a look at the character development of the once feared adversary, whilst The Minions and the Evil Minions provides some more background on the fan favourite characters. Finally, El Hombre Malo explores one of the new characters to the franchise, whilst Gadgets Galore takes a look at the more absurd Bond-on-steroid weapons, which have become a hallmark of the series.

Finally we have a solo Deleted Scene which runs a scant one minute.