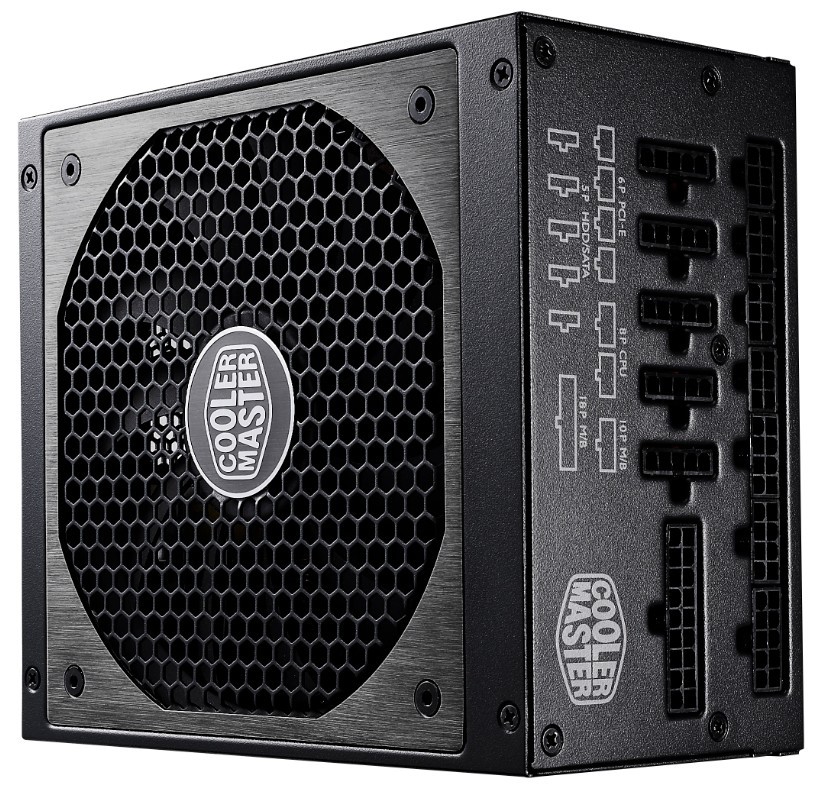 Over six months ago, Cooler Master launched their V-series of power supplies. The V-series is still their current flagship power supply. As such, we thought it would be worth our time to find out how one of the lower wattage V-series units compared to the higher wattage units.

After digging into the V700 a little bit, we found it to be of the same manufacturer, which is Seasonic in this case. This means that we probably won't be seeing too many differences aside from wattage, cables and connectors. If that is all we find, that means the V700 will be a major win for consumers since the V1000 is such a great unit.

Let's just dig into this thing since we already know some of what to expect from this power supply. 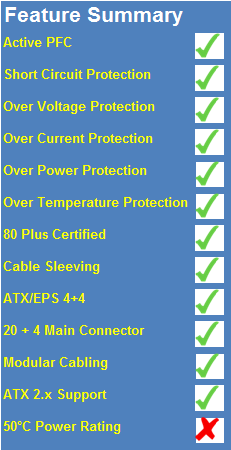 Just as we saw with the V1000, the Feature Summary is almost full of green checks, but misses it by one item. All protections are present including SCP, OVP, OCP, OPP and OTP. The V700 features fully modular cables, all of which are fully sleeved. The V700 is rated for 80 PLUS Gold efficiency, but unfortunately it is not rated for 100% continuous output at 50C. Cooler Master does rate it for to do so at 40C though, which is important to know.

Cooler Master has an MSRP of $159.99 on the V700. This is a little bit higher than what we expected, but Newegg has the power supply for sale for $119.99 and $79.99 after rebates. Even without the rebates, that makes this a very attractively priced unit for consumers as it places right in the middle of about a dozen different units with nearly the same features. Cooler Master backs the V700 with a five year warranty. 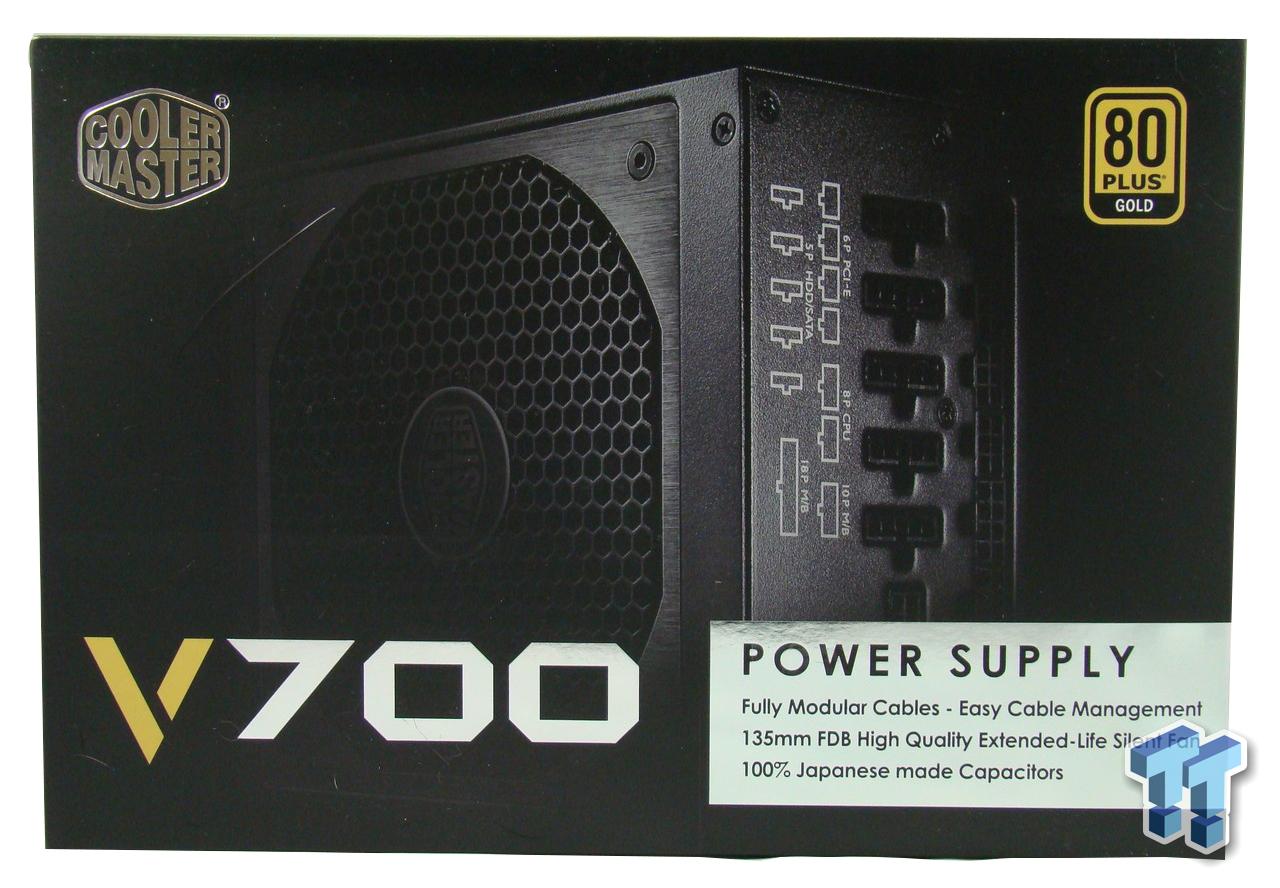 Once again, little has changed, this time with the packaging. The same packaging is used with the model number being the only thing changed. 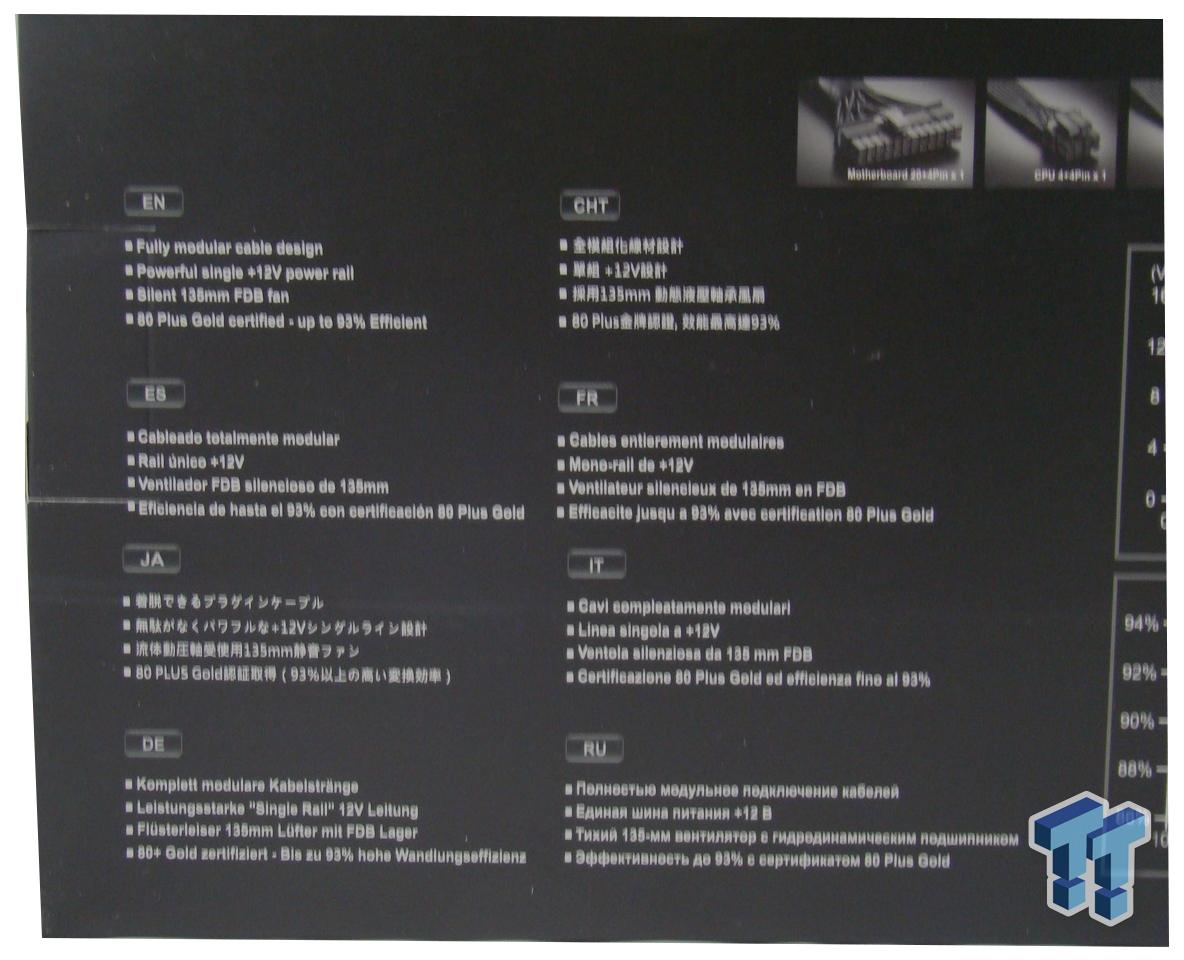 There isn't much to go by on the left half of the back as it only gives us four bullet points in many different languages. 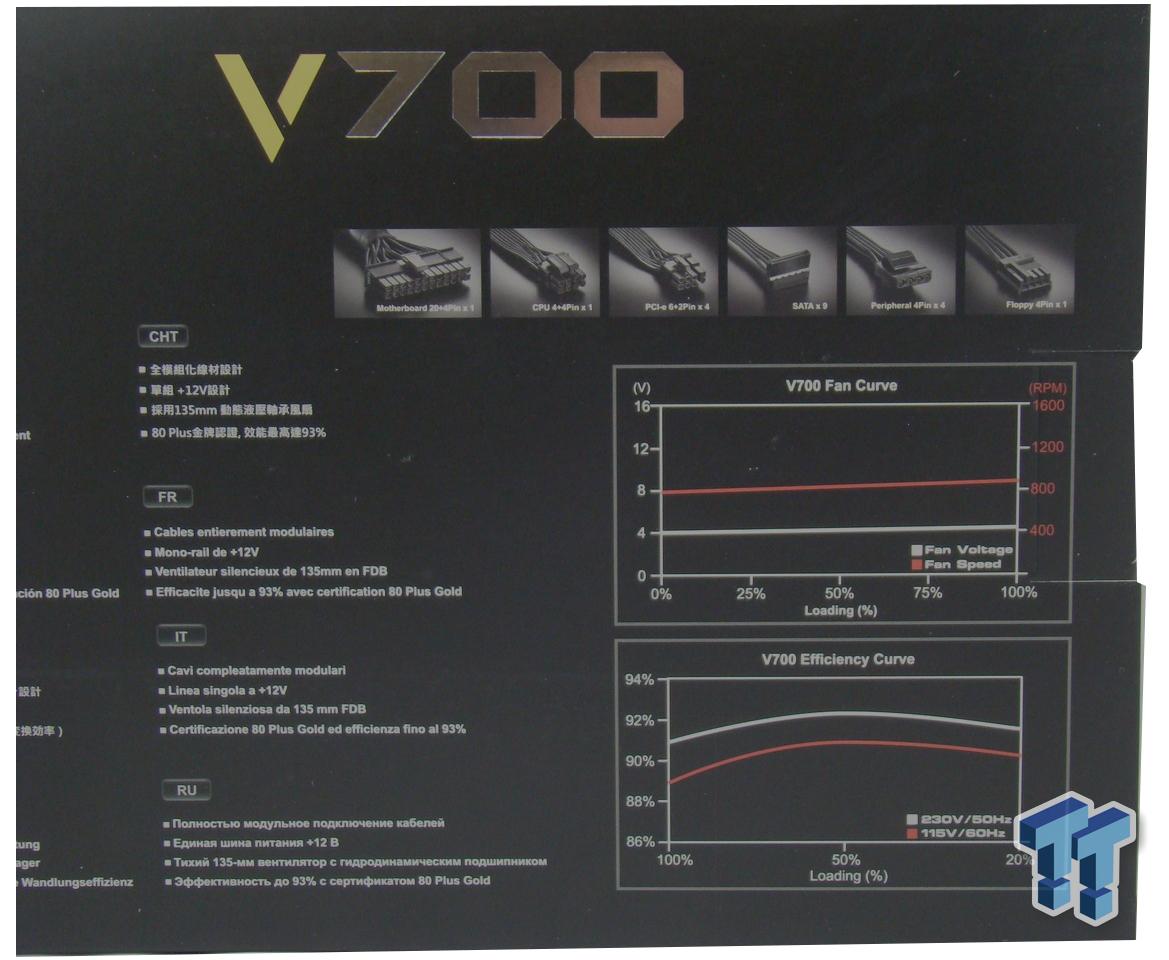 The right half gives us a little more with a pictorial view of the connectors, a fan chart showing fan speed and fan voltage in relation to the load of the power supply, and an efficiency curve for the power supply. 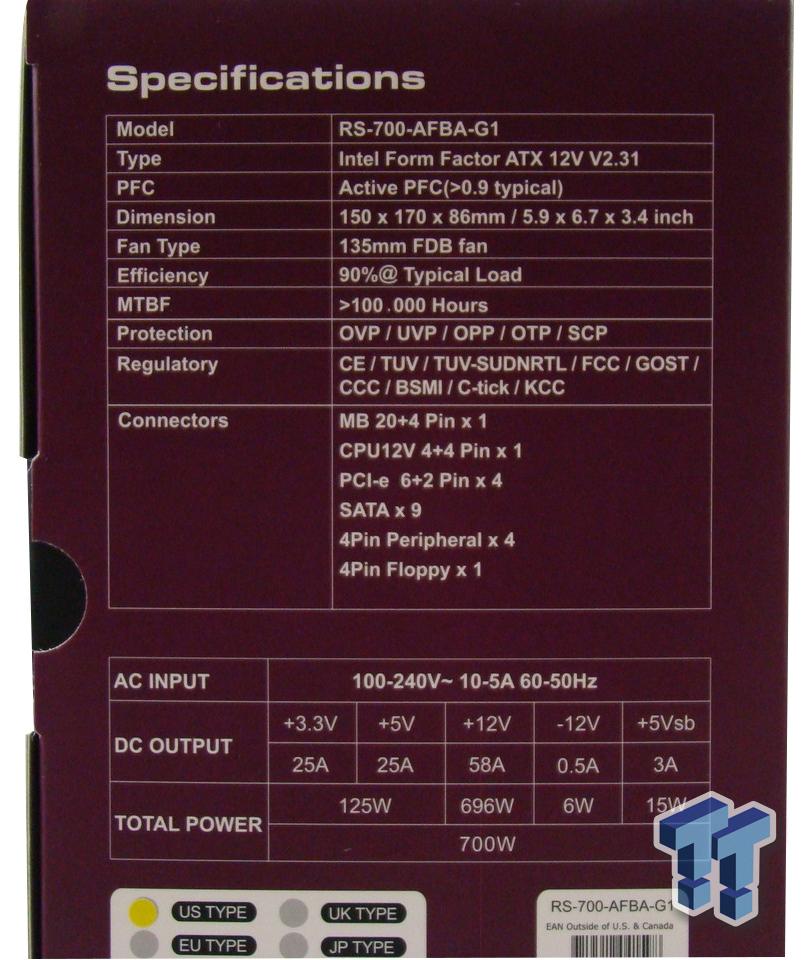 Cooler Master gives us some specifications on this side of the box. The other sides contain no useful information. 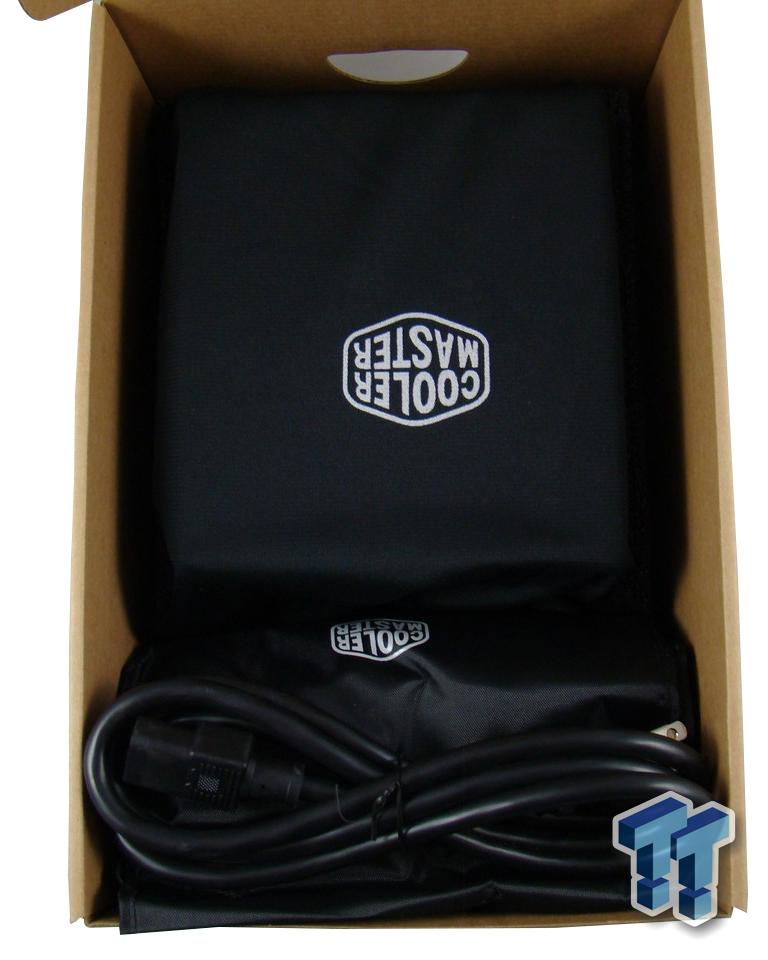 An inch of foam surrounds the power supply on all sides. All modular cables and accessories are contained inside the bag towards the front of the box. 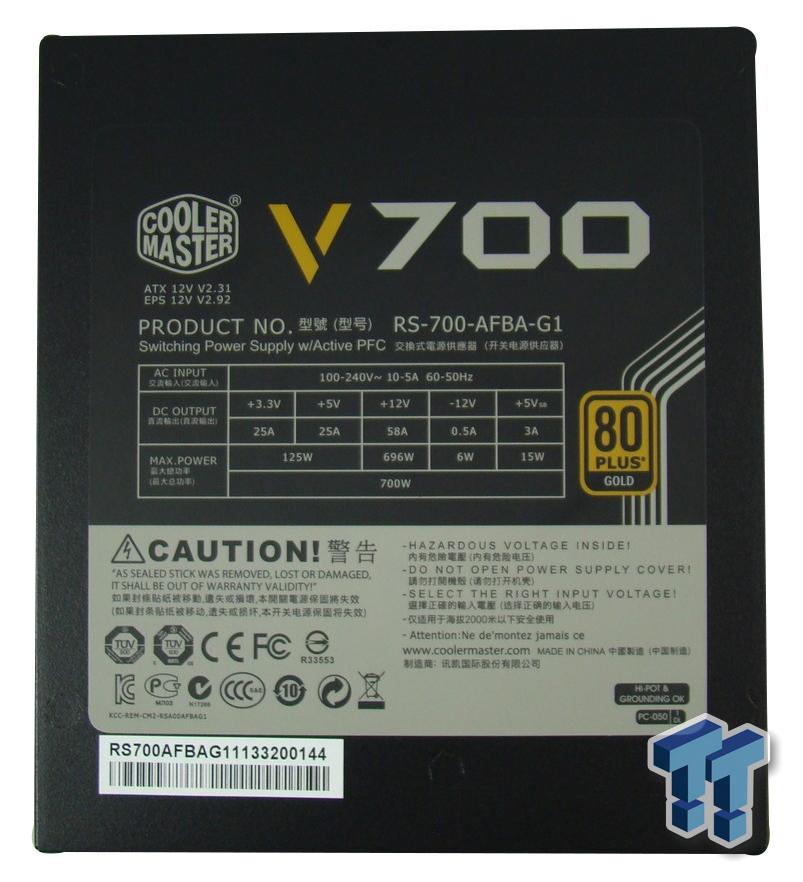 The I/O specification label is located on top along with the serial number. We can also see the matte black finish on the V700. 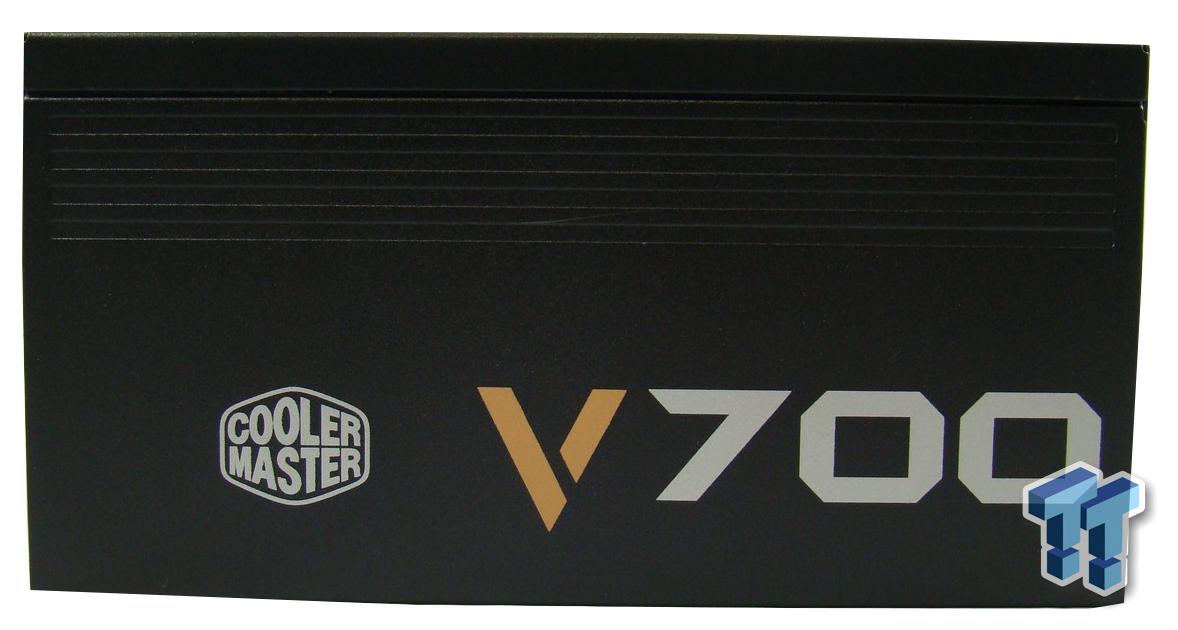 Both sides have the same logos on them with the opposite side being inverted. 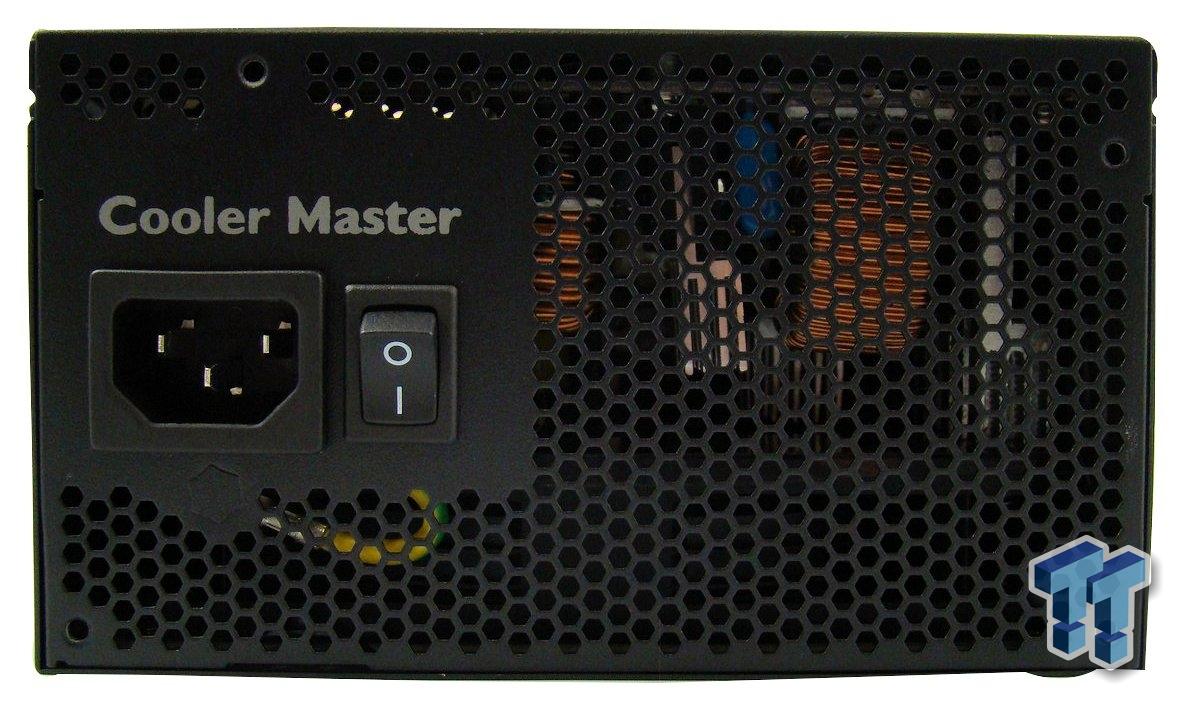 We have the on/off rocker switch along with AC input in the back. The honeycomb mesh grill takes up the remaining space except for the little bit that was left to show off the Cooler Master name. 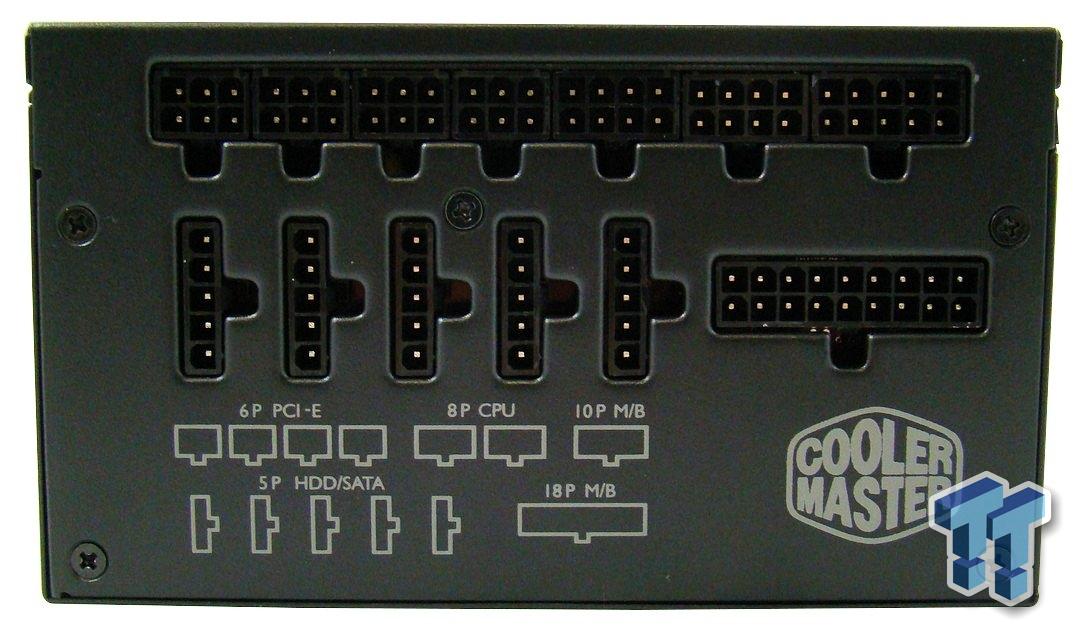 The front has all of the modular connections labeled clearly. 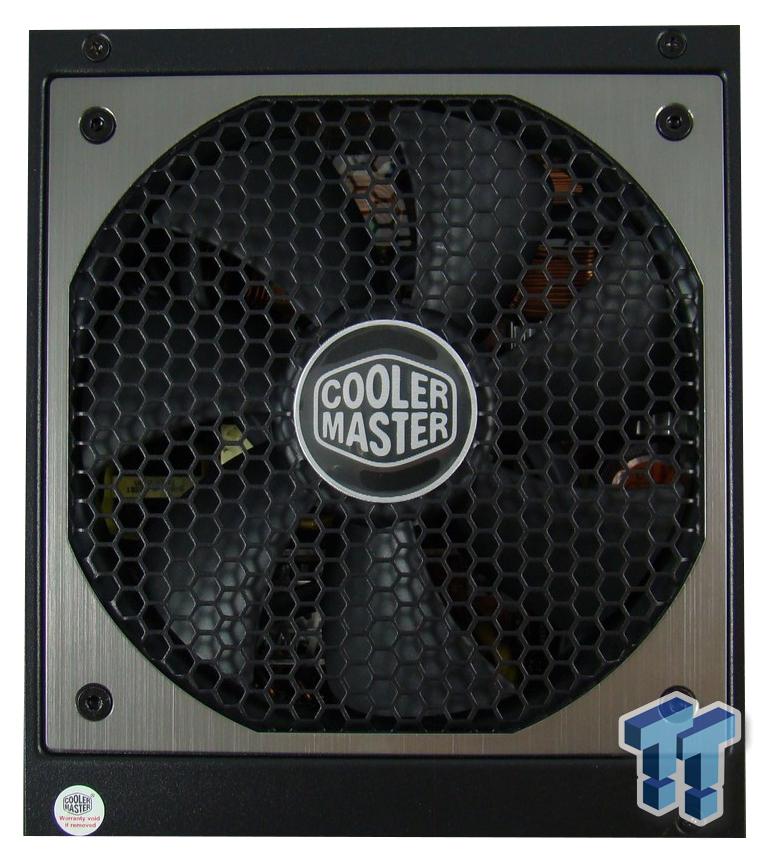 Cooler Master uses a honeycomb mesh grill to protect the fan on the bottom. It is surrounded with a brushed nickel plate to break up the monotony of all black. 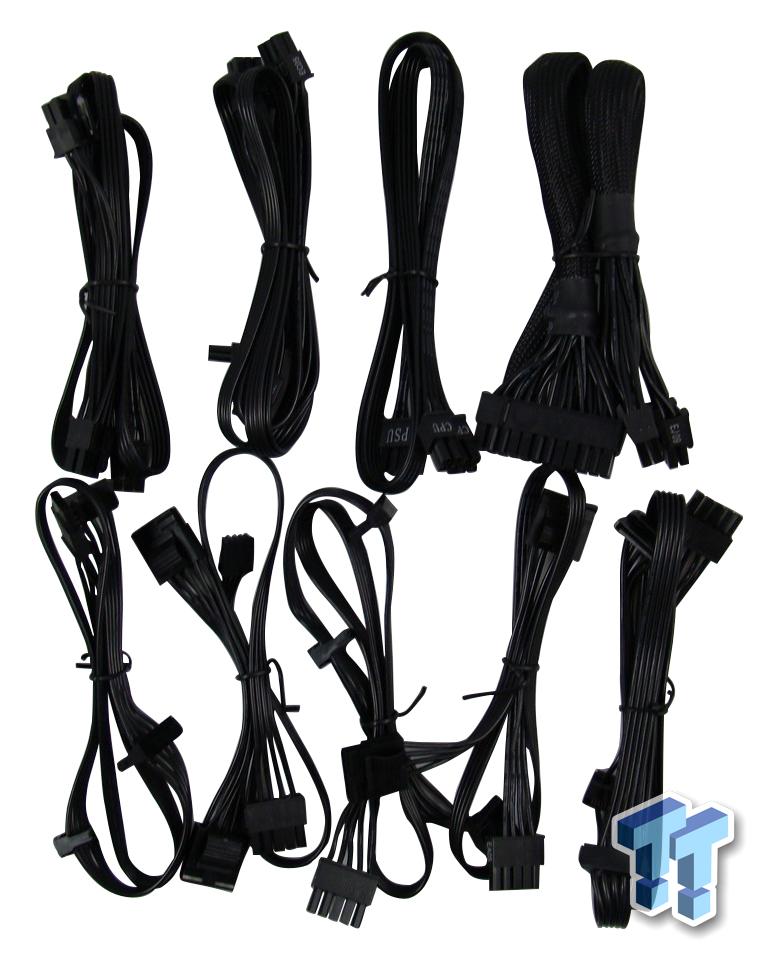 The V700 is fully modular. All cables except the 24-pin are of the flat ribbon type. The 24-pin is sleeved with nylon mesh. 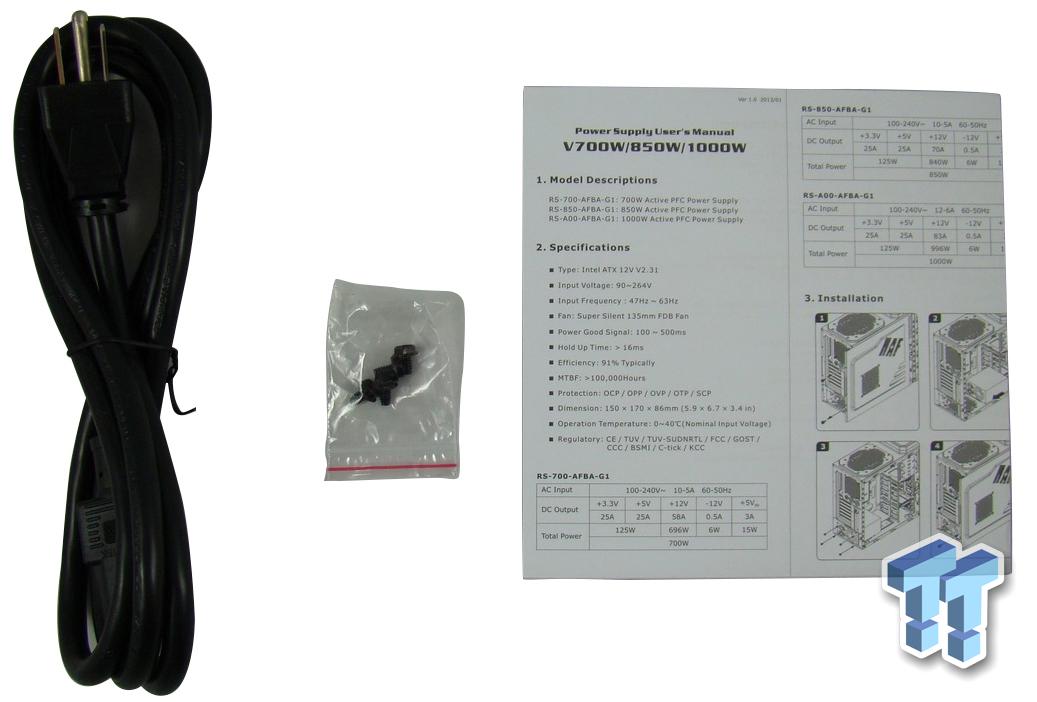 Finishing off what is inside the box is the AC input cord, mounting screws and manual.

Cooler Master keeps the cable arrangement short and simple. All cables are modular including the 24-pin and ATX 4+4. There are two PCI-E cables included which each have a pair of connectors on them. Peripherals are handled via five cables, three of which are for three SATA devices, one for two Molex devices, and one more for two Molex devices with a FDD connector at the end. 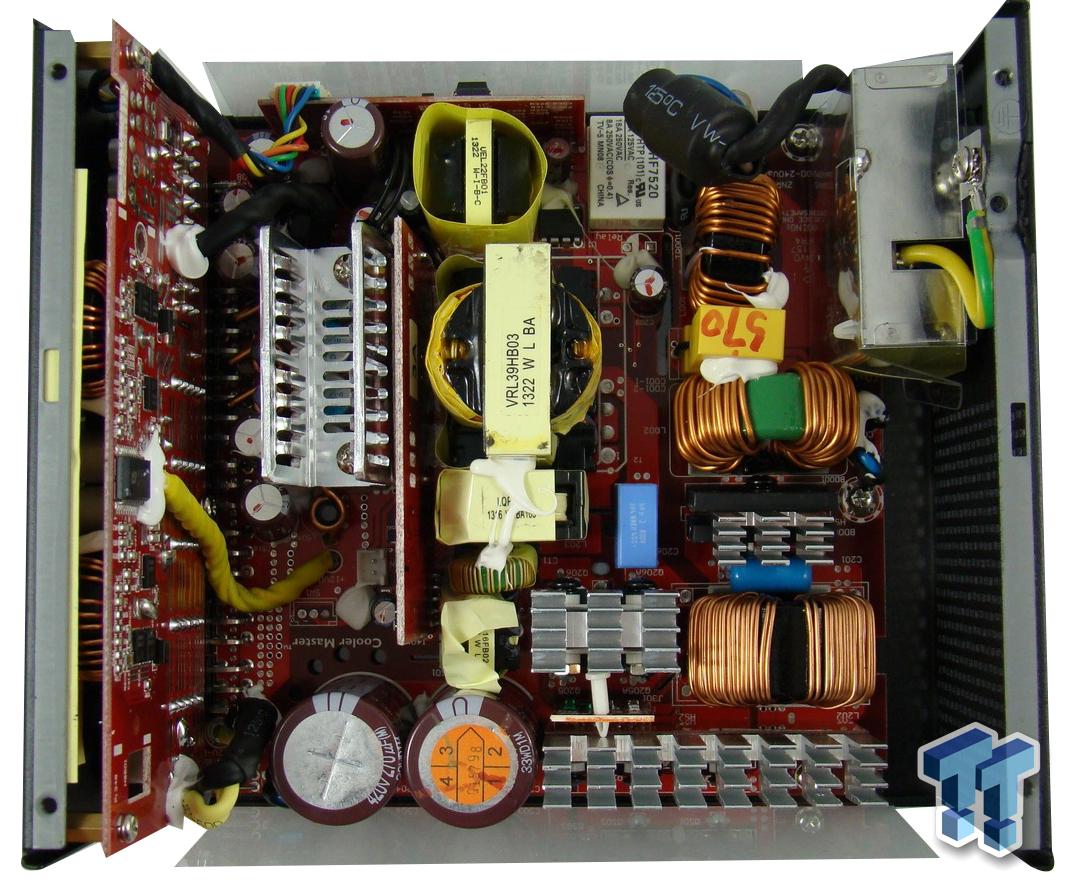 Cooler Master uses plenty of passive cooling on the inside of the V700 and is identical to what we saw with the V1000. 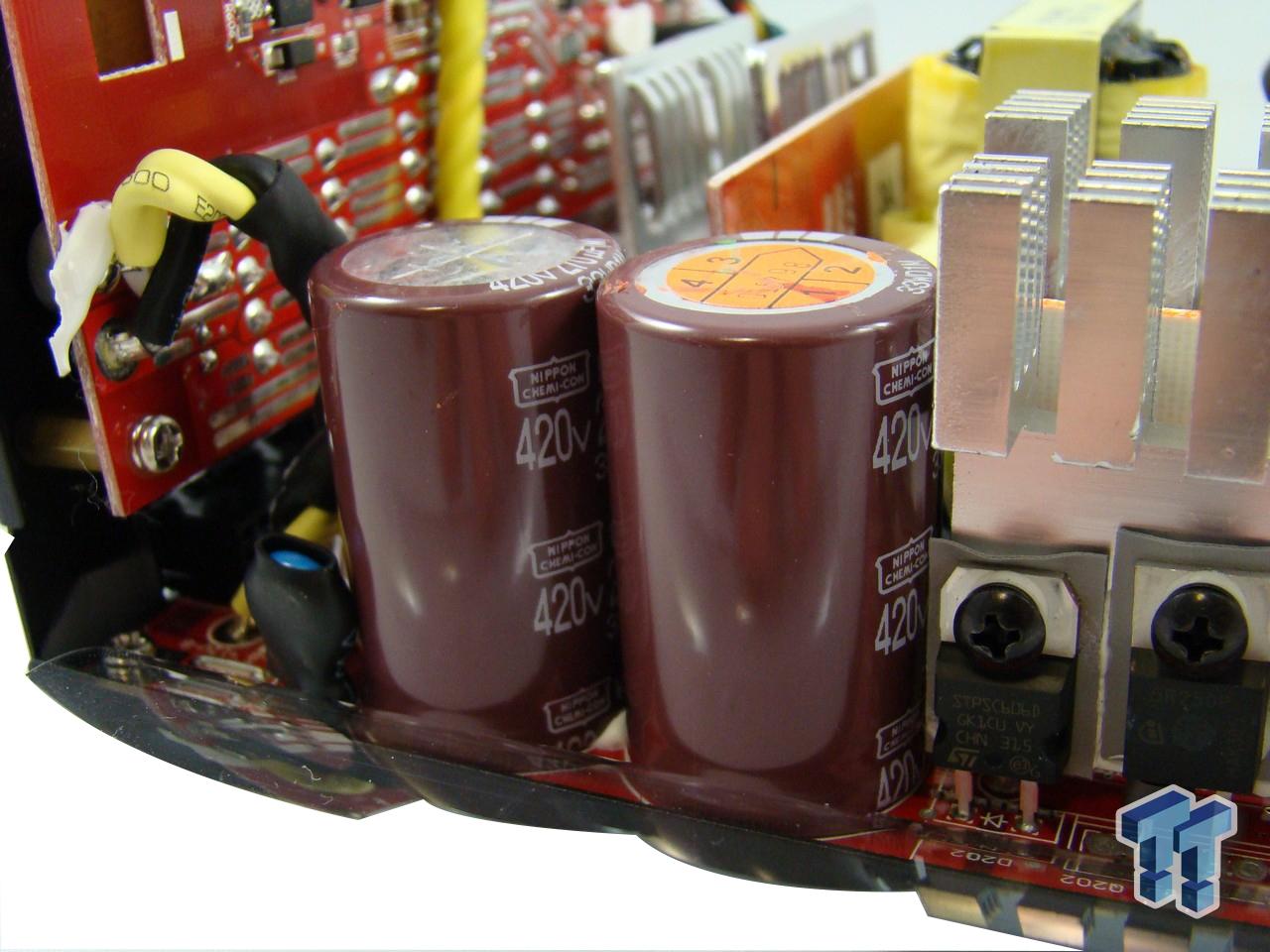 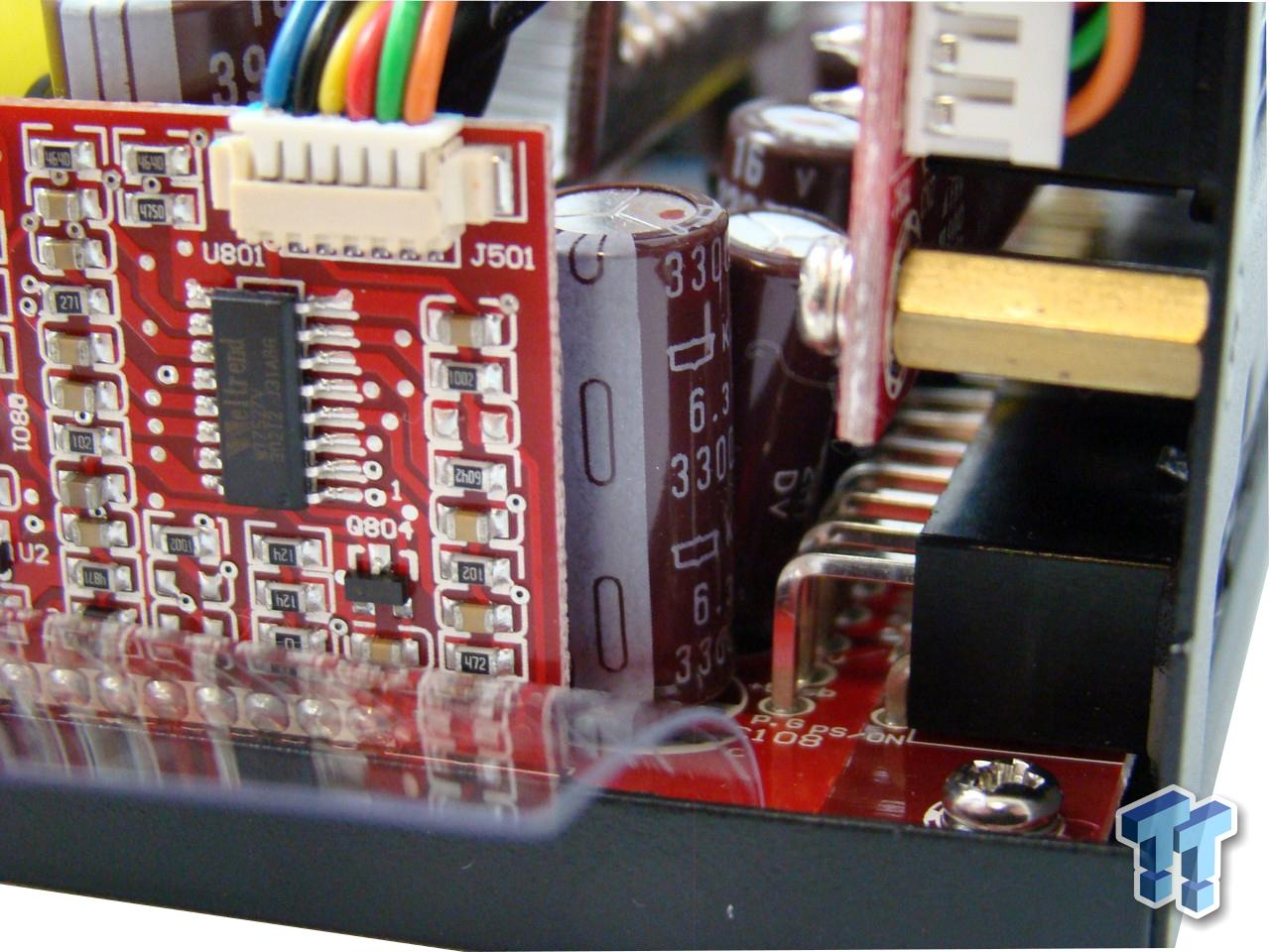 The secondary side is filled with more Chemi-con caps. 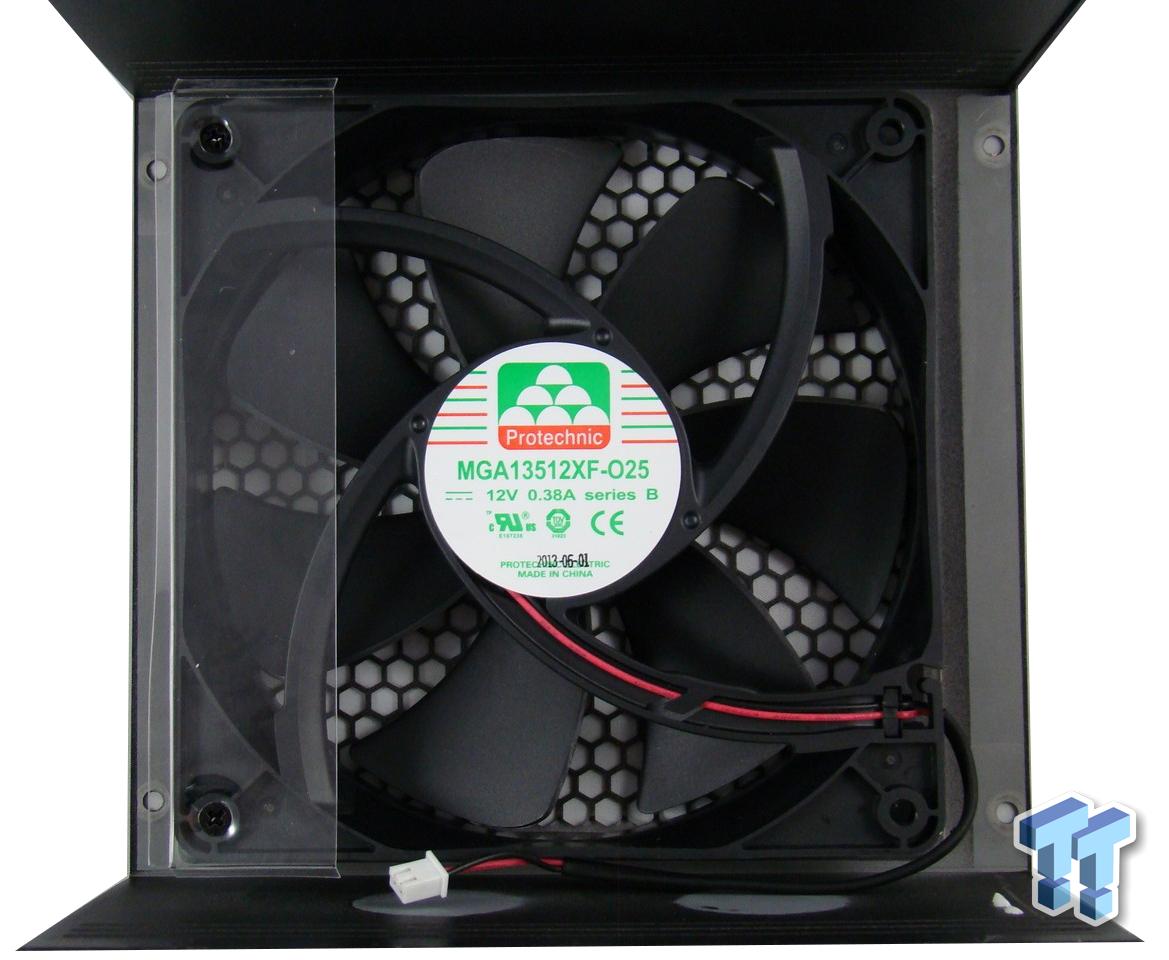 Cooler Master uses the Protechnic MGA13512XR-O25 fan for the active cooling inside the V700.

The tests performed are based around six conceivable setups that are out there and progressively load down the PSU up to the power supply's limits or 1000W, whichever comes first. Since our test equipment's limits are higher than that of the Cooler Master V700 700W power supply, we can test it to the maximum.

DC Output quality for the Cooler Master V700 700W was good and well within specifications. During Test 1, we saw 15mV of noise on our scope. When we increased the loads in Test 3, the ripple climbed to 28mV at a little over half load. During Test 5 under a load of 700W, the oscilloscope showed a maximum of 33mV on noise on the 12V rail.

The V700 is the third power supply in the V-series that we have looked at from Cooler Master. It is also the last one in the series for us to look at. Both the V1000 and V850 proved to be fantastic power supplies. Considering the V700 is built on the exact same platform the other two are built on, there is no reason that it shouldn't perform just as well as the other two in the series have.

That is exactly what has happened with the V700. The performance is spectacular and mildly better than what we've seen so far. The V700 has superior voltage regulation with all rails staying within 1%. Not too many units have ever been able to accomplish this.

The noise suppression on the 12V rail wasn't quite as good, but it is still what we consider very good and not something that we would ever even bat an eyelash at. The efficiency is even right where it is supposed to be for the Gold certification that it holds.

Sweetening the deal even more on this already great power supply is the price. It may have an MSRP of $159.99, but it can currently be had for $79.99 after rebates. With the incentives that Cooler Master is throwing around and the great performance from this unit, it is very clear that the V700 is going to be a favorite for many segments of the PC market as it is cheap enough for a budget PC yet strong enough for a most dual GPU gaming machines.

That is a hard combination to beat and I suspect that it will be for some time. 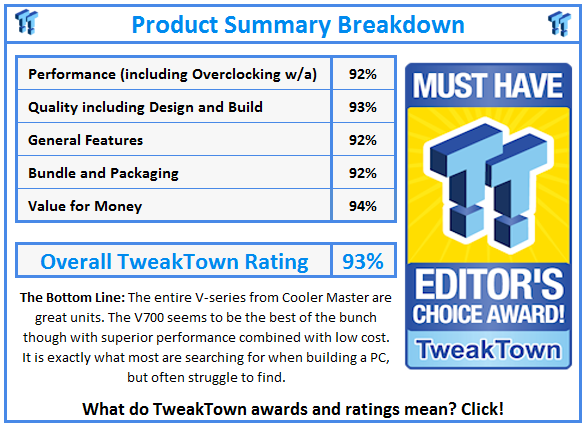