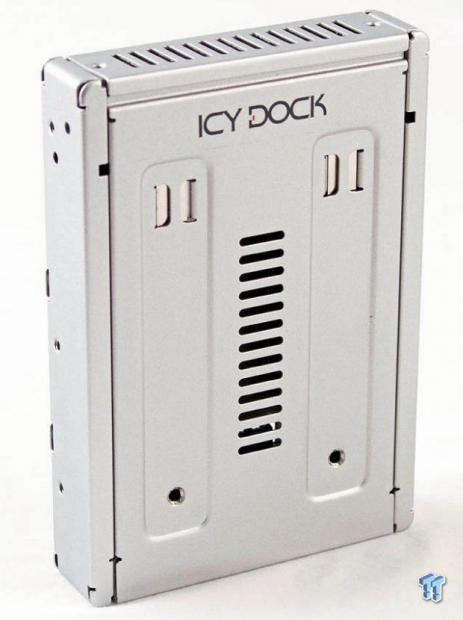 The migration to smaller 2.5" HDD's and SSD's has created a need for quality converters for enterprise applications. In many cases, extensive existing infrastructure would require a large investment to replace, and that is not always an option.

Utilizing SSDs in the server has become far more commonplace as complex caching and tiering systems are becoming more widespread. Placing SSDs on the other end of a networking connection in NAS and SAN environments is not always the best option. The key to getting the most performance out of flash solutions is to keep the SSD's as close to the processor as possible, maximizing performance, and keeping latency as low as possible.

The same approach with more energy efficient 2.5" HDD's also necessitates the use of drive bay converters to continue the use of existing servers.

In order to deliver a solution that allows the easy placement of the SSDs into the server requires a product that does not hamper the performance of the underlying storage. Many of the available drive-bay converters on the market can hamper the performance of the HDD or SSD, defeating the purpose of keeping the flash in the server in the first place.

The Icy Dock MB982IP-1S-1 is designed to provide that easy conversion from a 2.5" to a 3.5" drive with absolutely no impact to the performance of the underlying storage solution. The design provides essentially an unaltered connection between the SAS port on the server and the SSD or HDD. 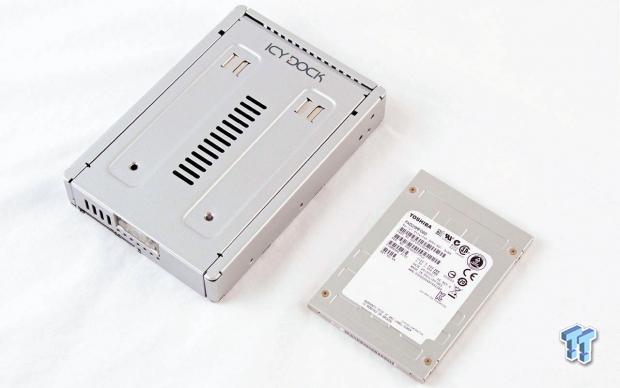 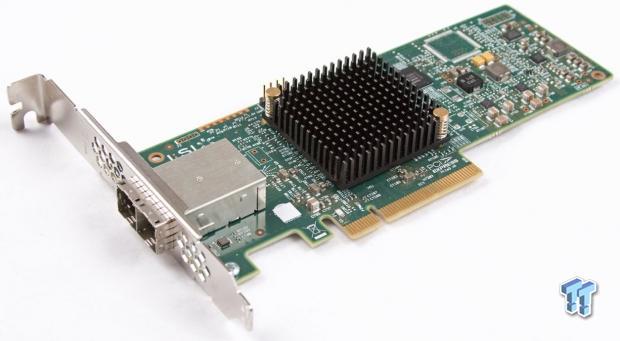 Pairing this with the LSI 9300-8e, the only publicly available 12Gb/s HBA, creates a test situation that is rather unfair for the Icy Dock converter. When the Icy Dock MB982IP-1S-1 was designed, the 12Gb/s SAS specification was still on the horizon, and there was virtually no means of determining if the converter can handle the massive speeds of the 12Gb/s specification without interfering with performance. 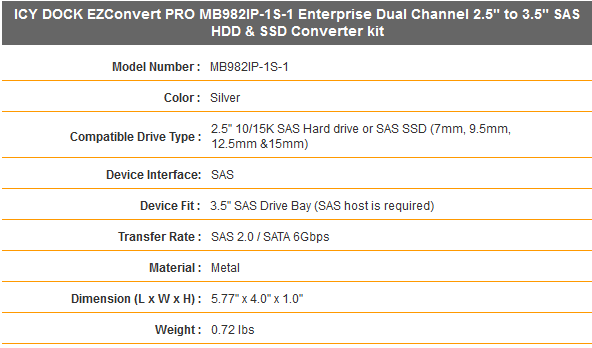 The Icy Dock converter comes in two versions, one for consumer, and one for enterprise applications. The SAS version we are testing today comes with a wide compatibility for any 7mm, 9.5mm, 12.5mm or 15mm 2.5" SAS drive, be it an HDD or an SSD.

The solid metal construction actually is rather light, weighing in at a mere .72 pounds. This light weight detail is surprising considering the heft and rugged construction of the unit.

Drive installation is tool-less, there are no screws required. This is accomplished via the Icy Dock True Fit system, which we will take a closer look at in the following pages. 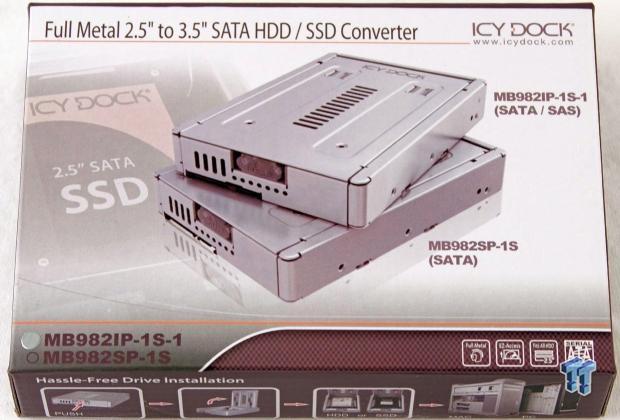 The front of the cardboard package shows images of both the SAS and SATA versions of this product. Icy Dock has a whole range of solutions for customers, and there are both plastic and metal versions available for typical SATA usage. 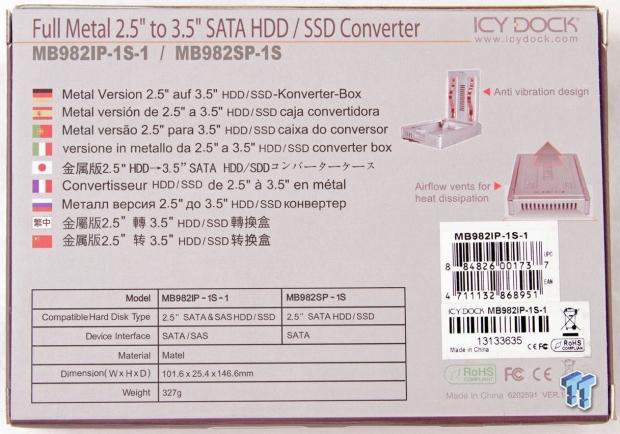 The rear of the package highlights the specifications of the converter. 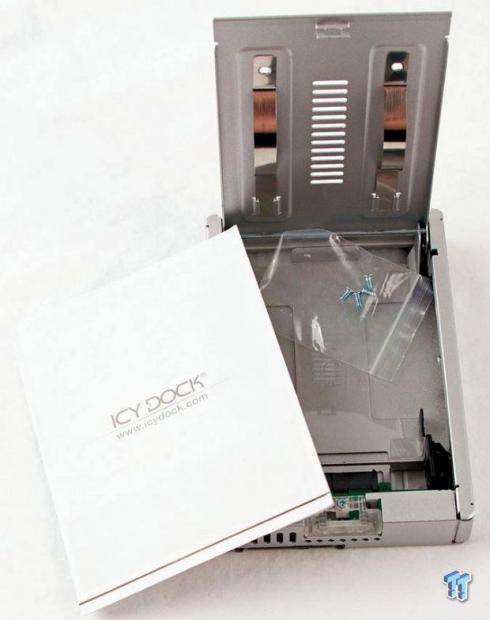 The drive bay slides out in a bubble wrapped envelope. Once unpacked, we find the converter, instruction pamphlet and the screws necessary for securing the converter into the case. The converter does not require any fasteners for installation of the drive into the converter itself. 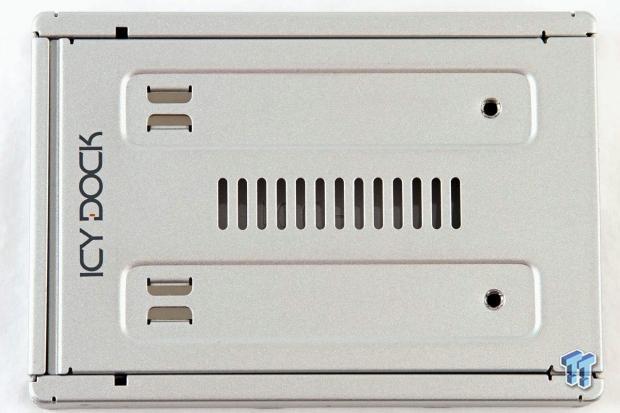 The case is attractive, sturdy and made of high quality steel. With the rugged and high quality construction, it is surprising that the case is so light, weighing in at a mere .72 pounds. 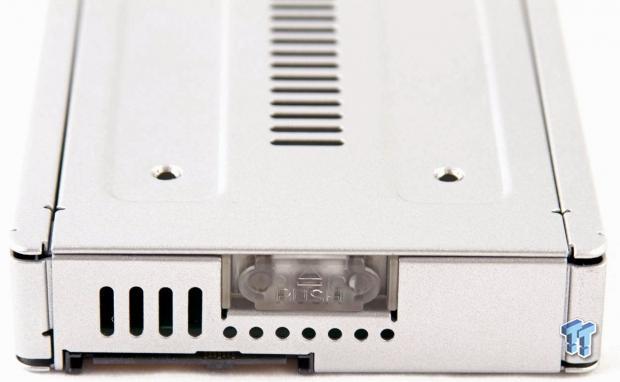 The front of the converter has a plastic button that when pushed releases the top of the case. We also observe the slots on the top and front of the case that allow for excellent thermal dissipation characteristics. 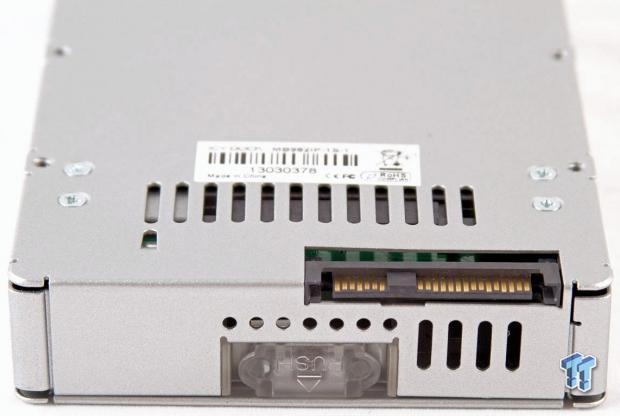 Flipping the case over reveals the SAS connection that is compatible for all versions of SAS, including the ultra-fast 12Gb/s SAS that we are testing with today. We also note another set of ventilation slots on the bottom of the case as well. 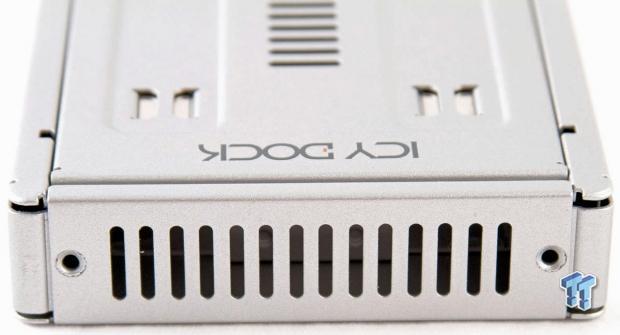 The other end of the case also has a long row of ventilation slots, allowing airflow through the converter to cool the drive located inside. 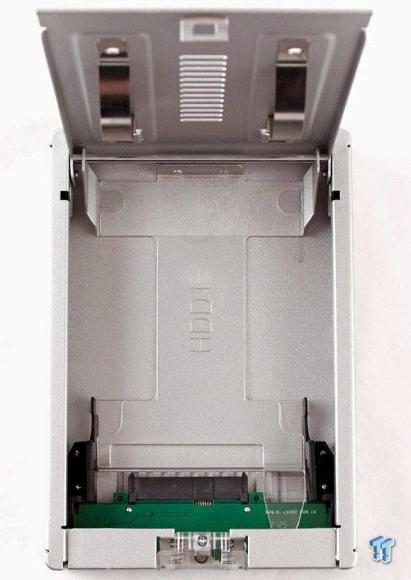 Once the case is opened, we can observe the PCB. This provides a straight-line connection through to the drive. There are no chips or logic devices placed between the drive and the SAS connection, enabling the converter to provide pure performance with no impact. 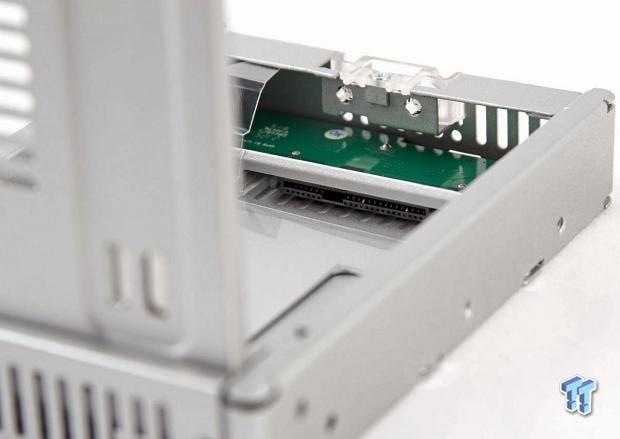 Looking from another angle reveals the internal SAS connection, nestled underneath a guide rail. 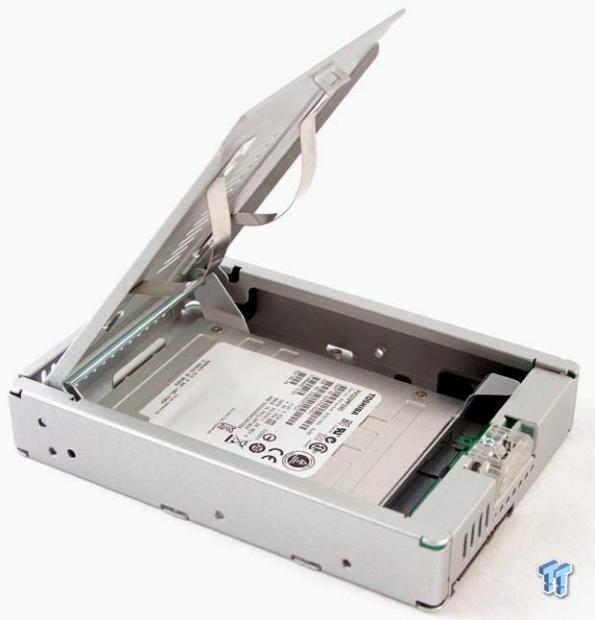 The SSD fits nicely into the converter, but leaves a large gap above the SSD. This is due to the SSD being only a 7mm design. The converter fits all drive thicknesses up to 15mm. 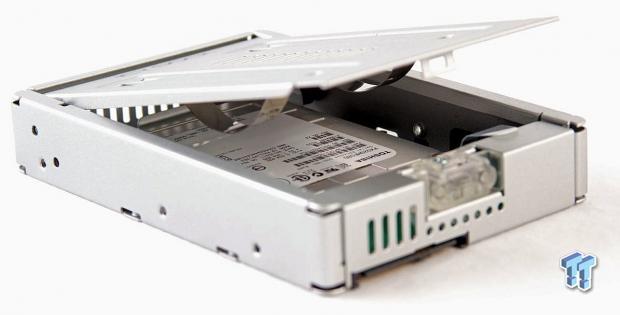 As we close the case over the SSD, we can see that the thin curved metal strips will hold the SSD in the case firmly. These strips create what Icy Dock refers to as Smart-Fit technology. This system works beautifully, securing the SSD into the case snugly, without damaging the surface of the drive. The snug fit protects against vibration in multi-drive deployments, and compresses enough to hold the wide range of drive sized supported by the Icy Dock.

The installation of the drive does not require any fasteners, which is bonus when deploying a large number of converters. Another key aspect is the sliding action of the converter. As the lid of the Icy Dock closes, the drive slides forward and mates to the SAS connector. This easy method works smoothly and without issue. On cheaper converters, we have suffered from broken SAS and SATA connections due to misaligned connectors. The Icy Dock provides one of the smoothest actions we have experienced with this type of solution. 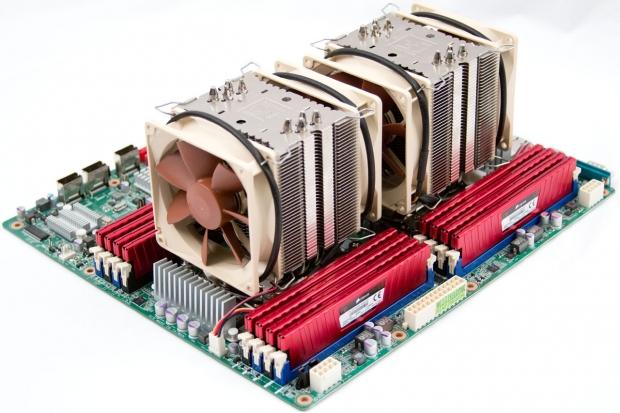 For this test, we are utilizing our fastest server to test the performance of the Icy Dock drive bay converter. We test the Toshiba PX02SMF080 with the converter, and directly attached to the LSI 9300-8e. 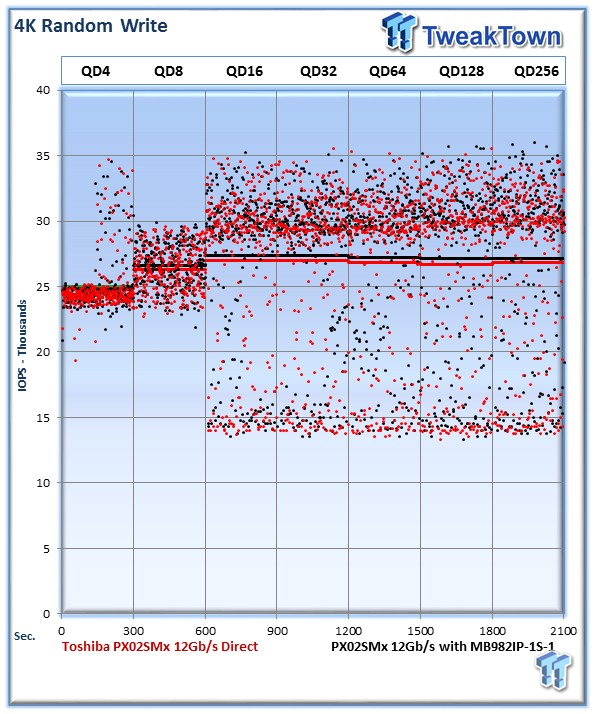 We have overlaid the results of our random 4K write testing to illustrate the performance with the converter and a direct cable connection to the HBA. Each dot represents performance during one second of the test, and we record data for five minutes for each Queue Depth. This method allows us to measure performance variability with a high level of granularity. We can see that the majority of results are overlapping, and the performance remains consistent both with and without the converter.

The lines represent the average speed during the measurement window. We can see that the SSD actually has a faster speed with the converter, but a word of caution. The converter does not make the SSD faster, but allows the SSD to perform very well within its normal range of performance. Small differences such as these fit within the +/- tolerance of 5% for a typical test, as flash solutions tend to have a bit of variability, even in steady state conditions. 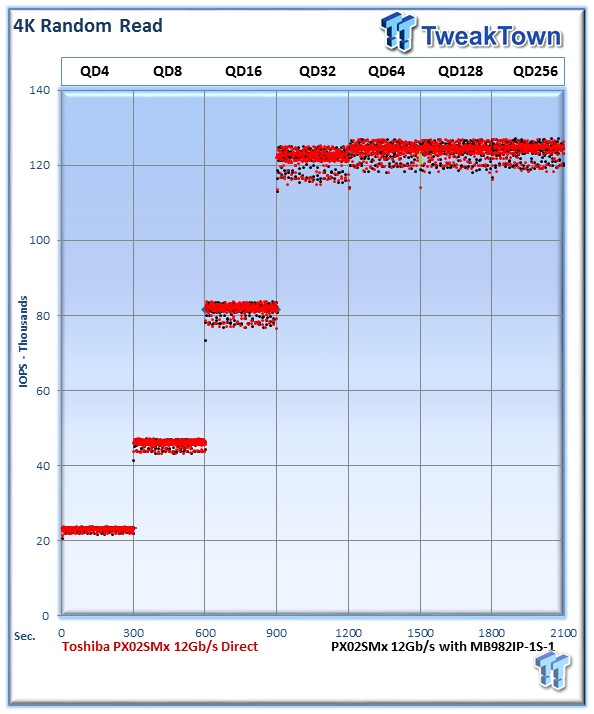 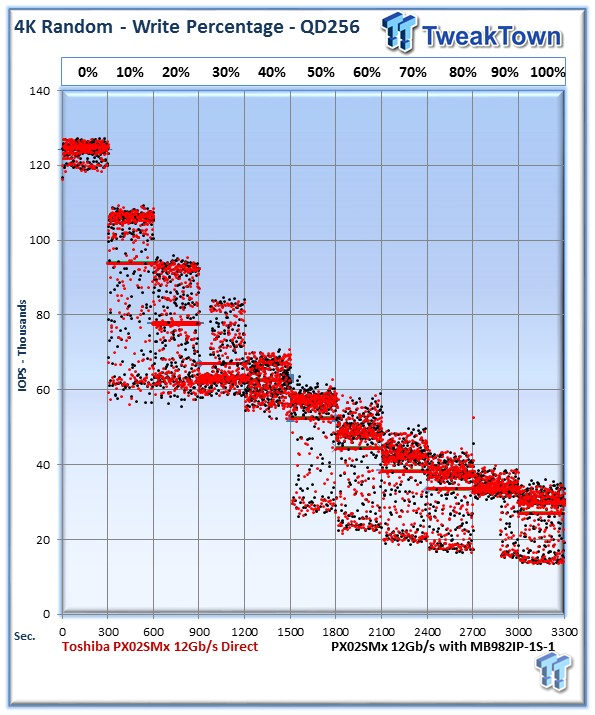 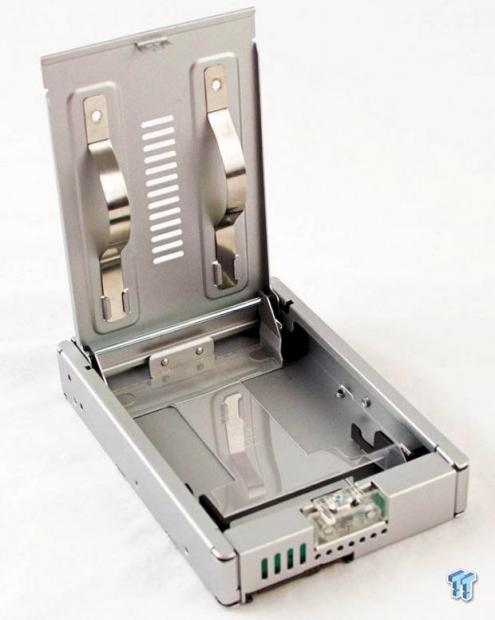 The Icy Dock 3.5" to 2.5" drive-bay converter features a high quality construction designed for ease-of-use and drive protection. The sturdy steel construction provides an extremely tough exterior that will protect the drive inside from any of the typical bumps and scratches experienced during installation.

The Icy Dock Smart-Fit technology holds the drive snugly, regardless of the thickness. This system protects against vibration during use, and also does not scratch or mar the surface of the drive. We have used several adaptors in the past that can actually leave scratches and marks on the exterior of the drive. While these small marks only affect the aesthetic quality of the drive, they certainly are not desirable. The Icy Dock Smart-Fit system holds the drive snugly, without damaging it. A neat aspect of the Smart-Fit technology also is the lack of a need for fasteners to install the drive - this simplifies installation tremendously.

When the drive is placed into the converter, the user also does not have to worry about lining up the SAS port. The mating of the drive to the SAS connector happens through an automatic sliding action as the converter is closed. This type of system typically makes us leery, as many cheap converters on the market will not line up correctly and can actually break or snap off the SAS connections on the SSD or HDD.

With a very rare 12Gb/s SSD being installed into the converter, there was a bit of apprehension the first time we closed the lid. The sliding action worked perfectly, the best we have experienced actually, and mated correctly with absolutely no unnerving resistance. We opened and closed the converter a number of times to test the function, and users will have no issues with this system - it works flawlessly. 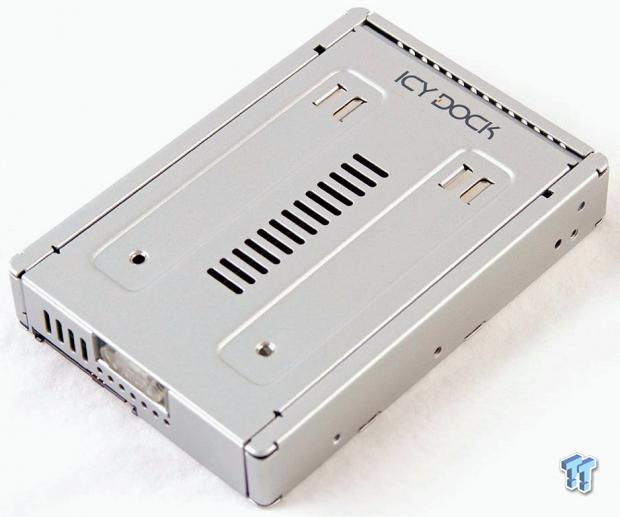 High performance SSDs and HDDs can generate quite a bit of heat during use. The excellent thermal ventilation slots, placed on all side of the converter, provide a tremendous amount of airflow that allows the device to stay nice and cool. We also noted the drive sets flush on the bottom of the converter case. This allows the heat to transfer to the case of the converter, essentially turning it into a large heatsink. This great feature allows for even better thermal dissipation.

In our testing, we can see that the converter applies zero overhead to the performance of even the fastest 12 Gb/s SAS SSDs available. Though the SSD scored faster in the test with the converter than connected directly to our HBA, we have to caution that the Icy Dock converter does not actually speed up the SSD, or allow it to break the laws of gravity. It just merely allows it to perform at its finest with no restriction, and the tests completed within the typical variation expected with flash devices.

The Icy Dock MB982IP-1S-1 is a high quality converter priced very competitively for the price conscious with a three year warranty. This is our first encounter with an Icy Dock solution in the enterprise area here at TweakTown, and it will not be the last. We will be using these converters in all of our server applications in the future. With its high quality and smooth function, we would recommend this to anyone looking for a SAS drive bay converter, easily winning the TweakTown Editor's Choice Award. 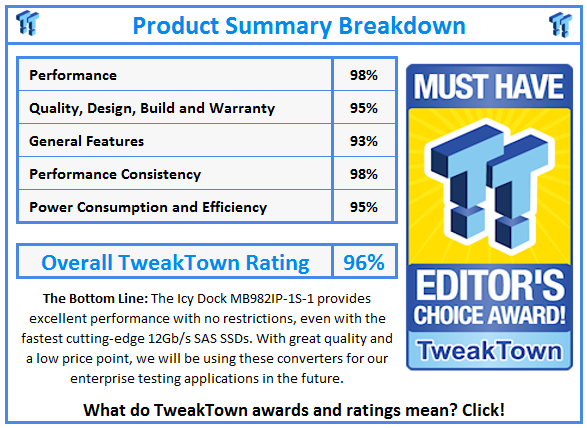