Something I've personally never bothered with is mobile security, but when the opportunity to review it comes up - I'm not going to knock it back. I'm someone who is usually willing to give anything a try, so I jumped at the chance to test Norton's Mobile Security application. 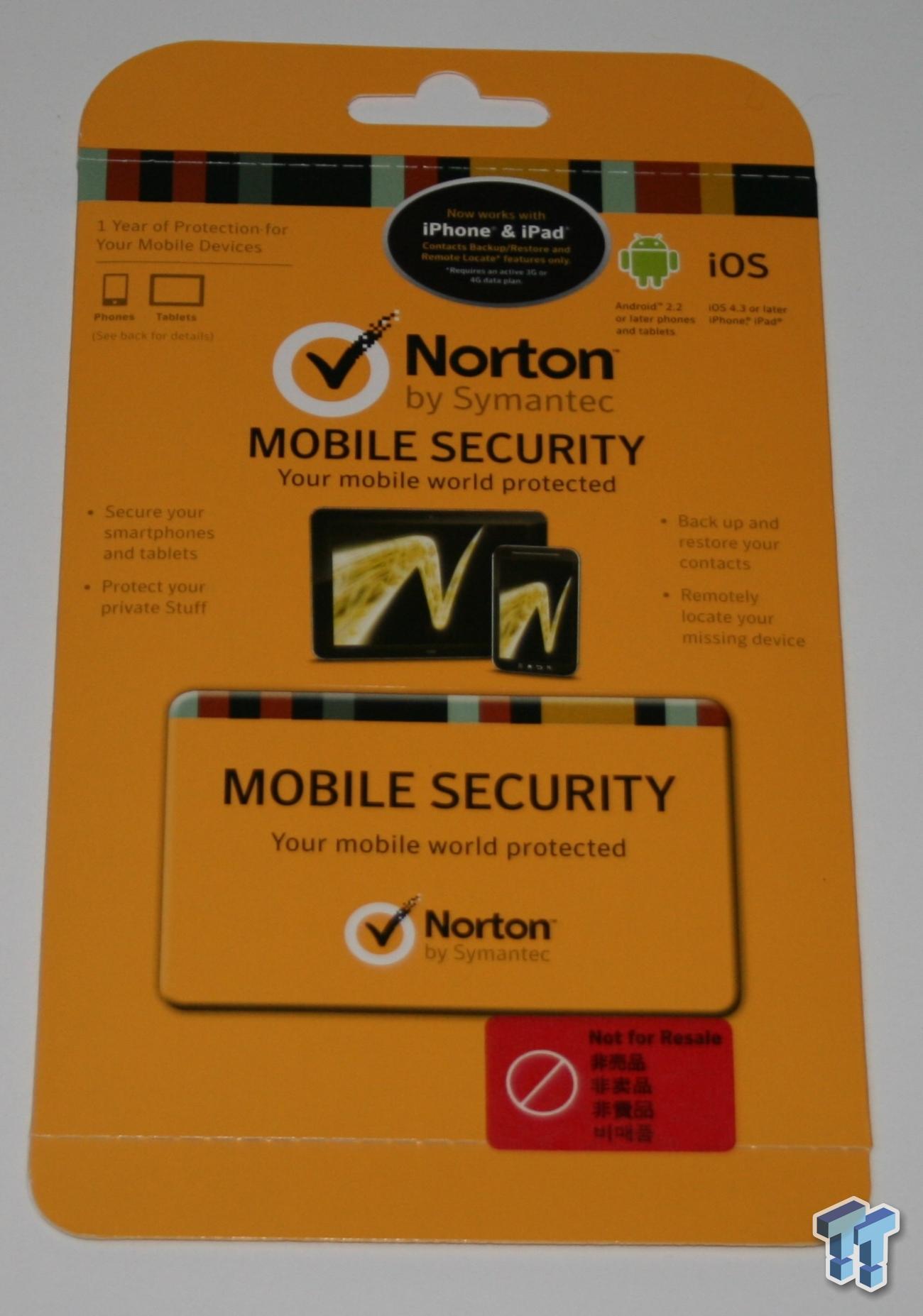 What does it do exactly? Well, it's kind of like having a security guard on your phone, which has some skills that even Liam Neeson would be happy to add to his resume. Norton Mobile Security does quite a bit, where it's even capable of doing backups of your contacts and restoring them in the case of an issue with your device. 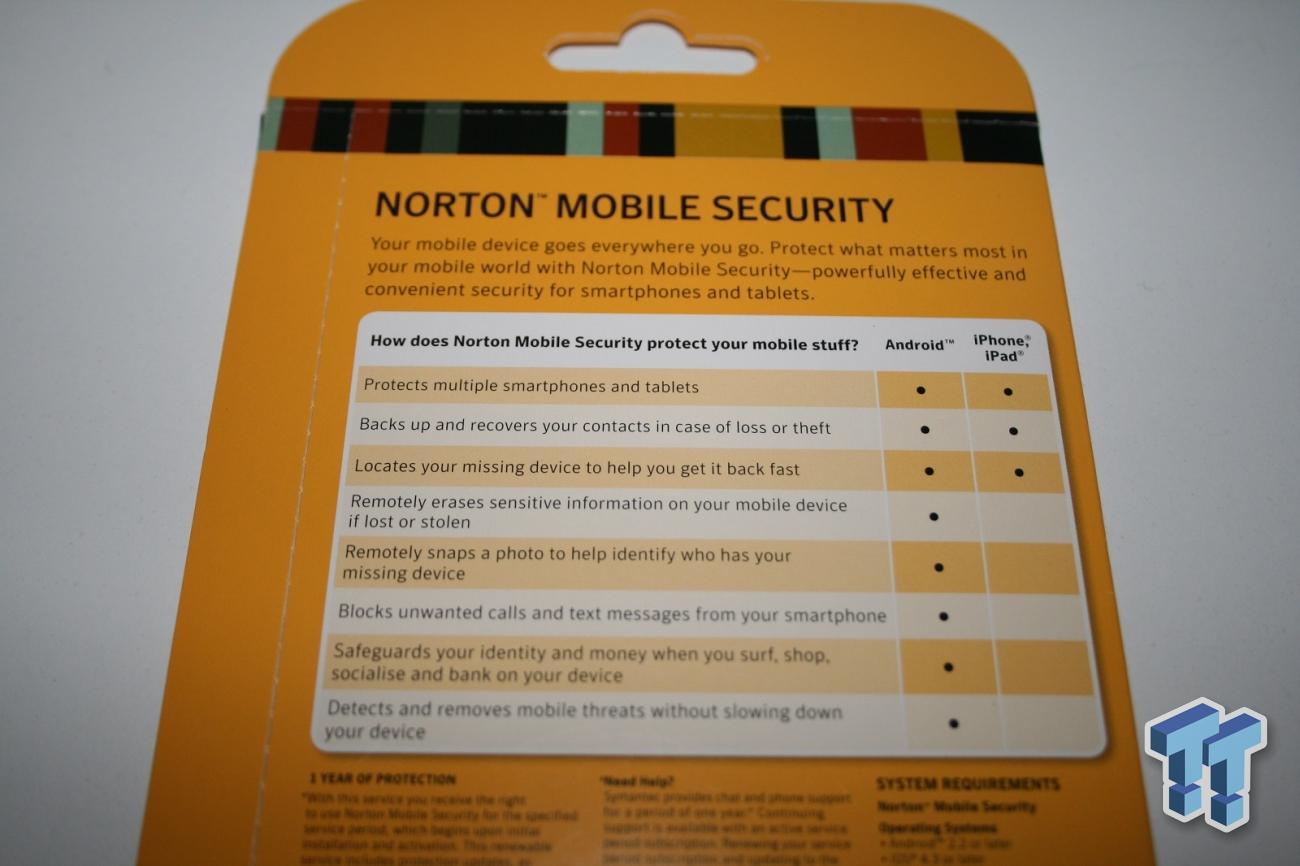 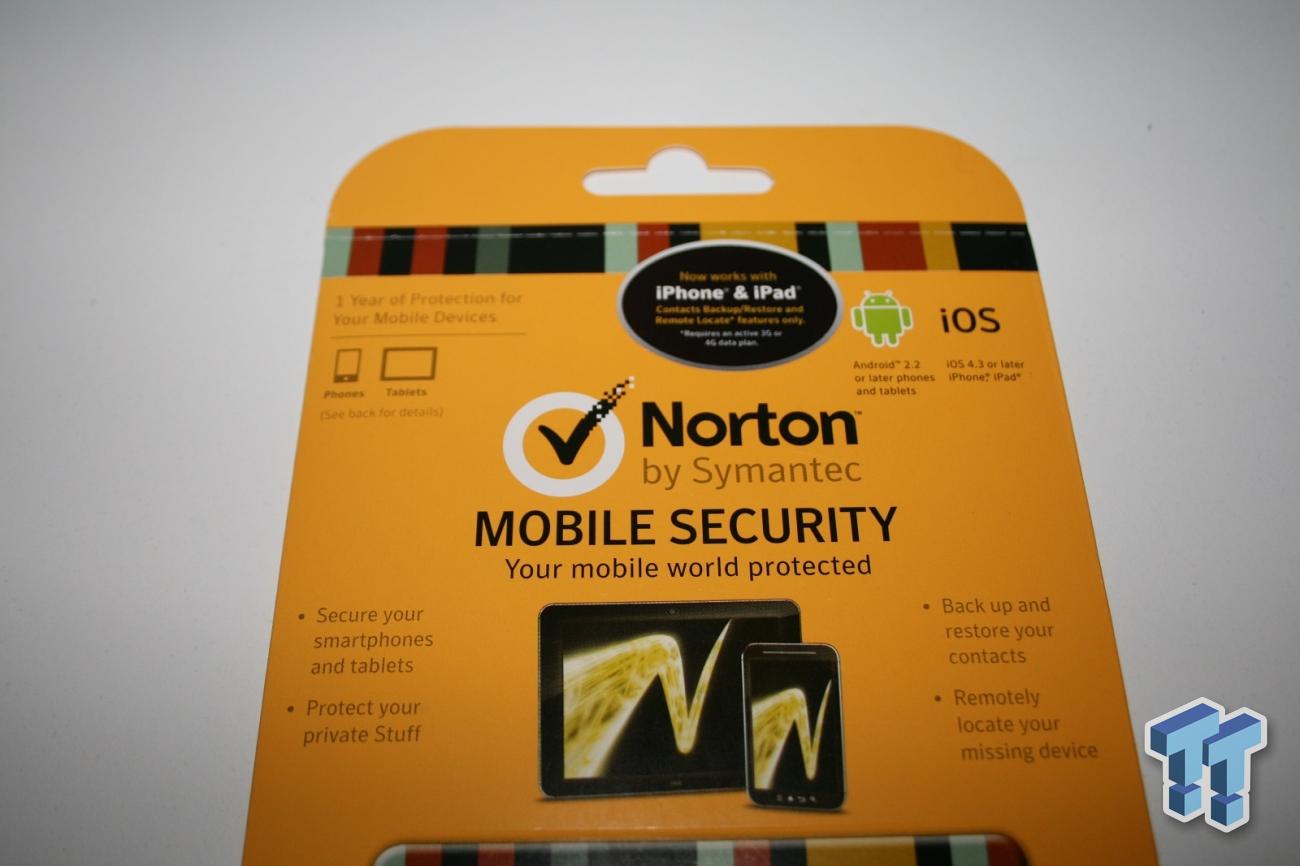 First up, we have the packaging, which arrives as a simple piece of cardboard - this is nice and easy, as it gives you a QR code you can scan to get the installation and registration process underway.

I tested Norton Mobile Security on a phone I'm currently using to review - Samsung's latest and greatest Galaxy S4 - an Android-powered smartphone. The Android variant of Norton Mobile Security has many more features compared to the iOS version, something you should consider if you want to purchase this software. 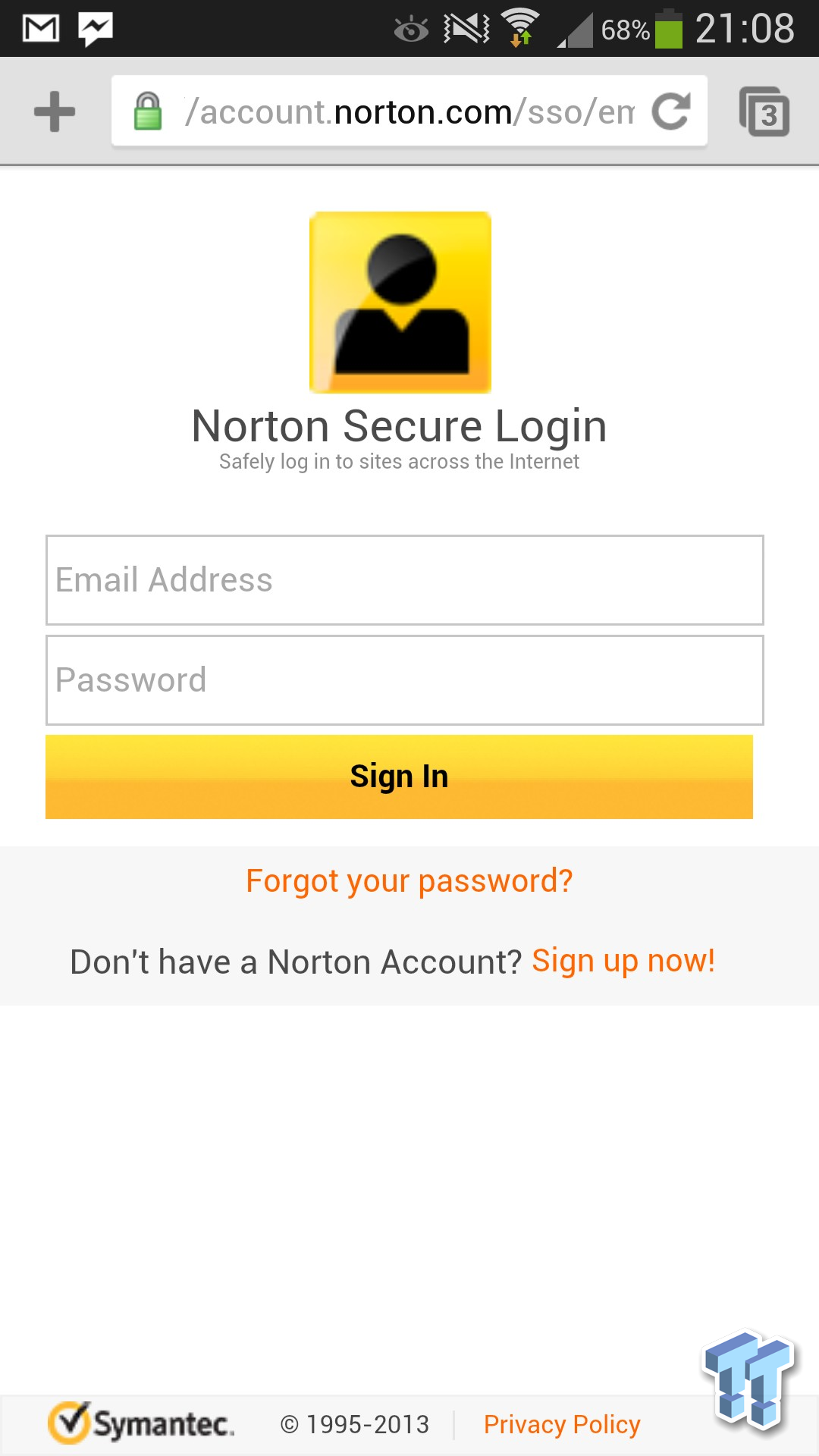 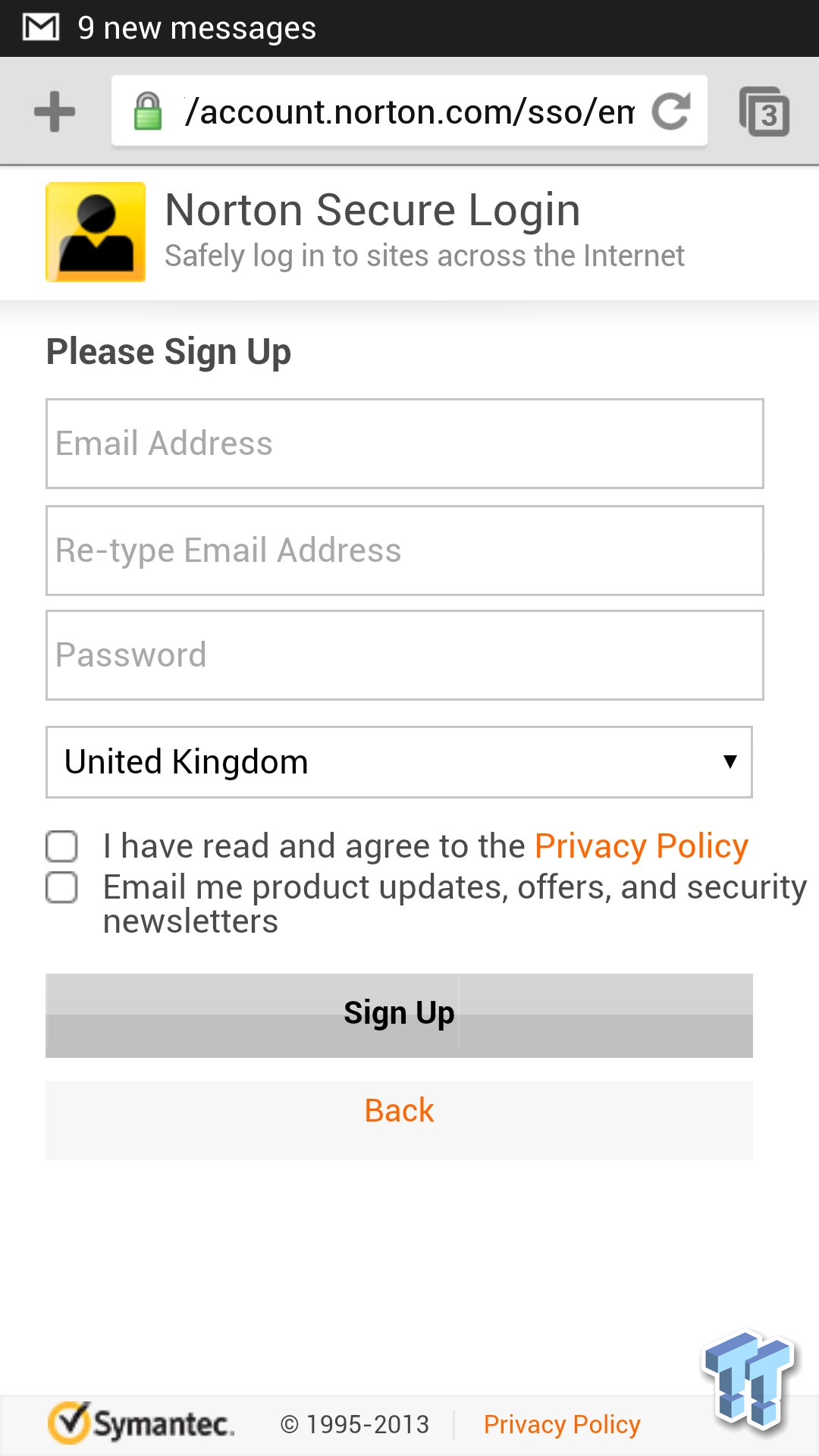 Let's get into the process of installation with some images of what you'll have to go through. First up you'll need to login, or sign up for a Norton Account if you don't already have one. 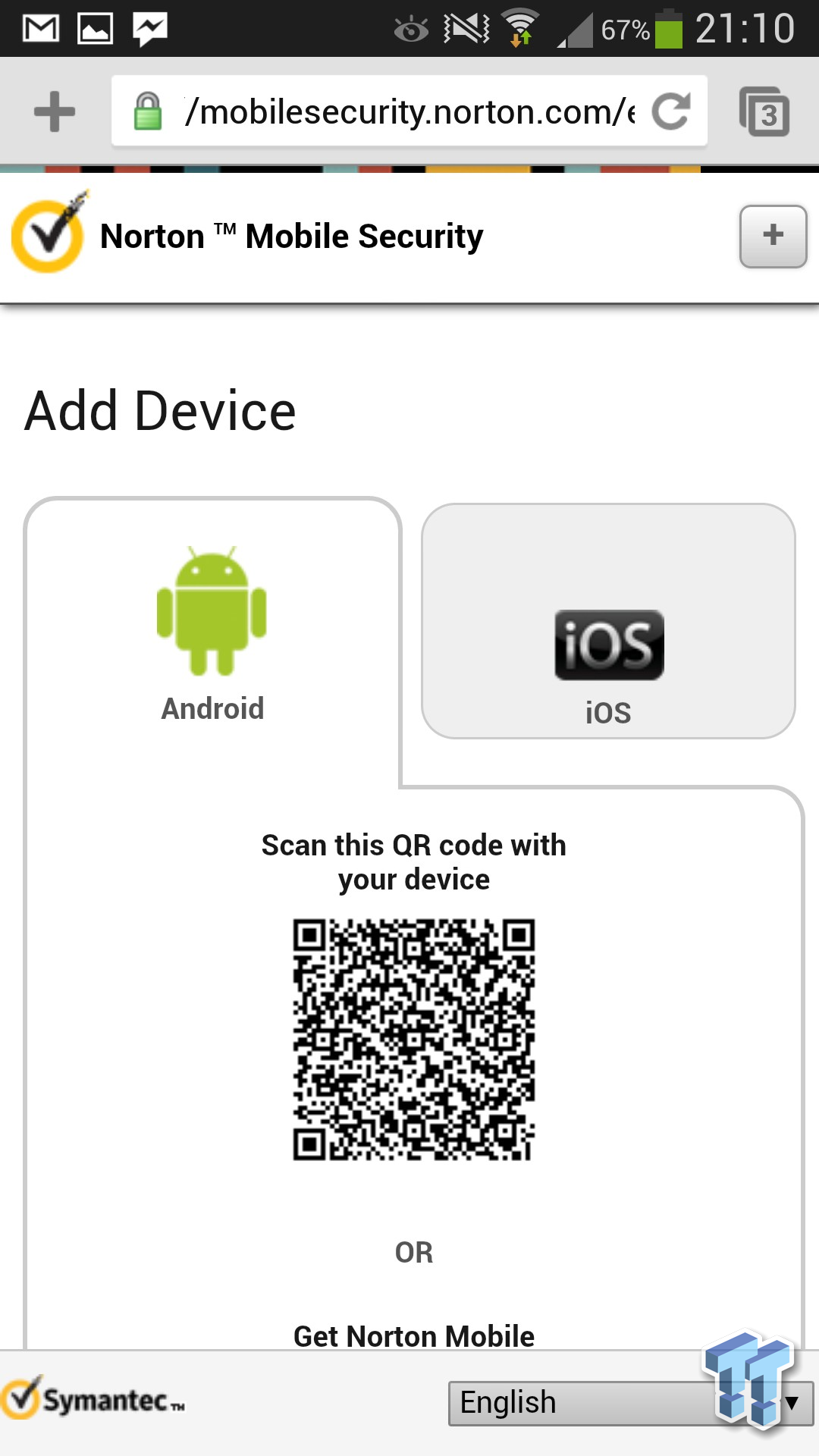 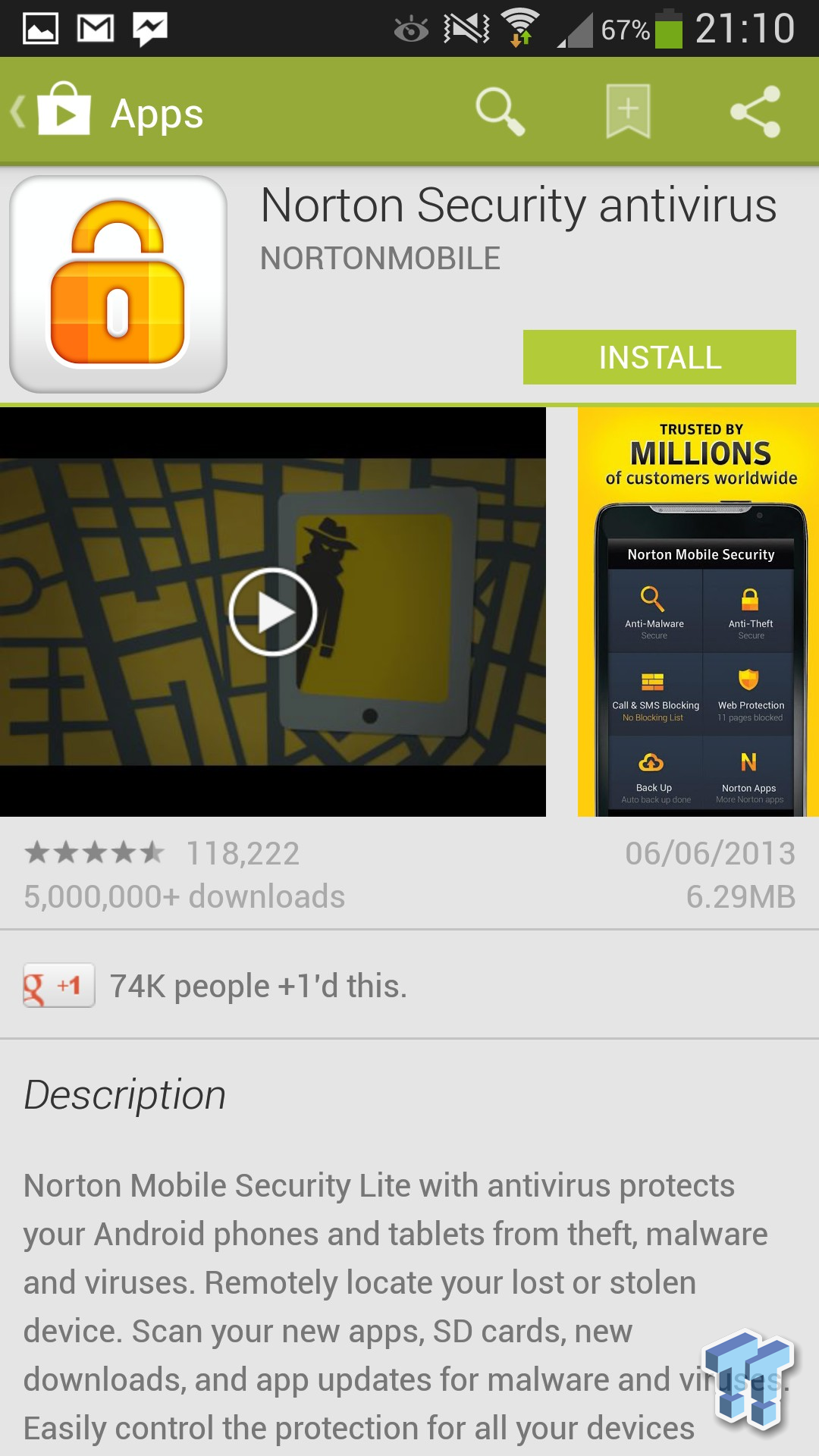 A couple of more screenshots of the final part of the installation process - before we get into the actual application itself. 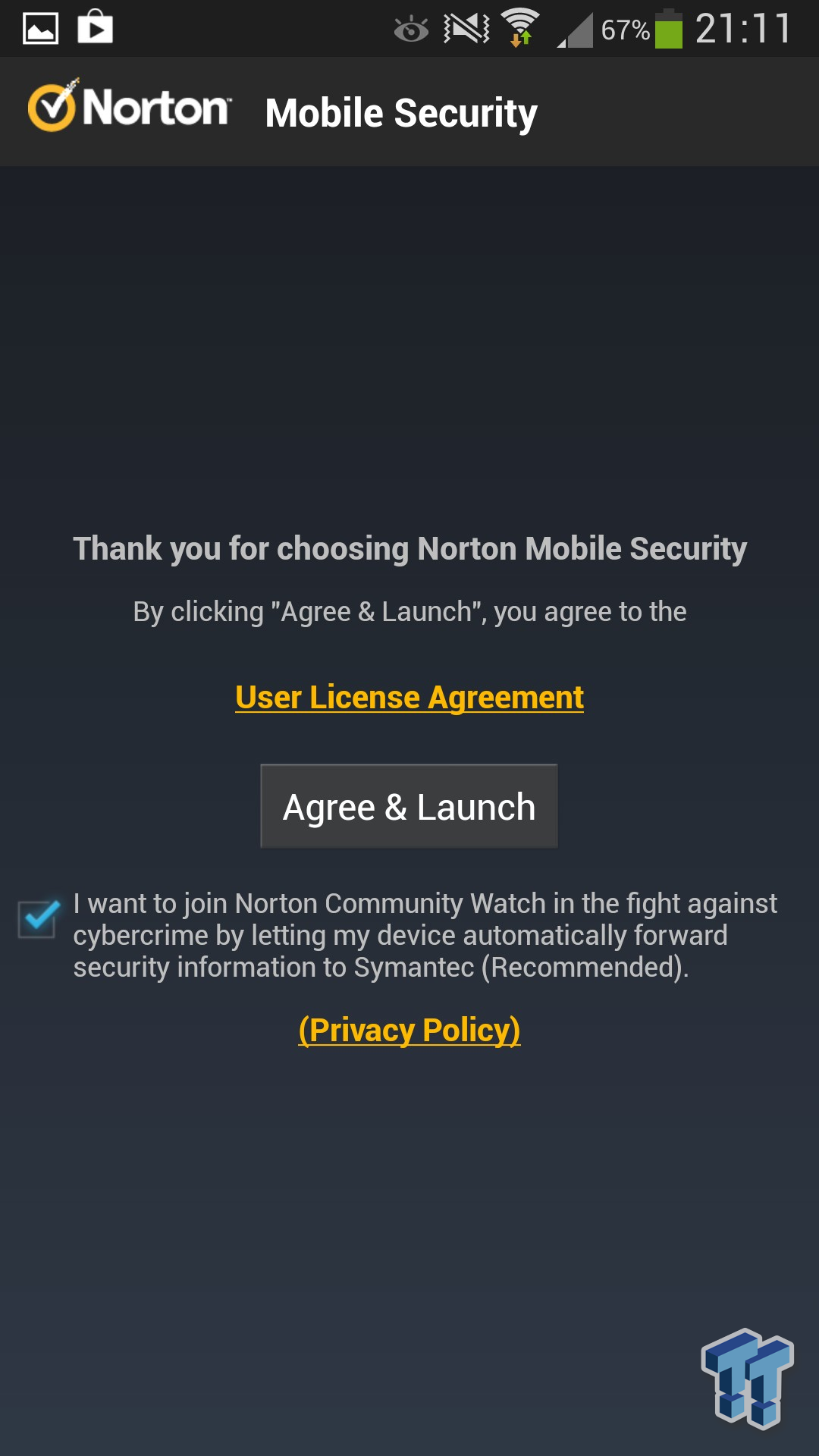 Let's get into the nitty gritty now, shall we? Once Norton Mobile Security is installed, you'll have to check out the usual User License Agreement, and then click "Agree & Launch" 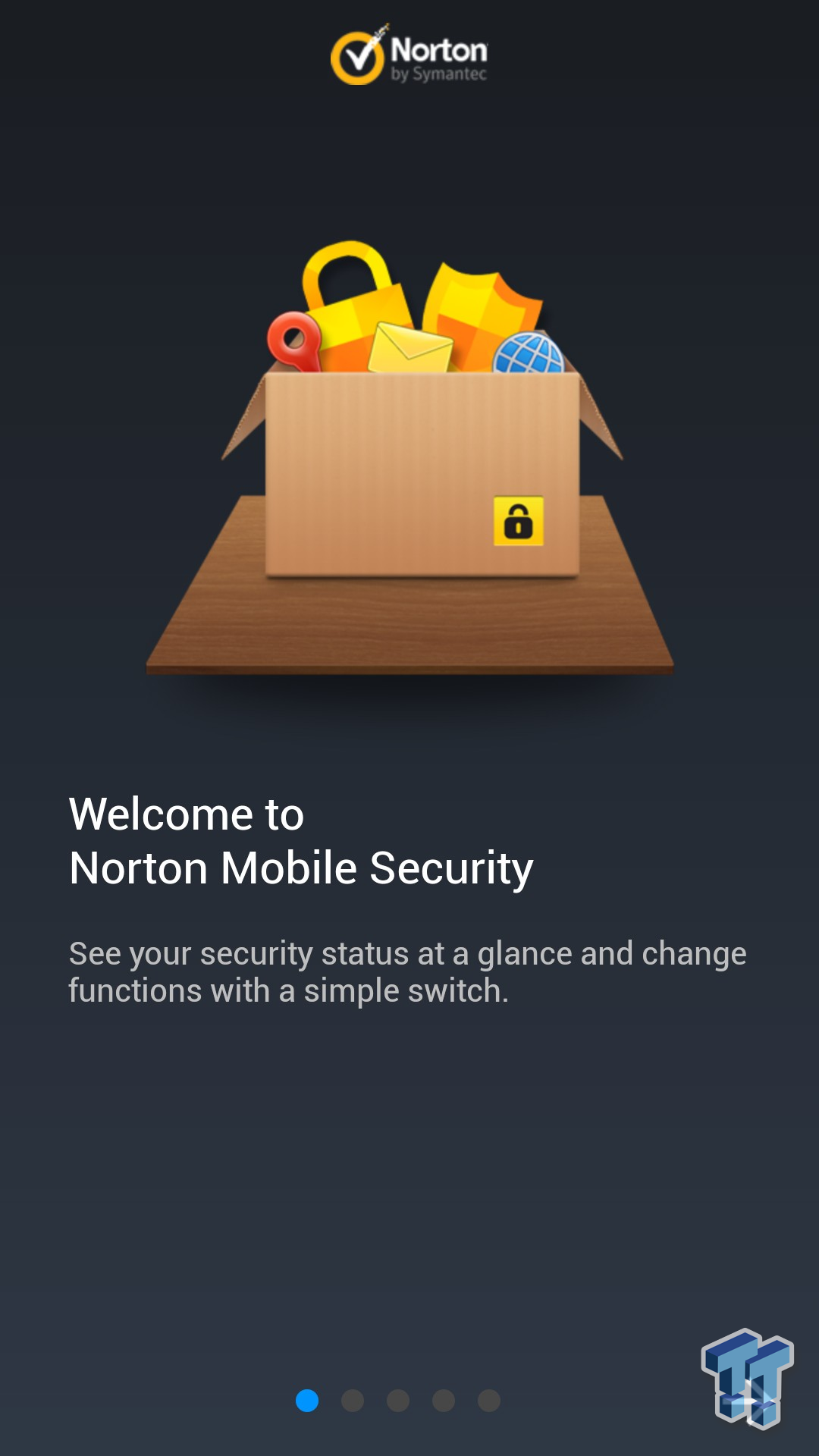 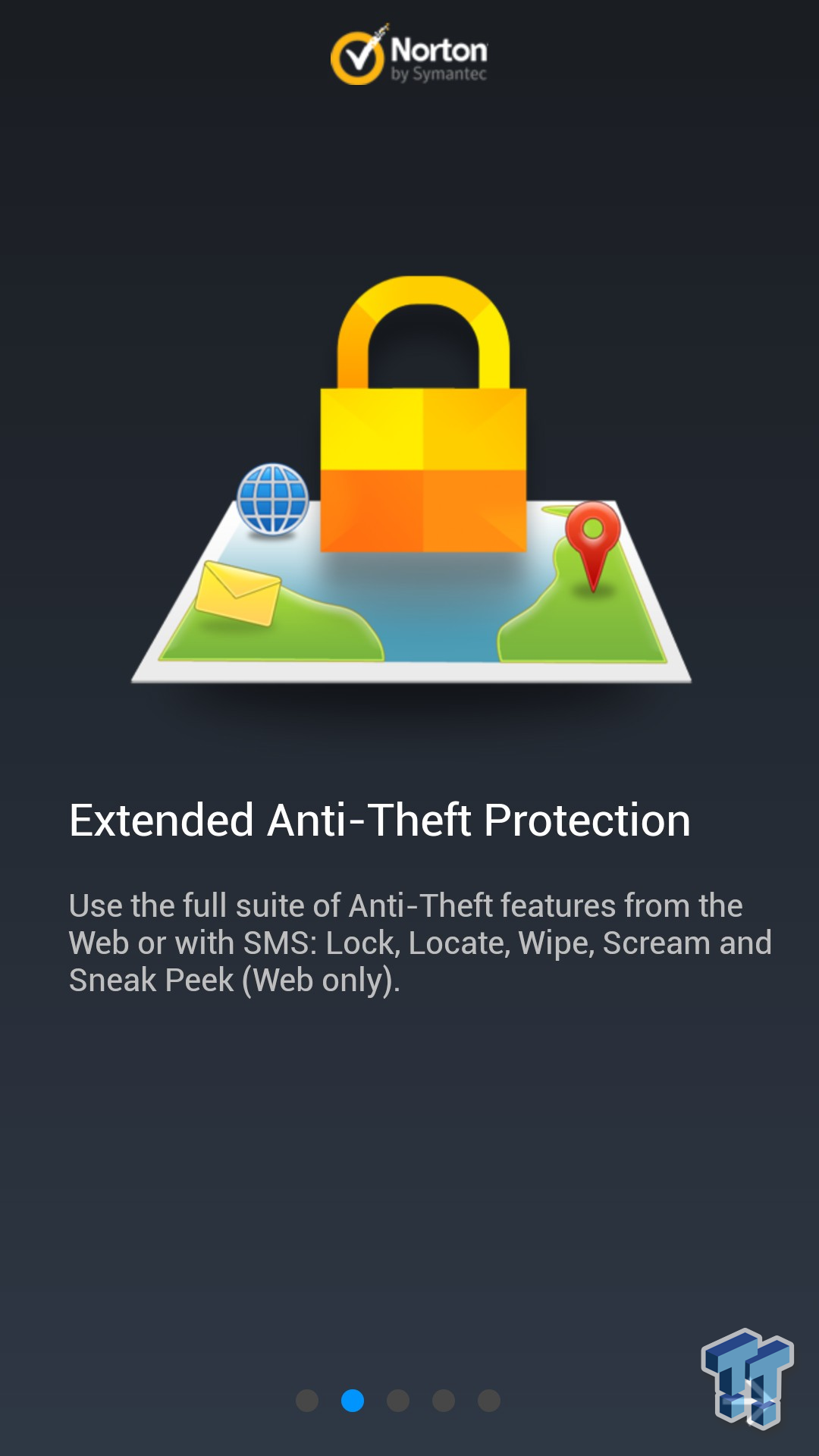 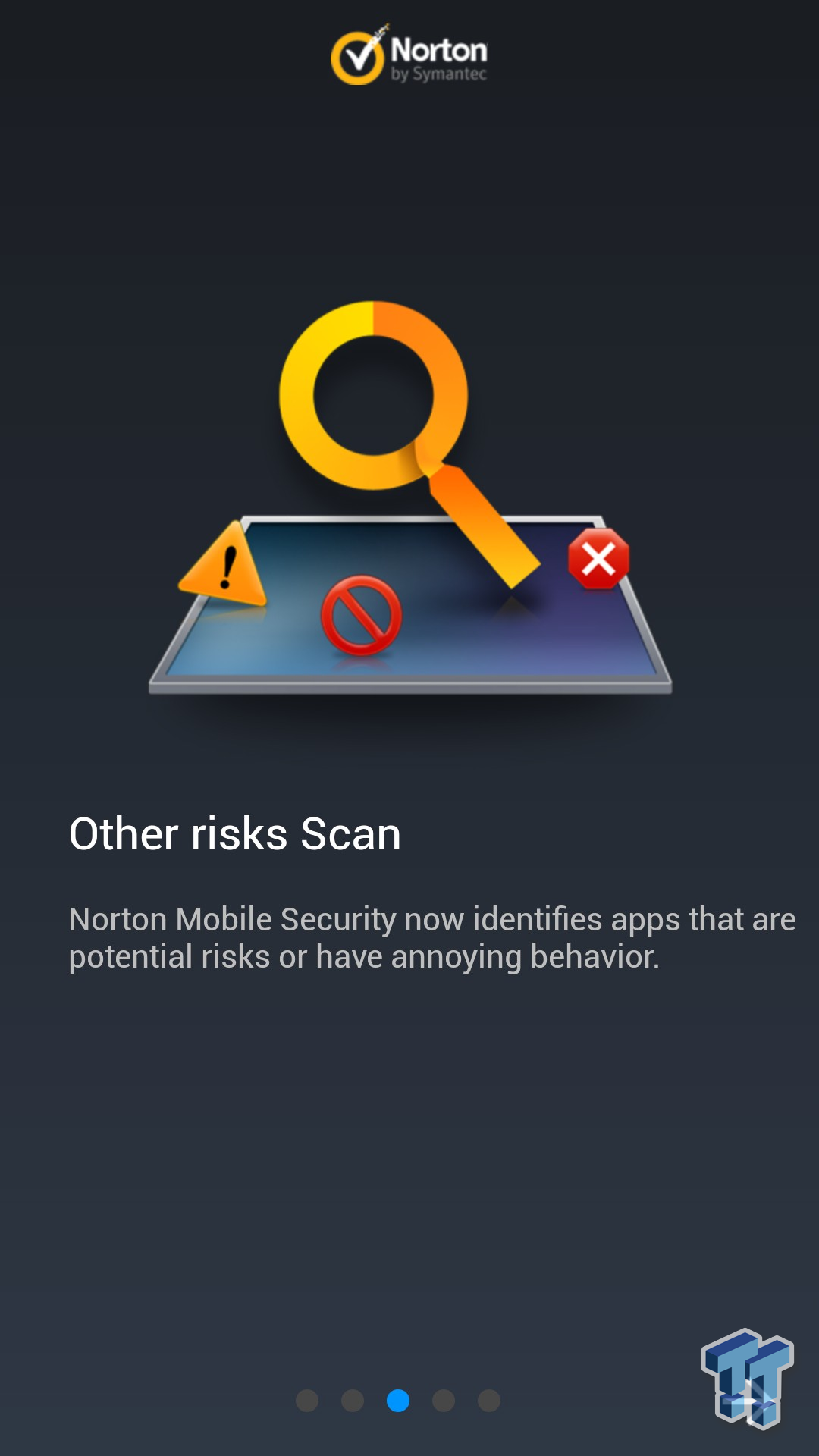 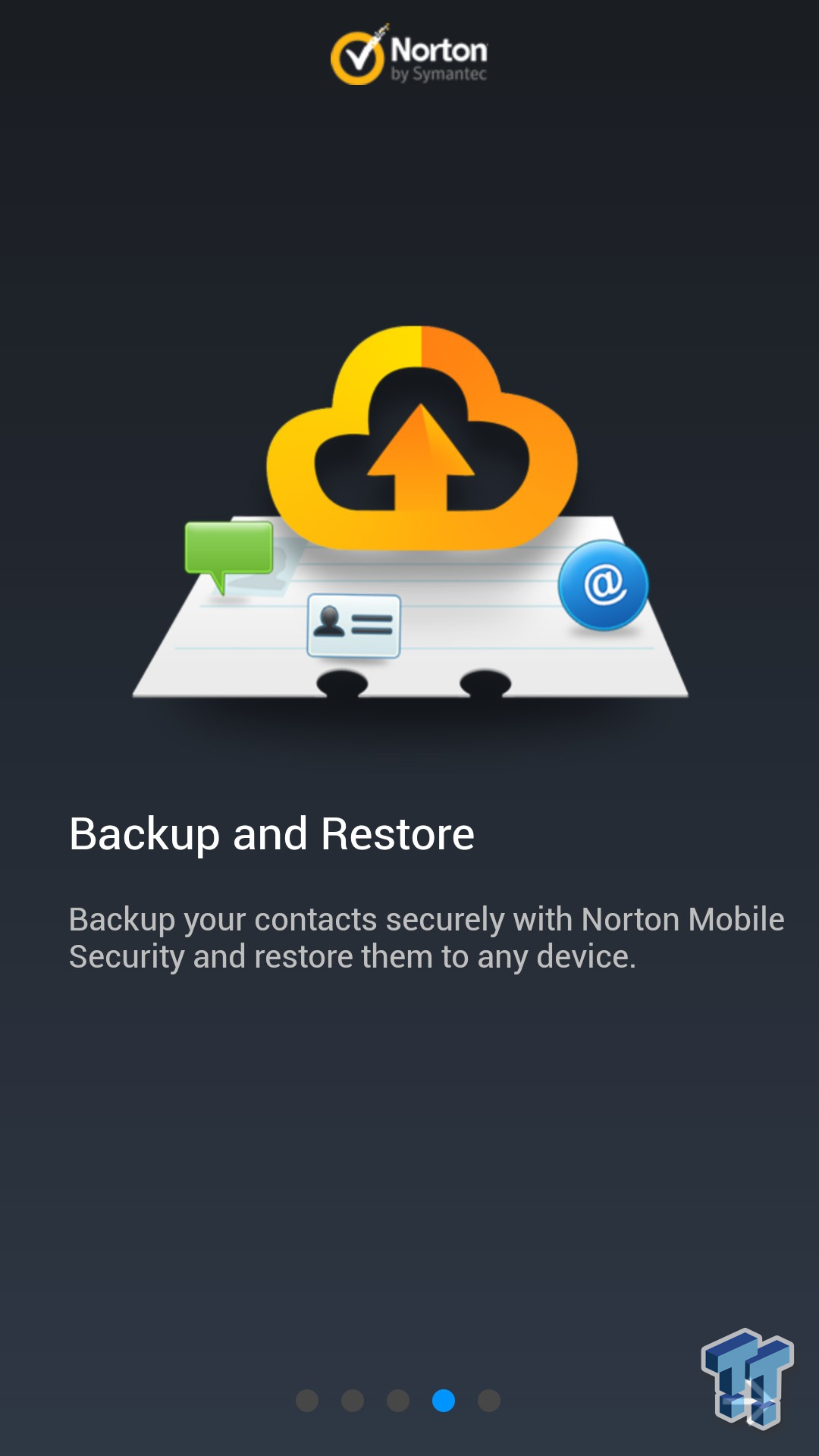 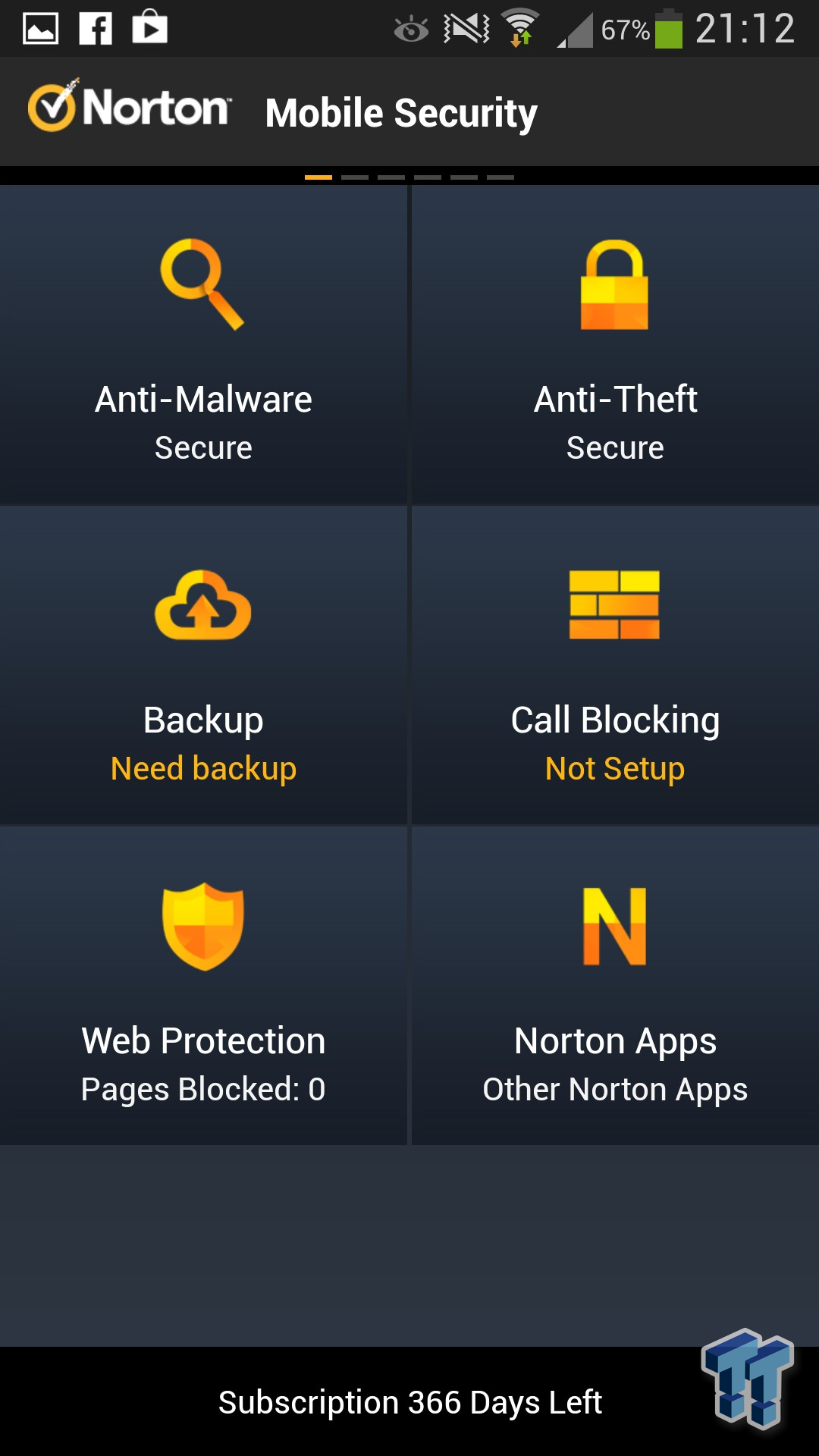 After you've done this, you'll be welcomed to Norton Mobile Security and walked through some of its various features, which you can check out in the images above. After that, we'll go through a few of them to see just how useful they really are. 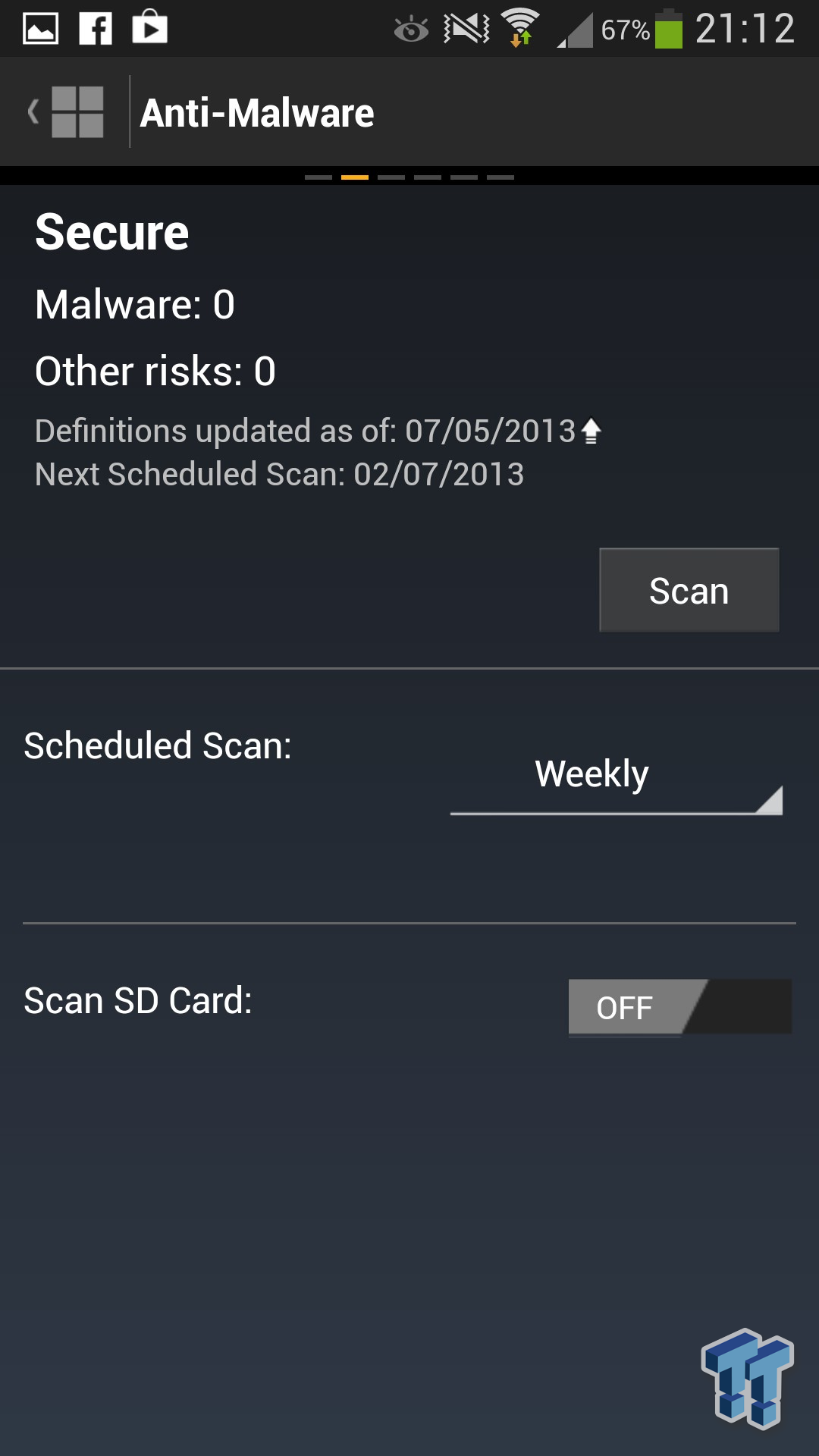 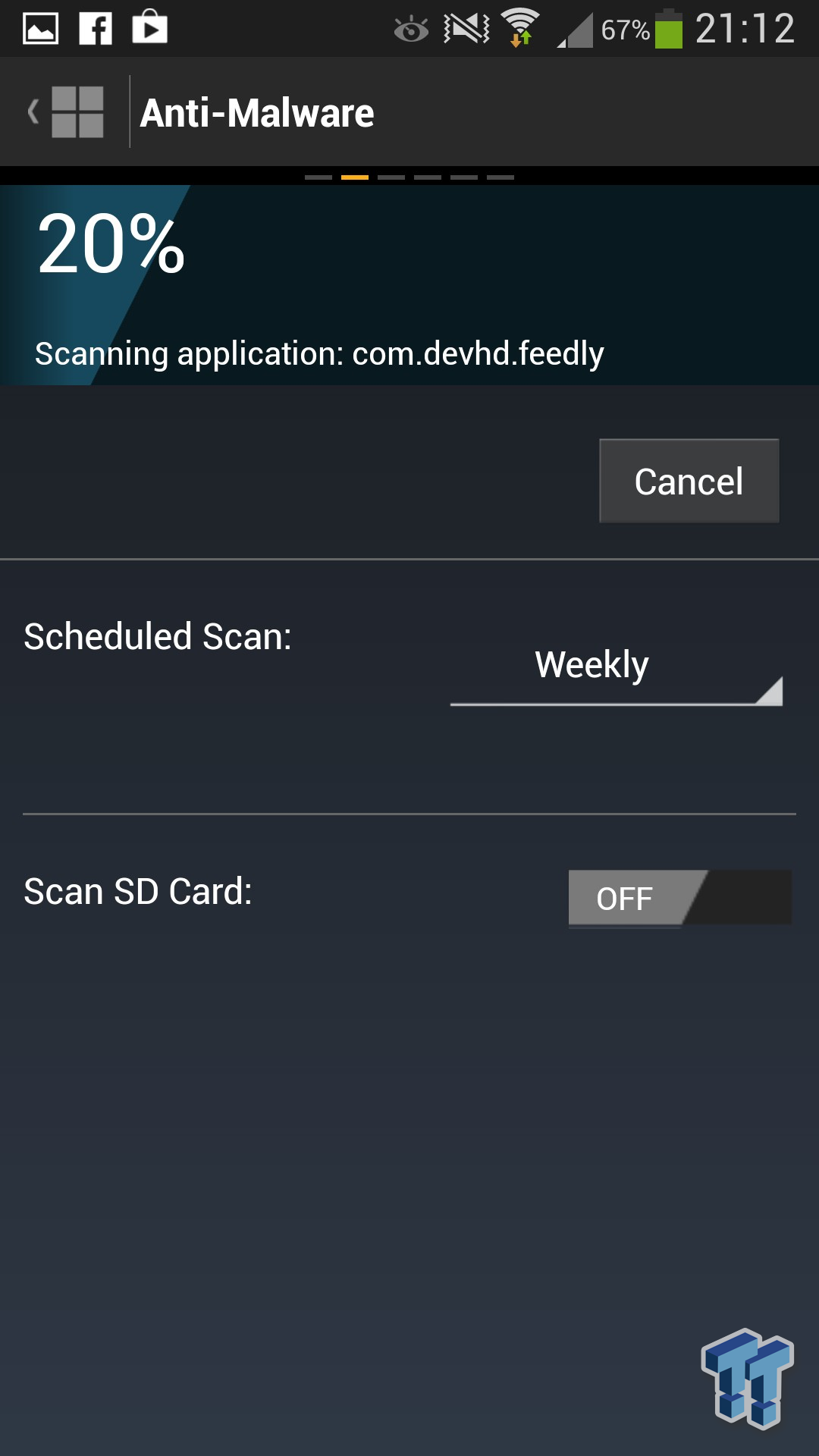 First up, we'll take a look at Anti-Malware, which is fairly self-explanatory. Anti-Malware tries to keep your device as secure as possible from any form of malware. You can do a quick scan once it's installed, and then set it to do scheduled scans. I set mine to do it weekly, as I don't visit suspicious websites whatsoever. You can also scan your SD card for malware, which I thought was a nice touch.

The user-interface is quite nice, with a slick loading bar when doing a scan. The UI of any application is something that is going to stand out, and I'm always a fan of first impressions - so, good work on the UI there, Norton! 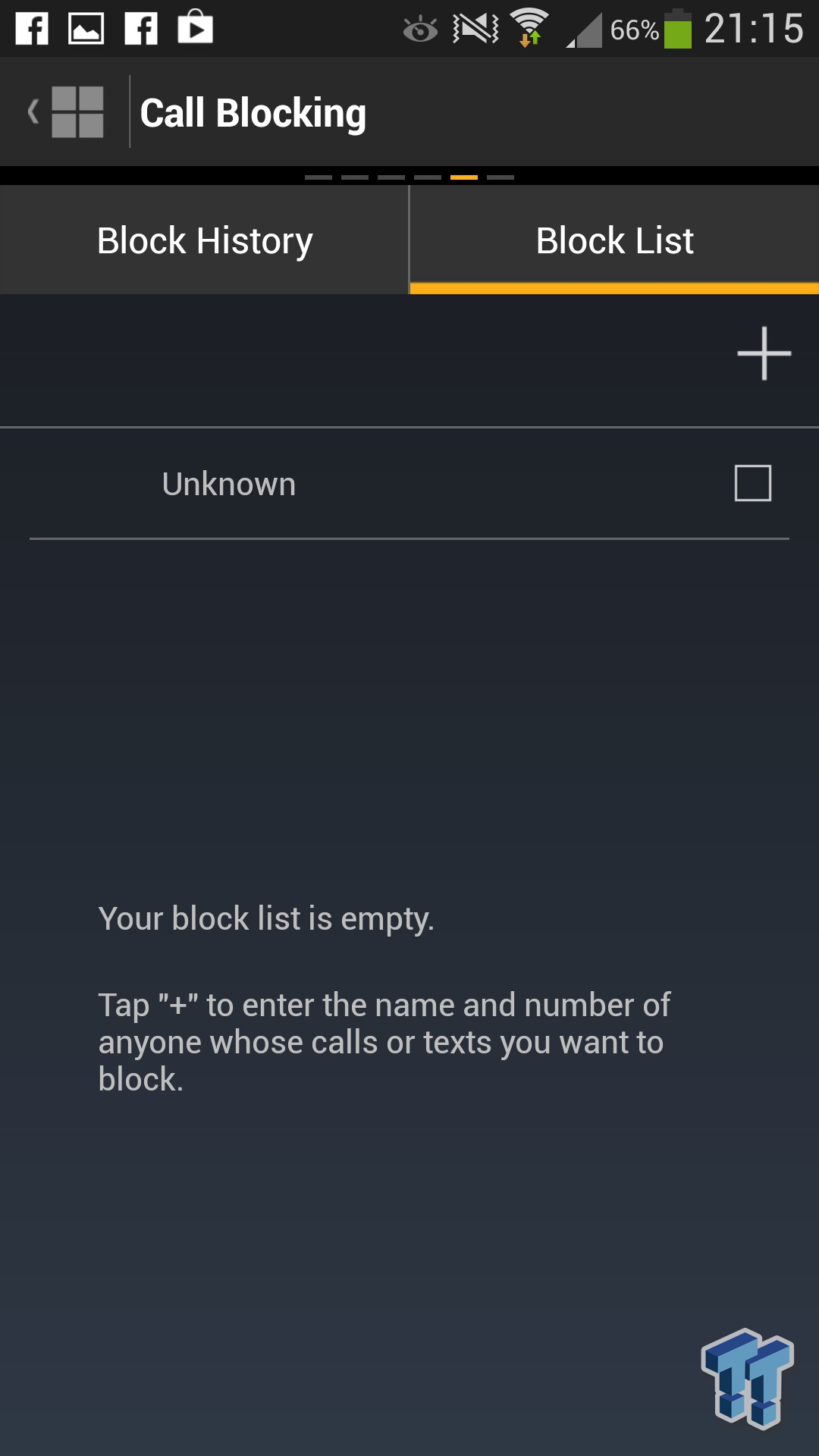 Call Blocking is something that does exactly what you think it does - allows you to block certain numbers from being able to contact you. This is an especially good feature for those of you with stalker-ish ex-boyfriends or girlfriends, or people you just never want to hear from again. I'm not someone who would use this feature, so it goes on unused for me. 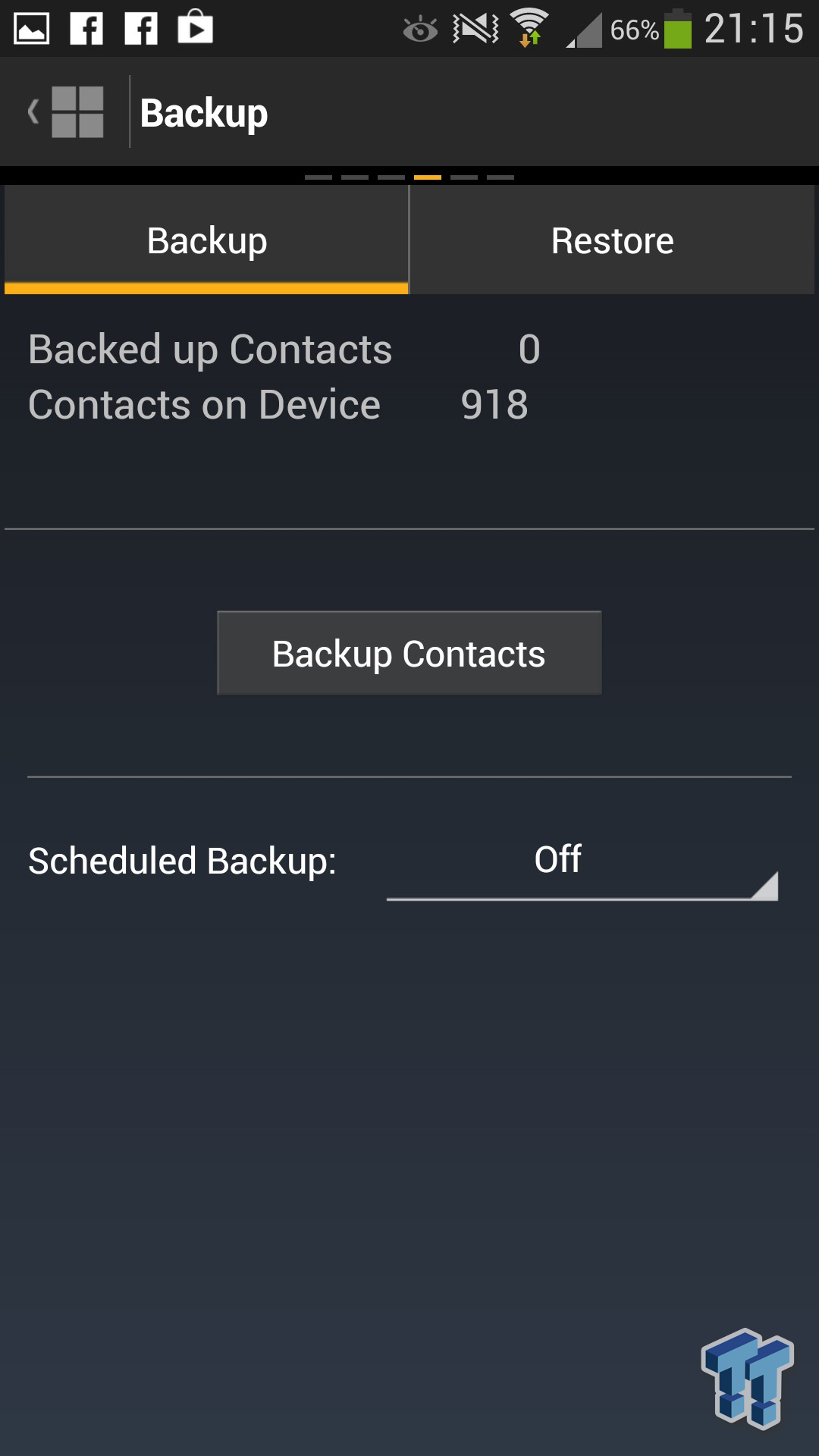 The Backup section of Norton Mobile Security is a great little addition, something I definitely didn't expect to see. I do all of my contact backup within my Google account, as most Android users would, but this would be a great feature for those who don't.

You can backup all of your contacts, restore them all if something were to happen to your device, as well as schedule backups to a certain time (once a week or month, for example). 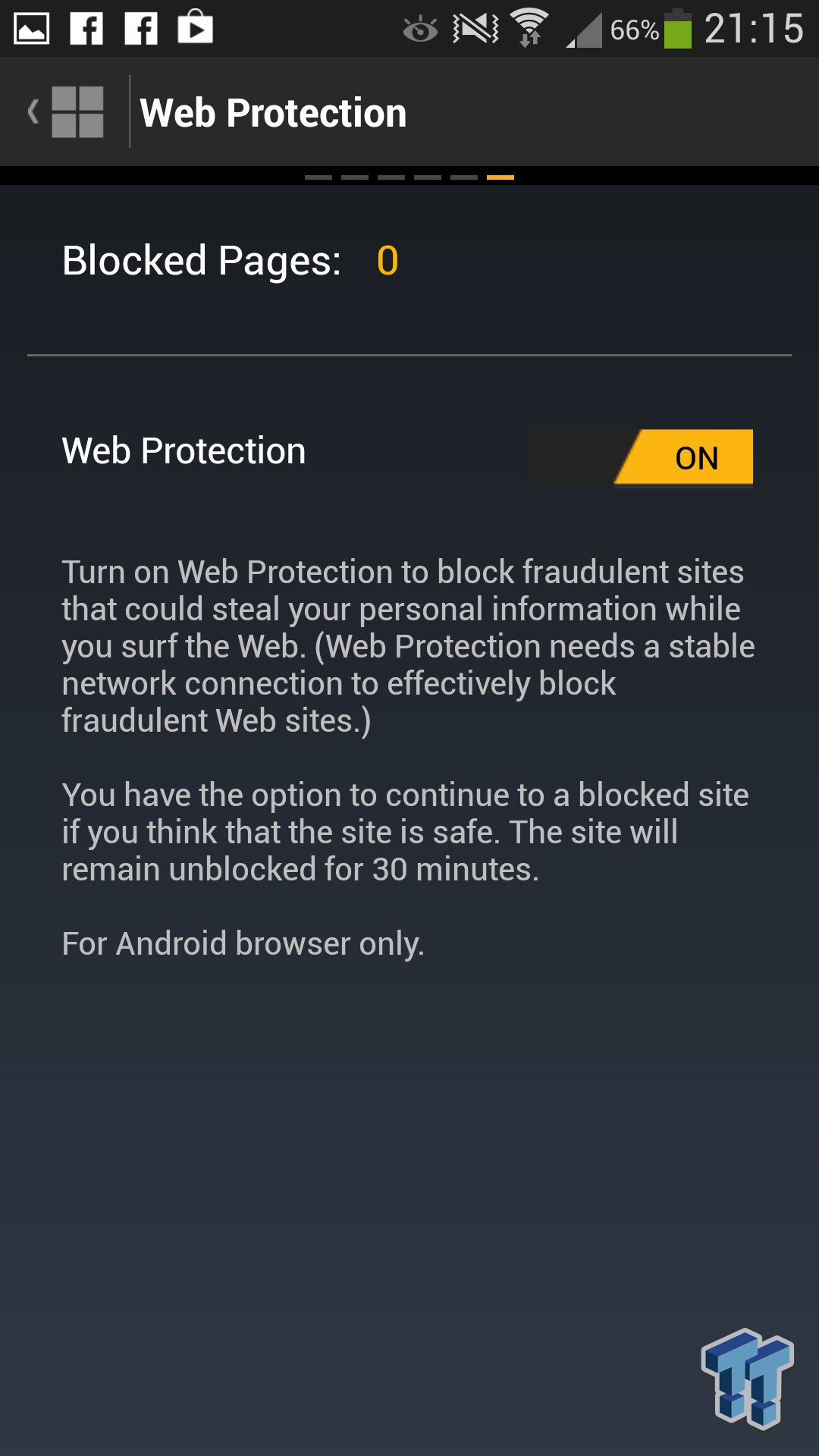 The Web Protection feature of Norton Mobile Security would like to keep your smart device safe from fraudulent websites that could potentially steal personal information from you. This feature is for the Android browser only, and not any other browser such as Firefox. 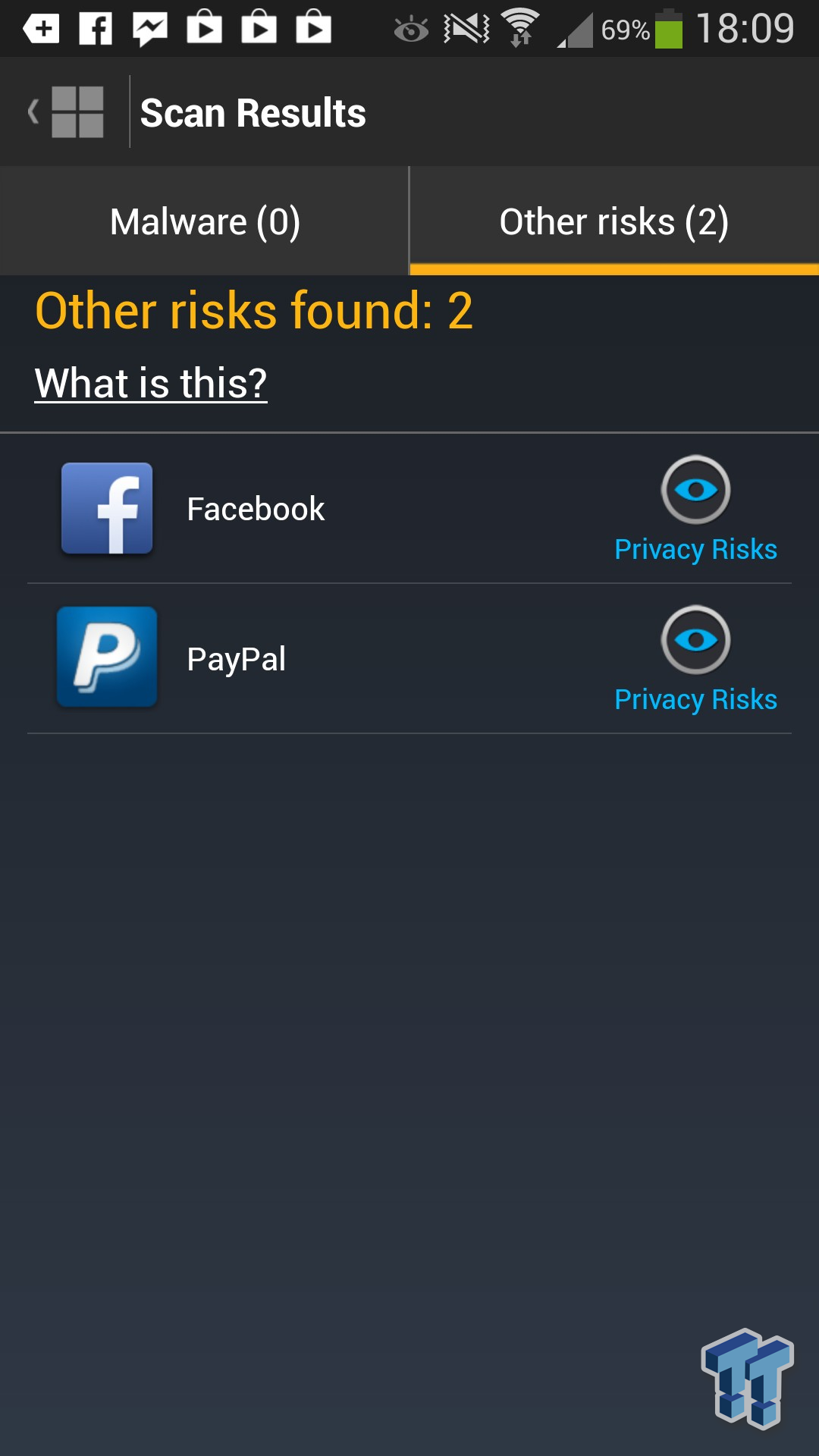 After a couple of days of use, I received a warning on my phone that I was at risk. I was shocked, what could it have been? I checked it, with Norton reporting to me that Facebook and PayPal were potential 'Privacy Risks'. I dug the little 'eye' they've used for the 'Privacy Risks' icon, so I wanted to see what was bugging the app - because I trust those applications. 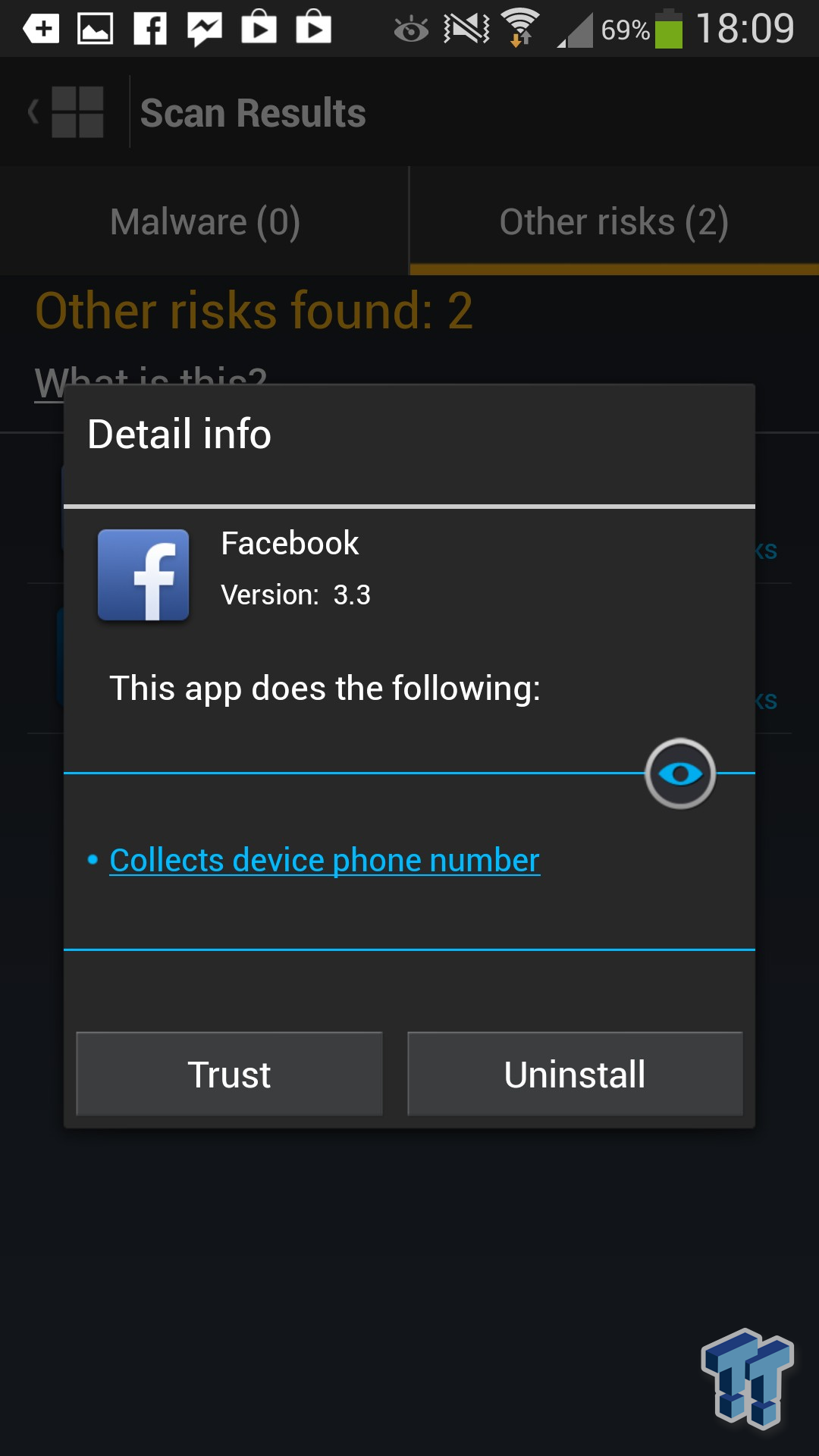 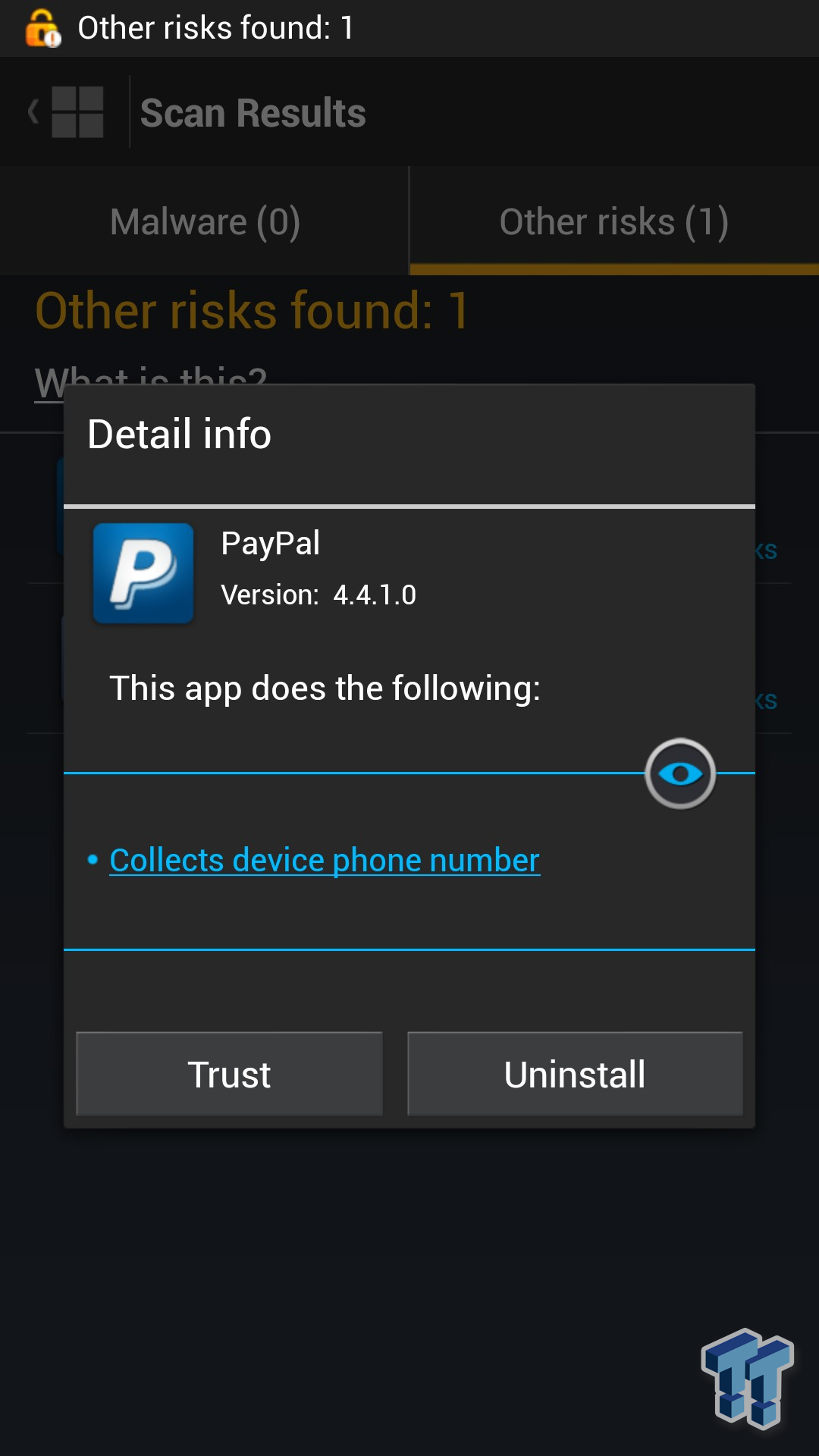 Ok, so Norton Mobile Security was warning me that both Facebook and PayPal "collects device phone number", which I don't mind - as it's not like I'm scared of someone getting my number. I have my mobile phone number available on my Facebook account anyway, and PayPal - well, that's for payments anyway, with my mobile number once again connected to my account.

I can't make judgment on the iOS version, but with just three features, I think it would be pretty useless purchasing Norton Mobile Security for your iPhone or iPad. But for Android? It is a layer of security that some would find comforting. For me personally? I don't see the point of using it - I'll keep it installed, but I won't renew the license. This is because I have all of my information within my Google account anyway - look at all of the NSA PRISM news we've been posting lately - all of your information is at someone's fingertips, they just need the knowledge and power to get it.

Norton Mobile Security will protect you against those pesky websites and crappy apps from the Google Play Store, but beyond that, you always need to be vigilant with your smartphones and accounts to various apps and websites.

Do I recommend Norton Mobile Security? If you're the kind of person who downloads lots of apps and visits many websites that aren't so mainstream - yes. If you have kids - heck yes. If you're a power user, you probably skipped over this entire review for this sentence - this isn't for you. 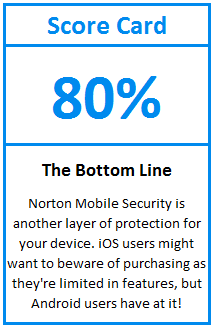