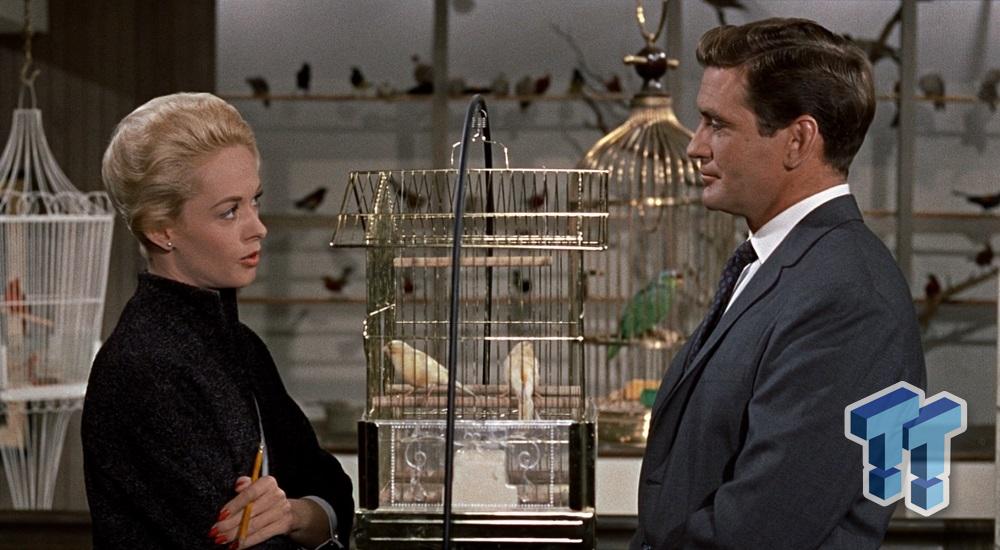 The Birds, often referred to as 'Hitchcock's monster movie', is one of the masters most memorable - praise indeed for a man that gave us Psycho, Dial M For Murder, Vertigo, North By Northwest and Rear Window. Part of its success lies in the seemingly innocuous way that the flocks of titular birds descend on Bodega Bay, without cause nor reason and no explanation offered. Where the birds sick? Crazed? Possessed? We will never know. And therein lies the simplistic beauty of the film.

When Melanie Daniels (Tippi Hedren) arrives in Bodega Bay, she quickly strikes a friendship with local bachelor Mitch Brenner (Rod Taylor). But after a brief flirtation, Melanie is inexplicably attacked by a seagull, the first of many avian attacks that beset the isolated town, resulting in injuries, deaths and a terrified populace.

The Birds is not Hitchcock's absolute finest, but even average Hitchcock is better than most entries from a director's catalogue. Fifty years on, The Birds is still a compelling and intriguing drama, which will no doubt enthrall another generation in its high definition debut. 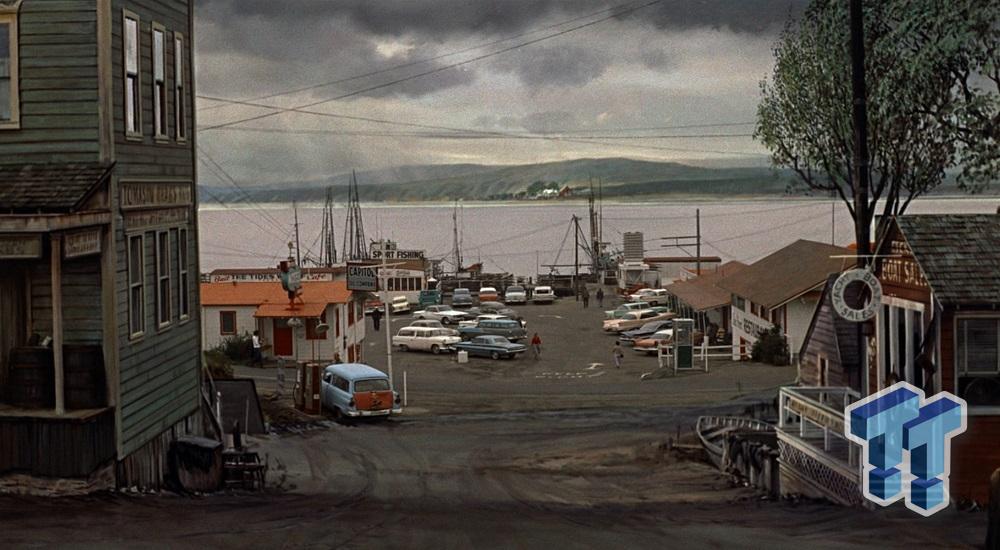 From the batch of Hitchcock films released by Universal, The Birds has fared better than most, receiving a newly struck transfer which carefully treads between the films aged elements and the wide variety of production methods, including matte paintings and composite shots. The image is relatively sharp and detailed, only confined by the technical limitations of how certain shots were achieved. Grain is a little uneven and I noticed a few attempts by way of noise reduction to minimize them, but overall it's a tasteful remastering effort that stays true to the traditional visual look of the film and I'm sure, the original negative.

The Birds is presented in DTS HD Master Audio 1.0 at 24 bits.

In a time when remixing old soundtracks into surround sound is the norm rather than the exception, it's somewhat surprising to find a good old fashioned mono audio track on Blu-ray. As such, no one is expecting to be wowed by a sonic experience to end all others and thus no one should probably be too disappointed. Still, it's a shame that Universal's mixers didn't attempt to extrapolate even a pro-logic mix, but perhaps the elements were missing or otherwise unavailable.

Audio is intelligible throughout, and I didn't notice any anomalies such as audio sync issues, however it's quite obviously hamstring by the recording technology of the day, displaying a thinness and shrillness that accentuates treble. If engaged with a pro-logic audio receiver, the algorithm will attempt to do what it always does, that is extend the audio over the available speakers, but it's mostly a moot exercise.

Unsurprisingly, there is precious little in the way of bass. 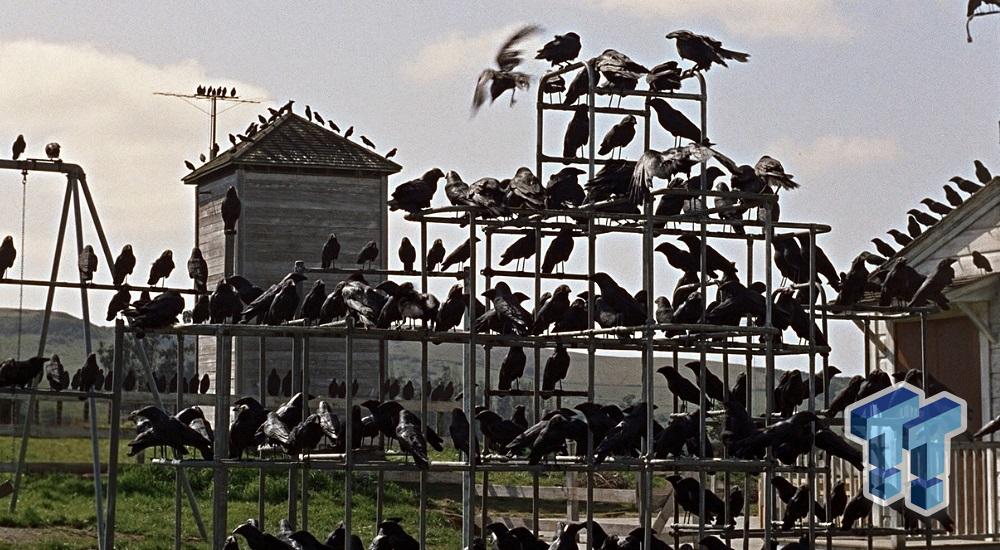 Universal have collected a surprisingly high quantity of extra features for The Birds, many of which are rather good. Let's take a look.

The meatiest of the features is the 80 minute long All About The Birds Documentary, which is a holdover from the DVD release, and looks at the genesis of the project, casting and an intriguing look at the creation of the visual effects.

Next is the new The Birds: Hitchcock's Monster Movie Featurette, which despite being somewhat brief at 14 minutes long, does have a reasonable amount of background on what piqued Hitchcock's interest in the project. Tippi Hedren's Screen Test Featurette is a fascinating insight into Hitchcock's exacting nature. The Hitchcock-Truffaut Interview Excerpts, compromises of a vintage audio recording session over stills, as influential French director Francois Truffaut interviewed him for a book release.

Next are a few smaller entries, including a Deleted Scene and Original Ending, albeit in script and sketch form. The Storyboard reel is sadly presented in basic SD quality, but serves to show how closely planned sequences were. The Theatrical Trailer and The Birds is Coming and National Press Club Hears Hitchcock Newsreel acted as early promotional features, the former of which no doubt left English teachers infuriated for its apparent misuse of language.

Finally, we have two featurettes which are not directly related to The Birds, but promote Universal's 100th Anniversary. 100 Years of Universal: Restoring the Classics is meant to illustrate the company's commitment to film preservation, which might cause some film fans to choke on their popcorn, while 100 Years of Universal: The Lot looks at the legendary history behind the studio where hundreds of classics were lensed. 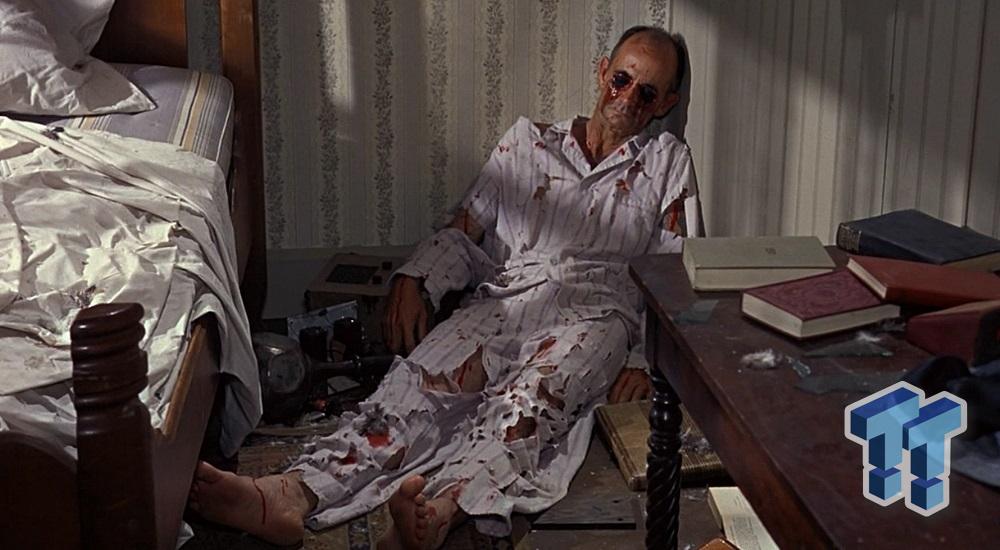