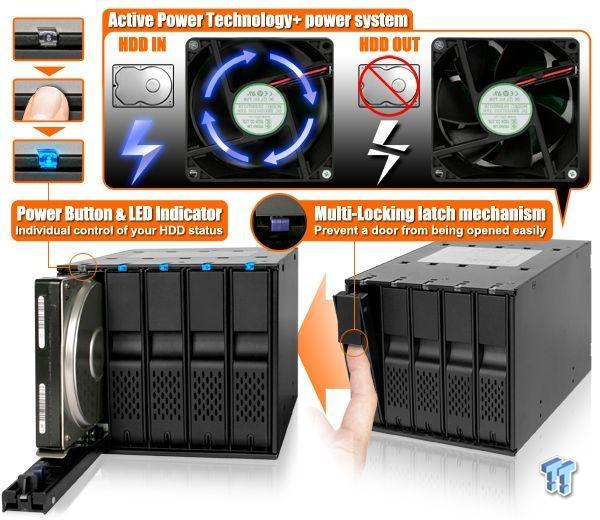 With optical media on the way out and digital media on the rise, the FlexCage products allow for an easy transition from unreliable, fragile and slow technology to the golden standard, mechanical disk storage. 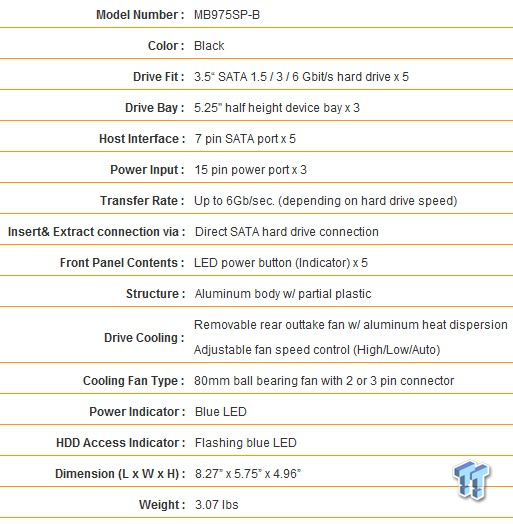 The MB975SP-B spec sheet is straightforward, five 3.5" HDD's in three 5.25" optical drive bays with a cooling fan, adequate power delivered to the drives via three SATA power plugs and an 80mm fan to keep everything cool.

The cooling fan has three speed settings - low, high and our favorite during testing, Smart Cooling, an automatic temperature sensing setting that eliminates any possible fan noise until you fill the cage and start crunching random data.

At the time of writing we couldn't find the MB975SP-B available at Newegg or through Google shopping. The SATA II model the MB975SP-B is replacing is on Amazon for $113.33, for reference only.

Let's take a quick look at the product packaging, the inner packaging and the manual. 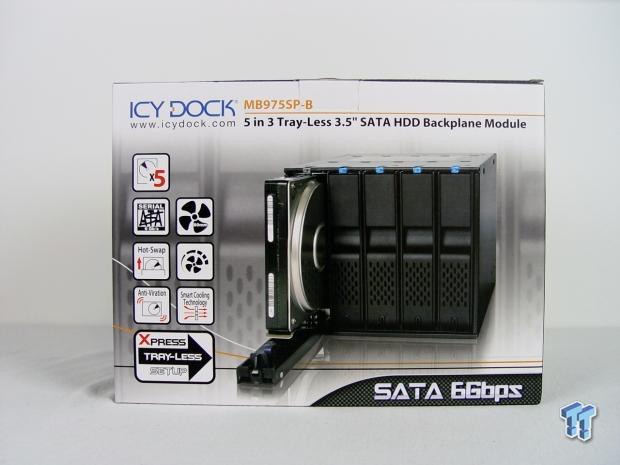 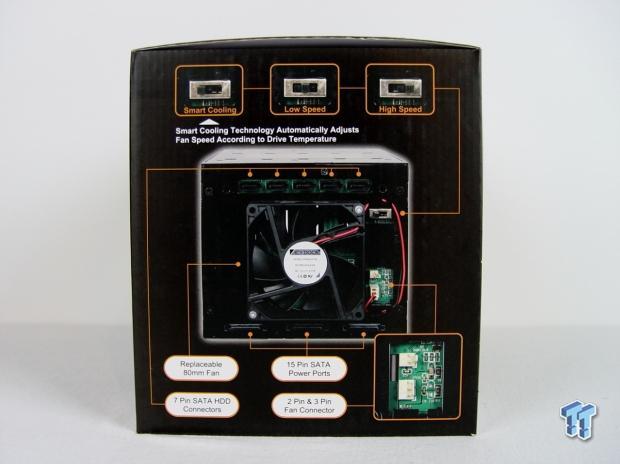 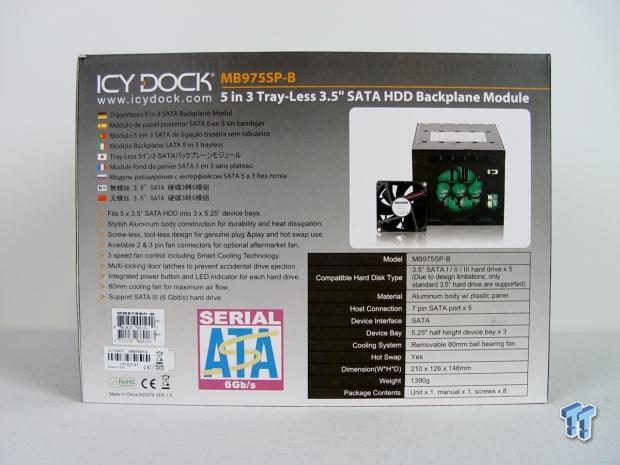 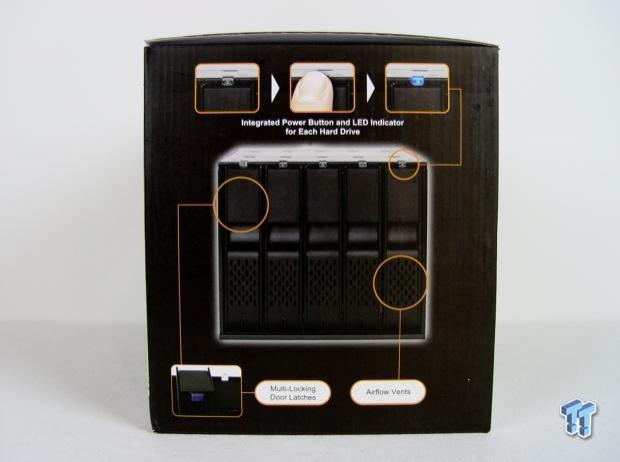 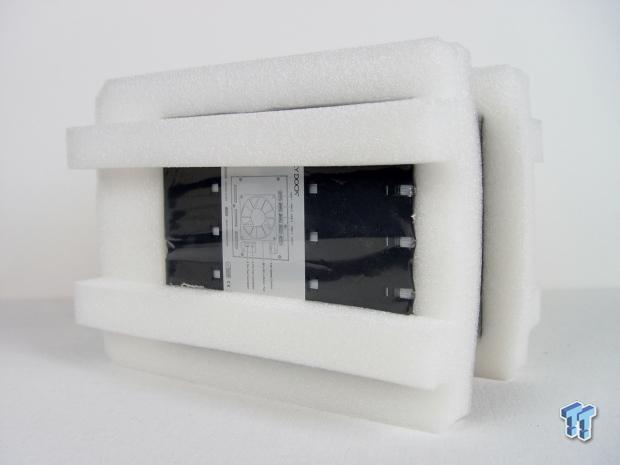 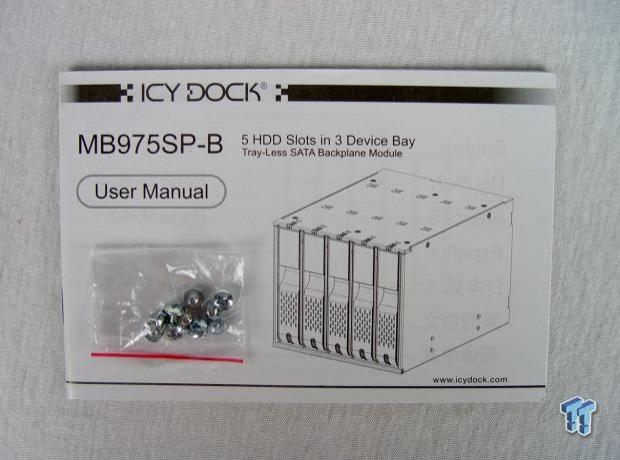 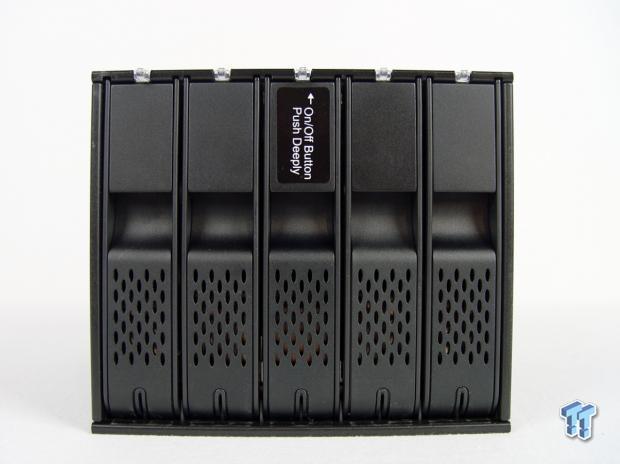 Here we get our first look at the Icy Dock FlexCage MB975SP-B. In this image, the unit is positioned as it would fit in a majority of computer cases. Our installation environment on the next page is a special configuration that positions the drive bays in a vertical position.

As the included sticker on the front of the FlexCage MB975SP-B shows, there is a button to press to power the drive in the corresponding bay. The buttons also shine a blue light via LED they also blink with disk activity. 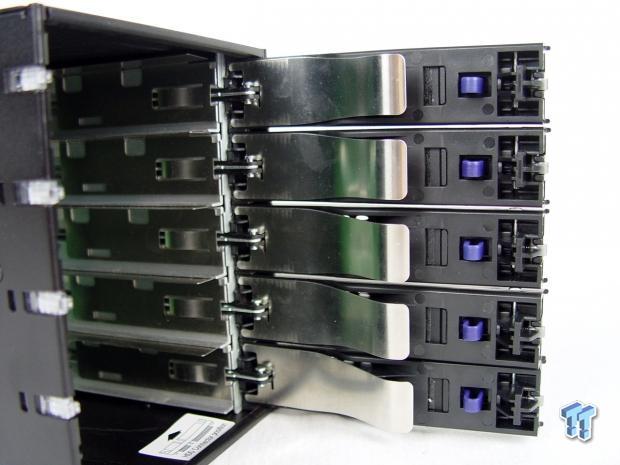 The FlexCage Series of products are tool-less. When you want to install a 3.5" HDD, you simply slide it in and close the door. The flexible metal tabs ease the drive into place and the plastic locking mechanism keeps the door closed. 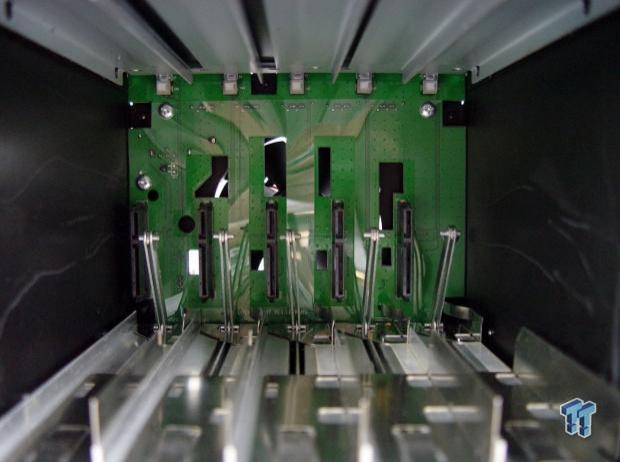 When you wish to remove the drive, you have a couple of options. The first way is to power down the computer and remove the drive after the heads are parked and the disk stops spinning. The second method it to tell Windows you're removing the drive, wait for the system to acknowledge your request, press the power button and open the drive bay door. The metal drive extractors pictured here push the drive out so you can get a firm grip on the drive and gently pull it out. 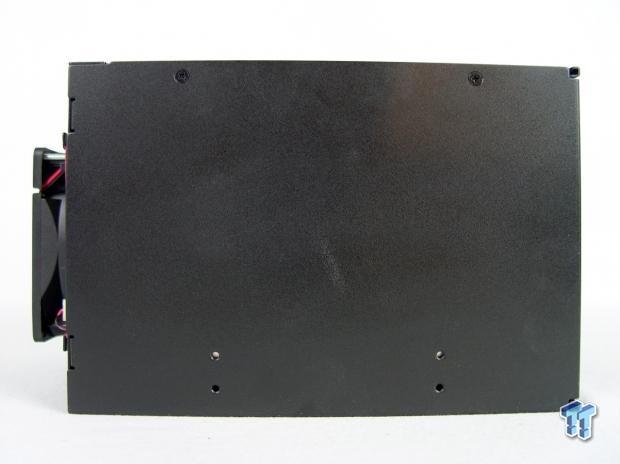 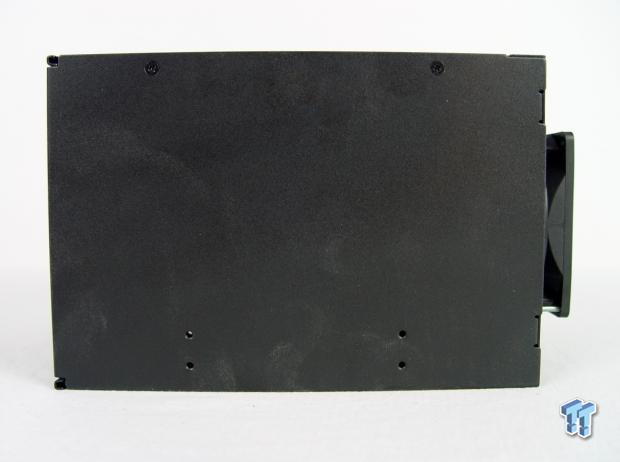 Each side of the MB975SP-B are a mirror image of one another. There is something very important here, though. The previous FlexCage we reviewed had cut outs on each side so it fit in a high number of consumer cases. Many popular consumer cases that are also tool-less have tabs to hold optical drives in place. Without the cut outs, the MB975SP-B doesn't fit in cases without bending the tabs out of the way or cutting them off... which is not recommended for resale value.

You may think this is an oversight on Icy Dock's part, but the 5 into 3 design uses the entire available width for the drives. There simply isn't room to machine slots for consumer cases on this model. 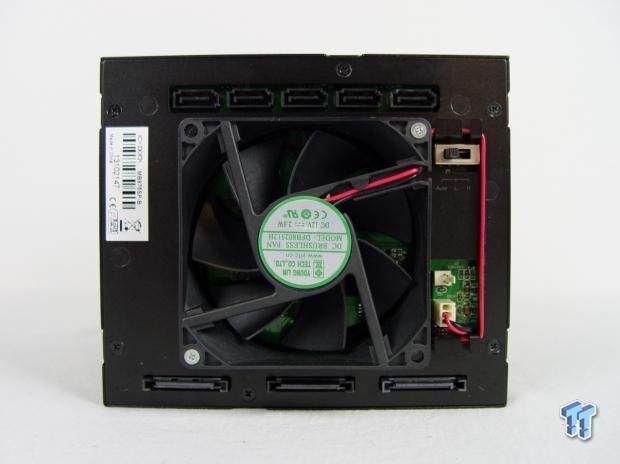 All of your connectors are on the back of the MB975SP-B. 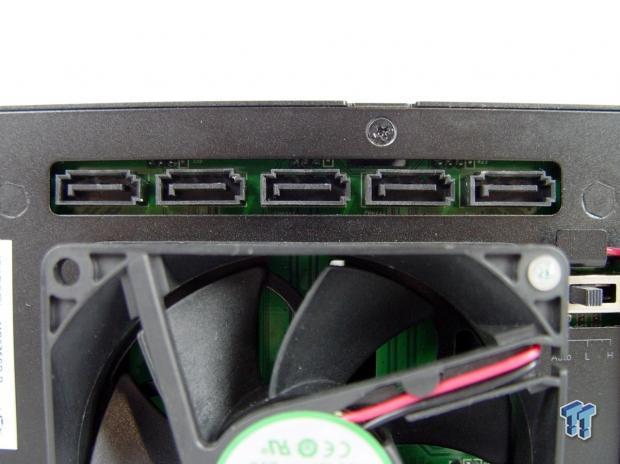 They are lined up in order and with a reasonable amount of space between each connector. 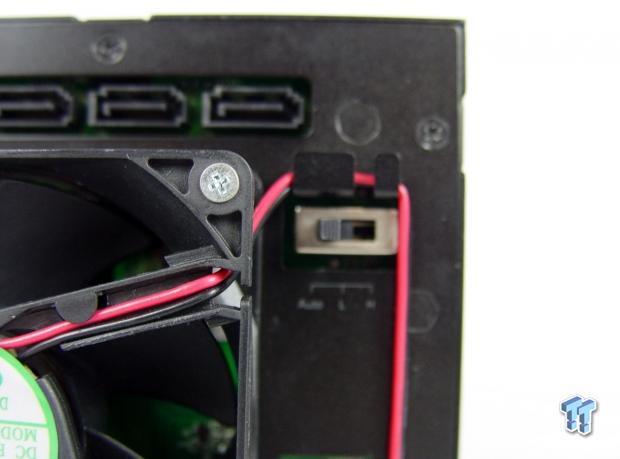 When using the system, we found the automatic fan setting worked best. The system stayed quiet even when all five bays were populated with Western Digital RED HDD's. 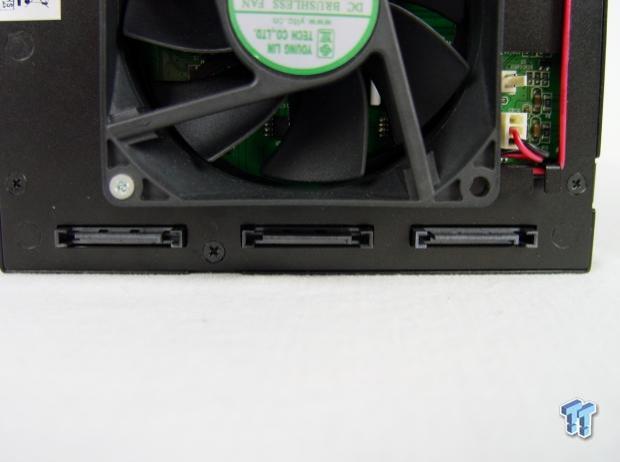 Three SATA power connectors are on the opposite side of the fan and distribute power to the system. This keeps you from pulling too much power over a single connector. 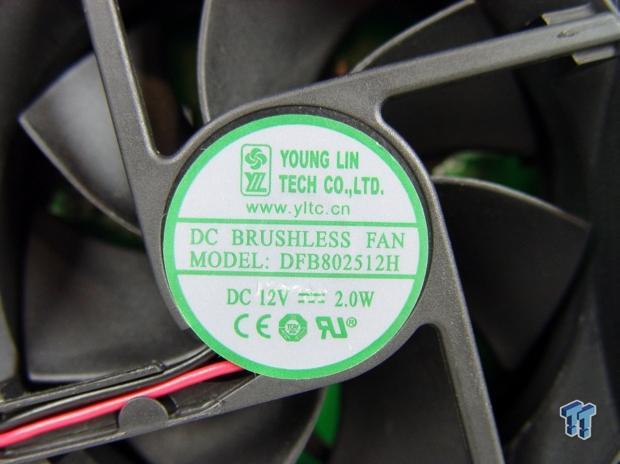 The fan is user replaceable with either a two or a three-prong power connector. As mentioned, in our testing, the included fan was quiet on the automatic setting, even with five drives in the cage. 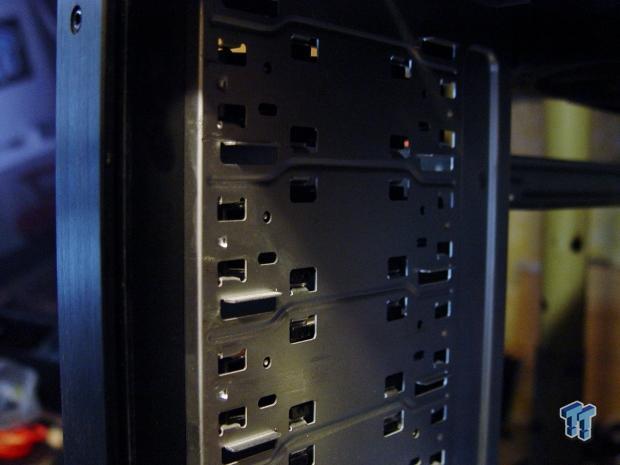 Let's knock this part out first. If your computer case has tabs like this, you will need to bend them out of the way to use this specific FlexCage. The case pictured is a Cooler Master ATSC 840, one of my favorite cases since the Cooler Master Wave Master - good luck bending those tabs out of the way. 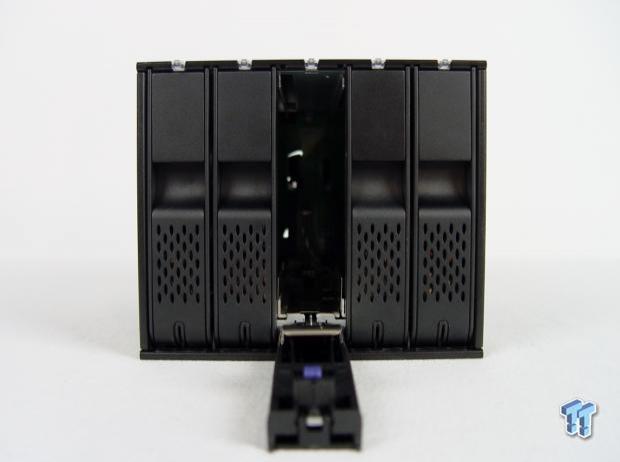 Here we see the space taken by the HDD's, there just wasn't enough room to notch out space for 5mm tabs. This specific model is the only model in the FlexCage Series that does not have the recessed area for the tabs. 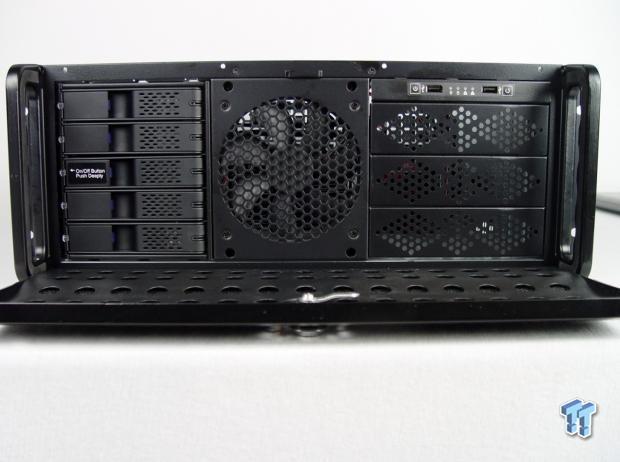 With that portion of the review out of the way, we can get to a real installation, one that doesn't require super strength. Paul Alcorn (TweakTown enterprise storage editor) and I are ramping up our enterprise coverage and Rosewill was kind enough to forward over some sturdy rackmount cases to house some of our dual Xeon E5-2600 Series servers. This server has two removable, three wide 5.25 cages filled at the factory with fans like you see in the center console. We removed the Rosewill fan/drive cage and installed the FlexCage MB975SP-B. 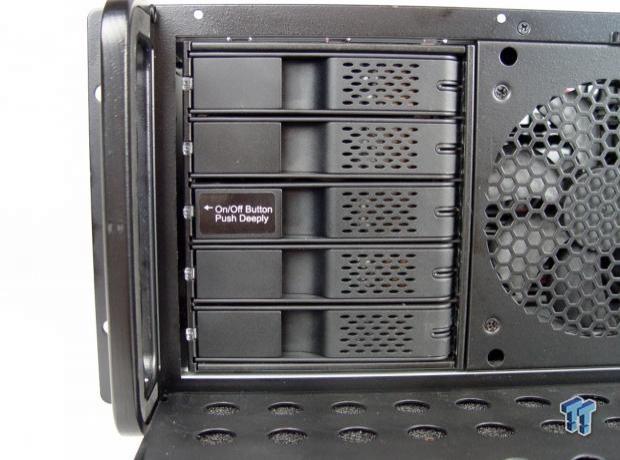 As you can see, the cage fits perfectly square in the server. I spoke about the build quality of the case, but the highest quality accessory in this picture is the Icy Dock FlexCage. This part is actually too nice to use in a server. The attention to detail matches that of expensive Lian Li or SilverStone cases. To be honest, I want another one to fill this server now. 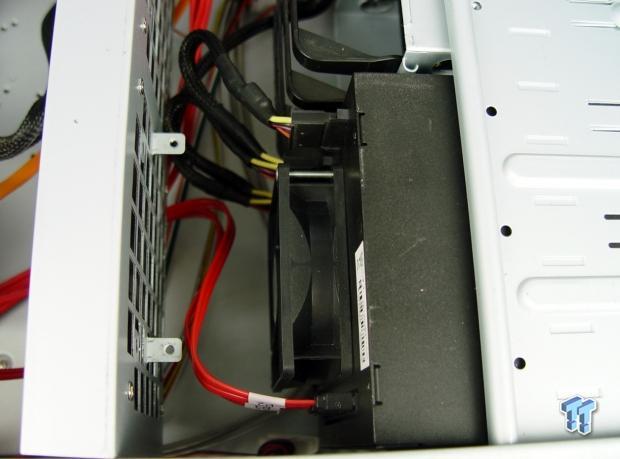 On the other side of the Icy Dock FlexCage, we see how the cables all fit into place. 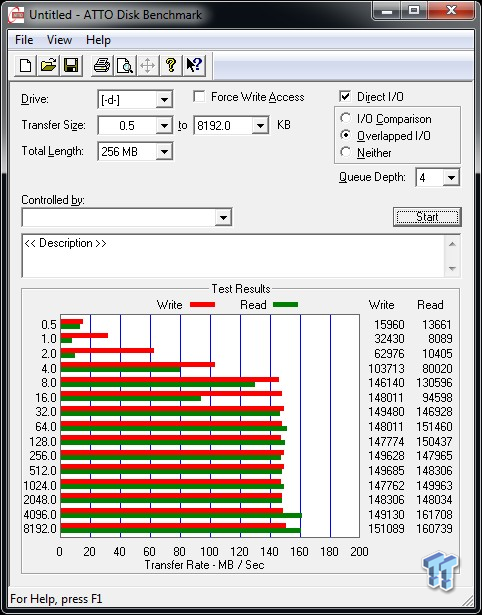 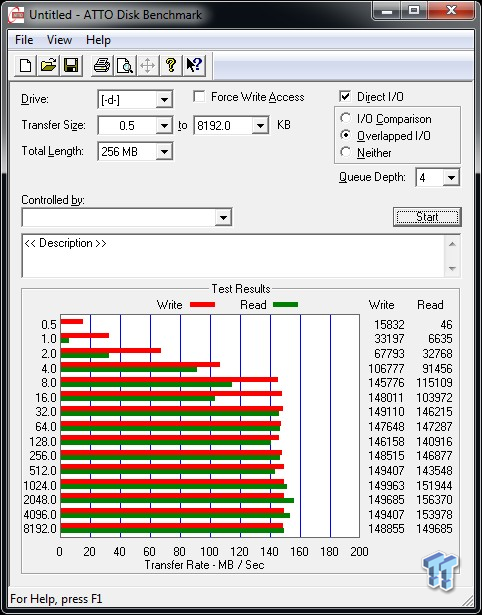 Bare HDD on the left, Icy Dock MB975SP-B on the right. 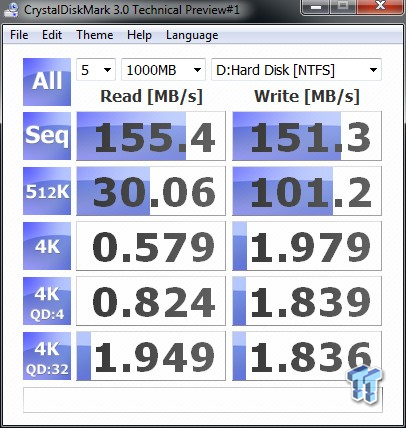 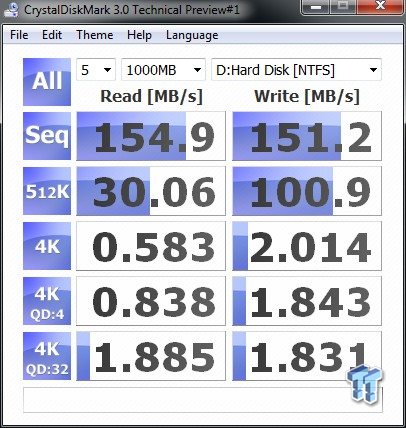 Again, bare HDD on the left, Icy Dock MB975SP-B on the right.

In our two tests we see that the Icy Dock FlexCage MB975SP-B doesn't reduce performance over a bare drive connected directly to the system via the SATA cable. 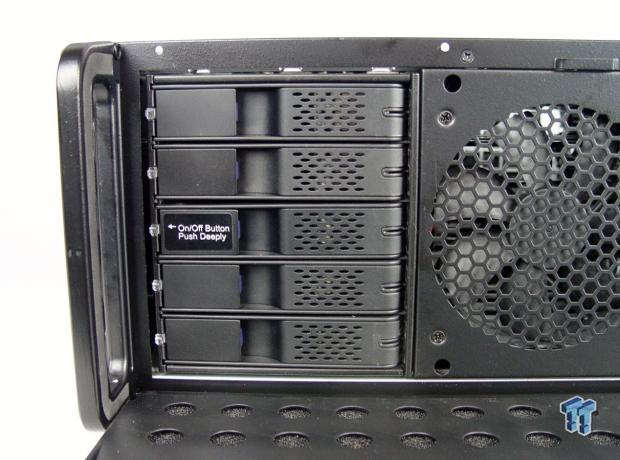 I really wish we could get our hands on the Icy Dock FlexCage MB975SP-B price because we really like it. I don't mean we like it enough to want one, or even two. We want one for every server we have and we don't even want to stop there - we want enough bays to cover all of our HDD's. Hey, I review this stuff, I have quite a few HDD's, and after working with two FlexCage products, hot swapping HDD's with the cable and sitting on the desk just doesn't cut it anymore.

It's safe to say that the FlexCage MB975SP-B will tip the scales on the lower to mid of the $100 range. The previous generation, MB455SPF-B, is on Amazon at the time of writing for $113.33. The new model has an updated modern look, SATA III compatibility and SATA power connectors rather than 4-pin Molex power. 4-pin Molex connectors are now out of favor for every component other than fans.

Assuming the FlexCage 5 into 3 adapter comes in around the $115-ish price point or so, it's a solid buy. Similar products from Sarotech, Orico, Chenbro and Norco all cost more and some cost significantly more. At this time we don't know the price though, we're tossing the $115-ish amount out as wishful thinking. Even at $130 mark, the Icy Dock MB975SP-B's quality still fills the gap. 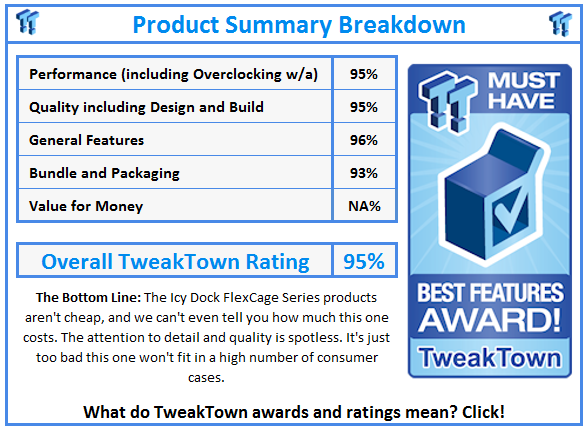