The best types of reviews are when you have no idea what to expect, which is something I experienced with TYLT. I contacted them regarding their Vu Wireless Charger for my Nexus 4 smartphone, something they couldn't get to us quickly, but they asked if we were interested in portable battery packs, to which I responded with a quick 'yes'.

TYLT was founded in 2011, and have quickly released a bunch of high-quality products. They make portable battery packs, smartphone covers, cables, speakers, NFC stickers and much more. There's quite an incredible range of goodies they have built.

Let's get to the PowerPlant itself, shall we? TYLT's PowerPlant is obviously a portable battery pack, which features a 5200mAh battery inside, with an output current of 2.1 Amps. To charge the PowerPlant to full capacity, it takes around 6-7 hours, with the PowerPlant weighing just 5.4oz, or 153 grams. Thanks to its high output capacity, it can charge smartphones from dead flat to full charges in a surprising amount of time. 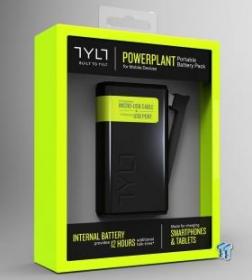 Getting into the TYLT PowerPlant itself, at first glance it is packed up beautifully. First impressions always last, and TYLT definitely wins in this department. Taking the PowerPlant out of the packaging, the device itself is beautifully made and styled to perfection. It is a glossy black device with beautiful green lights, which act as an LED battery level indicator. There are four of them on the device itself, with a button to the left which, when pressed, display the LEDs and depending on the amount of LEDs lit up - it gives you an indication of what charge is in the PowerPlant. 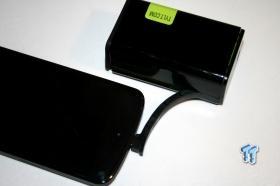 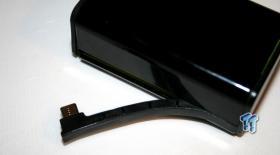 One of the very unique features of the TYLT PowerPlant is its Flex charging arm, which is on the side of the device, tucked in. When this is pulled out, it can flex to a decent degree and plug into your device. As I type this review, I'm sitting on a bus, with the PowerPlant plugged into my Nexus 4, with both devices stuffed in my bag so my phone is charging as it acts as a tethered 3G modem for me.

The Flex charging arm is a very nice addition to the already great PowerPlant design. TYLT aren't finished there, as there's a Flex port cover, too. When the Flex port cover is peeled back, you'll find the micro USB port to charge the device itself, as well as a universal female USB charging socket. This socket can be used to charge any of your devices over USB.

This means you can have an iPad or an iPhone with its own proprietary connection and plug it into this, thanks to the inclusion of charging your iOS devices over USB. This means that the PowerPlant is capable of charging pretty much all mobile devices in the world right now - nifty. It does this while strutting its stuff down the catwalk, which only helps you scream, "shut up and take my money".

How is the performance? Well, the TYLT PowerPlant packs in a very capable 5200mAh battery, which I was able to nearly fully charge my Nexus 4 and Nexus 7 devices with the PowerPlant. The Nexus 4 has a 2100mAh battery, while the Nexus 7 features a 4325mAh battery. What I was able to do, was charge my Nexus 4 from dead flat to full charge, run it down to flat again, and fully charge it once more with the juice left in the PowerPlant.

TYLT's PowerPlant isn't really meant to do this, in my opinion, it's meant to be a 'oh crap, I'm going out to dinner with my friends soon, and I forgot to charge my phone, so I'll grab my TYLT PowerPlant and charge it at the dinner table' type of device. I found the PowerPlant to be incredibly useful when traveling and keeping Google Maps open giving me turn-by-turn navigation, all without sucking my Nexus 4's battery down to nothing, like is usually the case.

TYLT currently have their products in the US, Mexico and Singapore, as well as their online store. The PowerPlant can be purchased for just $69. This is for the micro USB version. The 30-pin iOS-compatible PowerPlant is $74.99 and the Lightning-capable PowerPlant is $89.99.

TYLT have impressed me so much with their PowerPlant, the first device I've used from the company. It has me incredibly excited to test more devices, of which they have many, such as their Energi Backpack. Yes, a backpack with some incredible charging capabilities. It's the Superman of smart device accessories.