Freed from his secondment with Marvel Studios for the Spider-Man franchise, former horror director Sam Raimi returns to cinema screens for his first film in four years, helming the semi-prequel to the 1939 Hollywood classic Wizard of Oz. However, unlike that film, I strongly doubt that audiences seven decades in the future will hold the latest offering in the same loving regard. In fact, it will probably be remembered as well as the ill-considered 70's discotheque turkey The Wiz; that is - not much. 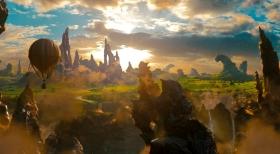 Nickel and dime magician Oscar Diggs (James Franco) travels from precinct to precinct with his carnival act, breaking hearts and making a little cash with his wondrous, yet cheap abilities which astound the less discerning crowds. His downtrodden yet loyal assistant Frank (Zach Braff) stage manages his act, but when Oscar is hunted down by the burly man for his sleazy unrequited love, facilitates his quick escape to safety via hot air balloon. But when the balloon is sucked into a forming tornado, Oscar is flung into a land significantly different to Kansas - the Land of Oz. 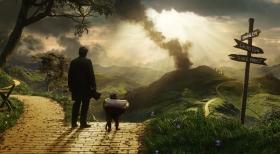 Quickly (and reluctantly) drawn into the political schism of Oz, Oscar thinks he's literally struck gold with his fortunes, but when a new threat faces Oz, Oscar will need to either become the man that Oz has foretold would save the land, or revert to his selfish and cowardly qualities.

With a nod to the original Wizard of Oz, Oz: The Great and Powerful opens in a window boxed 4x3, black and white presentation which may confuse some audiences, but like the original once the story moves to Oz, the picture opens to a widescreen presentation with gloriously eye-popping colour, more than compensating for the dark tint of 3D glasses. 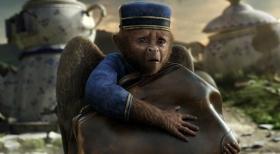 Taking its visual cues from Tim Burton's Alice in Wonderland update, Oz itself is one hand a sumptuous land of digital delights and on the other, a completely confected landscape full of the same unconvincing and floating characters and hence criticisms leveled at the likes of the new Star Wars prequel trilogy. The visual effects are certainly beautiful, but are intangible and unbelievable. You could argue that the film is meant to be overtly unreal, but I kept thinking how lovely the matte painting was, rather than how amazing the vista was. 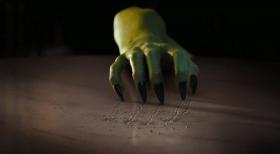 Sam Raimi is no stranger to big budget summer blockbusters and directs Oz with competence and efficiency. Whilst there is some issues with the loose editing, whose length may test the patience of younger members of the audience, the real problem with the film can be attributed to the source material; the script by Mitchell Kapner and David Lindsay-Abaire. There are precious few surprises embedded here, a paint by the numbers script with bland characters that fumbles on in a somewhat boring fashion. Characters have little to no motivation and I won't spoil the plot point that creates the films main threat - suffice to say that it's cheap, ham fisted and indescribably dumb.

The cast are generally good actors in their own right, but their stale portrayals are completely upstaged by two completely digital characters - Finley the flying monkey and the China Girl. Special criticism can be leveled at Mila Kunis for her particularly unconvincing portrayal of Theodora the witch. While she may be one of Hollywood's hottest names (and faces), she is miscast in such a pivotal role. Rachel Weisz fares better in her role, albeit in all its one dimensionality.

Unsurprisingly, Disney have already green lit a sequel, to be written by the same names, and featuring the same faces. I hope they can do a better job than here, because despite excellence in some areas, the film isn't the sum of its parts. 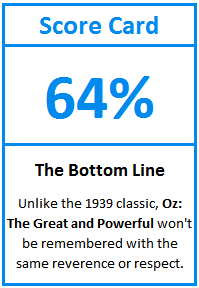