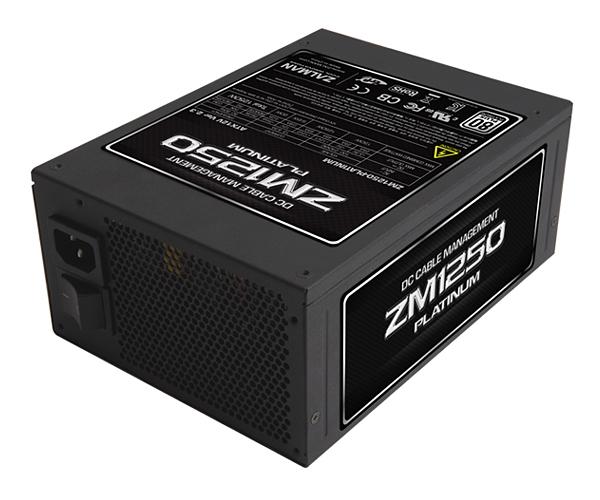 Most enthusiasts will associate Zalman with quiet computing due to their quality fans and heatsinks, but they have much more to offer beyond that. In fact, there will be many who read today's article that aren't even aware Zalman is a competitor in the power supply market. Almost two years ago, we took a look at one of their units and it has been long overdue that we take a look at another.

Zalman isn't like many other companies that turn out product after product and rotate their lineup on a rapid timeline. Their units are built with quality from the start and are meant to last, which is why we haven't seen much from them in the way of power supplies since we took a look at the ZM1000-HP Plus.

The unit we are looking at today is the ZM1250 Platinum. As the name suggests, it is a 1250W power supply rated for 80 PLUS Platinum efficiency. It promises quite a bit all the way around, so let's start digging into it to find out just what all it has to offer and how well it performs. 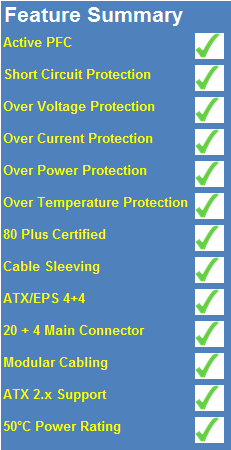 Just as we would hope out of such a high-end unit, Zalman makes sure the ZM1250 Platinum is packed full of features. All protections are present, including Over Temperature Protection. All natively wired cables on the power supply are fully sleeved in nylon mesh while all modular cables are of the flat ribbon type. The ZM1250 Platinum is rated for 80 PLUS Platinum efficiency as well as 100% continuous output at 50C.

Zalman has an MSRP of $299.99 for the ZM1250 Platinum. Usually we can find somewhere online selling the power supply cheaper, but that wasn't the case with the ZM1250. We actually couldn't find it for sale anywhere though we suspect that this is due to some listing errors on multiple websites since we were able to find several other units of theirs available and it has been on the market for many months. Zalman backs the ZM1250 Platinum with an industry standard five year warranty. 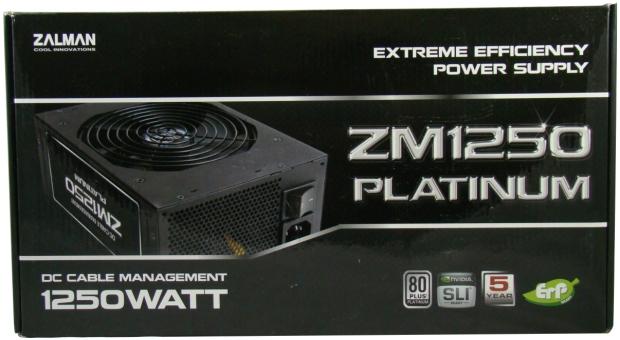 The front of the box gives us a decent amount of information on the ZM1250 Platinum. Aside from the wattage, we can see that the unit has modular cabling, a five year warranty, SLI ready, and 80 PLUS Platinum certified. 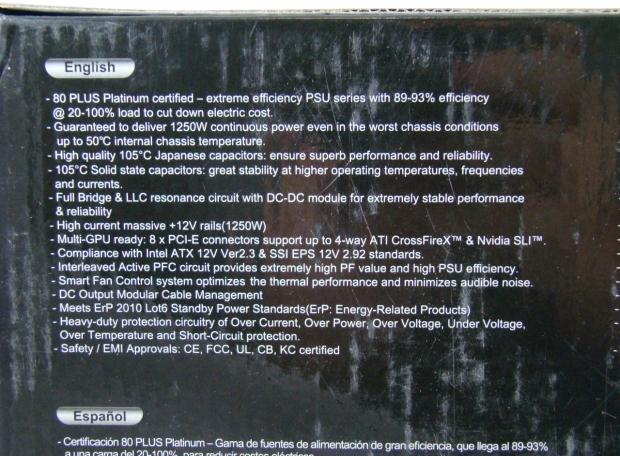 Moving to the back, we find a list of features in multiple languages. The information is pretty standard for the most part, but we do see that it will support quad GPU's. 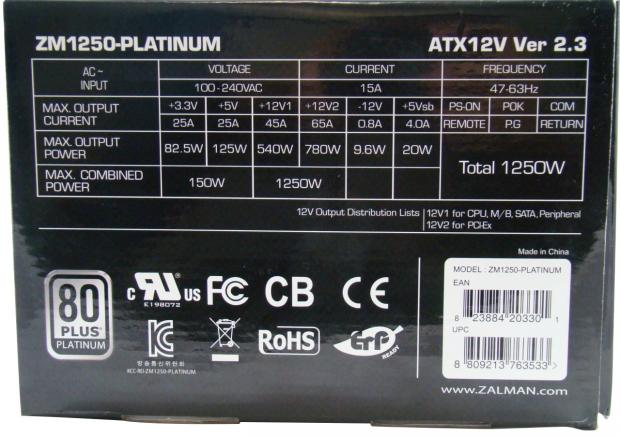 One side shows us the I/O specifications for the power supply and even gives us the rail distribution for the two 12V rails. 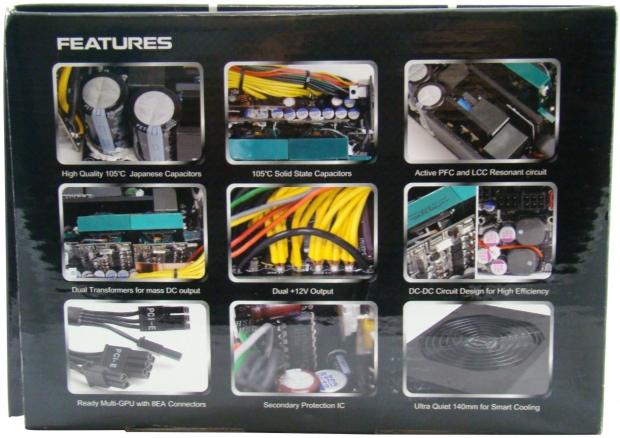 The other side gives us a pictorial view of the features highlighted on the back of the packaging.

The top and bottom are identical and contain no information other than the URL for Zalman's website. 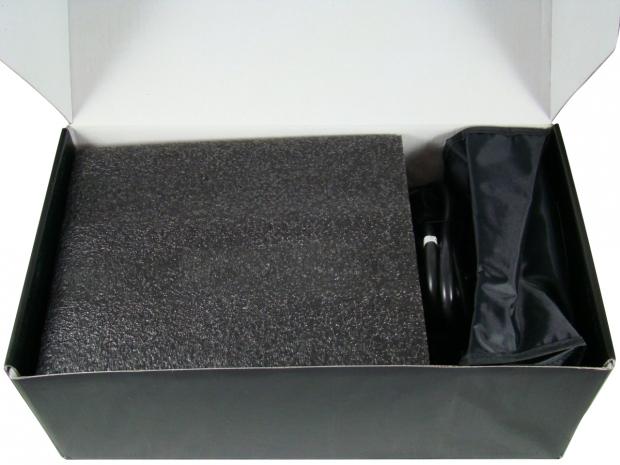 Everything is packaged well inside the box and the power supply is surrounded by at least a half inch of foam on all sides. 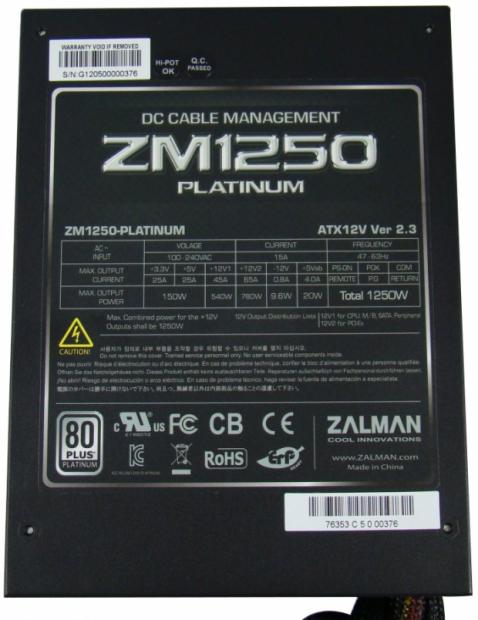 The top features the I/O specification label and serial number of the unit. Zalman also lists the rail distribution here, which is nice to see.

One side of the ZM1250 Platinum is completely blank, but the other side features the ZM1250 logo stickered to it. 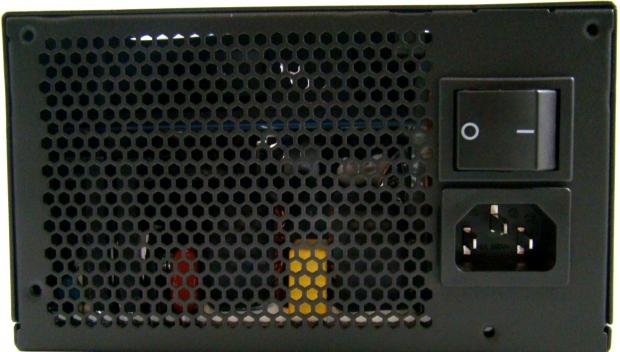 Things are pretty standard on the back of the unit with an on/off rocker switch and honeycomb mesh grill. 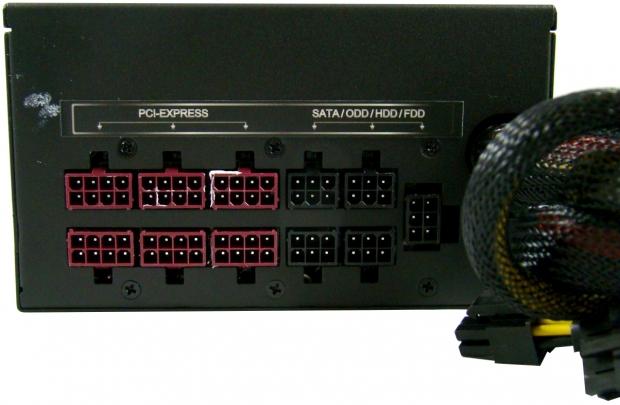 The modular connections are found on the front and the PCI-E connections are separate from the peripheral connections. The adhesive that is on here is as the unit came out of the box. It rubbed off with our fingers without issue and we suspect it was stuck on someone's hands as it was moving down the line. 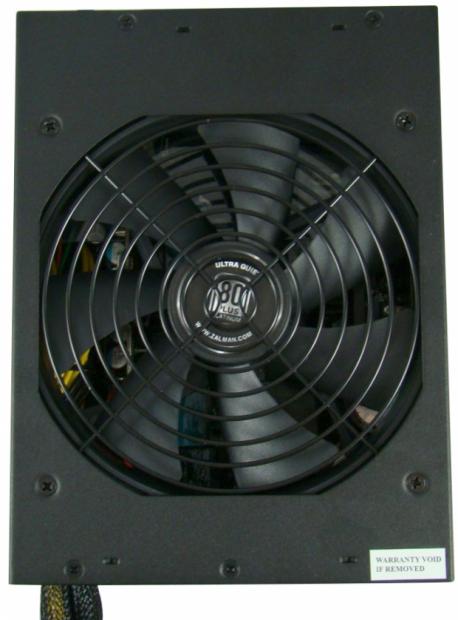 The bottom of the unit houses the 140mm fan that provides cooling for the Zalman ZM1250 Platinum power supply. 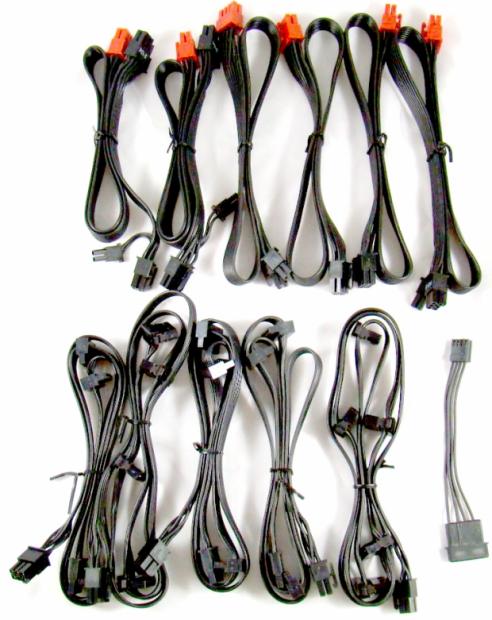 While all the native cables are fully sleeved with nylon mesh, the modular cables are of the flat ribbon type. 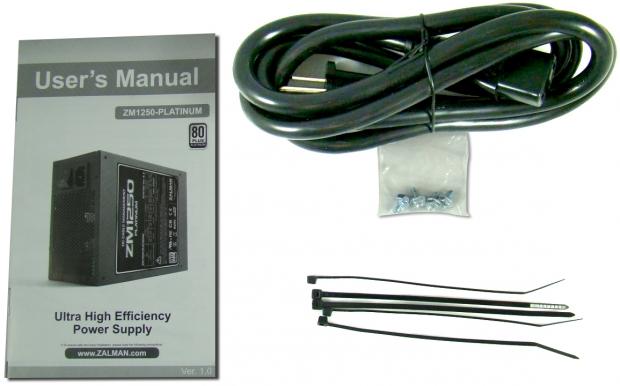 Zalman provides a great selection of cables to go along with the ZM1250. Dual ATX 4+4 and EPS12V connectors are available for those who need it, though it would be nice to see one of these available as a modular connector so that excess cabling could be removed if it isn't needed.

Two different types of PCI-E cables are provided. Two of them have dual PCI-E connectors while the other four feature only single connectors. Peripherals are handled via 12 SATA connectors over three cables and nine Molex connectors over two cables. There is a single FDD adapter included should it be needed.

Rail distribution is simple for a dual rail power supply. The first 12V rail provides power for the CPU, motherboard, and all peripheral connections. The second 12V rail handles power for all PCI-E connections. It doesn't get much simpler than this and is spelled out on the I/O specification label for the user. 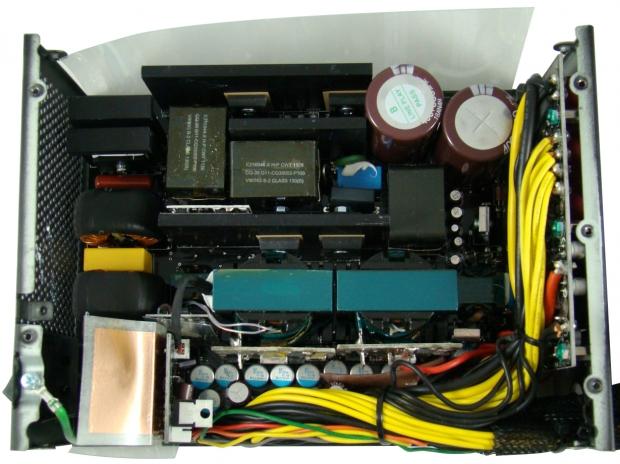 Passive cooling is handled via multiple heat sinks around the unit. There isn't any fancy heat pipe cooling like we saw with the ZM1000-HP Plus, but rather solid pieces of aluminum to draw the heat away. 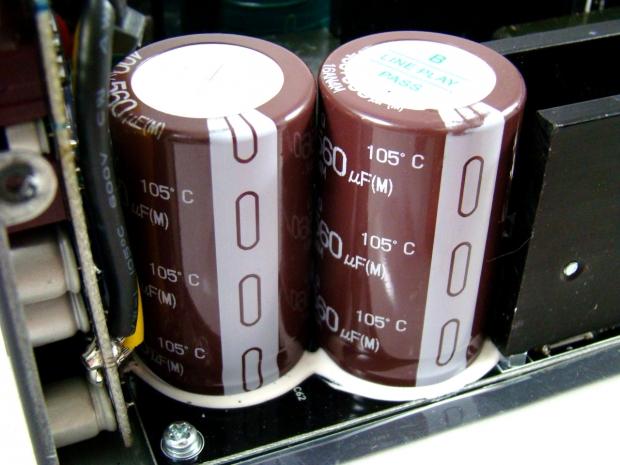 A pair of Nippon Chemi-Con capacitors reside on the primary side of the Zalman ZM1250 Platinum power supply. 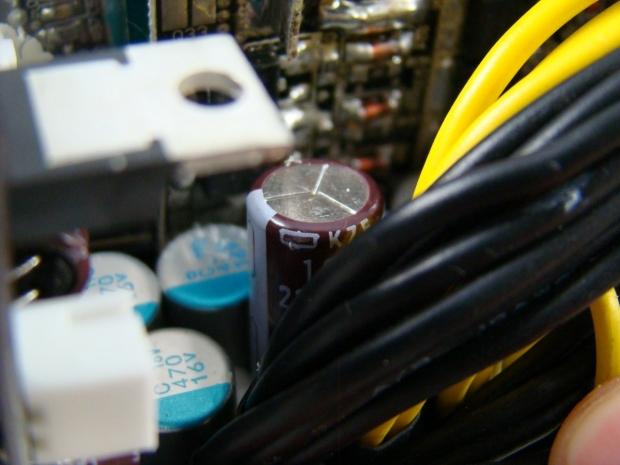 More Nippon Chemi-Con capacitors are found on the secondary side as well. 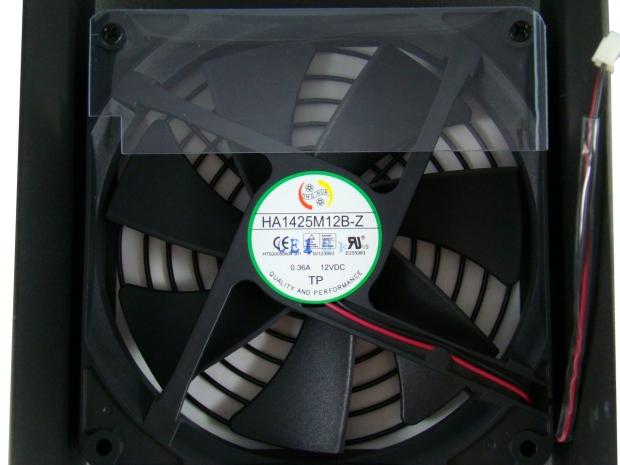 The tests performed are based around six conceivable setups that are out there and progressively load down the PSU up to the power supply's limits or 1000W, whichever comes first. Since our test equipment's limits are lower than that of the Zalman ZM1250 Platinum 1250W power supply, we can only test it to 1000W.

DC Output quality for the ZM1250 Platinum 1250W was great and well within specification. During Test 1, we saw 16mV of noise on our scope. When we increased the loads in Test 3, the ripple climbed to 23mV at a little under half load. During Test 6 under a load of 1000W, the oscilloscope showed a maximum of 39mv on noise on the 12Vrail.

The Zalman ZM1250 Platinum 1250W power supply is a quality unit inside and out, there is no doubt about it. Most couldn't ask for more out of a power supply and the ZM1250 Platinum delivers where it matters most as well. The voltage regulation, DC output quality and efficiency are all top notch and make it a solid contender with those such as Antec, Cooler Master, PC Power & Cooling, and many others.

Aside from a little bit of spilled adhesive on the outside of the unit, we couldn't find anything to complain about with the power supply itself. The five year warranty is nice, but we all know that Zalman could easily warrant the unit for seven years instead and it wouldn't affect them any.

The big downfall of the ZM1250 Platinum comes when you consider the price. At $300, it is a very expensive unit and one of the most expensive sub-1300W units on the market. With current rebates, it is only $10 less than Corsair AX1200i.

It is a shame to see such a price tag ruin a good unit, but that is what it comes down to with the ZM1250 Platinum. It has everything needed to make it a great unit with the exception of value. Once it comes down in price a little bit it will be a much stronger contender in the power supply market. 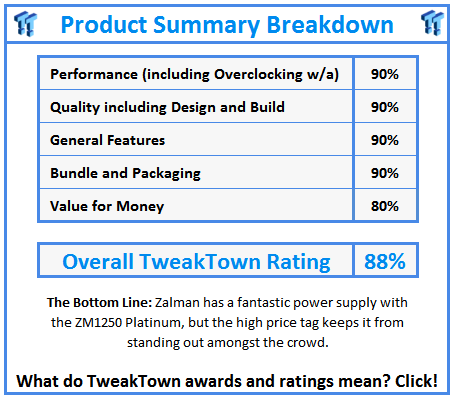