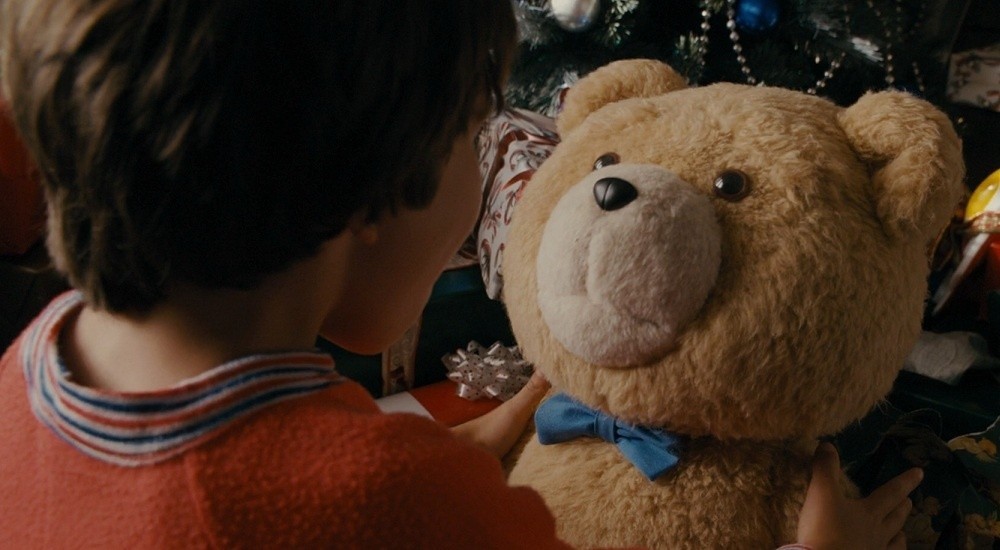 Seth MacFarlane seems to be popping up everywhere these days; be it from Family Guy to American Dad, to voice work in unrelated TV shows and features, and even a big band / jazz studio album. Now, he moves to uncharted waters - a big budget cinema outing in his directorial debut, Ted.

Ted is an off the shelf everyday teddy bear owned by the young John Bennett (Mark Wahlberg) until he's wished into reality and becomes a living, breathing bear. Rather than being hidden away, Ted becomes a pop culture icon, with appearances on TV, adored by the public. Flash forward 30 years, and John and Ted continue to live it up, despite never growing up. John has a dead end job at a car rental store, and Ted continues to be his best friend - which means copious drinking, babes and drug use. John's girlfriend Lori (Mila Kinus) is getting fed up with the influence of Ted on John's life and hopes that by cutting him loose, John will man up, giving him the ultimatum - her or the bear.

How the world accepts that a Teddy bear can come to life, become a celebrity and not destroy itself in the process is slightly beyond me, but hey, it's a film. Ted is a slick product and audiences raised on Family Guy will know what to expect to a certain degree. However, despite its envelope pushing humor, and 'you-can't-say-that-on-TV' language, Ted is a far more conventional feature film than its television counterparts.

Since MacFarlane's shows are conducive to no more than short bursts, it's no surprise that the 106 minute long feature is not without its lapses. The film sags at the halfway point, worsened by the films subplot featuring Giovanni Ribisi and Aedin Mincks as father and son stalkers. Their sequences would certainly have been cut (and should have), had they not been the catalyst for the films climax.

I enjoyed Ted, despite its lack of transparency in attempts to provoke its audience. But even when the initial shock of seeing the seemingly friendly bear utter absurd profanities wears off, there is still enough charm in the character and strong performance by Wahlberg to retain attention.

The Blu-ray gives viewers the option to watch the original theatrical cut, or a seven minute long extended cut with even more obscenities, but a nice addition to the Donny theft subplot where Ted discovers a pile of dismembered teddy bears in the basement. 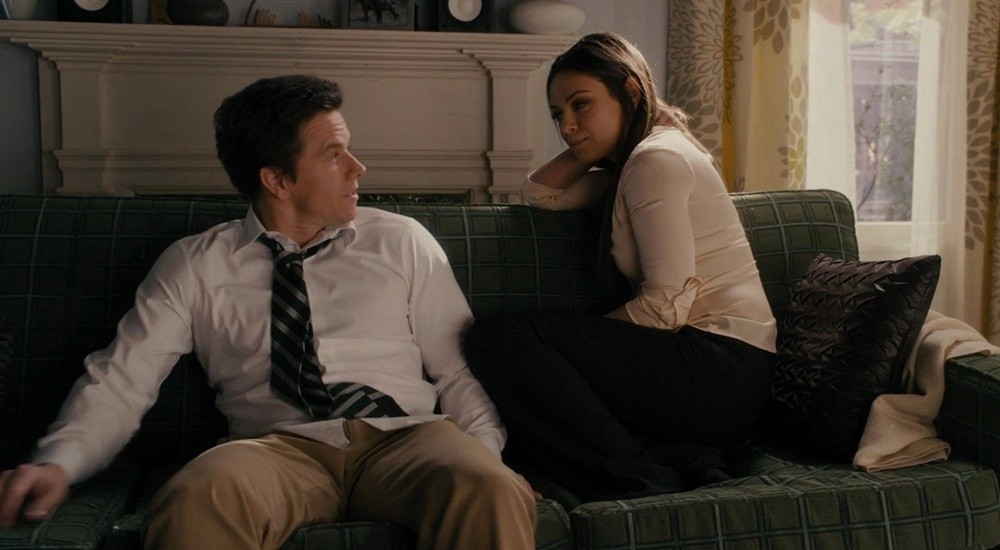 Ted is presented in the original aspect ratio of 1.851, encoded with AVC MPEG-4 compression.

I feel like a bit of a scratched record these days, but for a recent film, lensed on top of the line 4K digital cameras, there comes with it an expectation that it will look spectacular on a down-sized 2K transfer. And that's what Universal provides.

The production design lends itself to some bold and vibrant colors, making for a pleasant visual palette. The image is crisp and clear and bereft of any video nasties.

A pleasing transfer, but one which perversely shows up some of Universal's less pleasing catalogue titles.

For a dialogue heavy comedy such as Ted, I don't think anyone should be expecting an aggressive new demonstration disc. That said, the film sounds pretty good, albeit conservatively confined to the front soundstage for the most part. There is some slight leakage to the rear speakers on occasion, with some general ambience mixed at a relatively low level, and to support the big band themes provided by Family Guy composer Walter Murphy.

The subwoofer is irregularly called in to provide some boom to some of the more action oriented sequences, but for most of the film it will probably shut itself off. 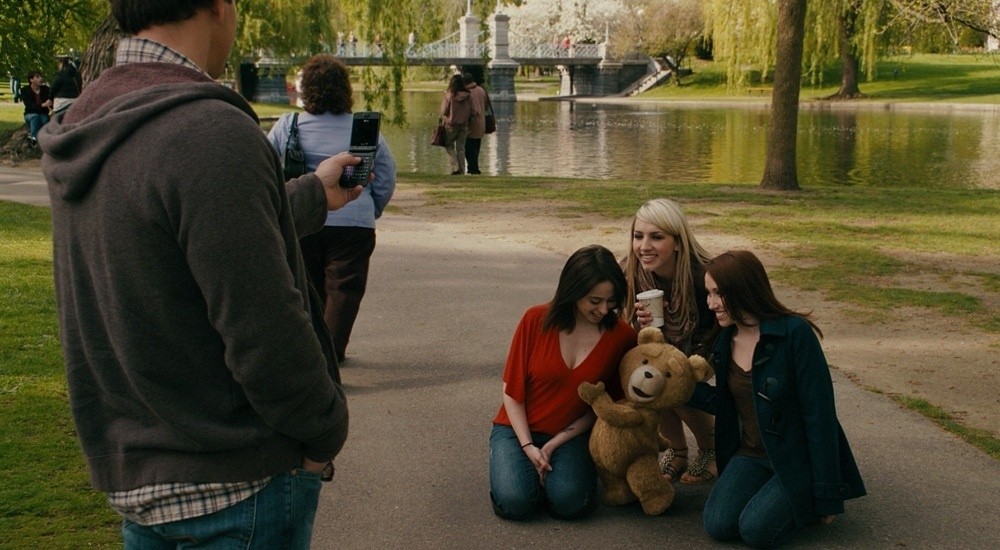 Ted features a solid range of extra features that are more a case of quality than quantity. Let's dive in.

First up is the Audio Commentary featuring Director and Writer Seth MacFarlane and an extended guest cameo by Mark Wahlberg. Seth is an extremely smart, funny and articulate guy. The back cover refers to the track as "an audio commentary you'll actually want to listen to". I'd concur with that statement.

The 25 minute Making of Ted featurette split over three parts is substantive enough to please fans, without going too in-depth and thus remaining interesting for casual fans. Of particular interest is the look at shooting with Seth MacFarlane standing in as the voice of Ted on-set, along with the puppet and blank plates. This is also investigated further in the making of the hilarious fight scene in the short Teddy Bear Scuffle featurette.

Next is a further 15 minutes of Deleted Scenes that weren't integrated into the extended cut, and a further 11 minutes of Alternate Takes which provide slightly different variants of scenes in the film.

Finally, we have a six minute Gag Reel which is unsurprisingly pretty funny. 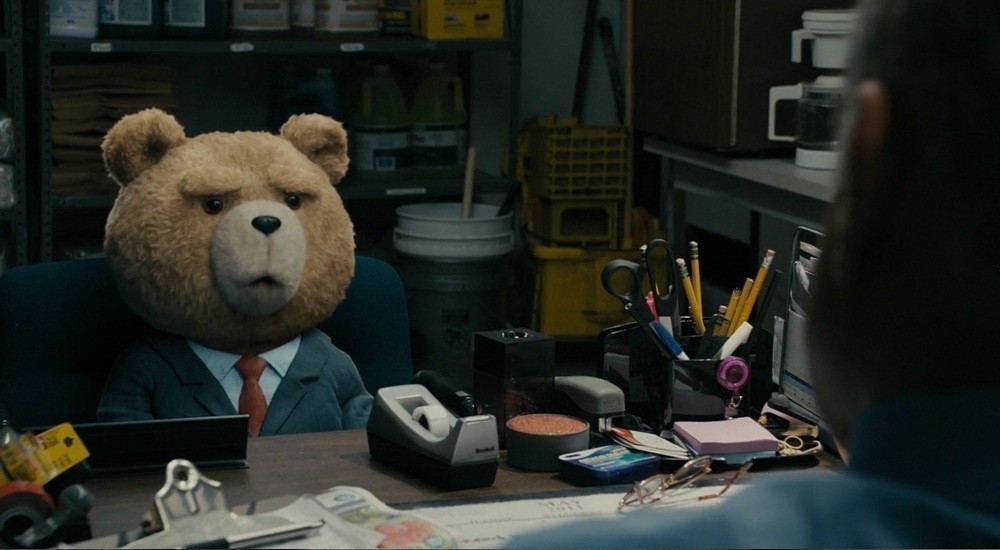