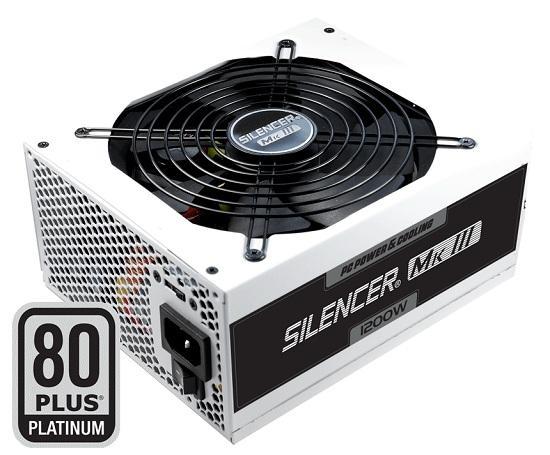 PC Power & Cooling is often a brand that many enthusiasts turn to when a system dictates the need for quality power and lots of it. Its name is often synonymous with performance and reliability, proven by the legendary Turbo-Cool series and multiple iterations of the Silencer series.

We've taken a look at both the Silencer 760W and Silencer Mk III 600W power supplies and neither of them left us disappointed.

We'd been hoping for another high-wattage unit from PC Power & Cooling for quite some time and when they showed off the Silencer Mk III 1200W at Computex back in June, we couldn't wait to get our hands on one just to see how well it performed.

Modular cabling, single 12V rail, silent operation and 80 PLUS Platinum levels of efficiency; the unit just seems to offer everything. Now it is here and it's time to see just what it has to offer. Let's dig right into the output specifications see what else we can find.

The Silencer Mk III 1200W power supply provides 12V power via a single rail design rated for 99.5A or 1194W. Both of the minor rails are rated for 20A each with a combined maximum output of 100W for the 3.3V and 5V rails. This left us scratching our heads a little bit as even the Silencer Mk III 600W had stronger minor rails, but it should still be plenty of power. The 5VSB rail is rated for 2.5A or 12.5W which is also a bit lower than what we normally see. 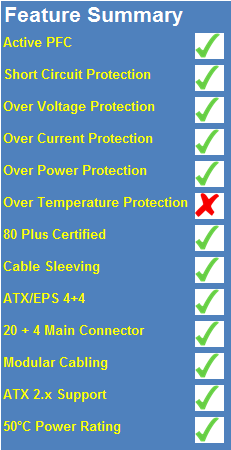 When taking a look at the features and protections of the power supply, we expected to be able to report everything was here. While going through the protections offered, we found that Over Temperature Protection wasn't listed. We were sure that this had to be a mistake; however, OCZ informed us that OTP was not included with the Silencer Mk III 1200W. Aside from OTP, the unit offers everything else. Sleeved native and modular cables, 80 PLUS Platinum efficiency, and being rated for 100% continuous output at 50C round out a solid list of features.

The PC Power & Cooling Silencer Mk III 1200W power supply has an MSRP of $299. Some poking around on the web shows that not many are offering the unit much, if any cheaper. Tiger Direct does have the unit for sale for $289.99, but after shipping of $9.16, that still raises the final price to $299.15. Many will be pleased to know that while the 600W model only carries a five year warranty, the new 1200W model is backed by a solid seven year warranty. 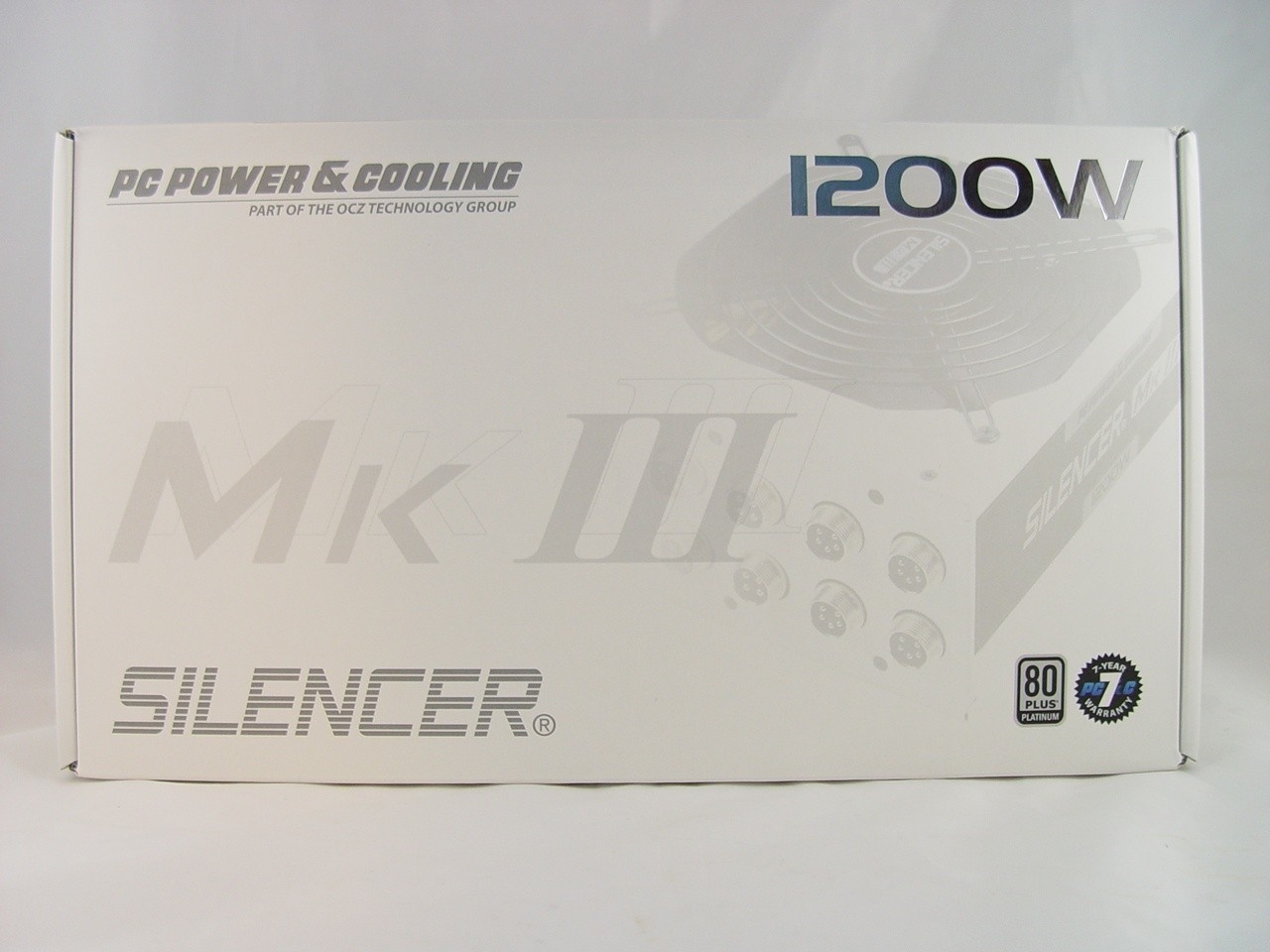 Little has changed with the packaging for the Silencer Mk III 1200W power supply, but we do see updated 80 PLUS and warranty logos on the front. 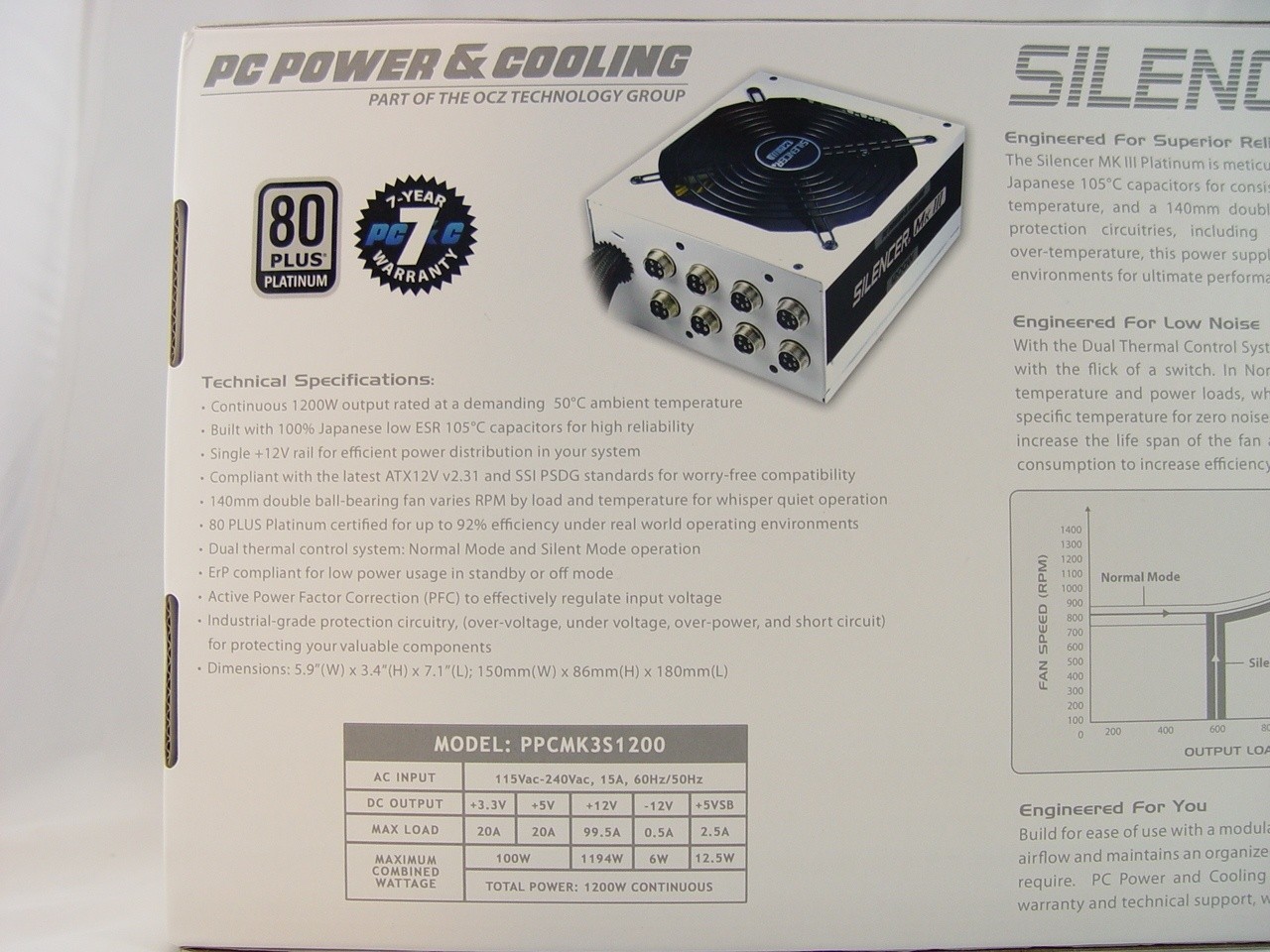 Turning things around, we find a bit more information as well as a full color shot of the power supply. Aside from the specifications we have already covered, the box also lists "Dual thermal control system: Normal Mode and Silent Mode operation." We'll get into that in the next picture. 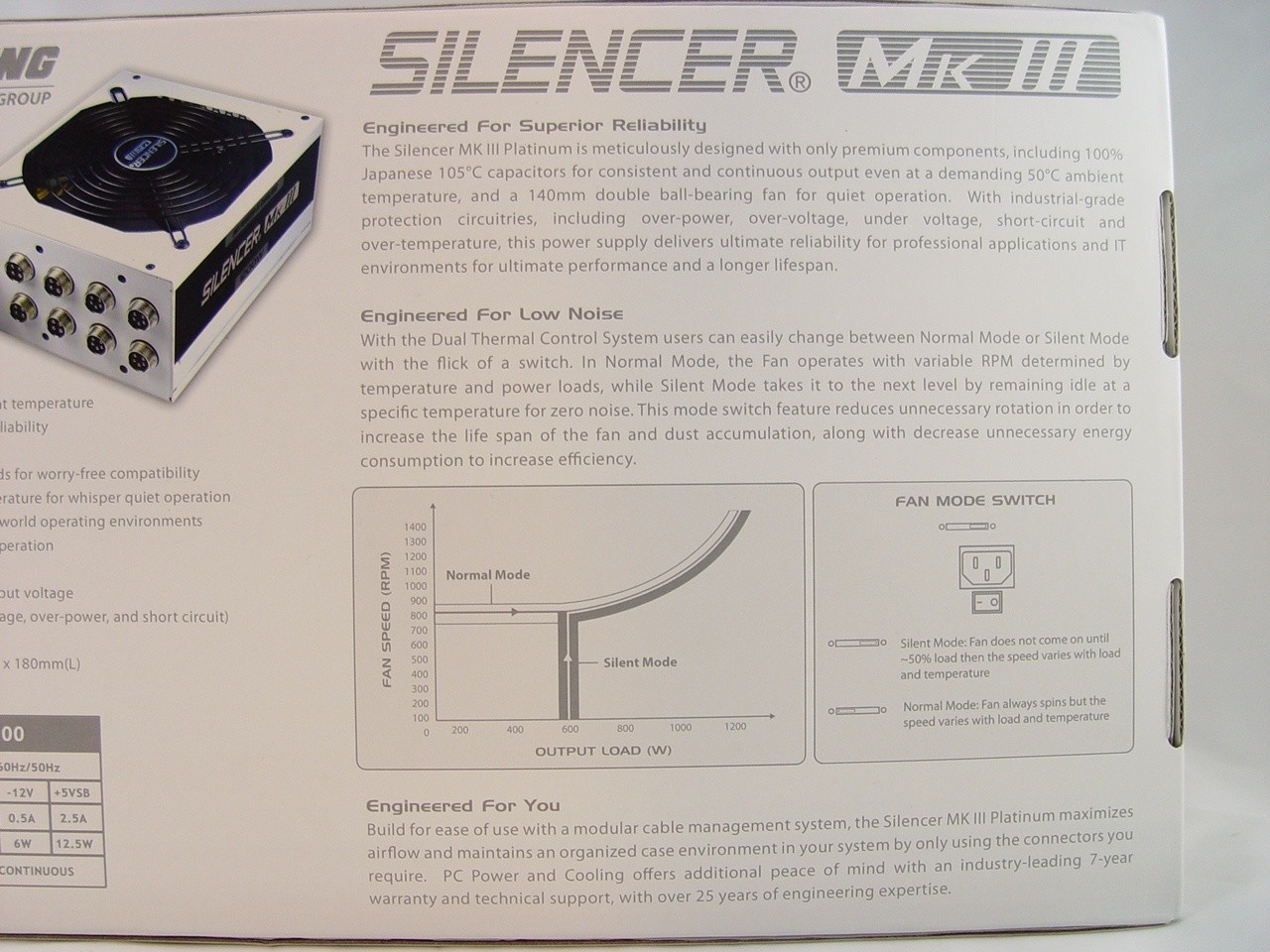 The other half of the back explains more about the dual thermal control system. You can set the fan mode to Silent Mode or Normal Mode. Normal mode ensures that the fan is always running and thermally controlled. Silent mode forces the fan off until the unit reaches 50% load at which it then becomes thermally controlled. This is made easy by the selector switch on the back of the power supply. 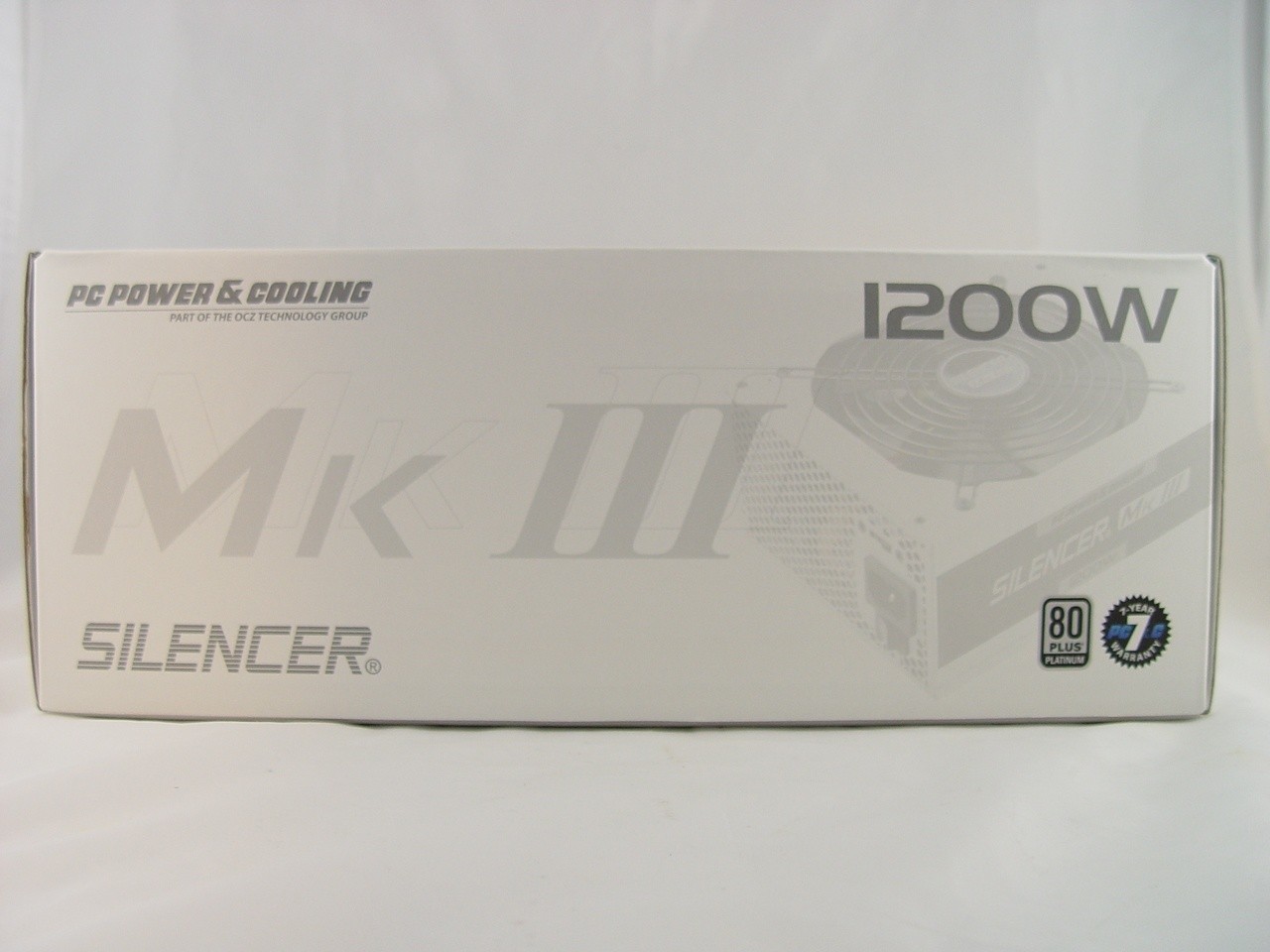 Both top and bottom mimic the front of the box. 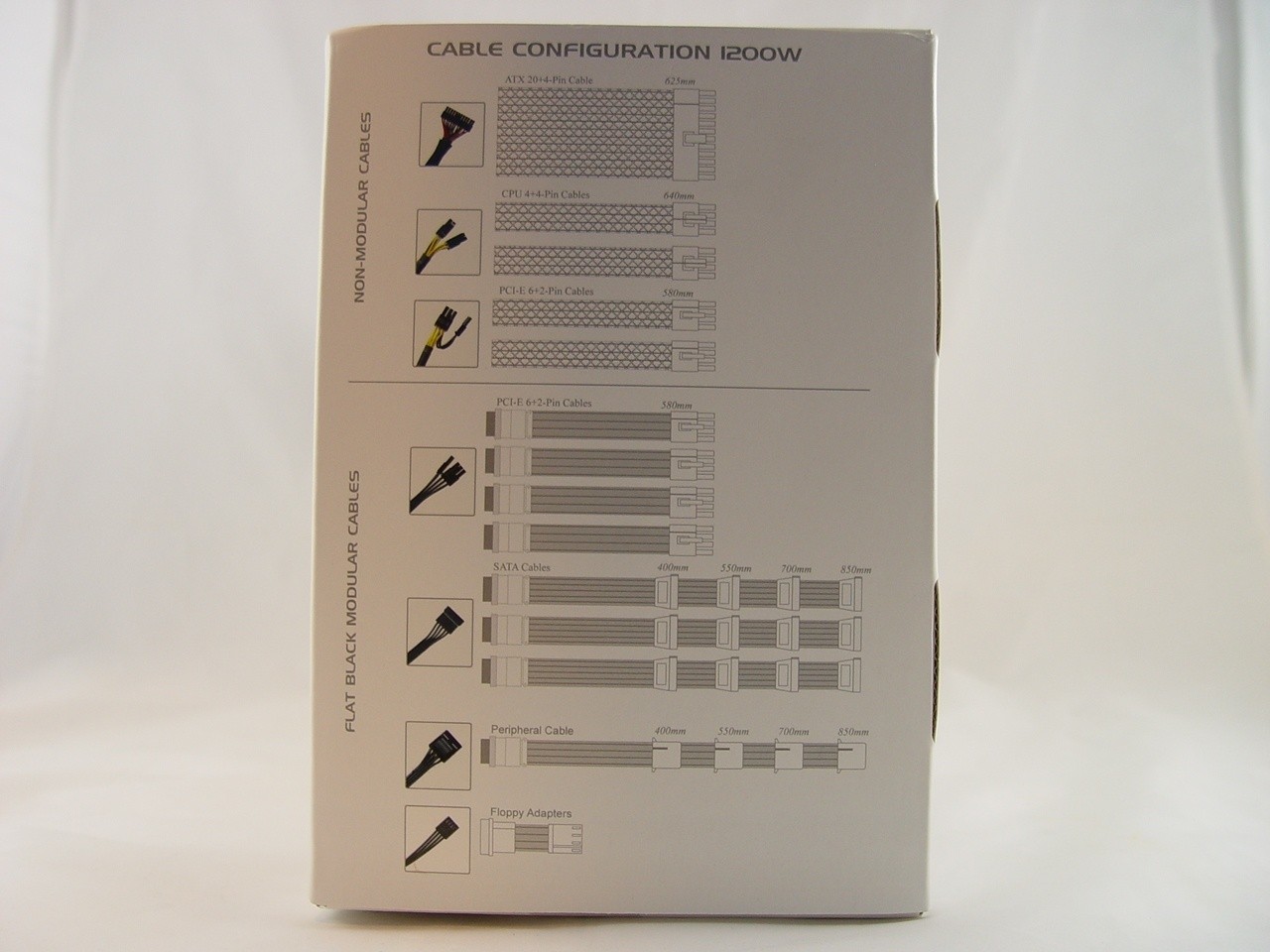 While one side of the box is rather bland, the other does contain a great list of cables and their length. 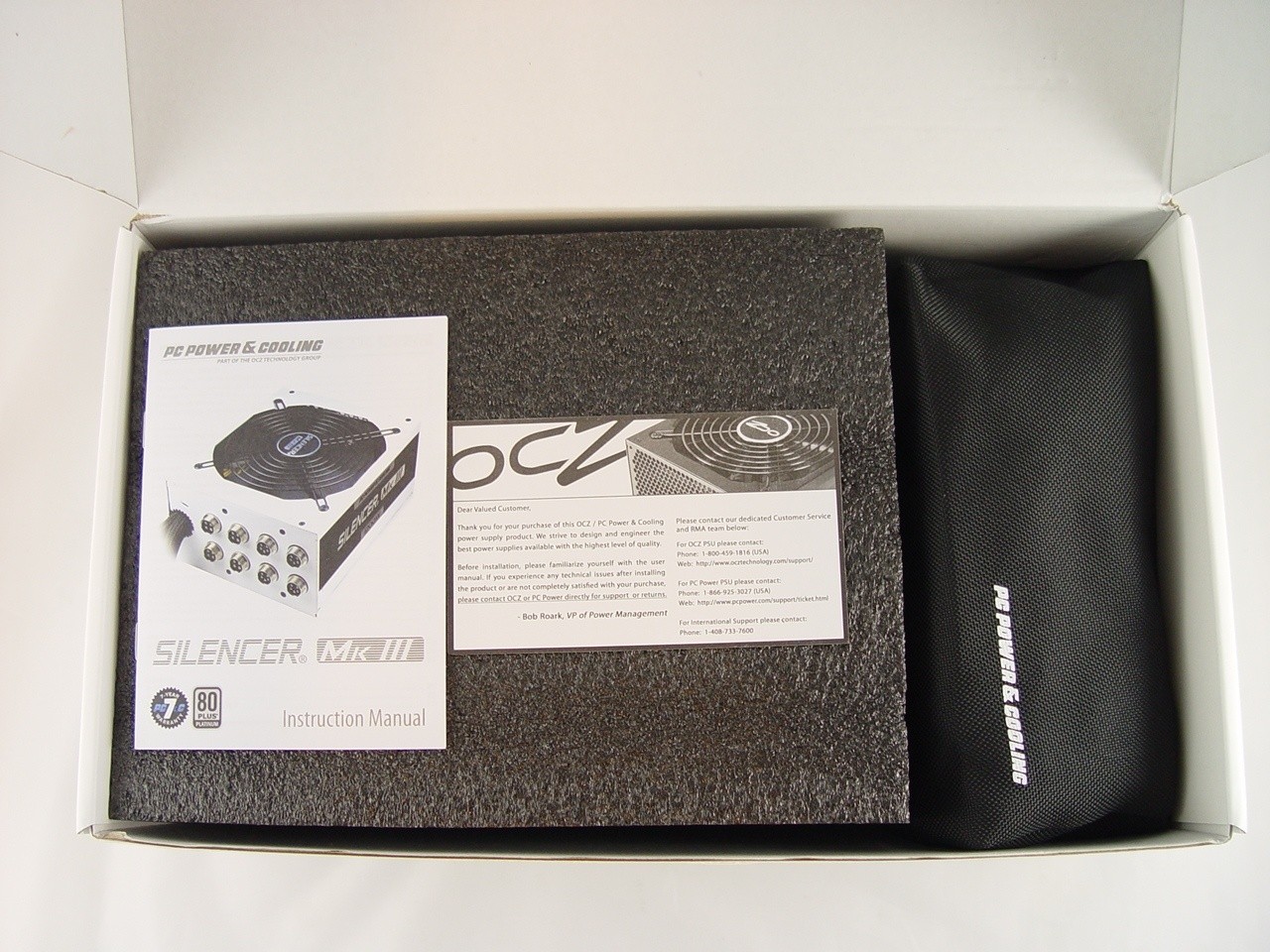 Opening the box we find things seem to be well packed. Thick foam surrounds the power supply on all sides. 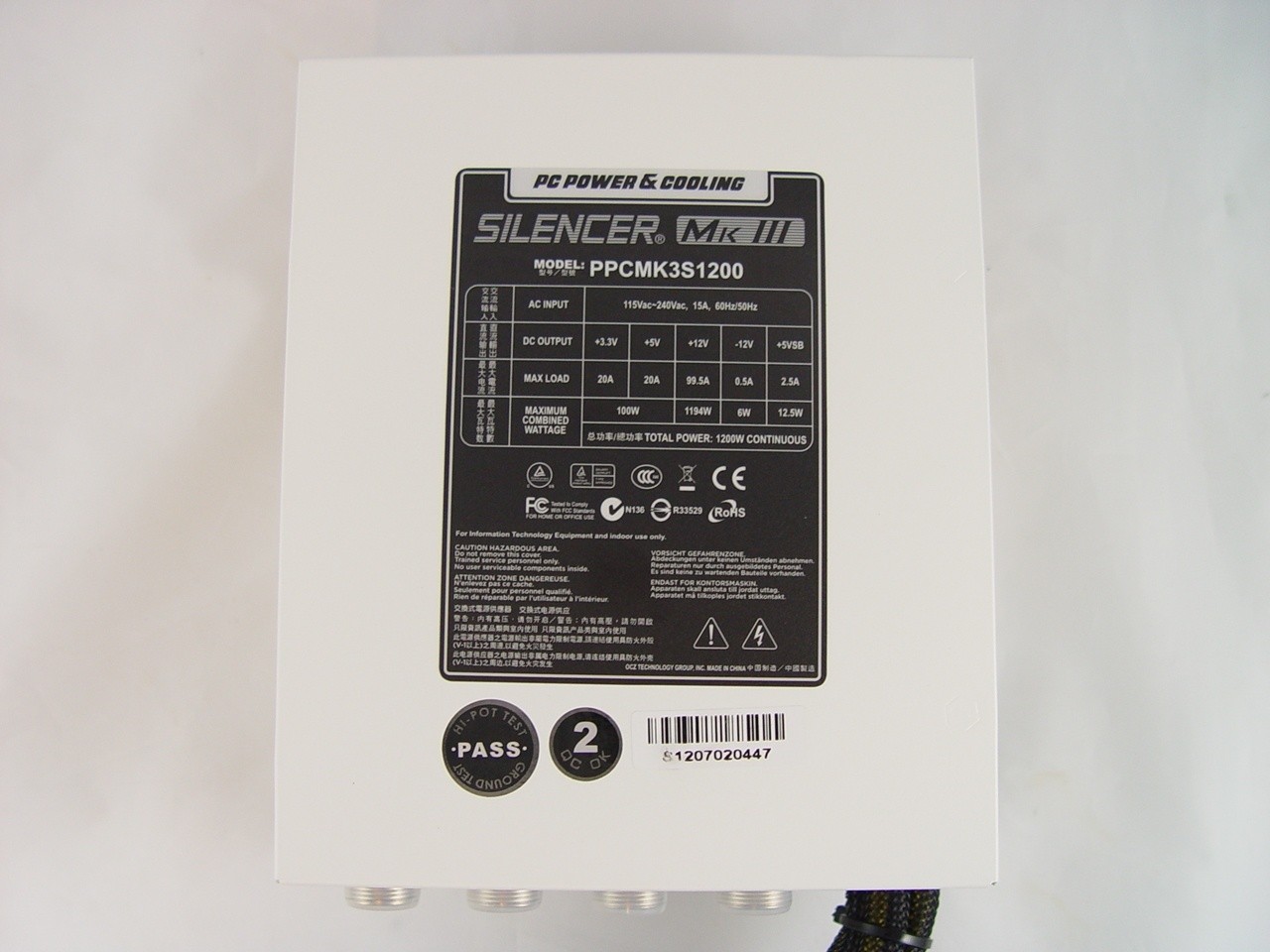 The top features the I/O specification label as well as the serial number. The unit is pure white so make sure your hands are clean when handling the unit or fingerprints are sure to show up after installing it. 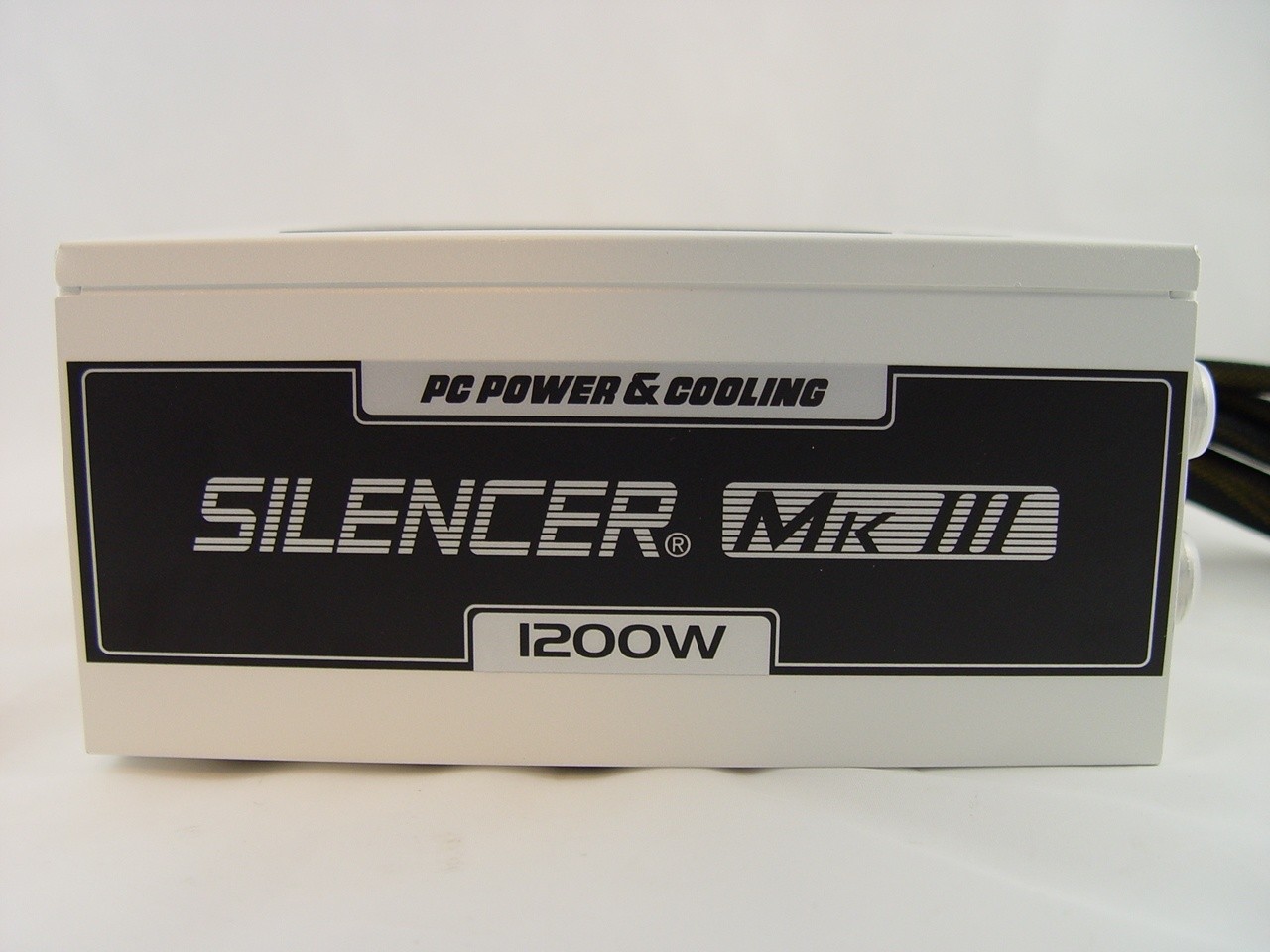 Both sides feature the same logo, just inverted on the opposite side. 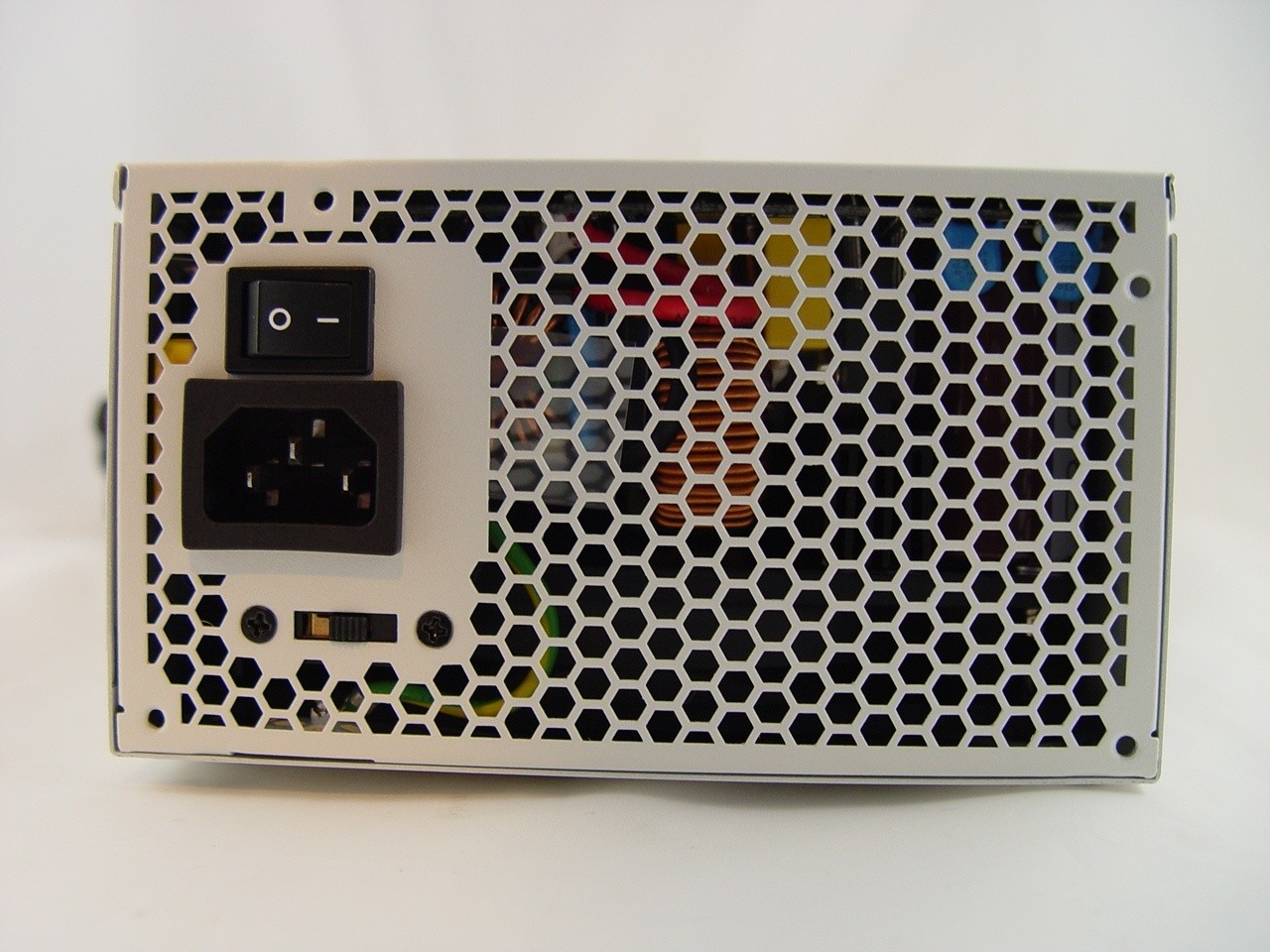 The back is standard with the honeycomb venting as well as the AC input and on/off rocker switch. The switch below is for selecting the fan mode that we spoke about earlier. The only complaint we have about it is that it isn't labeled in any way. 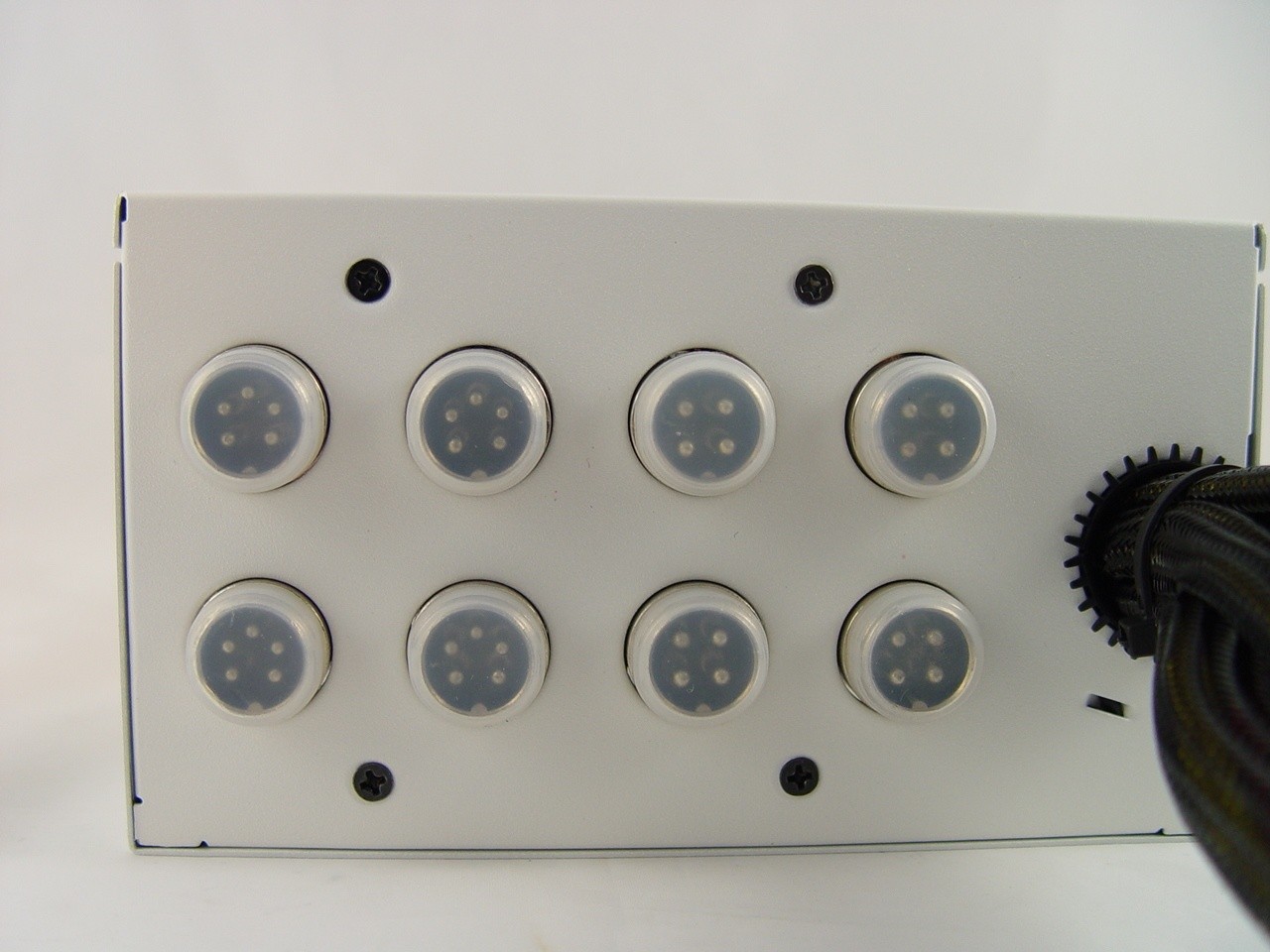 On the front of the Silencer Mk III 1200W, we find the modular connectors with covers on them. There are four for peripheral cables and four for PCI-E cables. Rather than snapping in place with plastic connectors, PC Power & Cooling chose metal connectors that screw on tightly. It is said that is said to provide better and more stable electrical connectivity than regular plastic modular plugs. 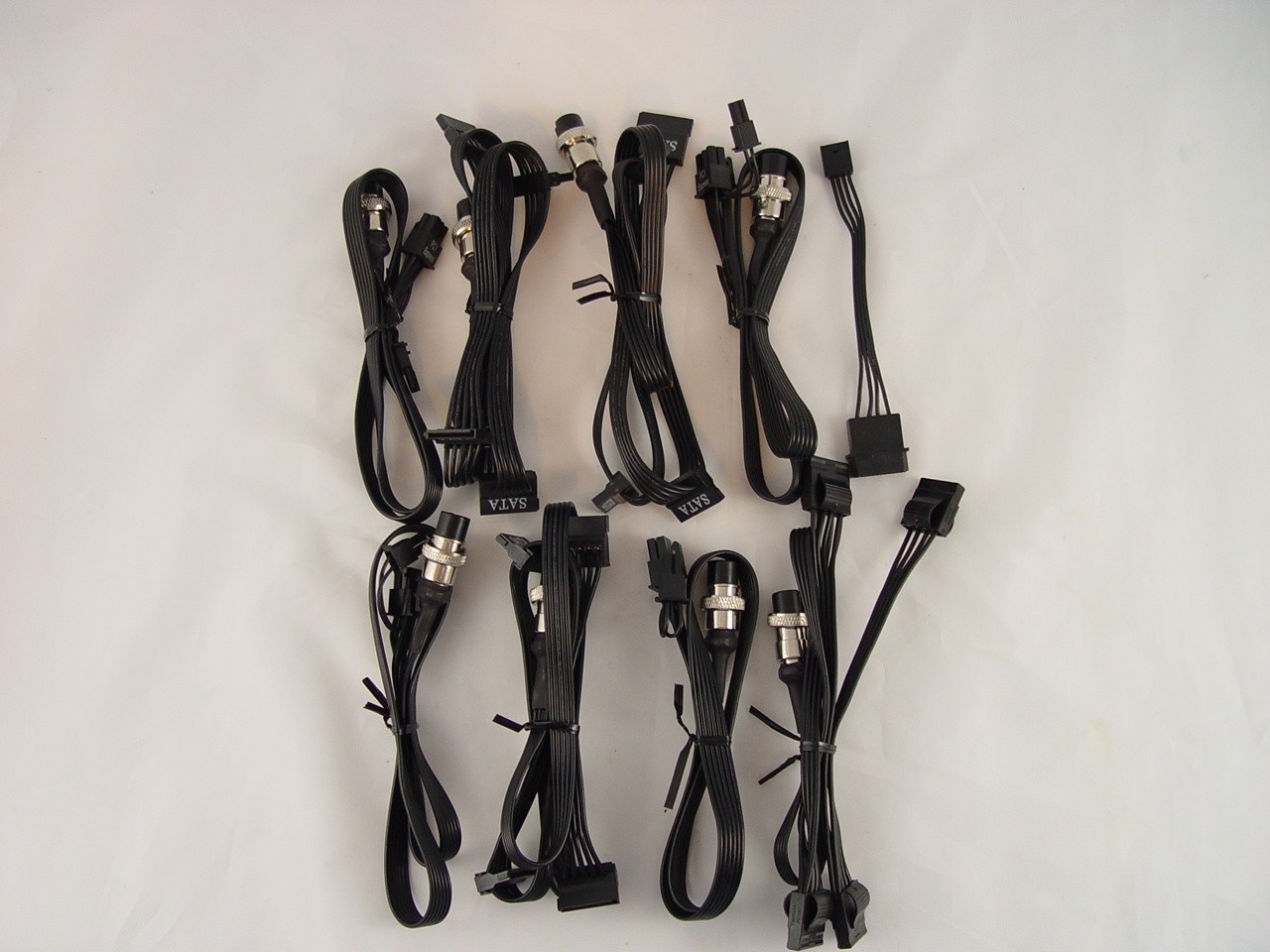 All modular cables are flat which should provide for easier routing and increased airflow within the case. 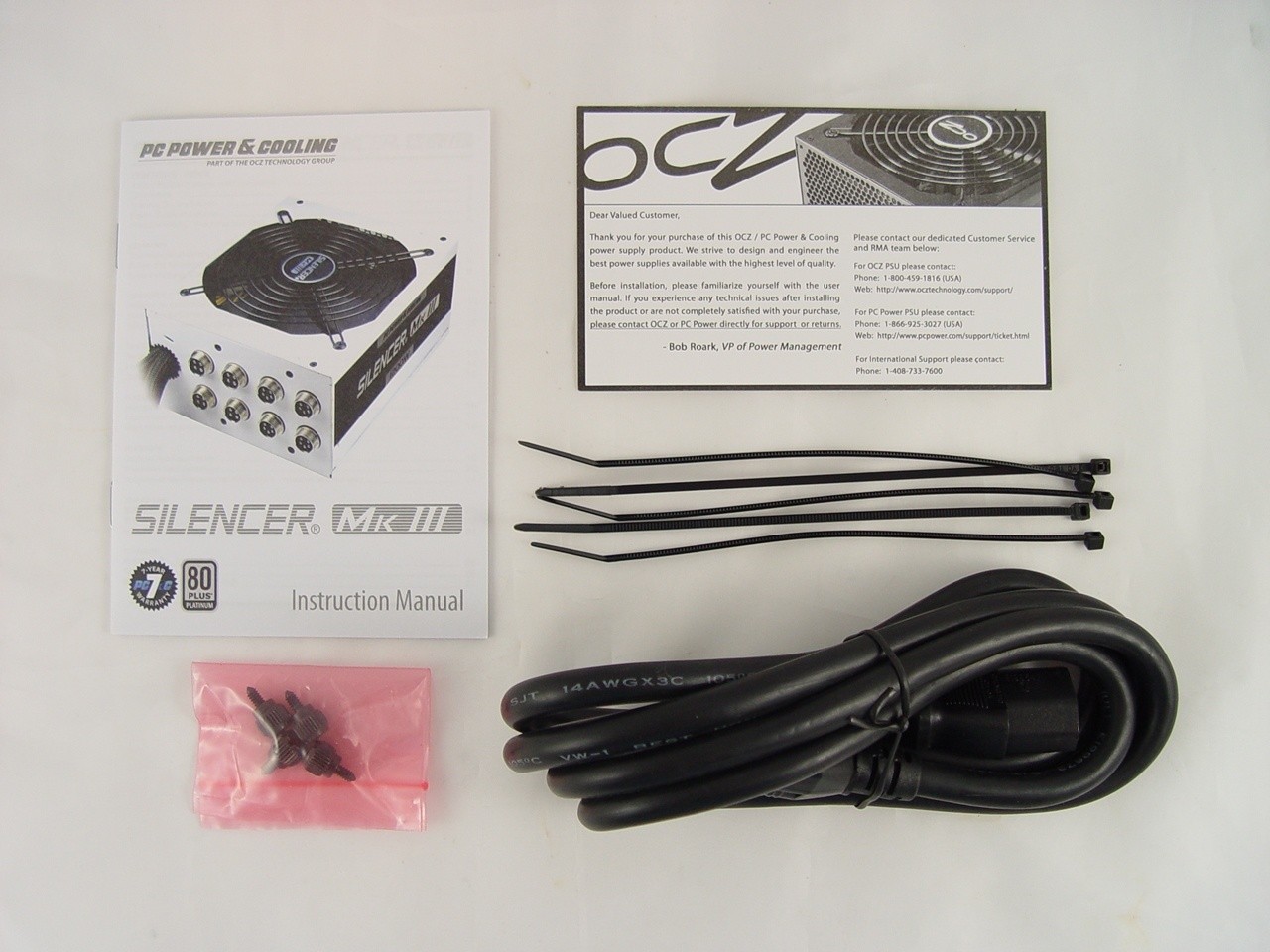 The Silencer Mk III does a very good job of providing plenty of cables and connectors to choose from. Native cables include that of the 20+4 pin Main, two ATX 4+4, and two PCI-E 6+2 pin cables. Modular cables are provided in the form of four more PCI-E 6+2 cables, three SATA cables with four connections each, and one Molex cable with four connectors. To ensure that legacy equipment can be used, there is also a Molex to FDD adapter included.

It would be nice to see some varying lengths in the cables as well. As we all know, you can't have three video cards exactly 23 inches from the power supply and trying to tuck some of that excess cable can be a pain. The same holds true for the peripheral cables as well and there are often times that just a pair of SATA connectors are needed and of much shorter length than offered. 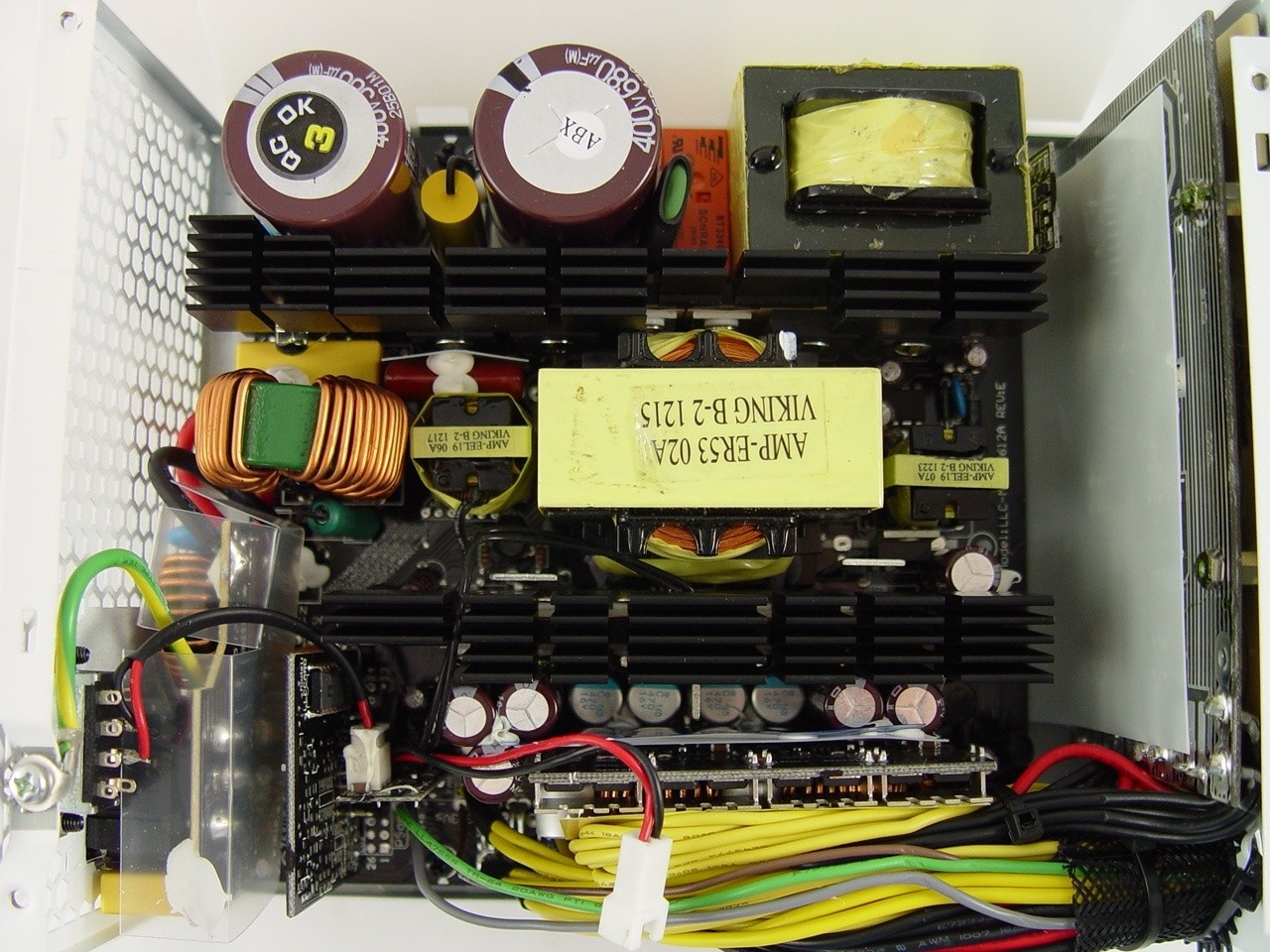 Opening the power supply, we find a pair of heatsinks that run the length of the unit. These provide the passive cooling for the unit while still allowing fresh air to permeate through to most of the components on the PCB. 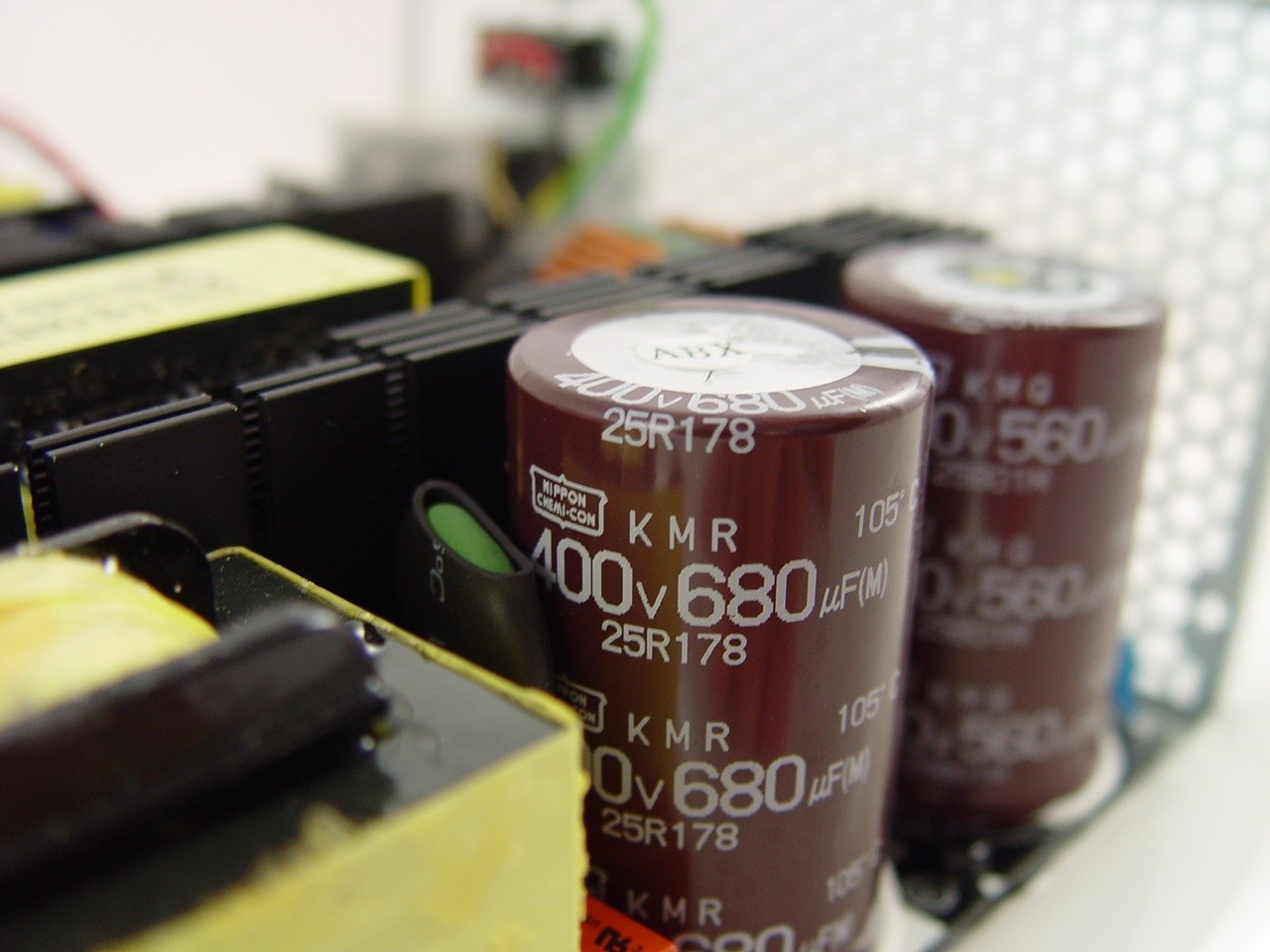 A pair of Nippon Chemi-Con capacitors reside on the primary side of the Silencer Mk III 1200W power supply. 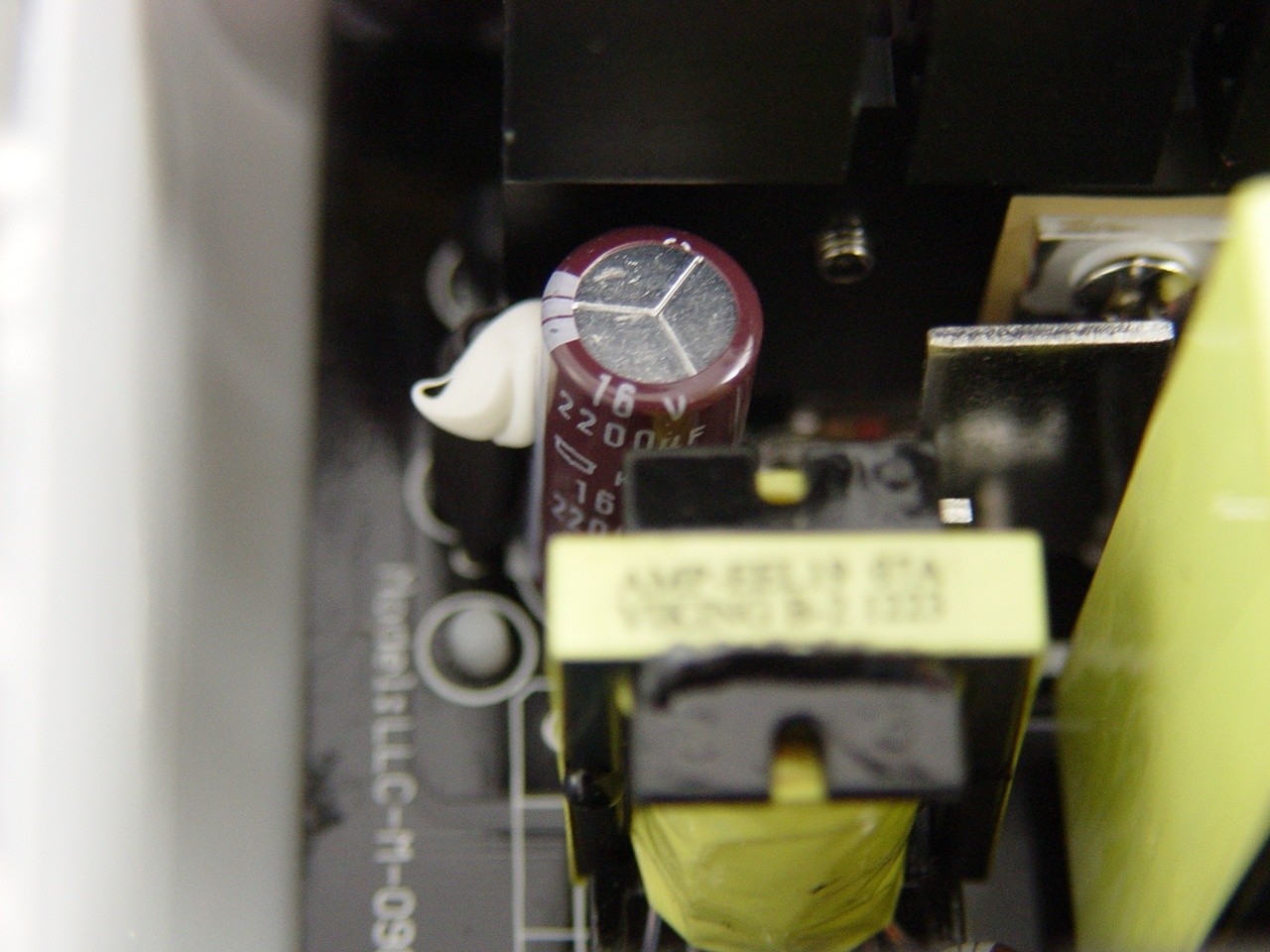 More Nippon Chemi-Con capacitors are soldered in on the secondary side as well. 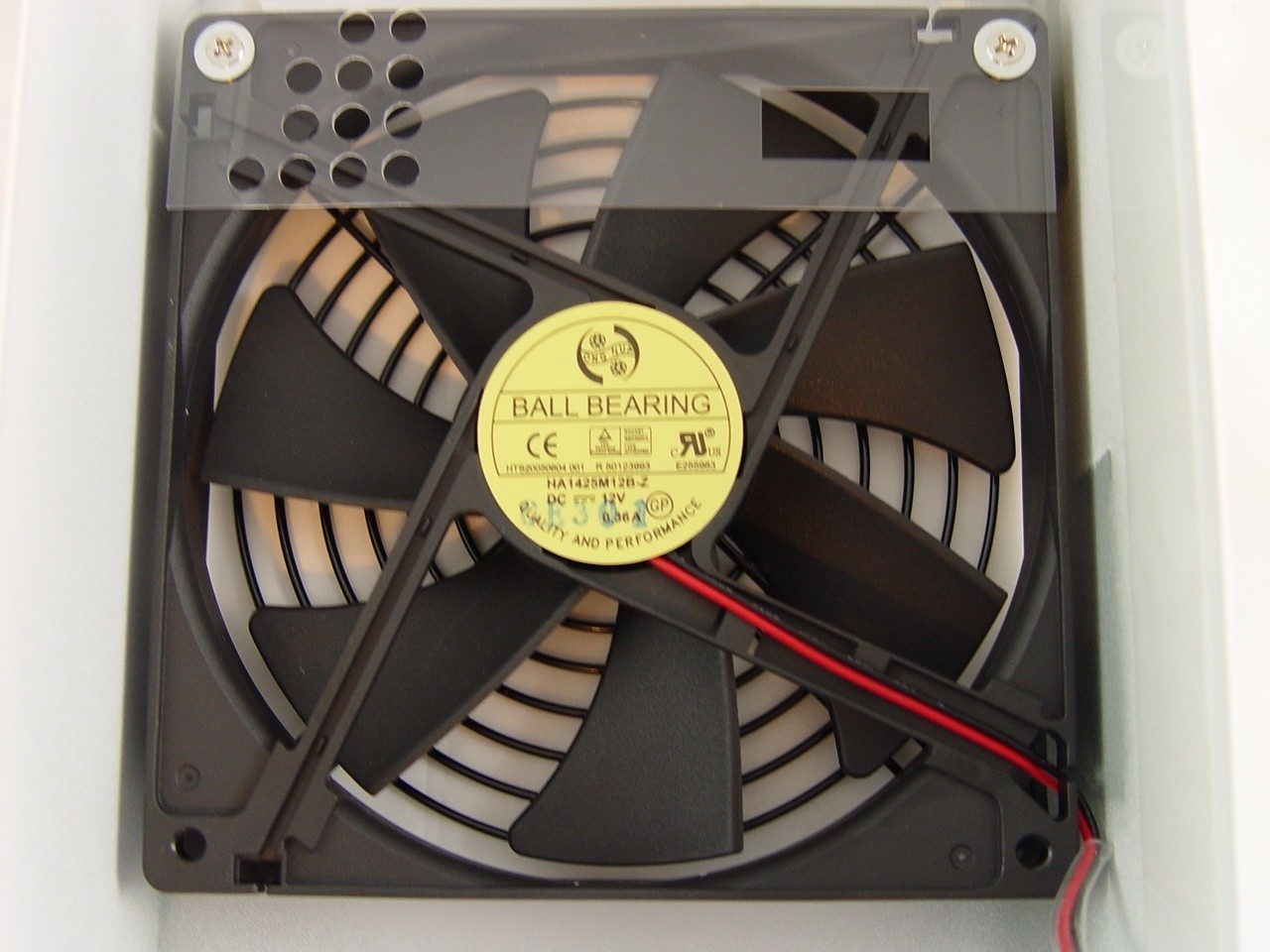 The tests performed are based around six conceivable setups that are out there and progressively load down the PSU up to the power supply's limits or 1000W, whichever comes first. Since our test equipment's limits are lower than that of the PC Power & Cooling Silencer Mk III 1200W power supply, we can only test it to 1000W.

DC Output quality for the Silencer Mk III 1200W was excellent and well within specification. During Test 1, we saw 13mV of noise on our scope. When we increased the loads in Test 3, the ripple climbed to 18mV at a little under half load. During Test 6 under a load of 1000W, the oscilloscope showed a maximum of 28mv on noise on the 12Vrail.

At 1200W the Silencer Mk III 1200W is the highest wattage Silencer series power supply to come to market. As such, we expected not only lots of power, but quality throughout with great performance. As the results above show, the unit does not disappoint on either of these. Voltage regulation is fantastic from start to finish with all rails at 2% across the board. DC output quality is just as fantastic as noise seen on the 12V rail is under 30mV at 1000W. Let's not forget about the efficiency of the unit either as Platinum efficiency at 1200W isn't an easy task. There are very few Platinum rated power supplies available above 1000W, but OCZ is now on the list.

There are some minor issues with the unit, but nothing that will be a deal breaker to most. The relatively low combined output of the minor rails will limit some heavy overclockers, but shouldn't have any impact on those who run everything at stock speeds. What still shocks us the most though is the lack of Over Temperature Protection within the unit. It confuses us even more since temperature is already being monitored in order to control the fan speed.

All of that aside, there are two really strong points that the Silencer Mk III 1200W has going for it. One of which is the seven year warranty. It is great to see the warranty stepped up for the 1200W model as it is going to be a power supply you keep around for quite some time. The other is the price tag of $299.

This makes it the cheapest 80 Plus Platinum rated power supply in the 1200W and above category and that's something to brag about. 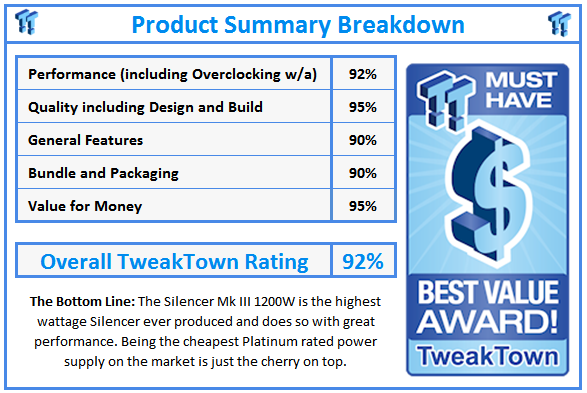