I sit here utterly confused about Rock of Ages. It's a film that tries to be as sweet and inoffensive as possible, where Rock and Roll is utterly anything but. It's a film that has hard rockers sing the softest rock and roll song of all time, "We Built This City", ups the glam factor and completely guts the sex and drugs. This is a family musical through and through, and totally distances itself from that which the film pretends to stand for.

On paper, the film seems to tick the right boxes, and the film does a few things right. I wanted the charismatic leads to fall in love, I tapped my toes enthusiastically and to the horror of the cinema audience, I even sung along a few times. But is that enough? Ultimately, there's a massive hollowness to Rock of Ages that not even Tom Cruise can save.

The year is 1987. Attracted by the glitz and glamour of Hollywood, small town girl Sherrie (Julianne Hough) arrives in California and is promptly mugged, losing her prized record collection. Bartender Drew Boley comes to her aid, but is unable to catch the thief. When he strikes a conversation with Sherrie he becomes instantly smitten and finding she is jobless and alone, arranges to gain her employment with him at The Bourbon Room - the most popular spot on the Sunset Strip.

Drew is a wannabe rocker just waiting for his chance to shine, which is promptly chanced for the opening act for the final performance of Stacee Jaxx's (Tom Cruise) band Arsenal. Drew and Sherrie fall in love through their shared love of Rock and Roll, but Drew's rising stature threatens their relationship and the complications involved with the notoriously difficult Stacee Jaxx.

The Bourbon too is facing its own difficulty, at risk of foreclosure by Mayor Whitmore (Bryan Cranston) and his rock hating wife Patricia (Catherine Zeta Jones) who wants to drive them from town.

It's difficult to be really hard on the film, because I feel it really does try to please the audience. Unfortunately, it just falls short along the way.

Musicals work best when the music propels the story forward, essentially telling the story through song. But this doesn't really seem to happen, with the majority of songs ill fitting and stopping the film dead. And at two hours in length, it's just way too long. 30 minutes could have been cut out and the film would certainly be better for it.

The performances across the board are generally of a good standard, and although it is clear that much of the singing has been dubbed in post, apparently all the leads perform their own songs. I particularly enjoyed seeing Catherine Zeta-Jones return to the musical world (in an ultimate universe she would be a revered stage star), and Tom Cruise is strong as Stacee Jaxx. However, the problem is that no one in the audience really takes it all seriously. It's always Tom Cruise, and never Stacee Jaxx.

The direction by Andrew Shankman is workmanlike and proficient - the problem lies with the script, which is so tired and cliche'. It feels so familiar because it's been done to death and has no real surprise. The musical has made a comeback of late, thanks to shows such as Glee, but this requires theatrical productions to up the ante. Unfortunately, Rock of Ages does not and you can't help but wonder if this is a multi-million dollar film, or made for TV filler.

Ultimately, Rock of Ages tries pretty hard to endear itself to its audiences, but it's just so riddled with poor choices that it's hard to fall in love with it. When it hits Blu-ray and DVD later in the year I'd encourage you to give the film a chance - your experience may differ, but for me, I think once was by far enough. 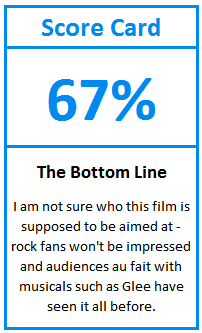