After 50 years of filmmaking, Steven Spielberg tackles a brand new genre - animation. However, true to form he wouldn't settle for directing any old traditionally animated picture, instead pushing the technology of motion capture computer generated animation to heights never before seen. He's also joined by Peter Jackson (you might have heard of The Lord of the Rings) acting as the film's producer. A powerhouse duo of this caliber hasn't been since the joining of George Lucas and Steven Spielberg which resulted in Indiana Jones - which this film desperately attempts to emulate. But can lightning strike twice for Spielberg?

Based on Herge's long running magazine serial and subsequent animated TV show, Tintin has amassed a local following of all ages (shout outs to my friends Renee and Nathan) and has been on the Hollywood radar for many years, with some disagreement on how best to translate it. Finally, the stars have aligned and the first of what will presumably be a series of films has made its way to cinema screens.

When young journalist Tintin (voiced by Jamie Bell), accompanied by his trusty companion Snowy purchases a model ship from a street seller, he gets more than he bargained for when he's followed by shadowy figures who want the ship for themselves and will stop at nothing to retrieve it. The ship holds the secret to a generations old mystery of great riches.

I failed to really click with Tintin. I wanted to like it - I really did. The trailers looked great and it seemed like a welcomed return to the adventure serials of old. Unfortunately, several aspects of the film really rubbed me up the wrong way and I felt bored and found myself looking at my watch way too frequently.

I love animation, but it has its place. Generally, stories are told in animated form because they are inherently too difficult, or costly to achieve practically. In no way did Tintin need to be animated. Worse, the weird mesh of styles is somewhat uncomfortable and bizarre. The backgrounds and set pieces are for the most part ultra detailed and life like. Herge's characters are generally depicted with outrageous features such as freakishly large noses or other defining features.

Tintin himself is very realistic, but placed next to the character of Archibald Haddock, looks strange and suffers from a large case of uncanny valley. It reminds me of an image produced by the blog Pixeloo of Super Mario depicted as a real life character which went viral a few years back. I respect that Spielberg and Jackson wanted to remain true to Herge's original designs, but I think it was unwise to merge the two worlds together.

The film is heavy on exposition and explanation and although I concede that it would likely be more comfortable and straightforward to audiences who are already familiar with the Tintin stories, this is first and foremost a movie - not a literal translation of the books. I also found the film to be very lopsided in its storytelling - rush from action sequence A, to action sequence B, insert exposition, rush to action sequence C and then cram in some more plot. It felt like movie making by numbers and I failed to feel the guiding hand of two of the most talented and experienced directors working in Hollywood today. Maybe it's a reflection that Spielberg left to direct War Horse and Peter Jackson left to return to the world of The Lord of the Rings.

Despite its family friendly boxing day theatrical release and association with school libraries everywhere, Tintin: The Secret of the Unicorn is hardly a kids film, with a dark tone, recurring alcohol consumption, gun battles resulting in multiple deaths and a confusing plot that will completely go over the head of the littlies.

Ultimately, Tintin is an amazing technical experience, but a calmer pace with some more breathing space, less exposition and a bit more genuine heart and soul would have gone a long way. But by all means, try again, I genuinely want to see a bigger, better Tintin experience in the near future. 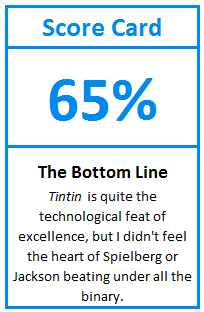