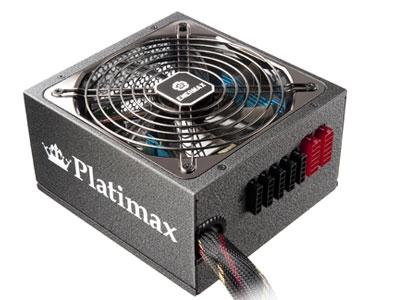 Enermax is well known amongst the enthusiast community for their quality power supplies inside and out. The examples we have seen in the last year with the MaxRevo and the Modu87+ were no exceptions, so when Enermax offered us the chance to get an early look at their upcoming Platimax unit, we gladly obliged. Enermax already has several Platimax power supplies available and we've heard that the 600W model will launch sometime in January 2012.

The new Platimax 600W power supply boasts a lot of features that make it sound great on paper. Platinum efficiency, 100% Japanese capacitor construction, 600W of multi-GPU ready power, SpeedGuard, SafeGuard, HeatGuard, CordGuard and so much more. All of this doesn't mean a thing if the power supply can't back it up where it counts.

Keep reading to find out more about the Enermax Platimax 600W and how well it performs.

One of the first things that many will notice is that the Platimax 600W has three 12V rails. Those familiar with Enermax power supplies know that Enermax often uses some very unconventional rail distributions, but they work very well. Each of the three 12V rails are capable of 25A each with a combined total load of 50A. The two minor rails are capable of 20A each and share a combined maximum output of 100W. 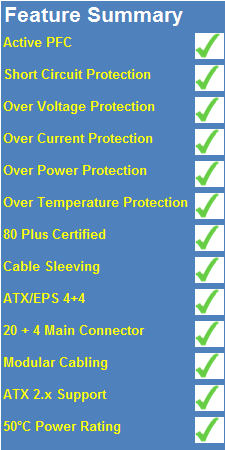 One of the things you can always count on from Enermax is that the power supply is loaded with features. The Platimax line is no exception and we have a fully checked feature list to prove it. There is a full complement of protections, including a few we don't check for such as Surge Inrush Protection and Surge Current Protection. All of the cables are fully sleeved and the only native cables are those that are required regardless of the computer it is installed in.

Enermax power supplies are easy to come by due to their excellent market penetration. You'll be hard pressed to come across a Platimax 600W in the wild right now as they aren't available, but there are other Platimax models ready available. As soon as the 600W launches, it will be available as well. We've heard that the Platimax 600W will launch with a hefty $180 price tag. Enermax will be backing the Platimax 600W power supply with a five year warranty. 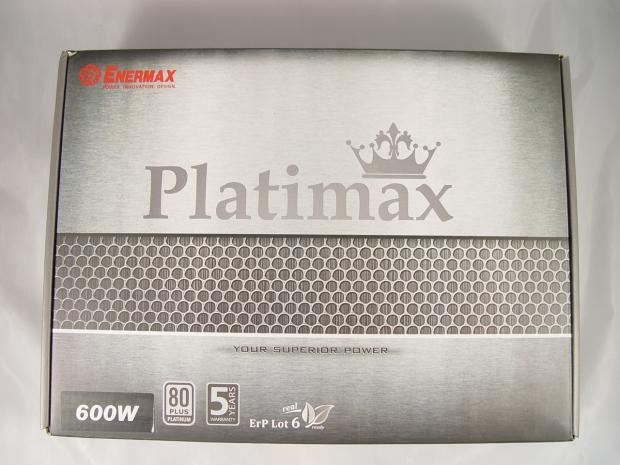 Enermax is trying really hard to get the Platinum feeling with the Platimax PSU. There is little information on the front other than wattage, warranty, and the 80Plus Platinum logo. 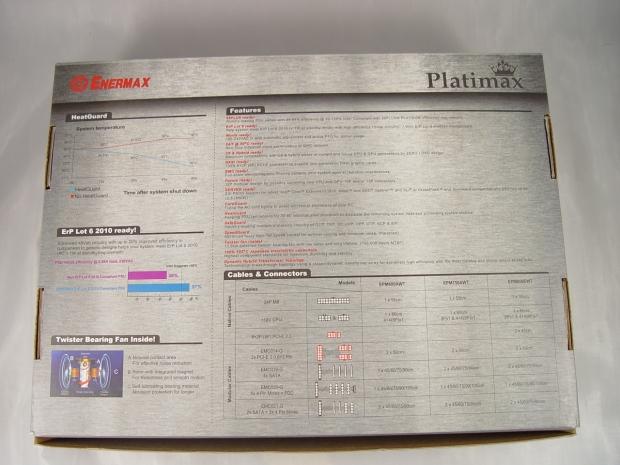 Taking a look at the back of the box, we find a long list of features and a great cable and connector availability chart. 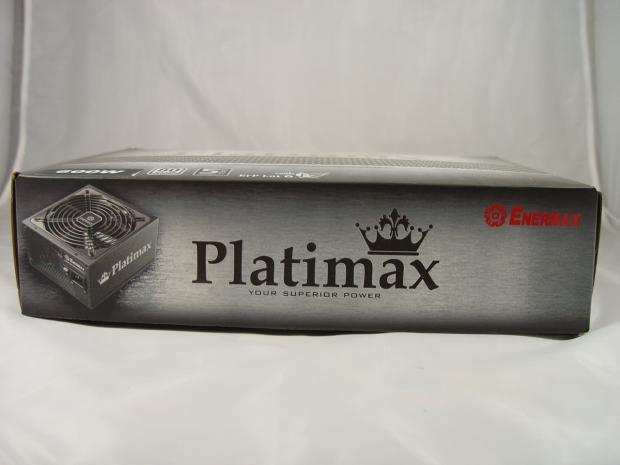 The top of the box contains no information at all. 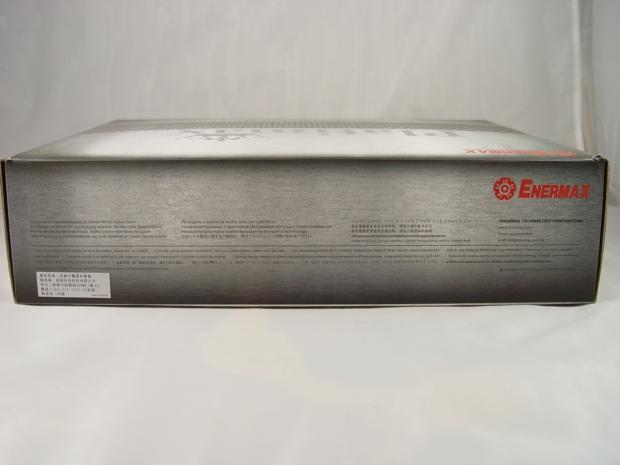 The bottom contains a few pieces of contact information. 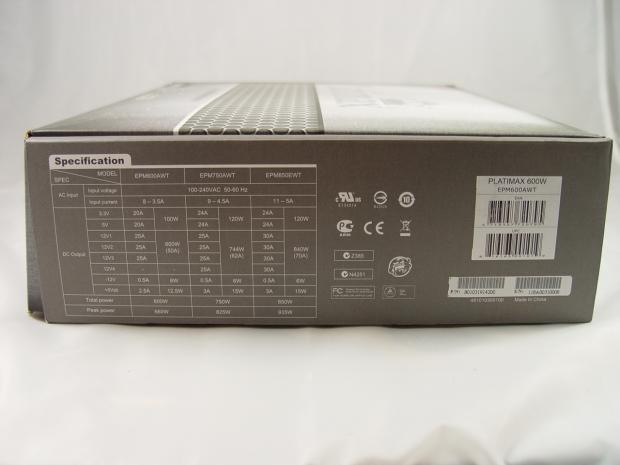 One side of the box displays the I/O specifications for several of the Platimax power supplies. 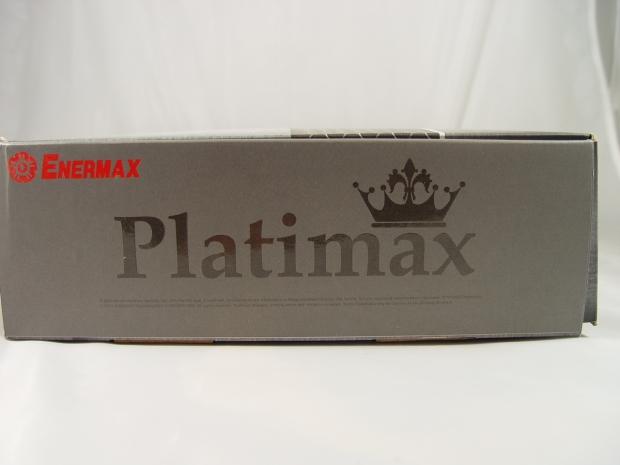 The other side is lacking any useful information just like the top. 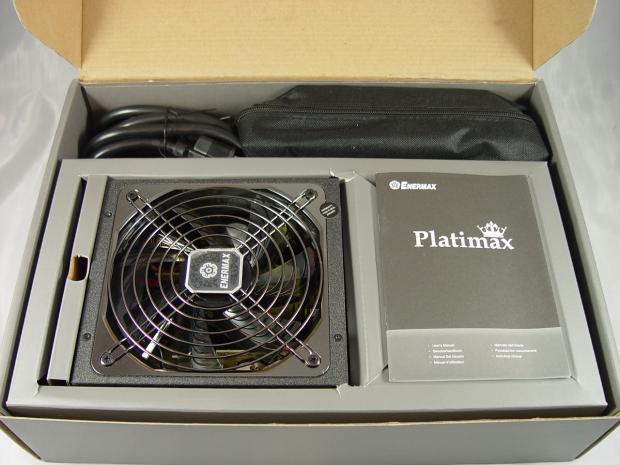 The Platimax 600W power supply is packed a bit different than we are used to seeing. It simply sits inside a cradle of cardboard. As you can see from the picture, there is some damage to the cardboard surrounding the corners of the power supply. The cardboard has obviously done its job as there was no damage to the unit itself. 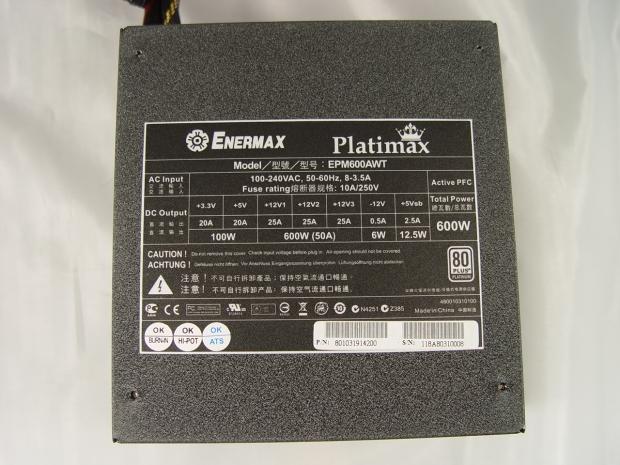 Enermax tucks the I/O specification label on top of the power supply so that it is hidden while installed. 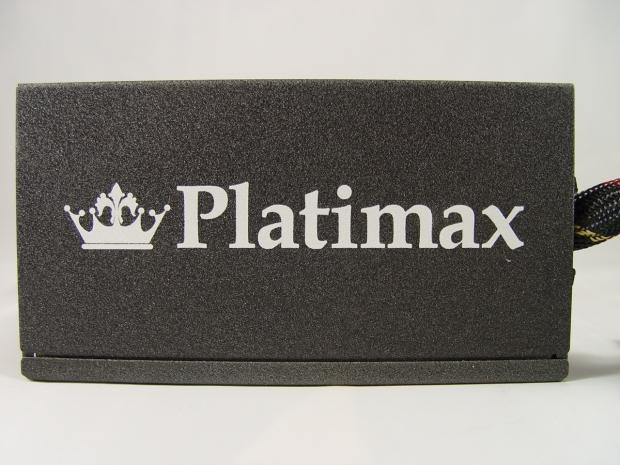 Both sides of the power supply display the Platimax logo. 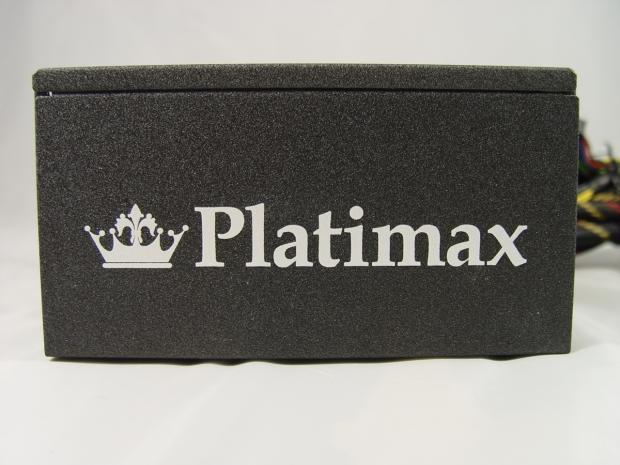 One side is printed upside down so that it is displayed correctly when installed in the bottom of a case. 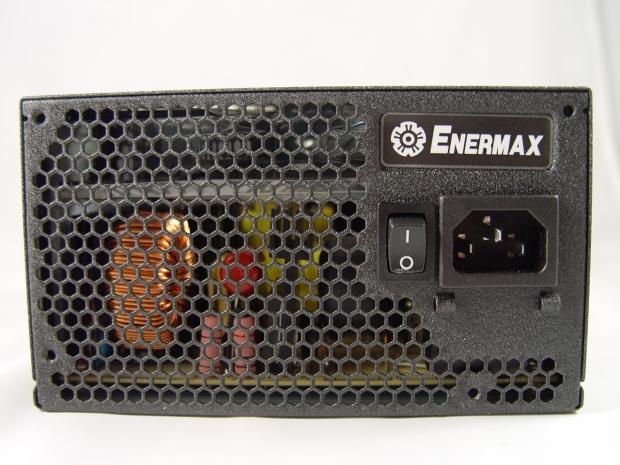 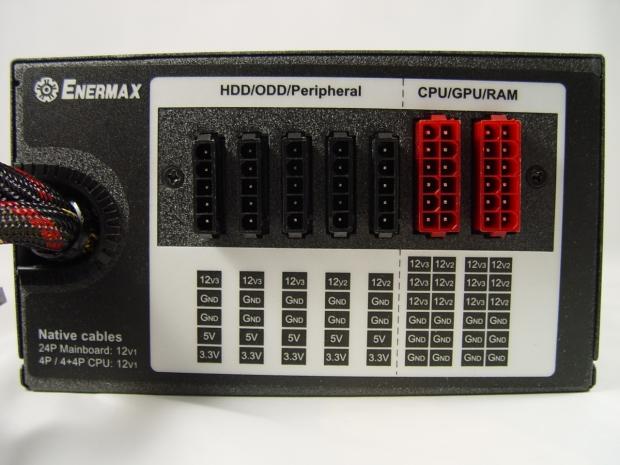 The front houses the modular connectors for the Platimax 600W unit. This is by far the best documentation we have ever seen concerning rail distribution. More importantly is that it is documented on the power supply itself so that two years from now you don't have to track down the manual when you rebuild the computer. 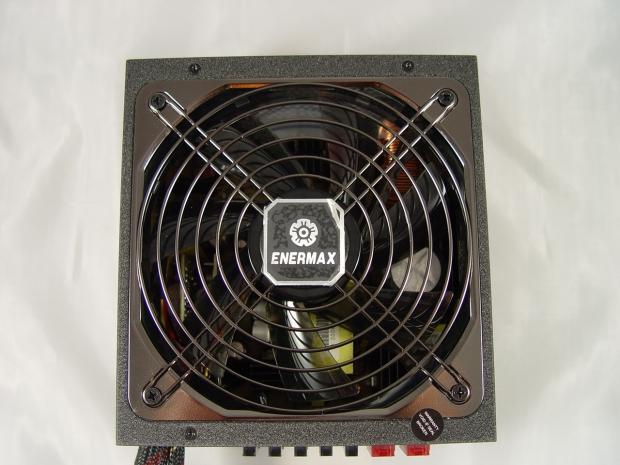 On the bottom, we find the 140mm fan with wire grill that cools the Platimax power supply. 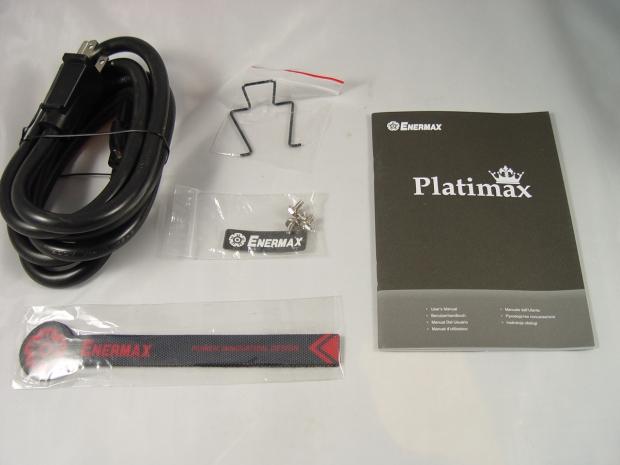 Also included inside the box are the user manual, AC power cord, mounting screws, velcro cable ties, an Enermax sticker and the CordGuard used to secure the power cable to the power supply. 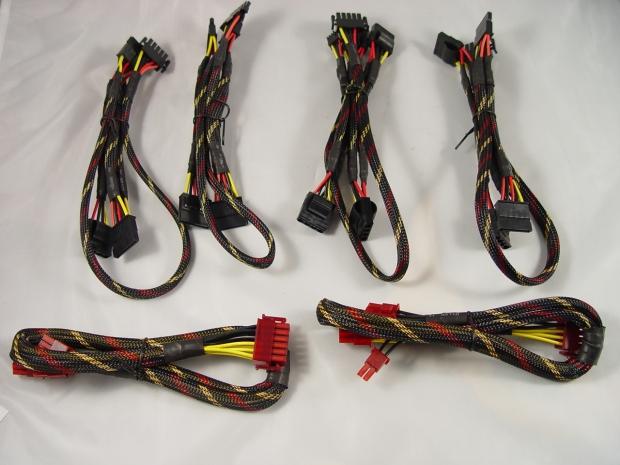 Rounding out the inside of the box are the modular cables for the unit.

Enermax always does a great job of cable selection and connector availability and the Platimax 600W is no different. The only natively wired cables are the Main and ATX4+4 cables. The pair of PCI-E cables break out to two PCI-E 6+2 pin connectors each. Peripheral connectors are handled via four cables that give eight SATA, eight Molex, and one FDD connector.

As was noted at the start, Enermax always uses rail distribution that strays from the norm. This layout ensures that there is some form of rail distribution anytime something is plugged into one of the CPU/GPU connectors. 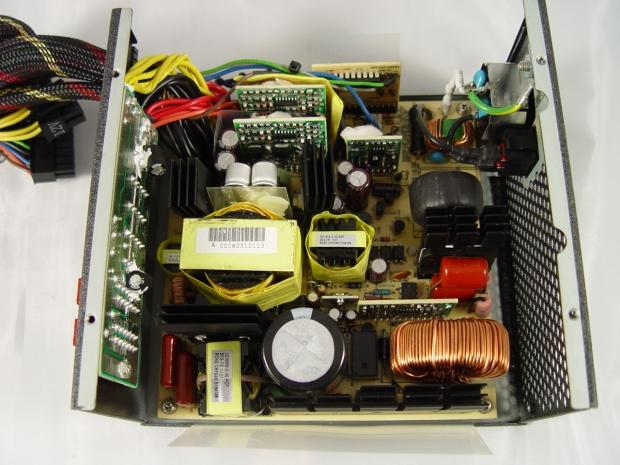 Opening up the unit, we find a very well laid out power supply with lots of cooling wherever it is necessary. 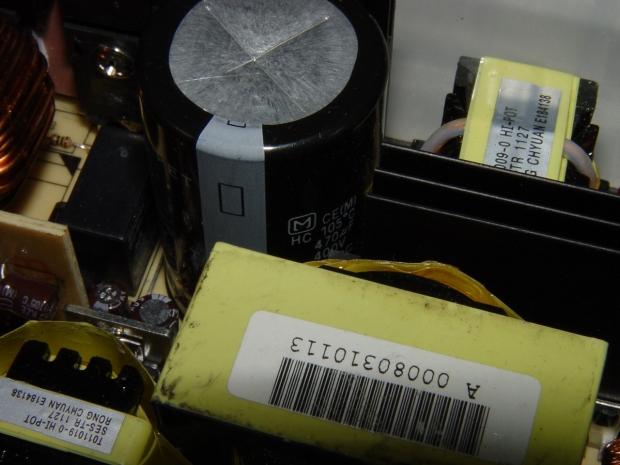 There is a single Panasonic capacitor on the primary side. 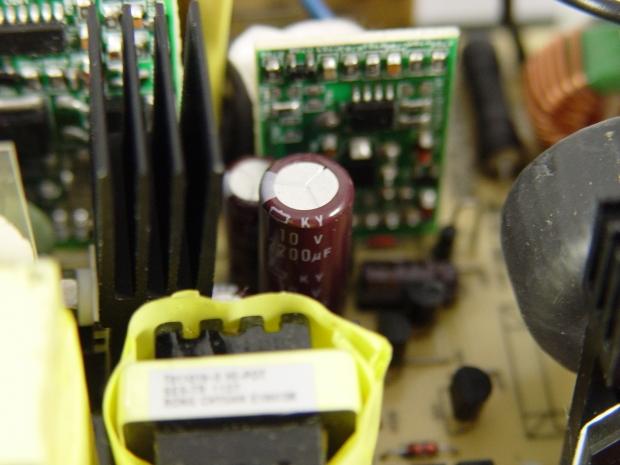 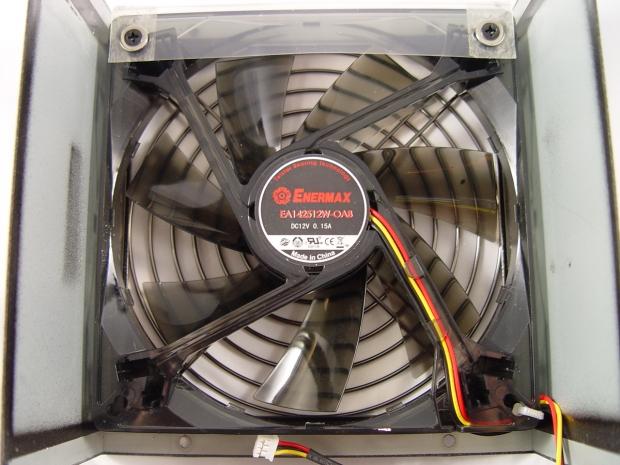 The tests performed are based around six conceivable setups that are out there and progressively load down the PSU up to the power supply's limits or 1000W, whichever comes first. Since our test equipment's limits are higher than that of the Enermax Platimax 600W, we can test it to the maximum.

One of the strongest areas of Enermax power supplies has always been their spectacular voltage regulation. Our Platimax unit didn't disappoint on this front and managed to keep all of the rails within 2% of specifications with the exception of the 3.3V rail. The 3.3V rail started off at 3.37V which pushes it just barely into the 3% regulation range.

We were a bit worried when we started looking at the DC Output quality of the Platimax 600W as it started off somewhat higher than what we are used to seeing during the first test at 21mV. Our worries were quickly put to rest as we increased the loads to Test 2. The ripple seen on the scope barely changed and it increased to 24mV.

As we increased the loads even more to Test 3, we saw another marginal increase in noise up to 28mV. Once we fully loaded down the unit we were happy to see that there was still less than 30mV of noise on the 12V rail. The Platimax 600W power supply displayed one of the best noise deltas from start to finish that we have ever seen.

The Enermax Platimax 600W carries an 80Plus Platinum certification with it. This means that it must be 90%/92%/89% efficient at 20%/50%/100% loads respectively. Things started off great during the first test and the unit wasn't even close to being on the bubble. Test 2 shows that the unit was right on par with where it should be, but efficiency started dropping right after that. During the full load test we see that while the unit was passing, it was starting to cut it a little bit close.

Enermax has done a fantastic job with the Platimax 600W unit. We've tried to find things to complain about, but there just wasn't anything that stood out. Performance was fantastic from the unit as the voltage regulation was great and the efficiency numbers held up from start to finish. The power supply even had some of the most stable ripples we have ever seen from start to full load. It has a full set of features to make almost any enthusiast happy, looks great and is backed by a five year warranty.

About the only thing many will complain about is that the unit will come to market with a very hefty price tag for a 600W power supply. Enermax units have always had a little bit of a price premium and it is all the reasons listed above that make their units worth the extra cash. Add in that this is an 80Plus Platinum unit and the efficiency coupled with the ever increasing costs of electricity and this unit will likely pay for itself rather quickly.

You'll definitely want to make sure you keep the Platimax 600W unit in mind if you are going to be in the market for a 600W PSU in the next few months. 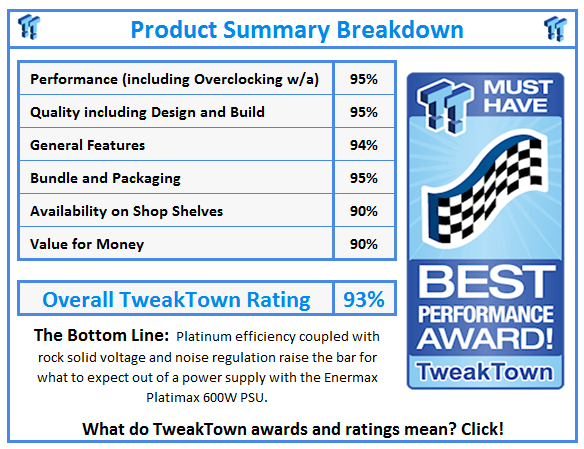